While I’ve barely had time to even think about blogging in the last few weeks, I didn’t want to see 2013 draw to a close without doing a roundup of my sewing and knitting projects from the year. I did one last year, and it was interesting reading the goals I set for myself this year, some of which I accomplished (namely, focusing on separates, as you’ll see).

I think the best part of what I accomplished this year was that I managed to sew a bunch of things that, by and large, I’m really happy with! I tried to only start projects because I really wanted to work on them, which meant I was pretty pleased with the results in the end. This isn’t exactly the same with knitting since some projects take a phenomenal amount of time and I need breaks between working on them, where sewing is much faster. But on the knitting front, I’m very happy with the few sweaters I did finish this year.

Let’s see how my year went!

Ahh, photo montages, AKA “see all the ways you figure out what to do with your hands in photographs.”

Let’s take a closer look, shall we?

My 2013 garment sewing and knitting projects in chronological order 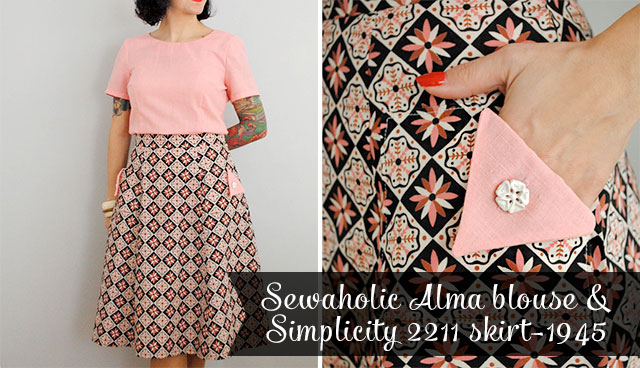 Sewaholic Alma #1 and Simplicity 2211 #1–I started off 2013 sewing an outfit, and it ended up inadvertently being a bit of a theme for a decent portion of the year. I’m not quite sure what possessed me to sew with this color palette, as pale pink isn’t something I wear a lot. While I love the vintage fabric on the skirt and the little convertible pocket flaps I added (with a semi-tute on Lucky Lucille), I didn’t wear this skirt a lot, even though I love it. The Alma blouse is the same, only because of the color. But it couldn’t have gone together better and I ended up riffing on the pattern later in the year. 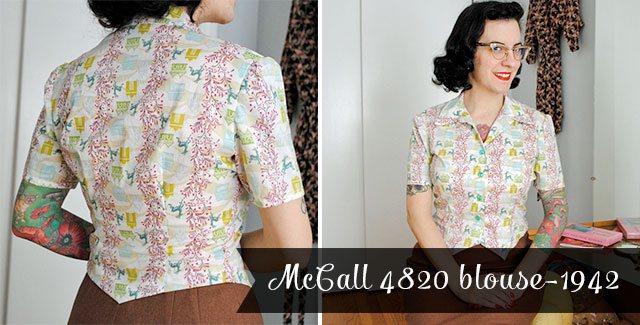 McCall 4820 #1–This was the first of three versions of this blouse I sewed this year, and I’ll continue to keep on sewing it as it’s now my favorite blouse pattern after some tweaks. The first version has the original pointed waistcoat shaping which I removed in later versions, as I prefer to tuck in my blouses. 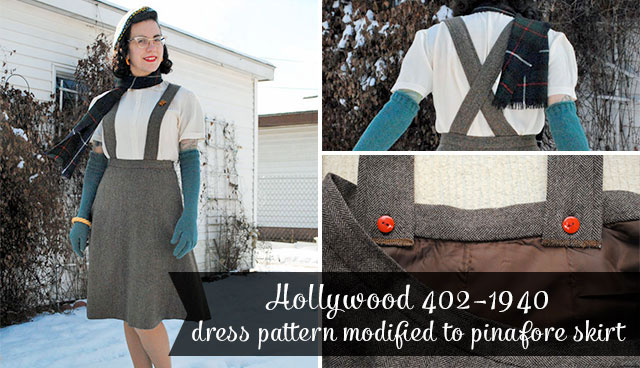 Hollywood 402–The pattern was actually for a dress, but I really wanted an 8-gore skirt and didn’t have a pattern for one, so I used this vintage dress pattern and drafted a waistband. This was the first time I lined anything! And since I couldn’t leave well enough alone, I also added pinafore straps, too. Frankly I’ve never worn it with the straps, but I wear the skirt all the time! It’s one of my favorites. 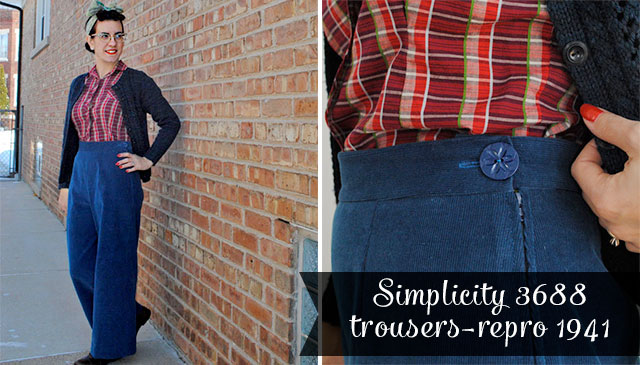 Simplicity 3688–I sewed these corduroy trousers for Sew Grateful week, and was very pleased with them. I wore them all the time last winter, but this fall and winter I’ve been on a big jeans kick, so they’ve sat unloved for awhile. I’m thinking next year I may try and make some cute summer shorts from the same pattern.

What I didn’t mention when I debuted the trousers is that the navy cardigan I was wearing them with, Olivette, is one I knit a couple of years ago, but didn’t wear a lot because I’d modified it to have box pleat sleeve caps and I decided I didn’t like that. So over winter I unpicked the set-in sleeves, ripped back the sleeve caps, did the math to re-knit the caps, and then set them in again. Now I’m much happier with it! 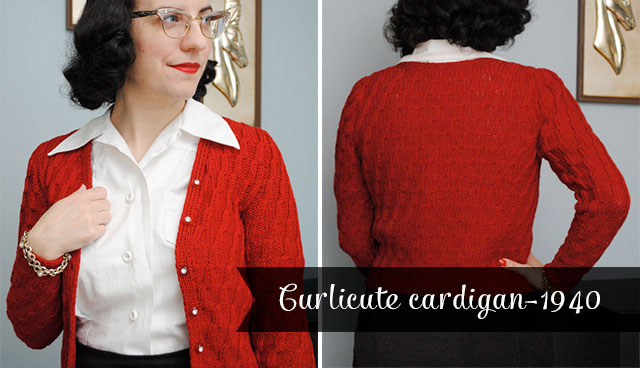 Curlicute cardigan–I don’t feel like I knit that much this year (even though I went on a knitting binge at the end of the year), and there was a huge gap between this sweater and the next one. I modified the gauge and knit this with a few inches of negative ease. I love the fit, and it’s a regular wardrobe staple. 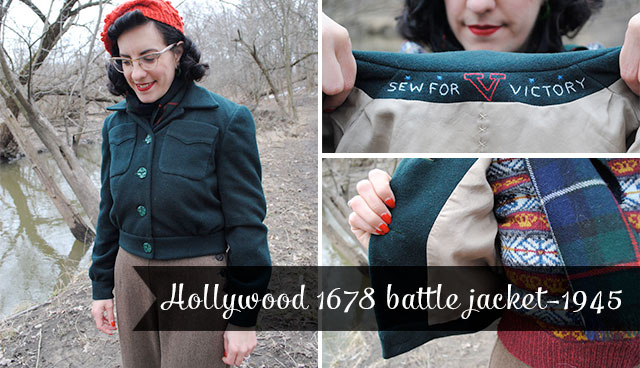 Hollywood 1678 battle jacket–If ever I had a sewing pièce de résistance, this is it. Who am I kidding, it’ll probably always be this! This was my project for Sew for Victory, during which I did a lot of details posts about sewing my first jacket (all tagged here). It was lined with rayon bemberg, had secret embroidery in the lining, handworked buttonholes, and I look at it and can’t even believe I had the patience for all the tailoring elements I put into it. I have to sadly admit I haven’t worn it much as it’s kind of the weight that works for about 4 days where I live, before I get too cold and want something longer. But I do love it so and it’s a huge sewing triumph for me. 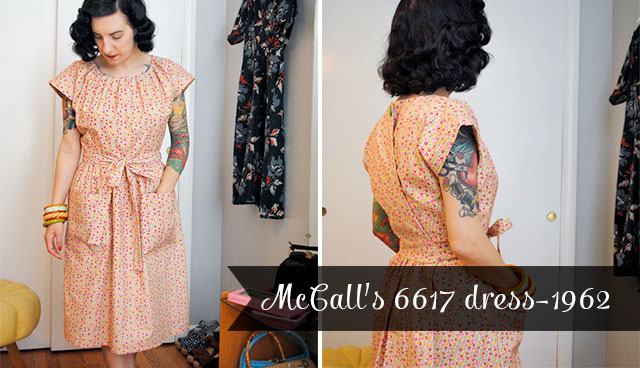 McCall’s 6617 wrap dress–I love this dress! Again with the light pink though. In fairness it was stash fabric that I wanted to use up to test out the pattern in my first go. And I love how it turned out. I planned at least two more that never materialized (including one with kind of a patchwork skirt), but I still have the fabric and plan to make them next year! 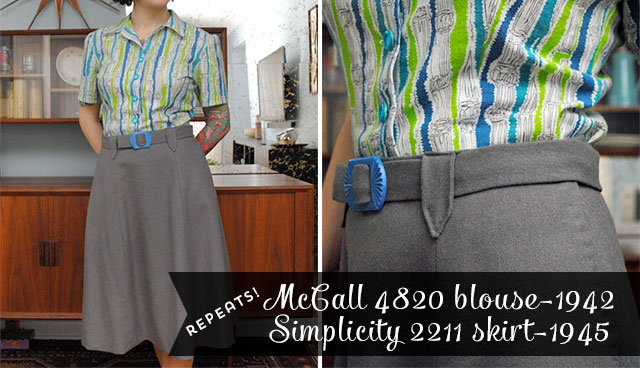 McCall 4820 #2 and Simplicity 2211 #2–Both of these are repeats, though they look completely different than the first versions. The blouse was made from a vintage feedsack, and the skirt is lined, and I made a belt and Western-inspired belt loops for it. Unfortunately the skirt is a little bit too big, so I’ve been debating if it’s worth unpicking the waistband and lining and taking it in a bit. I hate that kind of thing, so I haven’t done it yet. 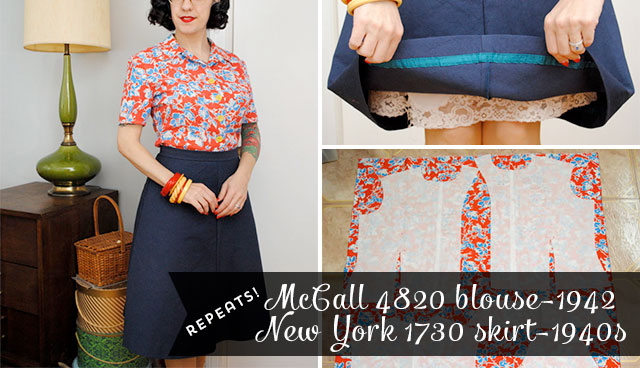 McCall 4820 #3 and New York 1730–Yes, another McCall 4820 from vintage fabric, immediately after the last one! This skirt was a repeat, but from a pattern I sewed in 2012. That version is a little big so I tweaked it this time and now have a perfect fit. I kind of hate sewing pieces on the bias so I’m pretty sure I said I wouldn’t do it again…but I probably will. 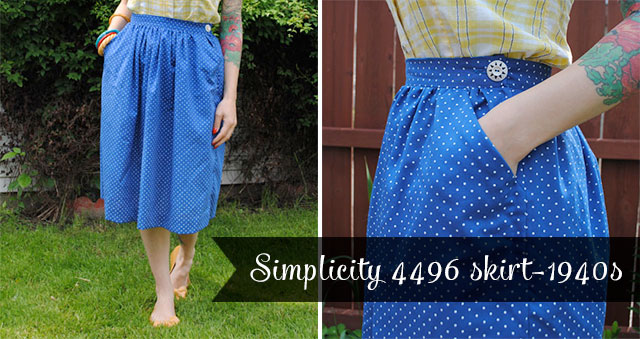 Simplicity 4496 #1–This is a simple dirndl skirt that I added inseam pockets to, drafted from the Sewaholic Cambie pattern. The fabric is a cheapo cotton blend from my stash and the polka dots can literally be smeared with an iron, but I still love the skirt and wore it a lot. I even later turned it into an outfit, as you’ll see shortly. 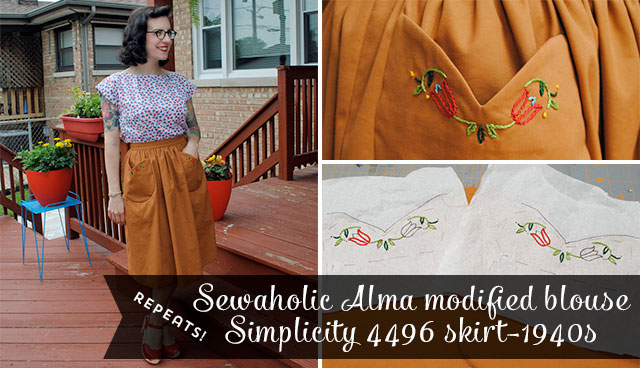 Sewaholic Alma #3 and Simplicity 4496 #2–At the time I debuted this outfit, I didn’t divulge the blouse was a modified Sewaholic Alma because I was planning a tutorial on how I did it! Note that I also said it was Alma #3 but didn’t show you #2, that’s because I wasn’t planning to show it until the tutorial. Well, next year, I promise. 😉 The skirt was a repeat of the dirndl pattern, and I added embroidered pockets (with a shaped and lined pocket tutorial here). 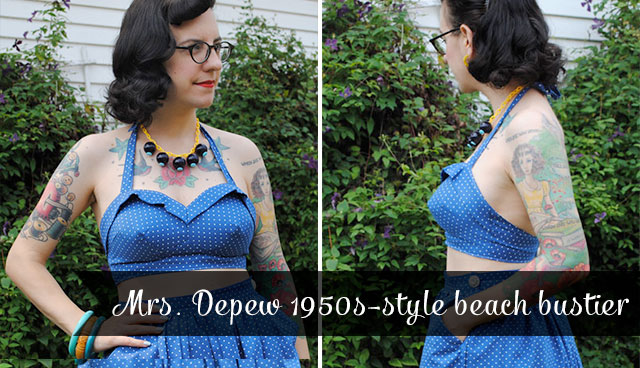 Mrs. Depew Patterns 1950s style beach bustier–As you can see, this turned my polka dot dirndl skirt into a set! I absolutely adore this top, and I plan to make more versions next year. 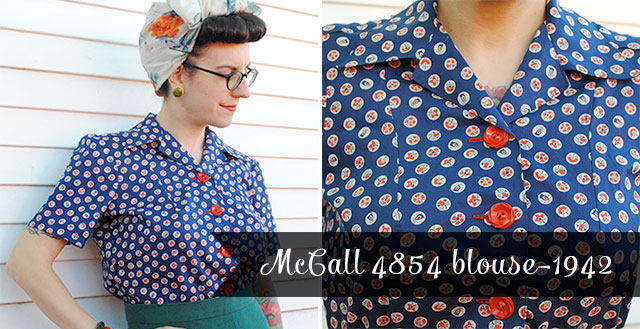 McCall 4854–This was my Fall for Cotton project, and in spite of an overall pleasant appearance and handworked buttonholes (which I did a tutorial for here), it’s the item I’m the least pleased with (but finished because hey, you have to finish something for your own challenge, right?!). This was actually the last thing I sewed this year, as I focused on knitting in the fall and winter. 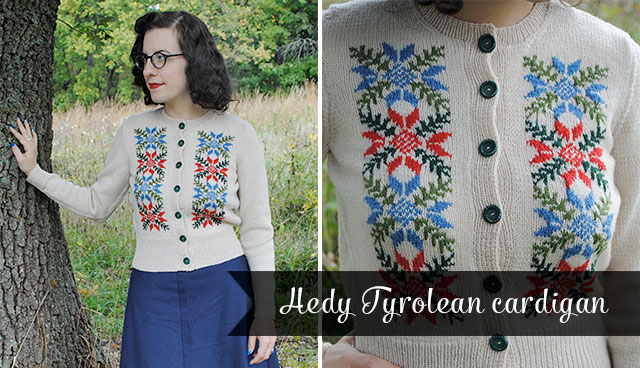 Hedy Tyrolean cardigan–And here we meet the knitting phase. I knit most of this cardigan in the early part of the year but the second intarsia panel nearly did me in and caused me to put it down for several months. I’m so glad I finally finished it at the end of summer. (Technically I finished this before my Fall for Cotton blouse but didn’t show it on my blog until after.) I absolutely adore this piece! Months later I can look back and actually say the intarsia was worth all the trouble. 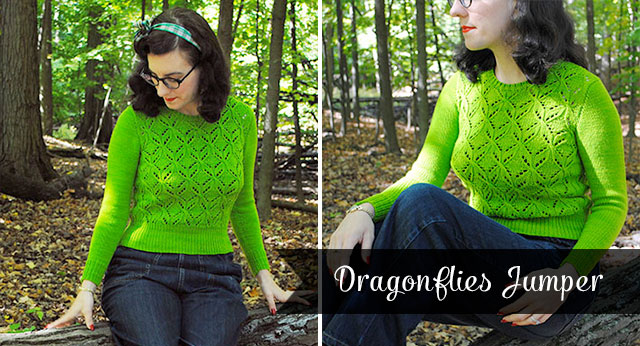 Dragonflies Jumper–Oh, I love this too! This was a major modification to the original design, which is a modern pattern that I gave a vintage look to. Recently I just won most favorited project from the designer’s knit-along on Ravelry! (Here’s my project page.) 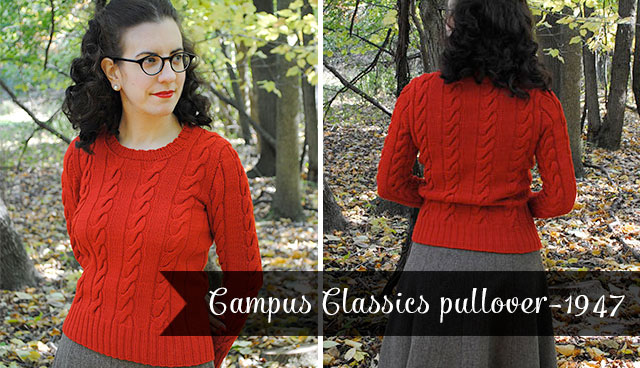 Campus Classics pullover–And last we have this pullover, knit from a 1947 pattern. I showed all the steps along the way for how I modified the fit and size with my 1940s pullover project. I wear this all the time, too.

I also had a couple of sewing projects I didn’t include in my roundup: a refashion for Portia’s Refashioners 2013, which was a men’s flannel shirt refashioned into a skirt, and the not-shown Alma #2. (Pssst, I’m actually wearing it with that refashioned skirt!)

I also didn’t include knitted accessories… there was a pair of socks, a few gift knits, a hat for myself (not blogged yet since I just finished it recently), and work on some knitwear designs. I have another couple of small patterns I’ll probably be releasing sometime over winter or early spring. And of course there was my Victory beret, my first pattern release, in November. I couldn’t be more proud of that!

The end of the year plus events last month have had me thinking over my goals for next year, and I’m going to keep things pretty loose. We’re hoping to do more and see more, and that might mean a little less time for sewing and knitting and blogging. I’m not setting any goals, I’m not making any strict plans or resolutions. And I’m totally fine with that!

That being said, I am formulating some ideas for what I want my wardrobe to feel like next year, and looking back on what I created this year has helped me see what I like and where I’d like to change directions. It’ll be fun, casual, bright and colorful, and of course, all with a vintage twist. Sounds pretty me, right?!

We’ll see where the wind takes me next year!