Thanks for all the nice comments about my last handmade outfit post! ♥

If you haven’t noticed, there hasn’t been a peep on here about Me Made May. Here’s the deal. I’ve wanted to participate in MMM for the two years and thought finally, I’m ready to do this challenge! But then the bathroom remodel came up, so it seemed a bit silly to dress in me-made clothing in the middle of a construction zone. Plus, we’ll be in the UK for the last week of May which was going to make documenting the end of it difficult, anyway. Alas. At least I’ve been sneaking in some me-made here and there but it’s kind of a bummer. I’ll just have to to set the bar high for myself next year!

So today you get a sewn outfit post from a little bit ago (before I got new specs, which you haven’t seen yet… tease!). It’s yet another one based on patterns I’ve previously sewn. Because I’m trying to close some wardrobe gaps with me-made clothing, turning to patterns I’ve sewn before with success is an easy and fast way to fill it with staples I know I’ll love. But the results still feel very different, so I’m not bored. (And hopefully you aren’t, either!)

The skirt is New York Patterns 1730, a bias-cut pattern from the 1940s. Nothing fancy, not even pockets. Just a basic navy twill skirt. Something I really needed as evidenced by the fact that I’ve already worn in tons since finishing it a couple of weeks ago! 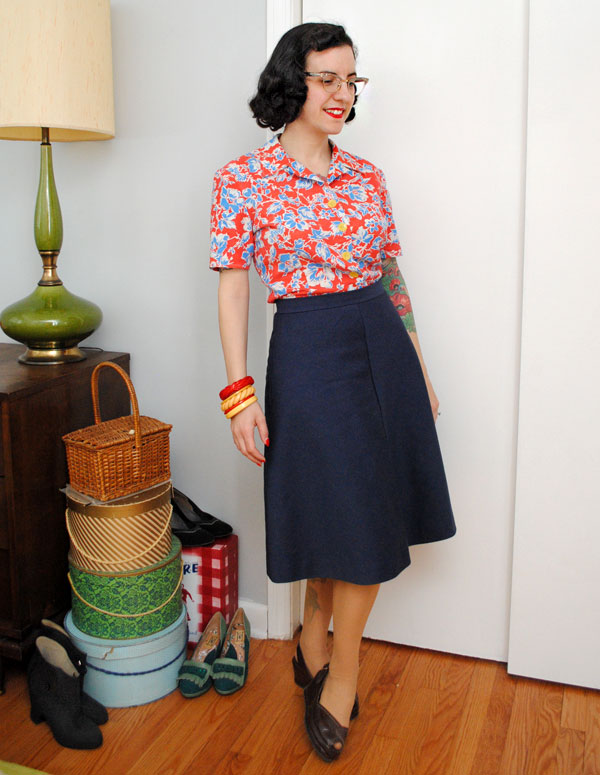 I sewed this pattern first last year, making a green (and equally plain) version. What I didn’t remember when I pulled out the pattern is the hack-job I did last year with the pattern pieces. Good grief. I had modified the seam allowance for a lapped zipper (which needs at least a 5/8″ seam allowance, not the 1/2″ many of my vintage patterns use), but I did something like forget to add 1/8″ to one side seam only. I needed to tidy things up, so in the process, I also removed 1″ from the waistband for a better fit. And now my re-drafted pieces are just right. Yay for a perfect a-line skirt pattern! 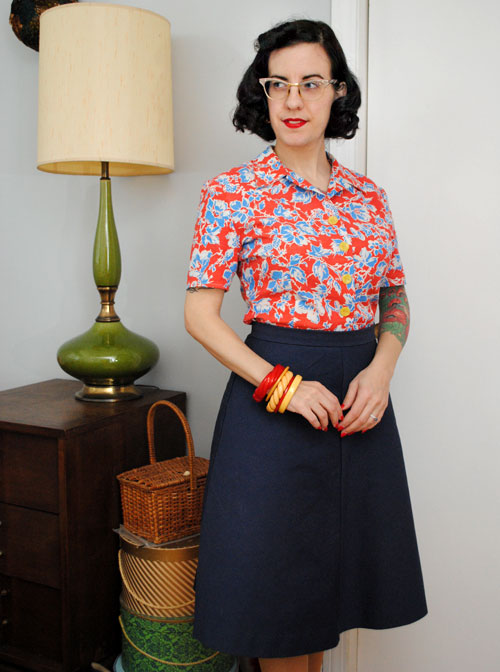 I think I may need to stop sewing this pattern on the bias, though. I don’t really think it’s adding anything to a non-striped version of this skirt, so I think it would be fine on-grain. Kind of like Colette Ginger which can be cut either way… speaking of, maybe I’ll give that pattern a whirl for a change of pace the next time I want an a-line skirt. Anyway, both times I’ve sewn this on the bias I’ve has issues with lining up the lapped zipper due to one or another piece stretching (I didn’t remember that from last time until later, otherwise I would have tried to stay stitch the side seams). At the point I realized there was going to be a pucker at the top of my zipper, I had already ripped out the side seam once which resulted in distorting the length of one piece slightly, so I was concerned another time would cause more problems than it would fix. So I just left it.

For all of you who said during my jacket project that I’m so meticulous … not always so, my friends! I’m a perfectionist in some places, but not in others. I’m still going to wear this skirt. A lot. What can I say. I’ll probably wear it enough that I’ll wear it out and need to sew another one, anyway. (How’s that for rationalizing.) 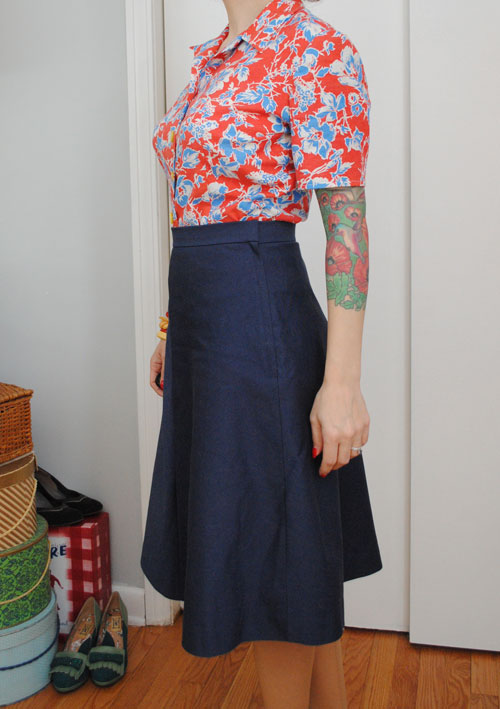 By the way I do still plan on doing a tutorial on my take on a vintage seam binding hem for gored or a-line skirts/dresses (skirts that have fullness at the hem, i.e. not straight skirts). I’m hoping to do that in June. It takes a little time but it’s almost fool-proof. I know because prior to using this method I did my hems using a lot of stupid hard ways that were equally time-consuming but not as effective! 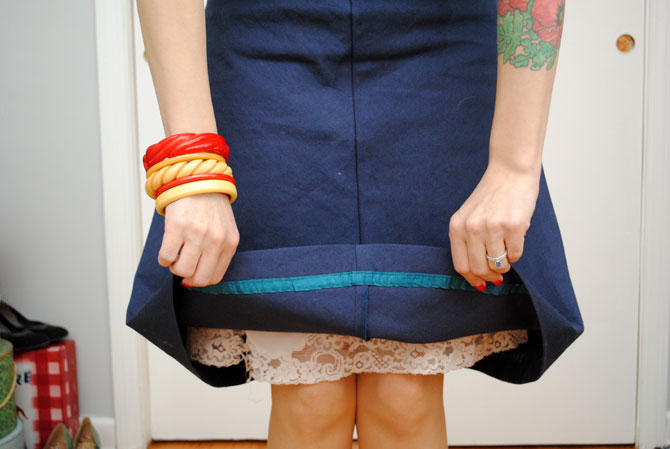 The blouse is yet another McCall 4820 from 1942, are you tired of seeing this yet? Sorry! Really, after sewing this up three times, the only thing I have to talk about is the fabric, since I made no changes to this from the last one. 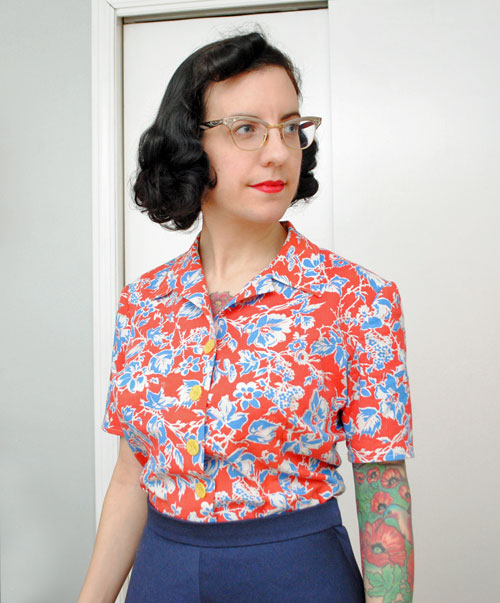 I used vintage cotton yardage I picked up at some point, and I barely had enough to squeeze out the blouse. To see if I could make it fit, I had to lay it out on the basement floor with all pieces doubled where needed—although I’m still in fear that employing this method will someday leave me with two left or two right fronts if I forget and flip over a piece the wrong way. (The stuff of my sewing nightmares. Please tell me you have them too?) 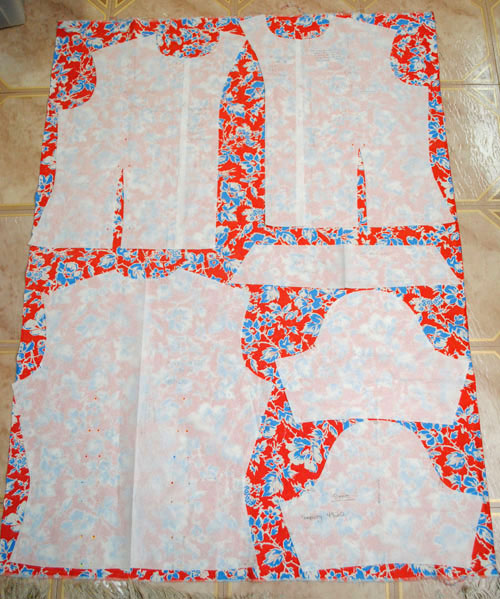 It had a similar texture and weave to feedsack, but it didn’t have the telltale holes along the edge where it would have been seamed and was a little softer, so I’m not sure exactly what it was, other than very pretty.

Now here’s the truth: it wasn’t in 100% perfect condition. There were some manufacturing issues and blips and blobs, and the fabric felt a little worn after pre-washing (although maybe it was just softer). 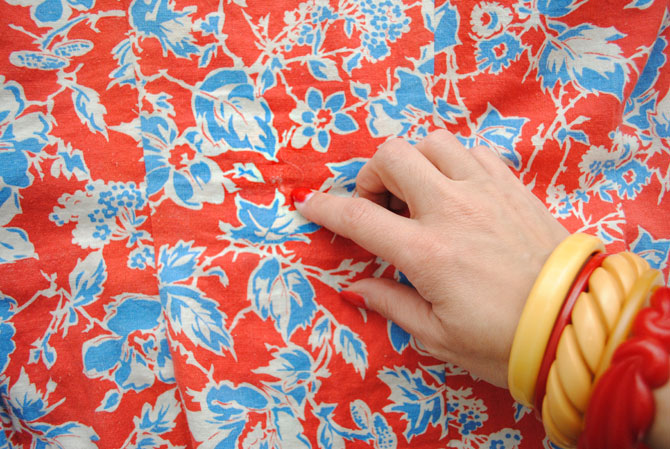 I had to question myself why I’d sew a blouse with imperfect 50- or 60-year-old fabric. Would I do that with new fabric? No. So why would I do it with vintage fabric? 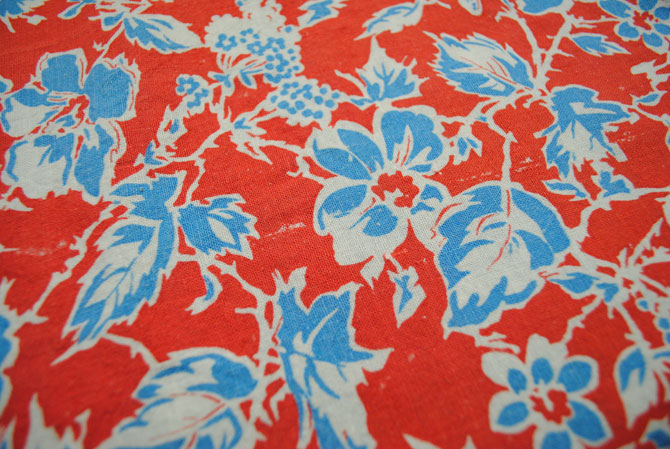 I’m really not sure I have a clear answer. But it’s something I’ve been thinking about, as I’ve done this a couple of times now. 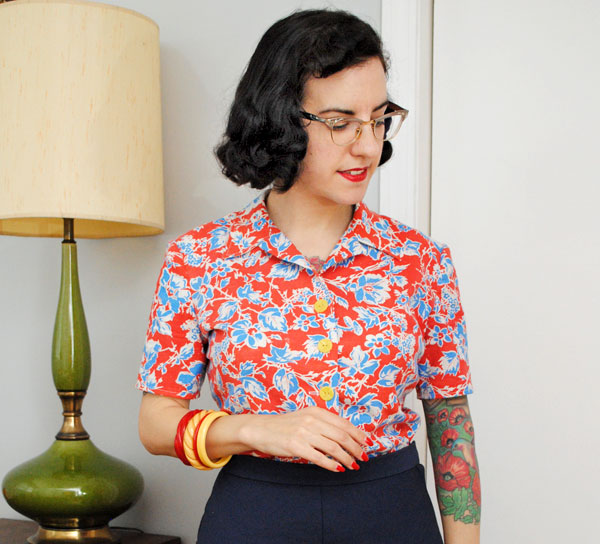 Vintage is just so special. Be it clothing, housewares, jewelry, books and accessories, or raw materials like fabric and buttons. I’m not telling you something you don’t already know, of course, as many of you have your own love affair with vintage!

Vintage involves so many interesting layers. History, stories, memories, research and sleuthing, to name a few. When it’s related to clothing it adds more to the mix. Wonderful shapes and styles, colors, patterns, textures. When it’s recreating vintage with my own hands it adds even more layers. Slowing down and appreciating things. Connecting with a community, current and past. Having pride in my skills and joy in creating something with my own hands. Taking something I love (fabric, buttons, notions) and making it into something I love more (better than the sum of its parts). 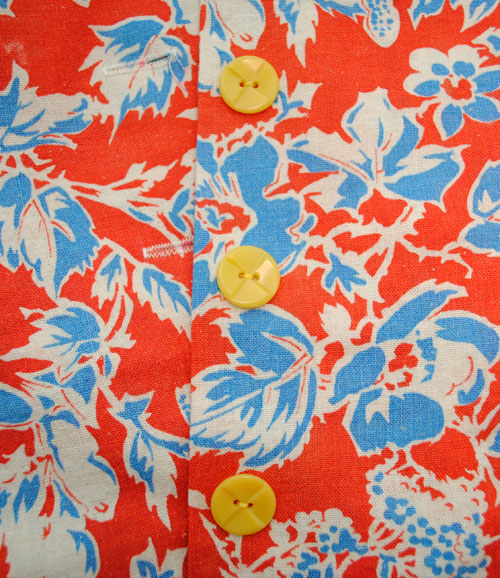 A love of vintage often necessitates the nurturing and repair of delicate things (and they’re only getting more delicate as the years go by). Anyone with more than a handful of vintage clothing or linens in their closet has probably repaired many things in their day, or bought previously-repaired pieces. And we proudly still wear or use those items as long as it’s feasible. I guess in my own way, I’ve extended this to vintage raw materials, too.

So I sewed a blouse with imperfect vintage fabric that I fell in love with. I mean really, isn’t that print fabulous? A beautiful bright blue and white floral on the perfect shade of tomato red. To me, it was something special. It was worth turning into something even better. And even with its faults, I decided it was worth it to me to use it as-is, in a garment no less.

What can I say, vintage patterned fabric is one of my favorite things. And it’s kind of a magical, authentic combination when it’s used to sew up a vintage pattern. I figure I’ll try to find and use as much of it as I can while I still can… because that well is going to eventually run dry. Someday textiles that comes out of attics, closets and basements will either no longer be usable… or just plain won’t exist any more.

Maybe this all means the blouse isn’t perfect. Maybe it won’t last as long as the first version sewn with modern fabric. But nothing will last forever, anyway! So I’ll give it all the love I can and know that it was better for this wonderful fabric to see the light of day than sit on a shelf. 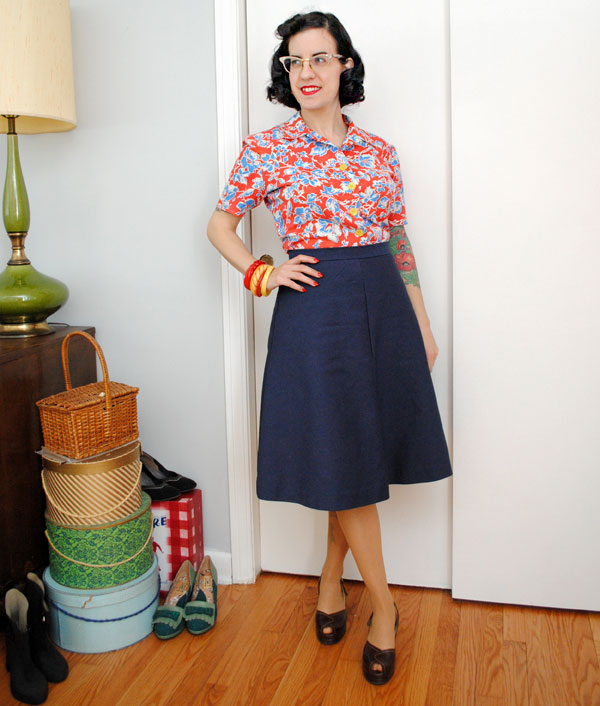 And when I wear it, I’ll know yet another little piece of history is riding on my back. And I’ll enjoy it as long as I can. 🙂