I really owe Debi from My happy sewing place a big thank you for the inspiration for this blouse!

If you follow Debi’s blog you’ll already know she’s embarked on a huge long-term project called the 1940 McCall project where she intends to make all the McCall patterns from 1940. What an exciting commitment! I’ve been very inspired by her posts about the early stages of the project so far and it led led me to think about my own sewing goals, which I’ll talk about in a future post.

When I read about Debi’s project, I went through my vintage sewing patterns to see if I had any McCall patterns from 1940 that she was missing that I could send her, but I discovered not only did I have very few McCall patterns period, none were from 1940. The closest I got was a blouse from 1942. I’ve been meaning to get over some reservations on sewing notched/convertible collar blouses, so inspired by Debi and her commitment to her McCall project, I decided there was no time like the present and this McCall pattern would be the one to try.

The pattern is McCall 4820. I sewed view B without pockets (though the pockets would be a great way to show off a vintage hankie). Isn’t the envelope art great? 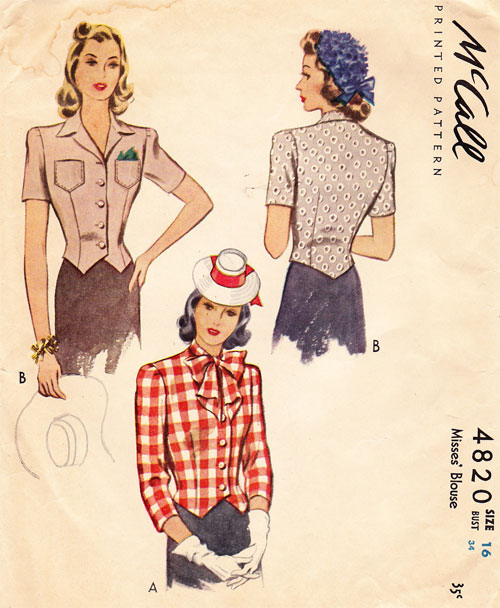 Now, I don’t go in for “wearable muslins” usually. I either make a muslin or I don’t. But this fabric begged to be a wearable muslin. I bought it over two years ago when I first toyed with garment sewing. I love novelty prints but no longer loved this one (though I still liked it okay), so I thought that would make it a good candidate to try out a notched collar blouse. It’s a lightweight cotton voile from the Anna Maria Horner Little Folks line. As it happened I could not straighten the grain in this fabric to save my life, so I figured if it worked out great, and if it didn’t, no big loss.

And more or less, it worked out! There’s a few funny bits due to the grain issue, but nothing that makes it unwearable.

I think I conquered my fear of notched collars (with no back facing) with this one. They’ve been my theoretical nemesis in sewing for a long time, even though it’s the style of blouse I wear the most! So that’s really kind of plagued me.

I say “theoretical nemesis” as I’ve only sewn one blouse with a notched collar (two years ago) and it went together okay, but I never felt I full grasped how it’s supposed to work, no matter how much I read about them. Which I did. A lot. Including this, this and this, along with several vintage resources. I still think it’s hard to get the area where the shoulder line meets the edge of the front facing (and where you turn in the upper collar) to look nice, but now I’m over my worrying about it. Sometimes you just have to do it and get over it. 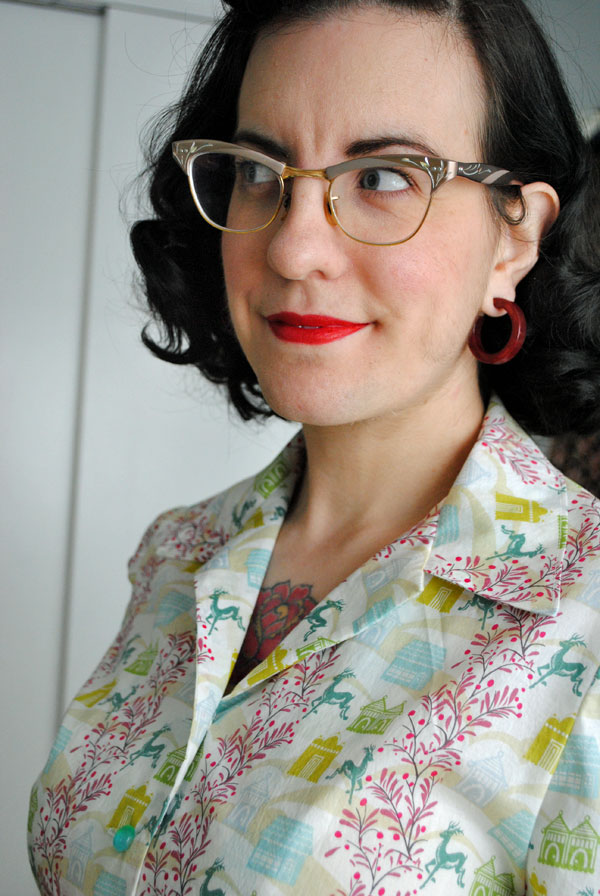 Question: are you supposed to press a collar open? The underlap side lays flat but the overlap side doesn’t want to, and I was trying to decide if I could coax it flat by pressing. This is maybe a side effect of the aforementioned weird grain issue, but I wasn’t sure since it’s my first collar like this.

Now here’s an awesome moment of sewing stupid: I didn’t realize until I was taking photos of this blouse that I placed the back piece upside down. I KNOW. That after trying to match up the front pieces, even. If I didn’t photograph it, I wonder how long it would have taken me to notice? 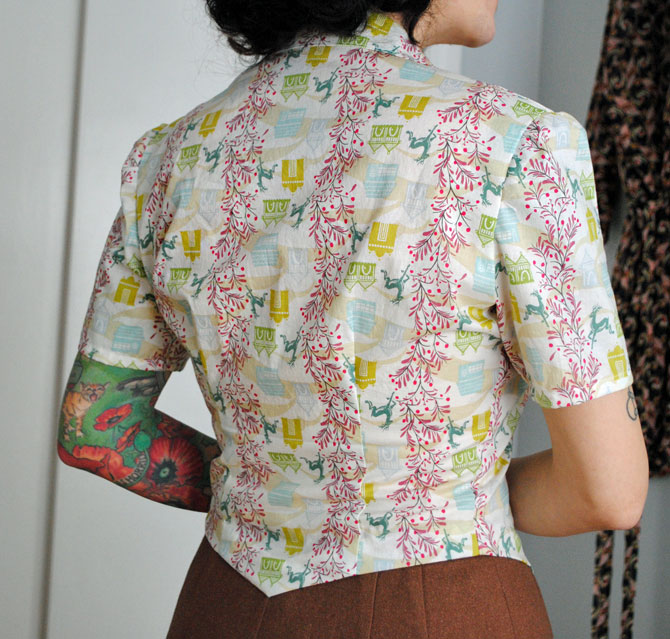 Even though I wasn’t hugely keen on the westkit-style shaping at the bottom of the blouse (I prefer to tuck in my blouses), I went with it on the first pass at this pattern as I knew it would be easy to change the length and shape of the hem in the future. But trying to get a smooth hem up and around and back down the sides of the blouse was nearly impossible. Fortunately it lays more-or-less flat on my body even though it’s a bit wobbly on the hanger.

The body is shaped with two long darts on the front and back and no bust darts. The front darts were new to me as they’re cut out! It’s kind of annoying to do them, actually, as the dart extends about two inches above the cut, so maneuvering that bit with my serger was kind of a guessing game. 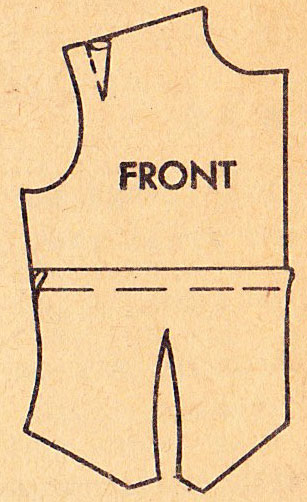 The only thing I changed with the pattern is the sleeve head. The original pattern has a very classic 40s pleated/darted cap, but I’ve learned over time this style is just too severe for my narrow shoulders, be it fabric or knitted. Instead I went for a slightly puffed sleeve cap that’s more flattering on me. Casey did a great post on demystifying sleeve ease if you’d like to learn how I did it. I think in the end this sleeve cap has about 2.5″ more ease than the armhole. I might even add another inch in the future for slightly more puff. 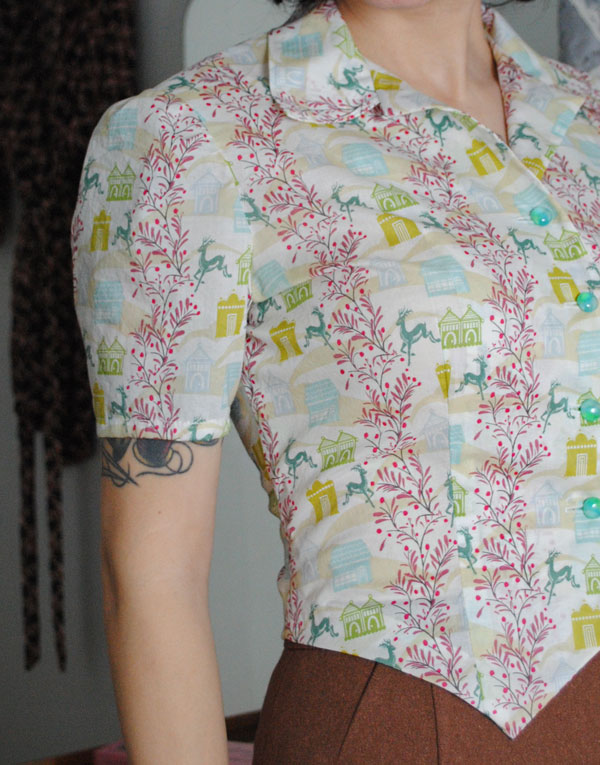 When I was picking buttons from my stash I picked these blue-green ones, and thinking back 2+ years I believe I actually bought them to go with this fabric. I guess it was meant to be! 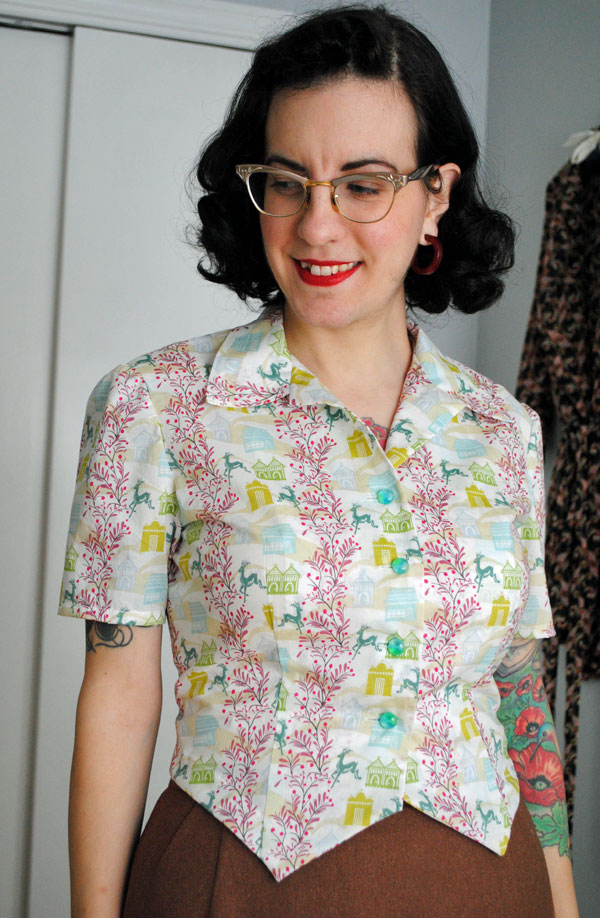 I have to say, it was such a pleasure to sew something that actually fit in the body and the shoulders right off the bat. I am definitely going to be looking for more vintage McCall patterns in my size! I also just discovered I’m a full dress size smaller than I was for years. I have no idea when that changed (I suspect prior to last summer, judging from the fit of things I sewed then) but it explains the feeling I’ve had for awhile that everything I own or have sewn is slightly too big. Kind of a weird feeling when you own a lot of vintage or one-of-a-kind clothes!

Anyway, here’s a rare photo of me without my glasses, as they were glaring from this angle. You can almost tell I have blue eyes. 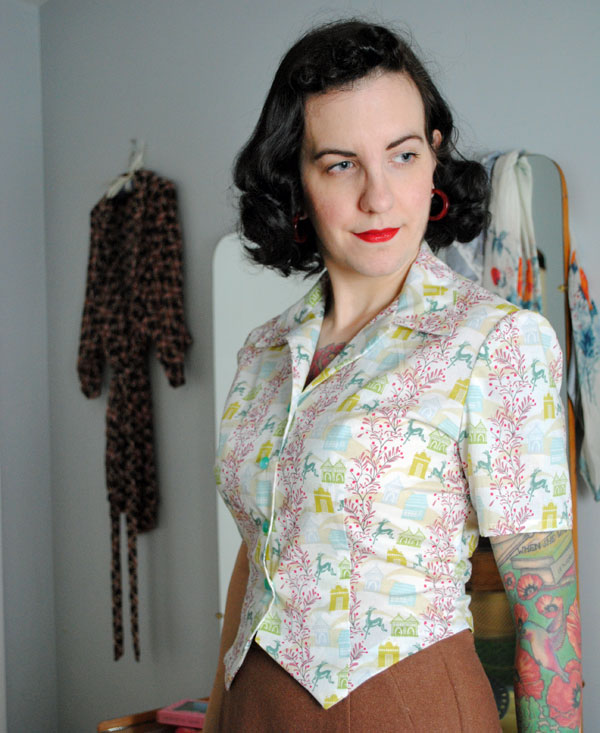 Other outfit details (that you can see)

I’ll definitely sew this blouse again. It’s been a goal of mine for over a year to have a blouse pattern that I can turn to again and again, and this is it! In fact I’ve already traced off the pattern pieces and lengthened and straightened out the hem for future versions, and I’ll be sewing another soon in vintage fabric. I can see many variations of this to fill lots of gaps in my wardrobe—what would you do to make it special?

Even though I’m still calling it a wearable muslin (hello crappy grain and upside down back), I’ll definitely wear this cute lightweight blouse. I don’t know why I had such a mental block on notched collar blouses. I think it was really holding back my sewing. No longer. I consider it a big triumph, since it led me to a pattern that I know will become a tried and true one for sure.

Thanks for the inspiration, Debi! 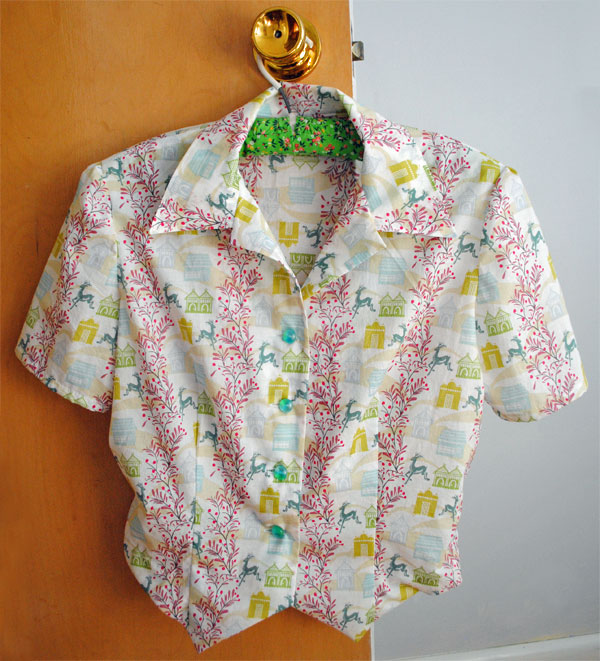