Last week I completed my first outfit of 2013! 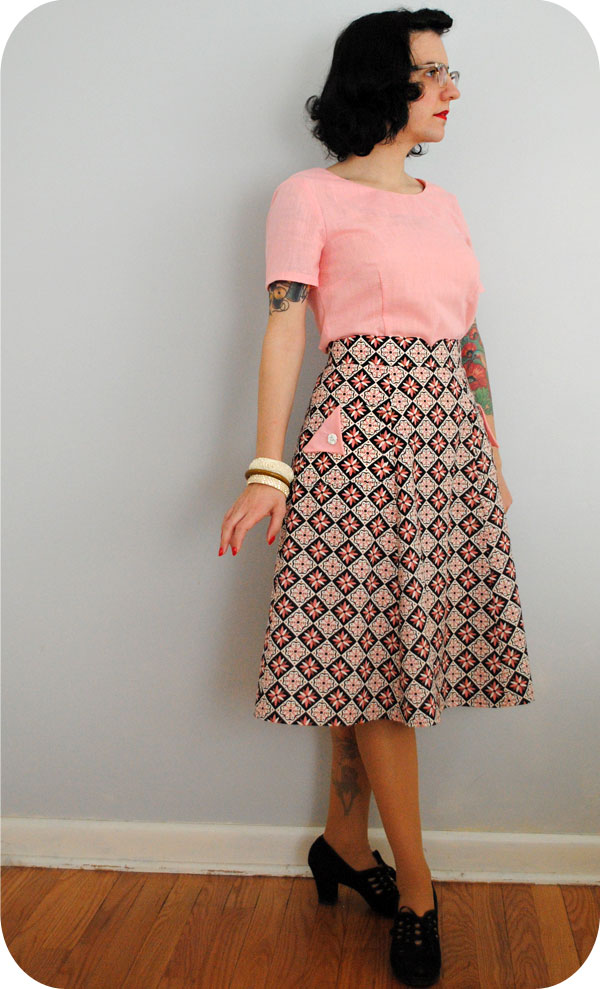 And yes, I planned and sewed an outfit! Let’s talk about the blouse first.

I used the Sewaholic Alma pattern and sewed the size down from my full bust size with only slight changes: I make the neckline a little higher, graded the hips down (since I don’t have a pear shape like Tasia’s line is designed for), and cut 1.75″ off the length. The blouse went together like a dream!

The pattern calls for an invisible side zipper, which I wanted to convert to a normal zipper to be more in line with a vintage blouse. But on my muslin I basted the side seam shut just to see if I could get myself into it without a zipper and I could! 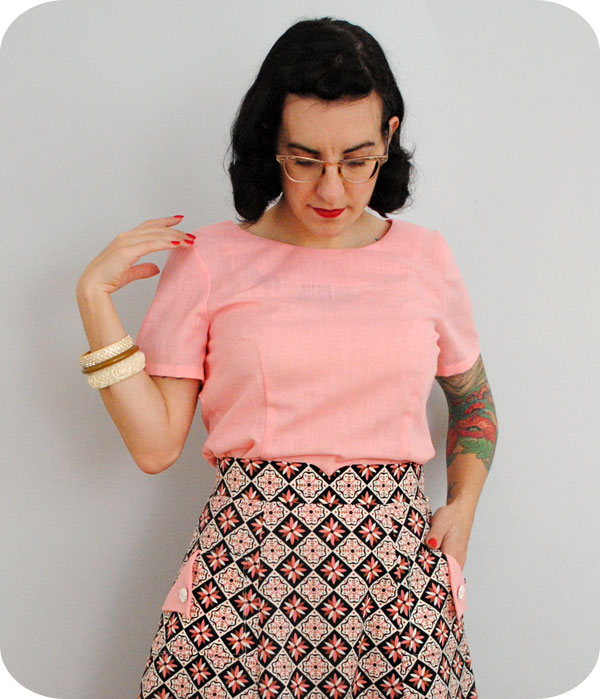 I used fabric I had in my stash for awhile. I know I originally bought it for a blouse and it finally became one. I remember it was described as “linen look” but that’s about it. Whoops. I think it must be a cotton/poly blend.

Look how nice my darts look! They never look this nice. 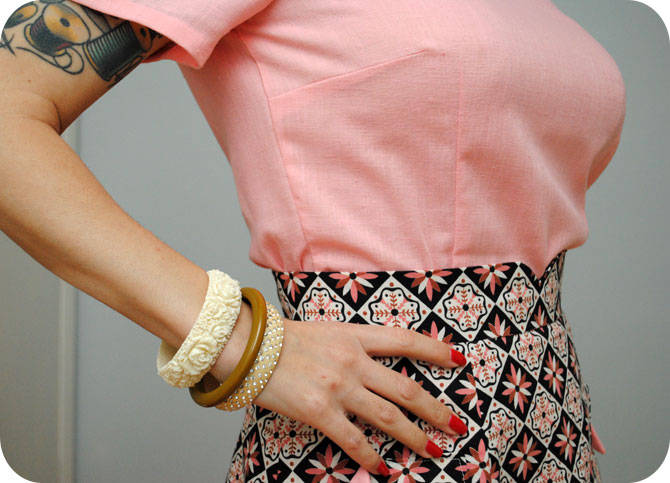 The blouse isn’t exactly my typical style, but I didn’t want it to button-down or have a collar as I suspected it would look like a waitress uniform. It came out looking a bit 50s/early 60s to me, especially in the pink, though you could make a case that it looks a bit like view 4 of this Hollywood pattern below. (If nothing else, my hair sure does!) 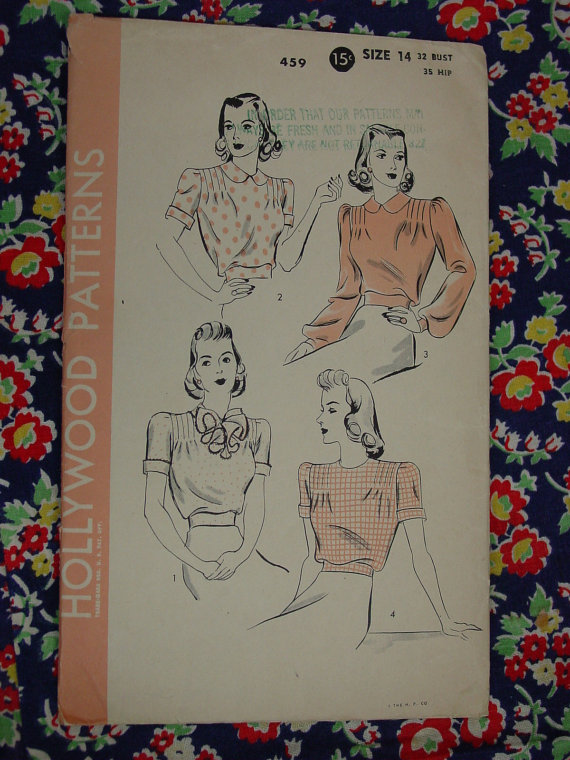 {Source: for sale by Aunt Nonnie’s Nest on Etsy}

I could see myself using the great basic shape of Alma to draft something slightly different. I’m thinking a version with sleeves that are part of the bodice. I’m not sure what they’re called, but they’re like cap sleeves but not set in. You know the type, like in this 40s McCall pattern on Etsy or Collette’s Sencha. Does that have a name? One of my hopes this year is to tackle this type of sleeve as it’s always too big on my narrow shoulders but I love the look when I see it on someone else!

As for the Alma sleeves, those were easy to set in. It’s often the point in a sewing project when I’m ready to chuck the entire thing out the window, except I sew in the basement so really I’d have to toss it out the basement door, which loses a little something in the translation. Not this time. 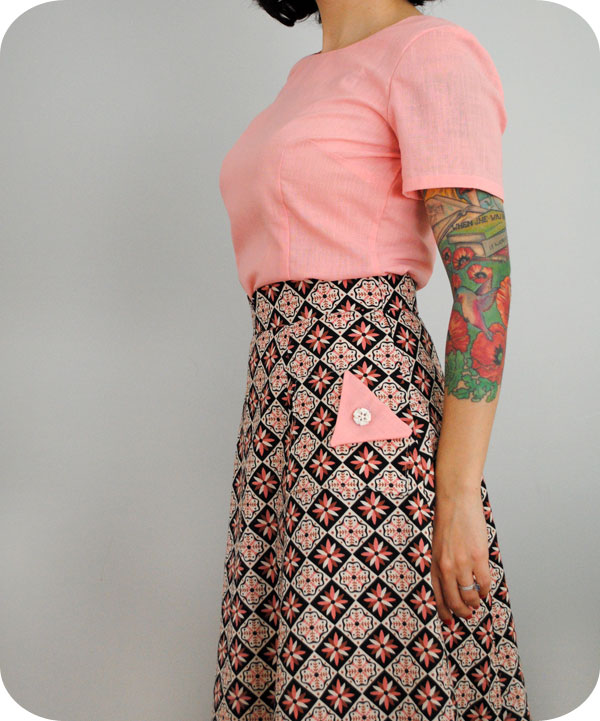 The skirt used Simplicity 2211, a 6-gored skirt that Vintage Pattern Wiki says is from 1945 (why don’t Simplicity patterns have dates on them?!). The envelope is in terrible condition but it’s marked on the flap as a “Truly Teen” pattern. Ha, not quite! 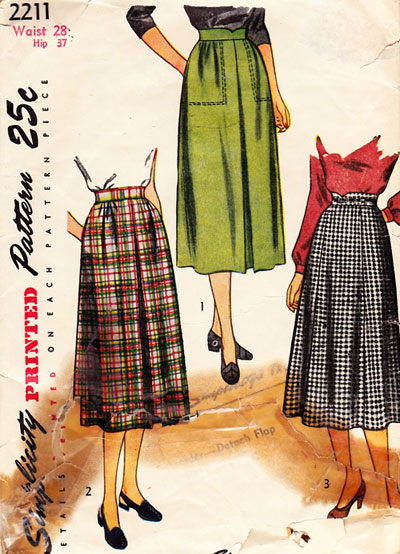 I used a vintage cotton from my stash. I don’t wear a lot of pink but I really loved this diamond-shaped print. I was a bit nervous to use it as I think it was my first time cutting into nice vintage yardage, but I’m glad I did as the skirt is quite the showpiece for it, don’t you think? 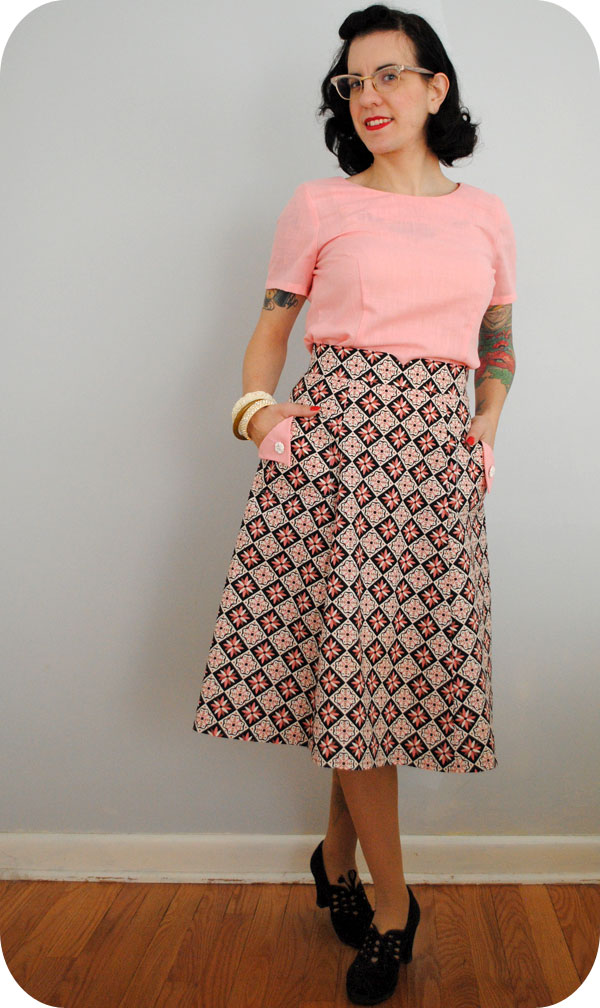 I went back and forth about whether to just make the waistband straight or go ahead with the scallop since it’s such a busy pattern, but I went for it. In the end it would benefit from being worn with a more fitted blouse as when my shirt shifts around, it hides the scallop.

What a pain the scallop was, though. The waistband is one piece and you have to fold it in half lengthwise and very carefully sew the shape into just the middle, then clip and turn it, which is all nerve-wracking when you don’t think you’re that precise (like me). 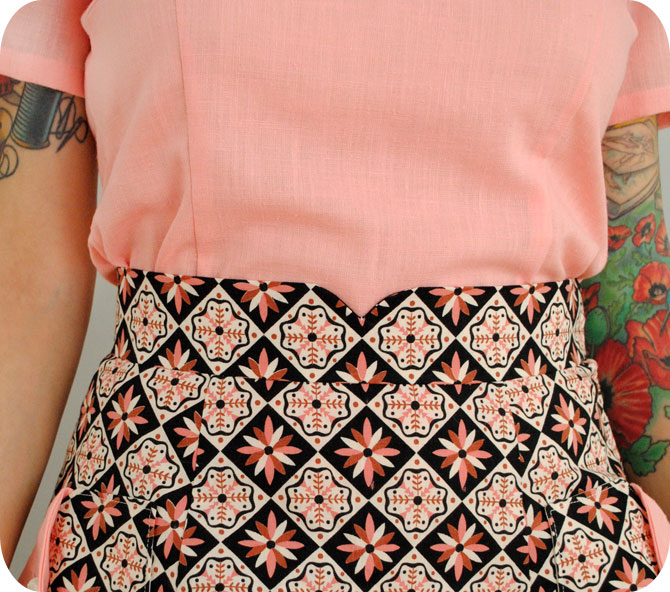 Speaking of the pockets, those were my own creation… and you’ll just have to wait for a special post in the near future to learn more about them! 🙂

Overall I’m pleased with the final skirt except for a minor issue. I ended up with a ripple at the top of my lapped zipper, but didn’t realize it until after I’d completed the waistband so I wasn’t going to rip it all back. For me the the underlap side (back) sometimes sucks up more fabric when being stitched to the zipper tape and makes it then not quite exactly the same length as the overlap (front) piece.

Fortunately it’s a busy print. My lapped zippers still need a little work but it’s such a great vintage technique. And who has ever said, “zippers, mine always look perfect!” Um, no one, I’m pretty sure. This one is hand picked, not that you could ever tell!

In the end, even though I made exactly what I set out to make, a matching outfit, I don’t actually like that it’s a matching outfit. But I tried out an idea and I’m glad I did. You never know until you try! And both pieces are a success on their own, so now I have two new separates to mix and match.

I’m already almost finished with another vintage blouse and have tons of ideas swirling about in my head, so I think I’m off to a good sewing start in 2013! 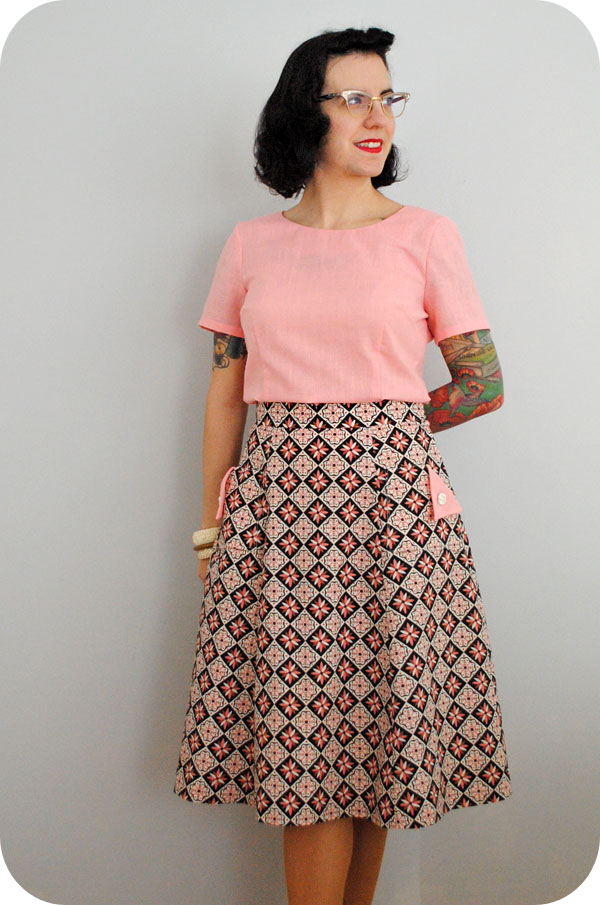