I wanted to take a second to thank you for your warm comments on my announcement about my upcoming first pattern release. It’s pretty exciting! I really appreciate all the support, it means a lot to me. I was so happy to finally share the news with you! ♥

In other knitting-related news, today I’m sharing my latest finished project. I’m in love with it! 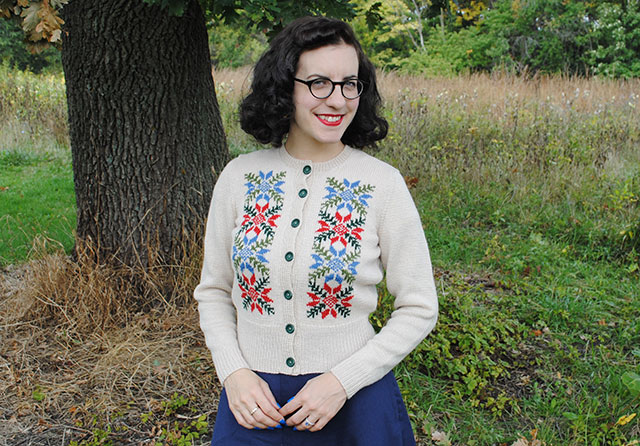 The pattern is called Hedy Tyrolean-Pattern Cardigan (Ravelry link). It’s  a modern rewrite of a vintage pattern from the book Knit Vintage by Madeline Weston and Rita Taylor. There are several delightful patterns in this book. 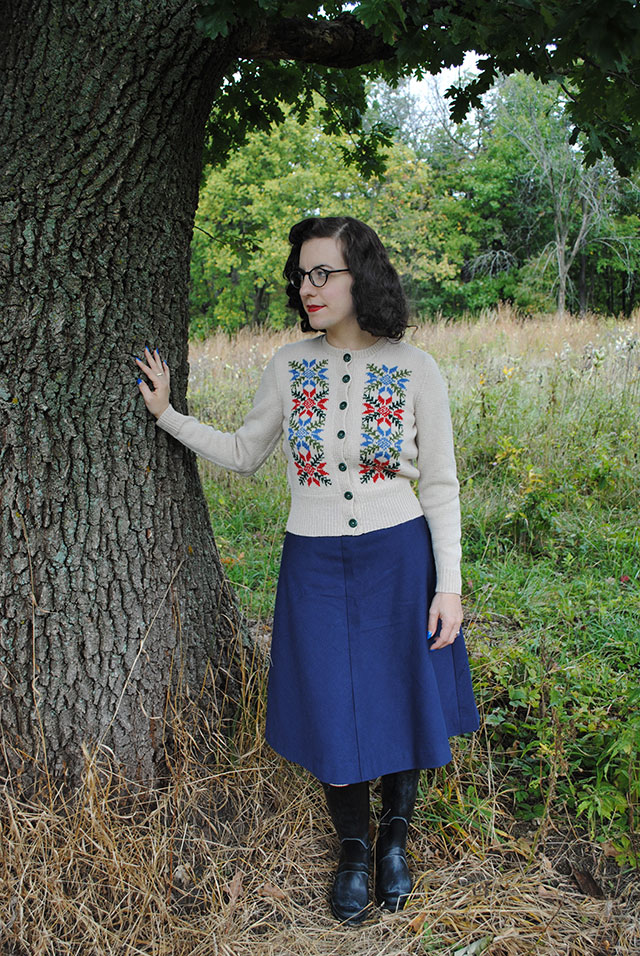 The styling in the book is admittedly a little funny. It’s kind of a cross between shabby chic and a French provincial estate meets 1980s television dramas like Dynasty. But if you look past that, you’ll find several lovely patterns. Including Hedy, who I’ve fallen in love with. 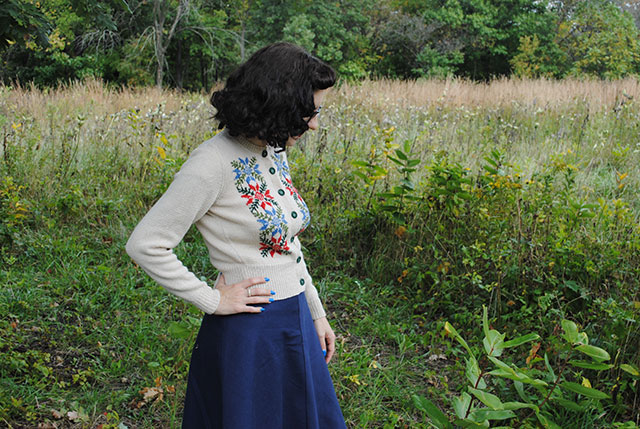 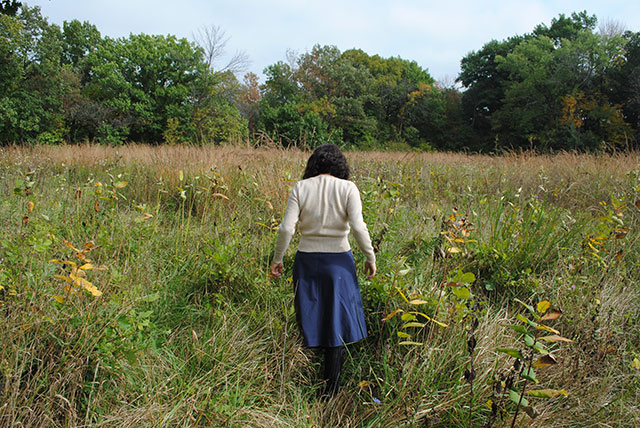 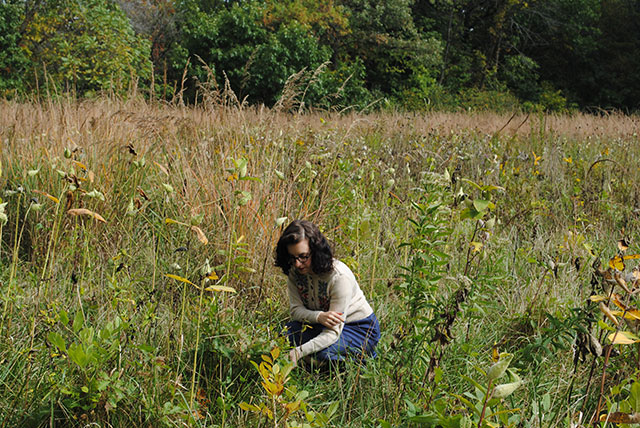 I do not love working intarsia, although I knew that going in but couldn’t resist, since I bought the book specifically for this pattern. The intarsia panels are the reason that I knit about three-quarters of this cardigan in the spring and couldn’t bring myself to finish the second front panel until August, when that’s all I had left to do! Seriously, just 3 flower motifs on the left front, and the button bands was all I had to finish up.

I don’t usually knit sleeves first but in this case I wanted to get all the painfully boring knitting out of the way. To follow with the intarsia, which was painful in its own way. 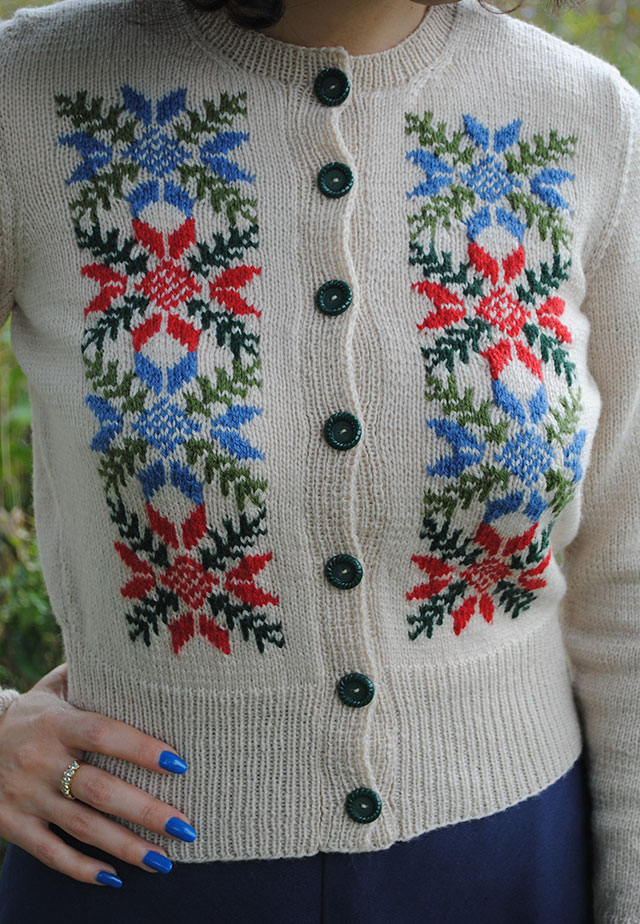 I know it looks like I matched my nail polish to my sweater but they’re totally different blues in person. Secret’s out!

The color of the cardigan in the book is light green, with pink and purple flower motifs. I knew right off the bat that was totally not me, so I changed it up to a cream heather background with red and blue flowers. I used KnitPicks Palette which isn’t the most exciting yarn on the planet but is inexpensive and comes in a dizzying array of colors.

I couldn’t be happier with the flowers! They pop off the cardigan, and with it featuring greens, blue and red, it should match a lot of what I wear. 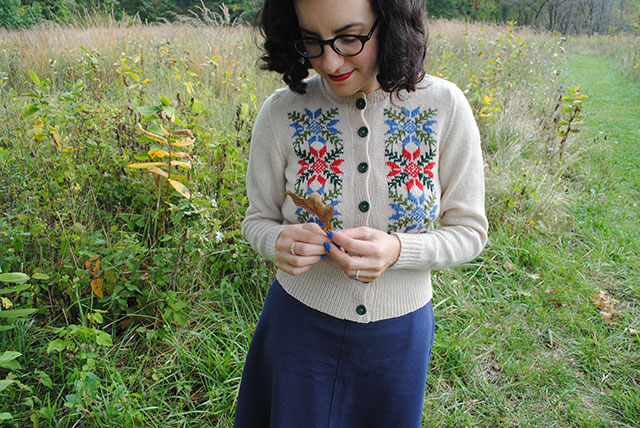 The buttons I used are forest green vintage ones from my stash with a cute little swirl pattern on the outer rim. I bound off three stitches for the buttonholes instead of two as the pattern called for, since my buttons were bigger. The button bands are sewn on after in a typical 1940s style. For sheer curiosity’s sake, I keep looking for older knitting patterns with a picked up button band along the edge like most modern patterns call for, but haven’t encountered one yet. You usually see bands (sometimes called strapping) in this style or crocheted on afterwards.

I’m about to start on a cardigan for which I’ve decided to knit the button bands on at the same time. It will result in the same look but with no seaming. However, it takes a lot more specific planning about where the buttonholes will go, so you don’t end up at the neckline with two buttons needing to be crammed closer together than you wanted. (Anyone interested in a how-to on that?)

I really didn’t change much except the gauge, but I admit that since most of this was knit months and months ago, I don’t remember everything I did! I think because of my gauge change I recalculated the shaping of the sleeve cap, but that’s all I really recall, other than omitting the seed stitch on the yoke. I think I mostly knit this as written. 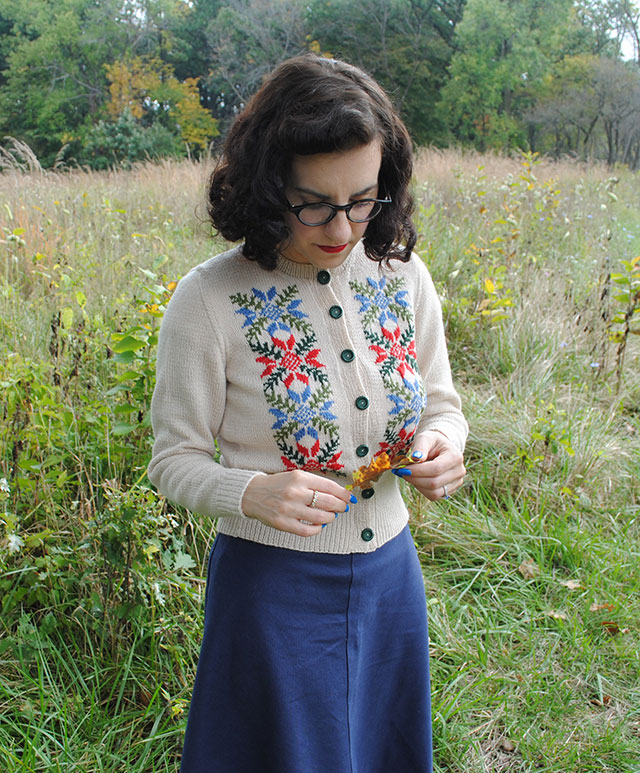 I am sooo pleased to have this cardigan off my knitting needles just in time for fall. I can see myself wearing this all the time! 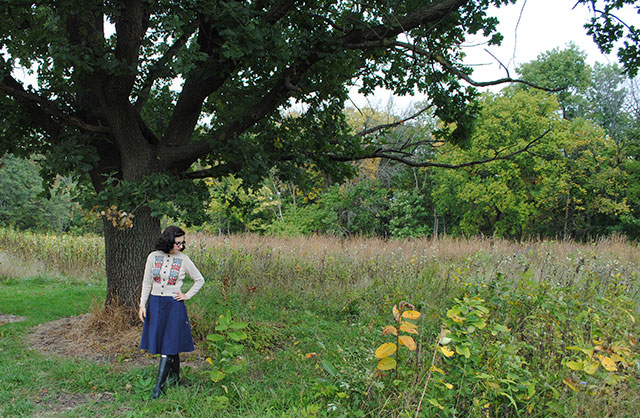