I’m back from vacation and I’m INSPIRED!

Two years ago, we went through the looong process of transforming a large part of our basement into studio spaces for ourselves. Back then, I did a few posts on it—sharing the dirty ‘lil before photos, the planning and build-out phase, and creating my dream cutting table. But I haven’t shared anything about it since.

The truth is, I absolutely love my sewing and craft space that I created, but most ideas for it stopped the second we were done building it out and the second I started working in the space itself. I was just too busy sewing and creating to really worry about things like decorating, art, small storage that I hadn’t already incorporated in the first few weeks, etc. I just wanted to use the space. Yeah, I’d periodically hang something on the wall, but there wasn’t a cohesive thought to it. 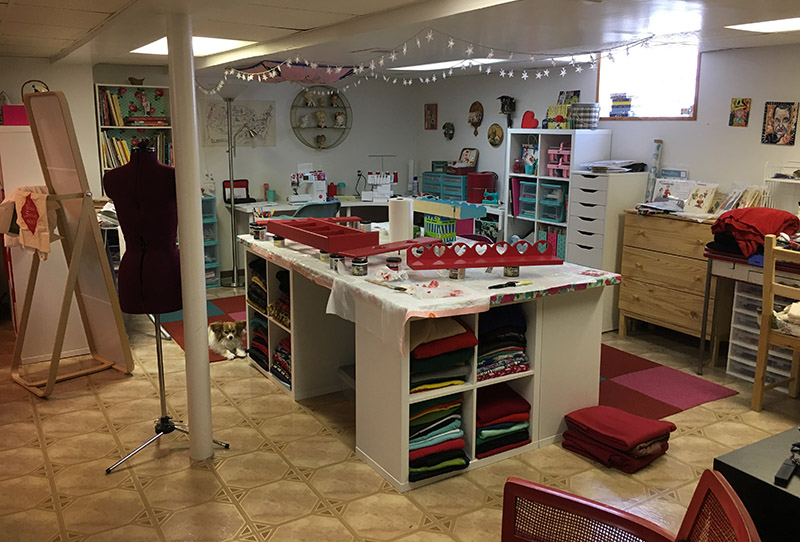 My space, as it looks mid-projects today

And it’s treated me great, this space. I adore it. But there was always something missing, and it was the spark of inspiration to take it to the next level where I felt it was really “done”. Or working towards that. I know that no space is ever done, which is why I think many “reveals” are kind of silly… I mean aren’t homes always a work in progress, in some way or another? But I didn’t even want to share the current state, because it didn’t speak to me yet, other than being super proud of having created my dream space to begin with. Don’t get me wrong, it’s a fabulous work space, but it wasn’t singing my name to me. (Well, other than the obvious part of me having entirely designed it for myself, picking the color scheme, and it being full of all my stuff. Clearly, that’s all “me”, too. But maybe you kind of know what I mean.) Plus, I knew there were projects I envisioned doing that I’d never tackled yet, and that annoyed me.

A few weeks ago, I randomly decided it was finally time to address one of those things that annoyed me that I never took care of, which was adding a table skirt / curtains under my sewing table. That kind of started the ball rolling in thinking about this space again. Then, when we were in Tennessee on vacation recently in the Smoky Mountains, I fell in love with two posters from the National Park that I just had to have (one a reprint of a 1930s WPA poster, the other in that style).

And then it hit me. The spark, the missing piece of the puzzle. The thing I’ve needed these last two years. My theme!

I love to travel, and I love vintage tourist and souvenir type items. In clothing and jewelry, housewares like my souvenir plates in the kitchen, you name it. And that needed to be the theme in my sewing area: travel. It was staring me in the face the whole time, because one of the first things up on the wall in my sewing studio was a vintage embroidery sampler I found a few years ago of U.S. state flowers. And I already had incorporated a couple of wooden plates from the Netherlands alongside two non-working cuckoo clocks. I even had a vintage globe pin cushion already. I had a theme waiting for me to discover, I just didn’t know it.

So suddenly the flood gates of inspiration have opened! And of course, just because I’ve picked a theme doesn’t mean other things I love won’t be included in my space. My childhood (and some adult-bought) vintage Nancy Drew books are displayed in my sewing area, along with two paintings Mel made for me, one of Jeremy Brett as Sherlock Holmes, one as Joan Hickson as Miss Marple. So there’s a healthy dose of my love of mysteries included. Plus, I need to incorporate some of my geeky love for things like Doctor Who (though frankly that blends in beautifully with travel, obviously).

But just having a theme, having the inspiration… that’s what I needed to kick me in the butt.

I’m suddenly taking care of things I’ve long wanted to do. Painting, planning, you name it. I have fabric on the way for my table skirt—two different Cath Kidston (one of my all-time favorite shops) London-themed ones… I’ll decide which I like best or maybe I’ll make two sets to swap out! I have a magnetic board on the way to cover in fabric and to hang up things like vintage postcards, photos and train tickets from our travels. I finally came up with the type of lamp I want for the back corner of my sewing table—wait for it… a light-up globe! How perfect is that, plus I’ve always wanted one! (p.s. Yes I know they don’t give off a lot of light, I actually don’t have an issue with the light when I’m sitting at my serger which will be closest to the globe, it’s just a weird deep corner of the table that I wanted a light in to spruce things up a bit.)

I actually re-covered my ironing board recently, even. I’ve been wanting a new ironing board cover to match my space for the two damn years I’ve had the new space. And I used fabric I bought at Cath Kidston in Dublin several years ago, so in a roundabout way that even fits my travel theme, too! 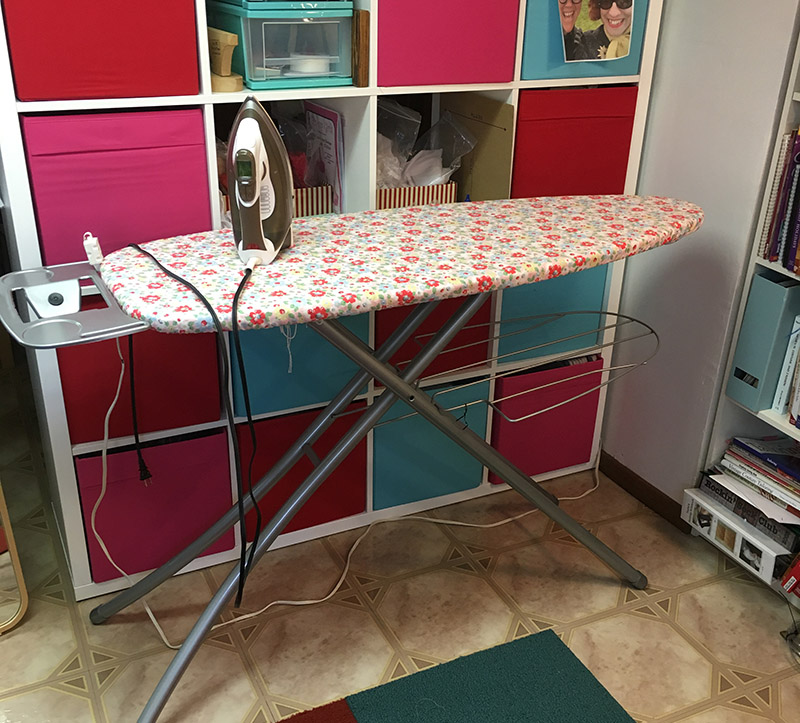 (Sorry it’s a bad photo… this post is all iPhone photos because it was that or no post at all. Sometimes you have to just go with what works.) 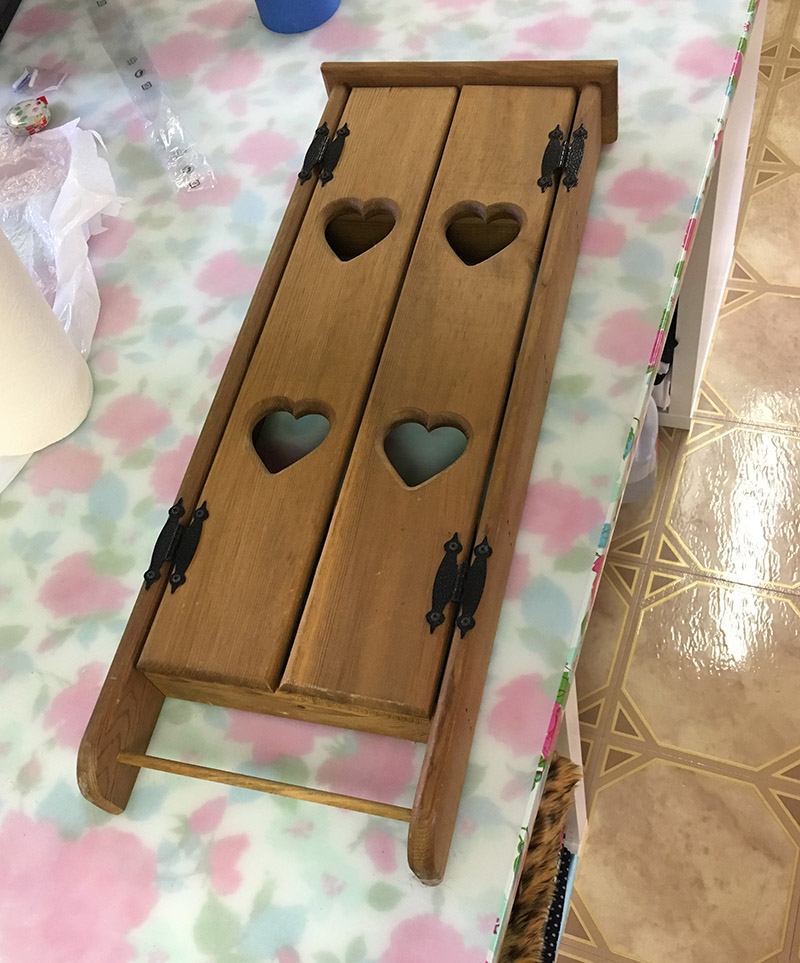 It’s something you’d probably have bought at a craft fair to store salt and pepper shakers or shot glasses maybe (the shelves are very narrow), but it was never finished as it didn’t even have a way to hang it on the back. Do not get mad at me for painting wood—it wasn’t even in great condition to begin with (one of the shelves is super rough near where a knot probably was, none of the staple holes were filled, etc.). This cabinet was literally living in the corner of my sewing area ever since I bought it, taunting me. No more, it’s now on its way to being red, finally! Don’t know what I’ll put in it, but the cabinet will be cute and red and I’ll figure it out.

In the photo below, the 3 pieces on the left and top are the doors and shelves for the cabinet: 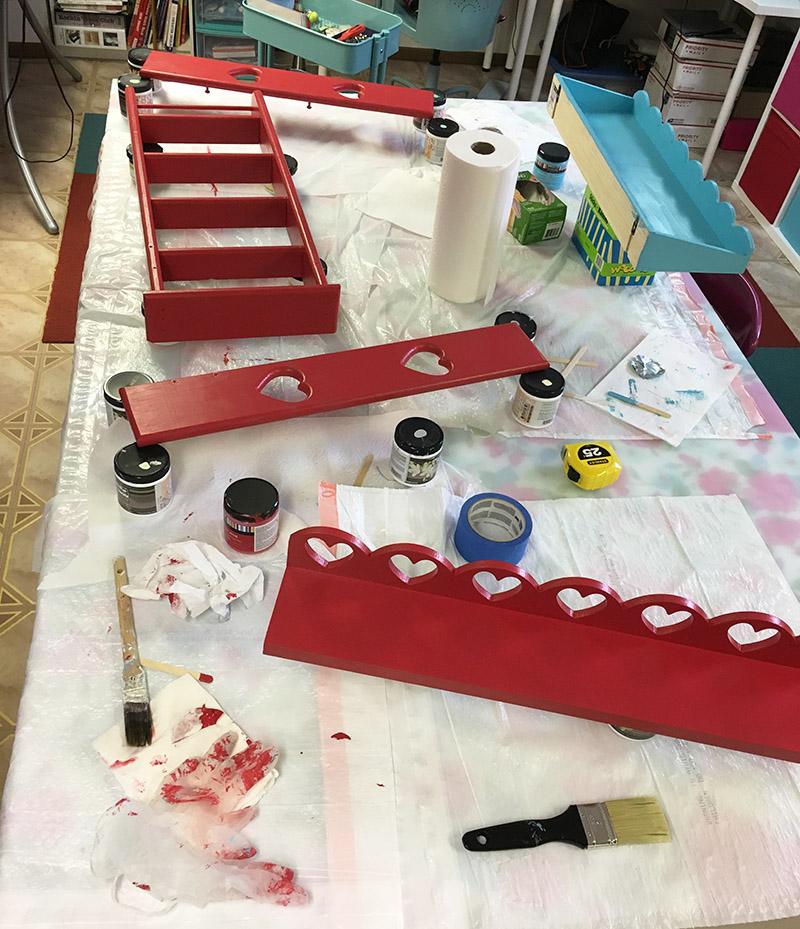 And here’s one of the two shelves from Michael’s that I’m painting. This will hold random knick knacks, I think. It’s such a great match for the vintage cabinet! And can’t beat it for $7 on sale. 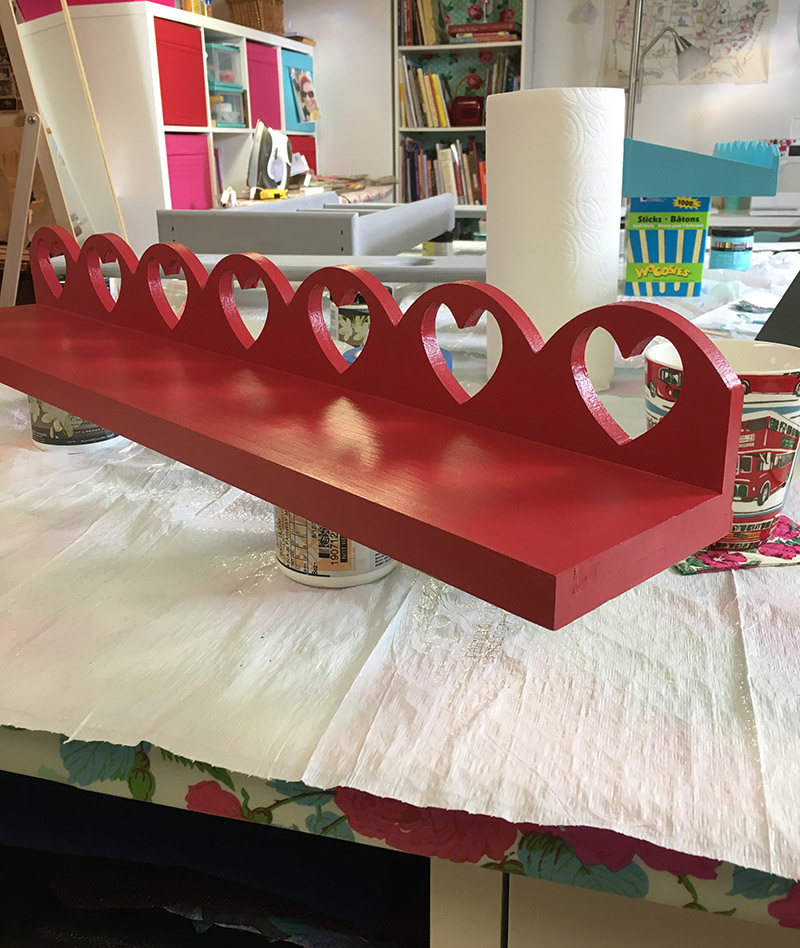 The aqua shelf I’m painting tickles me to no end because awhile ago, I decided I wanted a small shelf above the dresser I keep my sewing patterns stored in, to help display patterns that I have out as inspiration. Usually currently-working-on, want-to-work-on, just-finished-working-on, or new-to-me. I keep them on top of the dresser, but thought a shelf would be a lot cuter than them just sitting haphazardly on the dresser. Or at the very least, allow me to have some on a shelf, some on the dresser. (Let’s be real, if it’s a surface, I’ll fill it.) 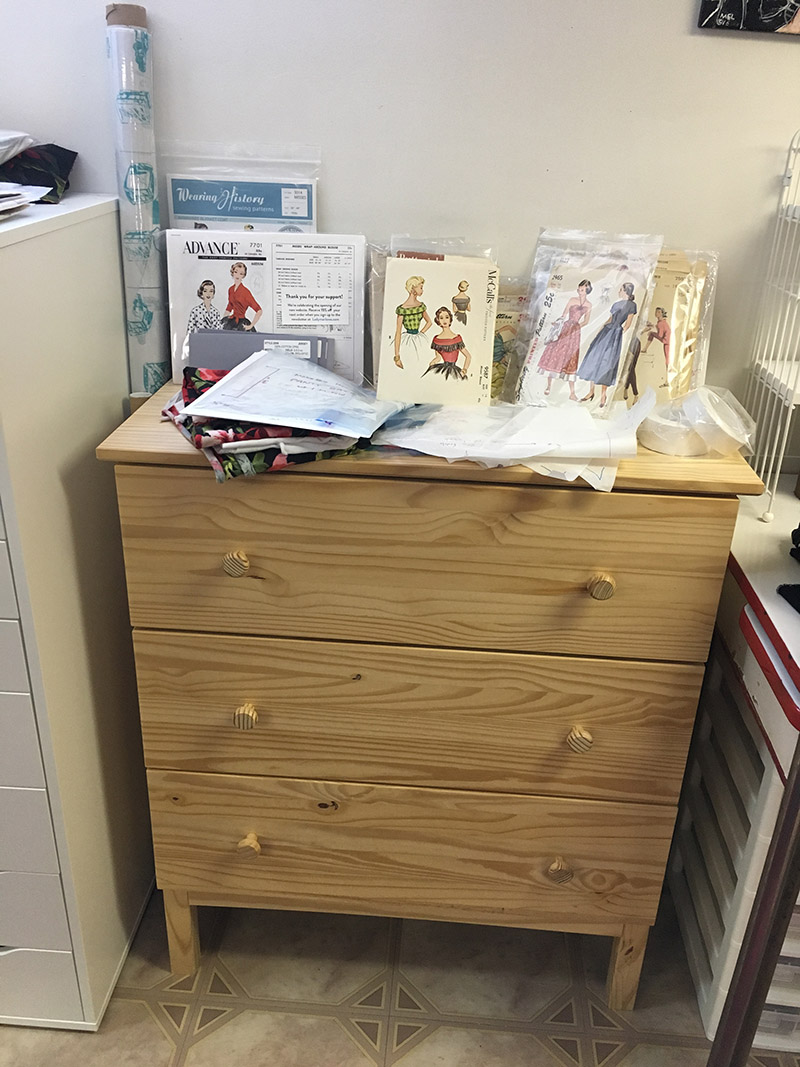 There’s someone who made ones I liked on Etsy but they were pricey and then she stopped selling the size I wanted anyway. So for $11 on sale, I bought this scalloped shelf with the intention of using it upside down as you’ll see below, so it would have the scallops as a lip in the front, and sides, like a tray! Pretty ingenious if I do say so myself. 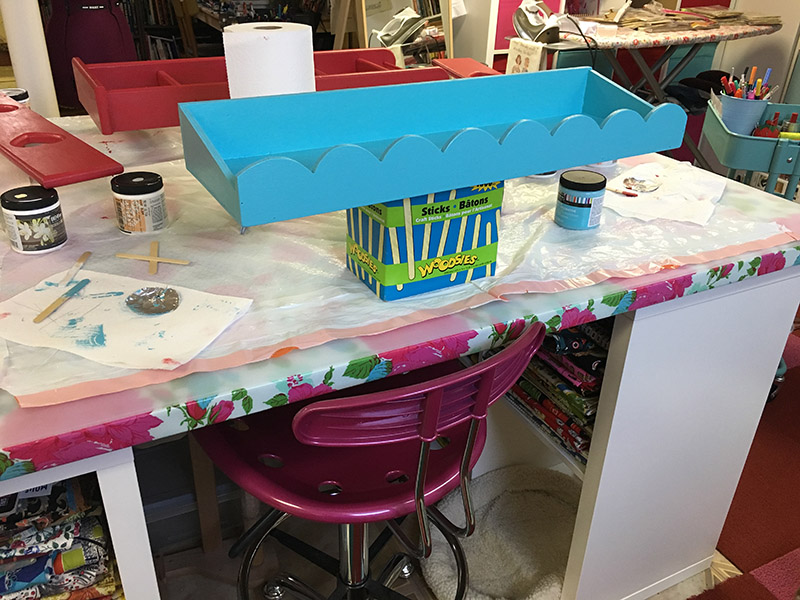 And all this painting has inspired me to do another thing I’ve been putting off for the two years since we re-did my space… paint that sewing patterns dresser. It’s just a cheap dresser from IKEA that I’ve used to hold crafty crap in since we’ve been in our house (6 years now), which then became my sewing pattern dresser when we re-did the space. (For reference no, it’s not ideal as the patterns have to go sideways which I didn’t discover until I literally put the patterns in, so it doesn’t maximize the storage as well as I wanted. But it was on hand and it works and fits the space!) So, I’m pumped to buy primer and paint for that project soon. I even ordered some travel-themed custom drawer pulls on Etsy that I’m really excited about, featuring European hotel labels. And along with it, I’ll be painting the naked wood chair that sits at my “messy” crafting table that houses things like glue, dyes, etc. for even more matching goodness.

I’m sure more ideas will come to fruition soon, as my head is suddenly full of all the ideas. It feels great to finally be inspired to work on this space, not just in this space. I love working in this space. I walk downstairs into the basement and it makes me smile just looking at it, even when it’s at its messiest and crap-filled. And now, it finally, finally makes me smile thinking about what I want to do to personalize it even more!