Boy, have I been busy these last several weeks! We’ve been knee deep in giving our basement studio spaces a BIG makeover. And suddenly the weather went from marginal spring (great to seclude yourself in the basement) to summer (oops, would rather be out doing fun things) in about 10 seconds flat, and I feel like I’m behind on literally everything. With a vacation coming in mid-June I suspect I’m going to feel like I’m behind all summer. Ah well, I’ll have to just enjoy the ride!

Today is the first of a series of posts I’m going to do about our basement makeover! Albeit a casual series, as I won’t be able to do the proper full final “reveal” until it’s all complete, which it won’t be for most of the summer yet as we fine tune. But don’t worry, I’ll soon let you see how it all looks now that the furniture part is done, since that was the biggest part of it. Even without even any decorations or art up at all yet, it’s about 5,000% better already! 🙂

Today you get the full back story and “before” photos!

Mel and I each have our studio work spaces in the basement: sewing and other crafts for me, art for Mel. But our spaces were a hot mess. My space was waaaaay stinkier and messier, I will fully admit. I have too many interests and a natural tendency to spread out to any horizontal surface within a 10-mile radius. If you live in Chicago, you should be surprised I don’t have crap sitting on your surfaces.

We kept saying “we need to organize in the basement”, but neither of us knew what we wanted and so we’d put it off. Until one day this spring, I think I must have reached the tipping point and just started going bananas measurements and plotting things out. If you follow me on Pinterest I’m sure you probably put my sewing and craft studio ideas board on “unfollow” because I was being so annoying with the excessive pins!

When we moved into our house a little over four years ago, Mel and I knew we each were going to take space in the basement for work areas (coming from a one bedroom condo, where we literally had no dedicated space). We have a petite mid-century modest house at about 1,130 square feet, but basements aren’t counted when they calculate that, and thankfully we have quite a big basement! Along with laundry, storage room, and an ugly-but-happy-to-have-it bathroom, the rest is mostly a big open finished space. Simple finished, but it has drywall, outlets, drop ceilings with fluorescent lighting, heating/cooling vents, three decent windows, and peel-and-stick vinyl tile on the concrete. Enough to make it perfectly serviceable as work spaces.

Here’s what the main area of our basement looked like when we moved in four years ago: 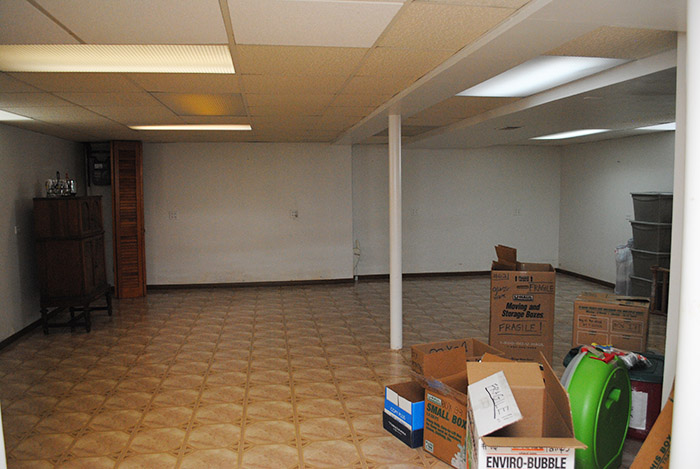 Kind of just a big box. (The photo was taken standing just past a wall opposite the bathroom.) In theory, that’s a good blank slate, right? For four years… not so much.

After we moved, we took one tiny stab at thinking about our spaces and then never really changed anything or explored further when we found ourselves complaining “I hate my space! I need…”. I had two long IKEA dining room tables theoretically for my cutting table, but gave myself no sewing space or working space,  so they ended up being my Everything Tables, with my sewing machine, serger, small cutting mats and everything else piled on. And I had one small dresser for storage of craft supplies. And that. is. IT.  Pretty soon there were piles of fabric and mending all over the sofa, stacks of fabric behind it, stacks of crap just everywhere. I had nowhere to put my resin crafting supplies so they lived on and under a dinette table outside the bathroom door, with one stackable storage unit under my sewing tables.

{{Edited to add: I completely forgot I did a post when we moved in about my plans for the space. Bwahahaha! The good news is that now, finally, everything I mentioned and more is accomplished in my new space!}}

And Mel’s space was one of the same dining tables plus a tiny desk crammed next to it, all along the same wall as me, even though we were essentially leaving half the basement empty. With paints stacked on top of paints, and sketch books and art resources everywhere. Plus, while we shoved in a stereo and record player between our spaces, we didn’t even have a place for the records themselves, so they were still in our storage room!

But I finally got a fire up my butt to do something about this. I was tired of difficult to work in, un-planned spaces and zero (zippo, zilch, nada) storage. So after spending several weeks daydreaming and planning and essentially living on the IKEA web site, finally mid-spring, we changed it all!

We kept most of what we were already using (and re-housed a few things elsewhere), configured everything in completely different ways, and expanded with massive amounts of storage. Plus, we finally got an entertainment space for our stereo and records, and bought a TV (which we’d wanted down there for years but had nowhere to put it).

Ready to see the “before” photos?! I didn’t tidy, folks, this is straight up ugly real working space. When you see people doing their “craft room before and after” reveals and the “before” is perfectly pleasant and organized and lovely and makes you feel bad about your own space… trust me, this isn’t going to be one of those times. 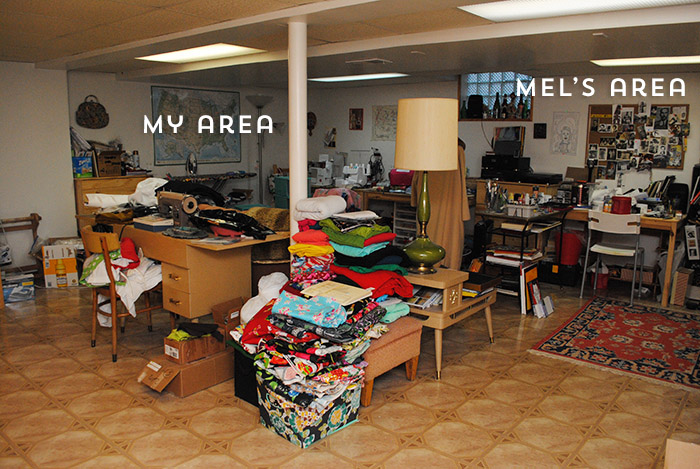 The above photo is looking towards our spaces. Mel’s art space is on the right. My sewing space is on the left. It flowed out behind the space with that hilarious towering pile of fabric and onto the desk for the vintage Kenmore I’ve yet to get repaired.

The below is my sewing area. This actually looks slightly worse than normal, as I’d already ordered a few organizing supplies (mainly those aqua bins) by the time I snapped these photos, so I’d just shoved them into my space when we started moving things around. 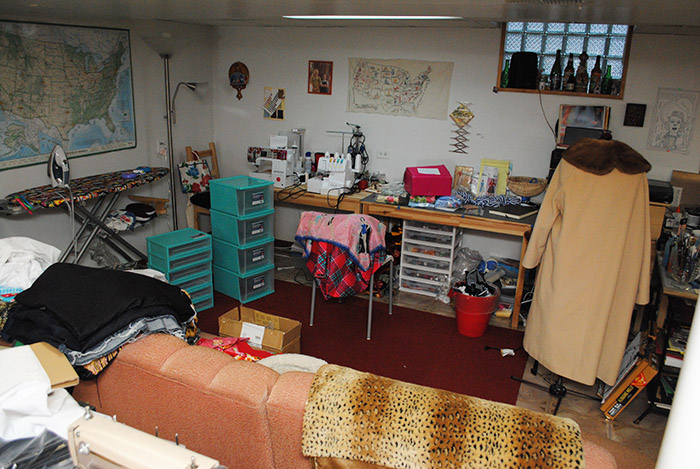 And here’s what it looks like standing at the edge of Mel’s space, looking towards the sofa. That dresser beyond it on the right was my literal only storage organizer for craft supplies… hence the endless piles on and under anything in sight. 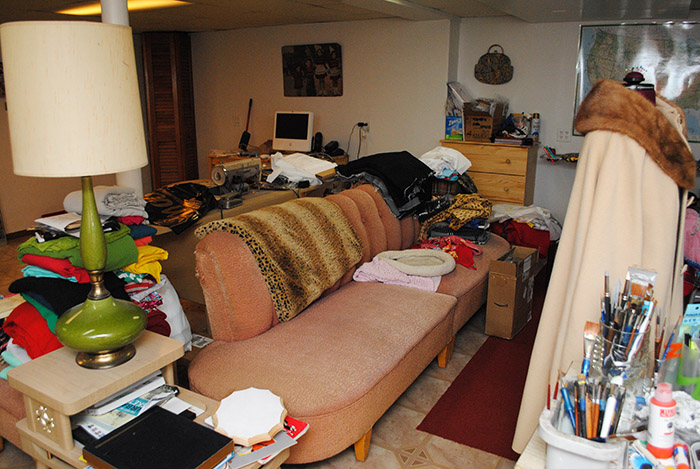 Honestly guys, I feel like I’m standing around naked in front of all of my friends here. This is so embarrassing!!

Here’s a look at Mel’s space, and the shameful way some of my books were being stored: busting out of milk crates like I was still in college or something. (Why they were next to one of Mel’s tables, who knows.) I mean milk crates for crying out loud. 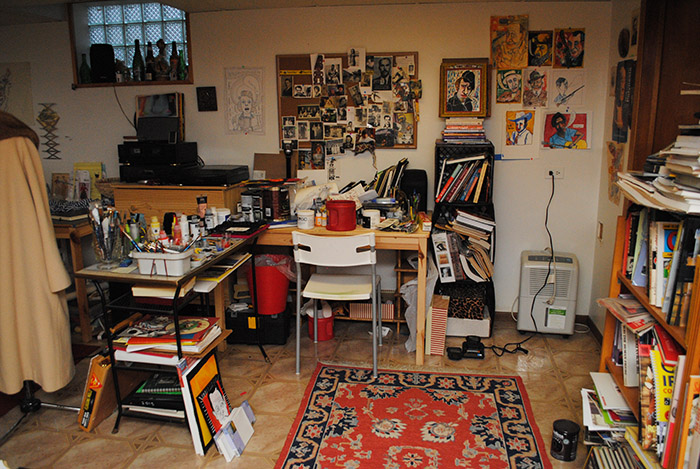 The rest of the books were stored equally poorly, in two seriously overflowing bookcases. We downsized bookcases when we left our condo and never upsized again. Because clearly we preferred to look like crazy people? 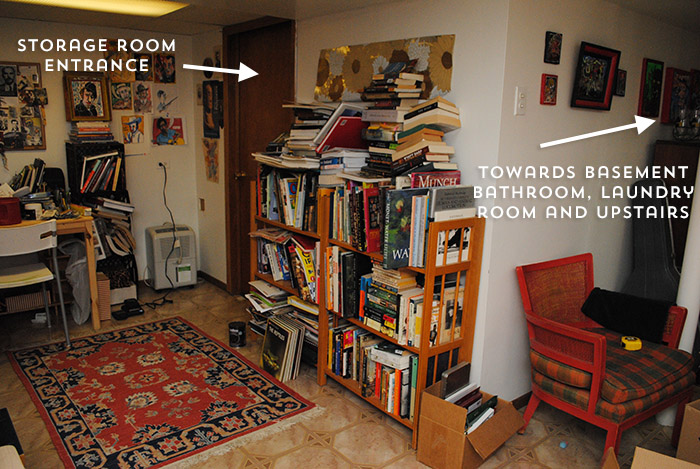 Remember how I said we basically crammed ourselves into one half of the basement, with the other half empty? Wasn’t kidding. You could have held a square dance or ceili in there: 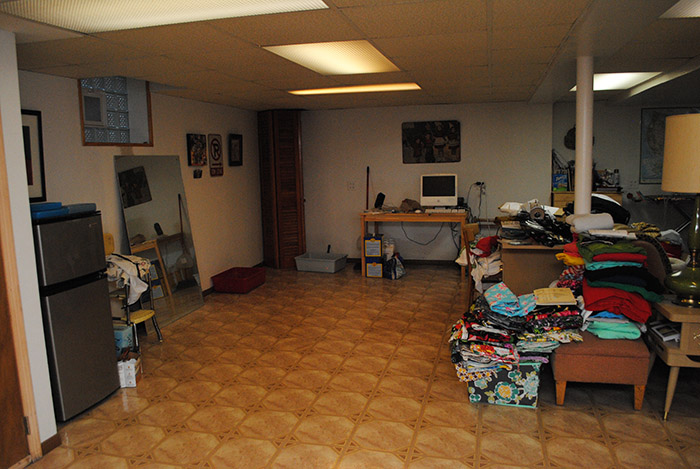 (Sorry, some of these pics are really dark as I just snapped them in a rush before the makeover began literally a few minutes later.)

That entire half of the room had a table with an old computer we no longer used (we did only for a short time after we’d moved in, so four years ago by now), the cat litter boxes, our bar fridge, and the giant mirror I used when sewing (which came out of our bathroom remodel). What a waste of space! 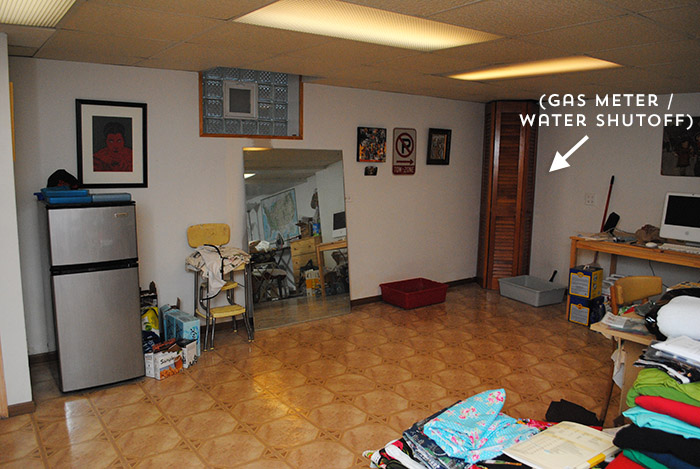 I think sometimes you need to use a space that doesn’t work well for you in order to come up with any kind of idea of what will work well for you. At least, that sounds like a good excuse for working in this space for four years, doesn’t it?! 😉 Oof! 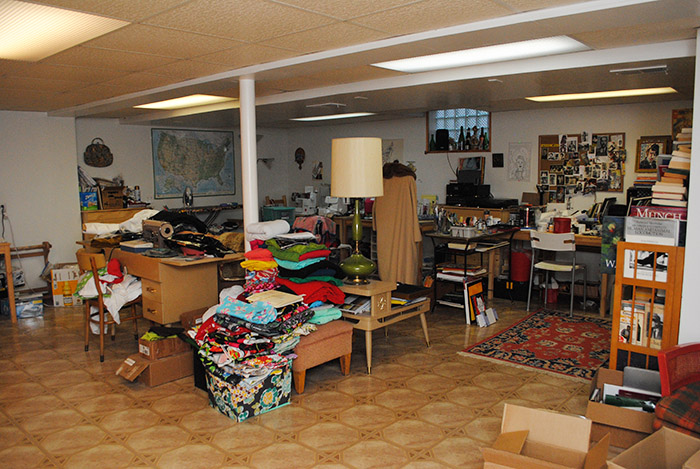 I’ve been thinking of this project in four phases:

Planning and execution are done, some of the organization is finished, but none of the decorating, which is what will truly make our spaces complete.

And that’s more than enough for this post! This is probably the most boring post of the lot for you, but fun (and cringe-worthy) for me to look at these horrible photo of what our studio spaces used to look like. Soon, I’ll show you the current state of things hovering around in Phase 3, but I still have to take photos of that. (But if you follow me on Instagram, you got to see a few looks along the way.)

I can’t believe how different the space looks now, and we’re not even fully finished!! I’ll leave you with a peek at my IKEA spreadsheet and the delivery of boxes… 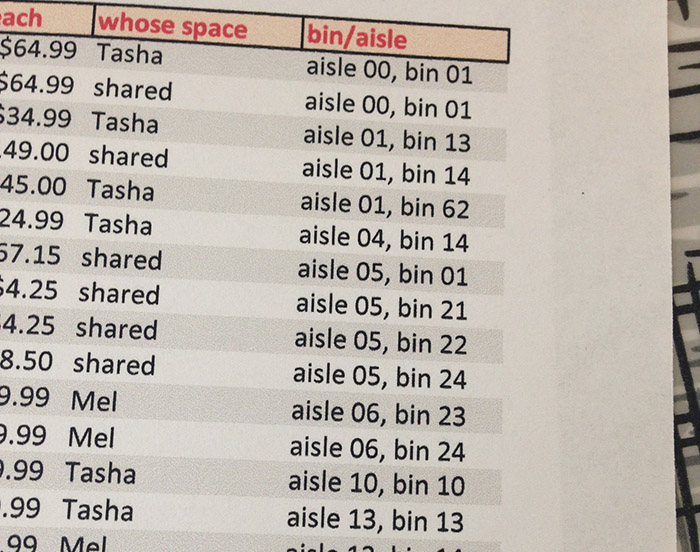 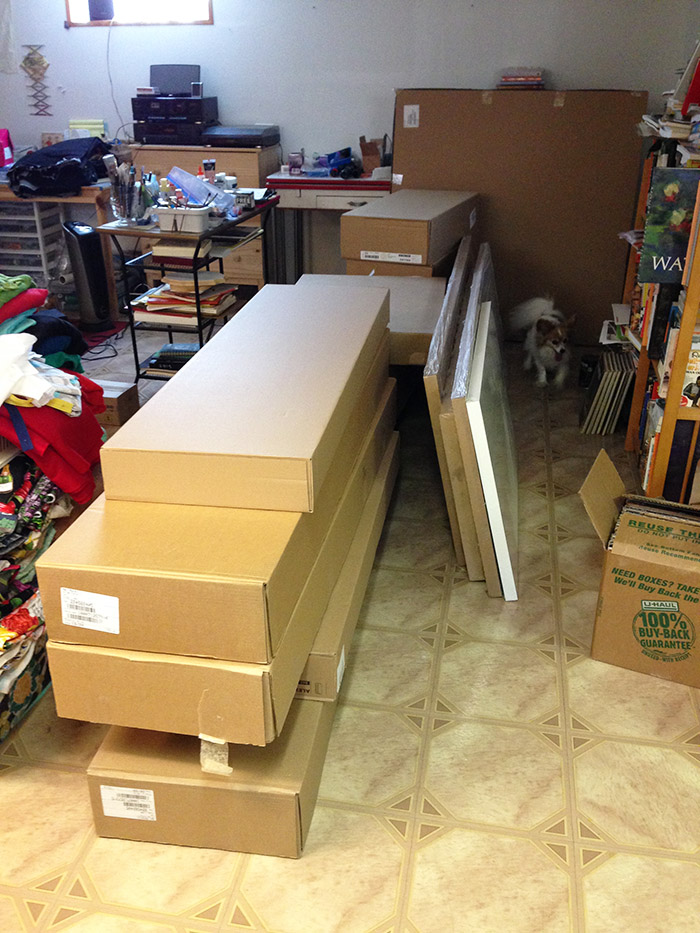 You won’t believe the transformation! 😀