A few weeks ago, we went over to our friends Ben and Elisa’s house. As it happened, their neighborhood was having a big yard sale earlier in the day that we couldn’t attend, but some people still were selling when we got to their house in the late afternoon.

Now, a house near them had recently been sold, as the 90+ year old woman who lived there was moving into a nursing home. And Ben and Elisa knew the house hadn’t really been updated in decades, so they suspected there was a chance there might be something Mel and I would like. So even though it was late in the day, we all walked across the alley to check it out.

About 20 minutes later, this was mine. 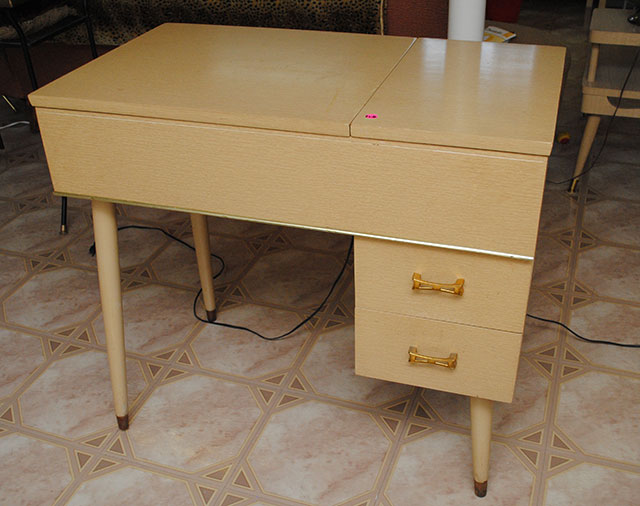 A cute vintage desk, right? Well as the title of this post would lead you to believe, there’s more to this desk than initially meets the eye. 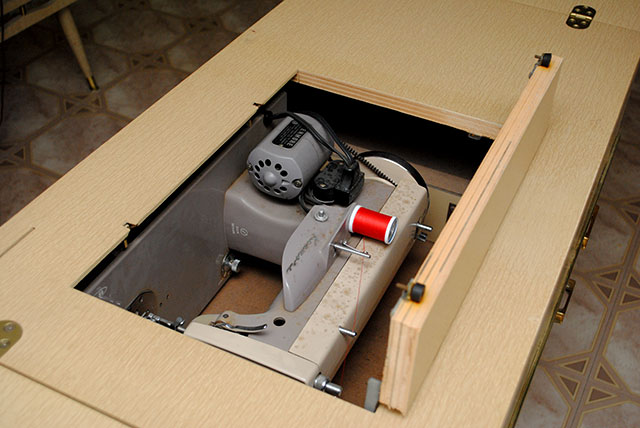 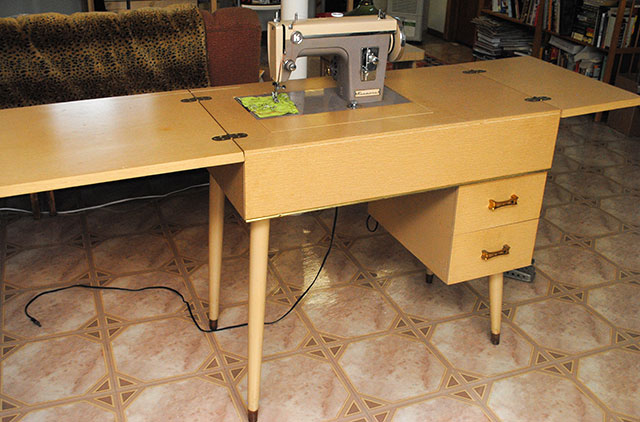 The machine is a Kenmore Stylist 86, and from researching the model and serial number, it was made between 1959-1963. It came with an accessory box marked 1960, so I’m guessing that this machine might have been from 1960 (or at least not earlier). My mom also backed this theory up as she thinks it’s possible this was the same machine she learned to sew on when she was very little! She knew it was a Kenmore and recalled the sort of underwhelming pinky tan colors, and that it was from 1960. 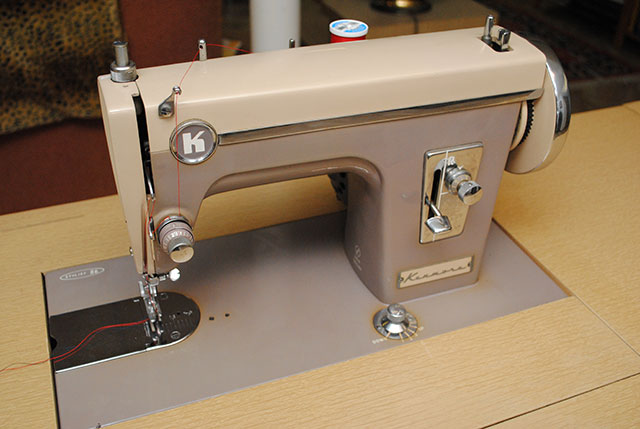 Speaking of accessories, the drawers were full of lots of fun things, including the original manual, yippee!

But the best thing was a complete box of Kenmore Sew By Color accessories! (This is the box marked 1960, by the way.) 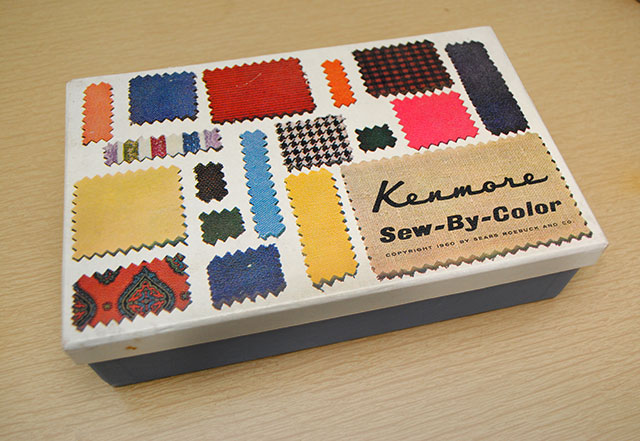 Inside, all of the feet and accessories (like a cloth guide) are color-coded. And for each item, there’s a color-coordinated card explaining how to use it! Which is good, because some of these things are completely unfamiliar to me. 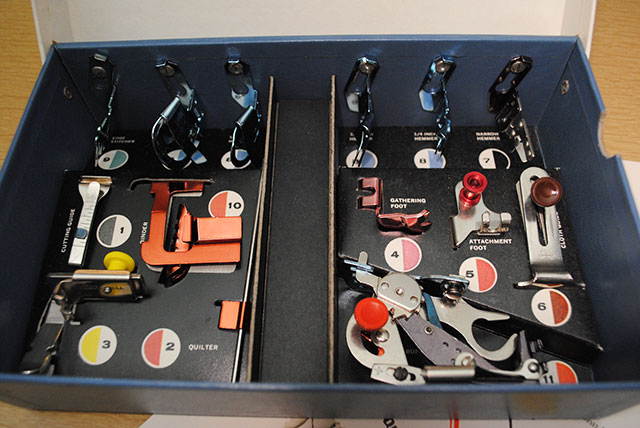 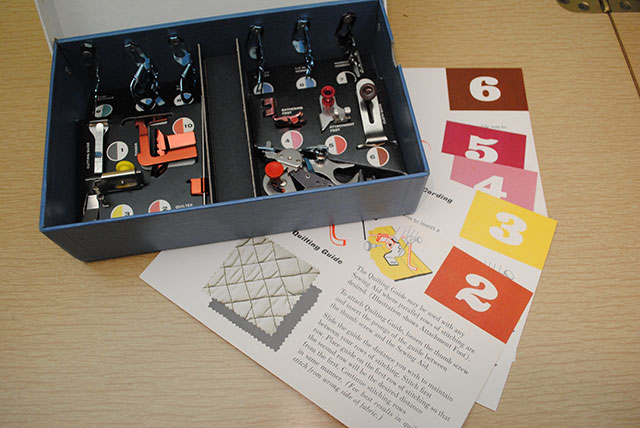 Fortunately, my sewing area is in our semi-finished basement, so I had room to grow with an entire new sewing machine table, otherwise I would have had to say no to this great find. I still need to put together my sewing space in a way that works better than piling every available surface with stuff using a hodge podge of furniture. We really need to investigate storage, bookcases, etc. for the whole basement. But right now we’re focusing on finishing up some things upstairs first. (I kept my promise and we bought paint samples yesterday and are painting our bedroom and the den this weekend!) So in the meantime, this is just sitting in the middle of the room. But we’ll get there! 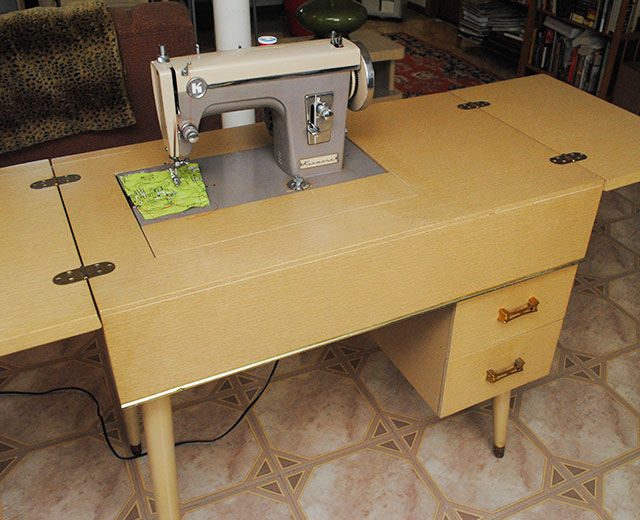 Now the ultimate question: does it run? Kind of. There was something tripping up the lowering of the needle after a few test stitches. Fortunately, there’s a sewing machine repair place near us, who didn’t even bat an eye at the thought of repairing a sewing machine from 1960 (he said they had parts dating back to the 1800s). I was going to have to take it in to get a tune-up anyway, so now they’ll be able to get it in proper working order. Although getting the machine there will be a feat in itself—holy crap, now I know why people love vintage machines. This thing is a tank!

And while the machine itself isn’t particularly exciting to look at (not like a pretty mint green or blue like some of its vintage peers), I do love the very modern Kenmore logo on it, and the completely swoon-worthy cabinet it’s in!

The mid-century modern style of the cabinet is so perfect to me. In fact, just behind it you can see a tiered end table we have that’s a great match (the end table has matching ones upstairs in our den). 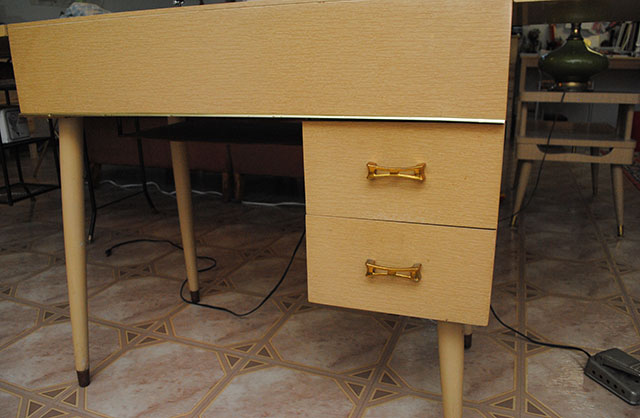 And oh how I adore those bow-shaped drawer pulls! They were the first thing that sucked me in. Or maybe it was the sewing machine itself. Or the cabinet. Whatever, it’s a fantastic package all the way around! 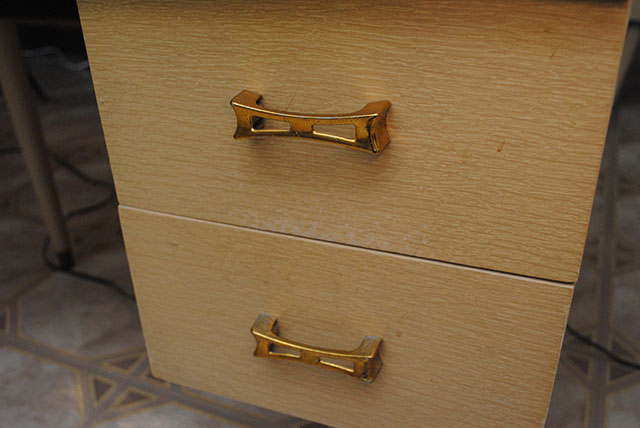 Those in the U.S. will recognize Kenmore as a Sears brand name, and in my neighborhood there’s a huge flagship Sears that opened in 1938 (it celebrated 75 years at its location last year). It’s undoubtedly where this sewing machine was purchased by the original owner in the early 60s, as her house was just a few minutes away from the store. And now the sewing machine is just a few minutes further away, at our house. I think that’s pretty neat!

While I haven’t been able to use it yet, I already love this machine and how I acquired it. The story makes it way more special than just being a great deal. I can’t wait to get this sewing machine fixed up, and take her for a test drive!