On Monday, February 1st, I’m going to kick off a little sewing miniseries on my blog! I came up with the idea out of the blue, because I have a sewing pattern I’ve been totally obsessing over for the last month and a half (if you follow me on Instagram, you may have noticed!). I’ve sewn up 4 different versions (hopefully a 5th by the end of next week) and worked out two big pattern hacks/modifications, and thought hey, why don’t I spread the love out over a week of posts? 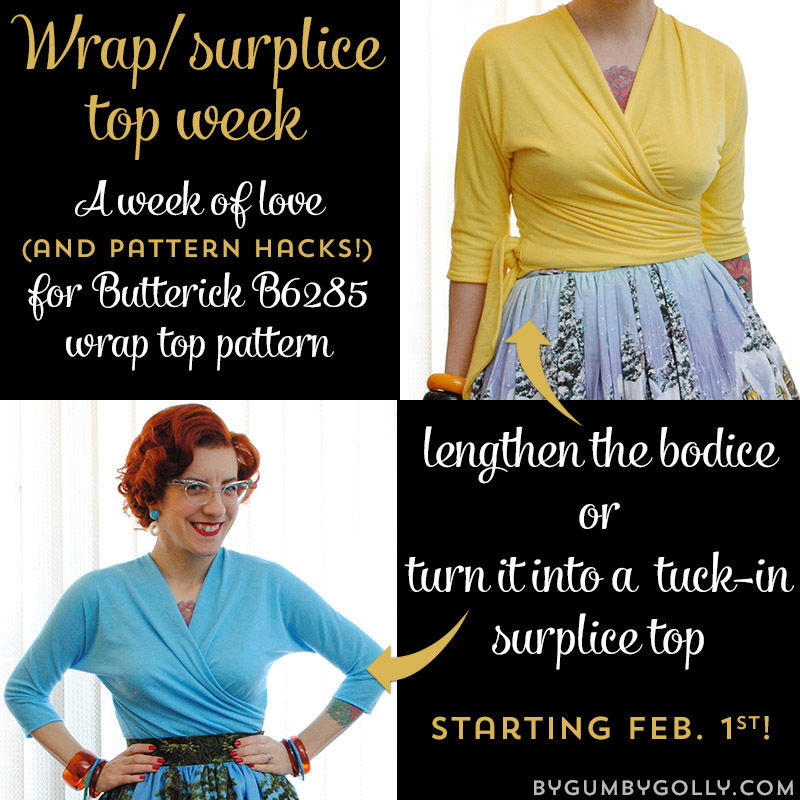 It all started with Butterick B6285, a “patterns by Gertie” (Gretchen Hirsch) Butterick pattern for a wrap top. She announced on her blog back in November that she was going to do a sew-along for it, and a few posts in, I became enchanted.

You see, I had completely overlooked this pattern when it was released! I think because it was sewn in a busy print on the pattern envelope, and that made me have a hard time “seeing” it: 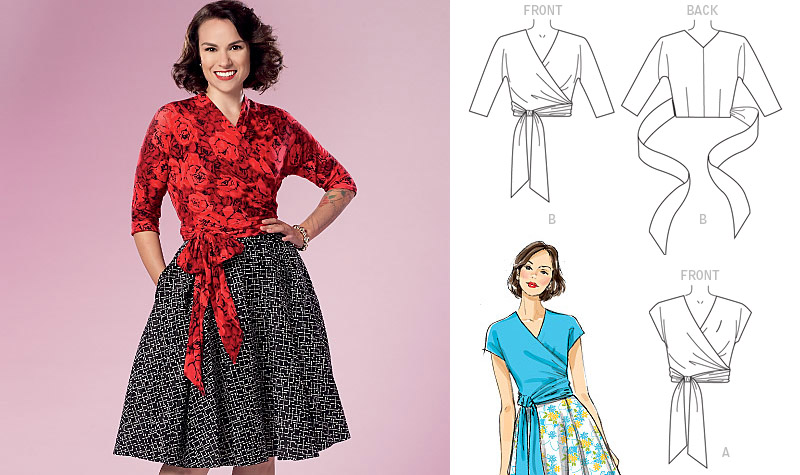 The patterned fabric threw me off, as did the long ties in a bow at the front, even though it wasn’t that long in the envelope artwork, and there was a line drawing to boot. For whatever reason, none of it grabbed me at the time it was released. (Which is kind of hilarious to me now as I embark on a week singing its praises and I’m already planning many more versions.)

But it all changed when I saw Gertie’s gray version on her blog on one of her inspiration posts during her sew-along where she knotted the ties in the back:

Boom. This was the game changer! (And a reason to love sewing blogs for inspiration!) It was at that point that I saw the potential for it to be a serious wardrobe staple for me, but with one major change: that tied-in-the-back photo planted a seed in my head… because what I kind of most wanted was a top that didn’t wrap around with ties at all, but actually tucked in. A stretch knit, vintage-inspired surplice top!

But first, I would need to make up the pattern like originally written, although I did make one personal alteration and drastically shortened the length of the ties (I’ll talk about that next week, too). Then I spent a couple of versions hacking away at my surplice-top idea. And then, because myself and others who sewed the original wrap top found we wanted it just a biiiit longer since it’s truly waist-length (but it’s more complicated to add length thank you think), I worked out a way to lengthen the bodice of the wrap top, too, which ended up giving me an idea to better my surplice-top hack.

So it’s just been a rolling wrap/surplice top snowball of love lately around my sewing area!

Here’s what I’ll be sharing next week:

Stay tuned for more next week! Have a great weekend!