Today is my first post in the miniseries I’m doing, that I told you about Friday. Let the wrap/surplice top week begin! 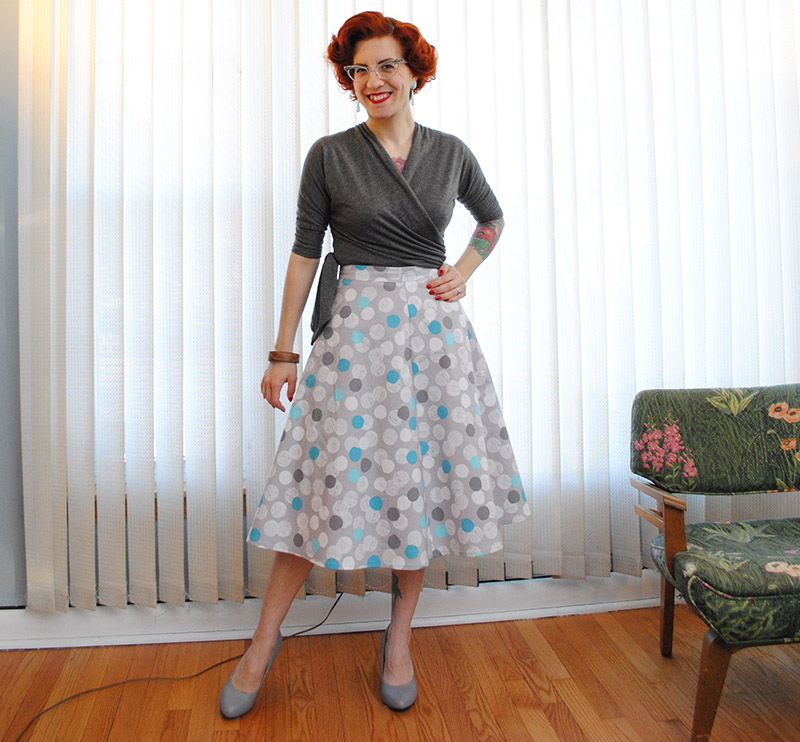 wrap top – made by me
skirt – made by me (vintage Simplicity 4812)
shoes – Chase & Chloe, via Modcloth
wood & resin bangle – Vintage Garage flea market, Chicago
resin earrings – made by me

This is Butterick B6285, from the “Patterns by Gertie” line for Butterick, by Gretchen Hirsch, and is a self-lined wrap top pattern for stretch knits. You’re looking at my very first version, which except for the tie length (explained below) was sewn up with no other alterations. For my future versions, I added about 1/2″ of ease to the sleeve, because it was so constricting on me below the elbow that I have to wear the sleeves pushed up a bit.

I used a thin (but not sheer) rayon spandex jersey from JoAnn Fabrics. Michelle commented recently how their knits game is pretty good lately and she’s right. It was a great choice, I really like the fabric and the result. This pattern would make a lovely even warmer top if the fabric were thicker, although bulk would start to be an issue since it’s lined. But but! There’s nothing to say you have to line it, you could simply omit the lining and just finish the inside seams (or trim them, since hey, it’s a knit). Imagine it in a sweater knit! And short-sleeved and unlined would be a nice cover-up in summer. But back to the original self-lined way, it would be nice for those really sheer jerseys that they market for “layering tees” but always come in nice colors. So it would just be “layered” with itself. 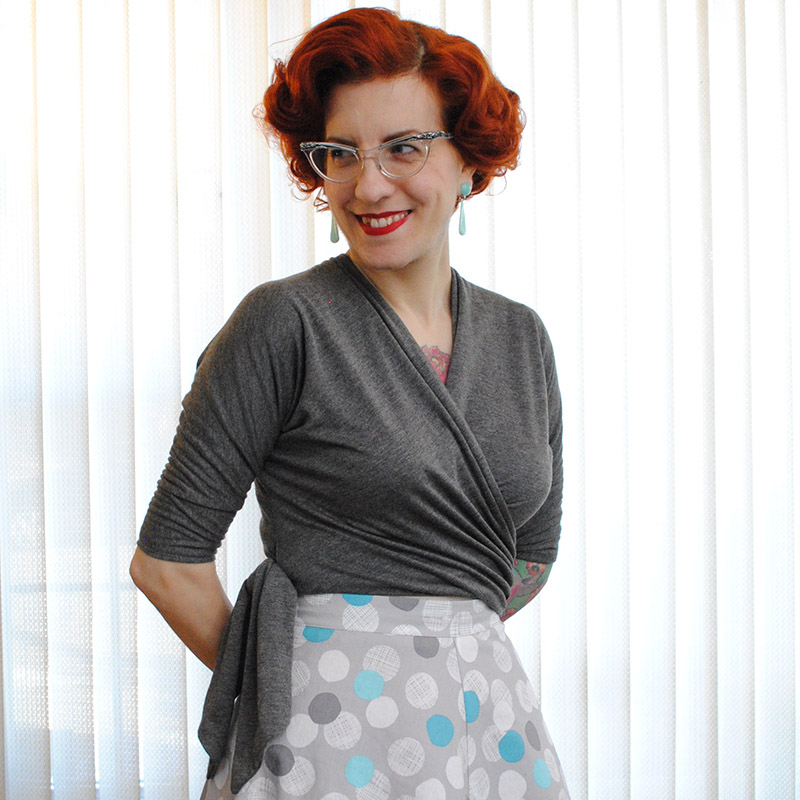 I really love the overall shape and the cut-on sleeves, and other than the tie there’s only one pattern piece: the front and back is all together, and you fold it over to form a seam under the sleeves. Makes for a cumbersome pattern piece to manipulate but clever to sew up. 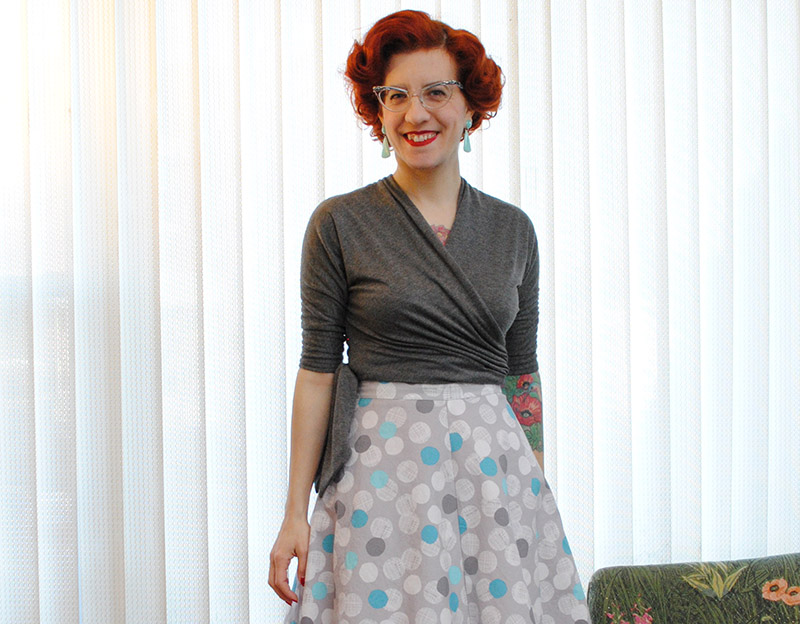 You might not necessarily think to notice until I point it out, but this pattern is quite short: it’s meant to hit at your waist. (You can tell due to the “waist line” marking on the pattern piece basically being within the seam allowance.)

Now I am short-waisted, often shortening bodices anywhere from 1 – 1.5″, and the length of the bodice hits my natural waist. I suspect if you have a long upper torso, it might come up even shorter.

The waist length isn’t so hot when you’re trying to wear it with a skirt or pants and not have the waistband show, unless you like fussing with your clothing a lot. In these photos, I’m wearing a skirt that hits at my waist (technically my first Vintage Pledge item of the year, from 1950s Simplicity 4812). I think perhaps if my skirt had a super tight waistband (as in possibly negative ease) or sat slightly higher up, it might all stay put a bit better, but basically with this particular skirt, you could see part of my waistband showing in every photo. 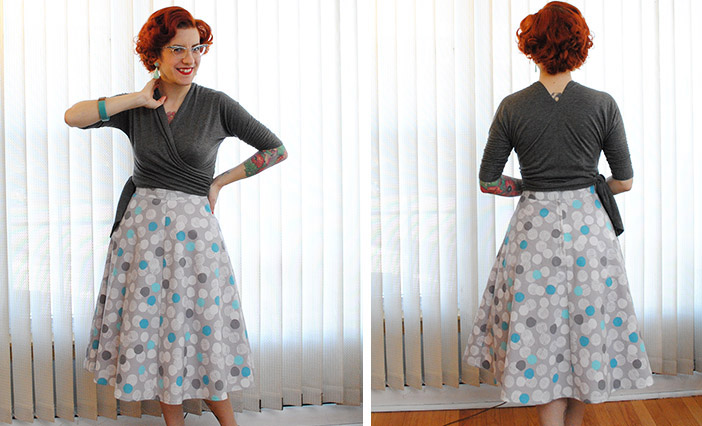 However, where it’s a downside with a skirt, it really shines with a dress: the short length is absolutely ideal to wear over dresses. It can totally transform a dress into a skirt and top combo, which I think is a clever way of expanding your wardrobe with just a quick knit top. I love the result! 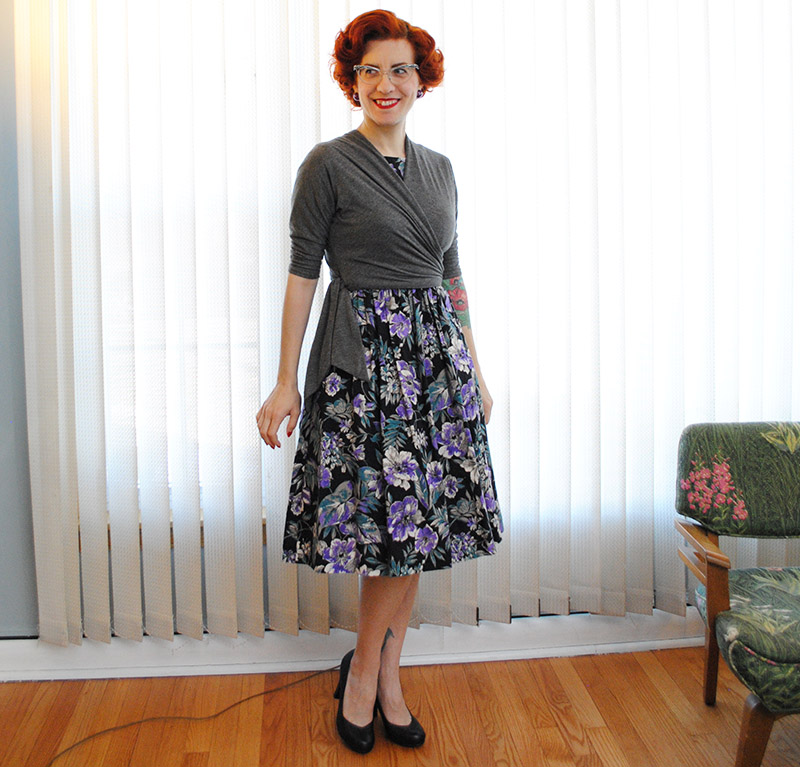 I wore it over my very first Emery dress which has this odd putty color in the vintage fabric print, and works nicely with the gray. I actually don’t wear this dress often because the colors don’t really suit me as a redhead now, but with a top over it, I actually quite like it! 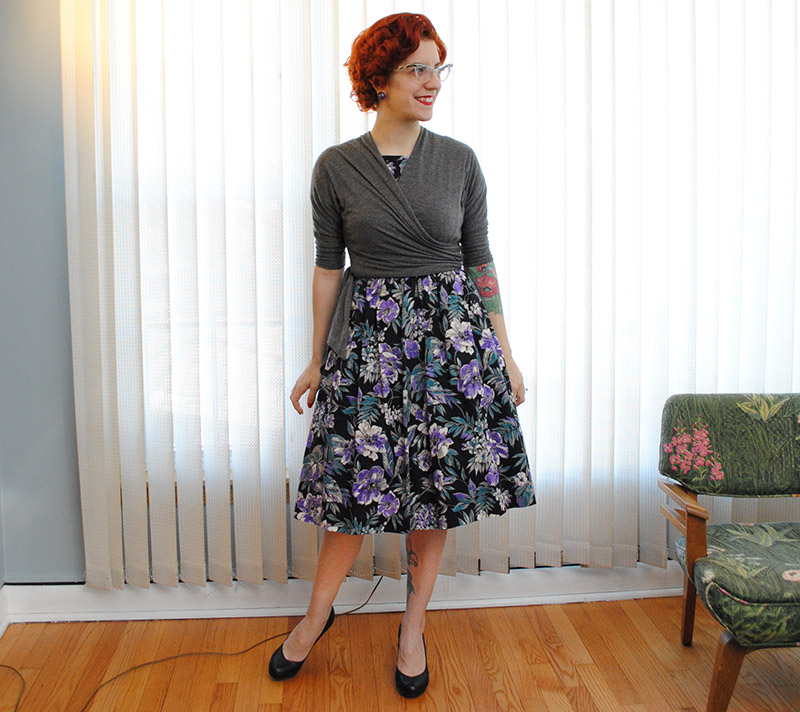 You may notice that the ties on mine are a lot shorter than in the pattern, and that’s because I cut a lot of length off them. At the step when you baste the ties onto the bodice shell, I tried it on, and couldn’t figure out how I wanted to wrap the ties. Leaving them long means you can kind of wrap them a little lower than the hem of the top, effectively lengthening the silhouette a bit, but move around too much and it won’t stay like that. I just felt the ties were too long, for me personally, after fiddling with them for awhile.

I actually really like the idea of them tied at the side back and much shorter, like Vera Ellen’s red and black polka dot wrap top in White Christmas (I believe she’s wearing a little matching dickie underneath): 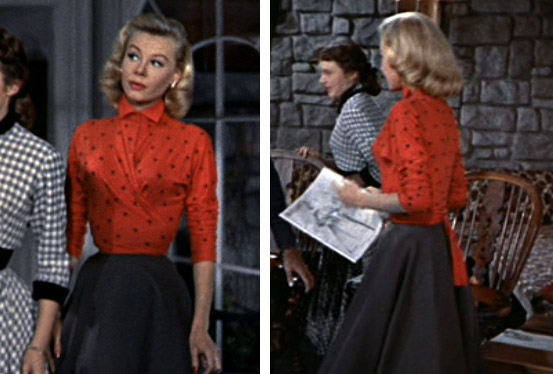 So I tied my top at the back right, and stuck a pin into each tie at the finished length I wanted them to be. Then I unpicked my basting stitches, and cut the ties down. This now meant they were different lengths, so I figured out what I cut off each end and made new tie pattern pieces to match (I think the final lengths were about 26 1/2″ and 17 1/2″).

I made sure to note that the tie attached to the right side of the bodice is the longer one, since it wraps from your right side around your front to your back all the way back to the right side, and the tie attached to the left side is the shorter one, since it wraps from your left side through the hole in the right, only to the back right. And voila, ties long enough to hang in a knot, but not accidentally get dunked in the toilet *ahem*. 😉 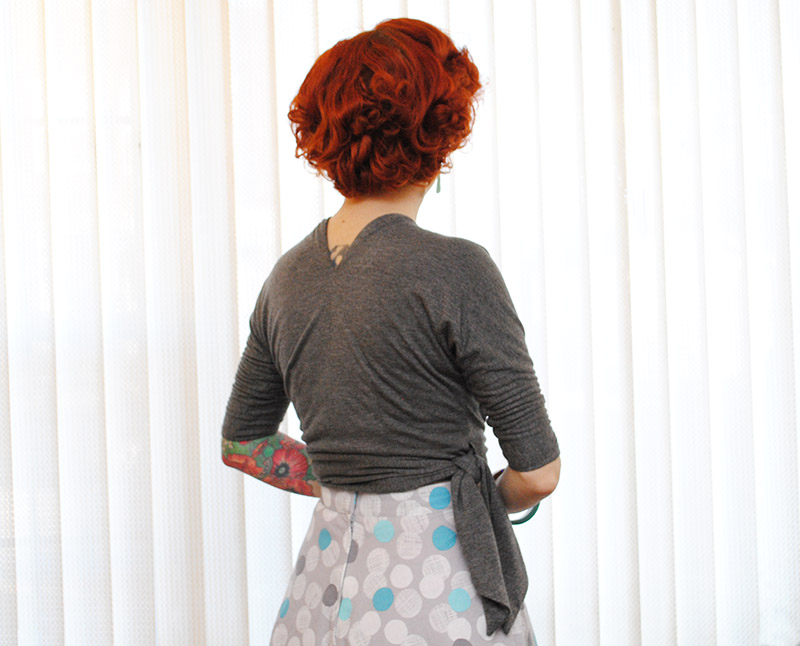 You know from my intro to this week of wrap/surplice top love, that I lengthened the bodice in my next version, and that will be Wednesday’s tutorial! I decided if I wanted to wear it with pants or skirts, I’d need to add a bit of length, and so I did that on my second version, which was in a modal/spandex blend in a cheerful yellow. 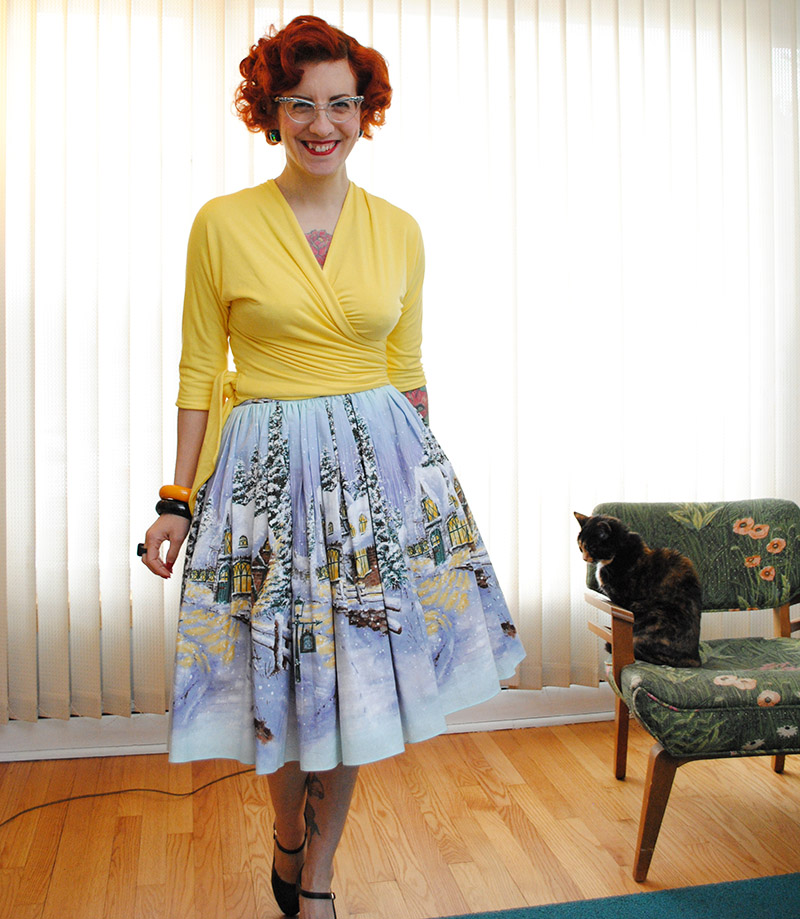 And yeah, I had a little helper nearly the entire time I was taking photos! Thanks, Dinah, for your vote of confidence! 😉 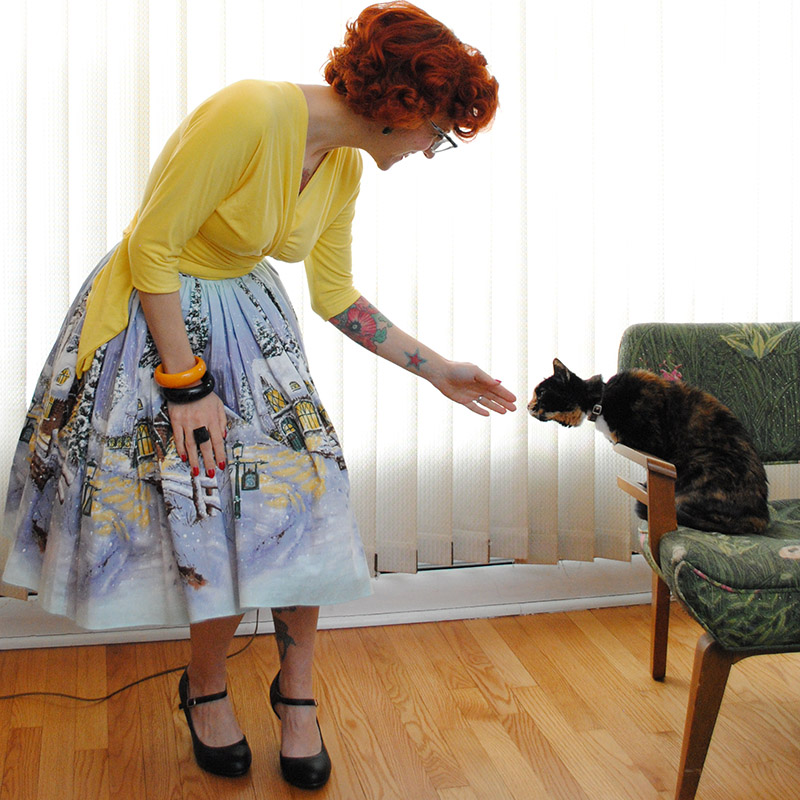 This version is 2″ longer, and that makes a big difference. Here I’m wearing it with a Bernie Dexter dress actually worn as a skirt, with the bodice tucked into the skirt. 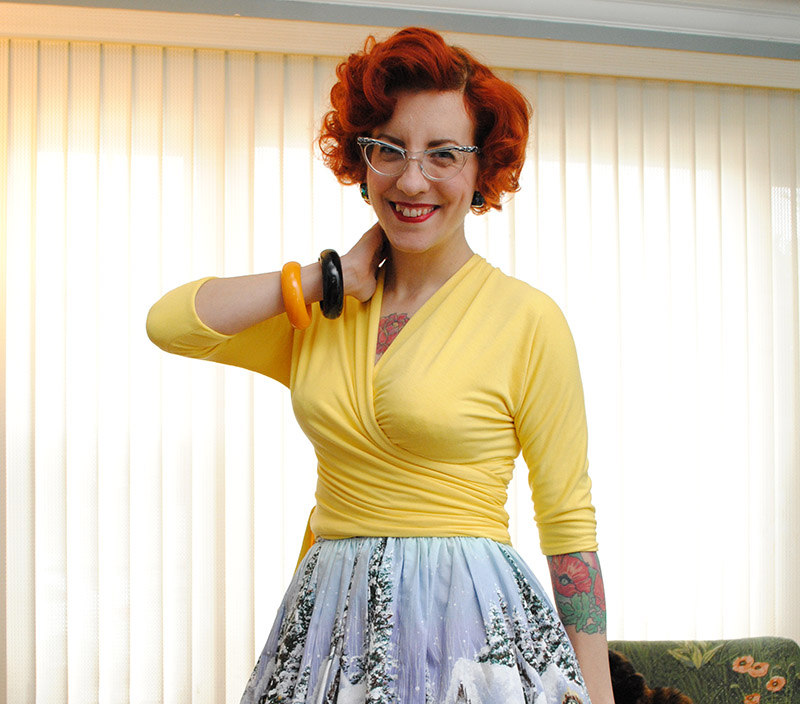 Due to the way I decided to lengthen it, I decided it would be best to remove the waist dart at the back, so there’s no darts at all in my yellow version. 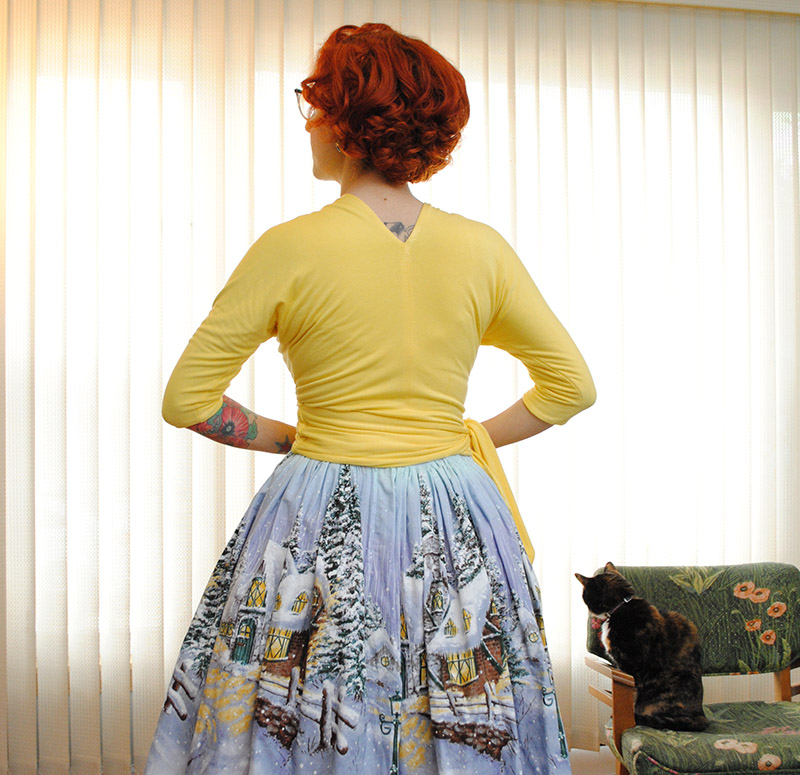 Side by side, hopefully you can see the difference 2 inches makes: 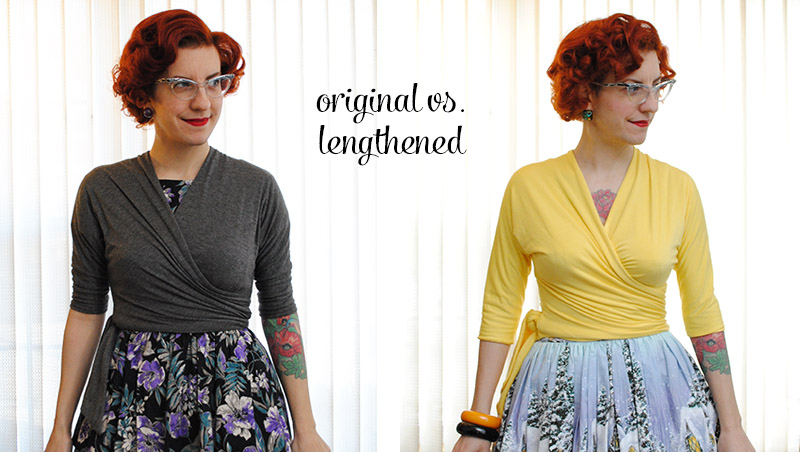 I’ll definitely still use both renditions of the pattern—the original (shorter) length if I’d like to make a top to wear exclusively over dresses, and the modified (slightly longer) length to wear with pants or skirts. The longer torso was a bit more difficult than adding length at a lengthen/shorten line (which as I said, didn’t exist), especially because the back is shaped with a waist dart. But I’ll talk all about how I worked around that on Wednesday!

The only downside I’d say to the longer version is that it does put a bit more bulk at your middle, so if you’re sensitive to that, you might want to make sure to pick a thin fabric or maybe one with a higher stretch content, and/or lengthen the hole that the wrap passes through, so it doesn’t bunch up at the side (I thought about that only after topstitching the hole, and wasn’t going to rip it out).

While it’s more bulky, it does sort of pull everything ‘in’, so to speak, which is kind of nice! 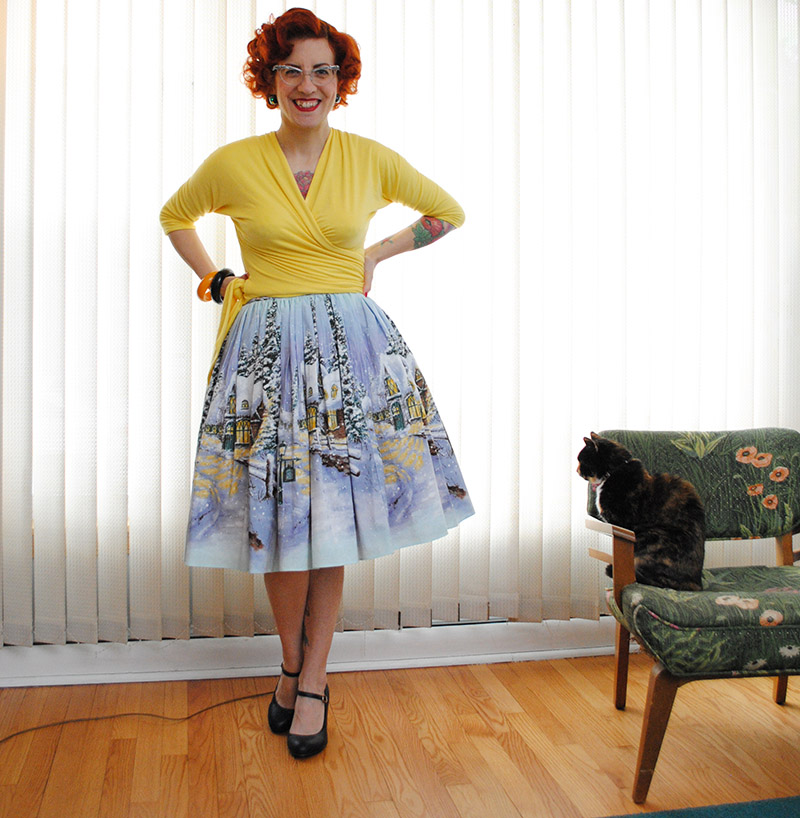 Tomorrow, I’ll be sharing my first two versions of turning this pattern into a surplice top that tucks in, instead of wrapping around with ties. I’m SO excited to have worked that out, I can’t wait to share it!