This fall I’ve been on a knitting roll, which happens to a lot of us knitters when that season hits. I finished off one old project from the spring, I’m working on finishing another from the spring, and just this week I finished one from literally 4 and a half years ago. Seriously!

But this one is all new! I bought the Ten of Hearts cardigan pattern from Bex‘s Etsy shop awhile back. I would guess it’s from the early-to-mid 1950s, and features 5 hearts running down the front of both sides, hence the name, Ten of Hearts. It’s in worsted weight at a gauge of 4.5 stitches per inch, so it whipped up quite fast. I think I finished it in about 2 and a half weeks.

Don’t mind the fact that I may look wet, freezing or wind-blown in these photos, because I was all three! And apparently it made me slouch in every. single. photo. Really, my shirt doesn’t do that usually. (Boy I hope it doesn’t.) 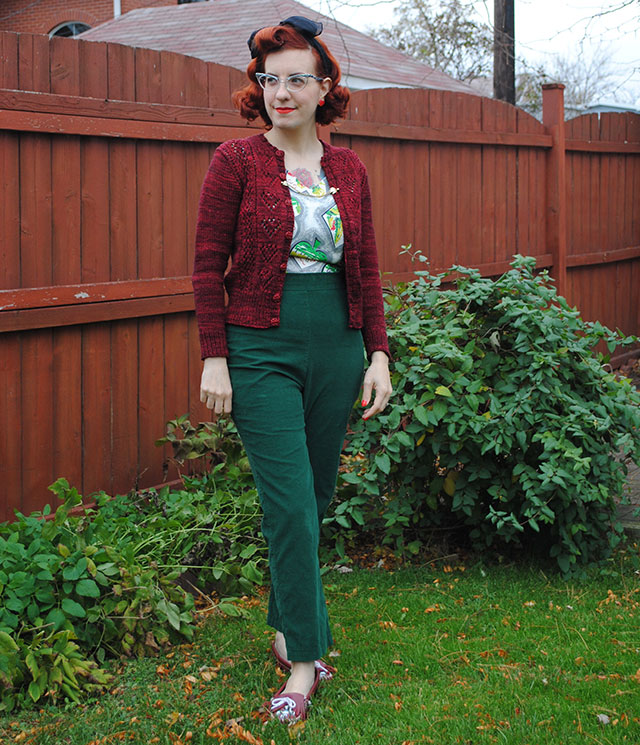 Anyway, because I can’t seem to leave well enough alone, I decided I’d like to add the lace and hearts panels to the back, too, which was otherwise supposed to be in plain stockinette. Since my row gauge was tighter than the pattern, it’s actually the Twenty Six of Hearts cardigan, as I have 6 down each front not 5, with 14 on the back. Not that anyone’s counting. 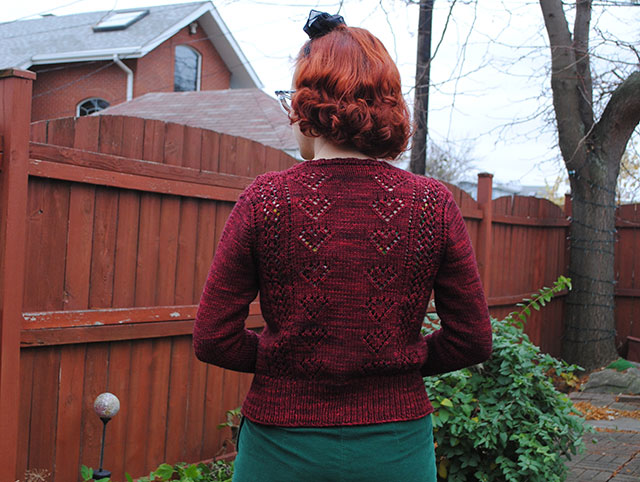 I love those back hearts! Essentially I just flipped the chart (yes I charted it—can’t stand knitting lace with written instructions) so that the back mirrors the front, minus the opening for the cardigan, of course. 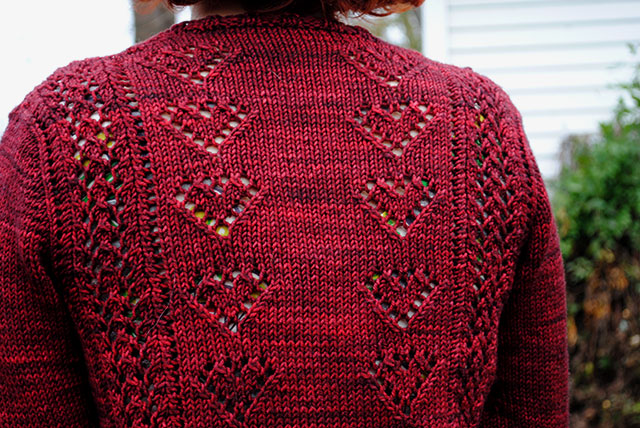 And with all those hearts, I had to top it off with vintage heart earrings, right? Right. Of course, in the only photo that actually shows my earrings, my hair is trying to run away with the wind. 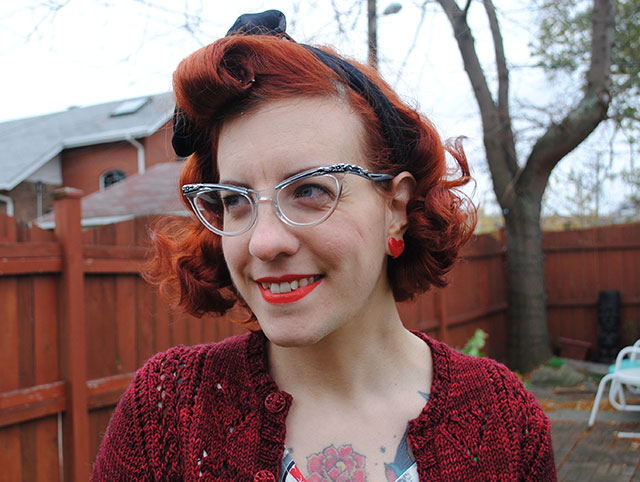 And never one to miss an opportunity to theme it up even more, I wore a blouse from DesiRoo Clothing underneath, made from a vintage fabric with little playing card suits on it. You can’t really see a heart unless I move the cardigan, but they’re on there. So cute and kitschy! (FYI, this is her tie shoulder top style, with the ties untied and tucked into my bra straps. How’s that for a classy way to get more seasons out of it! 😉 ) 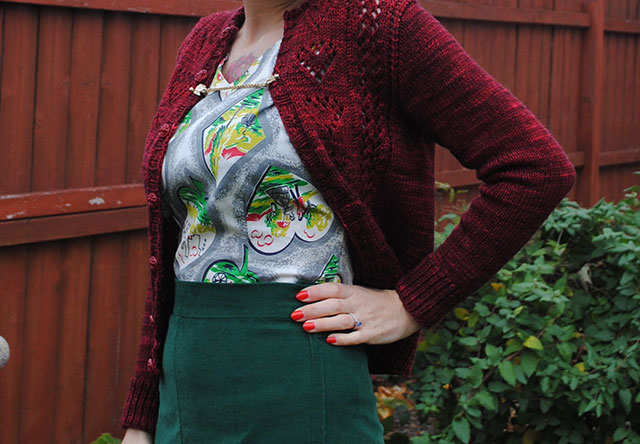 Other than adding the lace to the back, I actually knit the cardigan as written. Mostly. Except for knitting the sleeves top down, and working normal picked up button bands (and putting the holes on the wrong side, oops) because I didn’t feel like knitting them and then sewing them on. So yeah, that’s about as “I actually followed a pattern, guys!” as it gets for me. I’m an unrepentant pattern hacker, what can I say. 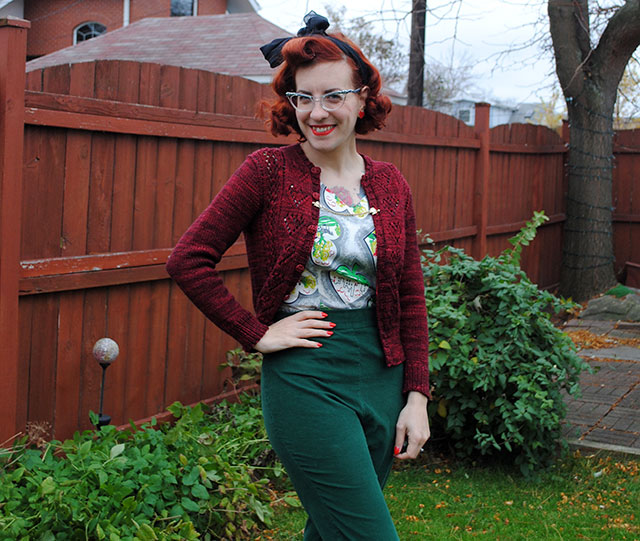 One thing I knew going in and didn’t change and am perhaps slightly regretful but don’t really care that much anyway (how’s that for a wishy washy opinion): the shoulders are quite wide as the pattern is written. Way wider than I normally knit, combined with very shallow neckline shaping. But I liked the idea of the lace panel not getting eaten away with the shoulder and neck shaping, so I knit both areas as written. Gives it a bit of a drop-shoulder effect unless I really hike it up onto my shoulders, but I don’t mind. 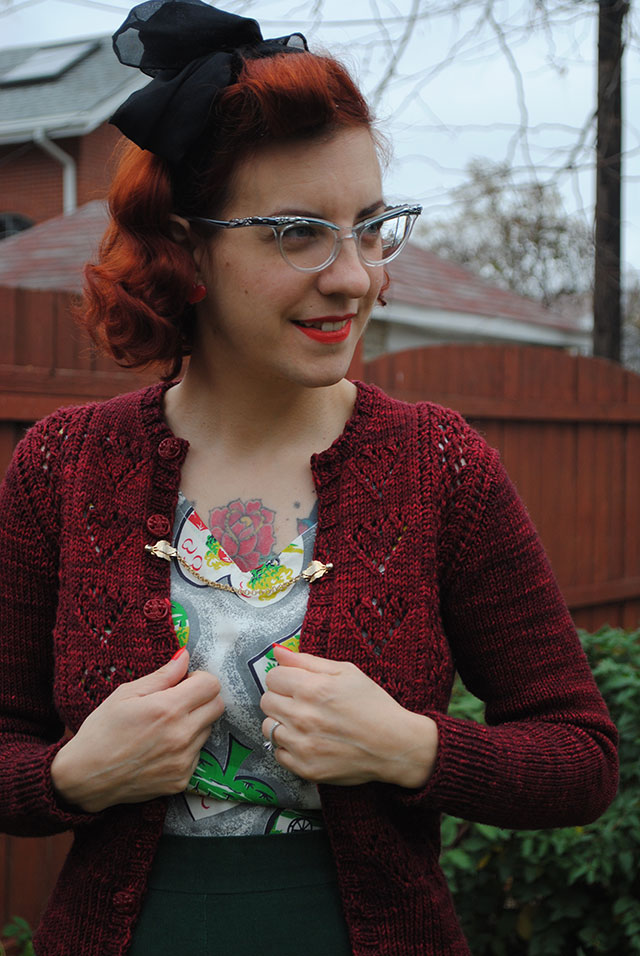 The yarn is Madelinetosh Vintage, a lovely worsted weight hand-dyed yarn, in the colorway Tart. Now the Madtosh web site shows single ply photos for vintage—it’s not a single ply! That’s Tosh Merino, I think. So here it is from Eat. Sleep. Knit. showing the right type of skeins. I’d had this yarn in my stash for years and had tried to knit it up at least twice to no avail, so I’m thrilled it finally turned into something I love! 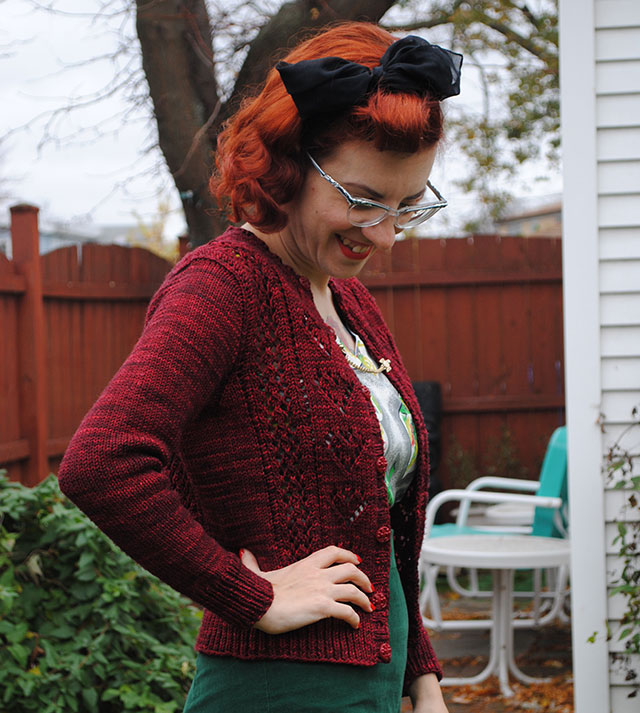 When I was finishing this cardigan, I started to think about buttons. The red is a much darker red than I normally go for, so the odds were slim I’d have something in my button stash. But I did! The only dark red buttons I had, which were vintage plastic ones with little berries and leaves that I picked up who-knows-where. And they’re perfect. Totally meant to be!

I paired the cardigan with trousers you haven’t seen. They’ve actually my second pair of Gertie trousers (i.e. Butterick B5895, you saw pairs #1 and #3 this summer), made up in corduroy, with slightly less slim legs than my gabardine pair, because… it was three months ago, I have no idea why. Probably because I tweaked the fit in the calf by version #3, although it looks mostly the same to me, when I compare photos. 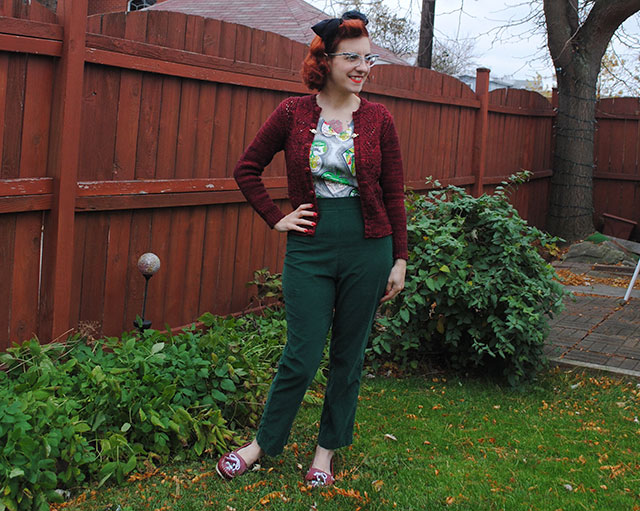 I still haven’t worked on any more fitting issues with these, and frankly had mostly forgotten about this pair since I sewed corduroy pants in August, so it’s not like I got to wear them once I finished. But now they’re just right! Well, verging on no longer appropriate, as the temps dip and they skim my ankles, and my feet are cold! I was glad to find out they fit a bit better than I recalled, although throwing them in the washer and dryer may have helped with that. I always forget corduroy likes to bag out… I really need to not sew with it, honestly. I always love it in theory and then get angry with it. 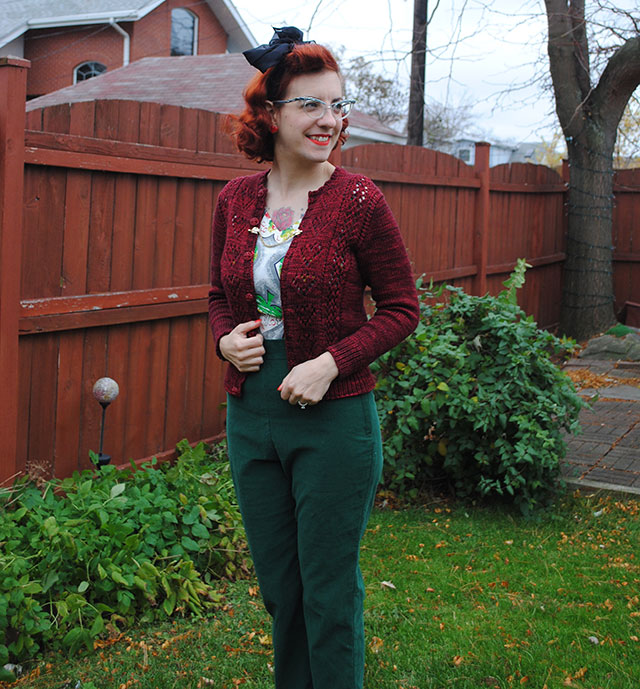 I really wasn’t kidding about it being windy, raining, and cold. I spent about half the time taking these photos looking like the below, either trying to catch my hair flying away from my head or just waiting for the gusts to stop. Delightful! 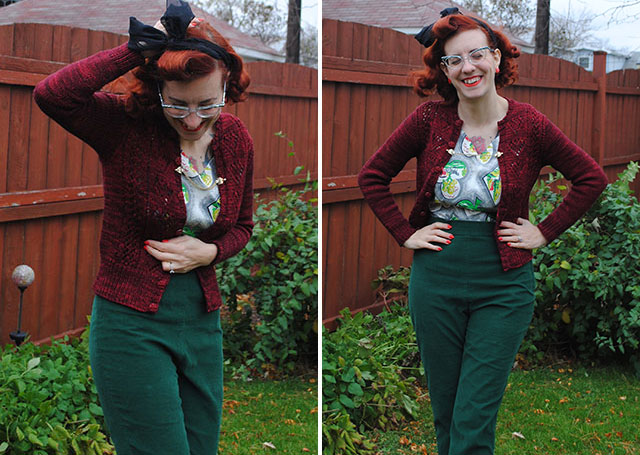 Anyway, I absolutely adore my new cardigan, and think it’ll be perfect for fall and winter. And the trousers are reminding me that I do really like this pattern, and need to sew more versions! Although I think I’m mostly convinced I like the fit of my red stretch pair best (which used a pattern size down in most places), so I may be sticking to stretch woven versions in the future.

Now if you’ll excuse me, I’m going to go warm up inside and knit some more! 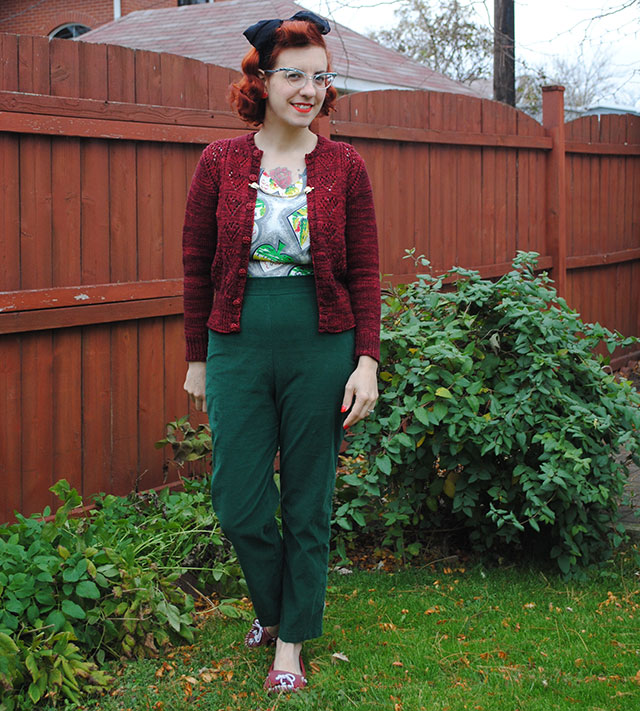