There’s actually two blouses here to show you, but the same pattern and one saga.

Way back in August (how does it feel like both a minute ago and last year?) I really, really, REALLY wanted to sew this vintage Butterick pattern, 6965. 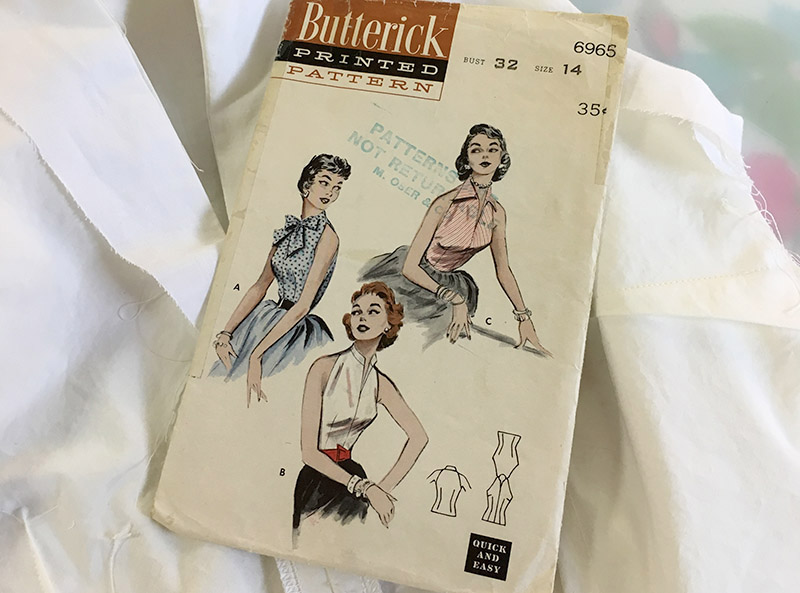 So cute, right? It’s a basic blouse with a chic shape. Looks like a halter neck, but actually has a full back, so you can avoid a strapless and wear it with a racer back bra (or get a little plastic doohickey to temporarily convert your normal bra straps like me). Cute 50s collar in View C, the view I wanted to make. Simple shape. Easy, right? HAHAHAHAHAHAHA no.

I did a muslin, and made my usual adjustment of shortening the torso and lowering the bust darts. And at first glance the muslin seemed fine! Certainly good enough for me to launch into my fabric, which was an off white shirting that you won’t ever see because it only became 3/4 of a finished shirt. I had three separate issues going on at the same time:

I’ll spare you all the details, but eventually the white version became muslin 2 of about 5… I lost count somewhere along the way. In there I also at some point decided I’d try an all-in armhole and neckline facing, since it needed a facing for the collar anyway. And I used a cute gingham. And… all the seams and the facing showed through horribly and I was livid. And it was somehow a bit too tight. That version didn’t get finished, either. All throughout, I was documenting on my Instagram stories and periodically shoving it in a corner for a day or so while I was mad at it. I was at this same ol’ blouse for a couple of weeks at least I think.

Eventually, between two failed supposed-to-be “real” versions and my actually-muslins, I worked out what was wrong with the fit. I tried FBAs and taking wedges out and rotating darts out here and there… it turns out the only actual thing that I needed to do was take a large wedge off the side seam (from the armhole tapering down to nothing about 4″ down) on the back piece only, and a tiny wedge off the very top of the shoulder seam of the back too. Between my usual waist shortening adjustment and my usual bust lowering adjustment, that was all I needed to get a good fit and perfectly smooth armholes. SUCCESS, finally!

The first successful real version was in black and white gingham, a poly cotton blend from fabric.com that was thankfully slightly less sheer than the blue and white failed version. Success! And no gaping armholes to be found. 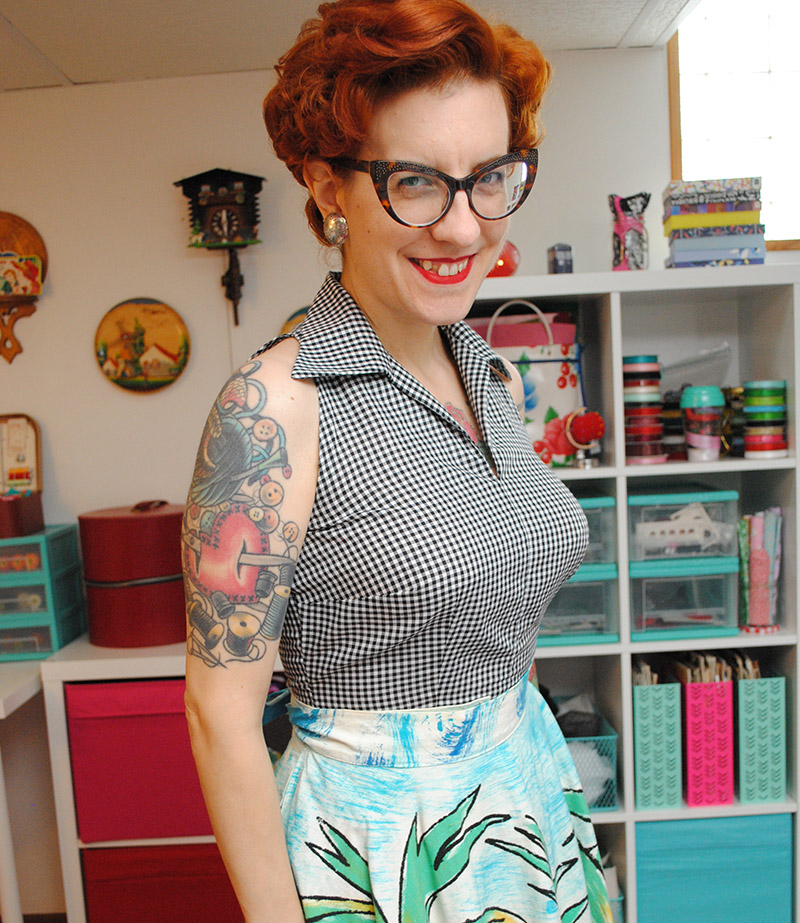 (Promise the back is smooth but things always get lumpy when you tuck them in.) 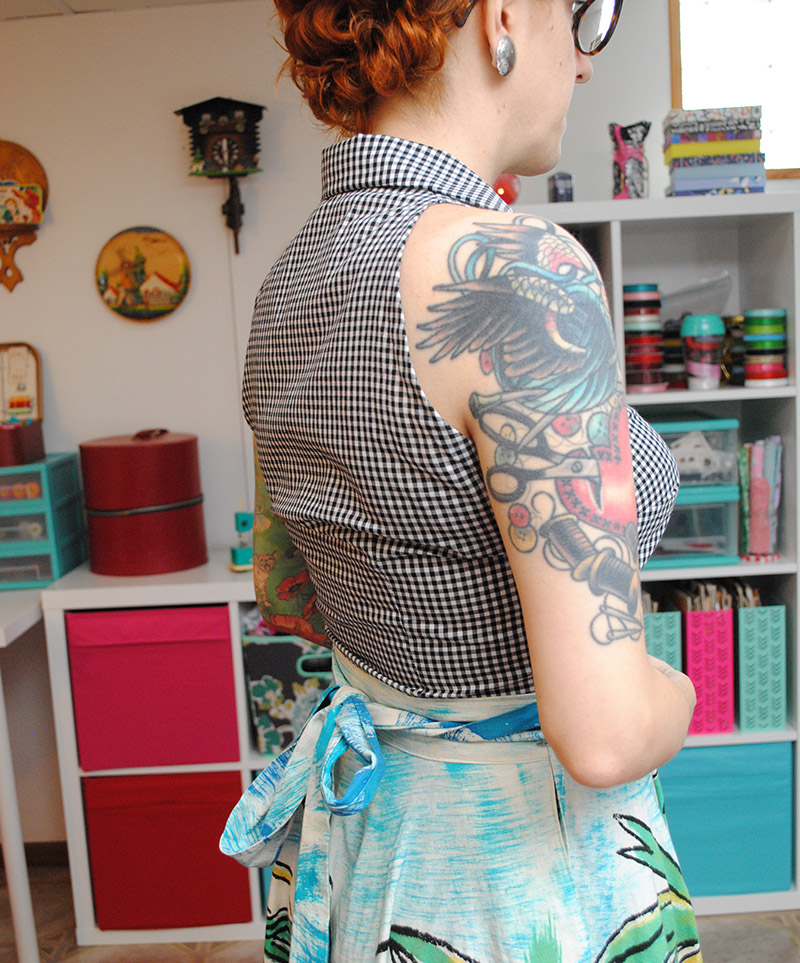 As it turned out, I made one more minor pattern adjustment after this version, which was to raise the bust dart a smidge. When you convert your bra straps to racer back they hike everything upwards a bit more than normal, so the dart was no longer in the right spot and made things below it a bit baggy. But not offensive and I’ve already worn this top loads! 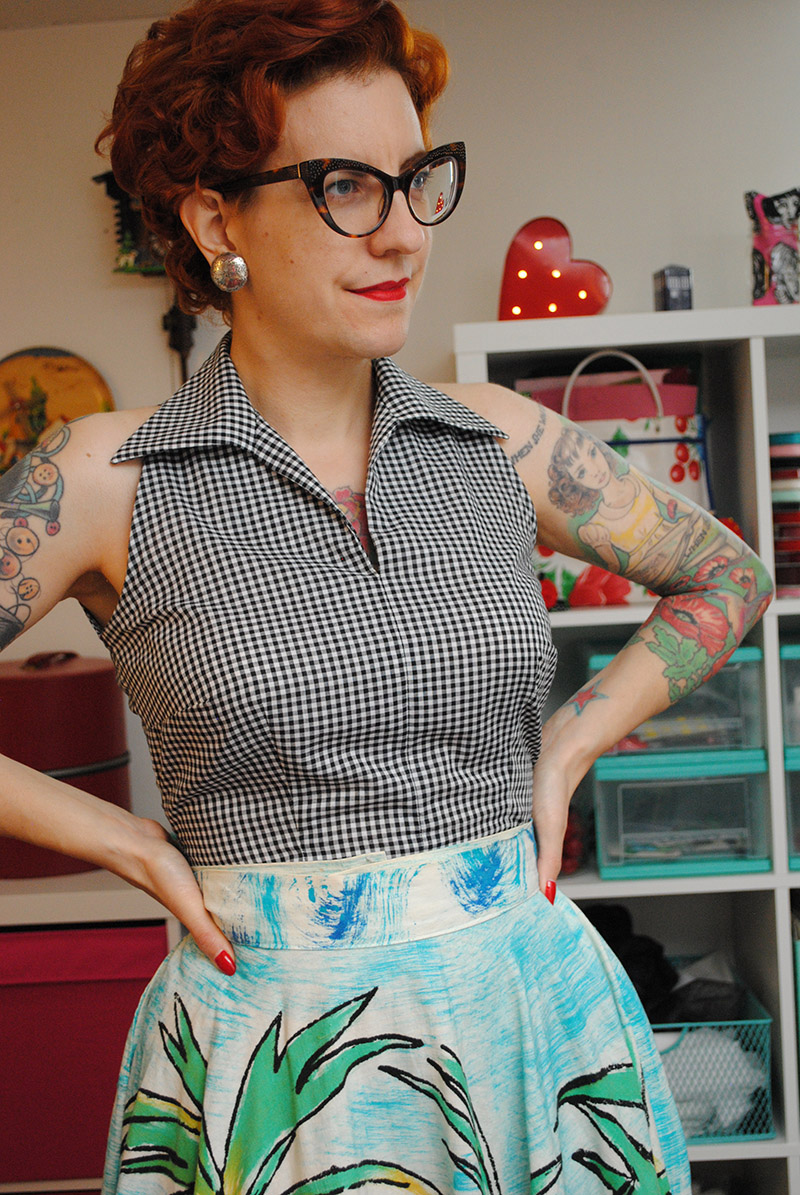 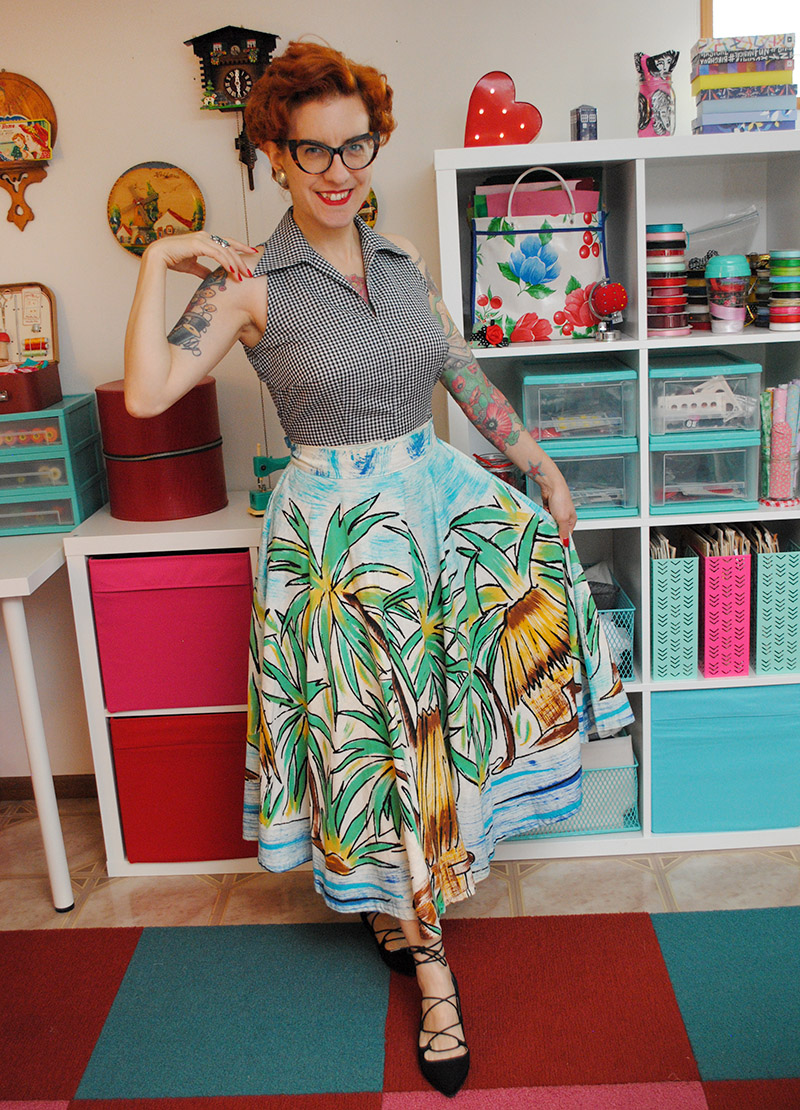 Here was another outfit I liked it with, worn with my red trousers. One of the reasons I really wanted to nail this top is I knew it would go nicely with pants or skirts and I was right! 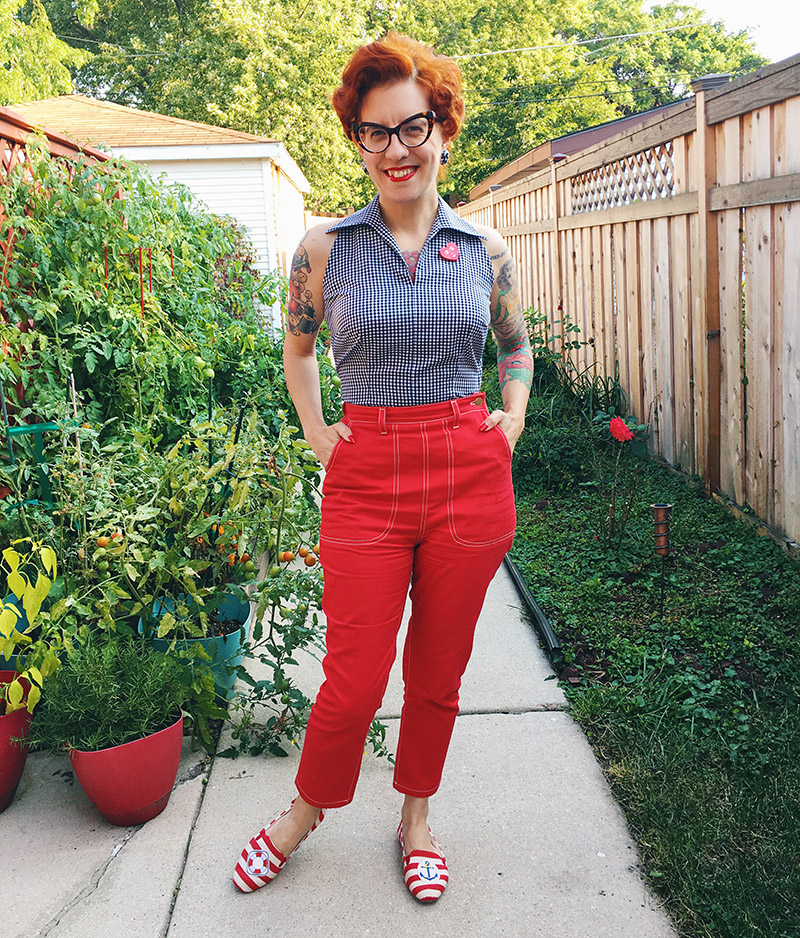 The second version was made with a somewhat sheer black Swiss dot from Mood Fabrics. It’s a gorgeous true basic! 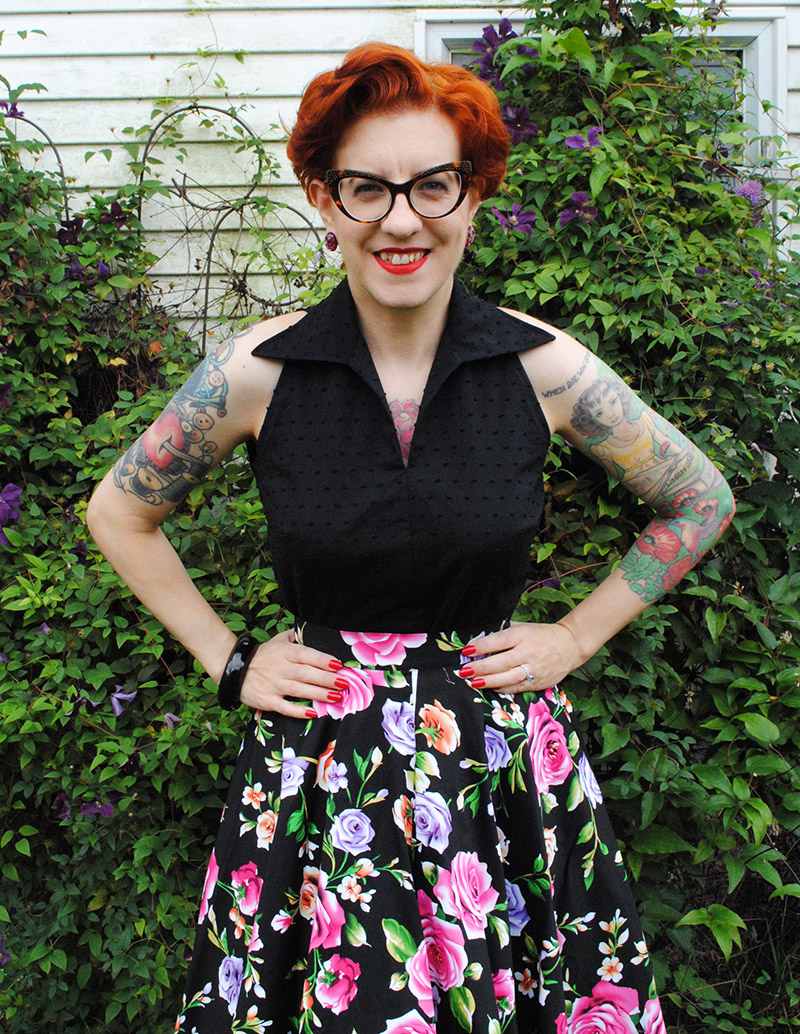 After the first failed blue gingham version, I was really gunshy about that center front seam and the facing showing, which it would have done with the Swiss dot since it was so sheer. So I underlined it with a black cotton lawn from my stash. I always worry with underlining that everything will get all monkeyed up and ridiculous looking after the wash, but I’ve washed this top and no worries whatsoever. Phew.

I underlined this by hand. I don’t usually underline by machine until the fabrics are kind of sticky and won’t slip around at all (like underlining wool with flannel in my Cascade duffle coat). Here’s the pieces with the darts in, and you can see the yellow hand stitching to keep the fabrics together until they’re permanently sewn together in the seams. 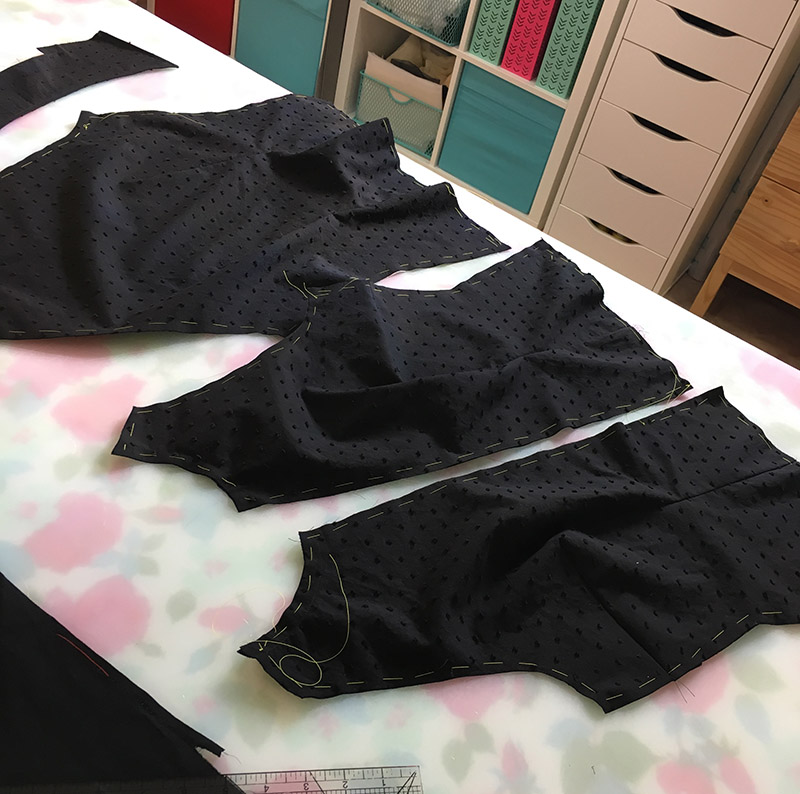 I love how it turned out in the end, and the fit around the shoulder and armhole is great! 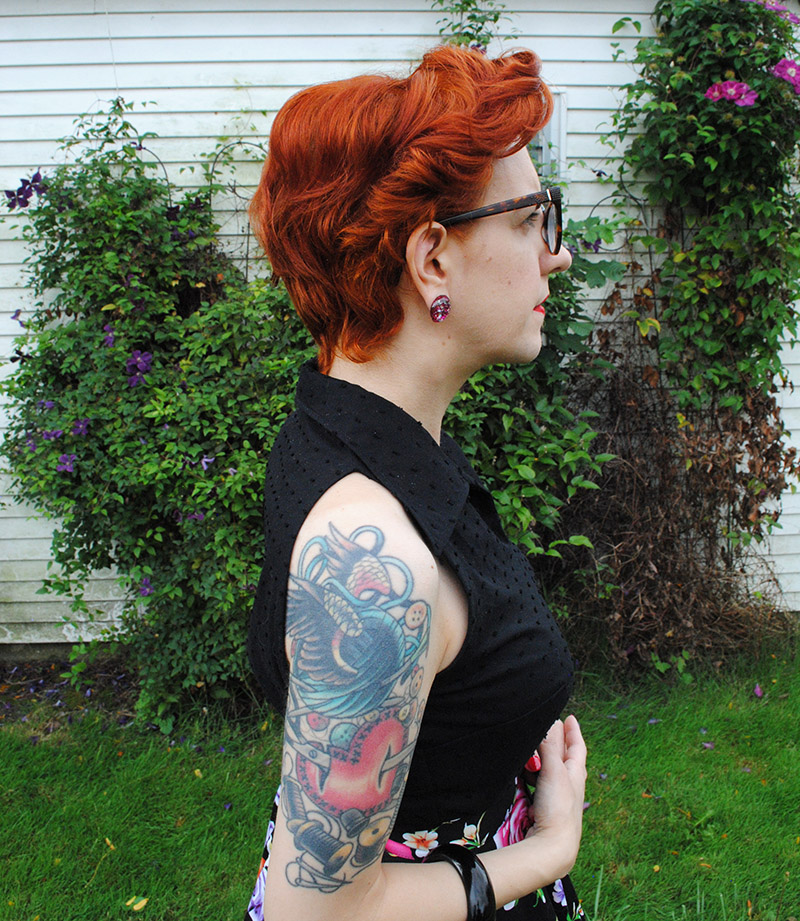 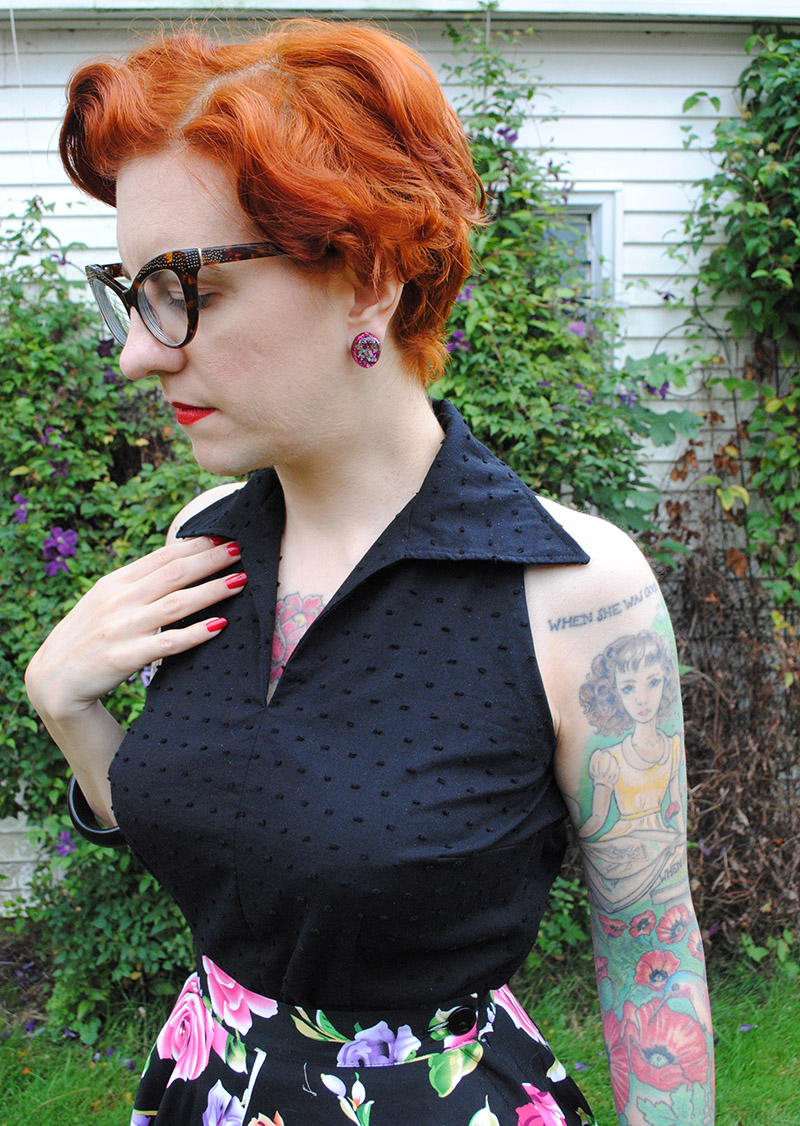 I’m forgetting one important triumph in this post, other than the obvious perseverance through umpteen versions to nail this thing. I conquered my bias tape armhole issue!

Somewhere, I finally encountered the tip that I’ve been missing all these years, even though it seems really obvious once I thought about it! When you’re lining up the bias tape with the armhole, when you’re in the curved section towards the bottom of the armhole, ease it in pretty dramatically to the armhole of the bodice. That is to say, use more bias tape compared to the armhole curve on the bodice. Use a lot of pins if you need to. If you don’t do that, when you flip the bias tape to the inside to sew it down, there’s not enough tape at the outer edge to go around the armhole curve, and you get wrinkling or buckling or other funky stuff with the tape. And that’s what I’d always experienced in the past. So ease that tape in good, and there will be enough to gently curve around the actual shape of the armhole in the fabric. And that’s it. 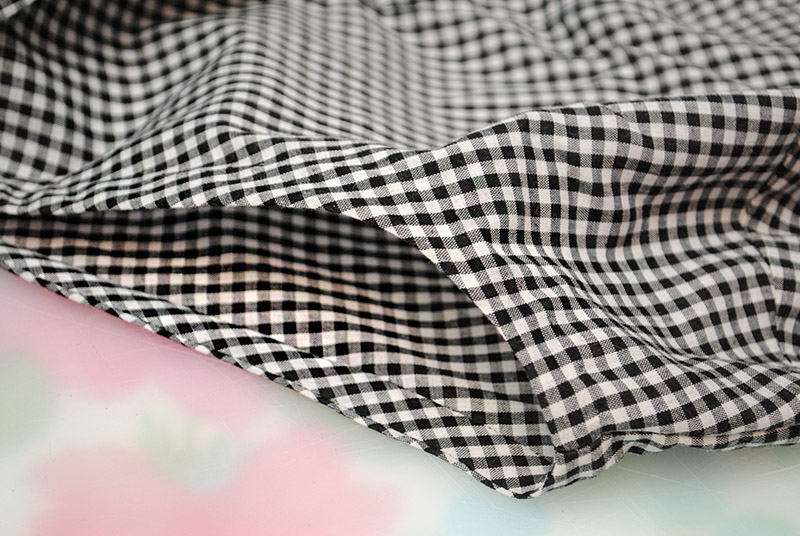 I appreciate learning new things with sewing even when they’re things I should already have known in the first place! So both of these have bias tape facing the armholes, hand stitched closed, and it looks smooth as could be. I’m thrilled. 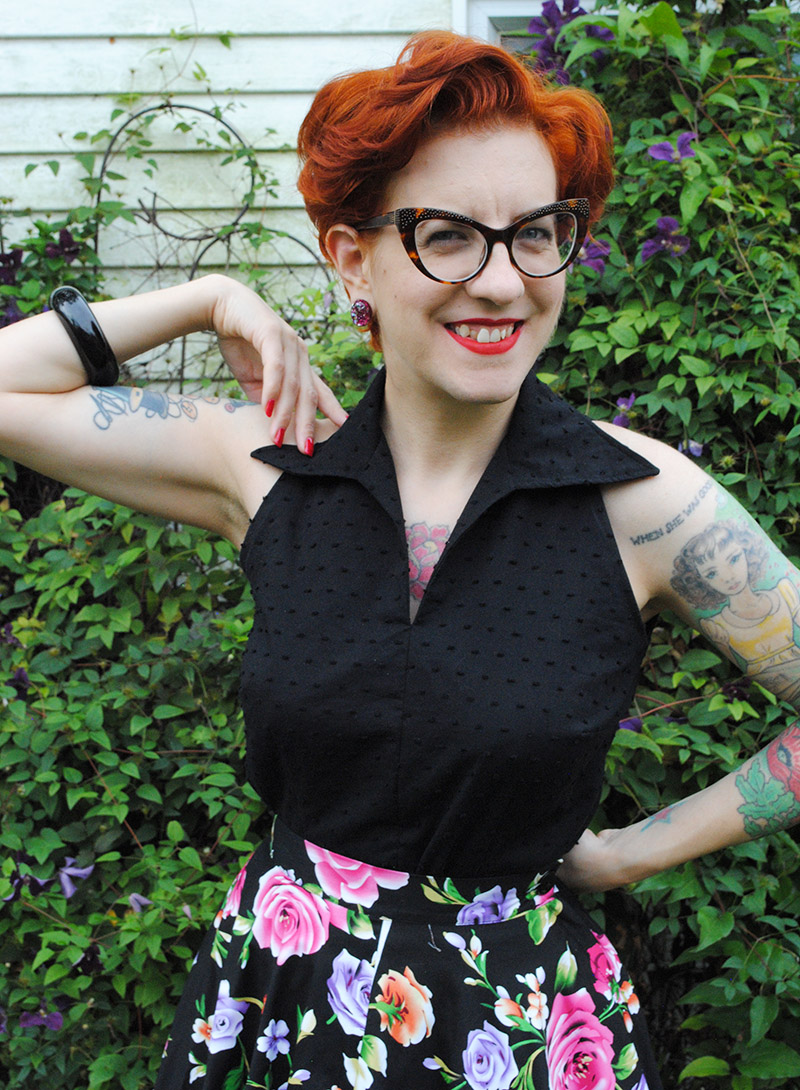 These are two simple tops, but I’m so happy about them for so many reasons. In part because I went through soo much to get the fit right, and in part because I really really wanted a plain blouse top shaped like this! My wardrobe is seriously lacking in summer tops that aren’t just peasant blouses or plaid button ups, and I knew this would fill in a great gap. I can’t wait to make more next summer!! 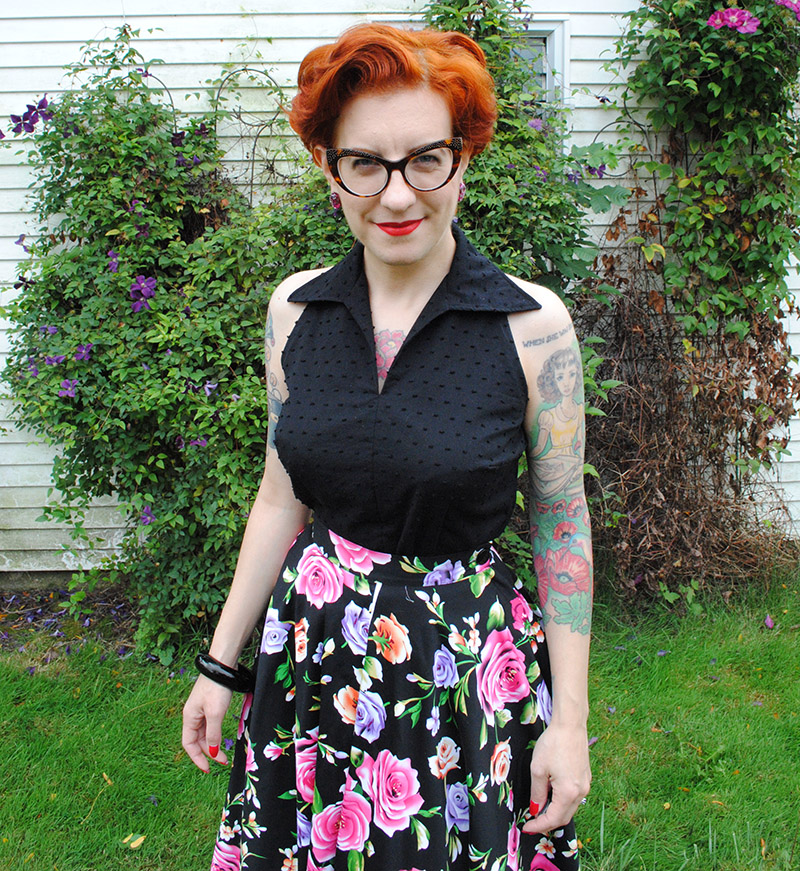 The black fabric in this post was provided by Mood Fabrics in exchange for my participation in the Mood Sewing Network.