Before I forget completely, I want to revisit an outfit I showed you last month, because it had two things I made and I only talked about one of them. You may have noticed a cool blouse I was wearing with my 1950s pedal pushers. It’s my first patio blouse! Knock another item off my summer inspiration list! 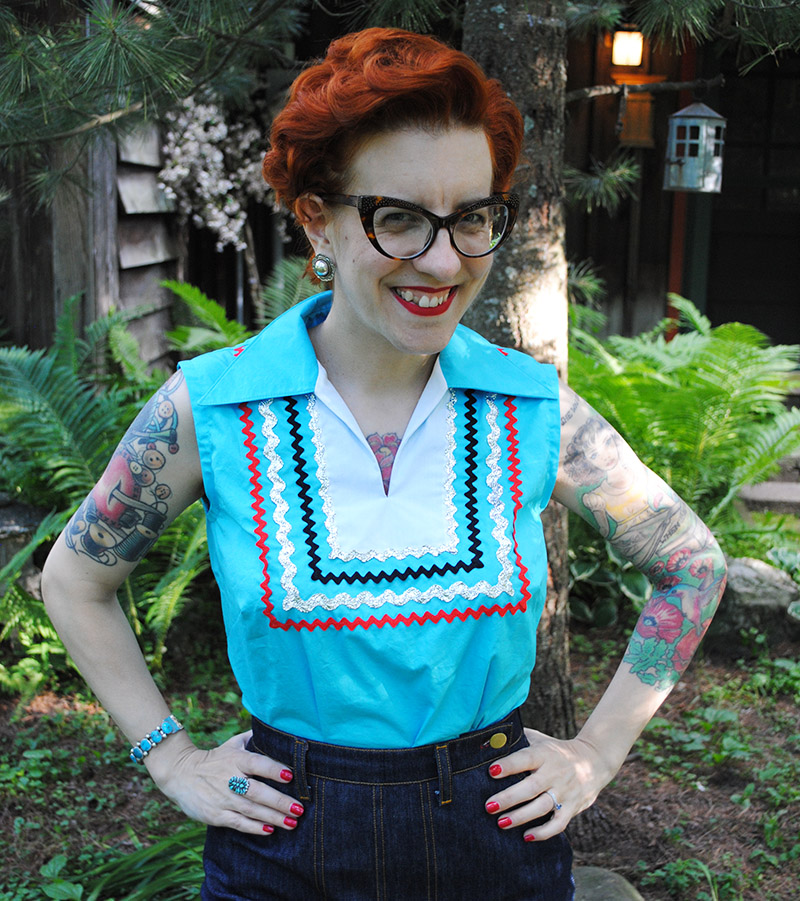 I used McCall’s 9925, the pattern on the left below. So this is another Vintage Pledge item, too! I debated for awhile between the blouses in both of those patterns and finally settled for the one with the contrast yoke and trim, and just decided to flip flop the colors. 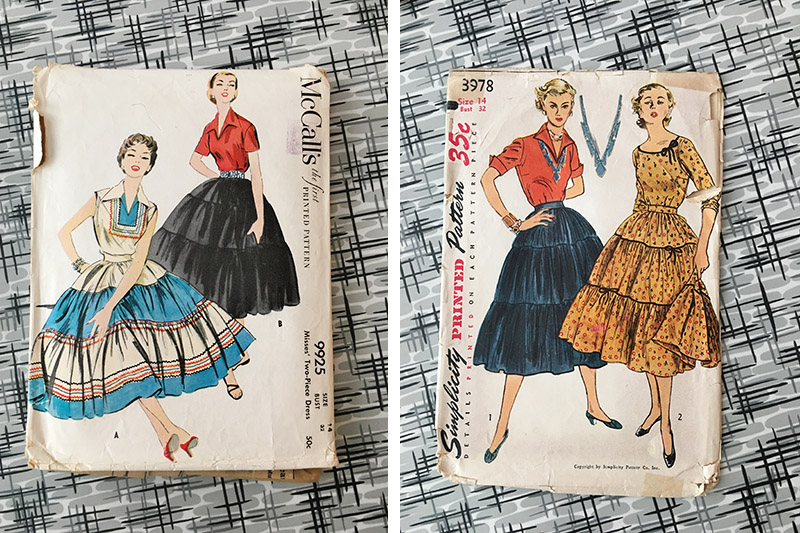 I did a muslin, and I’m really glad I did for two reasons. First, I knew I wanted to remove the center back buttons and change it to a side zipper, because… I just seriously dislike blouses that button up the back. And yes, I know the trick to getting into them unassisted, but I still don’t like them. All that time for facings and buttonholes and sewing on buttons and I don’t even get to look at my own work.

Making that change meant the neck construction was really tight, and I was glad to be forewarned about that with my muslin. Never mind the fact that I coincidentally learned a way to make it a lot easier in the very next pattern I muslined up, a vintage Hawaiian pake muu dress, but at least I know for next time.

Hint: instead of the monkey business you see below where the collar and facings are all in a tight little hole, you just slice the neckline and the facing before you attach the collar and facing. Duh. It opens it all up and is so much easier to sew than the way I did it. Lesson learned. 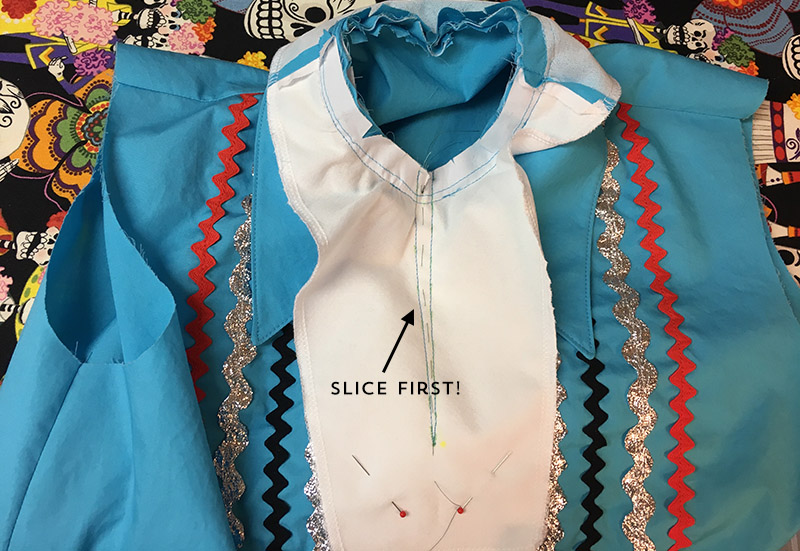 The second reason I’m happy I did a muslin is that I discovered I could actually pull the blouse over my head with no closure. Huzzah! It has a nice amount of ease, but not too much. 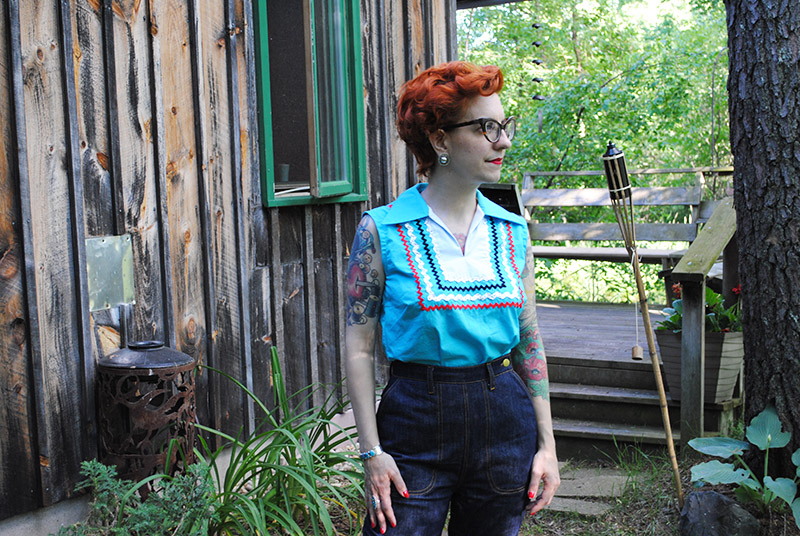 One of the fun parts was planning the rick rack! I had a general idea that I wanted to follow the pattern envelope colors (since red + aqua or turquoise = my colors), but I played with it a bit. Even after I attached the contrast yoke. 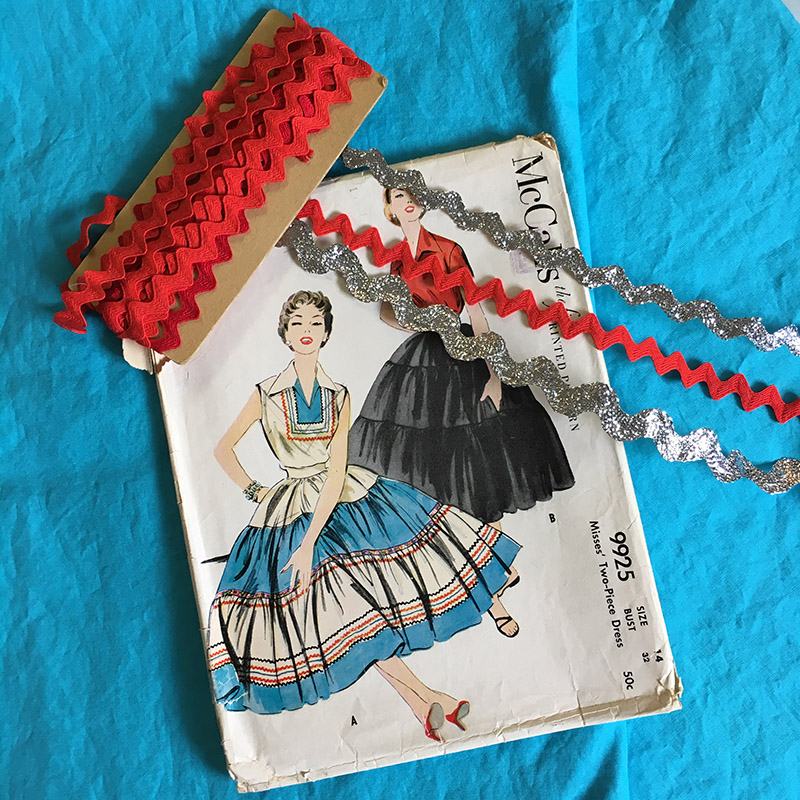 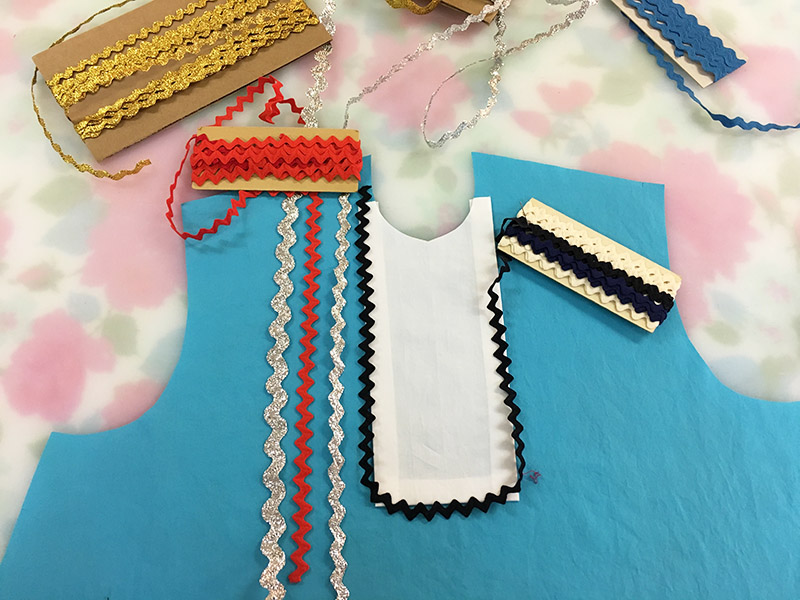 Sewing the yoke and the trim required some serious precision. The way I went about it was pretty easy, and just too a bit of time, but the result was worth it. First, I used a temporary spray adhesive to attach the yoke to the front bodice. (Incidentally, I made a couple of minor changes to the yoke shape which I wouldn’t repeat… it shouldn’t go all the way up to the top as you see below, because it makes it bulky in the collar seam. Not a big deal but a minor annoyance when trying to press everything into shape in the end when I had rick rack in the way.)

I have 505 spray adhesive which I learned about for lingerie sewing, but it’s great for places where you don’t feel like hand basting or really want to make sure something doesn’t shift! It stays tacky temporarily and washes out. I don’t have a photo but after spray basting the yoke, I edge stitched it to the bodice. 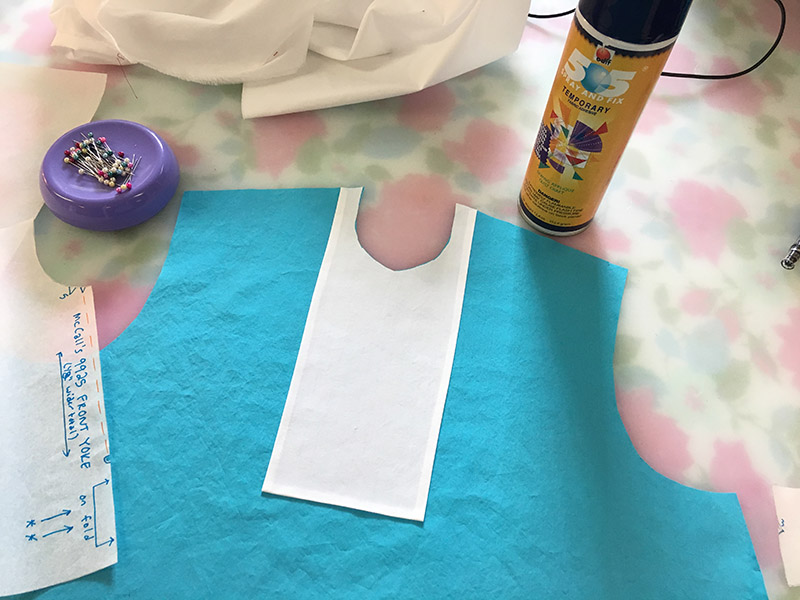 Then I used a fabric glue stick (more adhesive, yes) to attach the first line of rick rack precisely over the edge of the yoke, so it hid the yoke edgestitching. Again I could have pin or hand basted, but I really wanted it as precise as I could get it, and the glue stick was perfect for that. Plus that silver rick rack is some weird mylar or something and wouldn’t have pinned well, anyway. Then I just slowly sewed straight down the center of the rick rack to attach it. 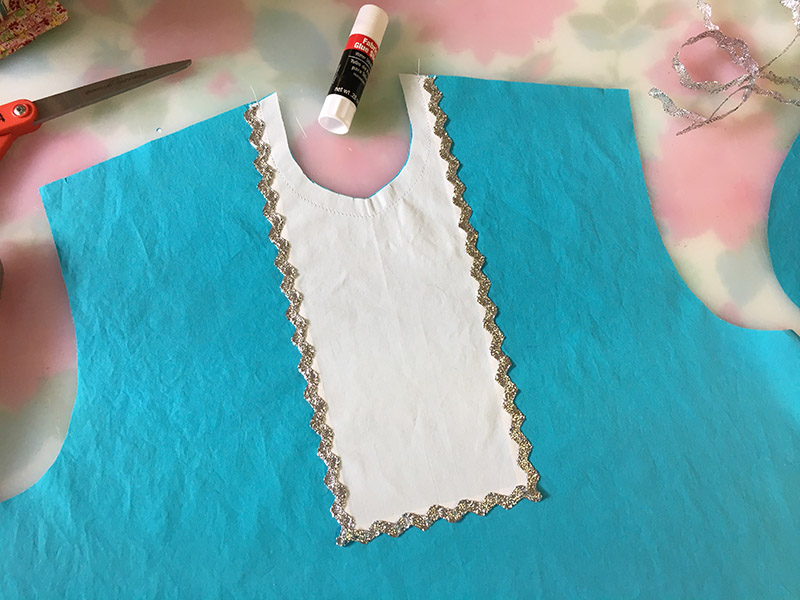 Then I just carried on with glue basting the trim for the other lines until I was finished! The silver rick rack was new, and the red and black were vintage ones from my stash. I have to say it was a lot of work to put into a project before hardly any of the construction sewing got started, but sometimes that’s just how it goes. 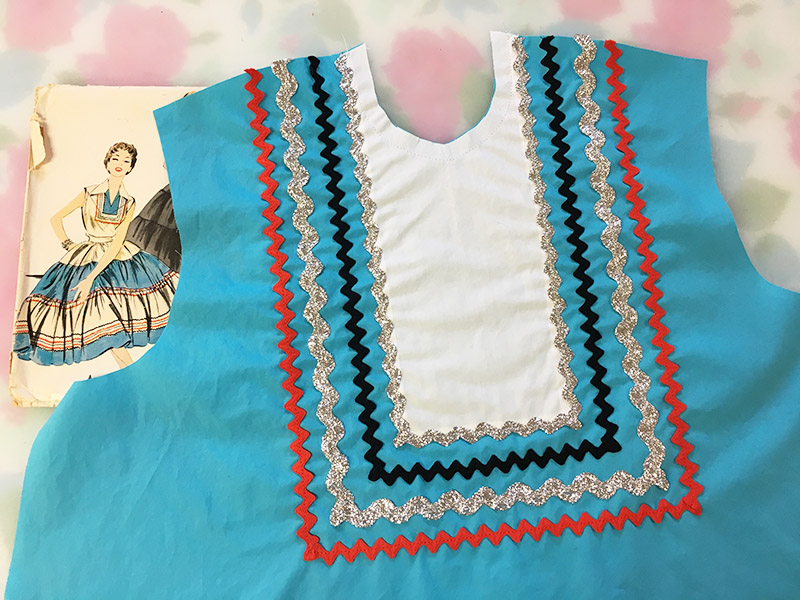 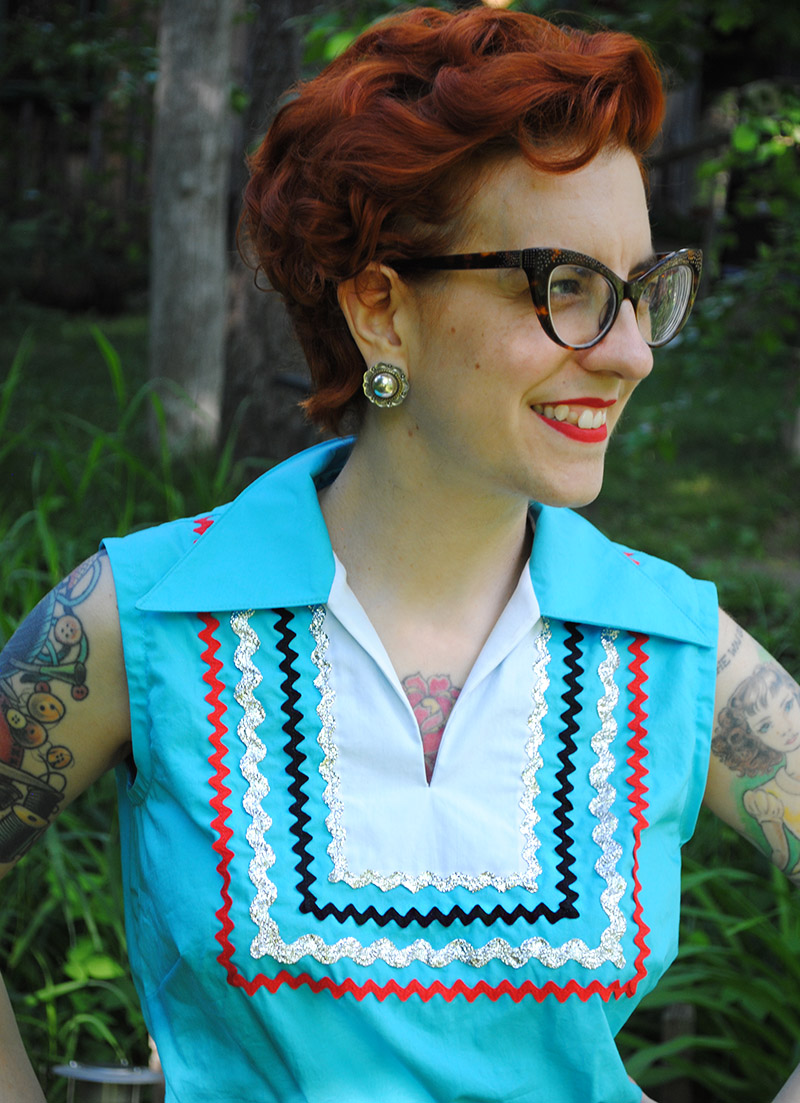 The blouse even looked great with a vintage turquoise ring I antiqued. These photos were taken while we were staying up north in Wisconsin, and we crossed the border into Minnesota a couple of times, and one of the days I found this beautiful petit point turquoise ring. 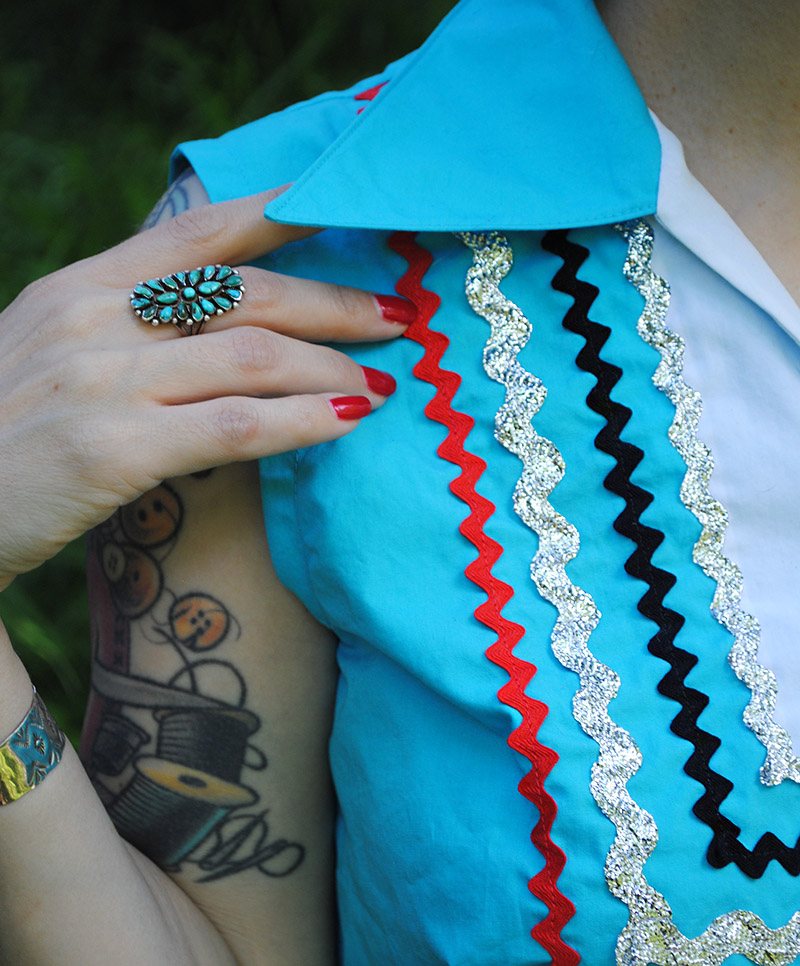 The fabric I used was Robert Kaufman Superluxe Poplin and I’m really happy with it. It’s nice and crisp and lightweight, but still opaque (even the white, which I worried about as the yoke is sandwiched onto the bodice, not inset). Although white fabric plus silver rick rack… not the easiest to photograph. 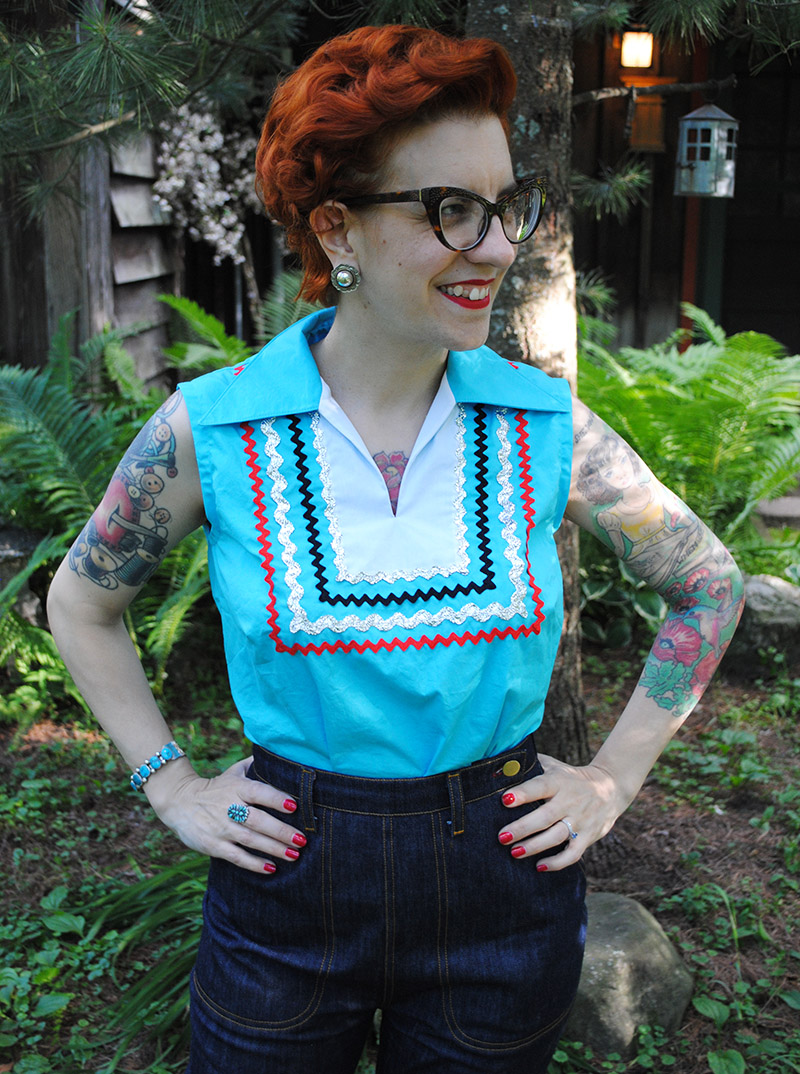 One unexpected thing I like about this blouse is the back neck! Since I removed the button back, I wasn’t really sure how the collar would line up. Turns out it has a nice little scoop from the center back to form the rest of the collar which I quite like. 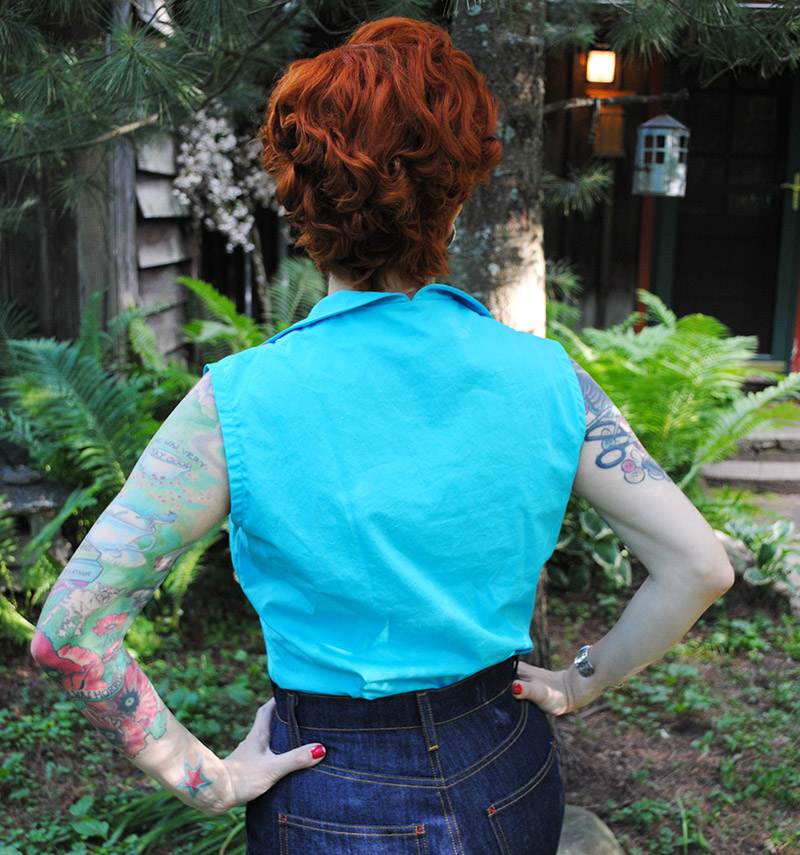 Instead of armhole facings like the pattern called for, I used bias tape. How in the freaking hell do you bind an armhole without it getting wonky on the really curved parts? Ugh. No amount of clipping and trimming in the minute seam allowance you use with bias tape could help. I should have gone with my original instinct which was to give this cut-on sleeves. But sometimes that gets fussy to work out with bust darts and this was one of those times, so I scrapped that plan early on. I feel like a lot of sleeveless blouses with bias tape look like this, but meh. It still annoys me (and was difficult to sew to boot). 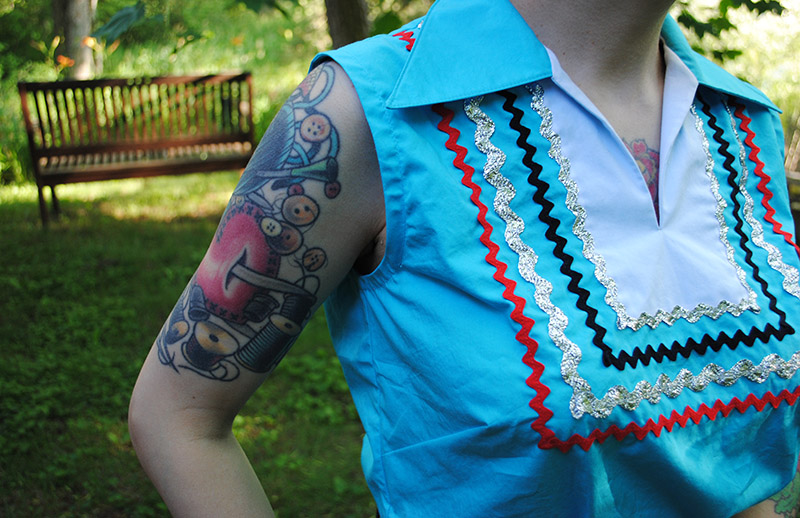 Anyway, very minor quibbles aside, I love this top and I’m glad I finally got around to trying a patio blouse! I also think this pattern would be a great for a plain top to wear with patterned skirts, minus the yoke and trims, or maybe a different orientation of trim and no yoke. It’s nice to have a new vintage blouse pattern in my arsenal! 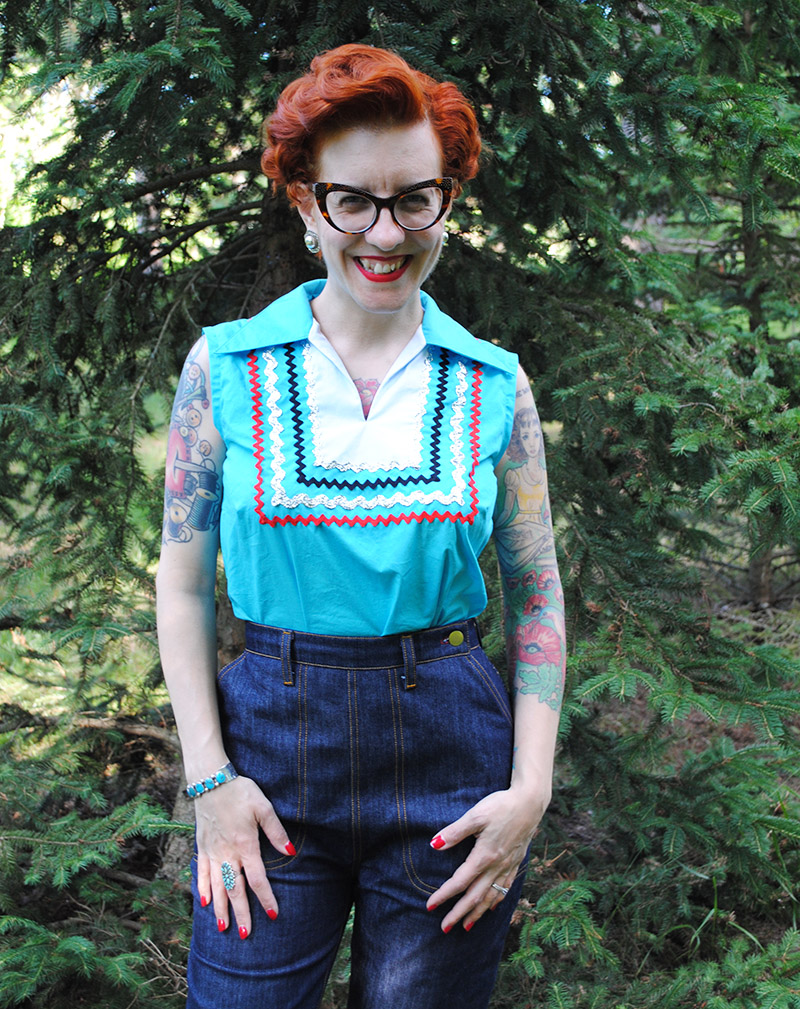