Hey, I made some jeans! 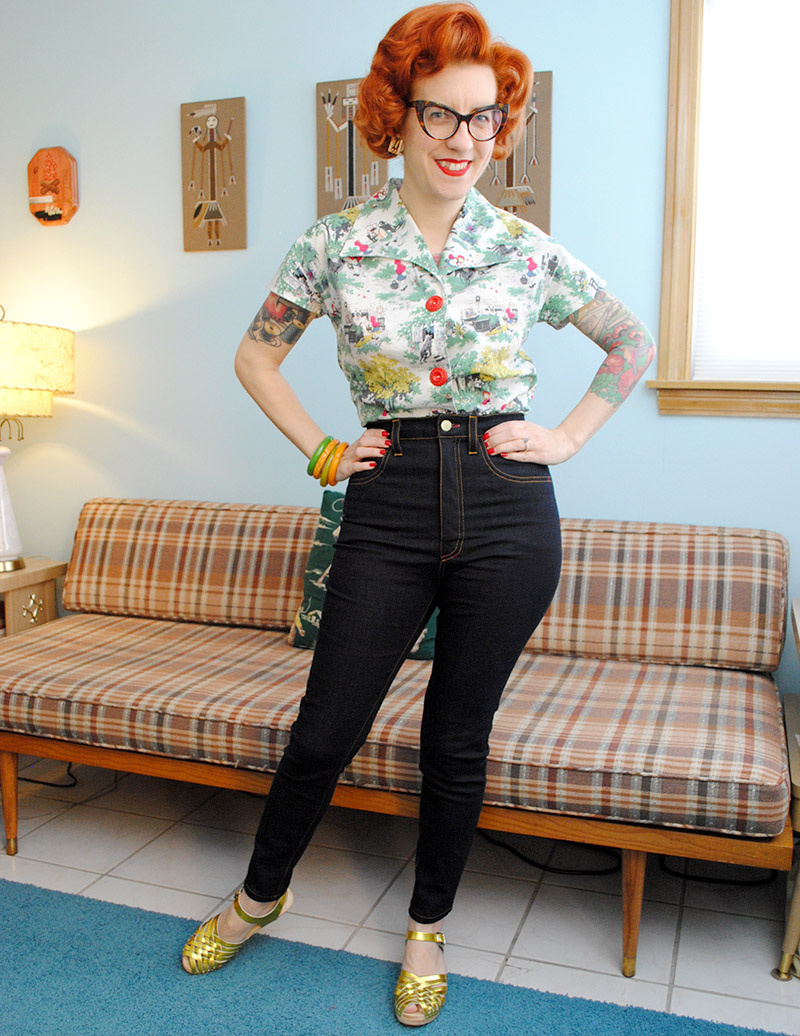 It’s another pair of Ginger jeans, I know, I know. Big whoop. This is my fifth pair now and I’m done for the foreseeable future! I have the very first pair, the second pair that worked on the retro styling and fit and added a cuff, the third slightly relaxed Western pair, a fourth pair I’m going to get to in a sec, and this pair. This fifth pair technically replaces the fourth pair. And I really don’t need to be blogging about more jeans but here I am, oh well.

Here’s the saga: I wanted a pair that were a slim fit but with no cuff. Then I have no need to sew jeans for me for a good long time. So that was the intention of pair four. But two main issues happened with them: the first is that there was a blip in the denim, and because I cut the pieces with the fabric wrong side up, I didn’t notice this. It landed smack dab at the center of my leg at crotch level of the very last leg piece I cut, which meant I didn’t have enough fabric to re-cut! I was so pissed, because it was good Cone Mill denim. (And no don’t even dare talk to me about distressing denim on purpose. Do I look like someone who is going to wear distressed denim?)

I carried on with pair four anyway but I already had a grudge against them, which got worse when I made a mistake that could only be fixed by undoing a significant part of the waistband and upper torso: some minor change I made somehow left me with a weirdly small pocket facing, and the edge of it peeked out of the pocket on one side (yes just one). I didn’t baste the fit on pair four because I was already angry at the fabric issue, so I didn’t discover this until they were finished. And because they’re so fitted, that pocket thing made me livid. I could tuck it back in but it would always pop out. Lessons learned: don’t sew when angry at your fabric, don’t not baste jeans, don’t not do pocket stays instead of pocket bags (if I’d have done that in the first place, I wouldn’t have created myself a problem).

I wore them a few times but couldn’t get over the issues, so I decided a month or two later to sew another pair. Enter Ginger the Fifth! 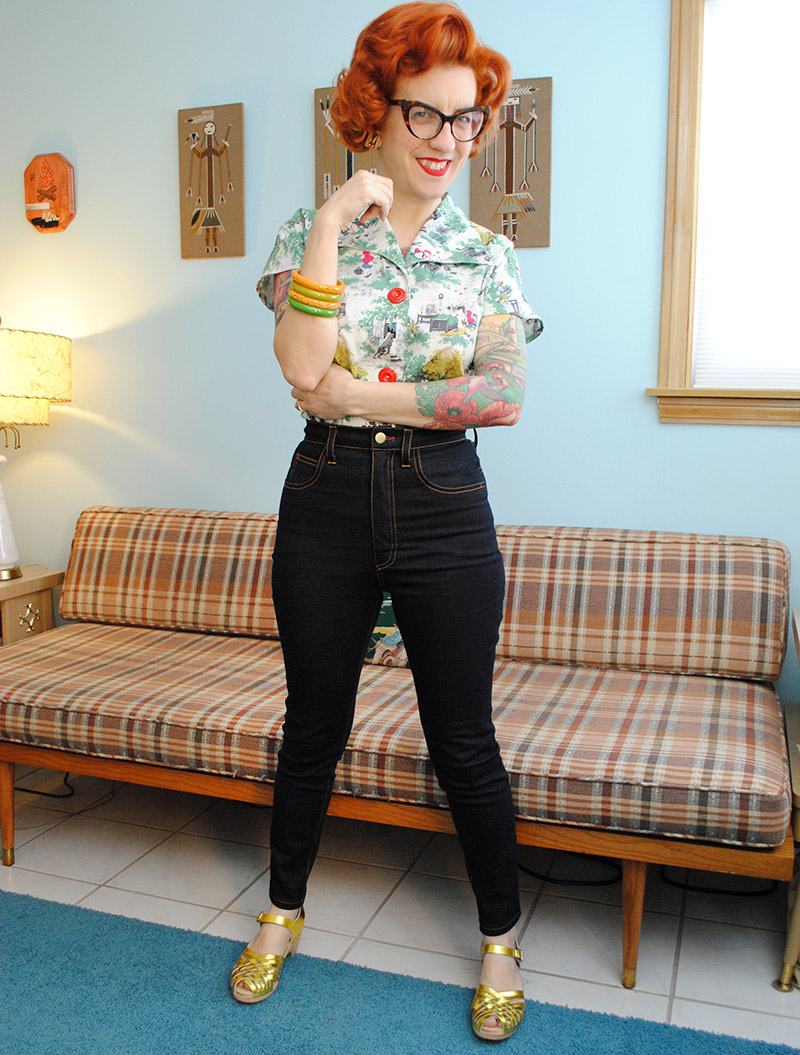 They’re the same concept as pair four you’re not seeing, with a few small tweaks since I had the option to perfect them… as in, making me feel better about starting over. 😉

I went back to using a pocket stay, for one. The only reason I hadn’t done that was that I did the pocket stay on my second pair that I wear a lot and by the end of the day, it’s almost too much sucking-in-ness, so I was trying normal pockets for awhile.  I also raised the waistband back the 1/4″ I’d lowered it on my Western pair and failed pair four because I decided I liked that better, after all. At some point I think I took a wedge out of the center back, which dips the waistband down a hair in the first few times I wear them, but means I don’t get a small pool of fabric back there which is infinitely preferable to me. 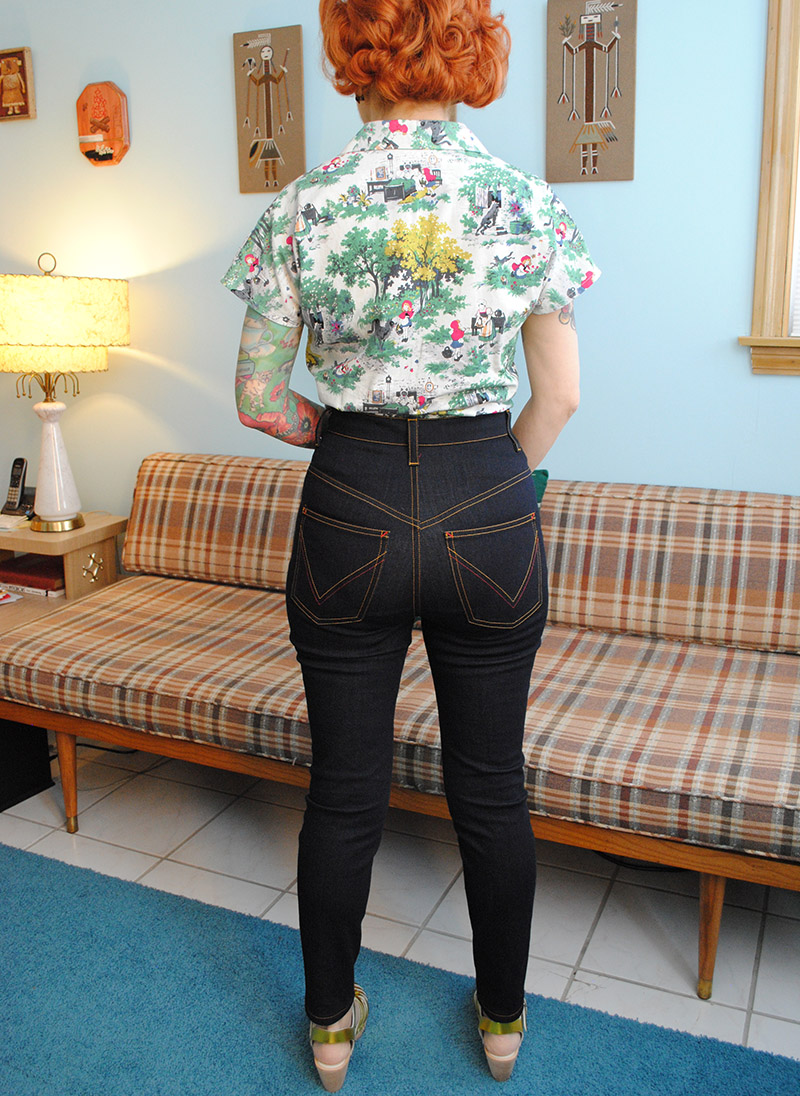 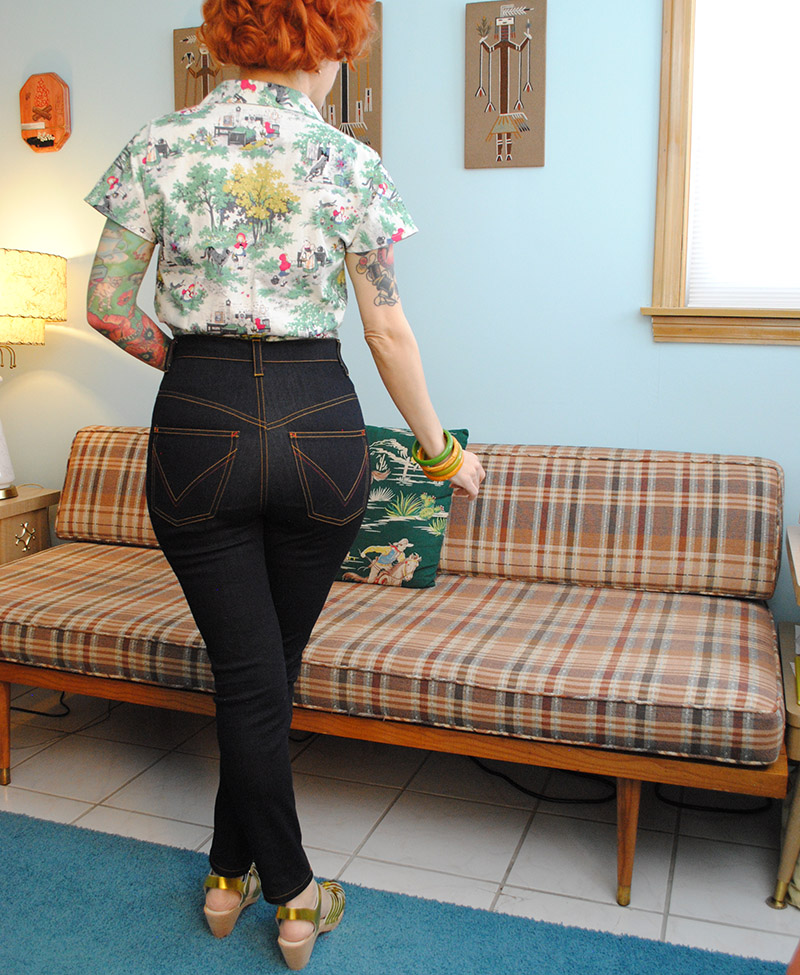 All’s well that ends well. I’m happy with the Ginger the Fifth pair since it matches the vision in my head. They’re a wee bit tighter in the upper hip and butt than I’d necessarily like, but it’s kind of hard to get around that. The waist and legs fit exactly the way I want, and it’s probably the best under-butt I’ve gotten so far in pants. That just leaves a very short length to try and add any width at the seams, over the hip. And I sewed that part at 1/2″ seam allowance after basting the fit. But denim does relax a bit, and I’ve already found them more comfortable a few wears in than I did right off the bat.

So, some fun things about these jeans! One of the things I looove about sewing jeans is the customization. Sometimes I’ve gone for plain back pockets, once I did amped up pockets with hand-sewn arrowhead tacks, and this time I went for some contrast stitching. 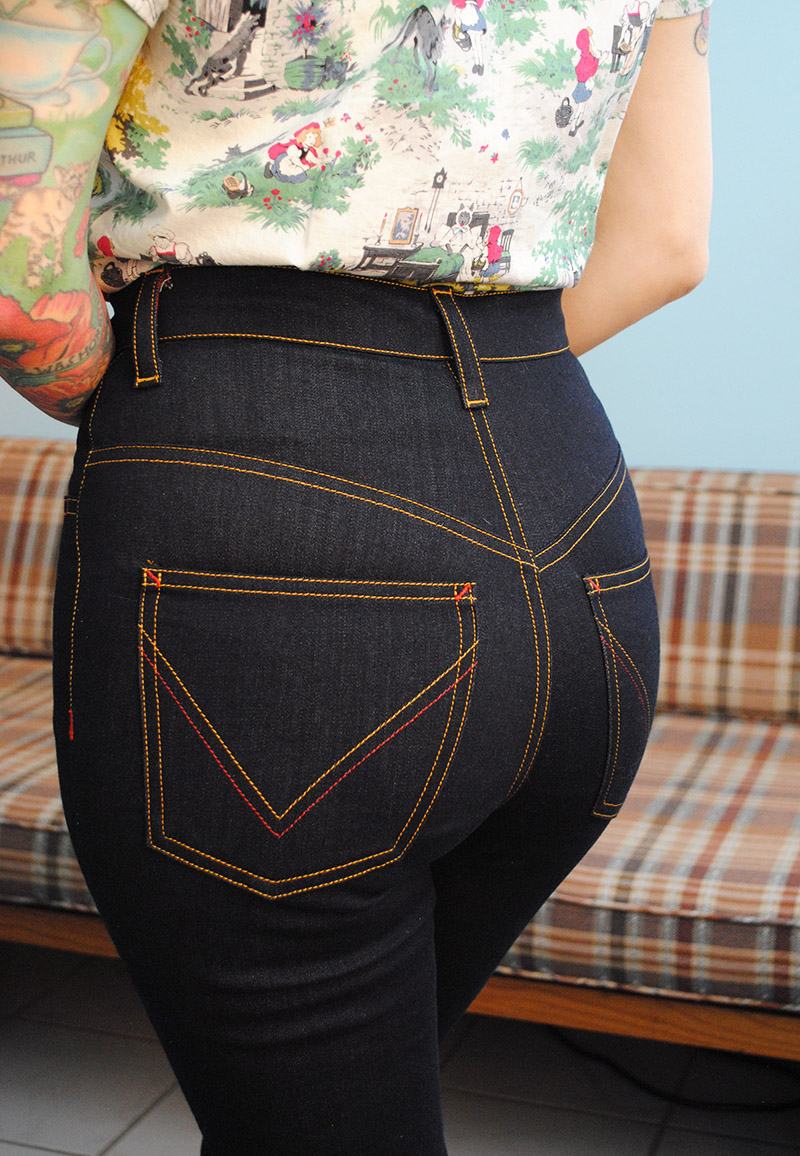 And it’s become a “thing” for me to omit rivets and sew contrasting bar tacks instead in various spots (I even did that on Mel’s jeans), and same with the buttonhole. Failed pair four had them in light blue, these ones in my standby, red. Next time I need jeans zippers I should buy them in red! 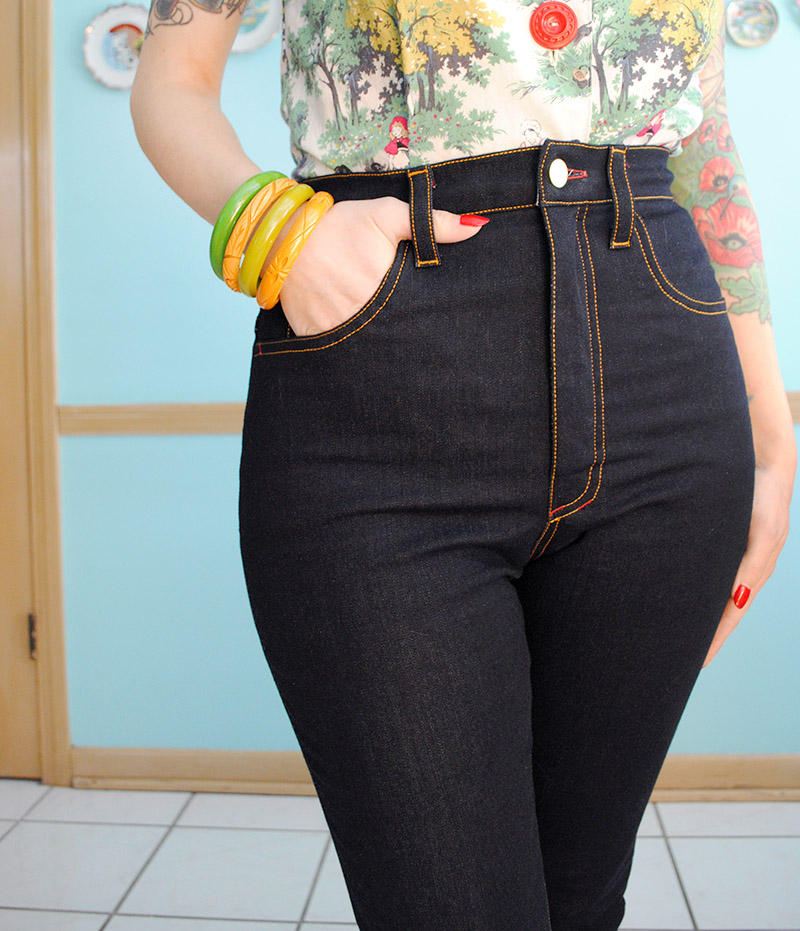 Along the way through sewing many pair of jeans, I’ve learned I get better bar tacks in corners (like the upper edge of the pockets) if I start with the needle in the corner that’s not at the edge, and work towards the edge. Somehow even with something to raise the presser foot to the level of a few layers of folded denim (folded up business card, hump jumper, whatever), the result ends up nicer if I start in the opposite corner. Then no need for that. The only place this doesn’t work is the belt loops since they’re skinny, but for some reason those usually turn out okay anyway. 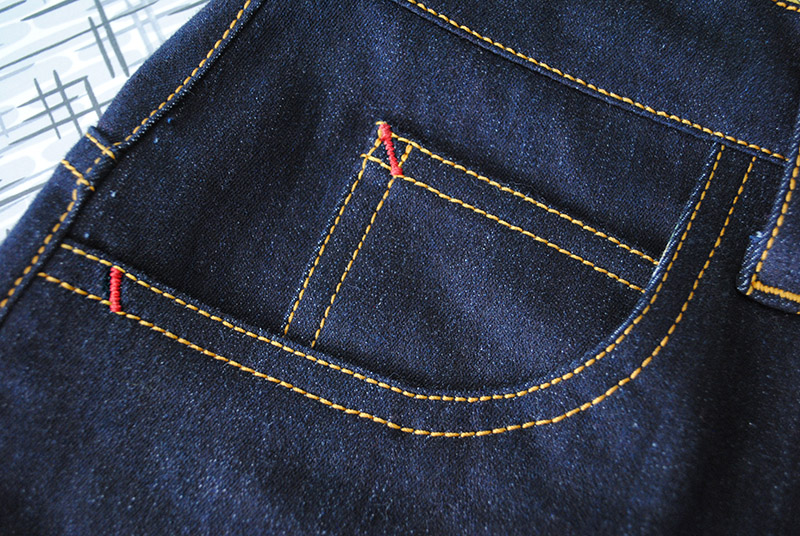 Pocket innards! This is one of my favorite things about this pair. I used a Moda fabric of a London street map for the pocket stays and the waistband facing, as kind of a foreshadowing of our upcoming trip to London (although I’m not sure if the jeans are coming along or not!). 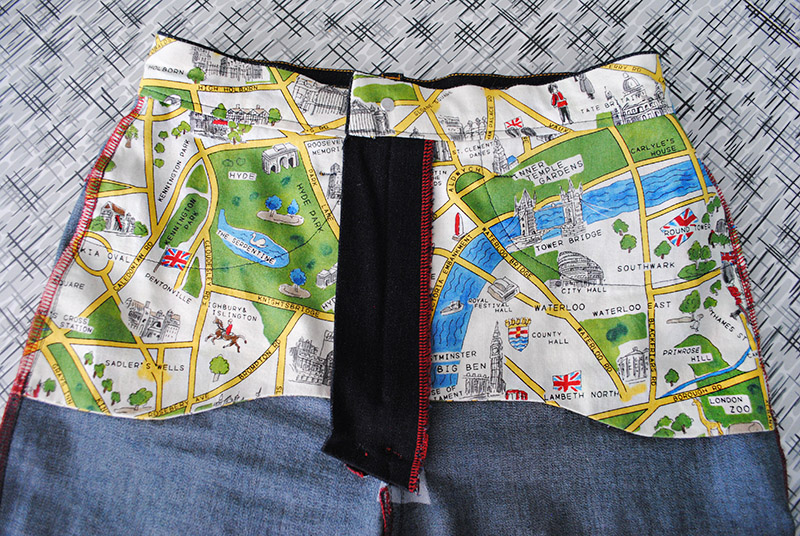 I seriously love this part so much! 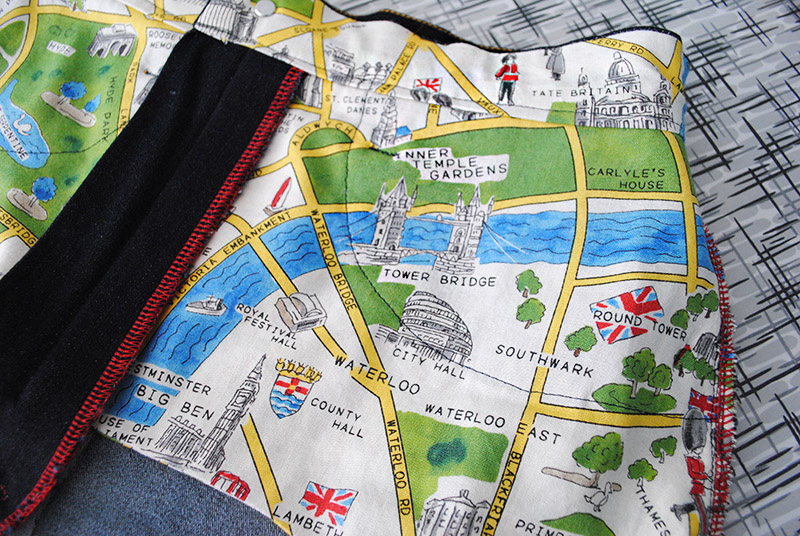 Things I might change in the future… give myself a bit more hip room if I can, probably shorten the yoke and lengthen the back leg (keeping the rise the same but changing where it’s distributed in the back), since I’m always fussing with those proportions…  but honestly, I’m just really glad I don’t have any jeans on tap to sew in the near future. Two attempts later and I finally have my narrow leg, no cuff pair. Huzzah! 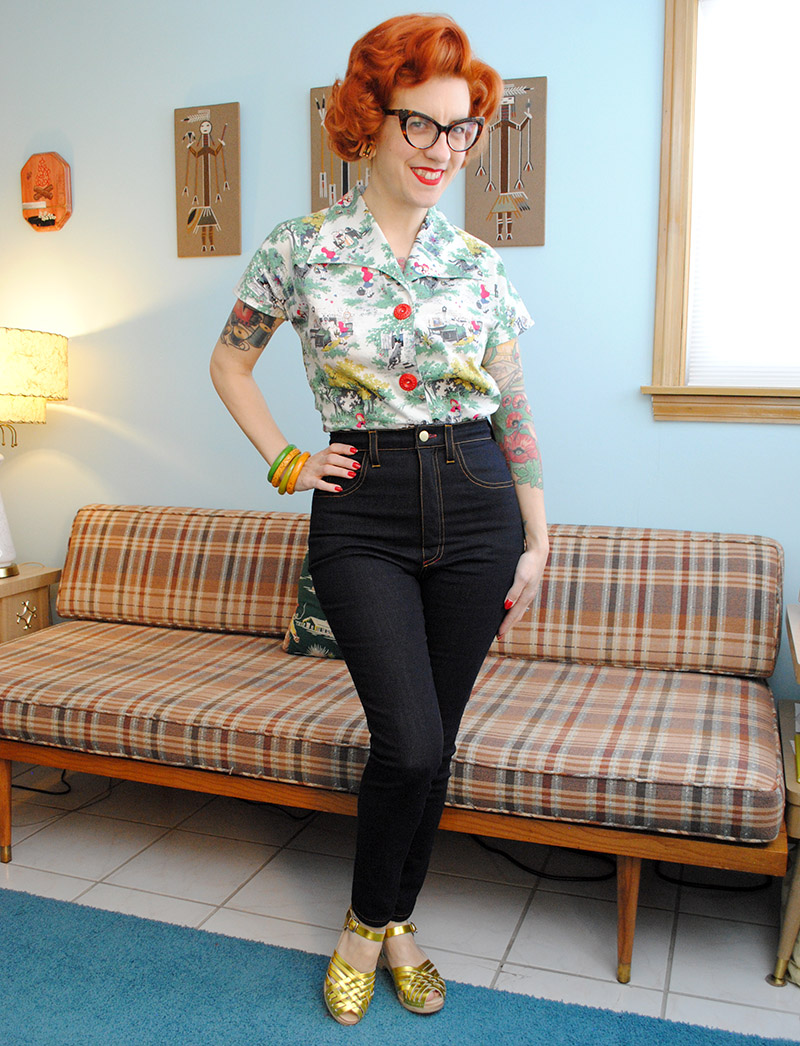