I made something—something big—for my spouse! 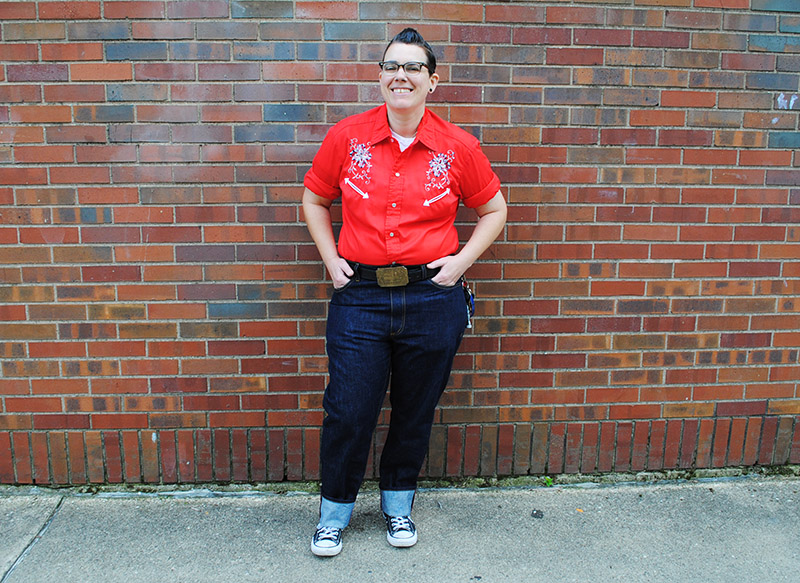 This is the Morgan boyfriend jeans by Closet Case Files. I finally got up the gumption / nerve / desire / whatever you’d like to call it to sew Mel some jeans. And since I’d never actually sewn for Mel before, this was a big place to start. But hey, sometimes I like a good challenge!

I looked at men’s jeans patterns first… all like, 2 or 3 of them that I could find. (I feel for people who sew menswear!) I determined that Morgan was styled basically the same way, but because it was actually a woman’s pattern, it was probably meant for curvier bodies. And so that’s where we started. 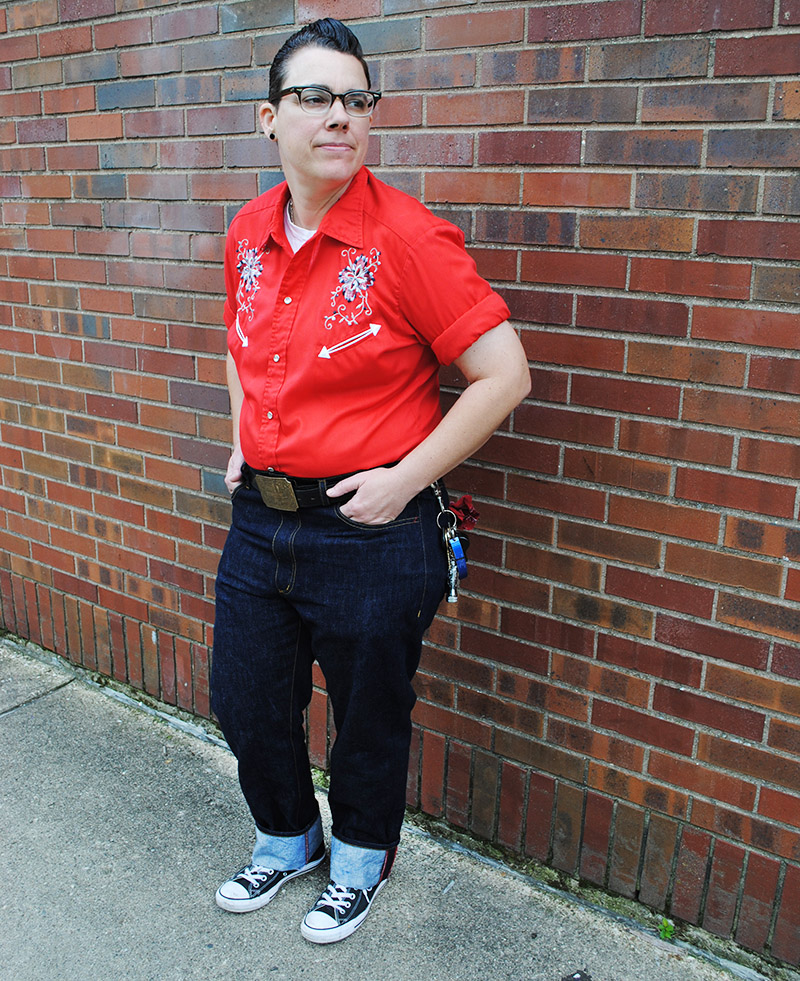 I used 12.5 oz rigid Cone Mill denim from Threadbare Fabrics (which is really dark and thus hard to photograph!). Good grief was this fabric a beast, and damn near stiff as a board when it arrived! I wasn’t going for raw so I pre-washed it twice and dried it, and then had to press the everloving daylights out of it. I mean like full steam, with spray bottle of extra water, go over twice, soul sucking kind of pressing. And it still has a somewhat wrinkled texture. I’m worried I may have to press the jeans when they get washed. Grrrrr.

It wasn’t too much more difficult to sew with using a denim needle, but the stuff was so rigid that the fabric literally cut my finger while sewing on the waistband and maneuvering it all. No kidding! 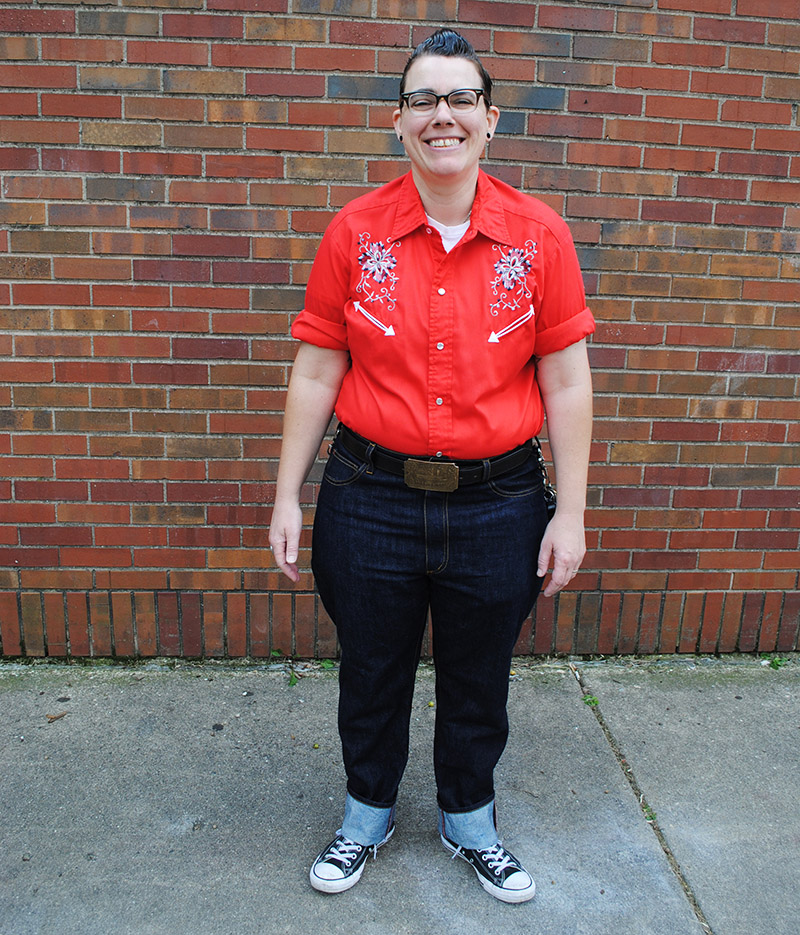 Because this wasn’t stretch denim, and I was sewing for someone else, I did a muslin first. Based on measuring Mel’s favorite jeans, I cut a 16. But I also raised the rise/crotch depth 1″, since we were going for more of a vintage look, and Mel has a long torso (I have a longer inseam, and I’m shorter!). The fit was pretty good except the side seam from the upper thigh to the waistband was wonky, so I added more room in a few spots to make up for that. 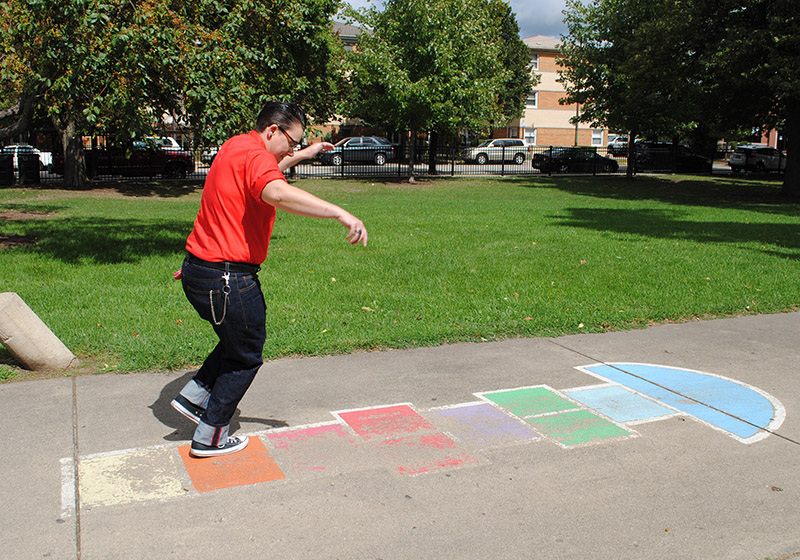 It’s a totally different frame of mind, sewing for another person, and you have to think about where their needs may differ from yours. Mel is relatively hard on clothing, so in key places, I added a bit of extra stitching for strength. I used a French seam for the pocket bags, then secured them with a line of topstitching (a tip I picked up from examining Mel’s RTW jeans). I also secured the pocket facing to the pocket bags on the curved side with two lines of stitching. With pockets that get used a lot (and Mel’s do), I figured you just can’t be too careful!

The inside is an Alexander Henry quilting cotton that Mel picked out, and totally makes these jeans extra special, inside and out! 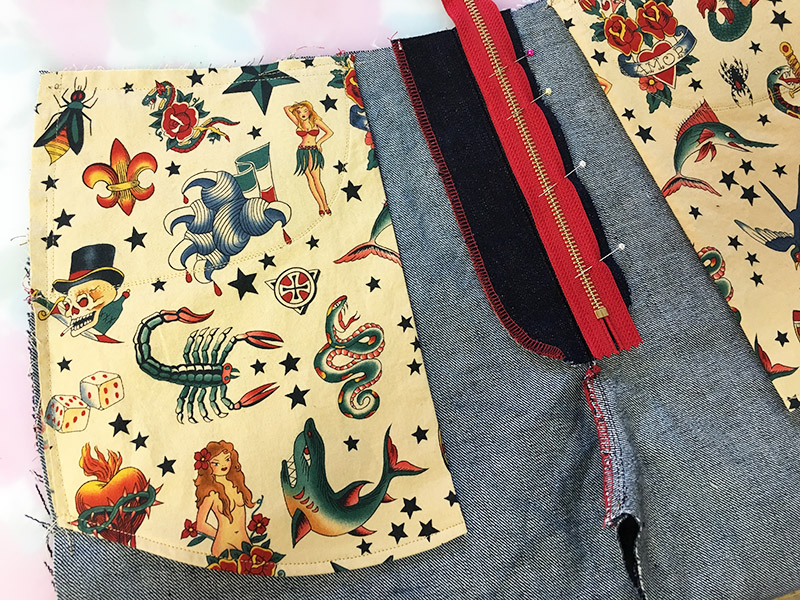 Because the denim was so rigid, I opted to use the same fabric to face the waistband, instead of denim. Less traditional, but more custom! Especially with a red zipper, red serger thread, and red bar tacks on the pockets (which hadn’t been added yet in the photo below). 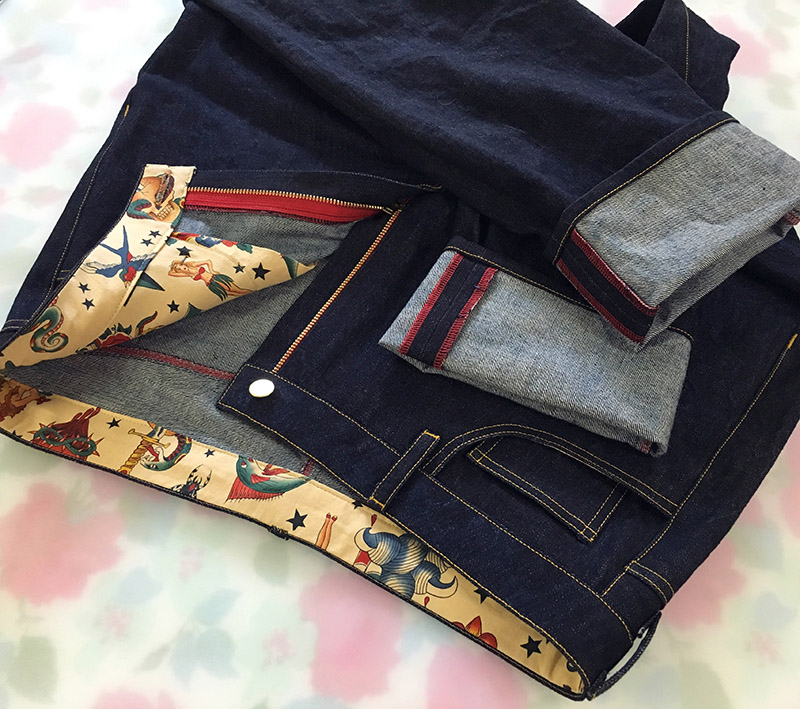 But you can see the bar tacks here. They’re a fun touch, and installing rivets gets me twitchy anyway (especially when I was only averaging 50% luck with samples). I’ve done this now a few times and really like it. 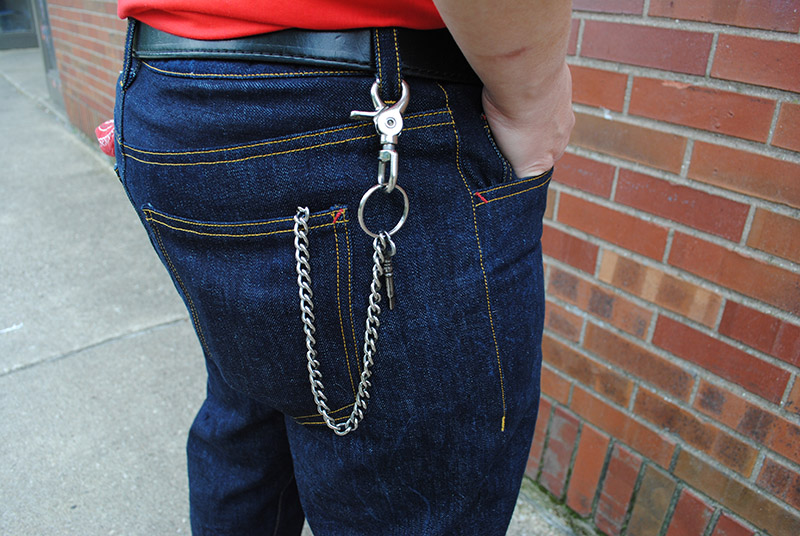 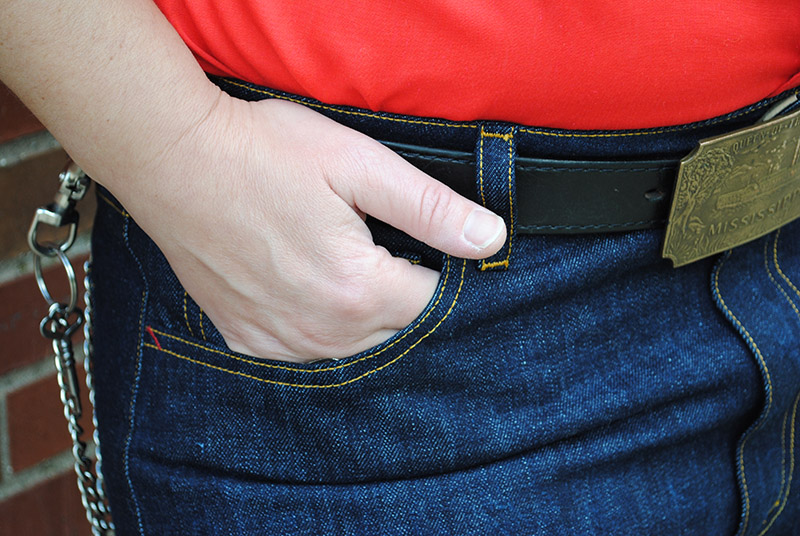 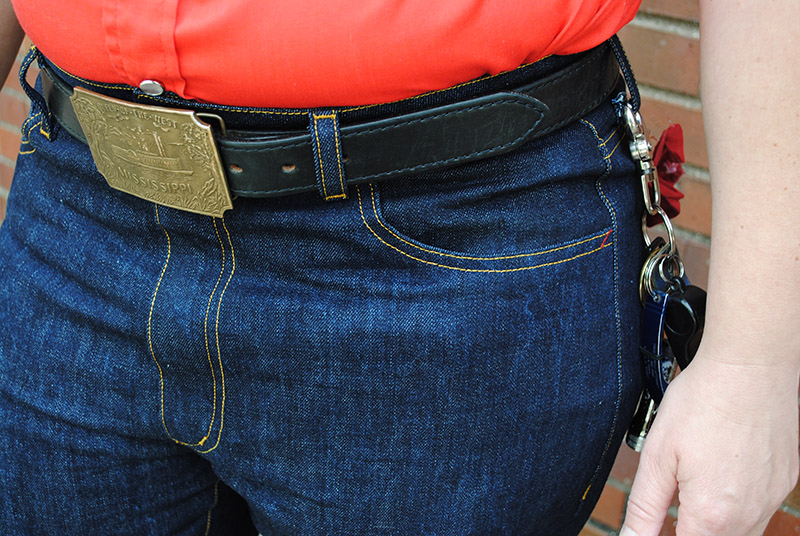 To turn a boyfriend jean pattern into basically a men’s jean pattern for a curvy body, I made the following style adjustments:

And for Mel, I made the following fitting adjustments after doing a muslin:

If I ever sew Mel another pair of jeans, I think I might lower the rise a bit. The higher rise is great, but Mel doesn’t have a big difference between waist and hip unlike me, so jeans tend to sag down over the course of the day, and a longer rise means further to sag. The jury is still out on that though, until I see how these wear over time. But we’ve had a couple of “pull your pants up!” moments already.

While this isn’t selvage denim (the pattern can supposedly be used with selvage denim, but the upper sizes are too curved in the hip to do so without tweaking the pattern to make the side seam straight, and I’m not really sure how to go about that effectively), to mimic a couple of RTW jeans, I pressed the seam allowances open on the side seams. Mel really likes the look, and the pop of the red serger thread (we decided on the color together before getting started). 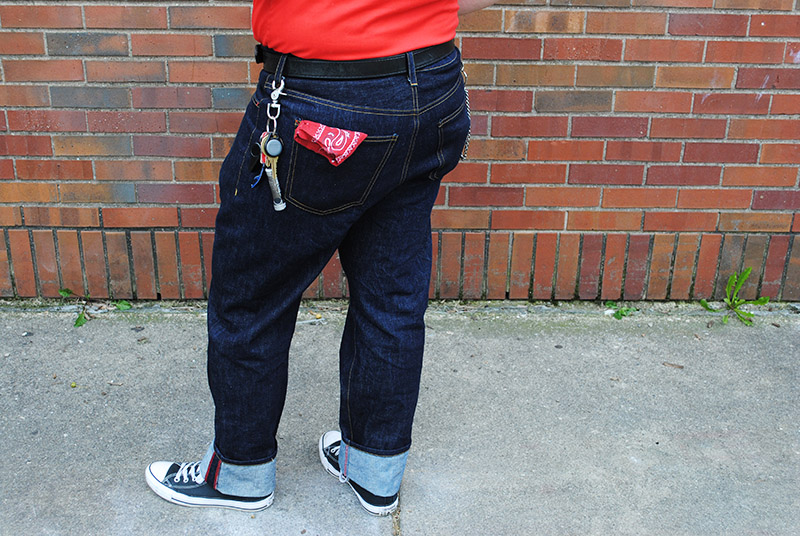 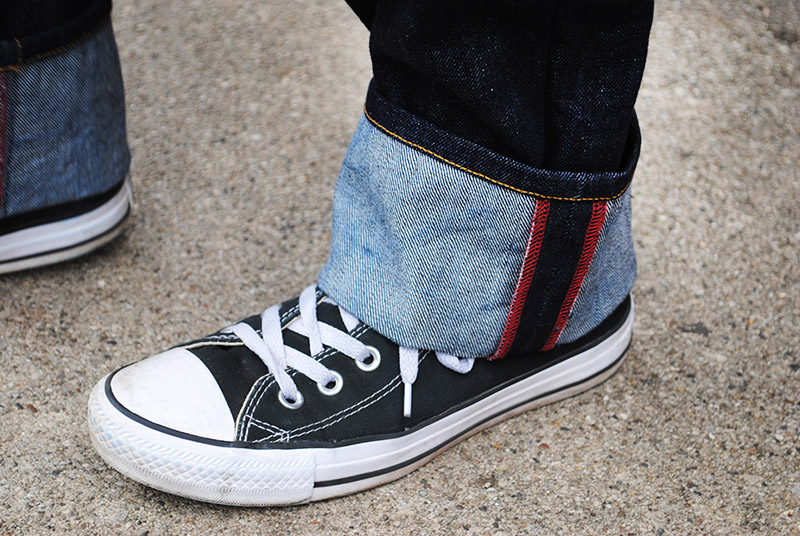 It’s really weird sewing something for someone that you have to look at wearing the item all the time. Maybe if it was something easier to fit than pants it wouldn’t be. But it’s hard to turn your sewing mind “off” and not see all the little things you might like to change. When I’m wearing something I made, I don’t do that, but looking at someone else in something I made… a little trickier! Fortunately, Mel has worn these a few times by now and they’re starting to blend into the background just as “jeans” without me seeing all the little things that bug me or I might change.

And really, it’s hard to complain, because this face says it all! 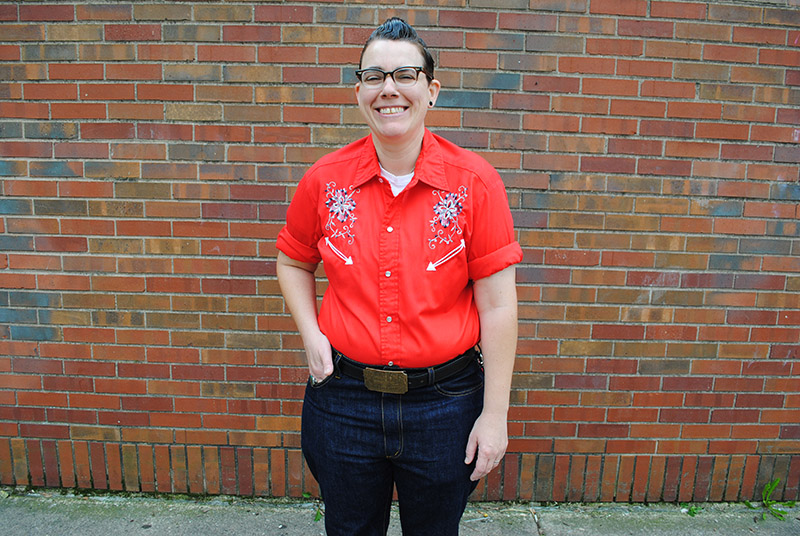 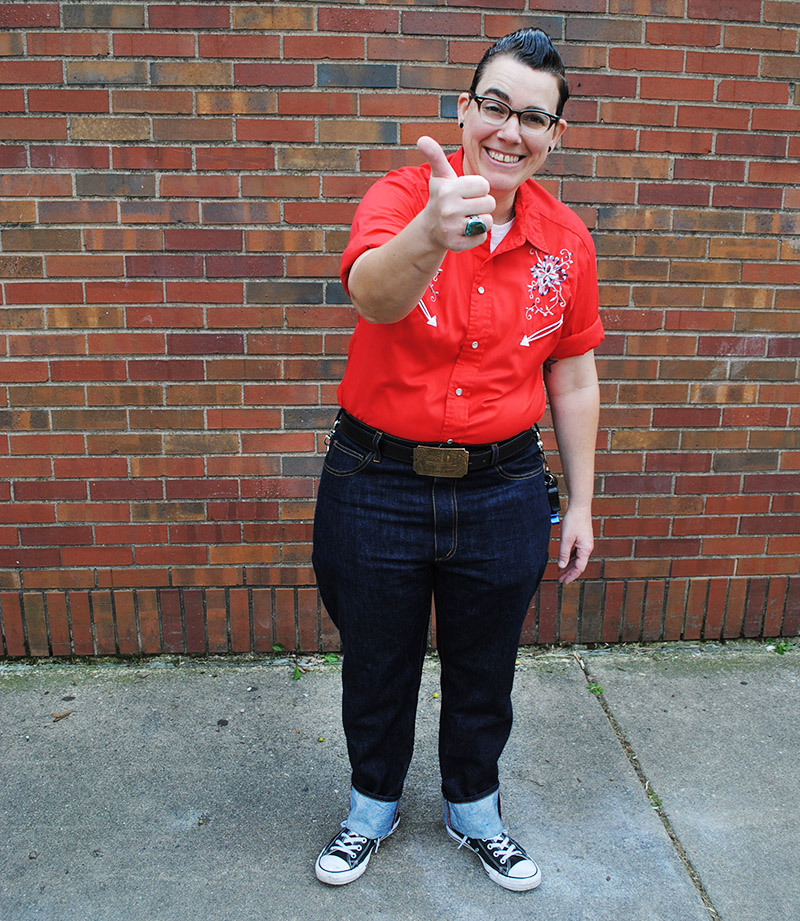 And Mel has told me more than once, “These are the best jeans I’ve ever owned!” Sooo I’d call them a success! 🙂 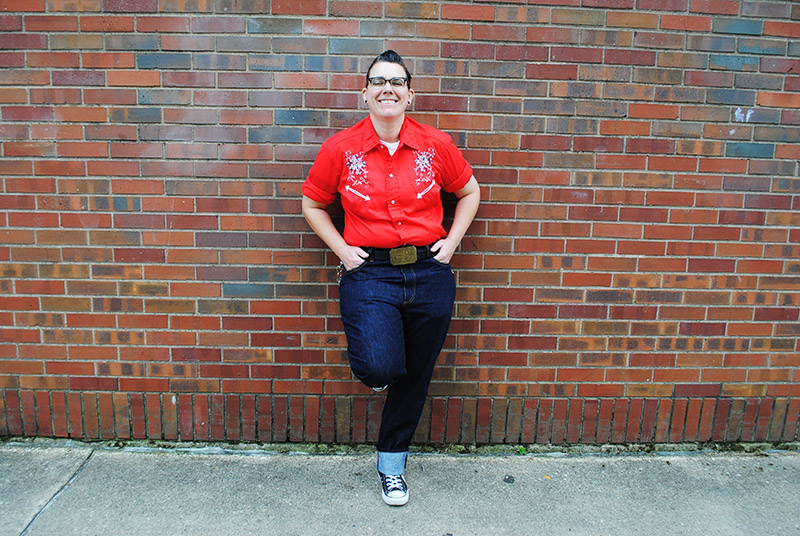