Yep, my Ginger jeans are finished. And honestly, they might be my favorite thing I’ve sewn. I LOVE THEM. All caps kinda love. Actually there’s a lot of all caps in the next couple of paragraphs, I’m that excited! 🙂 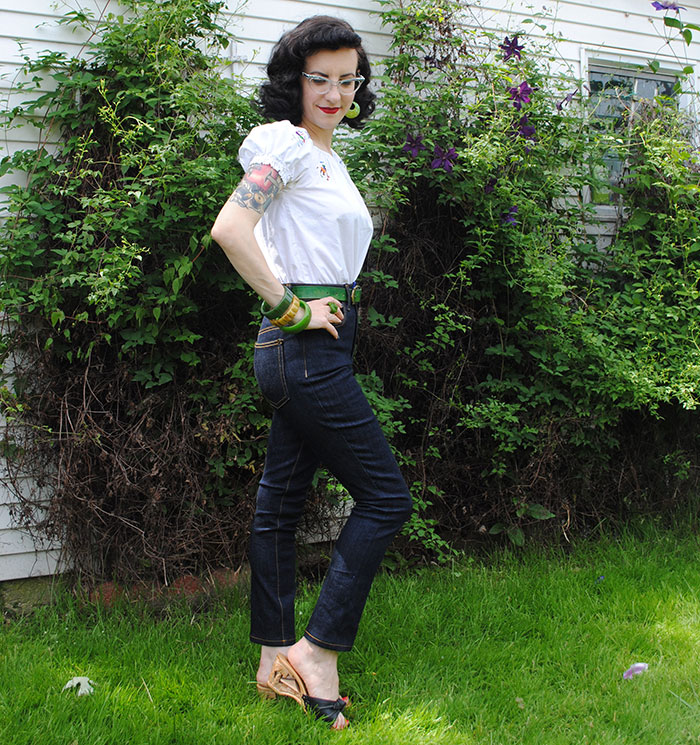 They’re not mistake-free, nor a completely perfect fit (is anything ever?). And I’ve done tailoring, and sewn jackets, but this is some of the most precise sewing I’ve ever done. I am just SO FREAKIN’ PROUD of these jeans. There are a few minor issues, but I don’t think I’ve ever looked past them so easily as I have with these Ginger jeans, because everything else about them tickles the living hell out of me! They feel durable, they look good, and I’m going to wear the hell out of them.

They make me look down at my legs and do a double take. “Those are some nice jeans I bought—no I didn’t, I MADE THEM. HOLY COW.” And because I’ve read nearly every jeans blog post I could find to psyche myself up for it, I know my thoughts are not alone. There’s just something about sewing jeans that feels like you’ve really crossed the RTW border! 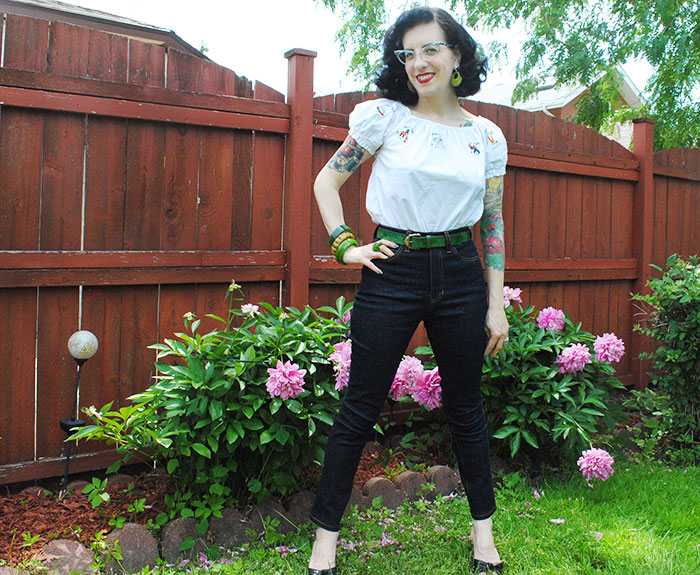 As I discussed before, I wanted a pair of skinny jeans that had a bit of a vintage vibe to them, it being me we’re talking about here and all. And I think I succeeded! I know a big part of that is because I’m the one wearing these. I mean, if someone who dressed totally modern had them on, they’d look modern. So of course personal style is a big part of it. But I also did raise the rise 1″ so they’d fall closer to my natural waist (although they don’t quite reach it still). They are indeed skinny so they’re a tight fit and kind of give off a rock ‘n roll vibe, I think. I still generally prefer non-fly-front pants for more of a vintage feel but can’t argue with the ease of wearing a fly front now and again. 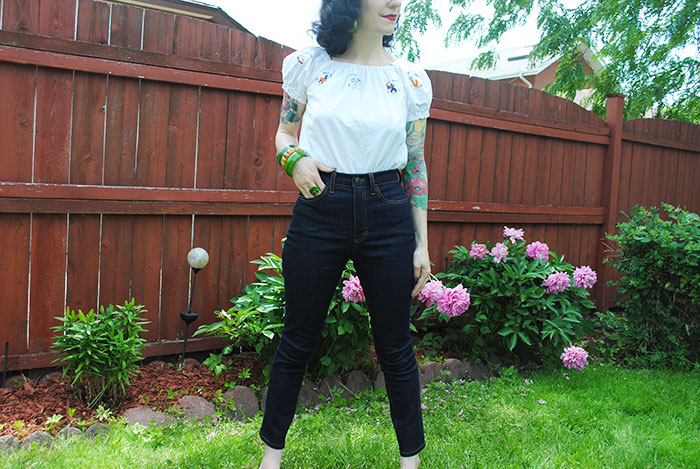 I used an inexpensive denim from Denver Fabrics (this one here), because I want to do a few versions before cutting into the good stuff. I have to say, I actually like this denim a lot! It’s a medium weight so it’s hefty enough not to show every panty line or pocket stay line in existence, and it’s not hugely stretchy (only 2% lycra, though I think it caused some of my issues with the fit being too tight first basting). The description read “This medium weight cotton fabric has a stiff hand and slight stretch” which is totally accurate. I wore these a lot this weekend when we were in St. Louis, plus there and back in the car (12+ hours round trip sitting on my butt), and they’ve stretched a bit but are totally still wearable. Not saggy baggy ridiculous at all. And bonus, I bought 2 yards and still have enough leftover to make a pair of shorts.

I’ve actually come to really like sewing with denim. It doesn’t shift around, it’s not difficult to cut (especially if you use a rotary cutter like me) and it’s about the most well-behaved type of fabric I’ve sewn with. Seriously! If you’re nervous about sewing with denim, Handmade Jane did a post on denim tips, and Sallie Oh on Madalynne’s blog did a post about sewing jeans a couple of years ago. It’s really not hard to work with at all. Plus, that “stiff hand” was really pleasing to work with. Sometimes lightweight and really stretchy denim is nice, but I generally prefer a more rigid denim, and this is pretty close, but with some stretch. I’m impressed for such an inexpensive, purchased as “these are kind of a first muslin” type of fabric.

While I don’t think of sewing in terms of being less expensive than buying RTW, I made these jeans for about $17 in supplies. Whoa! 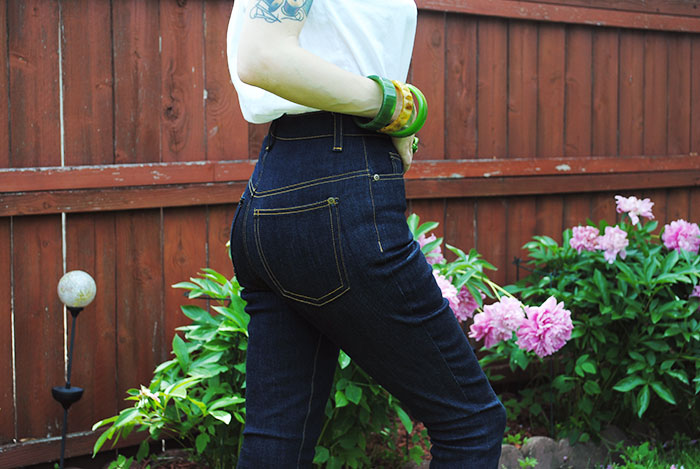 I talked about my progress in-depth already, but here’s a rundown of most of the adjustments I made or options I went for:

Look at the fun innards!! I used an out of print Timeless Treasures galaxy print fabric. I bought it to sew a dress (that I haven’t made yet), but seeing it inside my jeans puts a huge smile on my face. The sentence “I love the galaxy inside my pants!” actually came out of my mouth on accident and I was so blinded with fabric love, Mel had to point out the hilarity or what I’d just said. I’m tempted to use this fabric for future waistbands and pocket bags because I love it so much. Ooh, I might try this constellation fabric! 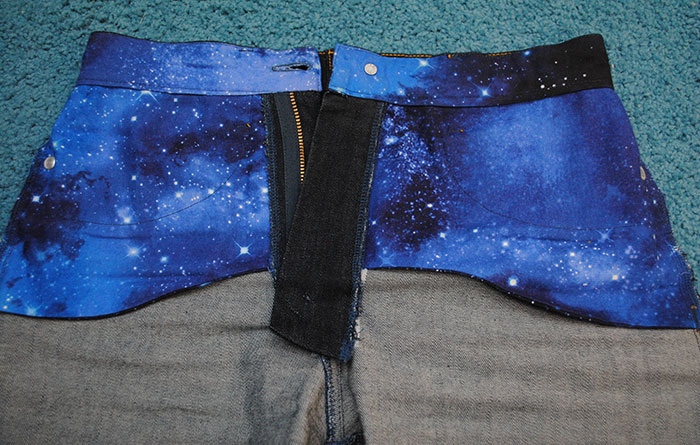 The contrasting buttonhole is something I’m really happy I chose to do. While sewing obviously allows you to create anything the way you want it, having the option to do a tiny little personal touch on an otherwise pretty standard item (does it get more standard than jeans?) is really fun. I definitely plan to do this on future pairs. I think I forgot to interface the buttonhole area and it could nicer and more filled-in up close, but it’s not hideous. (Of course, my samples looked a lot better.) Also, I’m glad I went with a somewhat dark fabric for the waistband facing as try as you might, it’s really hard to not have a tiny bit peek out on that left center front seam.

What you also see some of in this photo is one of my proudest points on this project, the waistband. I really dreaded this part, I admit. All the topstitching (around corners and the slight curve of the yoke), the fiddly bits at the center front that I never quite get lined up right (thankfully most of my pants fasten at the side, ha ha), the belt loops. But I nailed it. Well and truly. And I never say that. It’s an honest “I am genuinely pumped about how this looks” and not me saying “it’s good enough and I’m fine with it”. Definitely the neatest waistband I’ve sewn. 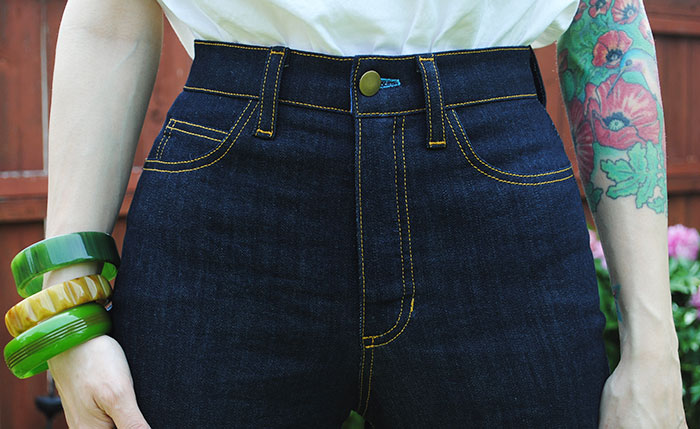 Sorry, enough with the creepy crotch closeups. But man, you work so hard on all that topstitching and the waistband and fly you do kinda want to show it off. 😛

So from proud points to DUH points. Here are my big areas of stupidity on this project:

In terms of fit, I mostly really like how these fit. I did have to let out a lot of the seam allowances from 5/8″ to 3/8″ (except the waist and crotch) to get it to those point, so I need to decide how to cut the pieces out next time.

The upper calf and knee is a bit too tight, enough that I sometimes have to pull the ankles down a bit after standing up as it gets hung up at my knees, although it’s not as tight as I remembered when I basted them together. Wait, is this why most skinny jeans are bunched at the ankle, so when this happens you don’t notice the legs riding up? Anyway, by comparison the ankle is too wide. I could have gradually gone back down to the original 5/8″ seam allowance but didn’t notice until after they were done. Oops. And while I do tend to hyperextend my knees while standing (which is extremely obvious in jeans this tight, who knew), I don’t think that’s the source of the calf tightness. I think it’s more due to shortening on the lengthen/shorten line, a whopping 5 1/2″, which probably drastically changed the lower leg proportions, so I’ll address that all next time. I kind of ended up with a skinny/stovepipe hybrid here. 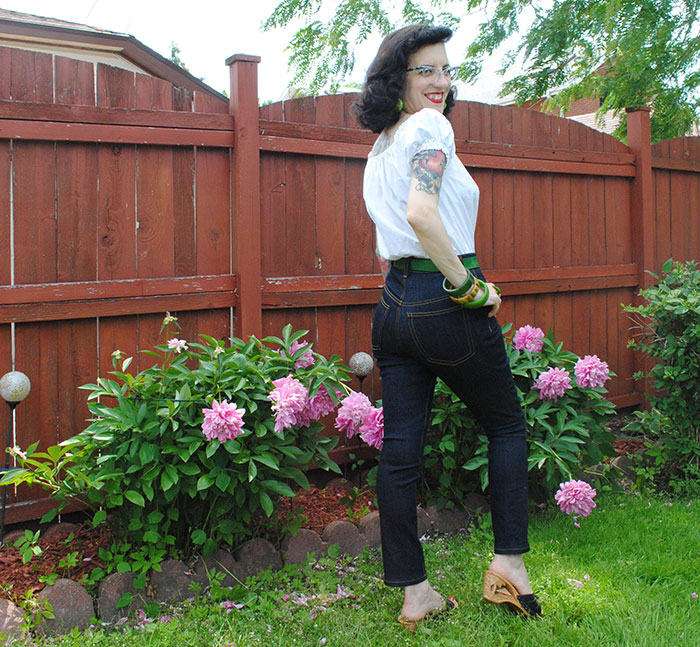 But the side seams hang straight and I’m not busting out of them! Especially not after wearing them a bit (these photos were literally their first outing). They’re fitted but skinny jean fitted, not “my jeans are really way too small” fitted. I feel pretty awesome in these, I have to admit! 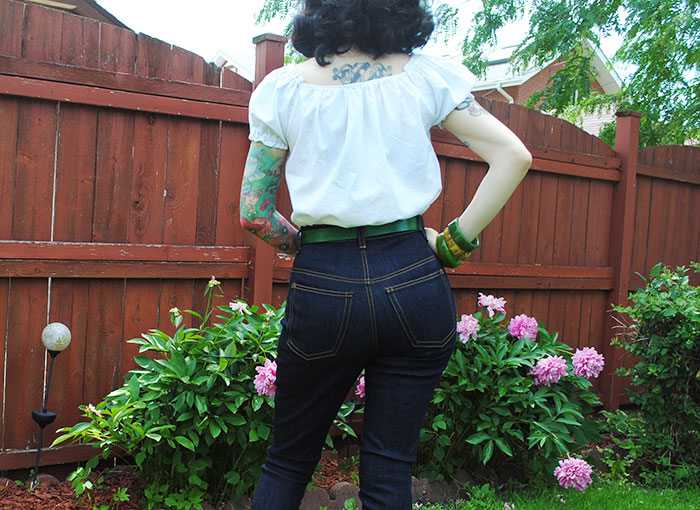 Oh, I didn’t need to do a swayback adjustment after all, this surprised me! Unlike on my Butterick cigarette pants where after a wear or two, I develop a hump of excess fabric at my lower back after a few hours of wearing post-wash (need to try and correct this on my next pair), my Ginger jeans are pretty good in the back for me. Only a small bit of excess fabric after a few days. I suspect that could change if I raise the rise again so I may need to adjust.

Speaking of the back… 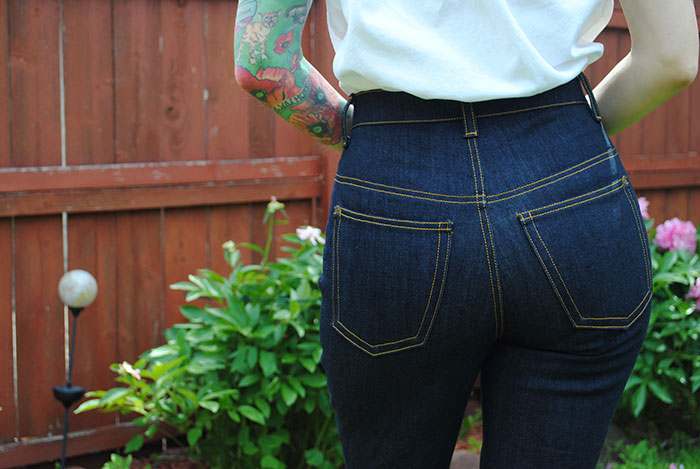 Not bad if I do say so myself, right?? These jeans make you feel great about your ass, ha ha!

In the end, there’s actually a lot less wrinkles under the butt than I thought when putting these together, woo hoo! Of course wearing them a few days means there’s more, but that’s the way that works. The bulk at the side seams that I saw as folds of fabric when basting was just because the seams weren’t pressed and trimmed, so I’m quite pleased with how the thighs look. And I’m happy with my back pocket placement. Next time I may try to deepen the back crotch curve a bit for my low butt, but I’m happy with the front crotch curve. Any wrinkles you see there are mainly creases from sitting and movement. No real frowns or smiles. 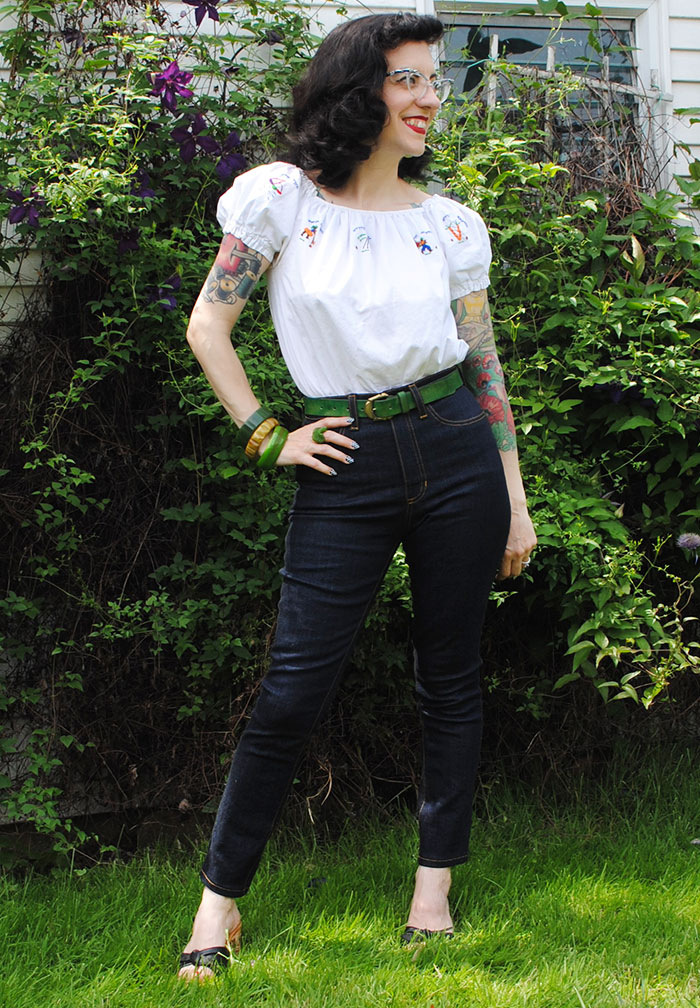 Let me just say this about rivets: there’s nothing to strike fear into your heart like pouring your sewing soul into an involved project and then driving holes through it and hammering on hardware that you hopefully won’t mess up. And I could never get the rivet slightly hammered in to check if it was going in straight, so I just had to go for it. I also had a really hard time with the denim “heeling” back around the holes. Only afterwards did I realize small diameter knitting needles would be perfect to expand the holes after I use my awl, so I’ll try that next time. Also next time, I’ll probably add rivets to both sides of the back pockets and the coin pocket, but I couldn’t stomach more this go. 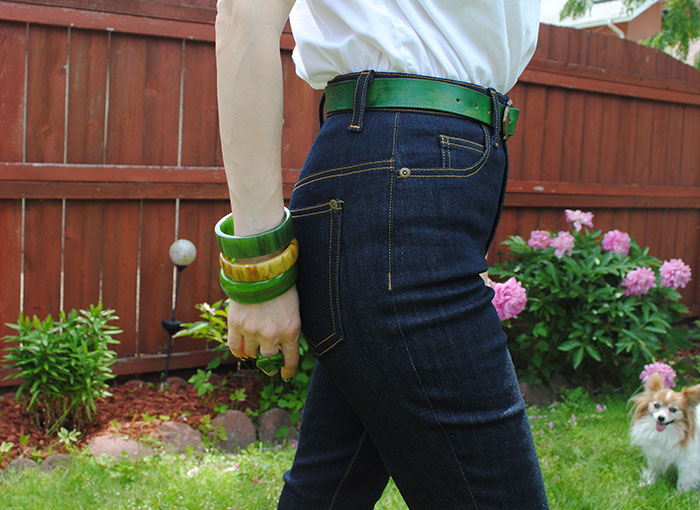 In the end, I think it’s a great starting point for a slim jean for me! I could see making several variations. Slightly higher rise, less skinny leg, capri-length, maybe side-fastening. Now I feel like the sky’s the limit! 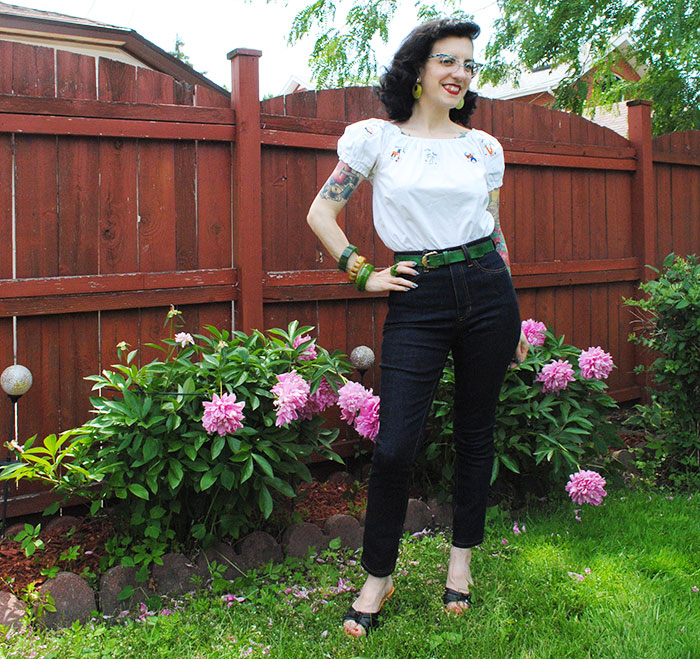 Following the pattern instructions and the Ginger sewalong, I learned SO much. I couldn’t have asked for better resources, seriously the best starting point to sewing jeans I could have hoped for. If you’ve made it this far in this post, and you’re thinking “oh maybe some day” or “my skills aren’t there yet” or “jeans look scary” I’ve been there, too. Just dive in. Take it one little step at a time and go slow. You’ll be surprised how quickly you’ll realize you too are sewing jeans, and it’s amazing and awesome, and you’ll feel like a sewing rock star.

But there’s still a big part of me going, “OMG I made jeans.” I still can’t get over it! 🙂 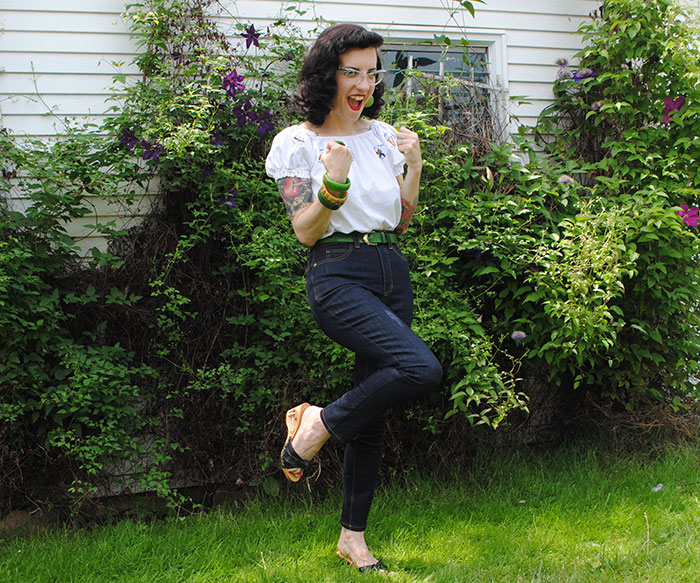