Something like 3 months ago, I finished making a pair of jeans. When we went on a vacation to northern Wisconsin in October, we took photos of them. Finally today, I’m sharing them. Let’s have a little sewing, shall we? 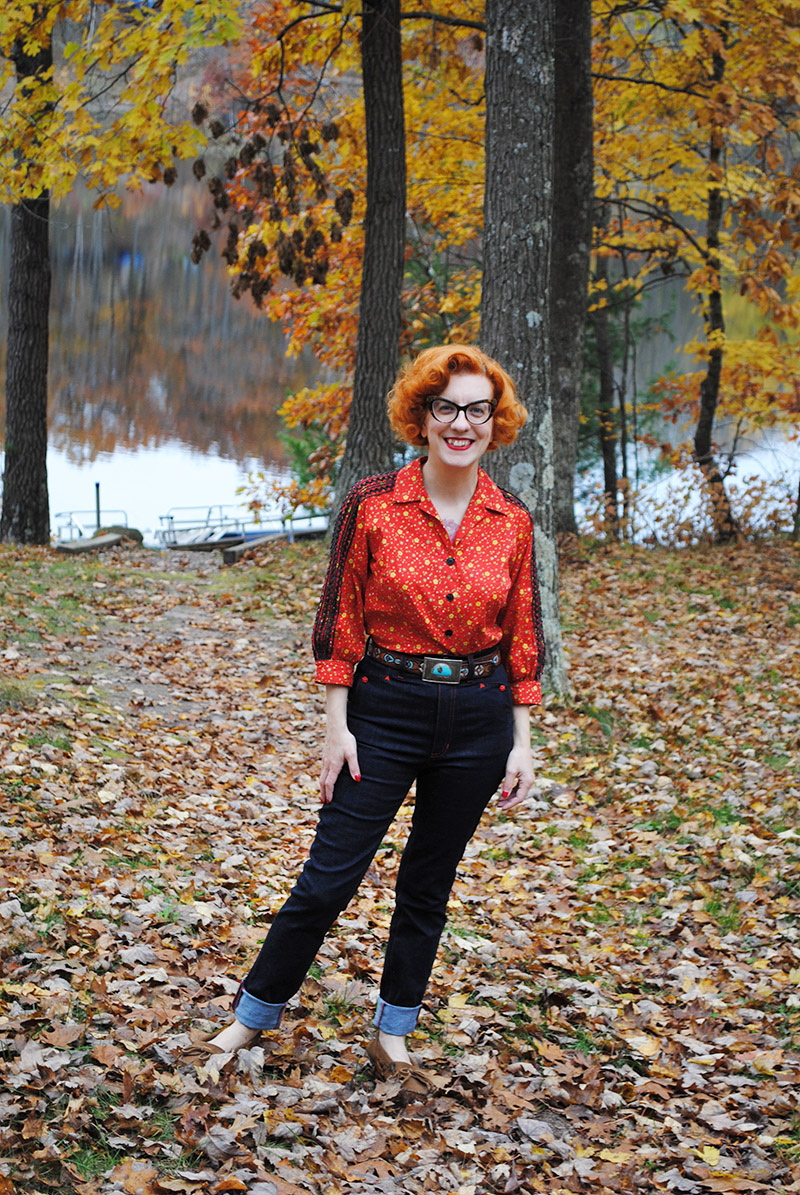 These are my third pair of Ginger jeans. I sewed them immediately after sewing Mel’s Morgan jeans and my Safran jeans, and by the end of all that I was totally jean-ed out. I’d been saving some Cone Mill stretch denim from the kit I’d bought eons ago for a simple pair of Gingers but my mind got carried away and I made these ones instead. Which means, I’m still on the market for a simple pair, and if my denim comes fast enough, hope to sew them up before we leave for my mom and step-dad’s for Christmas (we’ll see). 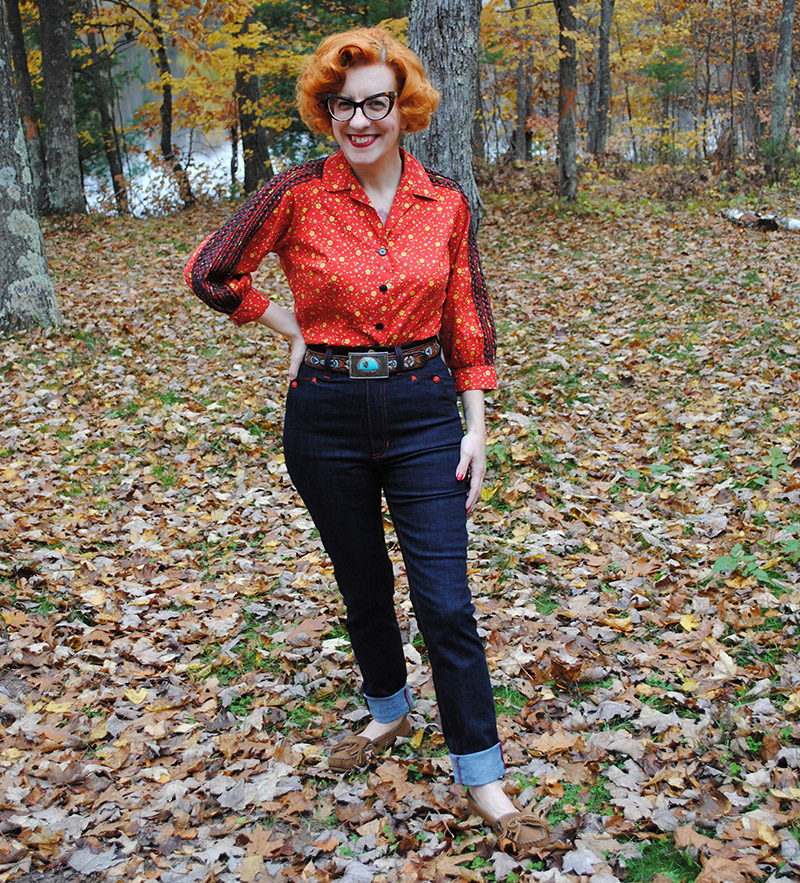 These jeans are kind of a success and failure at the same time. Success because they fit as I wanted them to, everything went together well, and I’m really proud of the hand sewing and other small details.

Failure because I made a decision to do something fun, making Western-inspired scalloped front pockets, embellished with hand-worked arrowhead tacks, but the end result had a major flaw. I did a couple of practices of the pocket, loved the look, and while I knew I was using a stretch fabric, and a pattern with negative ease around the hips so the scallops would bow out a bit, I also then didn’t use a dark pocket fabric fabric, and kind of didn’t think the pockets would bow out as much as they would. Which meant after alllll that work, when I tried them on after basting, the pockets looked really kind of stupid. So I closed them up with a red vintage button. I definitely didn’t heed the adage that form follows function. 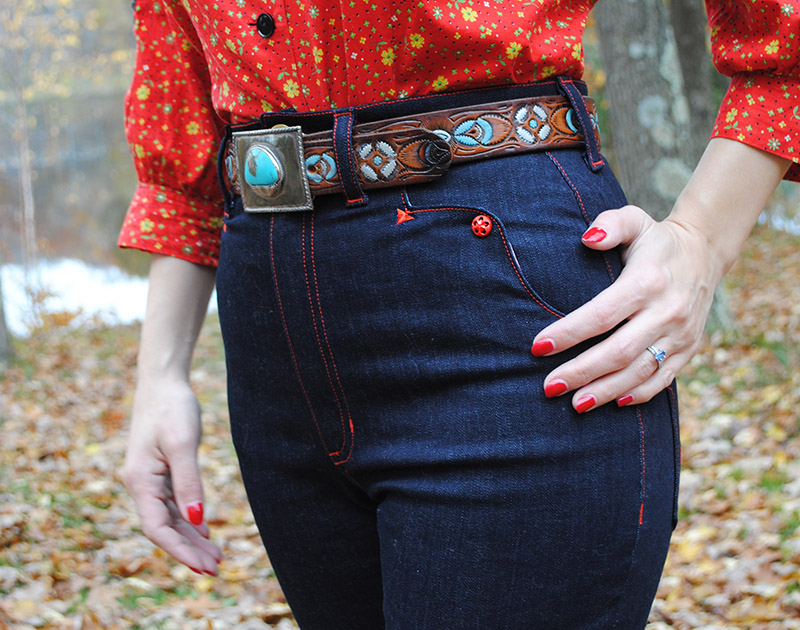 I didn’t bother with a buttonhole since I couldn’t really see a time when I’d open them, because a button on your front jean pocket is awkward as it is. So I can’t stuff my hands in my pockets (well just in the lower part), which isn’t usually that annoying because I don’t do it that often anyway, but let me tell you, closing up a pocket sure makes you subconsciously want to stick your hand in your pocket! 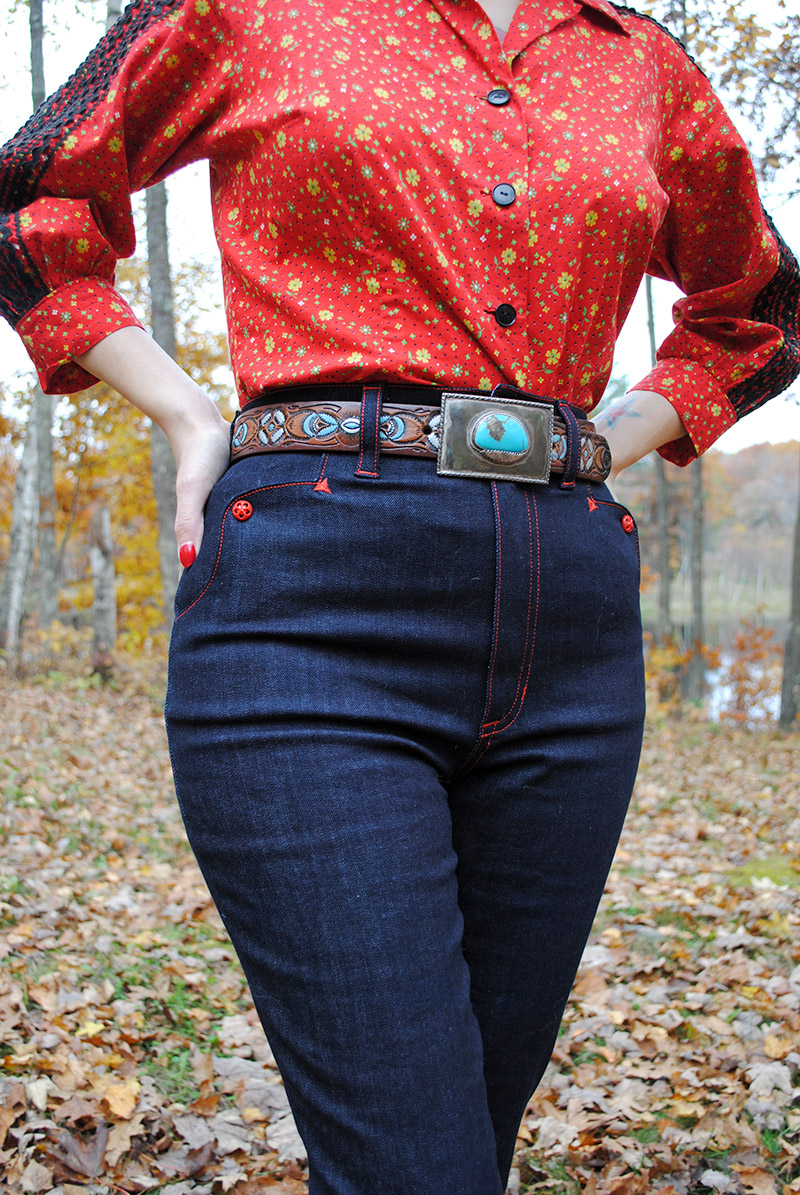 But, I can revel in the fact that I love the shape of the pocket at least, the button is cute, the arrowhead tacks came out great, I really like the contrast red topstitching, and on the flip side (literally), I made awesome back pockets, and a yoke adjustment to make it extra heart-shaped. Which makes for a rear view of these jeans that I’m pretty proud of if I do say so myself. 😉 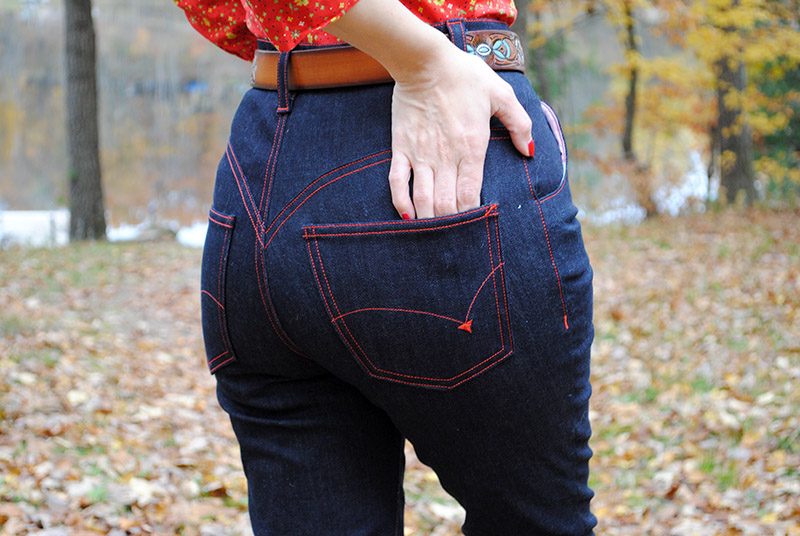 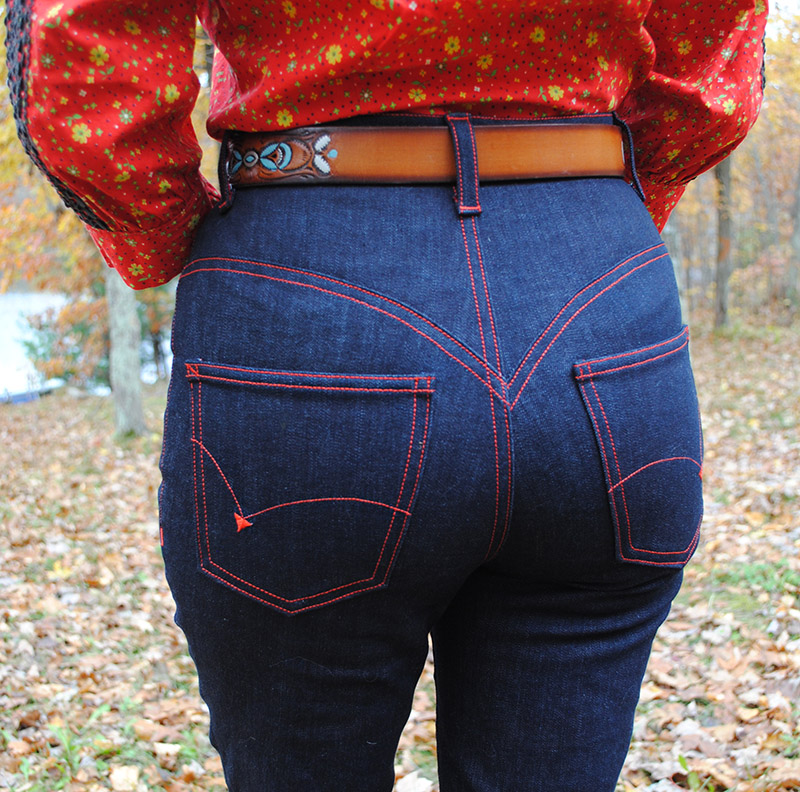 I love that yoke sooo much! I got the idea after doing a slightly more curved yoke for Safran, but I wanted to go really heart-shaped with pair. This may need to become my go-to back yoke for Ginger! 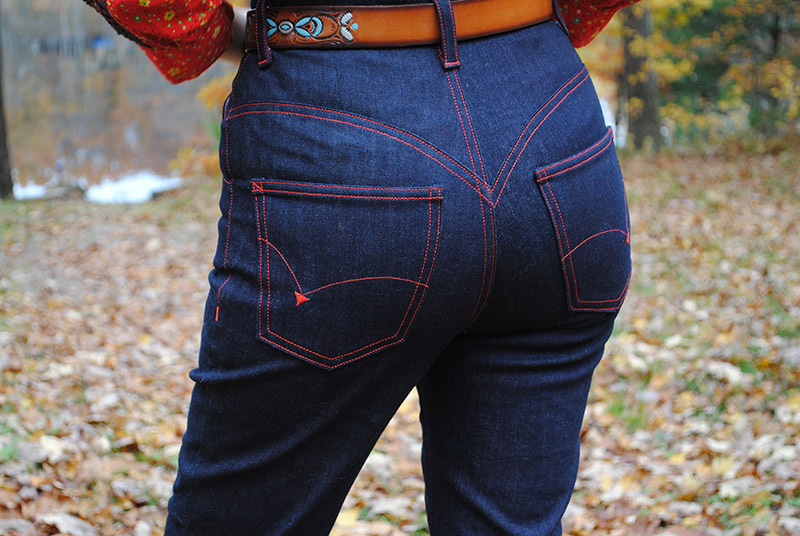 I keep a sewing notebook where I write down notes for all my projects, except sometimes when I’m rushing or really getting into something, I forget to write things down. I looked at my page for “Ginger #3” when I went to start this blog post… and it was blank. Thanks, past Tasha. Big help. So I’m not really sure what else I adjusted. I know I widened the calf and possibly the thigh a bit to make them more straight leg, since I thought it would suit the Western vibe. And I made them long enough to cuff, and pressed the outer seams open and used red serger thread and bar tacks. 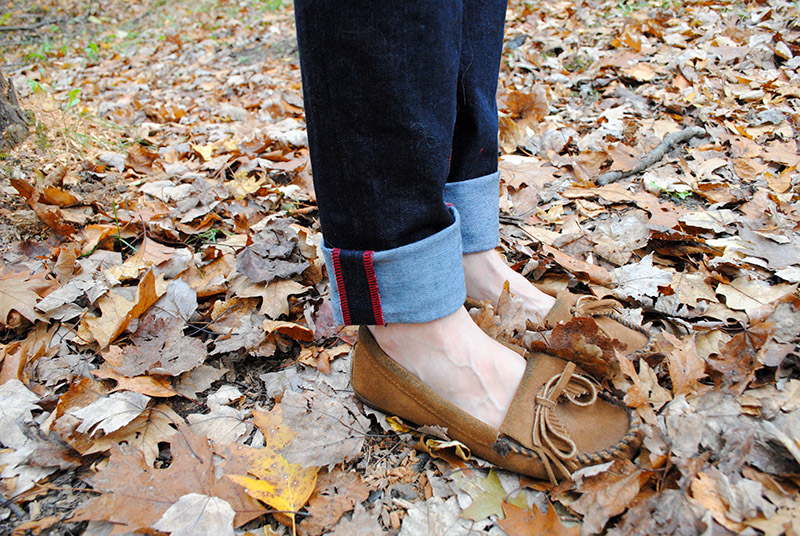 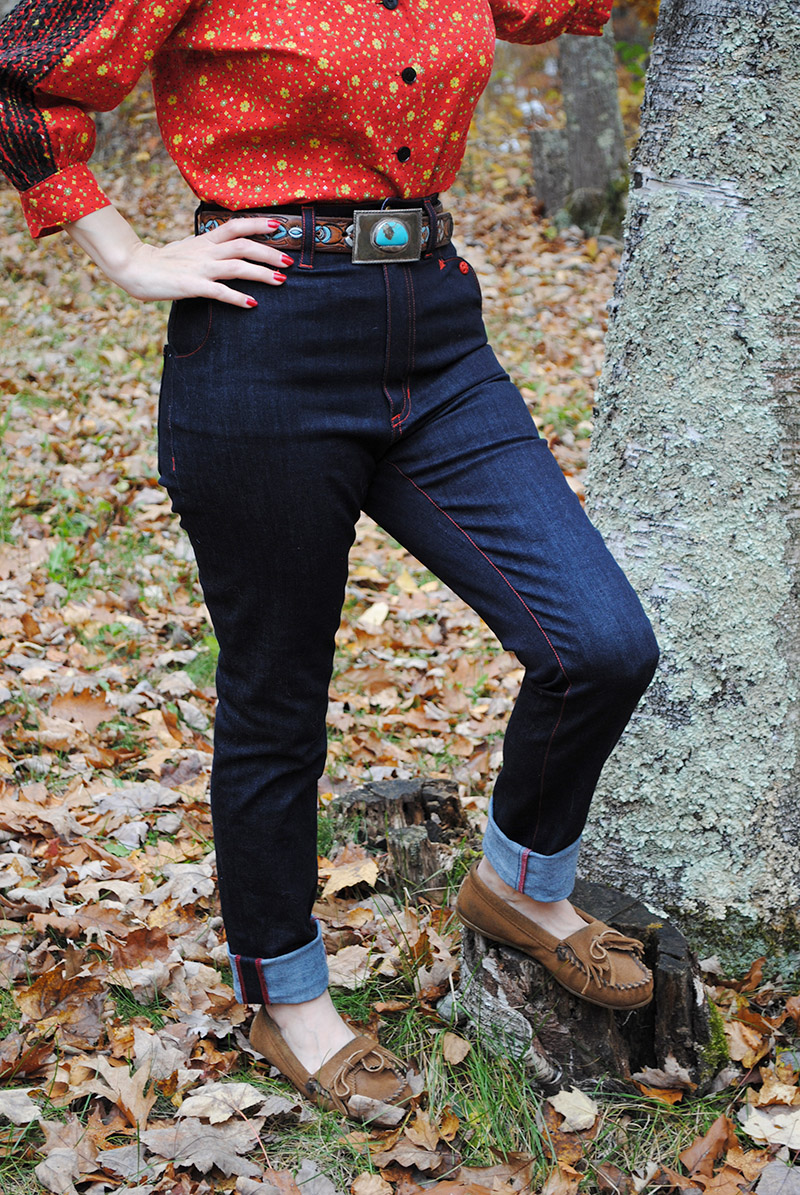 The rest is a mystery! So instead of me rambling about modifications and things, enjoy some more photos around the cabin we stayed in. The grounds were glorious, and we managed to hit the fall colors at exactly the right time. 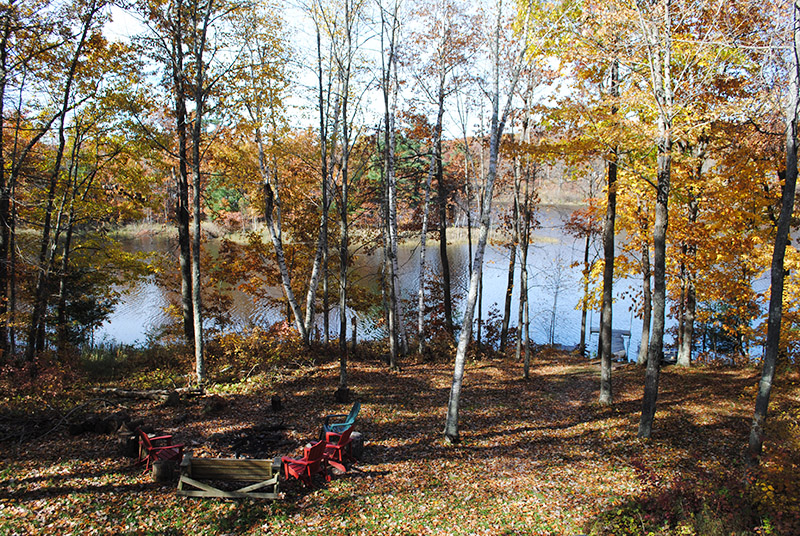 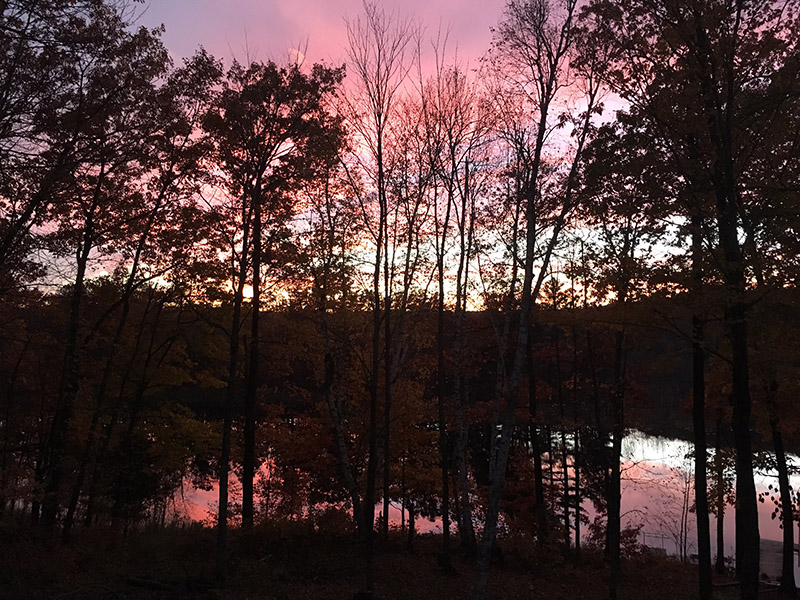 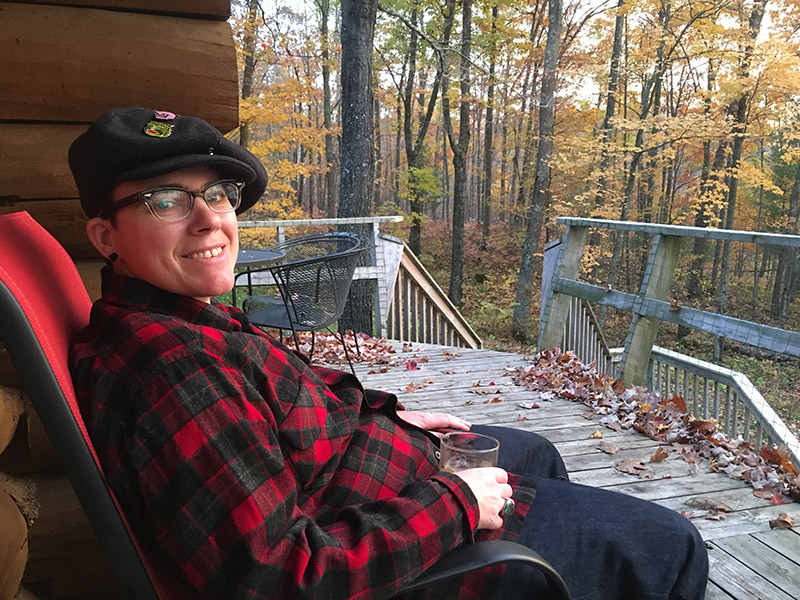 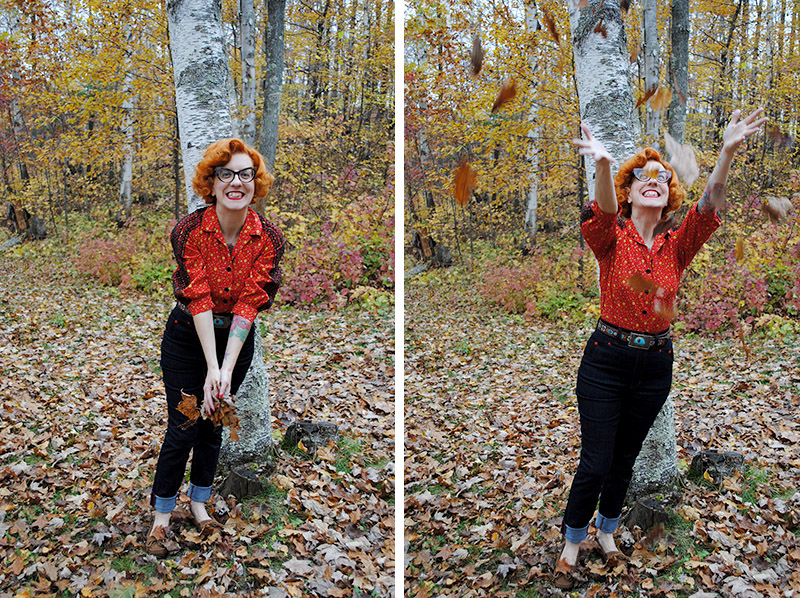 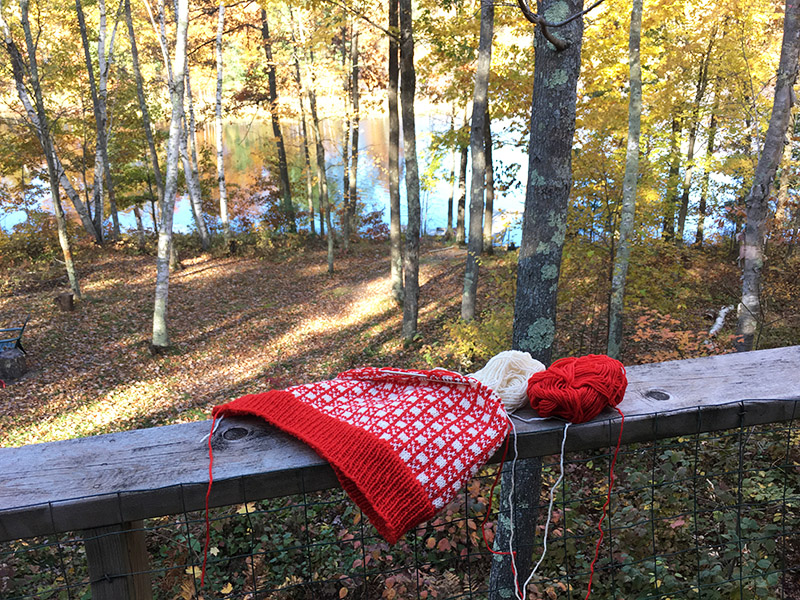 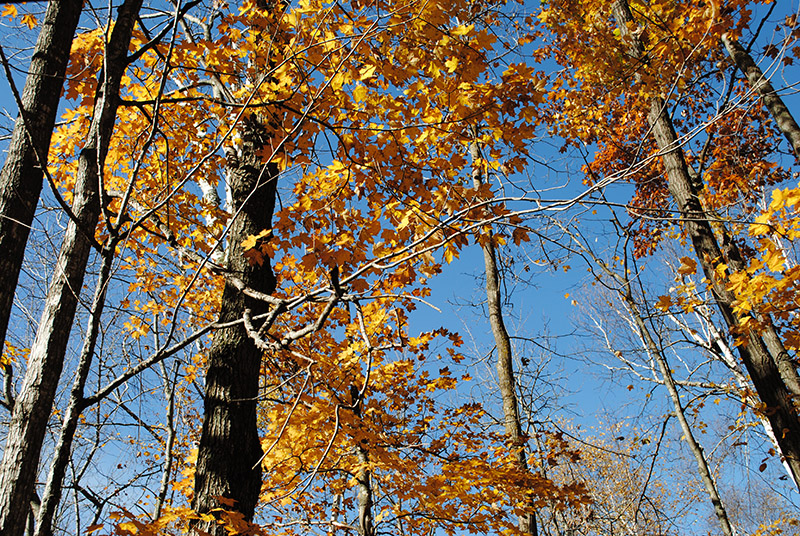 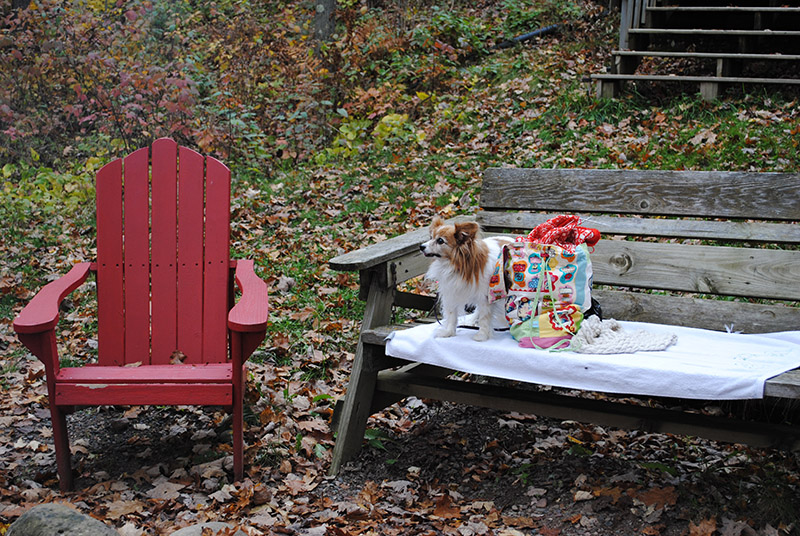 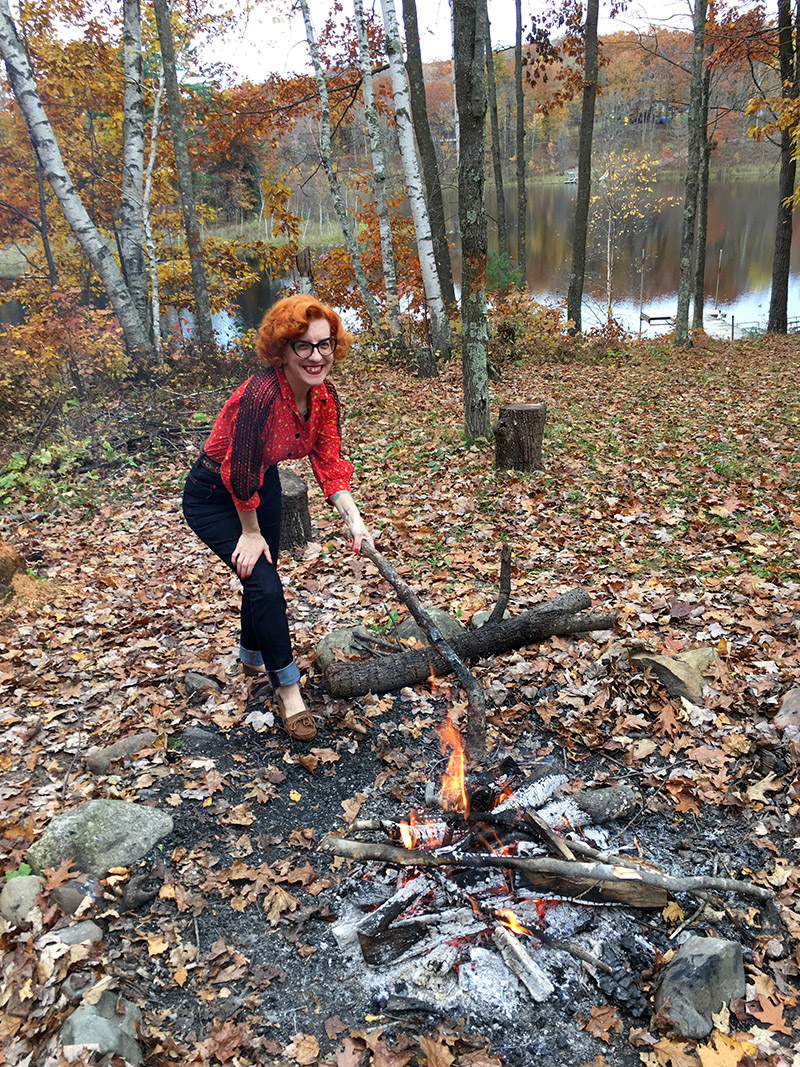 Like I said in the beginning of the post, I do plan one more pair of jeans soon, plain ones though, no cuff, no fuss. Either Ginger or Safran or a mashup, not sure yet. I had a difficult time finding denim this time. I used Cone Mill for these Gingers and I like the look of the denim, but I can’t stand that it attracts pet hair, when literally no other jeans I have ever owned (either I’ve made or purchased) do/have done that! So annoying!!! What gives? It also kind of curls at the edges when sewing, which no other stretch denim I’ve used does, which is likewise annoying (but gah, not as bad as the pet hair &%^$%##@). I love my Gingers in Theory denim but they’re not super stretchy, and I did the waist stay, so they can be a bit uncomfortable after several hours (and plus, I want a non-cuffed pair anyway). So I had to suck it up and get more Cone Mill denim for my next pair as nothing else I saw online seemed to fit the bill (I wanted really dark indigo denim without lots of streaking and with a decent amount of stretch). It’s a slightly different weight, 12 oz instead of 11.5 oz so I’m going to just hope maybe they will be different enough not to be a pet hair magnet. I’m not holding my breath.

But, a few things to take care of before then, including sewing what will hopefully be a fun Christmas gift, and releasing a knitting pattern next week! 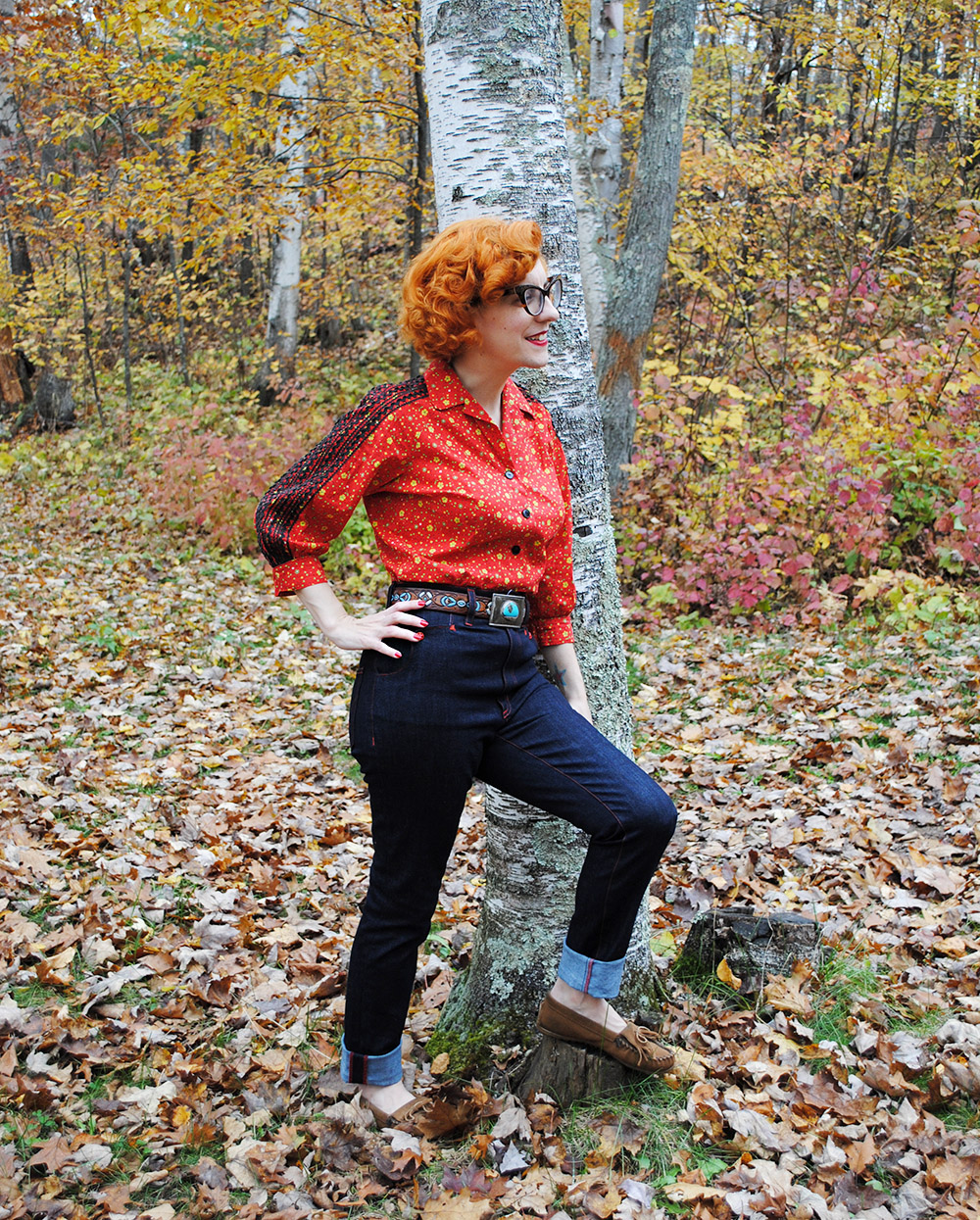