In fact, this is a dress I sewed an entire year ago. Mel and I take a trip to the Bristol Renaissance Faire in southern Wisconsin every summer, and I enjoy wearing something with a kitschy Renaissance-ish print because that’s the kind of person I am. In rotation, I have a skirt I sewed years ago with castles on it, a beautiful vintage rayon blouse that’s nearly beyond repair with knights fighting on it (seriously, still trying to figure out how to repair a hole in the middle of a sleeve), a vintage skirt with knights fighting on it, and now this dress. 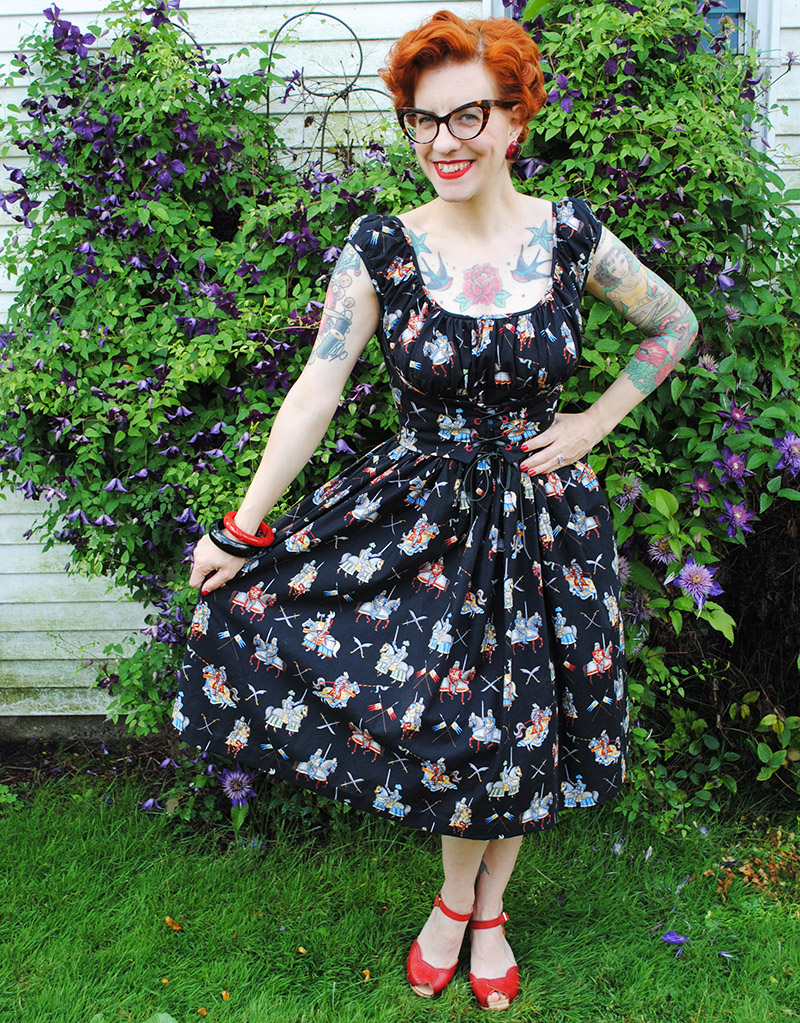 In fact, the only reason this dress has now made it to the blog is that I sewed it for last year’s faire and pulled it out to wear this year, but changed my mind and wore the vintage skirt and outfit below, instead. I loved this outfit! 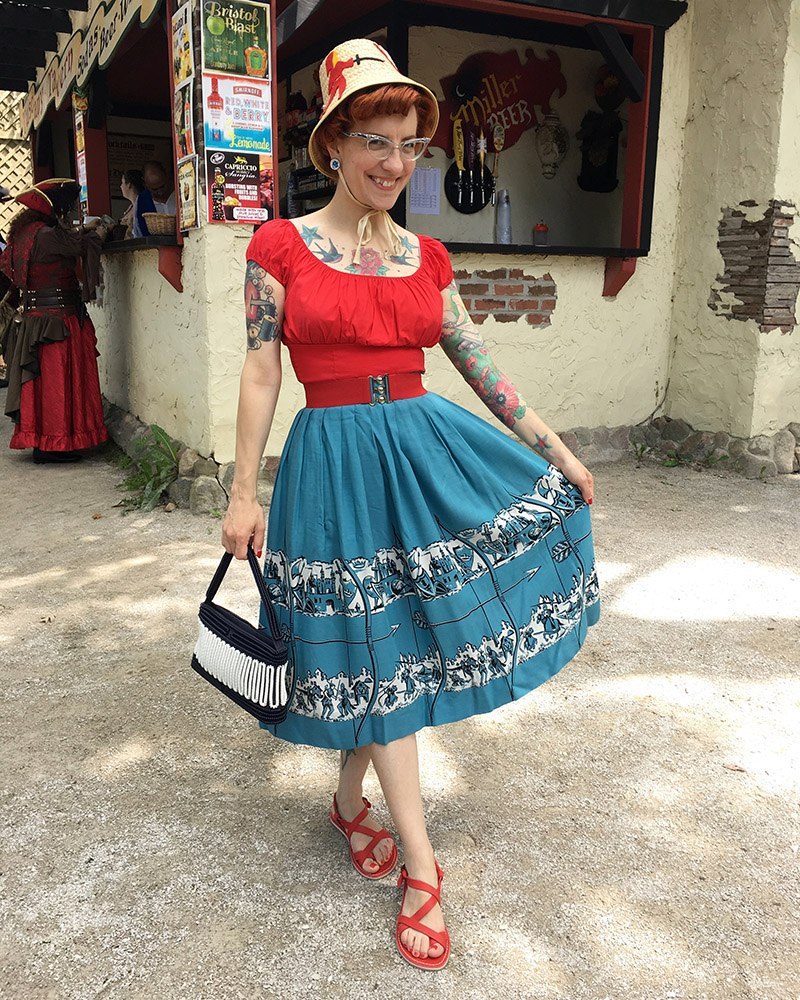 But, I do really love my utterly cheesy dress. It’s super busy, so it’s probably difficult to pick  out that it’s Gertie’s Butterick B6322 pattern, with the cute dirndl-inspired overlay. 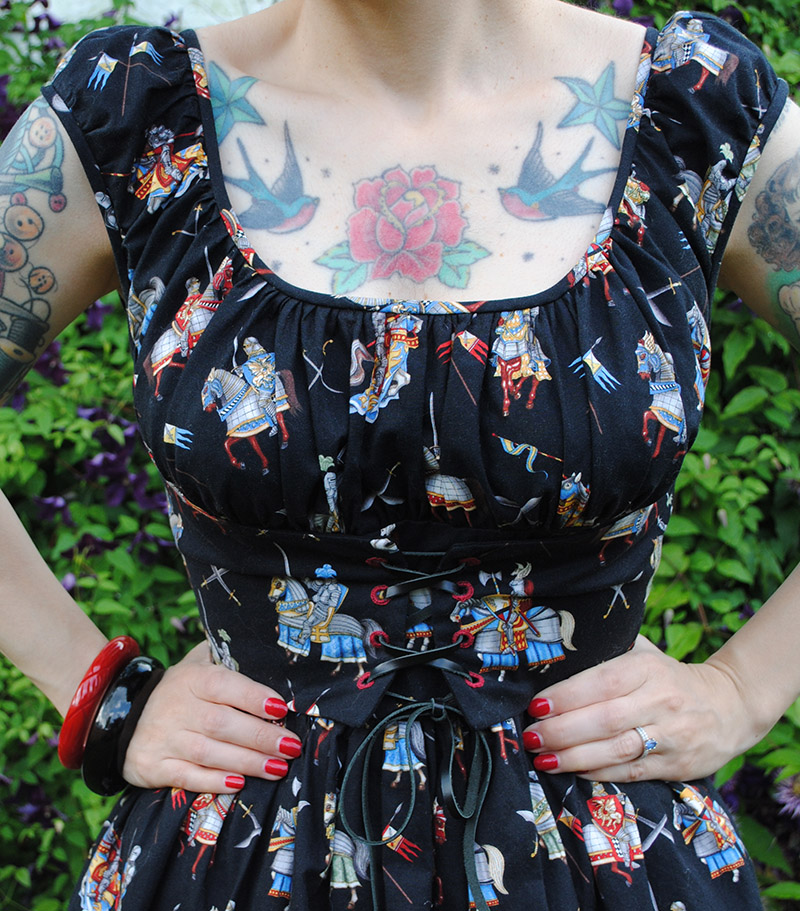 I remember at the time I sewed this that I contemplated making the overlay in solid black, but decided I didn’t actually want it to look like I was wearing a corset over it, I wanted it really obvious it was part of the same dress. Like, I’m wearing a kitschy Renaissance-print dress, folks. I’m not actually trying to bar maid it up and make this look anything other than a kitschy vintage dress. Whatever… made sense in my head at the time. 😉 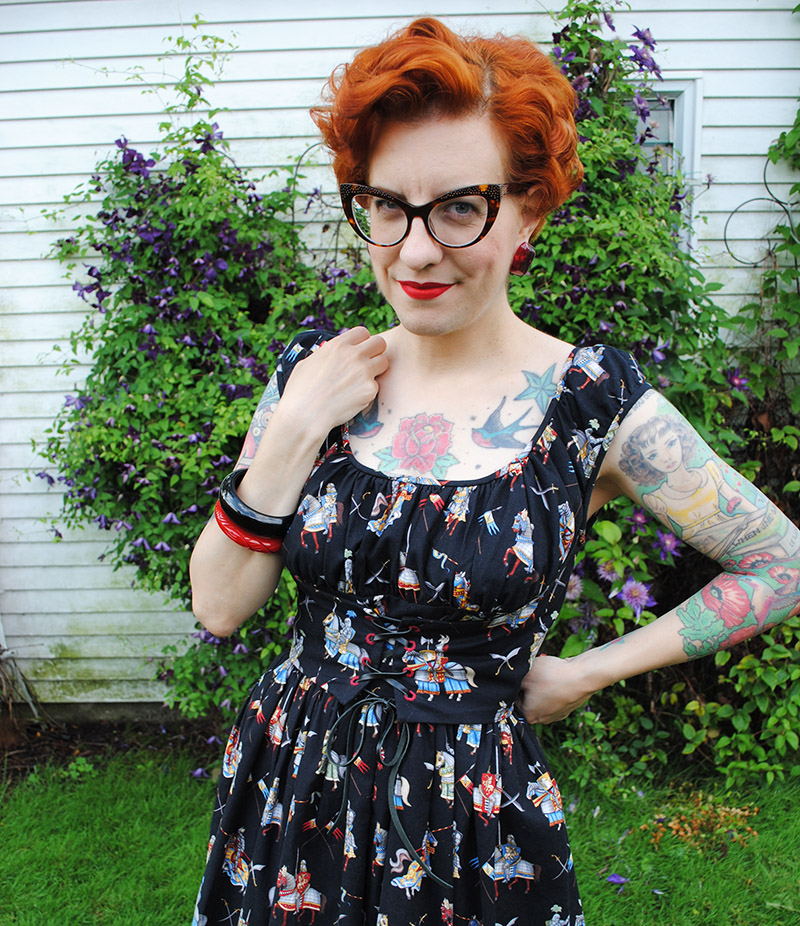 I sewed a size 8 which I typically do in Butterick patterns, being about 1 size down from what the envelope would have me believe. They have a lot ease in them. In fact since I think I was in a rush when I sewed this, I didn’t do a muslin and discovered that it was full 2″ too big around the torso and 1″ too long at the waist, when I put the bodice together. So I simply hacked off length off the bottom and took the side seams in (and did the same on the overlay). Worked well enough.

I didn’t have any eyelets for the laced up front, but I’m a fan of hand-worked buttonholes! So I practiced a few round ones, and did contrasting red ones as eyelets on the dress. I love that it’s just a little nice personal touch. And yes, it’s a busy print but I did totally plan it that there are two knights right at the center front of the overlay! 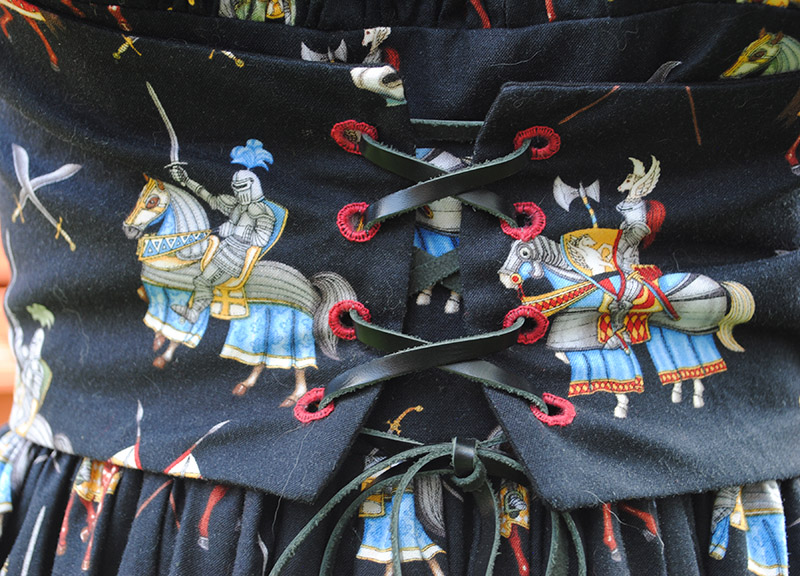 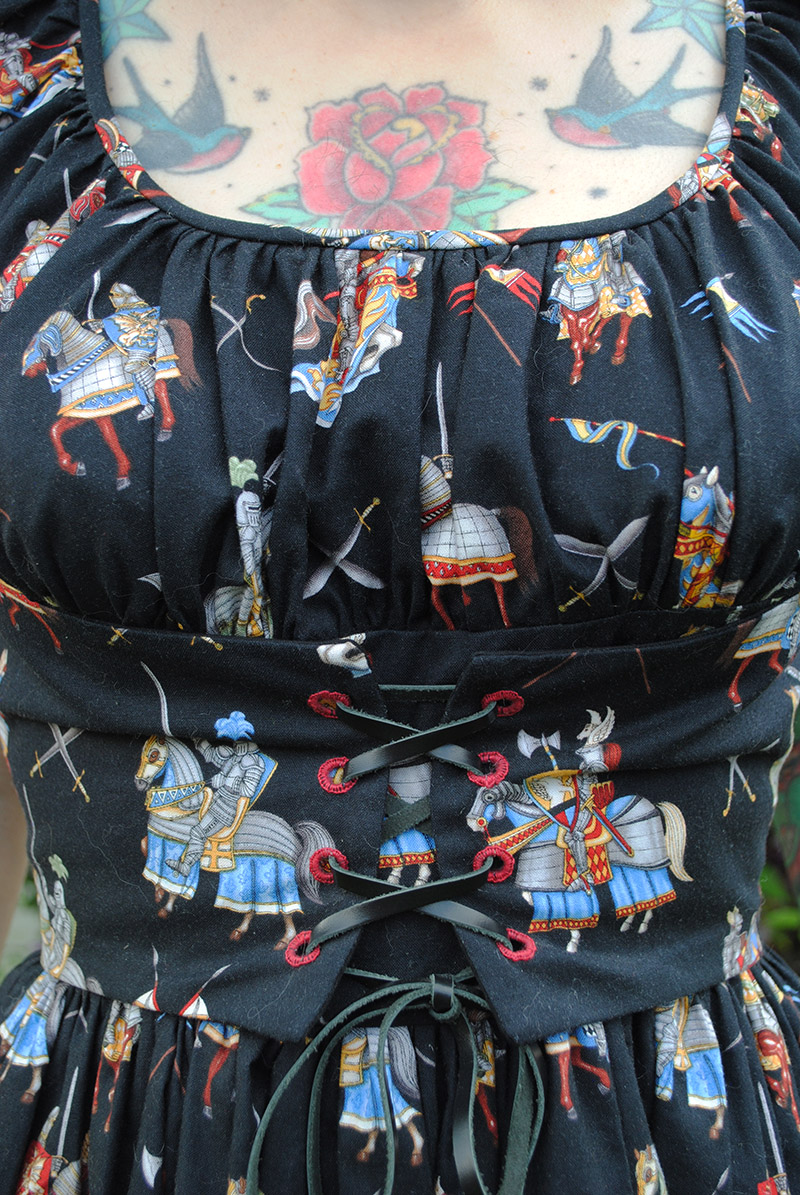 This dress has some little details that I really like, from the overlay itself and how it curves up to the armhole, to the center back lapped zipper, to the gathered neckline and sleeve caps, both bound with bias binding. I really like the final shape and neckline, and would like to sew it sometime without the overlay, too. But I’d also like to try another version with the overlay again but a less crazy print, like maybe a floral. 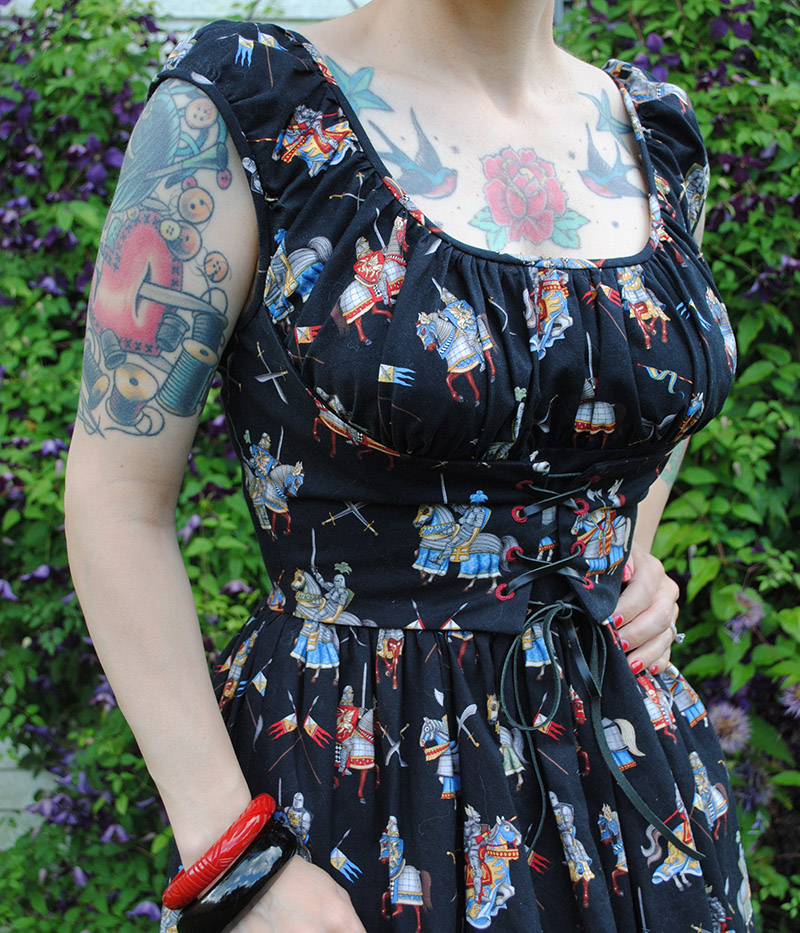 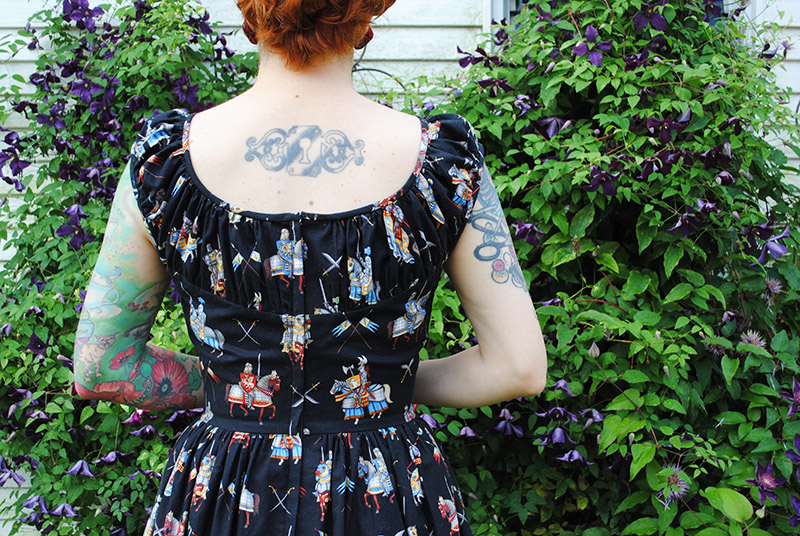 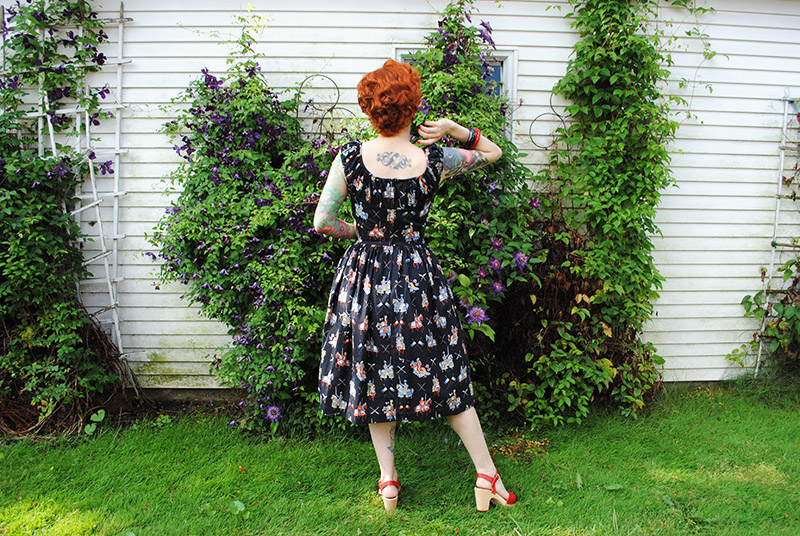 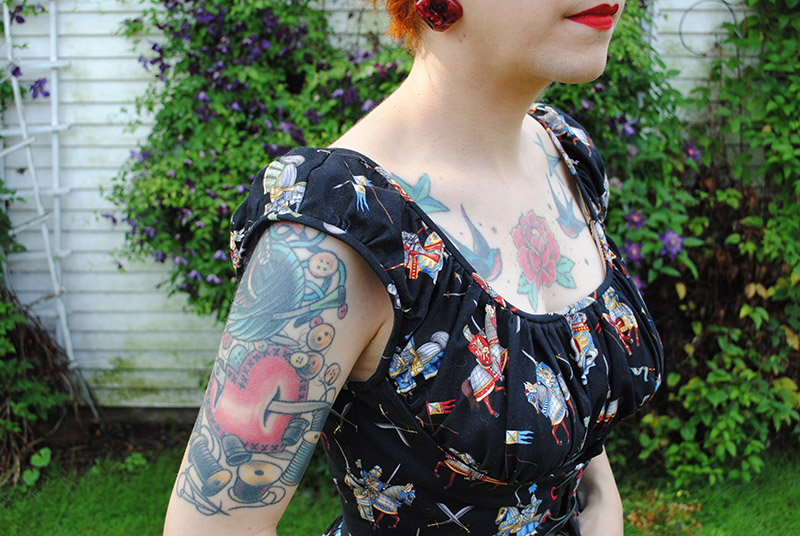 This isn’t really a dress I ever planned to wear often… in fact so far, I’ve only worn it to the faire last year and to take photos for this blog post! That’s rare for me, since I typically focus on everyday things I want to wear all the time. But sometimes you just have to have a little fun and go all silly with your sewing plans! 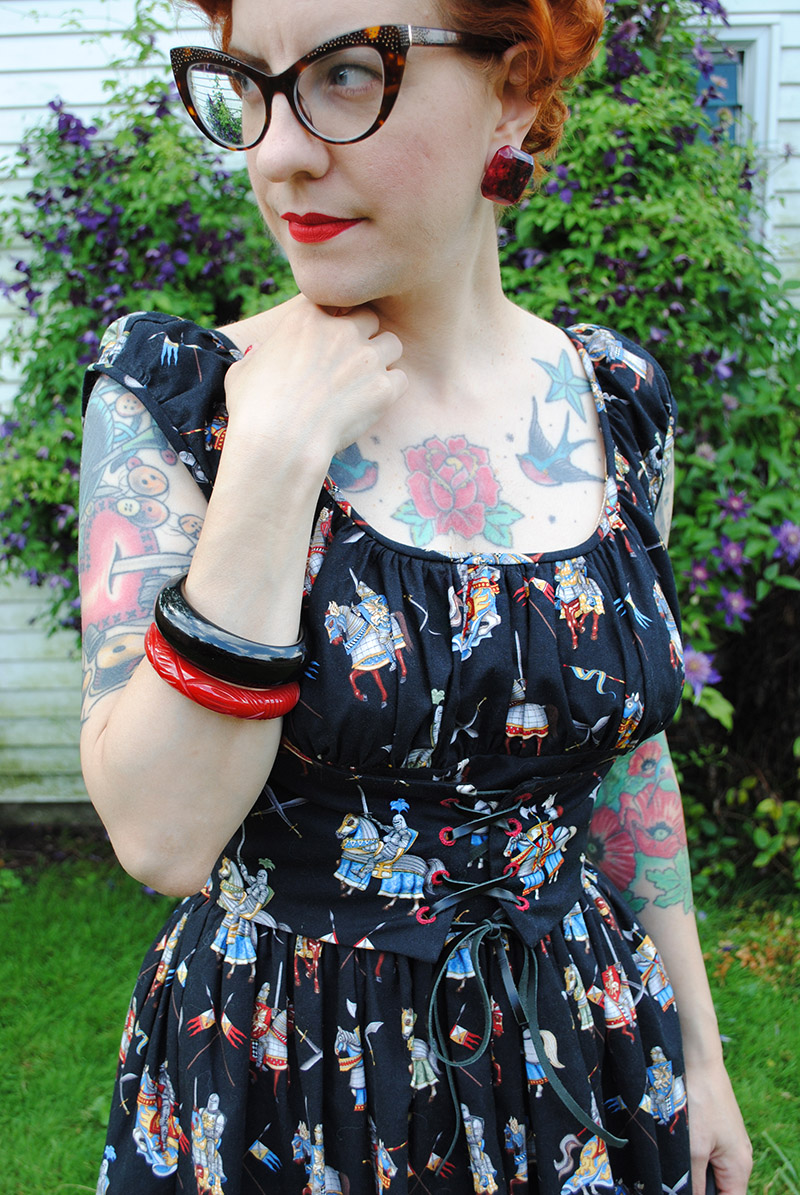 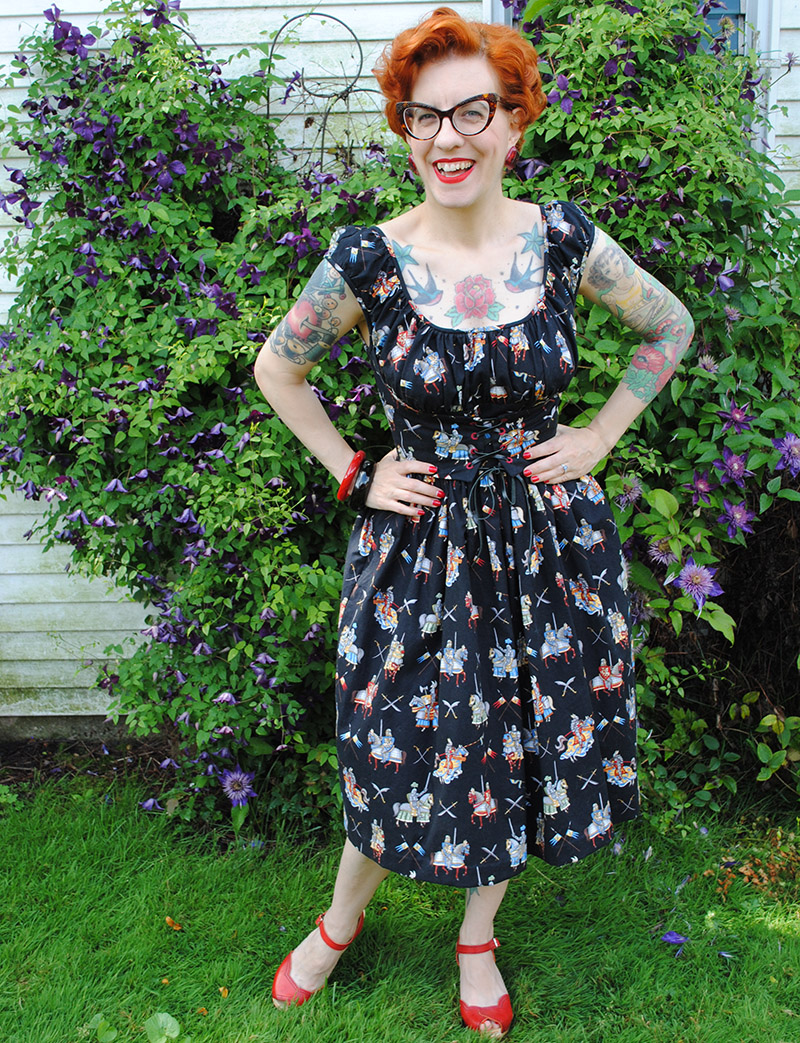 Right now though, I’m working on another pair of pants (red twill) made from my modified 50s jeans pattern (in part to help nail down my ideas for my upcoming tutorial series/sewalong) and just finished up a hooded vintage blouse that is so cute I can’t stand it! I’ve also started knitting an epic sweater project that involves intarsia and Nancy Drew. When I don’t have the time or energy for things to make it on the blog, I’m often still posting about them on Instagram, and just started using Instagram stories to show the progress of some of my projects, which has been kind of fun. Feel free to follow my adventures there!

In the meantime, as it gets towards the end of July I’m starting to think about what else I really want to squeeze in before it feels too summery. How about you??