I haven’t blogged in nearly two months and it’s almost entirely due to current world events that have been all too stupefying and depressing. I just haven’t wanted to sit around taking oodles of photos and having mundane chatter about this and that I’ve just made. It doesn’t mean I haven’t been sewing or knitting because I have! They help keep me sane. In fact I’ve finished up some projects I’m really proud of (and some boring ones, too). But inspiration has been slim. And while the political climate has not changed, at least I can tell spring is coming (huzzah!), and I have a big birthday trip planned in the next several weeks, and so I’m feeling like some of my fog is lifting and I’m ready to blab on again about things I enjoy. And so here we are. 🙂

Last fall, I blogged about how I was going to take the plunge into bra making, which was a difficult place to get to since I wear retro style bras to match my overall style and fashion preferences. Since then, I finished up Beverly Johnson’s first bra making class on Craftsy, and have watched parts of her other two more advanced classes, too. Seriously, these classes are some of the best money I’ve ever spent on something craft-related! (Looks like they’re all on sale now but periodically they have even better sales.)

Back in October, I completed my first fully-finished bra. I say fully-finished because there were two not-completed projects first. The very first was one that I started from one of the vintage patterns I bought, Sew-n-Stretch 217 fro 1969, only to discover the 32C was comically small once I had the cups in the frame, so I bailed on it right away. Even if I’d found the pattern in a D cup, I still think it would overall have been way too small.

Not to be deterred, I started on Kwik Sew 3594, which is basically the modern equivalent. I went with a 32D in that, and inserted channeling and wires unlike the pattern (which doesn’t require any pattern modification, just needed to add those steps). The frame was very comfortable, but the cups were a hair small. Plus, I personally like my bras to have a lot of lift but I went with their suggestion for where the greatest degree of stretch (DOGS) should run, which was essentially parallel to the floor, and that meant that the cups were kind of saggy, even being self-lined (two layers of nylon tricot). So even though it should theoretically have given more of a vintage kind of oval uplifted look, it just looked like a normal round bra to me. Fail.

That was the blue one below, mostly finished but never to be worn. It was made from a nylon tricot kit from Bravo Bella. But a really good learning experience and helped get my feet wet for really understanding the pieces, stretch, and overall architecture for a basic bra. 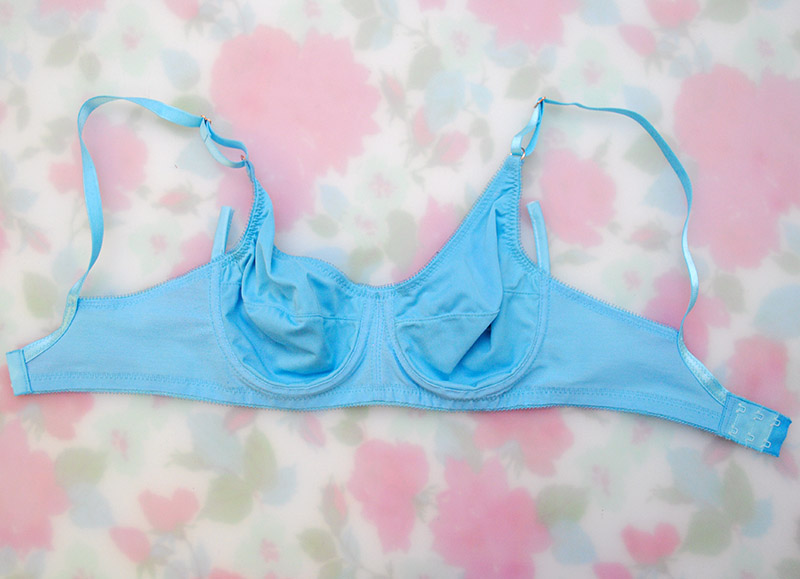 At that point, I was determined to get a bra the way I wanted it. And I was closer! But not there. The Kwik Sew pattern didn’t come in a DD cup for the 32 band, and I could have figured out a way to use the 34D and made the band smaller (so the sister size to a 32DD), but I also wasn’t sure if the cups would fit me better if I changed the direction of the stretch, and I suspected the DD might be too big.

But then I had a brainstorm. I’m after a really specific look, amd I get that really specific look out of one of my favorite bras that’s also pretty inexpensive: Bali Flower. What if I just bought a new bra (so that it wasn’t stretched out already from wearing it), and disassembled it? Kind of crazy, but for $20, it was the price of many indie bra patterns, to get more-or-less exactly what I wanted. So that’s what I did! I couldn’t quite decide on a C or D since I’d been waffling between those two sizes in my bra drawer anyway, so I went with the D figuring I could remove some excess in the future if I needed to.

It was actually kind of fun and since I never planned to put the bra back together again, I made it easier on myself by drawing on it as I went. Here’s what the cups looked like once I unpicked half the bra. You can also see the important direction of the stretch, which is vertical, not horizontal. These are seriously stable cups (the white fabric is fused to the sheer fabric) and I now know to make mine the same way. 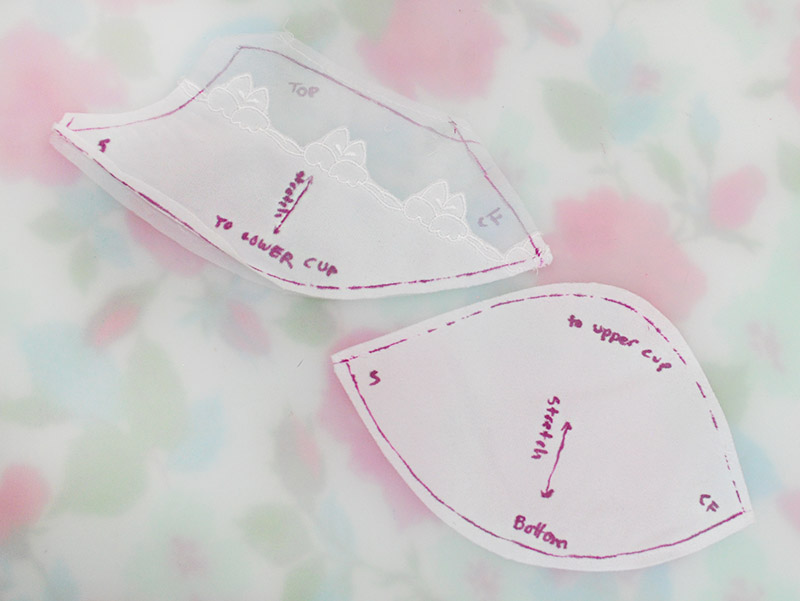 Initially, I planned to trace off the Bali Flower band but once I started looking at it, I realized you know… I don’t love the band! I love the cups, but the band is wider than I really need (4 hooks for the D cup and the bra has so much lift on its own, it’s overkill), and I prefer the U-back style. So I did Crazy Thing #2, which was slap the Bali Flower cups onto the Kwik Sew band. Well, and technically I changed the upper cup not to be straight across like the Bali Flower, but with tapered self-straps that fold over a ring like the Kwik Sew pattern, to keep things simple in the beginning.

And it worked! It all went together well and the fit was pretty much just what I wanted (a bit to tweak over time still). My first finished bra was this orange and black one, which I made right in time for Halloween… a good while ago by now, obviously. 😉 The orange power net and Duoplex for the cups and frame also came from Bravo Bella. 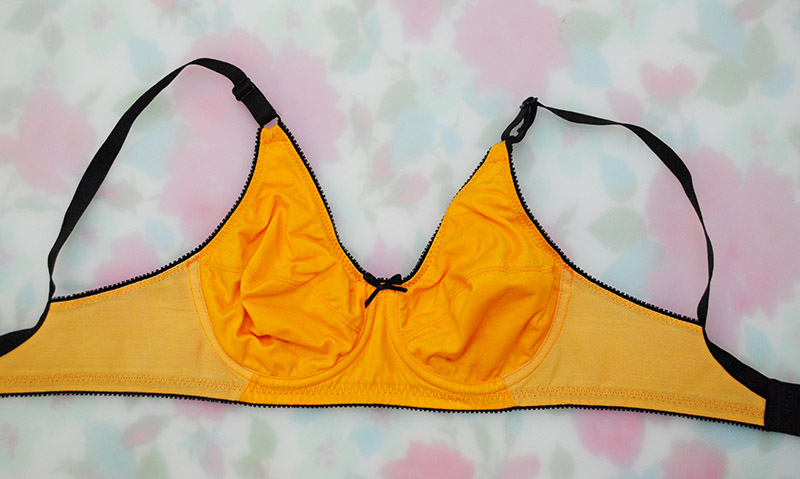 I made a couple of alterations to the frame, making sure it would fit with the new cups, and removing the center front frame seam. I also put a seam in the frame because the Kwik Sew pattern has the entire frame/band as one piece of power net, whereas most bra patterns I’ve learned have the frame in a more stable fabric, so I made a little angled seam under the cup. (Now that I think about it, I wonder if a stretchy frame could also have somehow affected the fit of the cups in my blue tester Kwik Sew bra.)

I actually got the idea for the seam placement from the Bali Flower RTW bra. 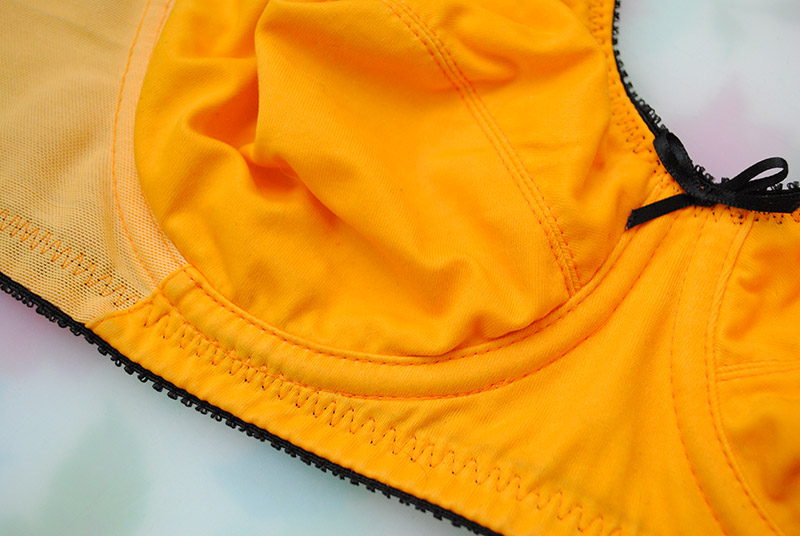 And I have worn the hell out of that bra! Right after making it, I got all excited about making others and bought a bunch of supplies, but somehow just never got around to it. That is, until I had a cold last week and wanted a small and fussy little project to take my mind off things, once I started to feel good enough to work on something.

Before I sewed it, I made a couple of small tweaks: I lowered the height of the upper cup ‘strap’ at the top and tapered it a bit because I made it a bit tough to get into a 5/8″ ring let along a 1/2″ ring. I also moved the frame seam to the side of my body, meaning the power net portion of the band was smaller. To compensate for less stretchiness, I added 1/4″ to the width of the band.

Now, filed in the category of weird shit I never thought I’d be doing: stuffing a bra on my dress form. It’s kind of creepy, because it’s your own bra, so it’s your real boob size, but it’s on your dress form and… yeah, it’s just weird. Sorry if these look a little lumpy, it was the best I could do with polyfill! 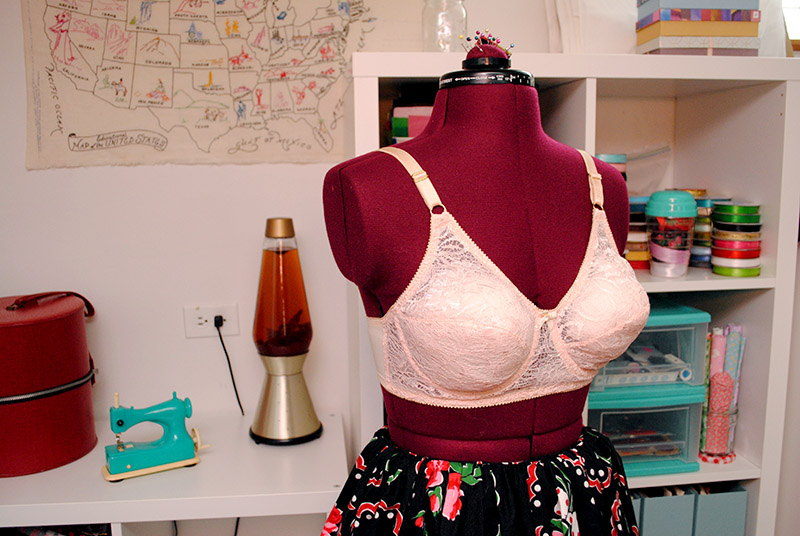 (Glimpses of my very-much-in-progress basement studio space back there… the bones have been in place nearly a year and are wonderful but I need to focus on decorating and organizing my stuff still.) 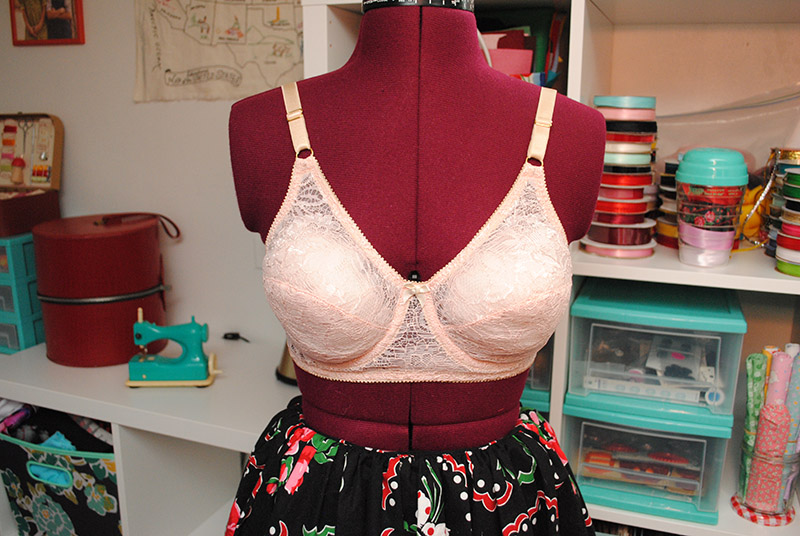 This bra proved itself to be really hard to photograph, but I’m in love with it through and through. The cups and frame are underlined with sheer nylon mesh, and I used another layer to line the cups, too. The fact that you can sew together the cups and the lining through the cross cup seam, enclosing the seam allowances feels like such a great piece of sewing trickery!

I could probably have trimmed down the seam allowances a bit further, but I’d literally never worked with lace before and didn’t want to risk it fraying, even enclosed and topstitched as it is. (I throw my bras in a lingerie bag in the washer. Shhhh don’t tell.) 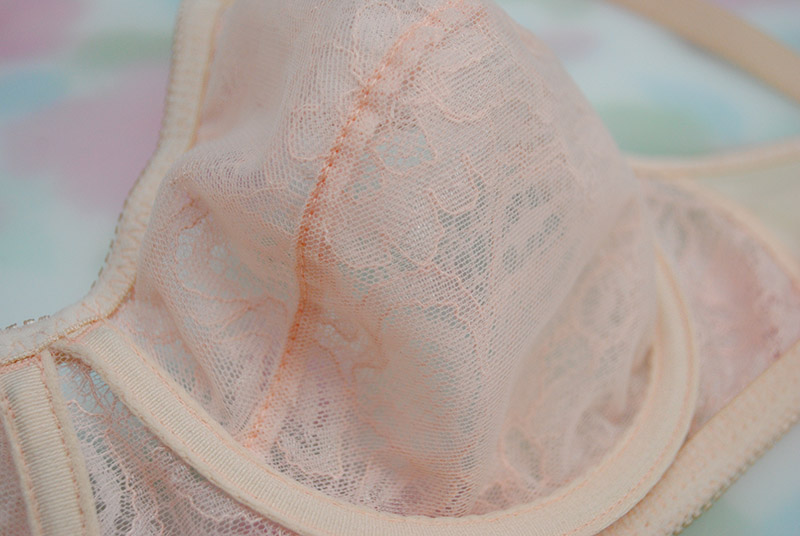 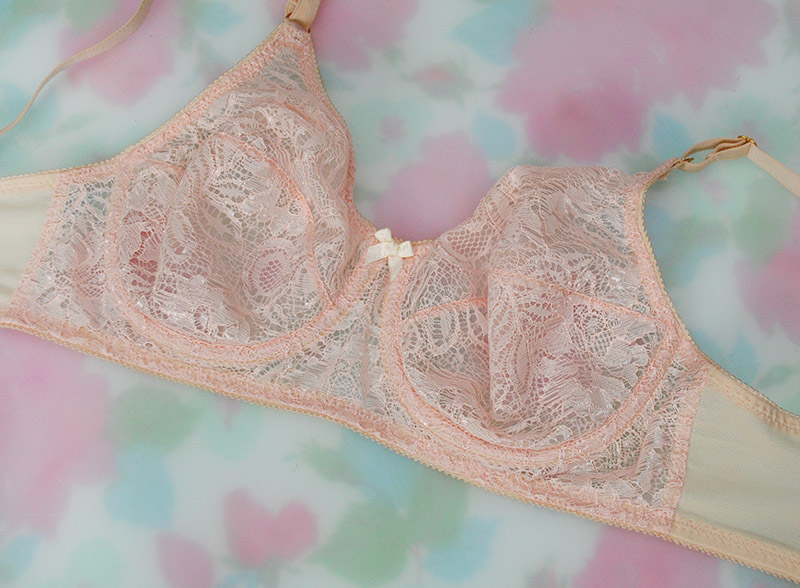 I love how simple and elegant the gold rings and sliders look. All the supplies for this one was from a kit from Emerald Studio. I just adore how it all looks together. 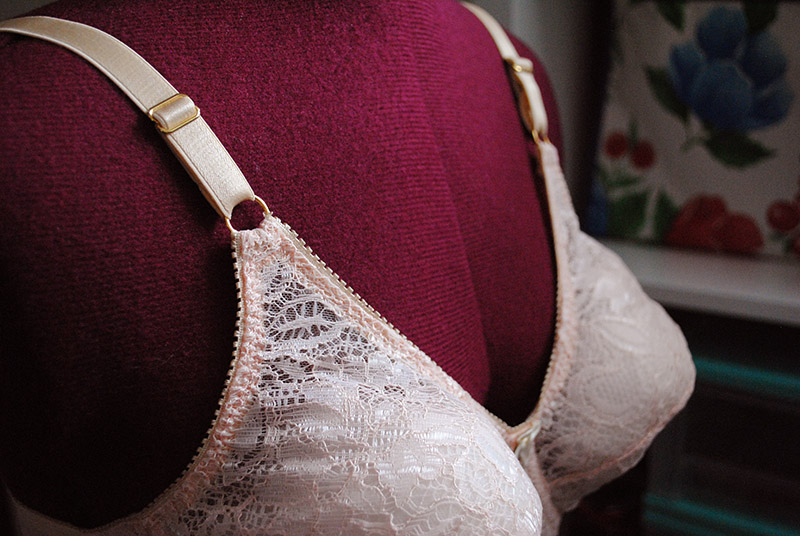 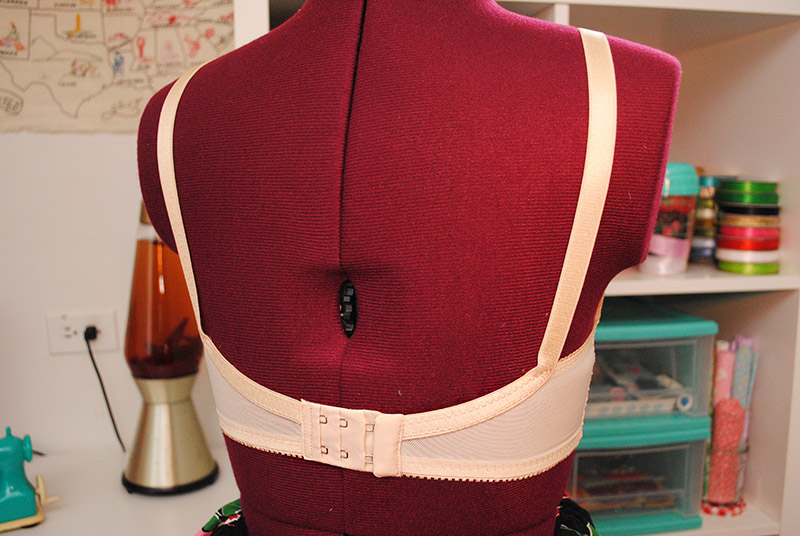 It sounds funny, but looking at these photos gives me such pleasure! It’s deceptively easy to sew a bra, and it ends up looking really professional. And even if a couple of things end up imperfect (my three step zig zag went a little wonky on one of the armhole sides), no one ever sees it. 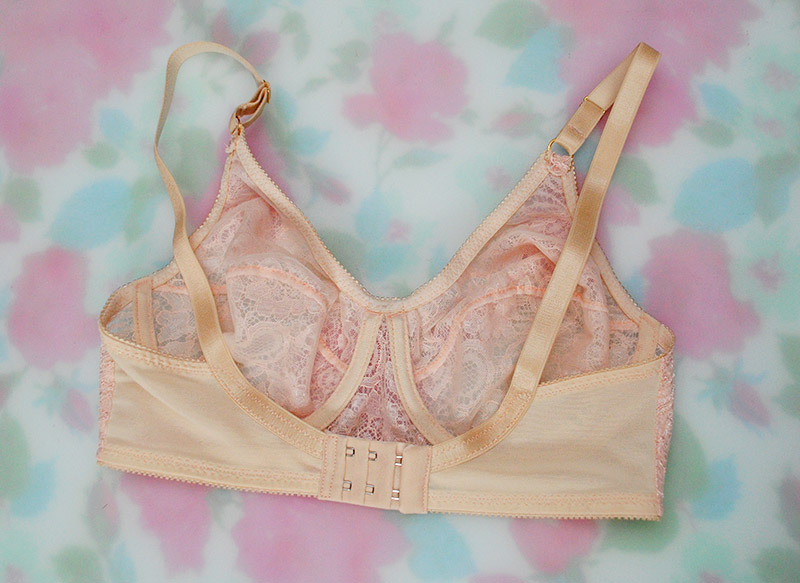 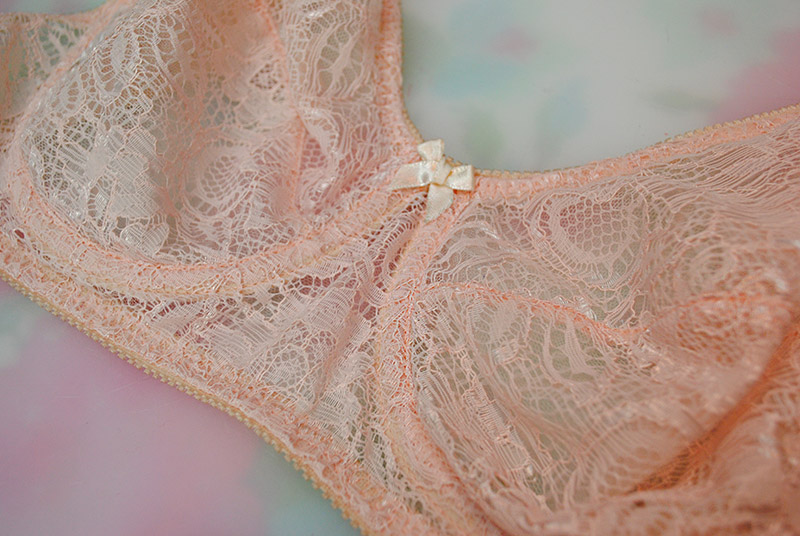 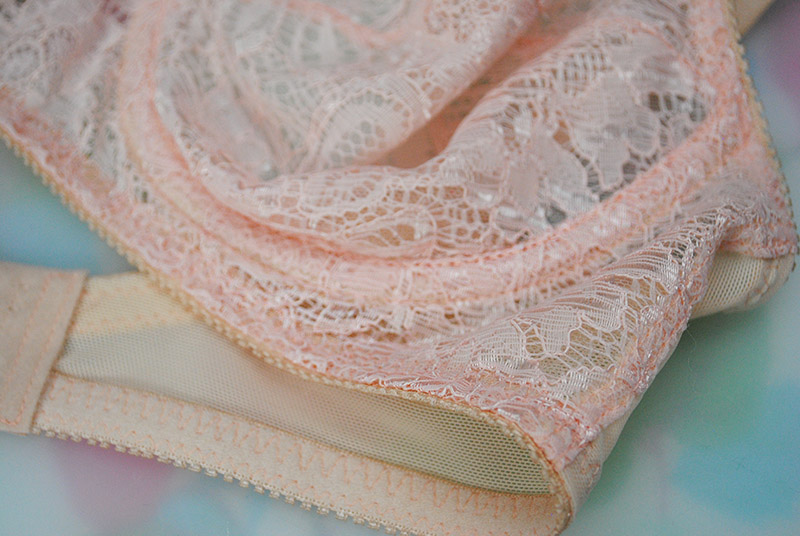 Below is a comparison of my blush lace bra to one of my Bali Flower bras. It’s worth mentioning the RTW bra (on the bottom) is pretty well worn at this point so the band has stretched out a bit I assume, but you can see how much wider it is! The band on my version is so much more comfortable and just feels like I’m wearing less in the back… which I am! 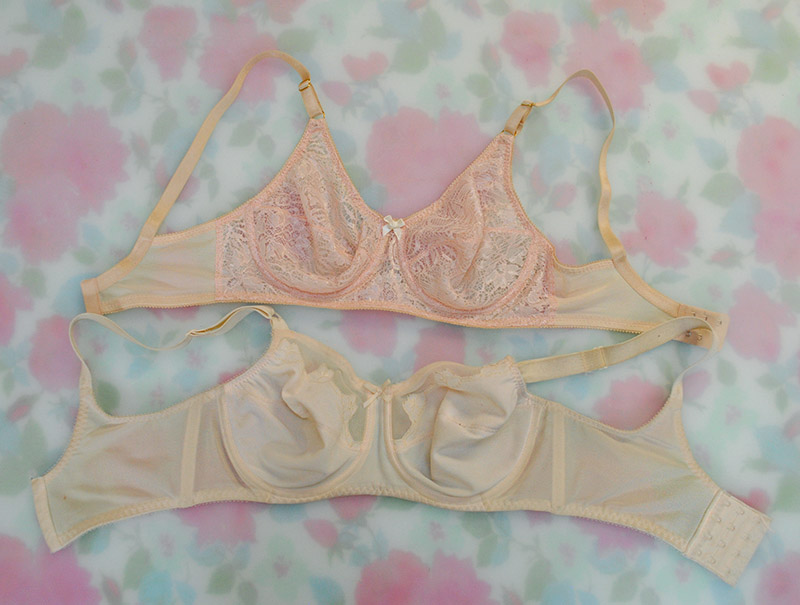 Now how’s the fit? Well, I’m not going to model it so you’ll have to take my word for it. I’d say, pretty damn good. I’ll likely shorten the frame and band a little bit on the bottom, because through the course of the day, it can get a little bunched. I don’t notice it while wearing it, and it does it more on the lace version than the orange one since I used a narrower elastic for the band (1/2″ vs. 5/8″) and the channeling doesn’t overlap the band elastic.

And the cups are good, although it’s possible I have a tiny bit of excess fabric in the lower cup. I’ll have to suss this out over time and future versions, because I used a different underwire style in the lace bra versus the orange bra and that changed the fit slightly (for the better). 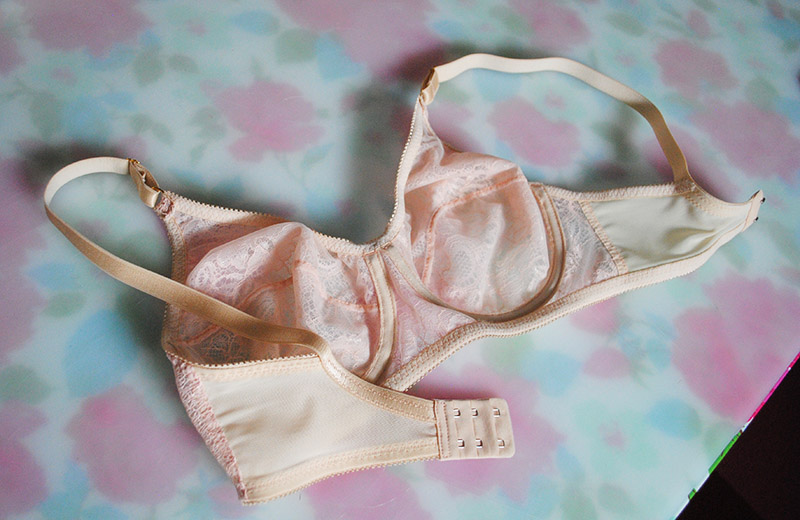 All in all I couldn’t be more pleased with my first adventures into bra making. I can finally, finally make retro styled bras in any fabric or color combination that I want! And now that I’ve learned in one of Beverly’s classes that you can modify an existing pattern to have a horizontal seam across the cup (which theoretically should give my preferred shape), I may try a couple of the lovely looking modern patterns and try to modify them. We’ll see. Even if I only ever churn out variations of this bra and play with tweaks to it, I will be a very happy person indeed.

I can’t wait to make more! 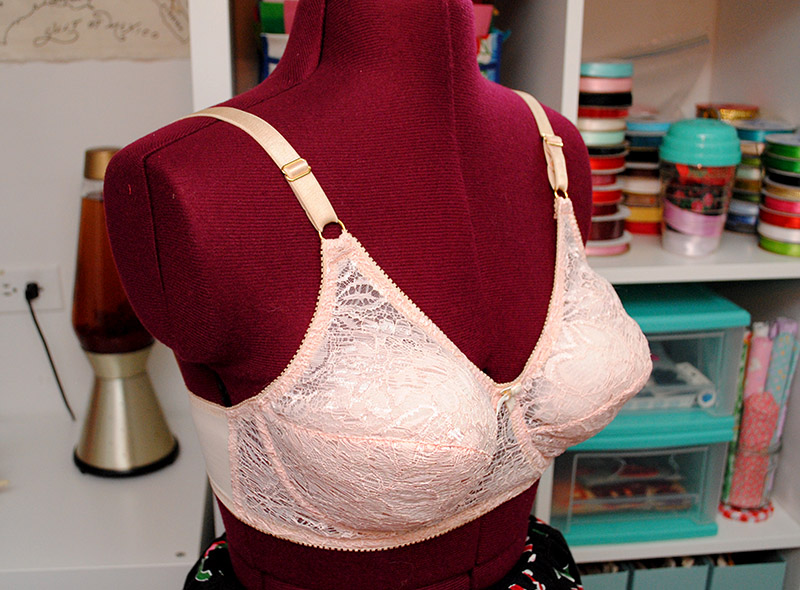