It’s a Friday confession, my friends. Pull up a chair and a beverage!

I’ve never wanted to sew lingerie. A slip yes (not that I’ve ever bothered getting to it). But bras and panties, nope. (Incidentally: I cannot stand the term “panties”, I call them underwear whenever possible.) In fact, I have to be honest and say that most of the bra making posts and photos I see online have kind of annoyed me. Here’s why.

I wear one style of bra. It’s a retro style, popular from the 1940s through the 1960s, but still exists now in limited fashion. Ironically five years ago next month, I did a post on bras and a 1940s bust silhouette, which is actually still one of the top posts on my blog. I’ve moved onto more mid-century style clothing, but the bra shape I wear is exactly the same. A cone-shaped bra with a mostly-horizontal cross-cup seam is the ticket for me. (There are probably some technical details to describe this style that I don’t know, by the way.) It’s comfortable with or without an underwire, and gives me the flattering shape I want under vintage clothing without being a bullet bra (just too pointy, and I can’t fill them out right without pads, which I don’t want). This style has no foam nor padding, the bra shape doing all the work for me to get my girls in the right position. It’s my unicorn of bra shapes! It’s great under vintage and retro clothing, and particularly great for those with short torsos and relatively large cup sizes, as it gives kind of the effect of lengthening your torso because it lifts the breasts up a bit more.

My two favorites in ready-to-wear are the What Katie Did cone bra, and the Bali Flower bra. Both are great, but colors are limited. the WKD bra comes in peach and black satin, two lovely options. And the Bali Flower comes in white, beige, or if you’re a larger band size (I’m not), black. Sure, I could probably try my hand dyeing one of them, but that still doesn’t give me any options for more fun fabric choices and personalization.

Anyway, as you can probably start to see… there is nothing about modern bra-making posts that’s left me feeling there was anything there for me! Traditional modern style bras are easy to find and people are sewing them up like gangbusters… think Pin-Up Girls Classic Bra, Marlborough, Boylston, etc. But I don’t wear bras like that. I just simply don’t. So sewing one holds no appeal. And trying to figure out how to re-architect one to change the placement of the seam when I don’t even know anything about bra-making always seemed like asking for trouble. There are a few bralette patterns out there that have a similar shape to the style of bra I wear, but I really need and want a proper full-on bra with all the standard trimmings, and again, didn’t want to try an reinvent the wheel trying to turn one thing into something else.

And so, the world of bra making left me feeling cold. I admit. If I’m fully honest, cold and kind of envious at all those pretty bras that I knew I still could never have.

And then, one day recently I randomly thought to myself, why not look for a vintage bra pattern! (Well, technically my first thought was “maybe I could take apart one of my bras and draft a pattern from it”, before I moved onto the much less annoying “maybe there’s a vintage pattern for this” thought.) I mean, there’s vintage patterns for damn near everything, why wouldn’t there be ones for bras? And why had that never occurred to me before?! 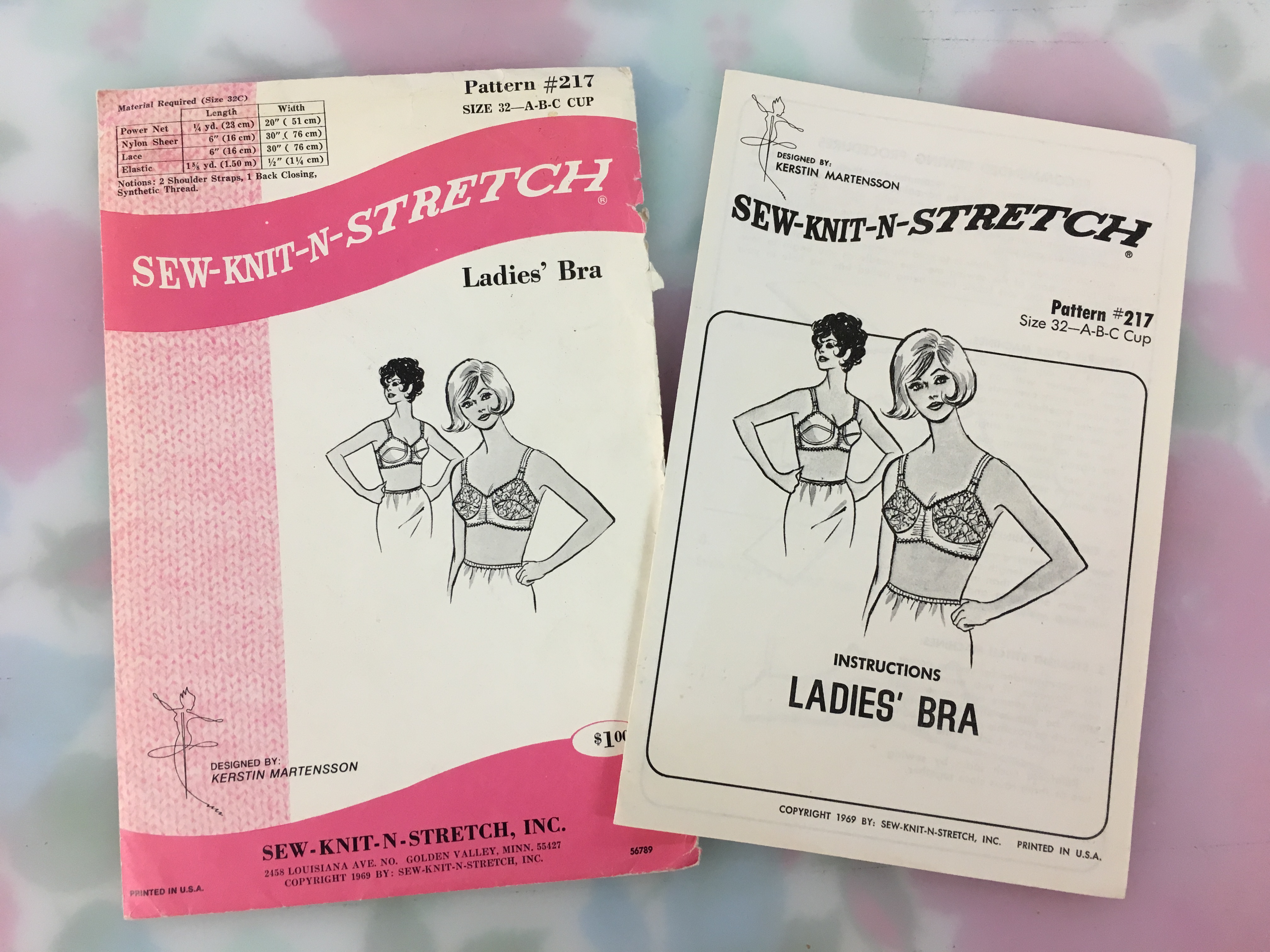 That there my friends, that’s me. That’s my bra. It’s a pattern for a cone shaped bra!! 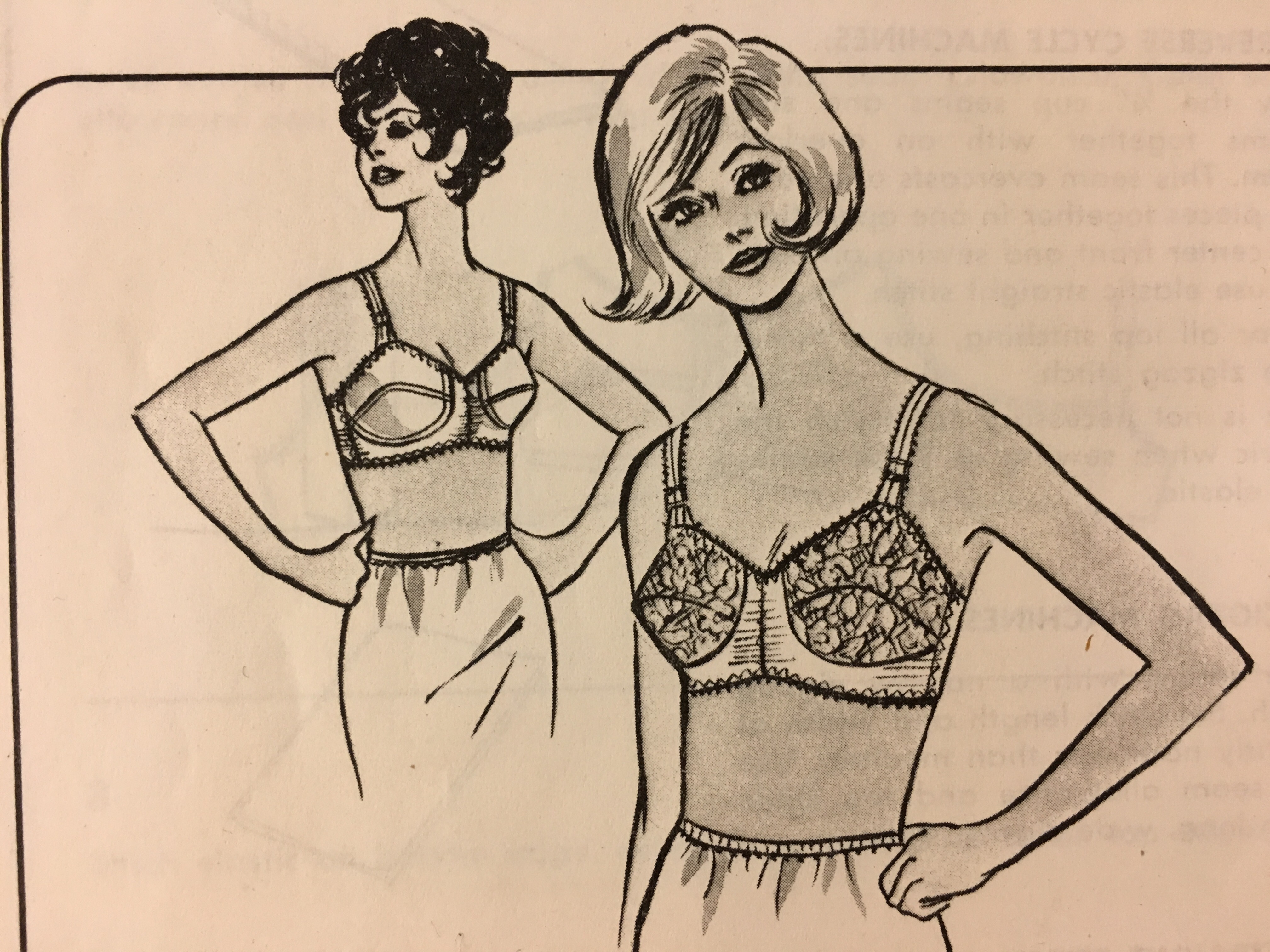 I first picked up Sew-n-Stretch 217 on Etsy, it’s a pattern from 1969. It comes in different sizes and I managed to find what I thought was my size. I’ve been wearing a 32C lately but have always hovered on the edge of 32D which I used to wear, so it’s possible this one may not fit me. But it’s okay, because then I found Kwik Sew 1017, from the 1980s, and that one has both sizes and many more. Designer Kerstin Martensson (read more about her here) founded Sew-n-Stretch in 1967 and then later changed the name to Kwik Sew Pattern Company. Her name is on both patterns. 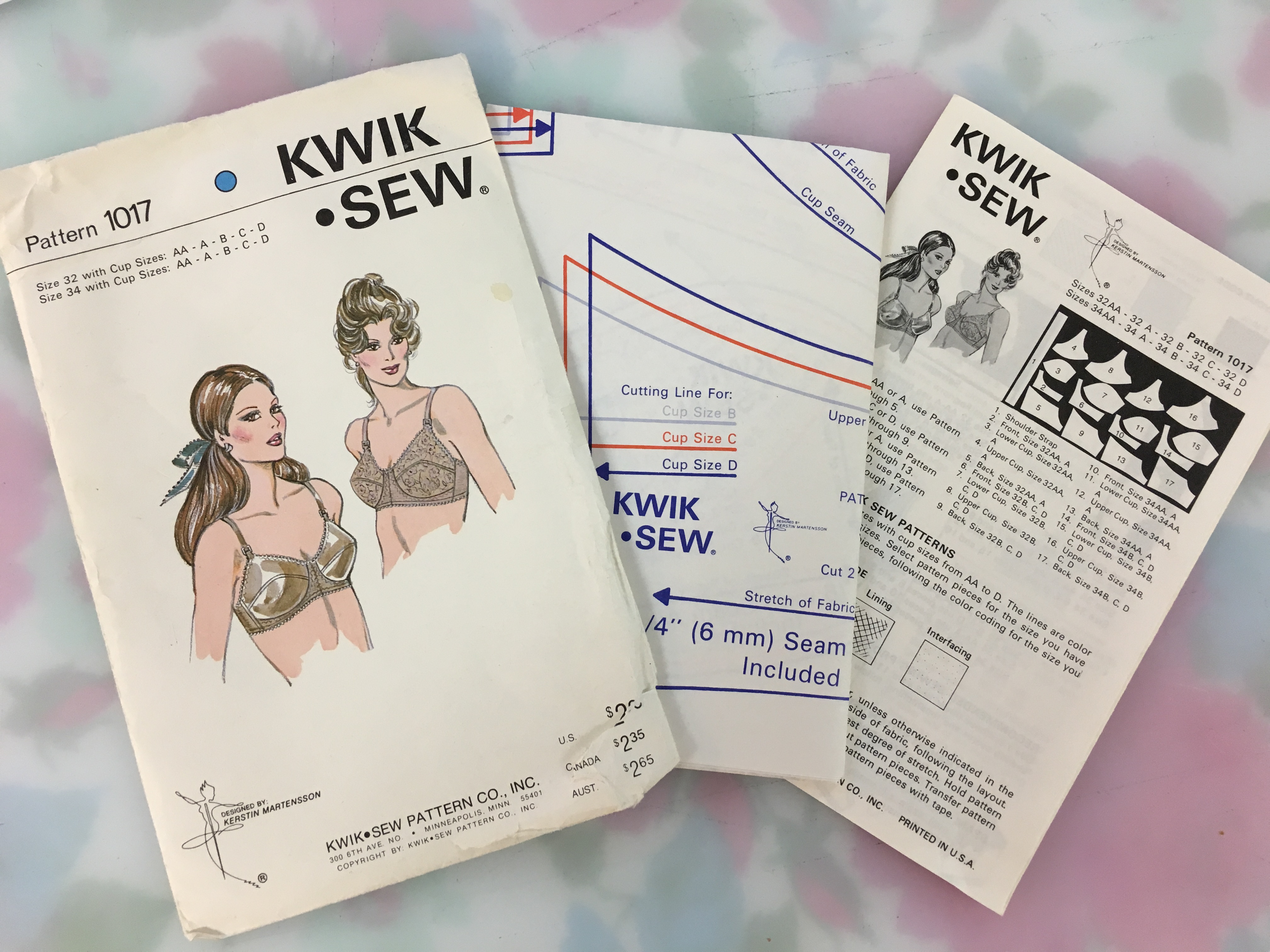 It’s basically the same bra, although I was in a stupor of newfound excitement when I ordered them, and thought they were slightly different. I haven’t pulled out the pieces yet to examine them but when I compare them I wouldn’t be surprised if they’re literally exactly the same, although the line art of the 1969 pattern looks like the bottom of the frame (the part under the cups) is a bit wider. It’s worth nothing the instructions on the 1969 pattern are much lighter than the one on the 1980s pattern, as you might expect.

But it gets better, especially if you happen to be in a similar boat, but don’t want to try to hunt down your size packet in one of these vintage patterns (or want a cheaper version!). When I started researching, I laughed at my own stupidity in not trying to figure this all out sooner, because it turns out there’s also a modern Kwik Sew version of this pattern, K3594. I don’t have that one but unless they changed something, it looks pretty much the same as these other two! I’d just have bought this one if I’d seen it originally. 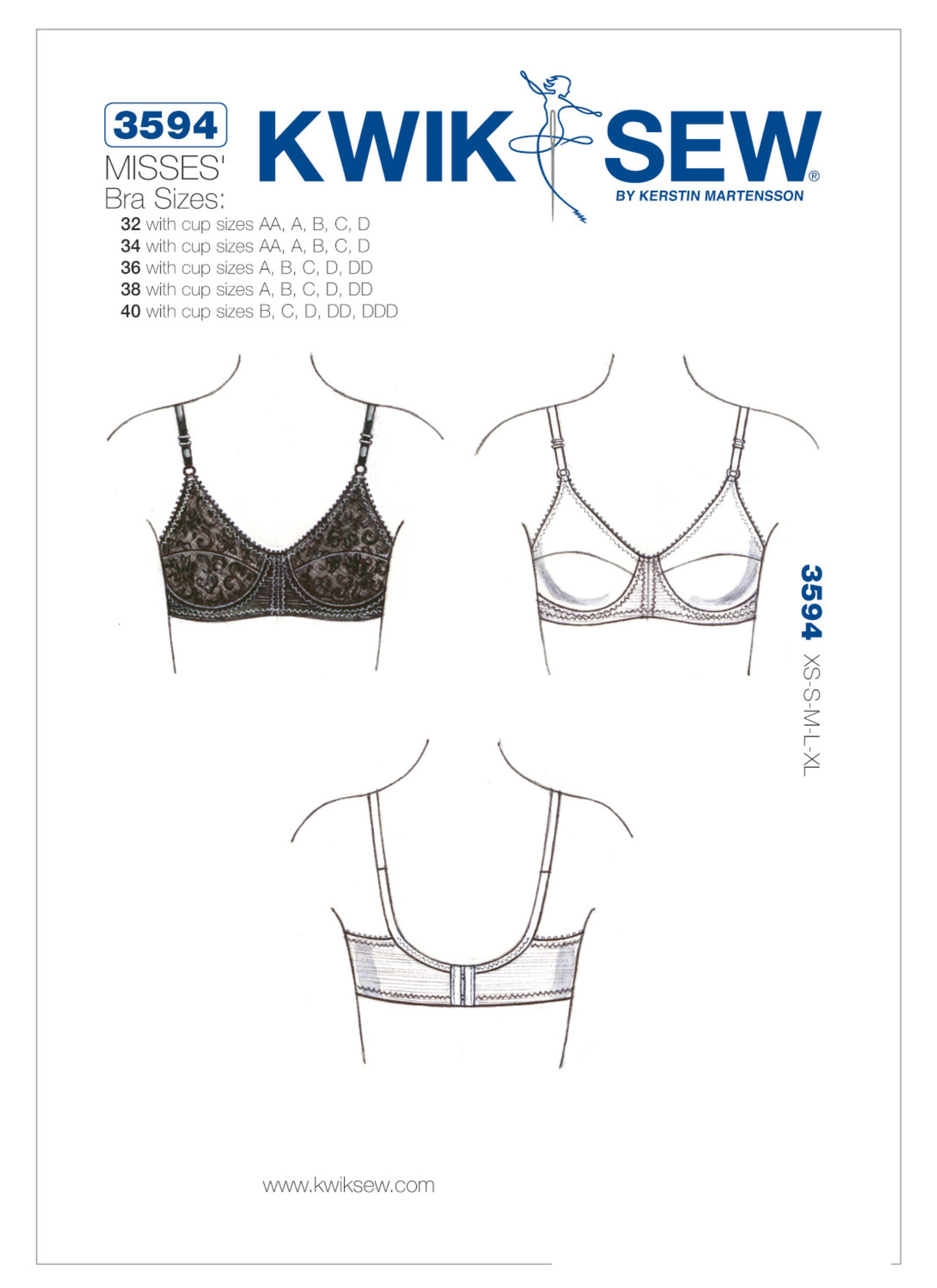 And, y’know, people have actually made this! But in part because most people don’t show their bras modeled on their own body, I might never have actually put two-and-two together if I saw one of those Kwik Sew bras laying flat in photos (plus, it’s a much smaller percentage of people who have made and shown off that pattern vs. most of the others I’m used to seeing on social media and blogs). So it was a roundabout way to get there, but oh man, am I glad I ever did!!

So, where do I go from here? I’m taking the Craftsy class “Sewing Bras: Construction and Fit” which has been fantastic so far. While the instructor of the class, Beverly Johnson (owner of Bra Makers Supplies) doesn’t cover the style of bra I plan to make, I’m learning a lot about construction and she’s getting me to feel more comfortable with the concepts of bra making and fitting, so it’s been great. I actually think she might cover a lace version of the modern Kwik Sew pattern in one of her more advanced classes on lace and foam, but it looks like it’s 75% foam and a lot less about lace, so I may wait and try to pick that class up next time there’s a big sale. I have some supplies coming in the mail, and in the meantime I’ve also been making note of tips and tutorials that I can apply, once I get sewing.

Anyway, there you have it. Consider my eyes finally open to bra making, now that I found a bra pattern that actually speaks to my style.