What’s blue and tan with birdcages all over? My blouse! 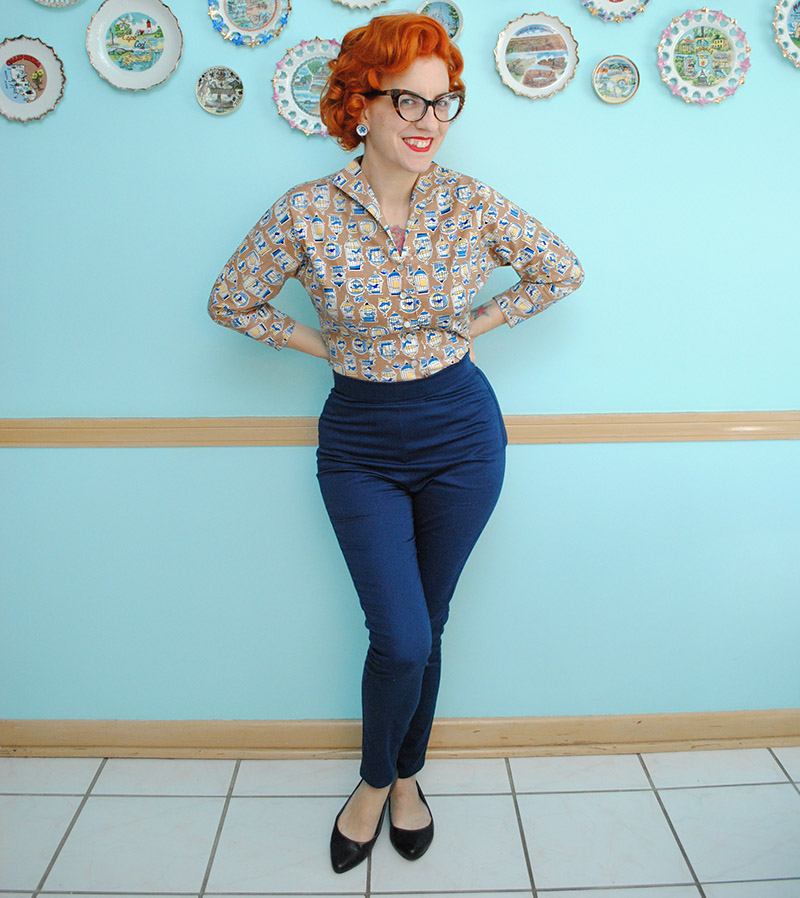 And it’s another Vintage Pledge item! Sometimes, I really love the terms used to describe various elements of a garment in vintage sewing patterns. Today’s treat was Butterick 6223, a pattern from the 1950s, featuring a “small rising collar” for the view I sewed. 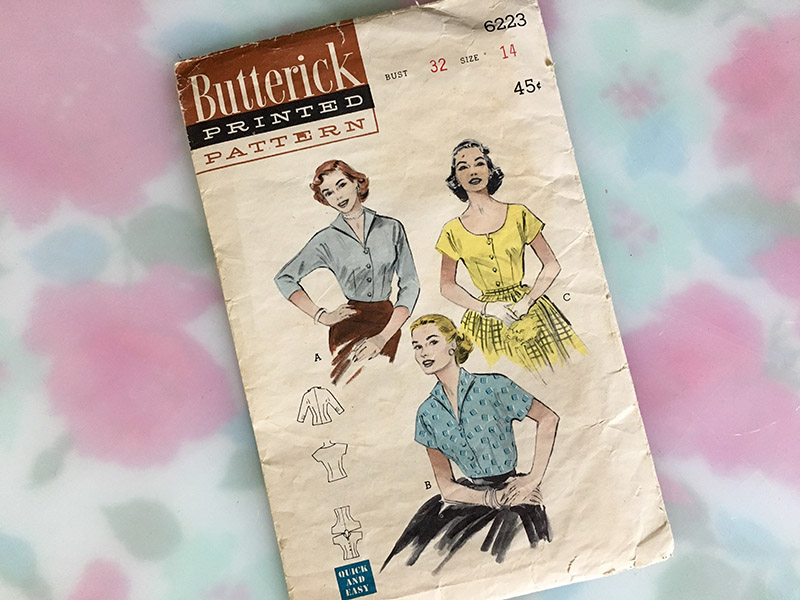 It’s a perfect description—says exactly what it is! 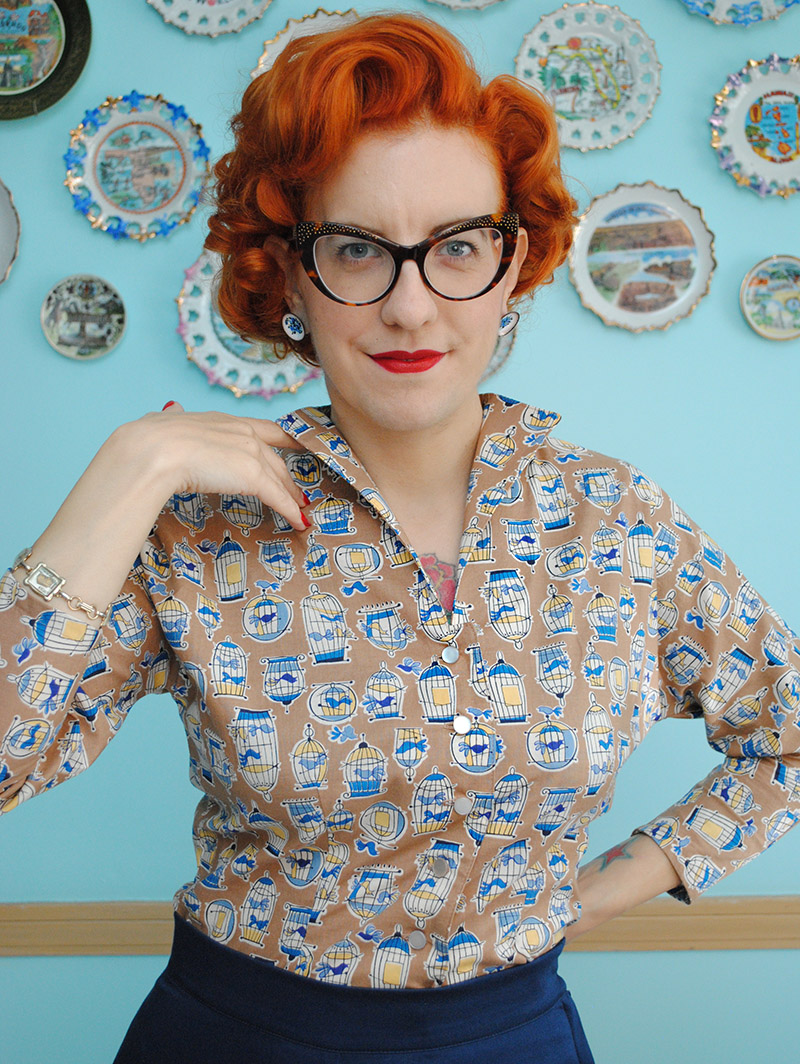 This is actually a blouse I’ve sewn up twice before, last fall. Before we went to London and Paris last October, I sewed a wearable muslin of it, intending to then make a final version to wear on Halloween, when meeting up with some of my favorite sewing pals. Recognize these two?? 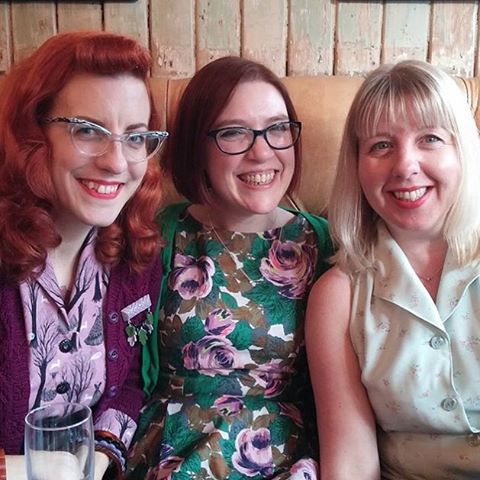 I don’t think I ever posted photos from out trip, but I did make the Halloween blouse in time, and I’m wearing it in the photo above, with Roisin and Jane! ♥ ♥

I wanted more versions of that blouse since making it up, as I’ve worn the first version quite a lot in spring and fall (it’s a cute umbrella print) and just pulled out the Halloweeny one for this season (it’s the lilac Haunted Forest print from Cotton + Steel). However, when I approached the pattern recently, I remembered an issue I had with the first two: the upper back was kind of weirdly blousy. I worked on it a bit after my first version, tweaking the pattern slightly for the Halloween version which helped, but didn’t resolve it.

But this go around, I knew something I didn’t know last fall: that I’d hit on the secret to this issue when sewing up my checked dress earlier in the year. The puffy back was a result of the bodice being too long! And to test if this worked on the blouse too, I pinned about a 1.5″ fold at the waistline of the blouse, tried it back on, and was treated with a much better upper back. So I transferred that to the pattern before sewing up this version, and that issue is now solved. Huzzah! My theory continues to pay off! 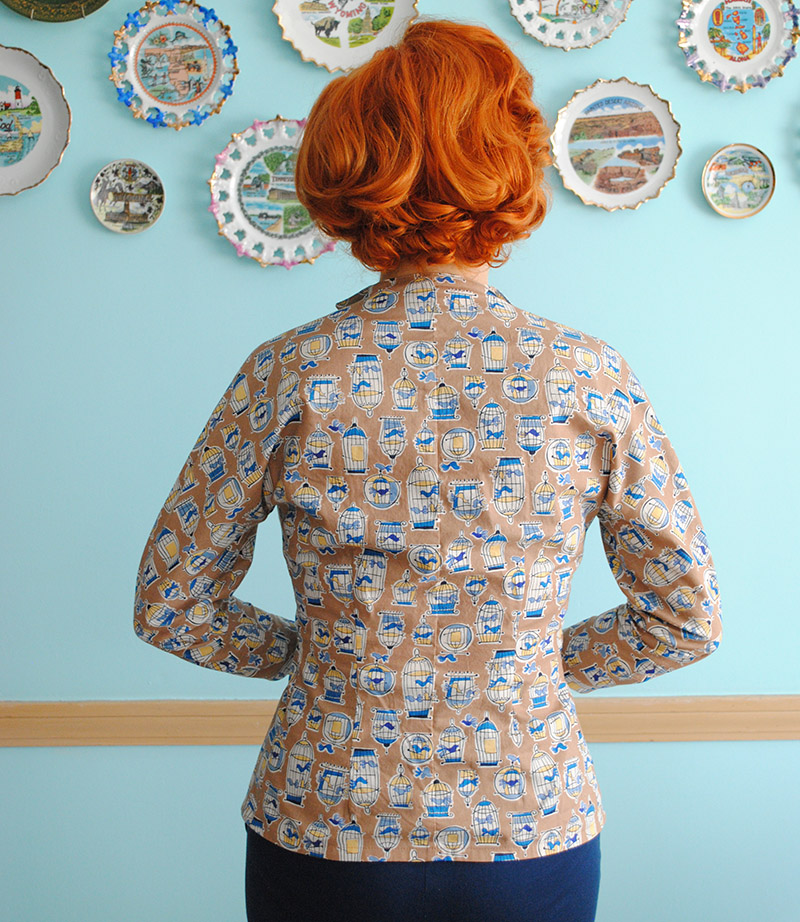 There’s a center back seam to this pattern, otherwise with the three-quarter cut-on sleeves you can’t fit it on 45″ of fabric (and certainly not the more typically 36″ wide common when this pattern was made). It’s not 100% but I did do a pretty good job matching up the seam! But it was kind of a yardage-eater to do so, so likely I’ll go back to not giving a flying fig about it next time.

The fabric is a cute birdcage print by Japanese manufacturer Lecien that I’ve had stashed awhile. It’s a weight that’s just a bit lighter than quilting cotton to me. The two previous versions I made with quilting cotton and since the bodice is fitted and not too fussy, it works nicely and it’s not uncomfortable at all, and a nice way to showcase a silly novelty print. You can’t see it, but there are 3 elbow darts on the sleeves, which is the only thing I need to change going forward as they’re a tad too low on me. I narrowed the sleeves a bit, which I may or may not do next time, depending on what I feel like. 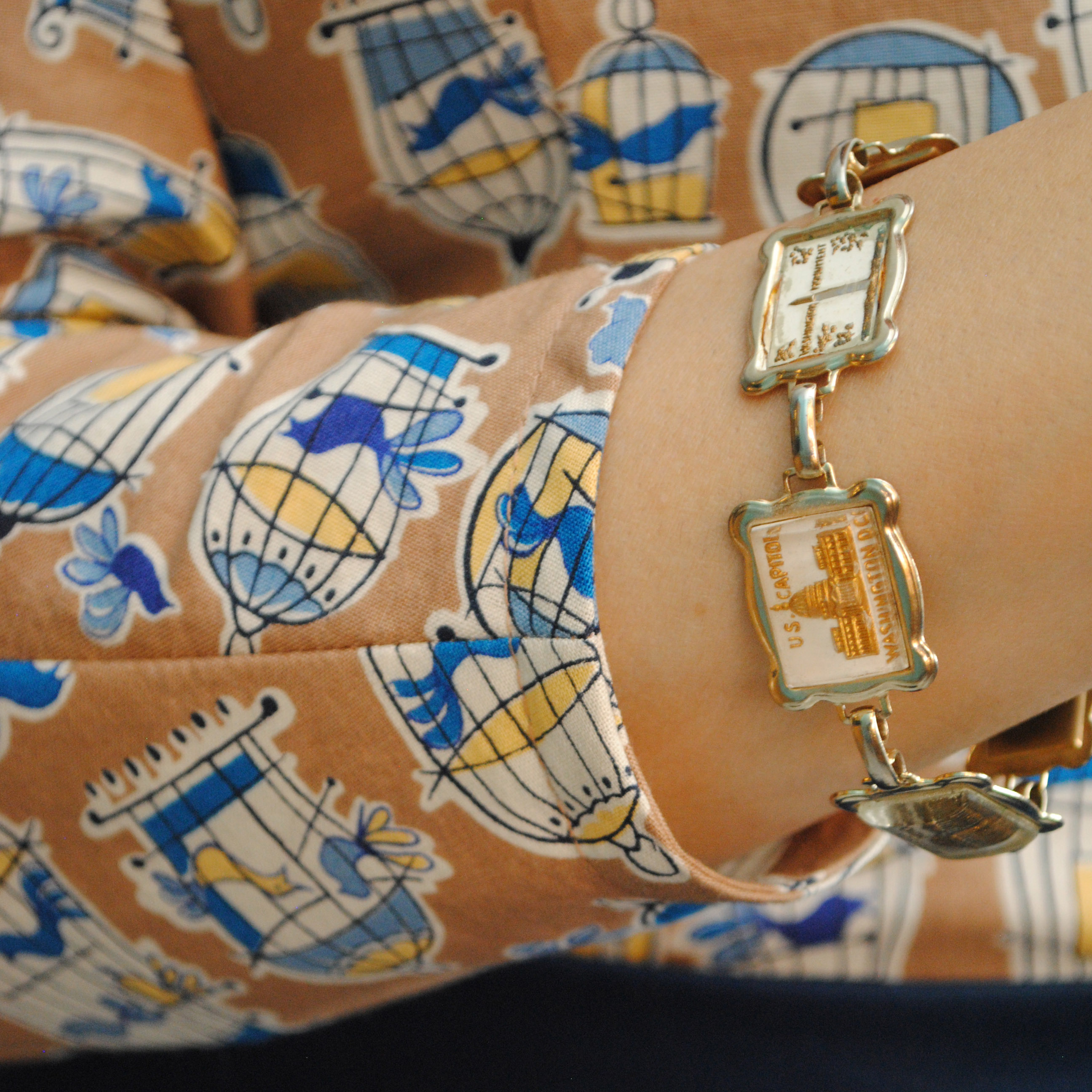 I just can’t get enough of this collar though. It’s really simple to make, unlike wing collars. I interfaced the facing with lightweight fusible (this one’s my favorite), which gives just the right amount of crispness. It really does just stand up slightly perky. I love it!

That being said I totally want to make the scoop neck view of this pattern, too. I have two vintage blouses with that shape and love them (actually both have appeared on my blog—a black velvet one and a cotton print one). Although the cotton one is too wide for my shoulders really, so I can make a better fitting version! 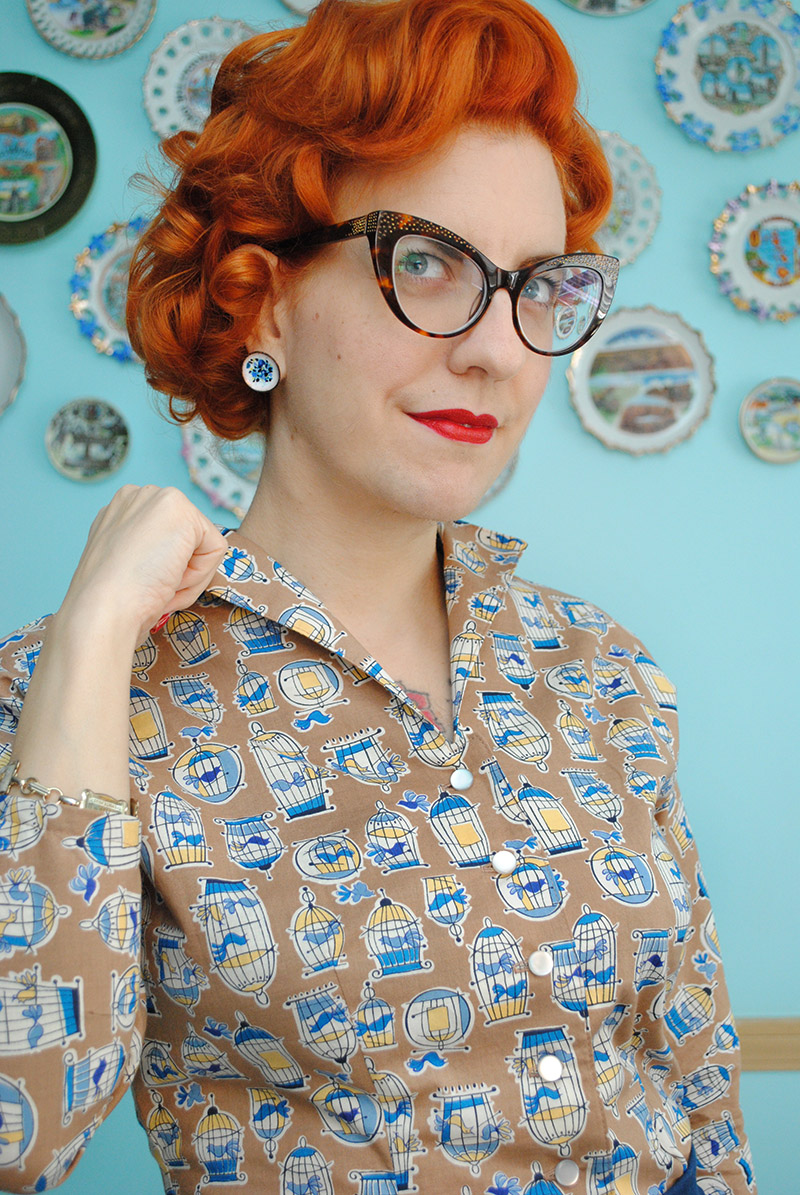 I’m wearing this blouse with a pair of cigarette pants that was a bit of an experiment, but a very successful one. I’m always trying to chase the perfect fitting leg on my cigarette pants. Not too many wrinkles under my butt or anywhere else, comfortable, but fairly fitted. But it’s kind of an elusive fit, because each fabric is different and I don’t always want the same fit, anyway! In winter I want more room so I can fit tights or long underwear underneath without feeling strangled, in summer I sometimes want more fitted, but sometimes not so much because it’s really hot… you get the picture.

But this pair, my experiment was Frankensteining two patterns together. From the waist to crotch it’s my staple Butterick B5895 cigarette pants pattern (seen most recently as cat capris), and below the crotch curve it’s the leg from the Safran jeans pattern. I also used the grain line from Safran, figuring that the legs were the majority of the pattern and where I really wanted the grain correct, versus the crotch and hips. Not exactly a scientific method, but what I did nonetheless. 🙂 I wanted to try it because I really liked the leg of my Safran jeans and basically thought, what the hell! Why not. 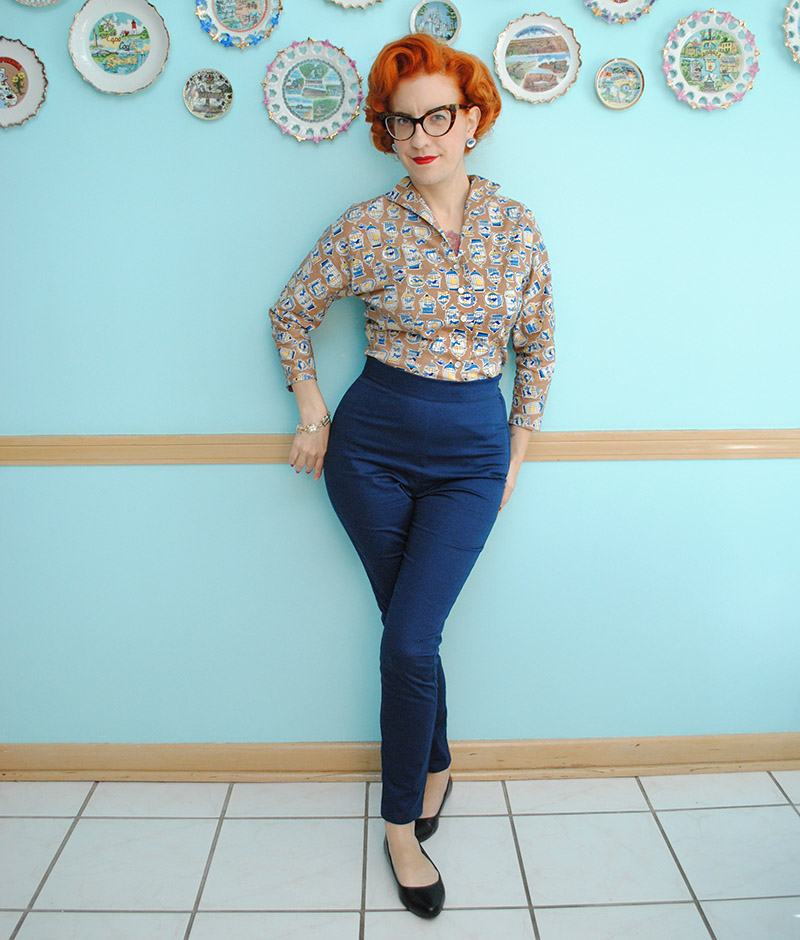 And boy, I’m really pleased with this particular pair! I love the fit! It’s a deep blue stretch cotton sateen with a light sheen… I think I bought it from Mood ages ago. And I did a lapped side zip. They were a bit on the tight side when I first tried them on (especially in the hips, which had to get taken in a bit to merge with the Safran legs), but after a bit they loosened up just enough so that I definitely think I’ll repeat this particular experiment in the future. I also took a small wedge out the center back for a sway back adjustment, which dips the waistband down a bit, but means that even after a few wears I’m not getting my often-typical fabric pooling at the base of my back. Huzzah!

I may finally be at a point where I can repeat this without tracing off the pattern and making yet another tweak… I’m not sure I’ve done that yet, even after umpteen pairs. Ha ha!

Next up: black sateen for sure! 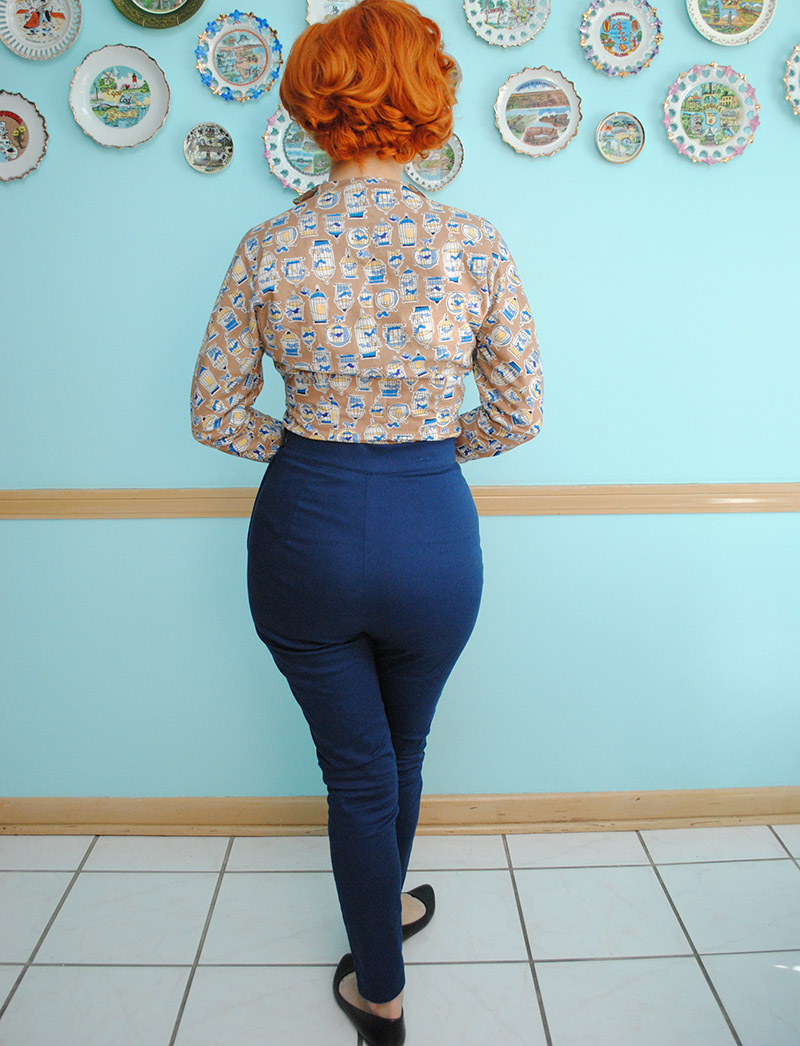 All in all I love this outfit and don’t be surprised to see this as one of my “uniforms” the rest of this year and into next: a comfy and vintage cut-on sleeve 50s blouse and cigarette pants. I’ve just been so into variations on this look lately.

Now, my kingdom for some stretch wool bottomweights! And stretch corduroys! And heavier sateens! C’mon fabric shops, I wanna get sewin’ for warm legs!! 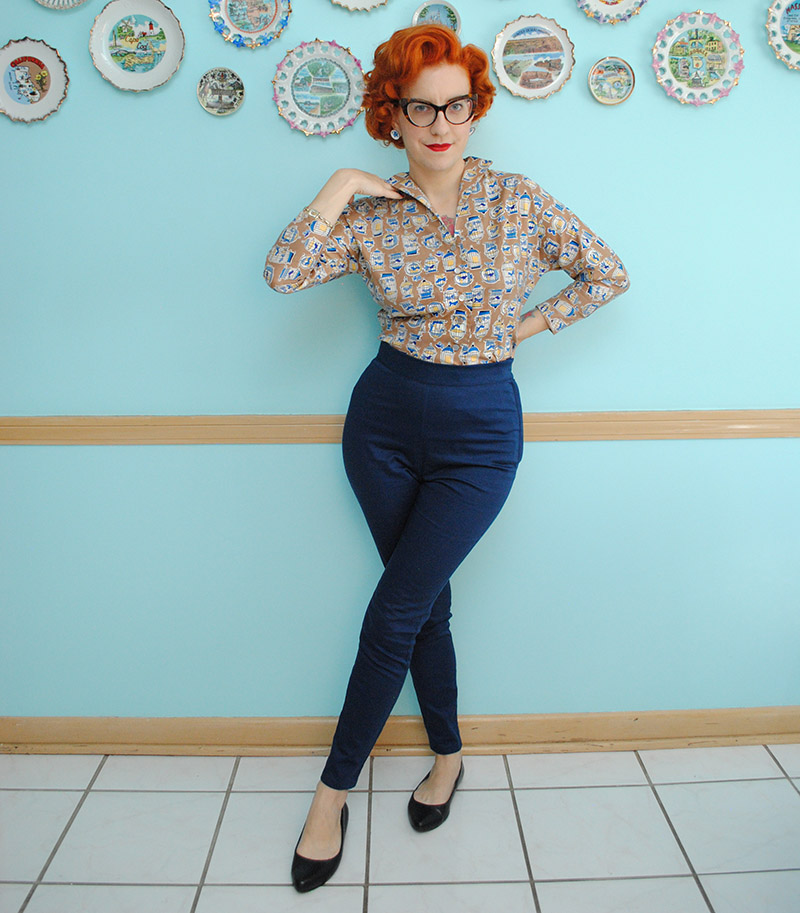