Merry Christmas from… my skirt! 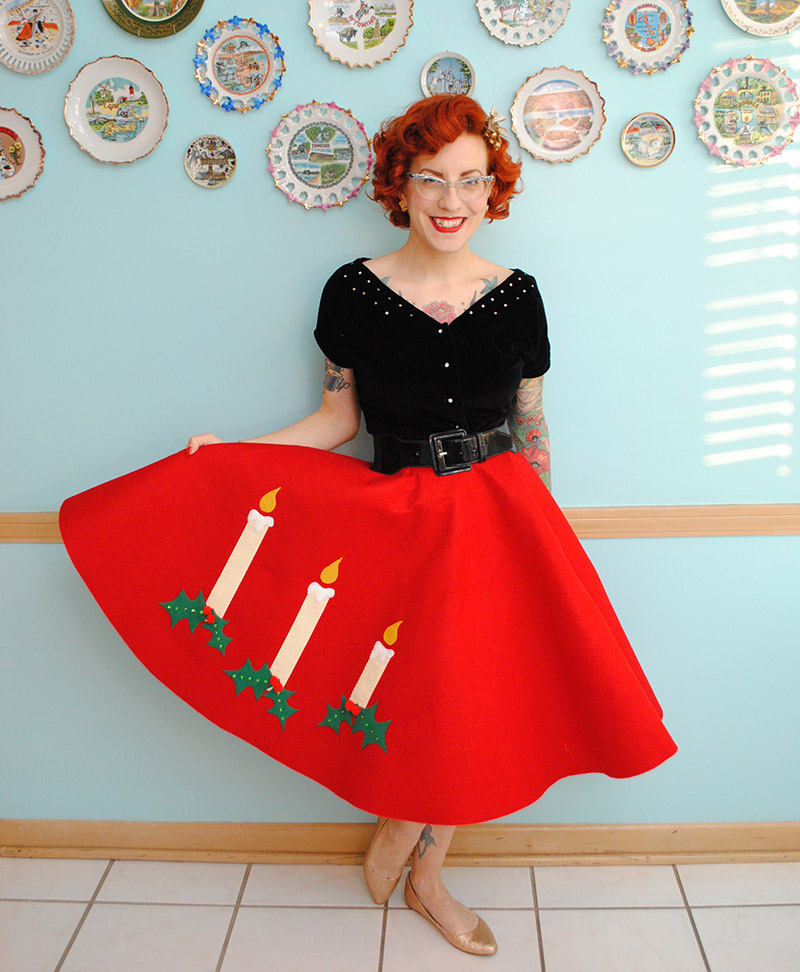 When Technicolor Cutie announced early in December she was going to do a Christmas novelty felt circle skirt sew along, I knew I was IN. It was just the excuse I needed to be ridiculous during the holidays, and I love to be ridiculous during the holidays. I think she ended up getting delayed with the sew along but I plowed on full steam ahead because I just couldn’t stop myself once I got started!

I wouldn’t normally sew a skirt with craft felt. But sometimes there’s just something so novelty, so kitschy, so wonderfully silly and retro and ridiculous, you put aside your normal tendencies and you just GO for it. This, my friends, was one of those times.

I used “premium craft felt” from JoAnn, which is a whopping 72″ wide. Judging from a couple of 1950s patterns in my stash, that width of felt was available back then for such silly circle skirt making, too. I’m short, and didn’t want to completely swim in this heavy felt skirt, so I went for a 23 1/2″ length, figuring I could cut it down even more if it felt like I was wearing a Christmas tree skirt. (Let’s face it: I’m wearing a Christmas tree skirt.) 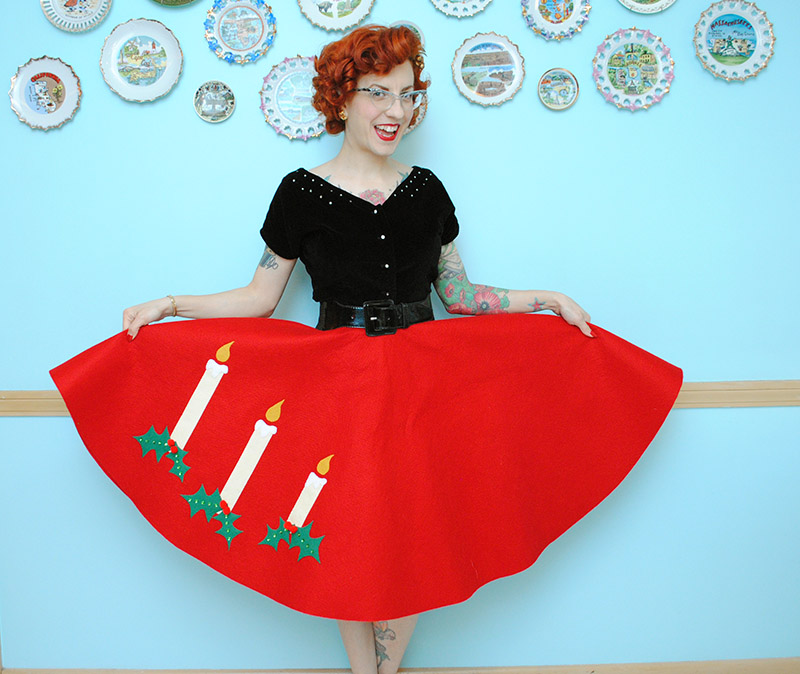 I used her original circle skirt tutorial for the math for the skirt, but because I wanted to be really really sure before busting into the felt, I backed it up by running my measurements through the By Hand London circle skirt app.

Including an outer waistband piece and a 23 1/2″ long skirt, I only needed about 60″ of fabric, so just over 1 1/2 yards. I bought a whole ton extra because I do, in fact, need a literal Christmas tree skirt for our actual Christmas tree, but considering the fabric was on sale with a 60% off coupon, that’s basically the cheapest novelty skirt ever.

Back to the math for a sec: if you’re one of those types who’s never satisfied with directions unless you understand why you’re doing something (not just how you’re doing something), you might be like me and feel suspicious that circle skirt instructions leave you with a radius to cut your waist from, but don’t actually tell you what the circumference of that circle is… and that circumference is actually the waist measurement. Okay there are seam allowances to think of, but if you still feel a bit iffy or don’t trust your math, plug the radius into a circumference calculator like this one, and it might give you a bit more peace of mind. 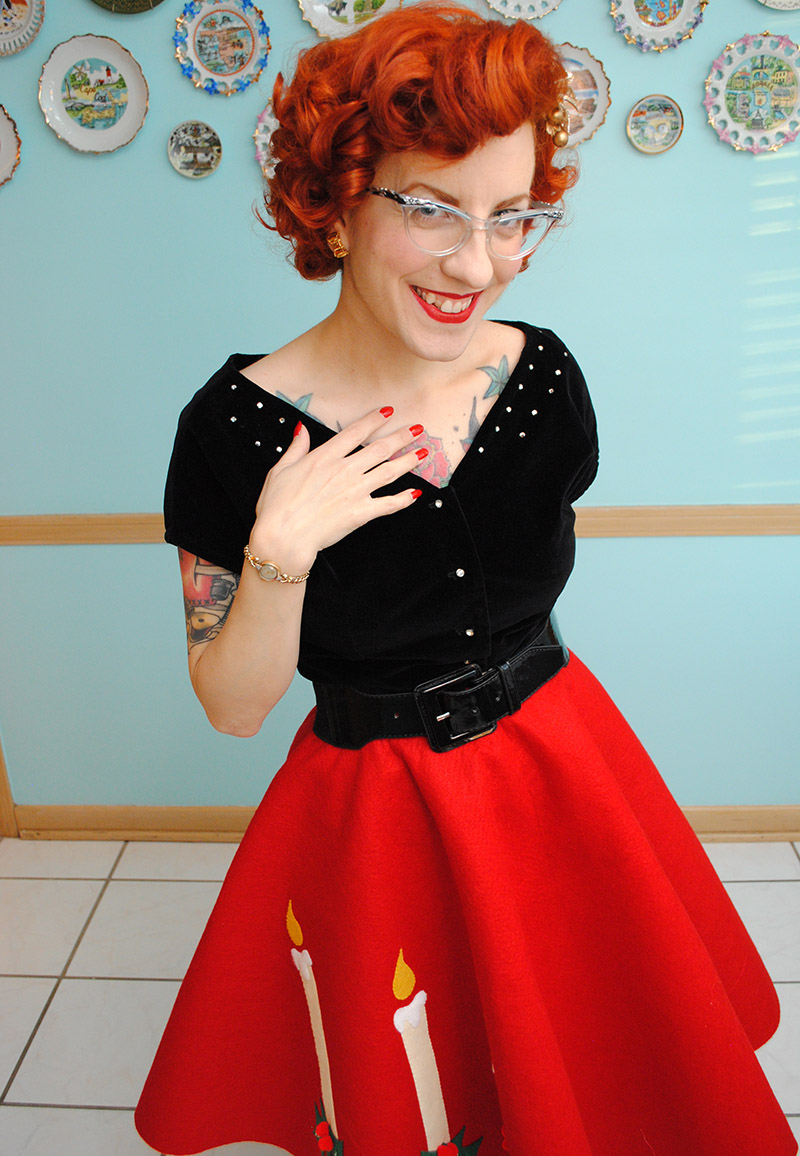 Working with craft felt as a garment fabric is one part awkward, one part hilarious. When you’re trying to wrangle a mountain of thick felt you find yourself asking “What the hell am I doing?!!” once or twice. Like when you’re trying to stuff it in your sewing machine to topstitch the zipper. Just… ridiculous! 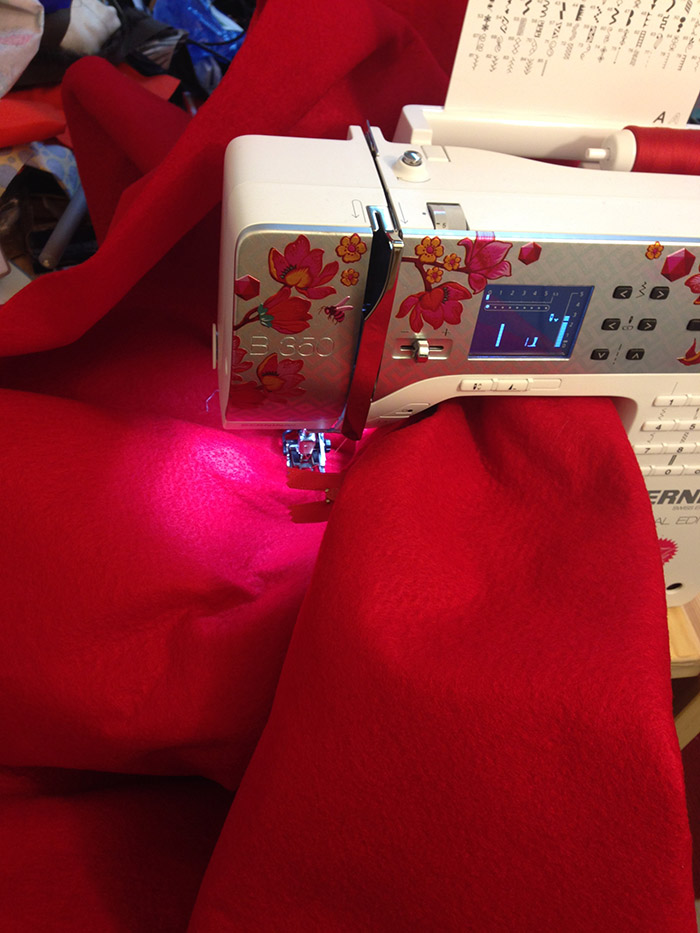 But I did try to treat it like I would a normal project. I staystitched the waist to prevent stretching (since a full circle skirt has a good bit of it on the bias… not that craft felt even really has a grain…?!), and did a center back seam with a zipper, stabilizing it with fusible knit tape like I would any zipper.

The center back was the only skirt seam, and technically wasn’t even fully needed… I could have done like Missy’s original tutorial and only sliced open for the zipper and inserted it, figuring that with all the folds from the full circle you wouldn’t notice the pucker it would cause under, but I couldn’t bring myself to do it. So instead I suffered through pressing the seam allowances open carefully without scorching the felt fabric. Loooots of steam, a press cloth, and a point presser/clapper! But any old heavy object or your fingers to press open and hold the seam until it’s cool works great, too. The felt was actually quite easy to sew and the topstitching sank into it beautifully. 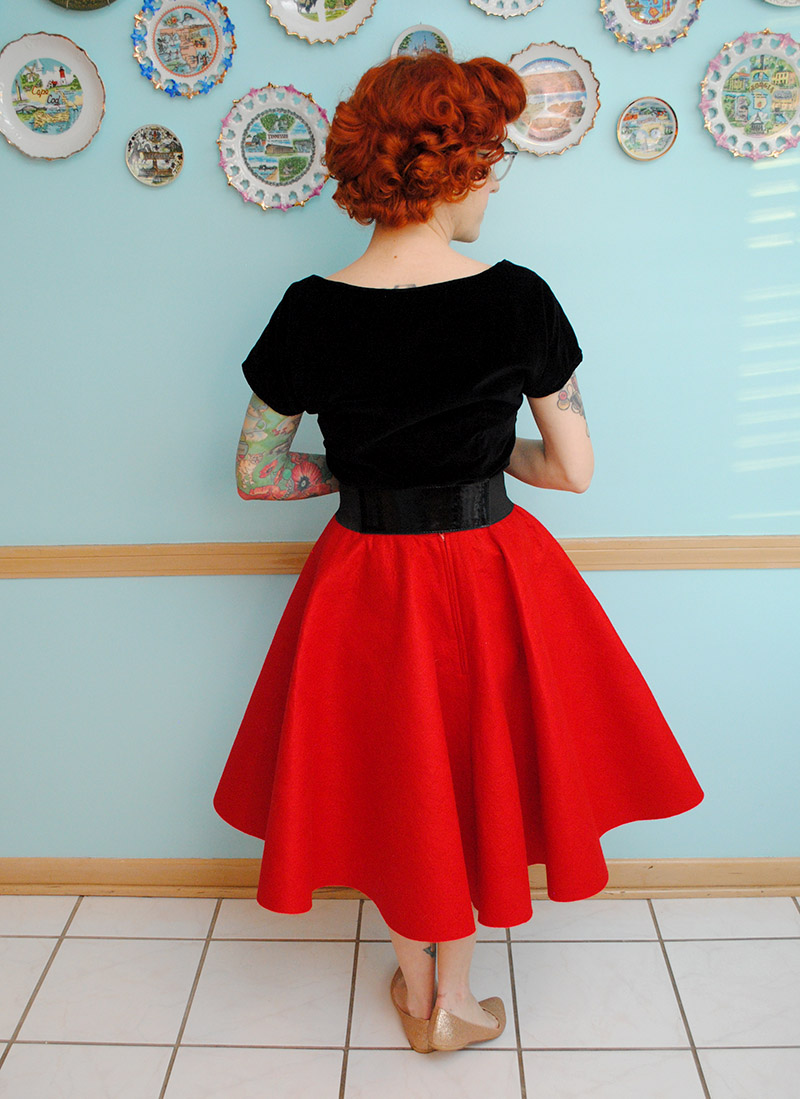 Because I’m holding the damn thing up in every photo so you can see the candles, I realize I don’t have any good shots of the skirt hanging nicely (so you get the below where my face is blurry, doh), but it lays magically, even with no crinoline underneath. And I was wearing one, but mainly just “because” as it didn’t really do anything. This skirt can literally stand up on its own! 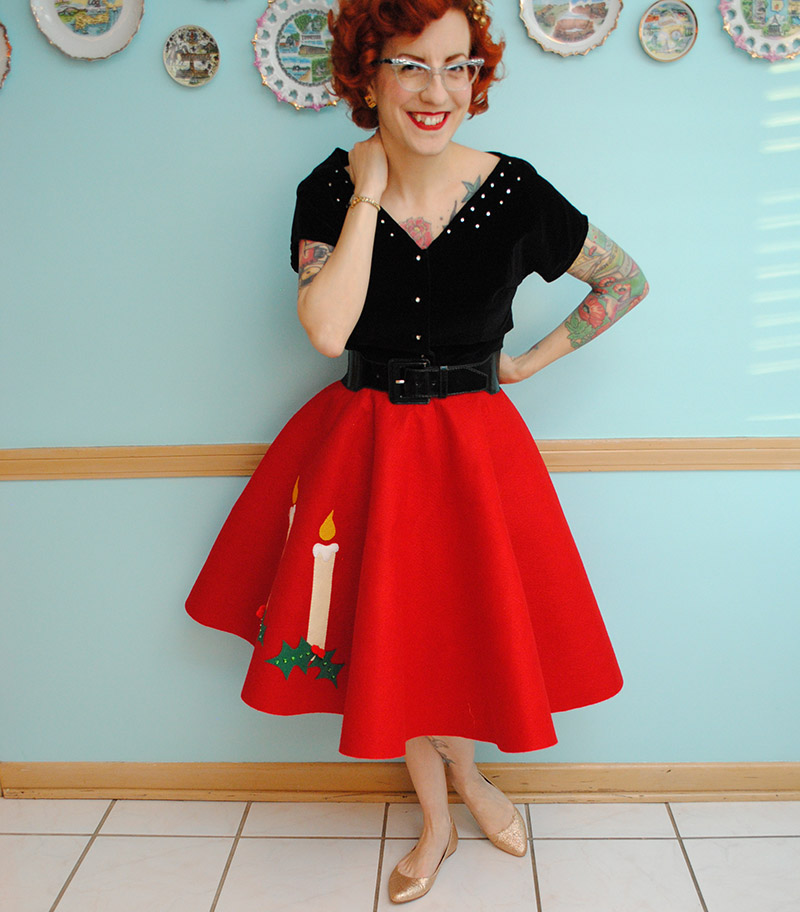 Tooootally not kidding. Here’s the skirt on my ironing board. Told you! 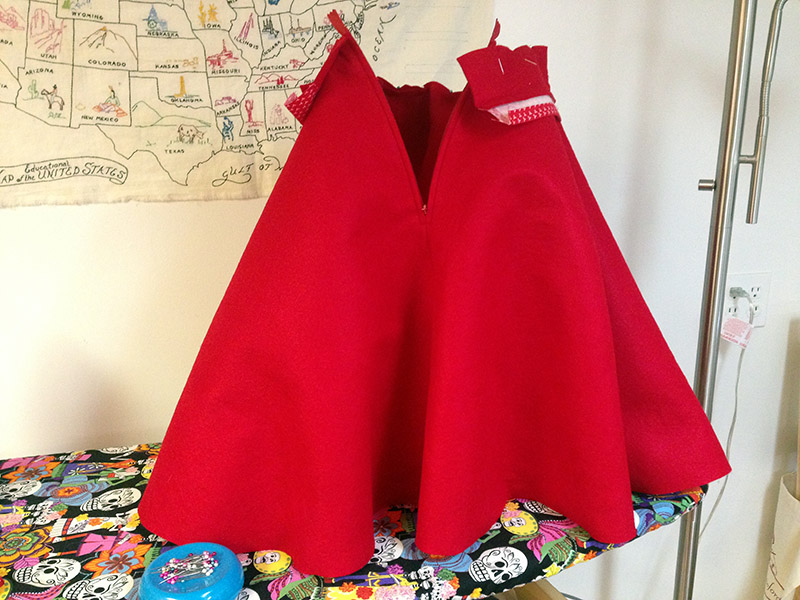 I went with a two-piece waistband that I fashioned from a waistband I use on a lot of things, to cut down on bulk. Due to thickness, I made the inside waistband out of quilting cotton, but I interfaced it with firm fusible weft interfacing. I was really worried about the weight of the skirt hanging off the waistband so I wanted it as firm as possible but not bulky like the felt on the outside of the waistband. I wasn’t sure exactly about extra stabilization, so I inserted some rayon seam binding (which is not stretchy) into the waist seam as stay tape. It’s very thin but stable so I figured it could only help. 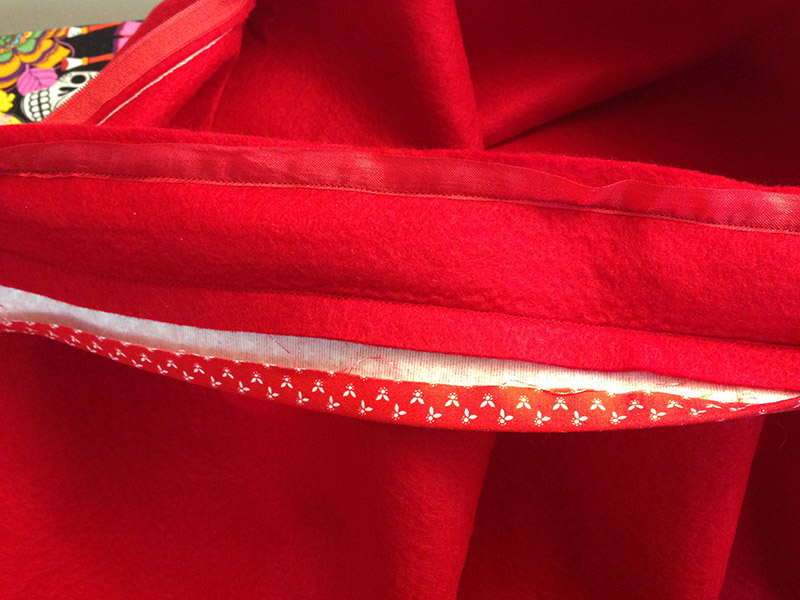 Not that I have any photos of the waistband as I wore the skirt with a belt, but it all worked great and it seemed perfectly capable of holding up the heavy skirt. 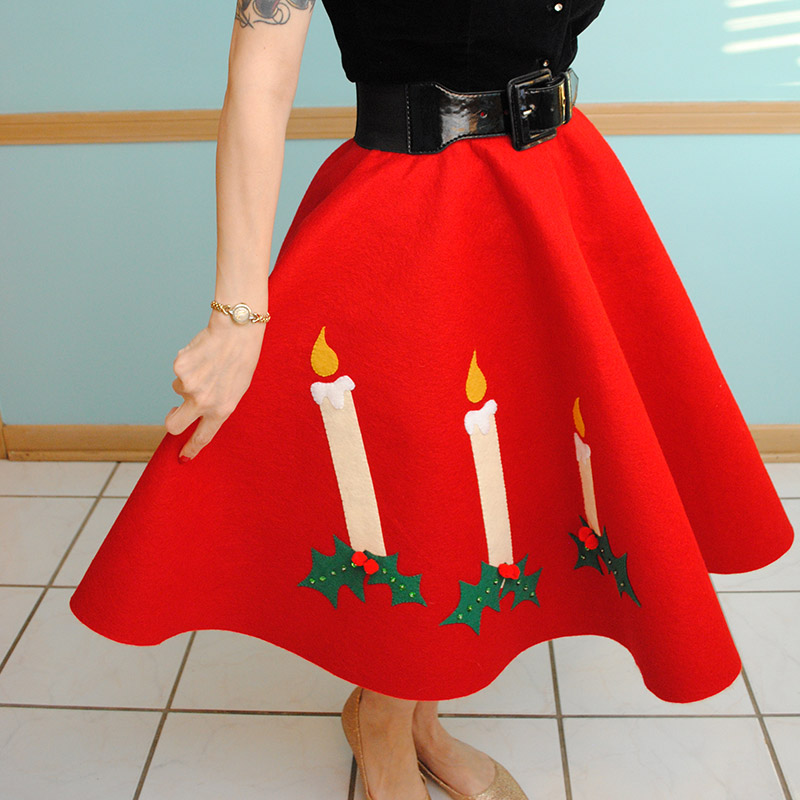 To come up with the felt appliqué design I looked at lots of vintage felt craft images on Pinterest and the like. Sooo much inspiration! My main idea was to alternate between a set of two candles and hanging ornaments, which I drew and cut out of paper (twice in fact, after I decided the scale was too small the first time). Then I cut the items out of wool felt and craft felt, depending on what I had in each color. 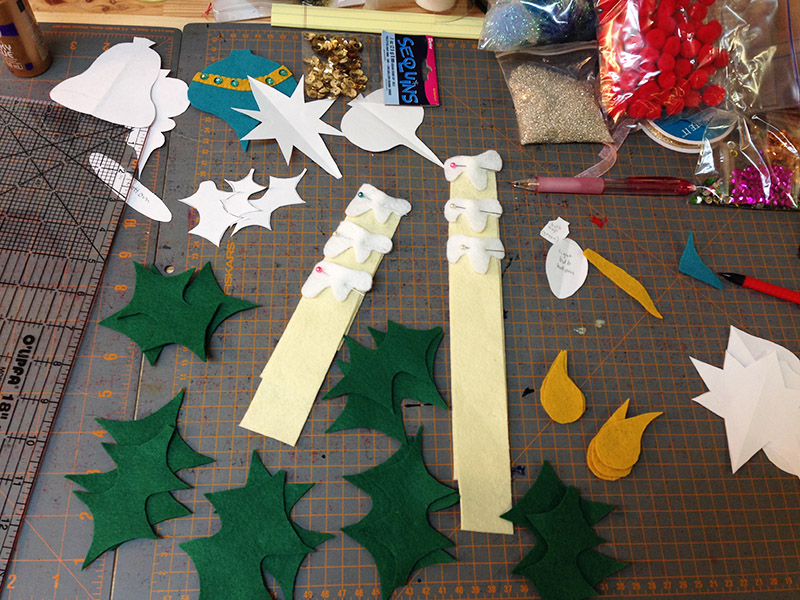 I even started to lay that out in felt and paper on the skirt, which you can see below (the holly leaves were stand-ins for ornaments, by the way). 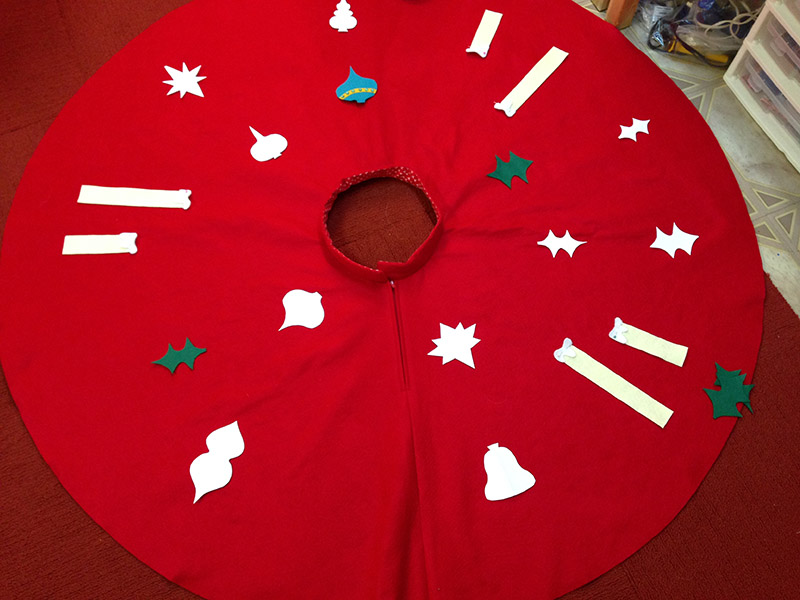 I kind of decided it was a bit much, though. Not necessarily to look at, but all that appliqué and hand sewing. And with a December 19th holiday party as my deadline, at that. So I settled on three candles, and I LOVE them!

Each candle is hand stitched together first, and then they were hand stitched to the skirt. Each holly leave has a line of 4 or 5 sequins (sewn in place by a bead), and the berries are little red pom poms. 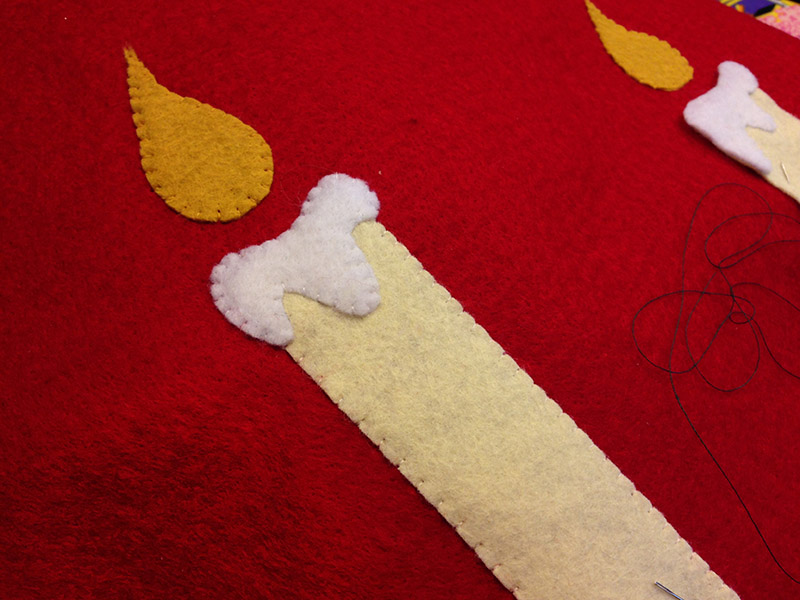 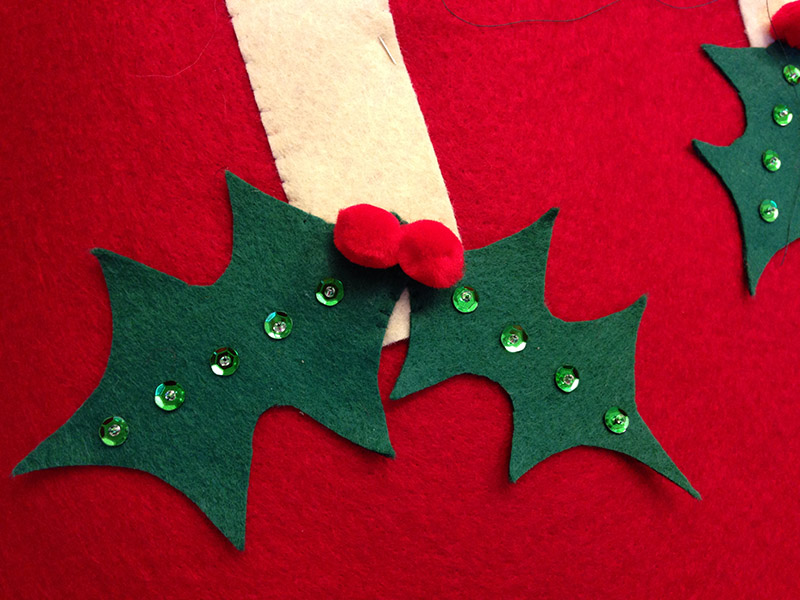 I rarely want to undertake specialty projects, I’m generally all for sewing for “real life” things. But I’ve been doing a lot of felt Christmas crafting anyway this season, so a felt circle skirt seemed like a perfect crazy holiday project! 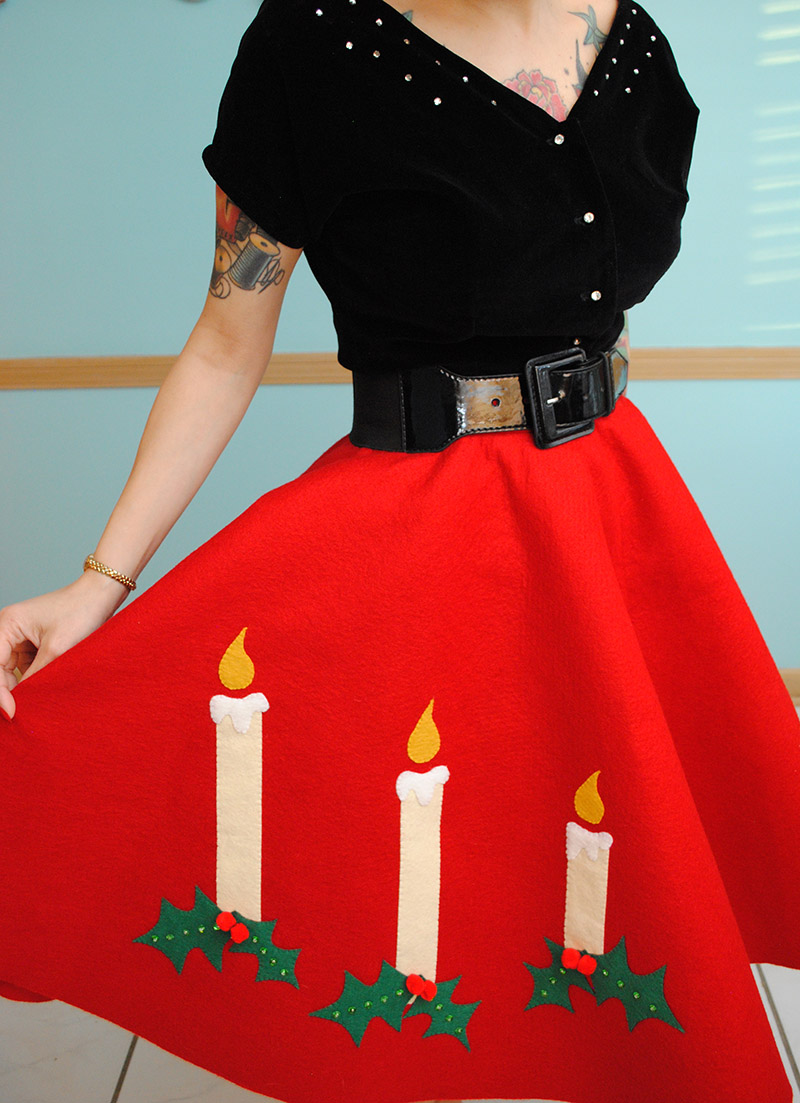 I paired it with a vintage black velvet top adorned with rhinestones and went simple (errrr, simple-ish) with everything else: a wide patent belt reminiscent of Santa Claus with this outfit, gold bow earrings, gold glitter flats and a vintage watch. 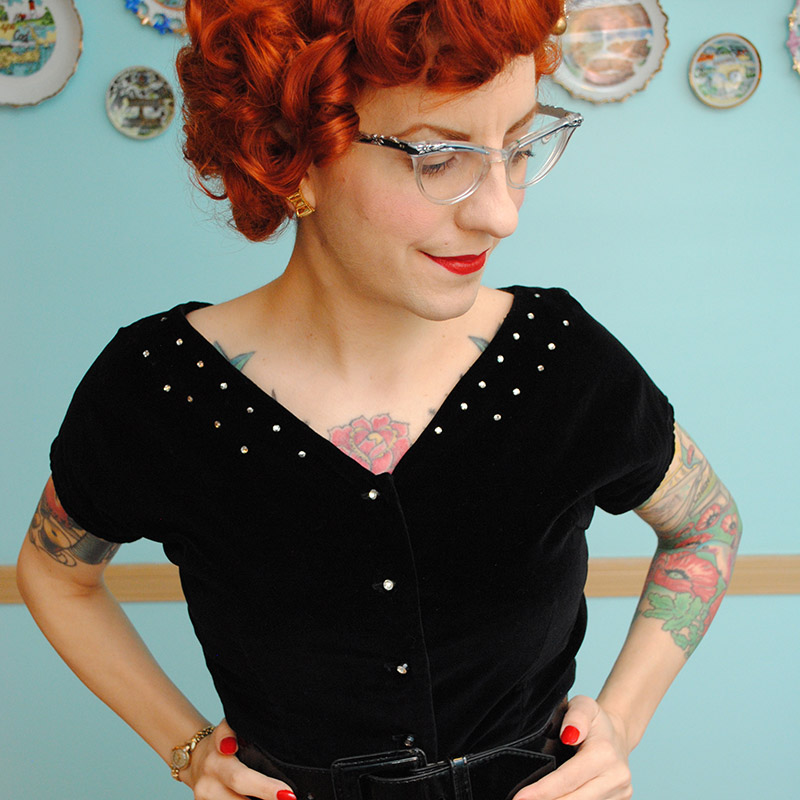 Oh and a gold hair flower, of course! 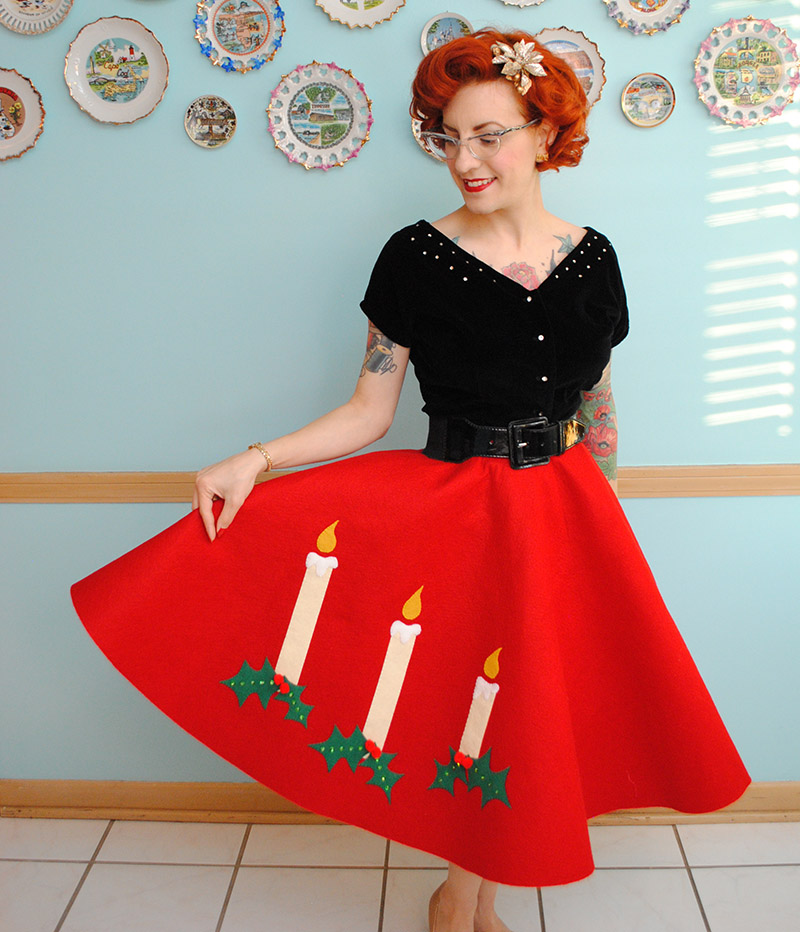 Wish I could have gotten a photo of the whole ensemble with my outwear, which featured my amazing vintage black wool princess coat, but this time of the year is just the pits for photos. As it is, I had to make a mad dash to move our kitchen table out of the way just as dusk was hitting to get these… and then take it all off again until we actually went out that night. C’est la vie. 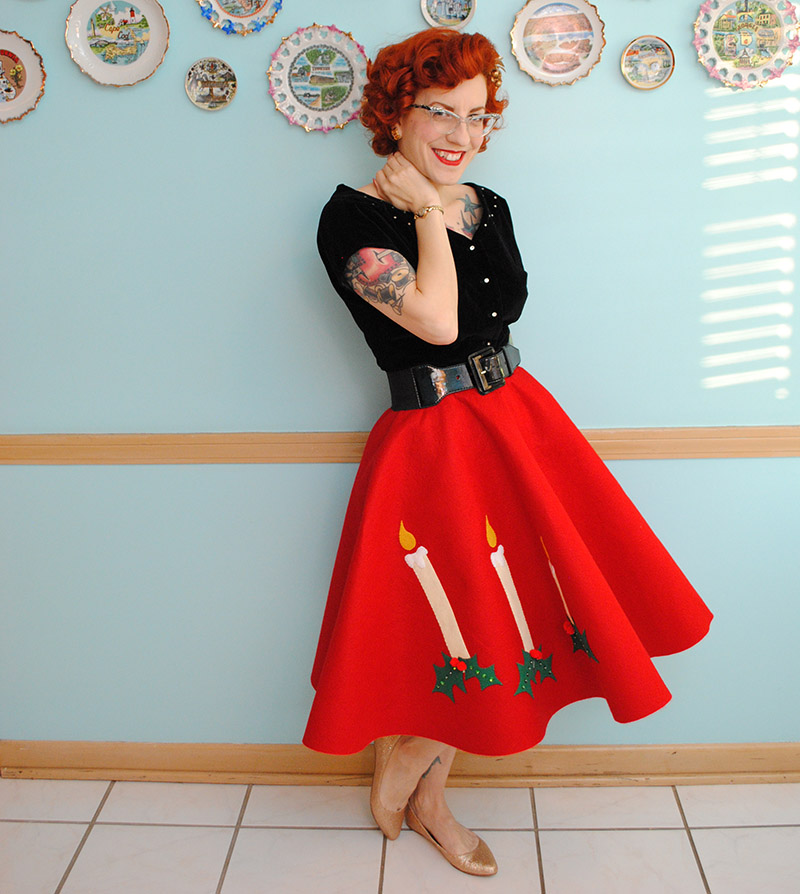 Well, that’s the Christmas scoop on this skirt. I felt magically festive when I got to wear it, and it might have to make another appearance on Christmas Eve or Christmas Day, too!

I wish you a happy and healthy holiday season! xx 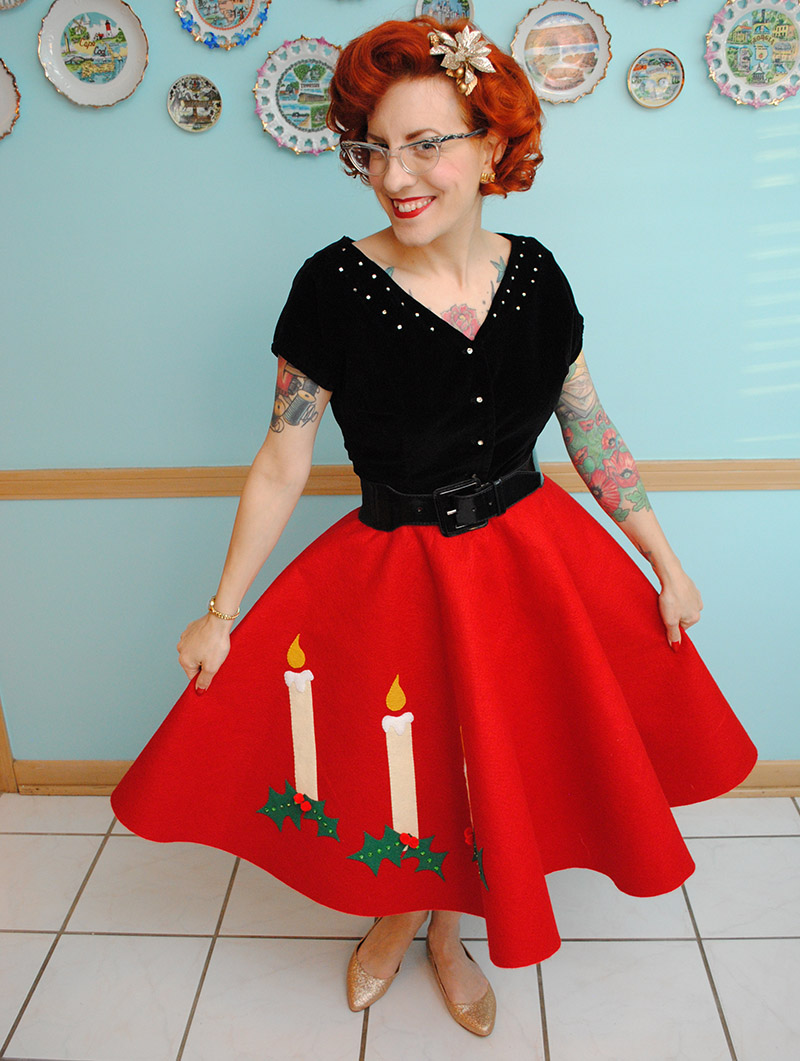