There’s a couple of holidays for which I’m interested in sewing, and Halloween is one of them! (It’s a short list: the other is obviously Christmas.) 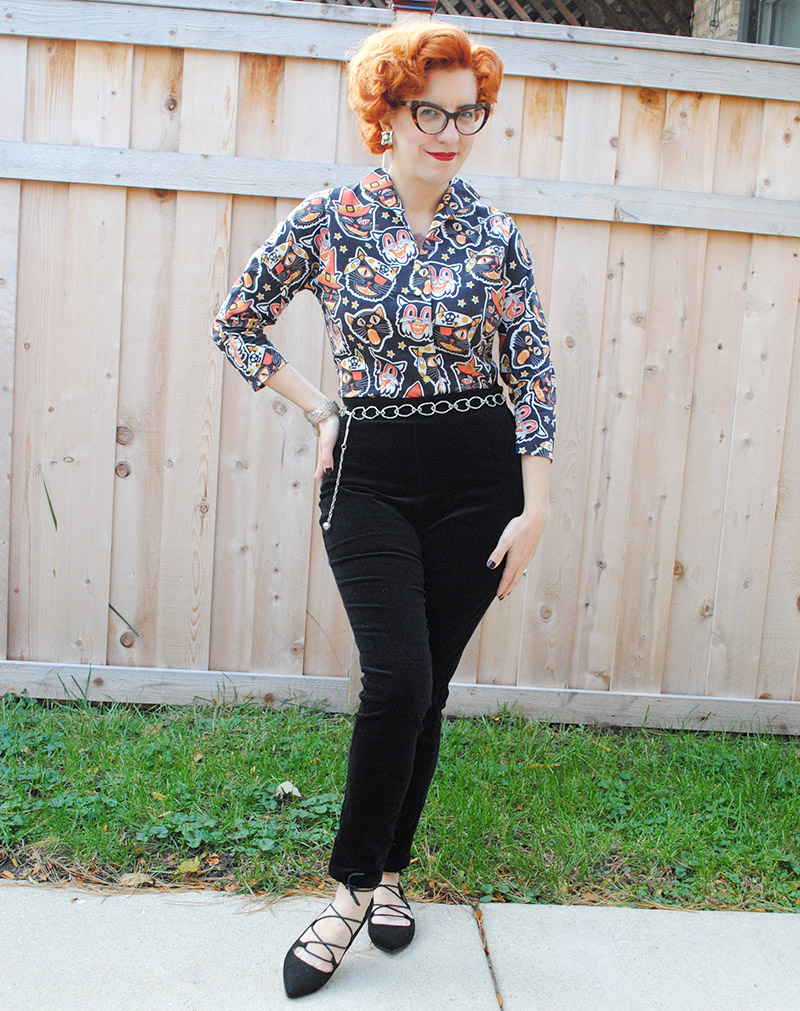 Last year, I was in London meeting up with sewing friends on Halloween and sewed myself a theme-y blouse for the occasion. I used the same pattern as my recent Bye Bye Birdie blouse, and this year, I’ve used the pattern again! What can I say, I really love this pattern. It’s Butterick 6223 from the 1950s. This time I made the couple of minor tweaks to the pattern that I noted to myself last time, and now I think I’m officially good to just sew, sew, sew this baby as much as I want. Which is a lot! I can’t get enough of this pattern! 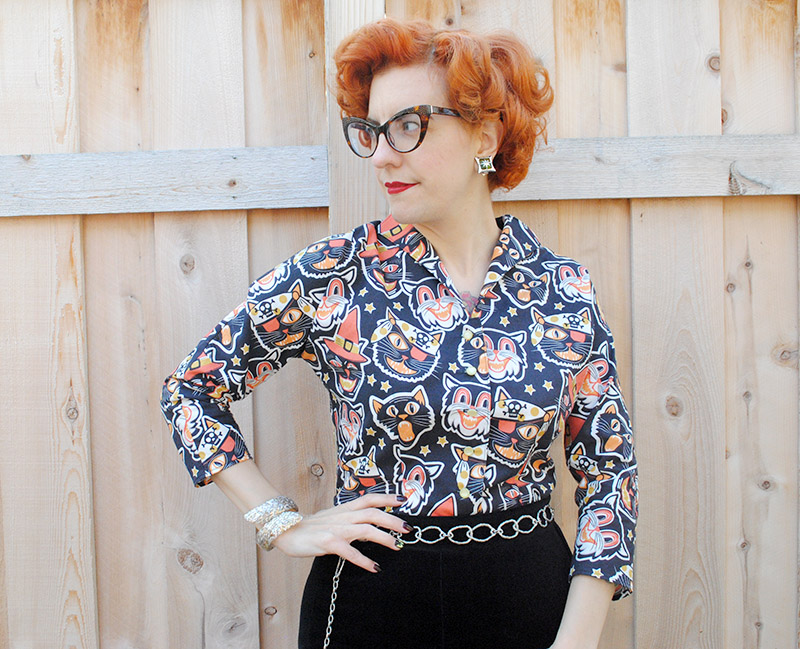 Isn’t the print just perfect?? I stumbled across it on Etsy and just had to have it. It’s from the Spooktacular Collection by Maude Asbury. Several other prints in that line are great too (here’s a quick search on Etsy). But those cat faces, I love them! 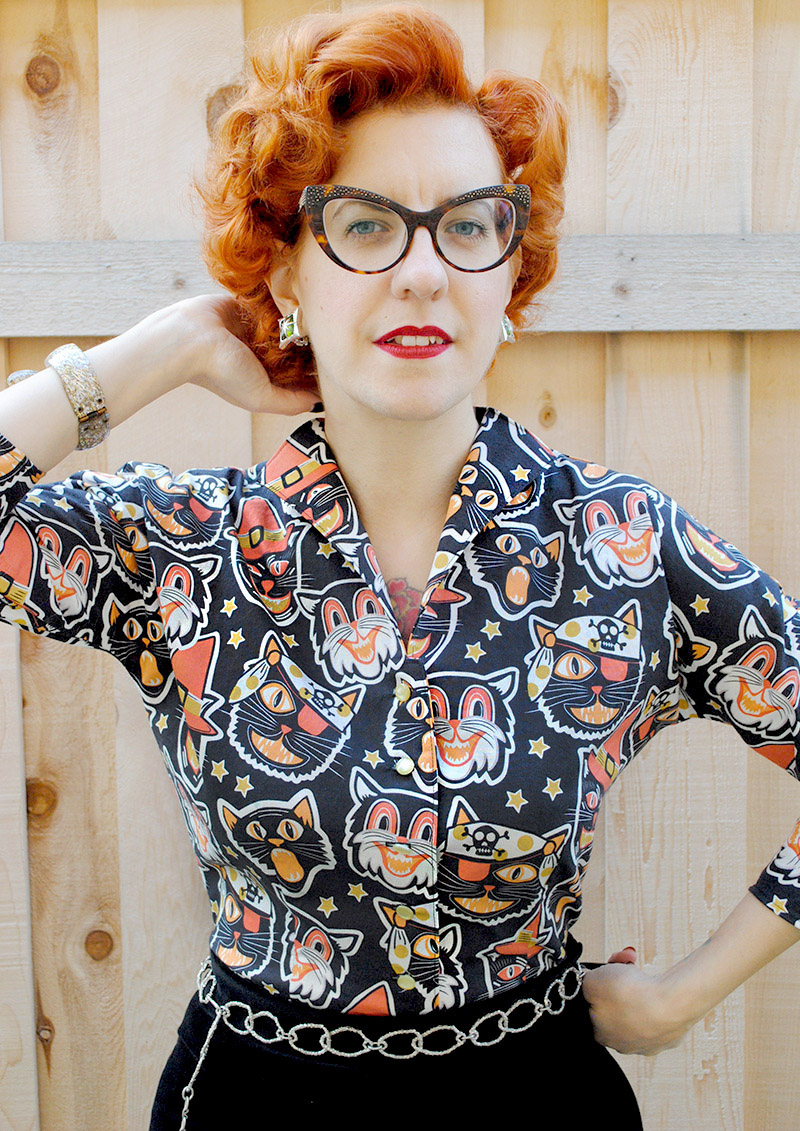 There’s one main issue with this particular blouse, entirely due to my own procrastination: I wailed about it on Instagram, but I hadn’t changed my serger needles in *mumble mumble* ages, so it started causing a series of pulls along the seam lines of the blouse. The problem was that I didn’t notice right away, because I was trying to sew this fast and do a bunch of seams at a time. So both side seams (which go from sleeve hem to bodice hem) and both sleeve seams (which go from shoulder to sleeve hem) are affected. Ouch. 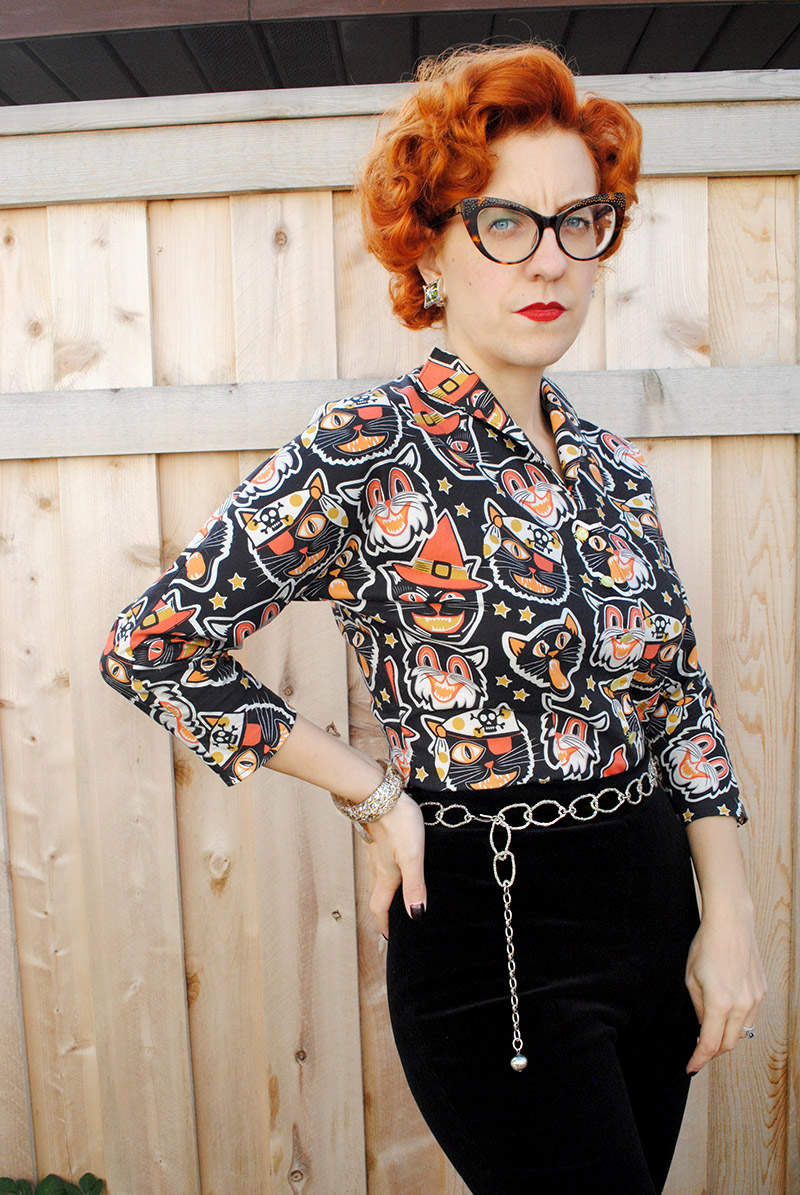 Many people suggested it looked like catch scratches, so these are some naughty cats on my blouse! But lesson learned: be as good about changing your serger needles as you are about your sewing machine needles. Thankfully, once I finished the blouse I actually forgot about this issue until I started writing this post (and having even worn the blouse once in the meantime). Since it’s only something I’ll be wearing one season out of the year and I didn’t have enough fabric to start over, I’m not worrying about it. It definitely doesn’t change how much fun this blouse is!

Now let’s be honest, it’ll be useless to talk much about my cigarette pants because they’re black corduroy, so they basically turn my legs into black holes! 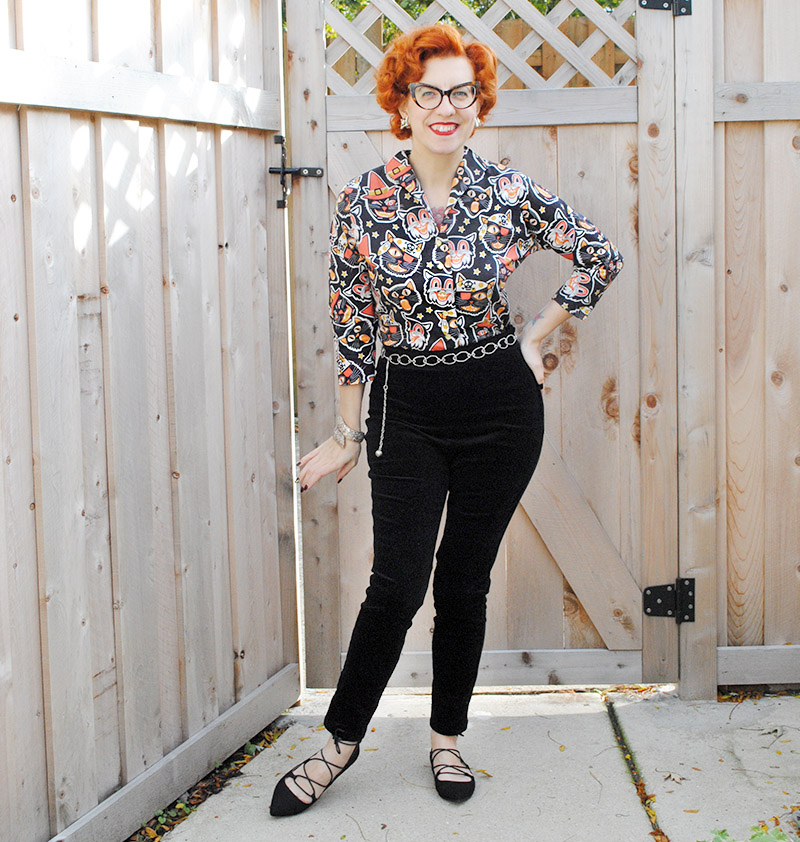 They’re another pair of Butterick B5895, what can I say? I sew this pattern all the time. They’re made from stretch corduroy, in fact the second pair of the same pattern in the same fabric! I made the first pair a couple of years ago long before many fitting tweaks, so I wanted a pair with a slimmer calf and slightly more cropped length with the hopes of wearing them with ankle boots in winter. Yay for wide width fabrics and having short enough legs that I could get two pair of pants out of the yardage I’d bought just for one pair. 🙂 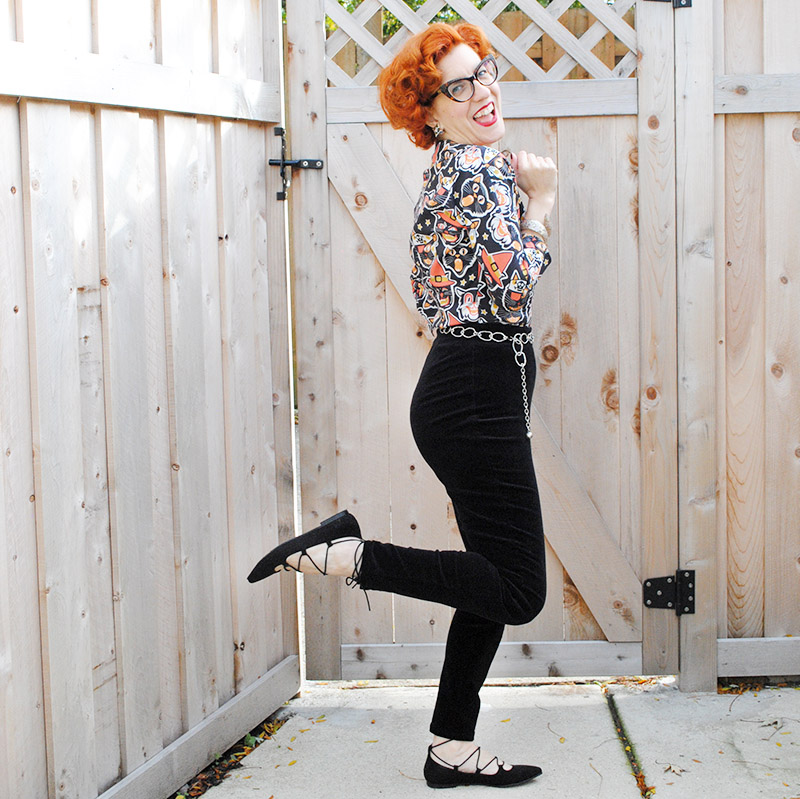 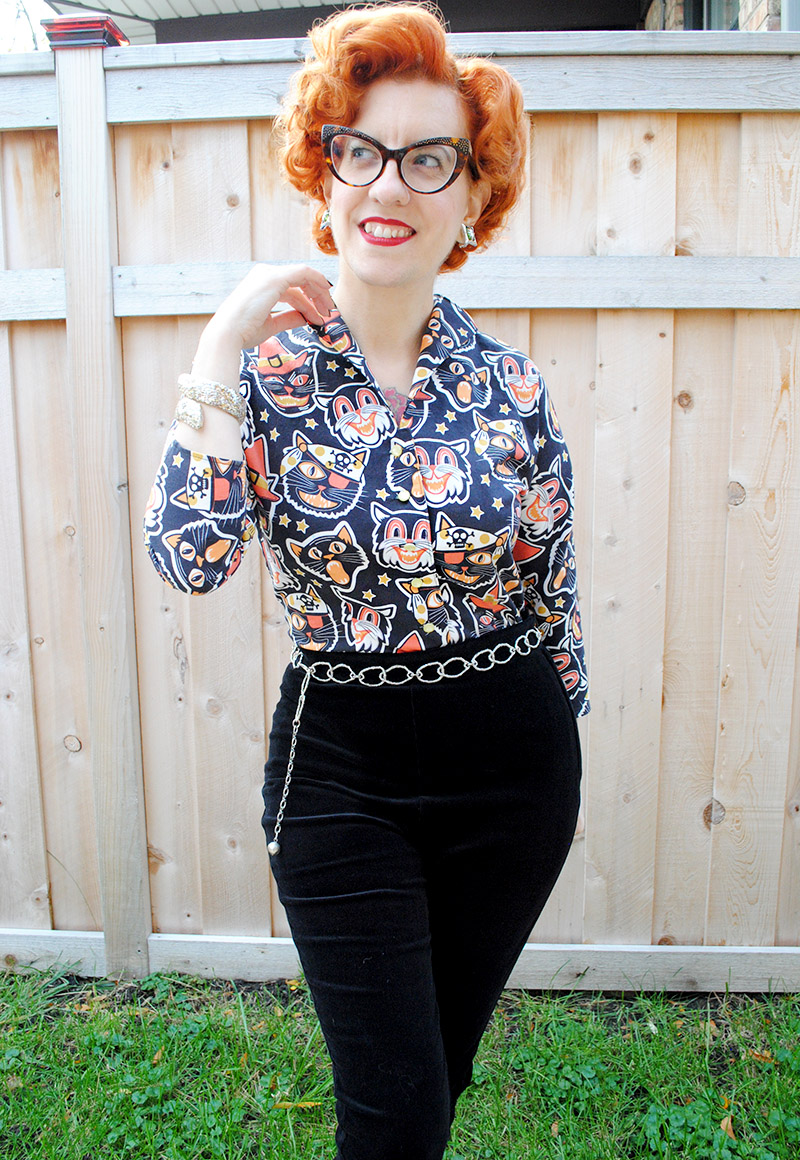 Tonight, we’re watching scary B movies and possibly passing out candy. I say possibly only because we’re on a small block near a big street that doesn’t have a stoplight or stop sign, so usually kids tend to stay tucked back into the neighborhood. But there are a couple of little kids getting close to trick-or-treating age on our block now, so we’ll see. 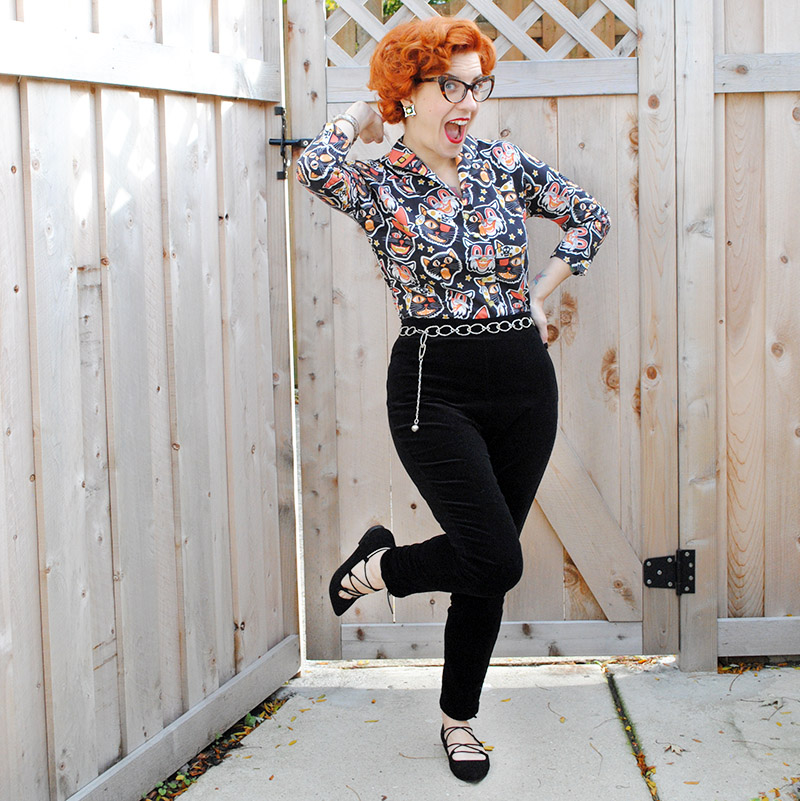