There’s a lot of really ugly things going on in the world right now. It’s been an especially crazy whirlwind of a few weeks in politics, with some truly dark happenings (mixed in with a couple of good and important ones). I haven’t felt much like blogging, but in an effort to do something normal with myself, I remembered Mel had helped me take photos of a few things I’ve made and I hadn’t looked at any of the photos yet since it was all prior to vacation, and one of those things was something I particularly like.

So what I can muster up for you is the brightest, most cheerfully colored thing I’ve probably ever made. This is actually something I made at the end of last summer, but never got a chance to wear until this summer.

Better put your sunglasses on for them! 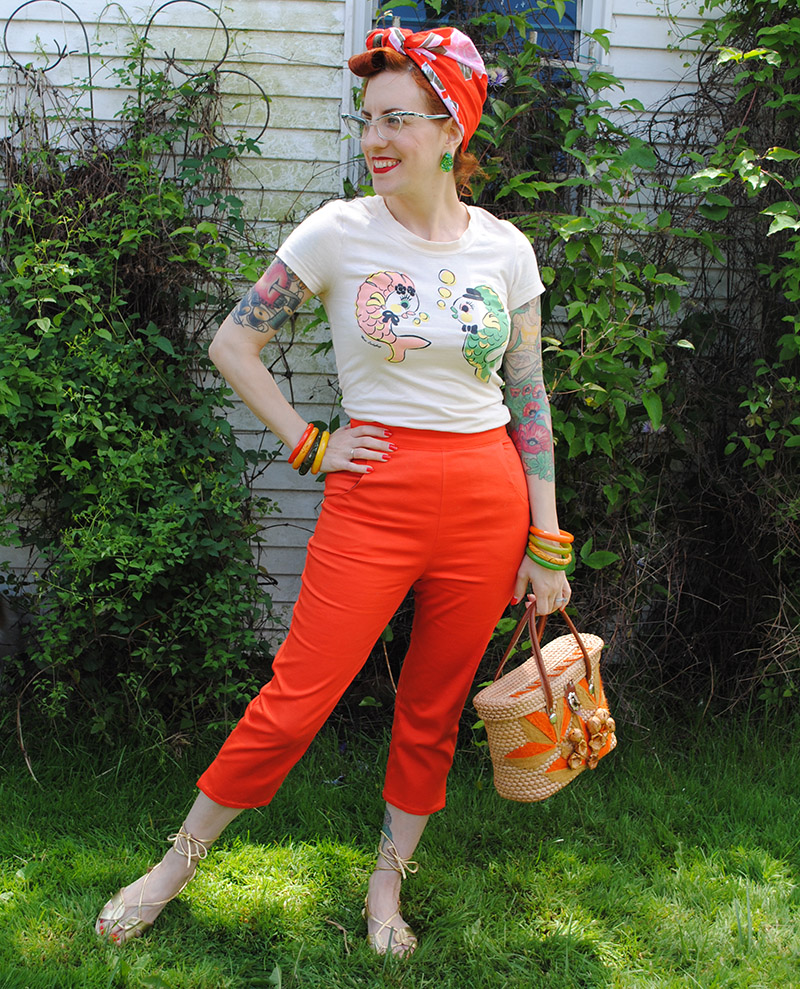 These are a pair of Butterick B5895 capris. For that pattern having such a back story of muslin hell for me two years ago, where I finally reached a more-or-less happy place with the pattern, then going off to sew it a handful of times since… none have ever made it to the blog, even though I wear them a ton! But they’re mostly denim or black, and really, pretty boring to look at and talk about. Blistering orange, slightly more interesting.

So this pair of capris is probably the first to get its own post! Unlike most of the times I’ve sewn this pattern, I included the front pockets, lining them with cotton lawn (leftover from this vintage top). I did a trick I remember reading on Karen’s blog at some point last year (can’t find the specific post), to try and make the pockets not show through the front as much: instead of serging the pocket facing, I sewed the seam, then zigzagged next to it, and then pinked the raw edge close to the zig zag stitch.

Bright orange is pretty damn unforgiving, so I’d say the combo of lawn and pinking worked nicely as you can only barely make out the edge of the pockets! 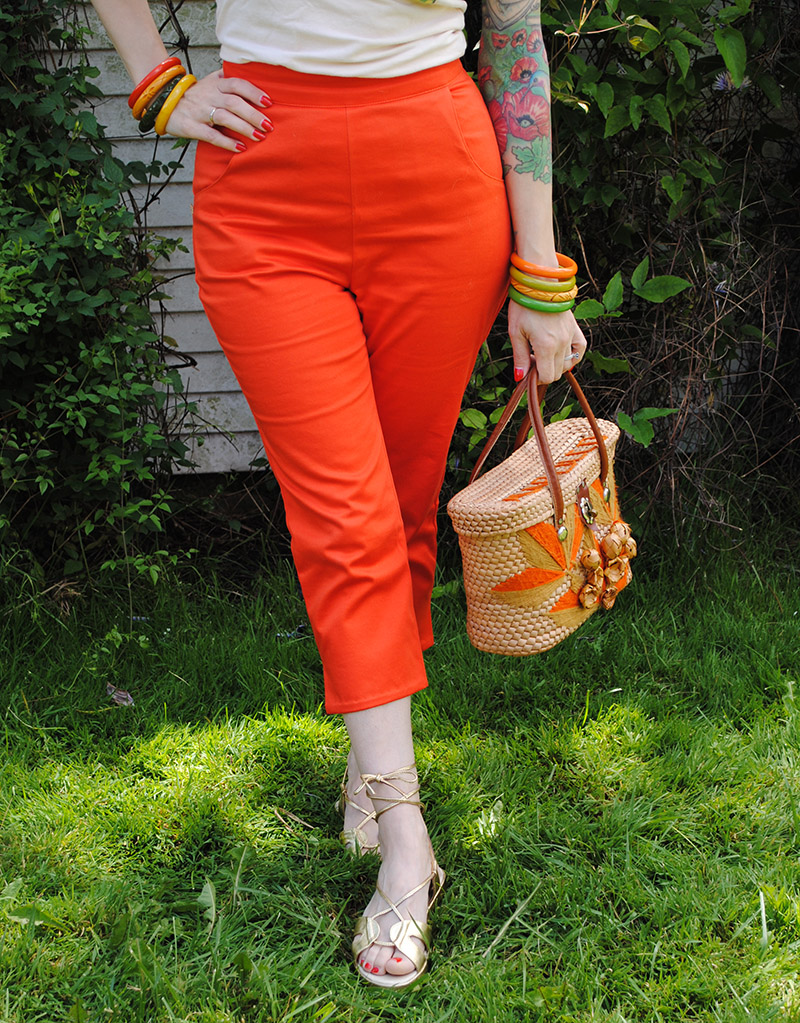 I also did a center back zipper because of the front pockets, although I often do a side zipper which I find easier to do up. (I swear the zipper top and waistband looks normal in person, no idea what’s going on in this photo!) But one interesting thing this unflattering back view shows me is that I think I did a swayback adjustment for this version. In my previous versions I’d tend to get a bubble of fabric at the small of my back, and I don’t think I have that with these (definitely not in the pic though I don’t think I’d been wearing them for long). Ironically when comparing pattern pieces, the one I’d marked that I did a swayback adjustment on really looks minimally different from the one I didn’t, and I didn’t write down what I did… so, anybody’s guess! But I guess I’ll use that pattern piece as a base going forward! 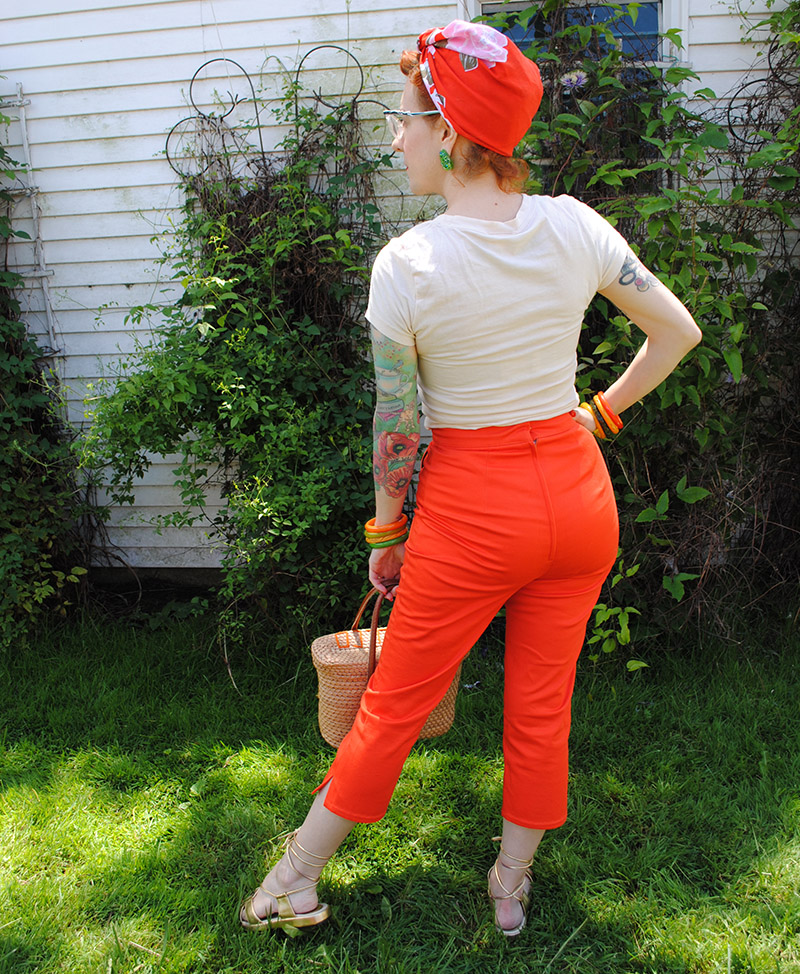 Last year I felt all gung ho about attempting to incorporate more light or bright colored bottoms in my wardrobe, which is an idea that mostly fell flat once I was planning and sewing. I started making these orange capris as ankle-length trousers, but when I tried them on before hemming, I didn’t love them long. I just didn’t see myself wearing them, in spite of what I’d thought previously. But I decided I’d totally wear them if they were capris. So, I lopped off several inches and did a little vent at the hem. Easy fix! And suddenly, the most summery capris possible. 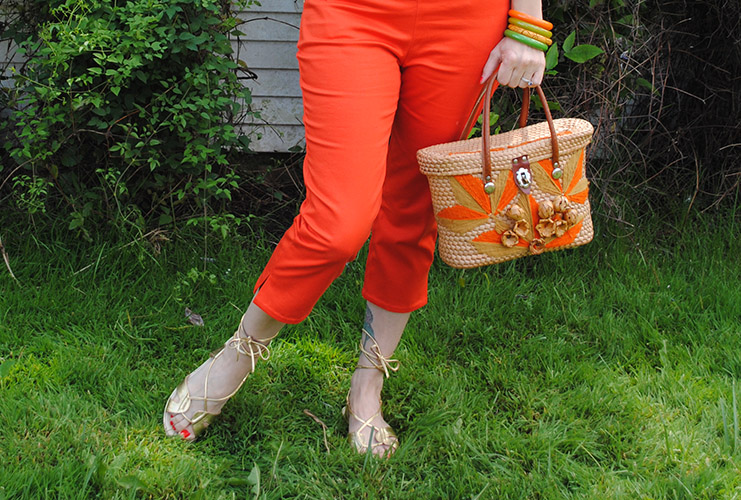 The fabric is Robert Kaufman Stretch Vera Sateen—don’t let the reddish photo on fabric.com fool you, this is so orange you can practically see these capris with your eyes shut! But the fabric is great. I used some last year on the shorts I made to accompany my Refashioners project. It’s not too shiny (but use a press cloth when pressing), and has a nice amount of stretch and pretty decent recovery. Though I honestly don’t get too bent out of shape about that as I’m really not aiming for skin tight. I just wash and dry it as normal. I know you’re not really supposed to put stretch fabric in the dryer but there is only so much ironing I’m willing to do!

I wore this outfit about a month ago when I was getting my hair trimmed and colored. I’d just gotten these Rocket Originals Roman sandals in the mail and gah, I adore how they look. They’re mostly very comfy except the laces are a bit stiff on my super sensitive ankles, so they can rub a bit where they cross in the back, but I do love them so. And I’ve been loving metallic sandals this summer. 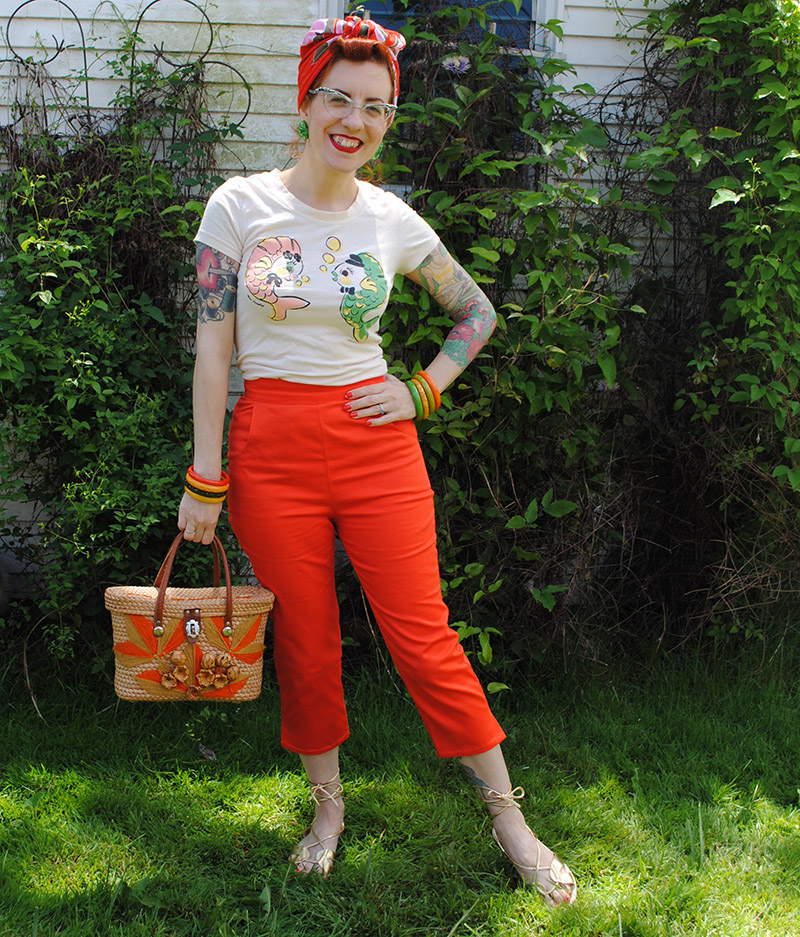 I really like these colors together, and they’re similar to an outfit I wore last summer (in fact I wore a lot of the same bracelets and had the same purse then). Shades of orange, coral and orange-red work so well with greens, so I threw them all together in this outfit. A great combo for hot weather, and we’ve been having plenty of that already this summer.

I’m currently knitting an orange cardigan, and have really been searching to find more fabrics that incorporate the color (which is proving a struggle!), as I’m enjoying it so much. Maybe my hair color is rubbing off on me! 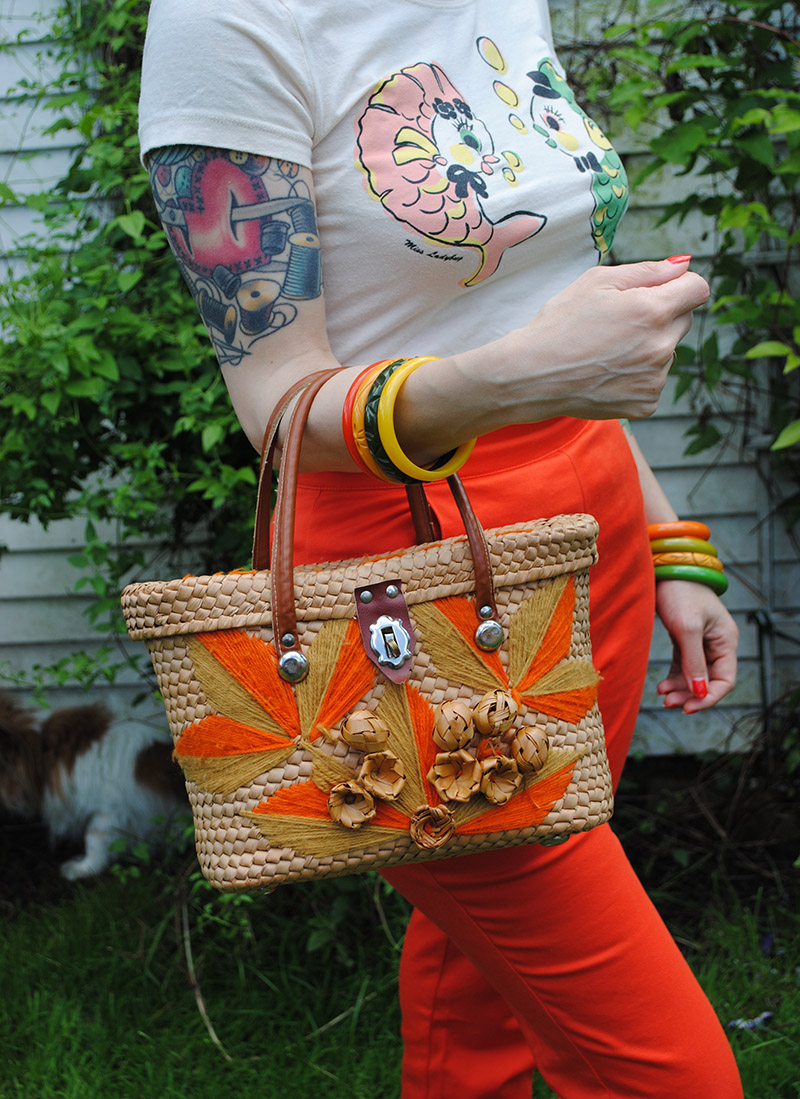 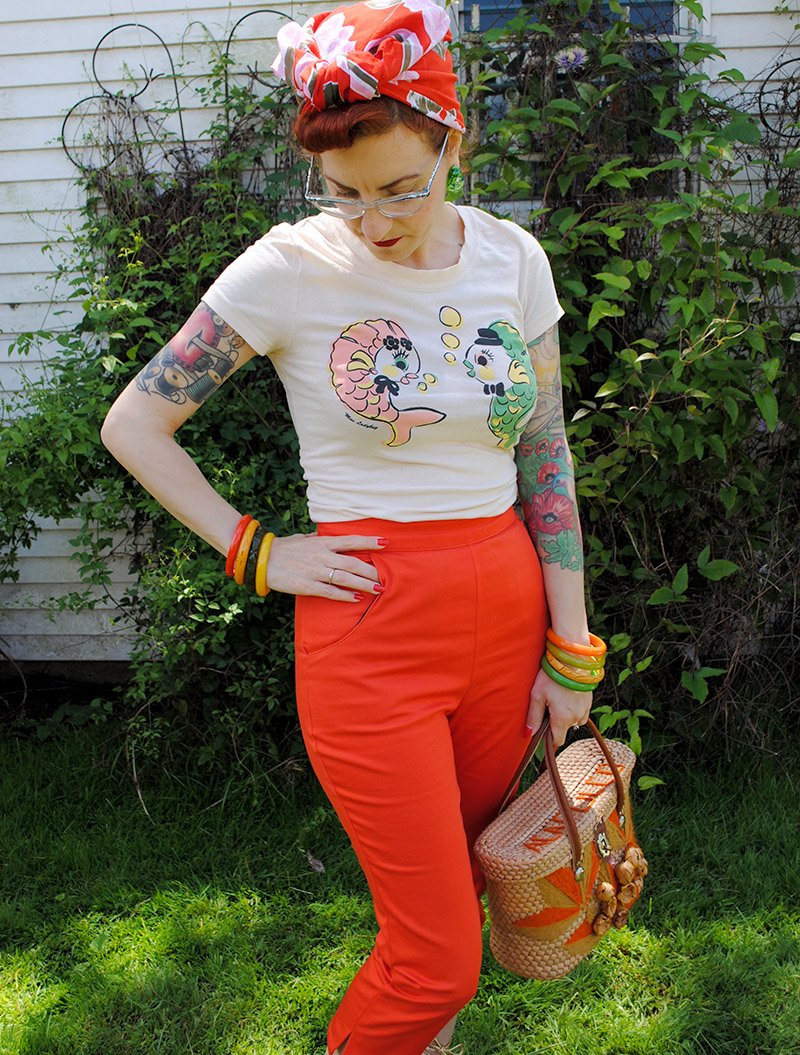 I really love these orange capris. They’re fun and a bit funky, and their bright color has taught me to try and be a little more fearless about fitting wrinkles and just enjoy the result. I feel cute and sassy in these, they’re comfy and pretty damn easy to wear, and that’s about all I can ask for!

Good thing, as I’m about to start a pair in cheetah print sateen, soon! 😉 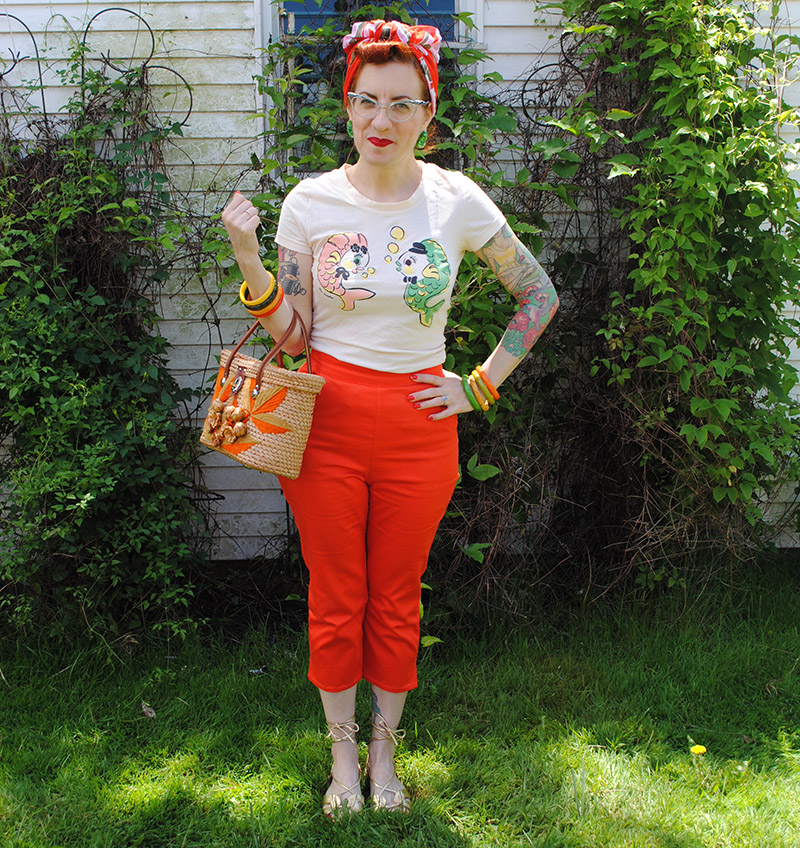