Have you been following along this August with Portia’s fantastic Refashioners series over at makery.uk?? I hope you have! She’s rounded up sewists to take part in this year’s Refashioners challenge the entire month. I’m so honored to be a part of the Refashioners again! Today, you can see my full refashion post on her blog.

The theme is “Get Shirty”, so we were all given a man’s shirt to start off with for our refashion. Marie sent me a great and colorful Hawaiian shirt. Which was fantastic, as I’ve been wearing a lot of Hawaiian-themed items this summer! (To that end, a killer dress I’ve finished is coming soon, hint hint!) 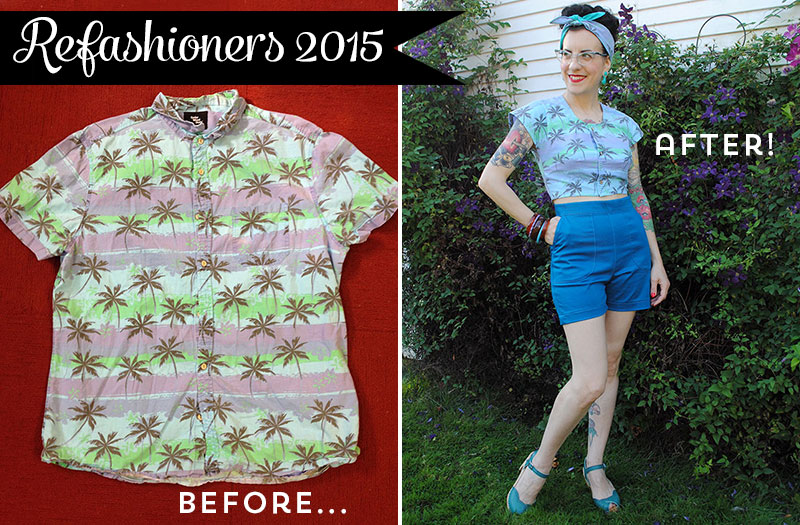 As you can see, I decided to turn it into a cropped top for summer (and I’m not the only one who had this flash of brilliance! 😉 ). I used a pattern I’ve used in the past, McCall 6116 from 1945.  So it also ticks another item off my Vintage Pledge goal for the year (nor was I the only one there, either!). I committed to 5 #vintagepledge items and have sewn 2 that I’ve blogged so far (a sleeveless top and flannel skirt), with one more unblogged (yet!). The pattern isn’t actually for a cropped top—it’s just the bodice from a vintage dress pattern! Which I’ve sewn twice before as dresses. 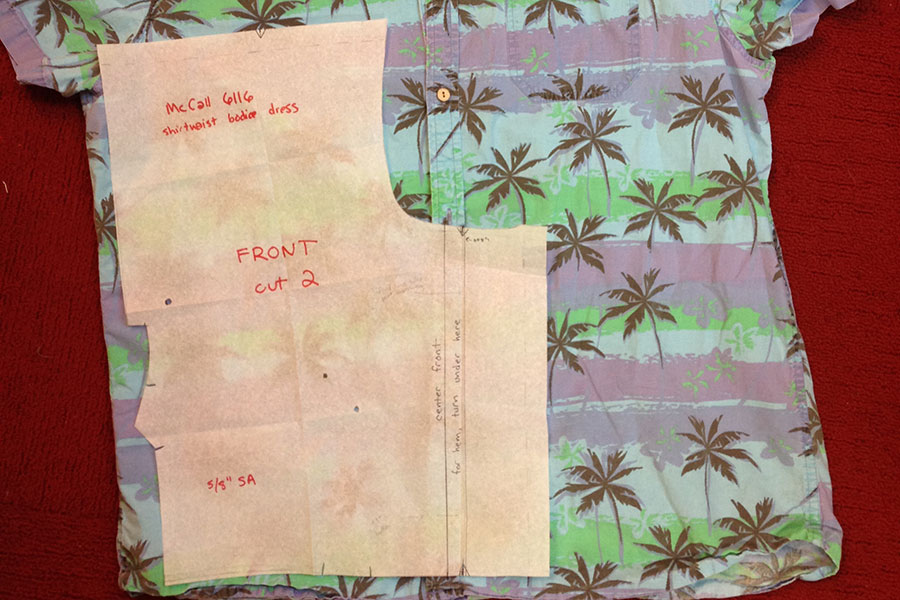 I first had the idea to turn the pattern into a cropped top last summer, which I never blogged about, but you can see below from our trip to the Renaissance Faire last year. It was just made up in a simple turquoise cotton. 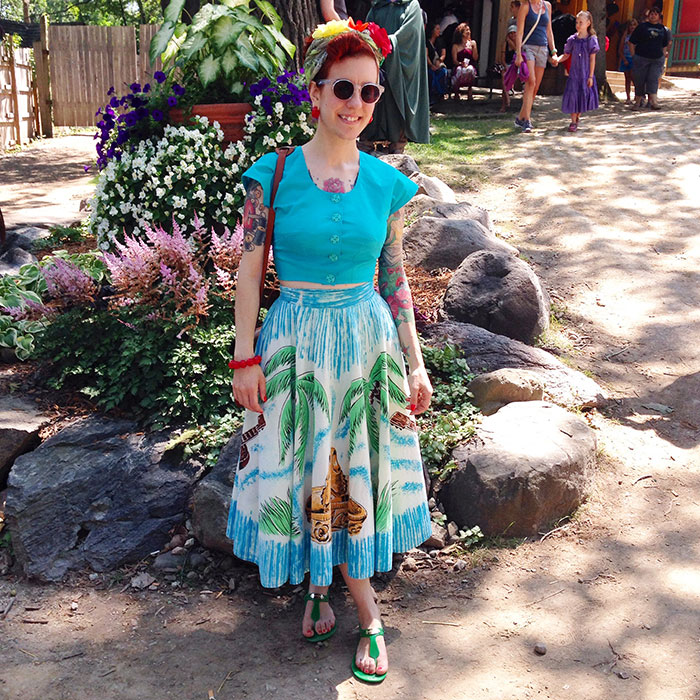 So I knew I could do it again, should everything fall into alignment (literally and figuratively) with the refashion shirt. I talked about it more on Portia’s blog, but it was a bit of a bear to get it all to work! I retained the original button placket up the front, and finished the neckline and hem with bias tape.

I used the remainder bits of fabric to make a simple headband. Umm now that I think about it, I’m pretty sure the reverse turquoise side is leftover fabric from last year’s cropped top, ha ha!

I also had to make a pair of resin earrings to match. They were cast in molds I made from vintage pieces, something I’ve really been enjoying doing lately. 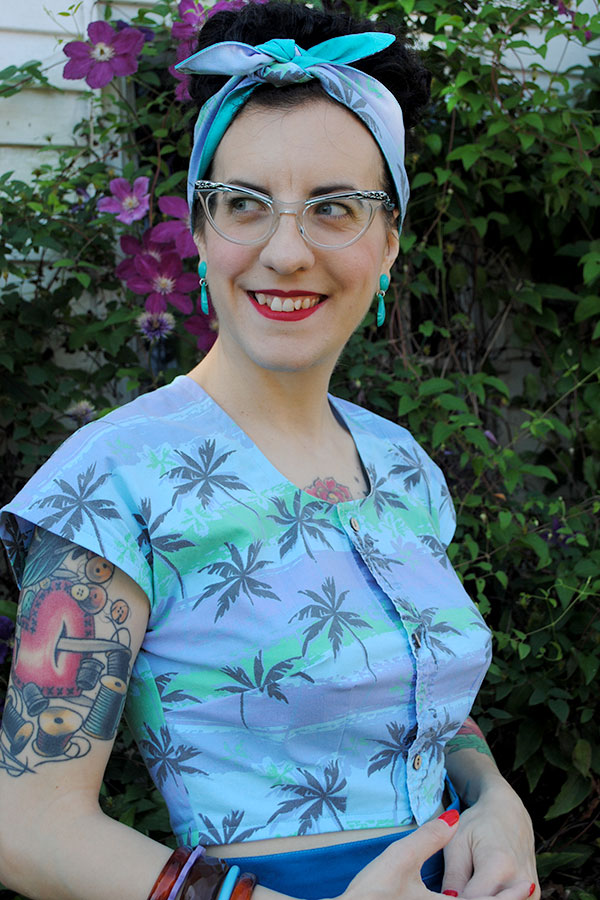 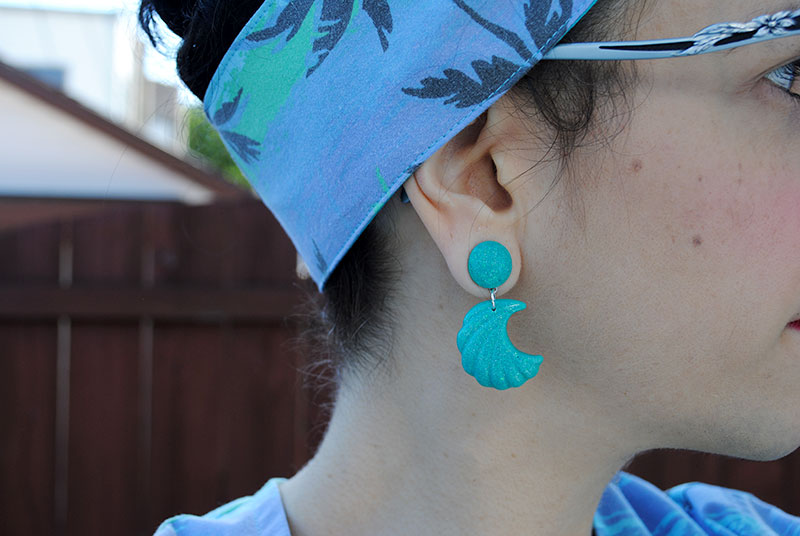 The shorts? I made those too but you’ll only get the details about that here, since they weren’t part of the refashion! 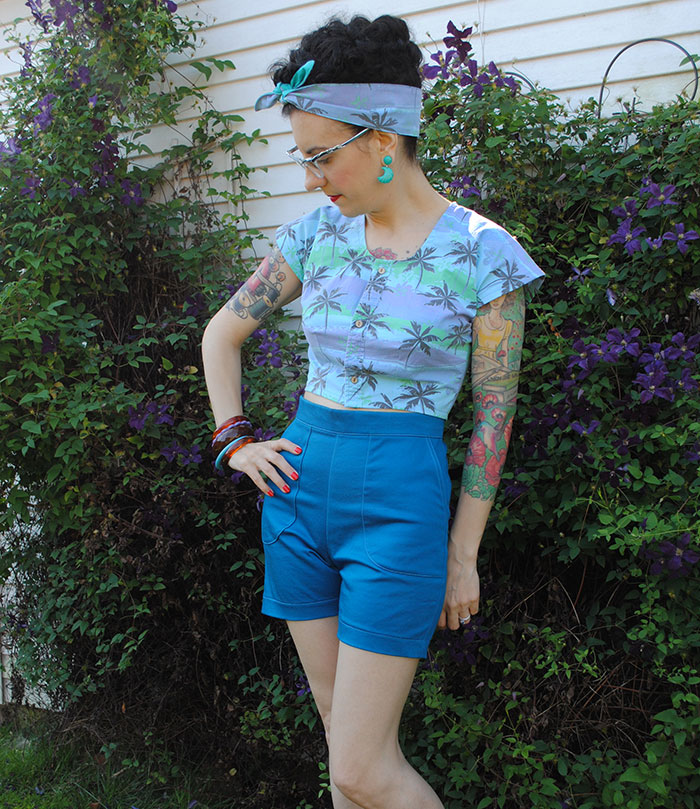 When I finished sewing them I instantly thought I was going to give them away, as they just felt a bit too tighty and pinupy for my general taste. Which is absolutely zero surprise at all, seeing as I used my often-sewn cigarette pants pattern, Butterick B5895, as the base, and the only thing I changed was giving the leg a slight bit more room. So really, I’m just a dolt for being surprised at how they fit in the end. Of course they’re tight! Hello! 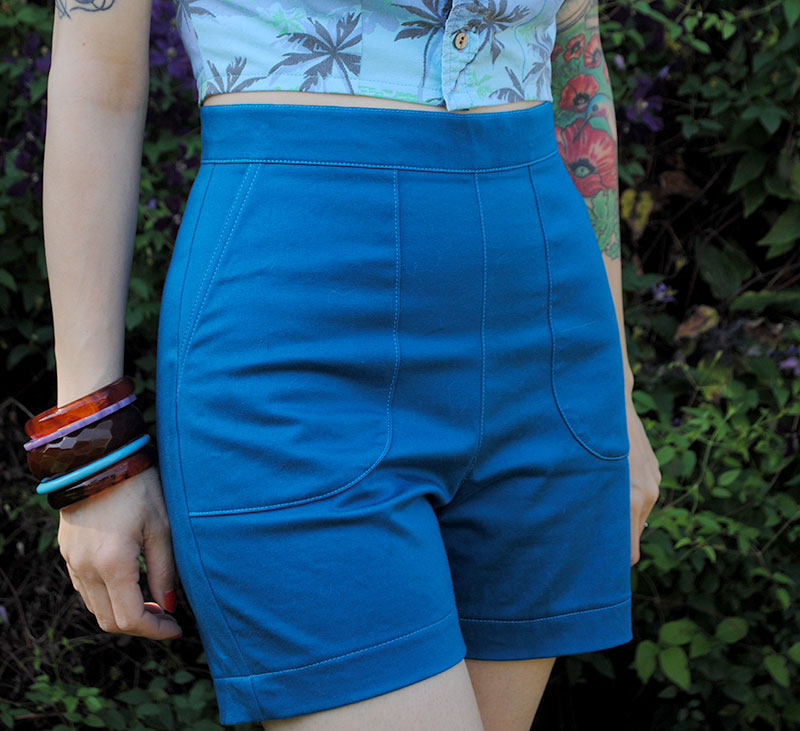 If you’re familiar with the pattern, you’ll see I made a major construction change to the front pockets. The pockets you see are actually patch pockets I drafted, although they’re finished inside the side seam. I got the idea from a pair of Freddies of Pinewoods shorts I have. Once I had the shape figured out, I interfaced the slash side of the pocket before turning it in twice and doing two rows of topstitching. Then I carefully basted the seam allowance under on all the sides (except the side seam), pinned them to the shorts, and topstitched them down. Then the side seam of the pocket was just basted to the pant leg and finished together with it when I sewed the side seams.

Since I didn’t have any topstitching thread that matched, and I find the triple stitch on my machine too slow for any serious amount of topstitching without making me want to go a bit batty, I just threaded my sewing machine with a spool and a bobbin of the same thread and sent them through the machine and needle eye as one. I only had one or two tiny areas where the tension was a bit off and I had to fuss around, but not more than you get with topstitching thread, and it was a great backup solution in a pinch! I used this method all over the shorts and I’m really pleased with how it looks. Pops like topstitching thread does. 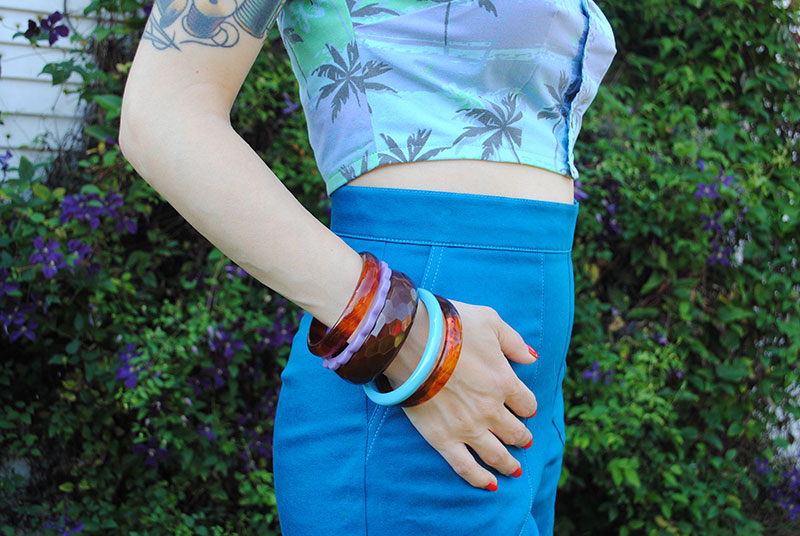 About a week after finishing these shorts and feeling very humdrum about them, I tried them on again. I’m kind of coming around to them. Yes they’re very pinupy, so I doubt I’ll wear them out and about much. But I also made them in a stretch cotton sateen (Robert Kaufman Vera sateen, I think the colorway is Azure), so they’re super comfortable! And now that it’s been a million degrees in the last couple of weeks, I actually have reason to wear them.

While I’m still planning to make more shorts from the less-fitted Simplicity 3688 (the swing trouser pattern everyone including me loves), and I’ve already done up my muslin for them, I will still wear these ones sometimes, even if it’s mainly knocking around the house. 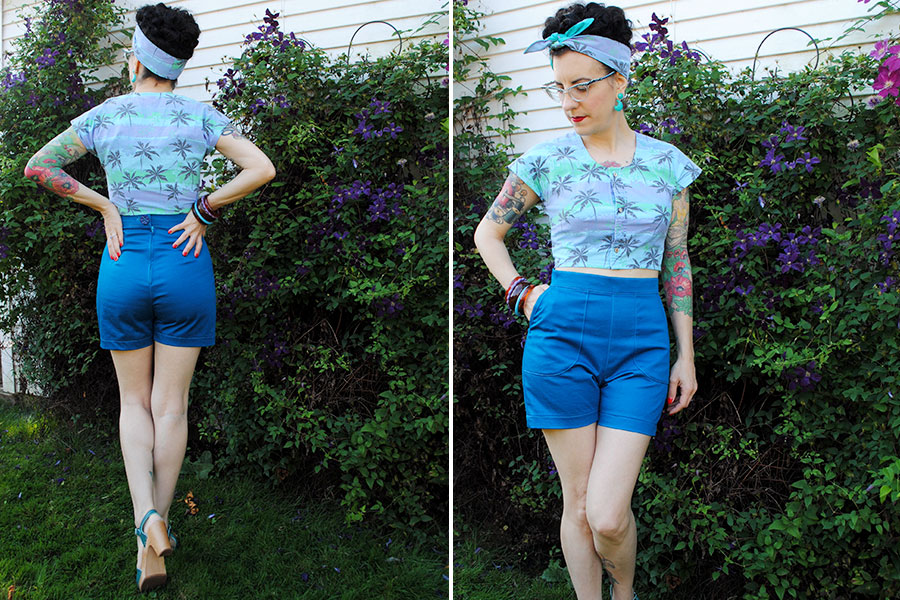 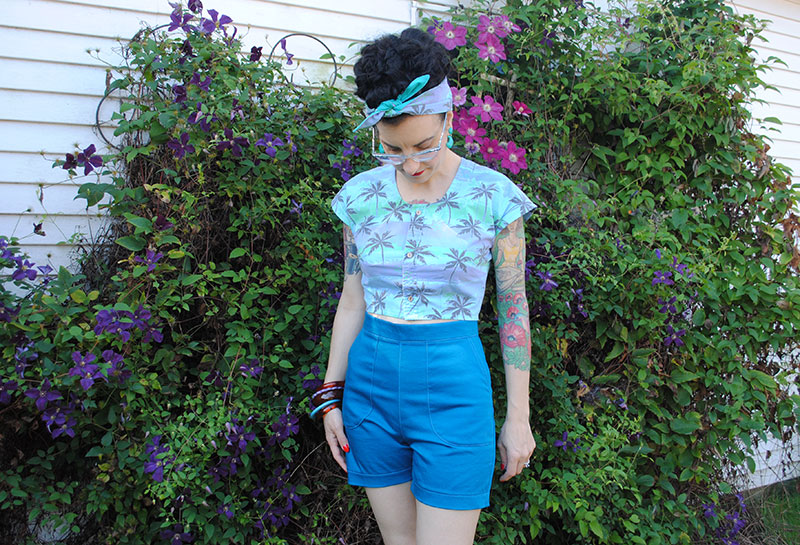 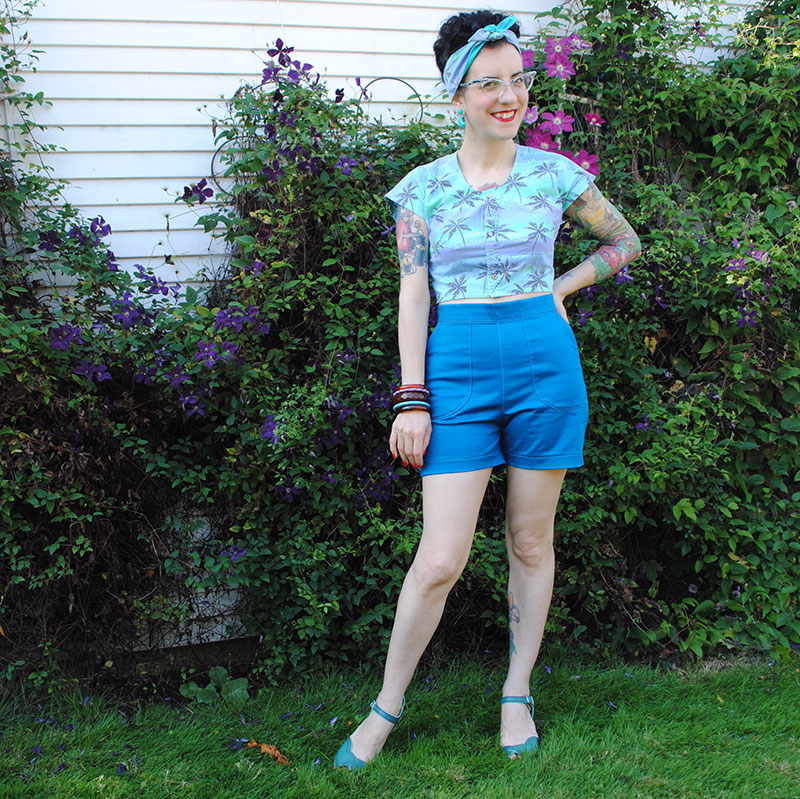 refashioned shirt and headband: made my me (full post on makery.uk)
shorts: made by me
earrings and purple scalloped bangle: made by me
Bakelite bangles: misc.
shoes: Swedish Hasbeens

So that’s the scoop on the shorts and a bit on the top. To read more about my Hawaiian shirt #vintagepledge refashion, pop over to the Makery!

Be sure to check out all the great refashions the have been cropping up this month and keep following along, they continue all of August! And pssssst…. if you’d like to get involved too, there’s also a community challenge with a truly gigantic prize package. Be sure to take a look! 😉