Thank you all so much for all your comments and suggestions on my post about my pants fitting struggles and seemingly endless cycle of muslins to try and fix the bagginess at the back of my thighs. I really appreciate your thoughts, helpful ideas, and commiseration.

After my post, I mulled over all the suggestions, did more research, and started to try out some new adjustments on one of my previous muslins (the ugly green stretch twill version that I showed you sans zipper). It’s amazing the things you can learn about how your body is shaped when you delve into adjusting pants.

First, to sort out one issue without tinkering with others, I did a full butt adjustment. Reader Lauren send me a link to a video goldmine: a Silhouette Patterns recorded webcast on jeans fitting. While what she explained about the back of the thigh didn’t help me, she did an adjustment on a live person to fix the waistband dipping down at the center back (at about 10 minutes in). Oh my goodness, let me tell you, that was SO enlightening seeing that adjustment done on someone! Sometimes I find the concept of what an adjustment is actually doing difficult to grasp, so this was perfect for me to see. (There’s also a pants fitting webcast reader Desedera pointed out and I now want to watch that, too.)

I took what I learned in the video, slashed up my muslin, and gave myself, well, a butt smile. I discovered at the widest at center back, I needed about 1.5″ extra fabric to get the waistband in place (not quite level in the below photo, but you’ll see it level later on in this post). This worked like a charm. One problem fixed! 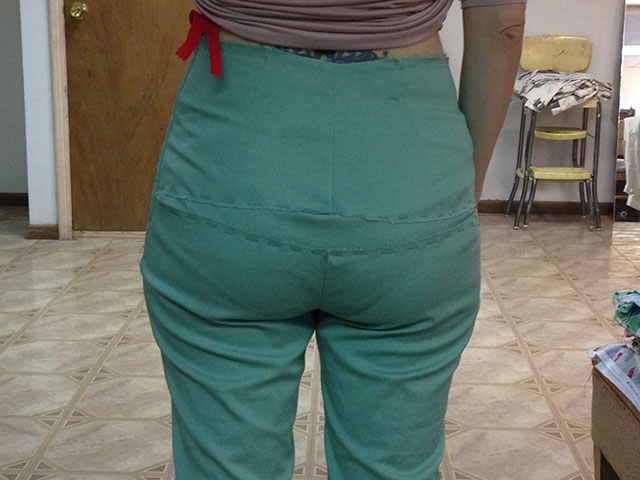 So then I proceeded to the thighs. I played with three things a bunch, trying to come up with a magic combination: the depth of the back crotch curve, the scooped out shape of the back crotch curve, and the width of the back inseam (never at the same time of course). All of these I was able to tinker with on an actual muslin by taking in and letting out basted seams, which was nice, since it meant no more new &^%#$!#@ muslins. Because no. Not again at this point.

But it never felt like I could reach a perfect combination. Lowering the crotch curve helped a little, but too much and it felt awkward between my legs. Deepening the scoop of the back curve seemed to help a little, but doing it too much made the fabric feel like it was cupping my butt in a really weird way. And in neither case could I ever hit upon a way that actually made the wrinkles directly under my butt disappear.

I also took in the back inseam a variety of widths. The more I took in the tighter the fabric was (obviously) pulled across my thighs in the back, which helped somewhat, but I didn’t want to pass the point where they became skin tight on my thighs, since I’m not going for quite that tight here.

Here’s one view when I had the plain left leg with the tinkered with right leg. I did my back inseam alterations to only one leg at first so I could easily compare. I have no idea at what point this was, but you can see the right leg looks a bit better. 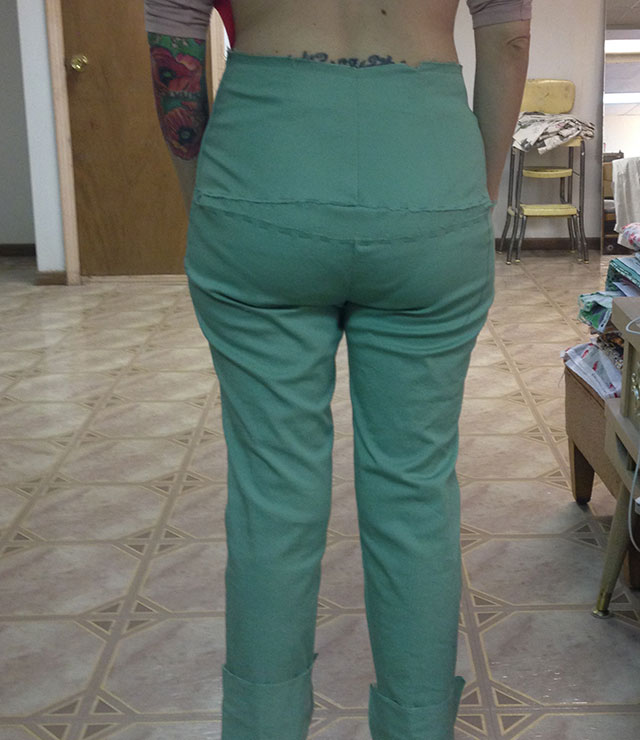 Somewhere in here, I also tried an adjustment suggested to me by Rebecca, who noticed it looked like I may hyper extend my knees. She’s totally right, because I actually knew I did this sometimes. This (along with large calves, which isn’t an issue for me) can cause fabric to kind of bunch up above your knees. I thought for sure this adjustment would help, but in the end, I decided not to do it. It helped a little bit with the lower thigh wrinkles, but it swung the side seam towards the front, where it had been perfectly straight down my leg before. Although in looking at the below photo again, perhaps I’ll try a smaller one in the future. 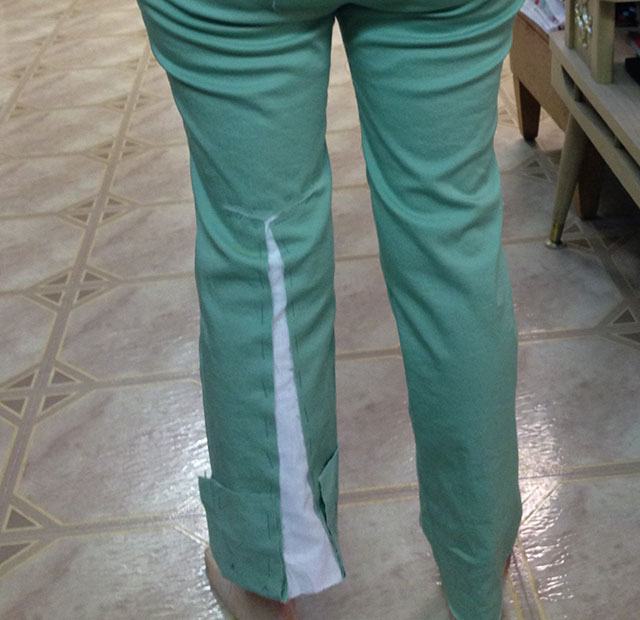 I also tried a bunch of other things I didn’t photograph, like taking a horizontal tuck around each thigh (didn’t fix it) and taking a horizontal tuck around the front and back at the lower part of the crotch (didn’t fix it). Ultimately though, I decided I had to just stop and transfer the alterations I felt made a bit of difference onto the back leg pattern piece, and sew them up in fabric and see what happened.

Here are the alterations I settled on, with a photo of my new pattern piece below. For reference, I did these alterations using the same size as my red stretch twill pair, which was an 8 waist and leg, graded to a 10 at the hips. There were no previous alterations to the pattern pieces other than that and the lengthened leg.

And here’s how that translated to my back pattern piece. The green line is the original line, the pink line is my new line. My full butt adjustment is the yellow wedge.

It’s amazing when you look at it how little difference it really looks like (aside from the added wedge which tilts the upper half of the torso). 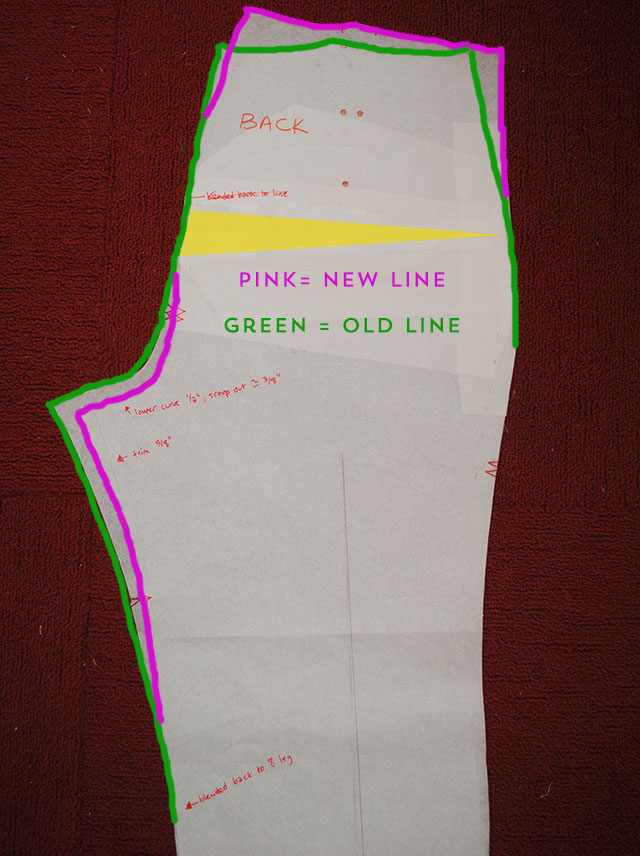 I then used my new pieces to sew a new pair in a stretch denim that I got from Denver Fabrics. It’s not black like the description says, but a great dark, dark blue. Now why I was suddenly possessed on the night before Thanksgiving and decided that I absolutely needed these denim cigarette pants for Thanksgiving is beyond me. But by 1am Wednesday night (would have been a lot sooner if I hadn’t had to rip out a crotch seam and inseams and cut new back pieces due to my aforementioned adjustment error where I tried to put my butt on my stomach), I had new pants.

Right now, you’re going to have to make due with these quickie photos. We took photos on Thanksgiving and each of the two subsequent days I wore these pants (which will show up in a post soon), but you can’t see the pants at all in any of the photos. So this as good as it’ll get until I wash them and can take some photos in decent lighting. 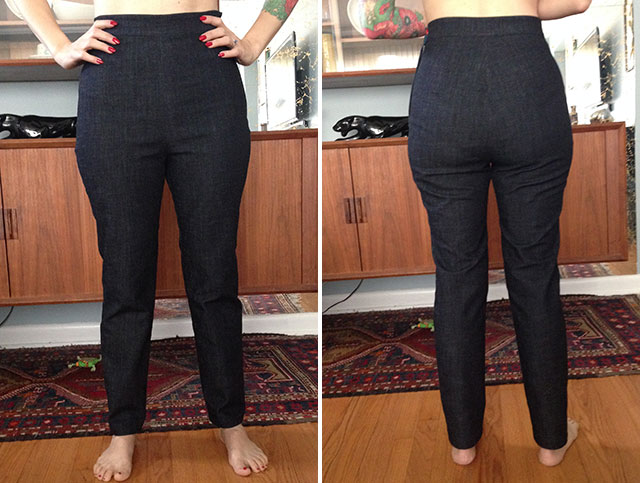 I think we can all agree these are pretty rockin’. Don’t you think they look good? Not a huge difference, but enough that I feel pretty happy about it. Any they’re not so tight that I look poured in or they look like leggings, and not too loose for what I was envisioning in my head. Here’s a side view for you, too: 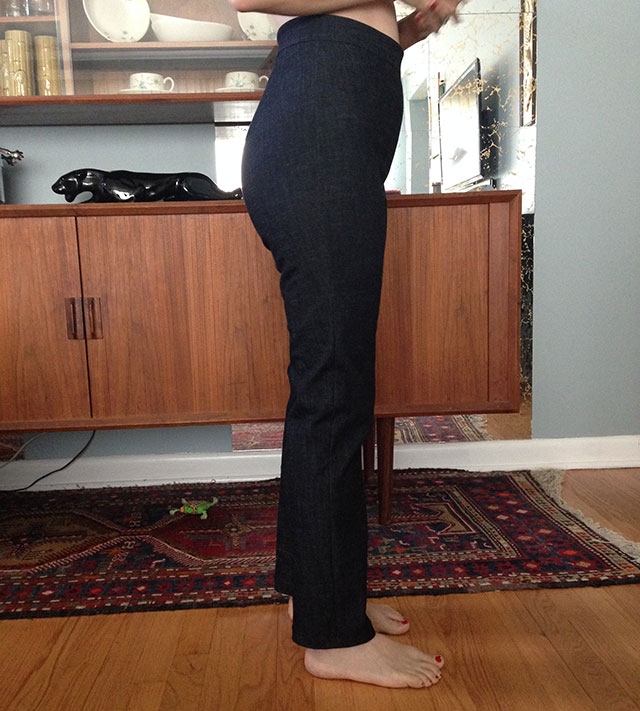 It’s hard to say for certain how much is dumb luck due to the fabric (which may be part of it, because the wrinkles directly under my butt seem to just be horizontal, not come down at a diagonal angle from the side seams like in the muslin), and how much due to the new alterations I made. Only time and future pairs will tell. But I really love these pants. So much that I wore them 3 days straight, so I can now confirm that after about 3 days, the stretch denim starts to bag out a bit, but that’s expected with a stretch woven. And they made it through Thanksgiving without getting crappy looking, so I’d say that’s a pretty good test. I saw Denver Fabrics is currently running a 20% off sale until December 8th, and I’m actually tempted to buy more to make a backup pair, I love them that much.

Yeah, the fit is still not perfect, and my rear end adjustments have caused a bit of ‘whiskering’ on the front crotch. They fit at least as good—if not better—than RTW pants fit me in the back. And it’s not like I’ve been able to find RTW vintage-style cigarette pants to buy anyway (because I probably wouldn’t have gone through any of this if I could have, and that’s the truth). So I think I’m at the point where I’m ready to say I’m done with fitting these, and go ahead and keep sewing them like this, unless/unless I decide to make future changes. But right now, it’s time to step back and just stop and call this mostly a win.

Eventually these will show up in a post in better light, but for now you’ll have to make do with the ones above and the below (a reject photo for a future post) which is lightened up considerably, but hey, at least you can kind of see them in action in real life as I was wearing them over the holiday weekend. 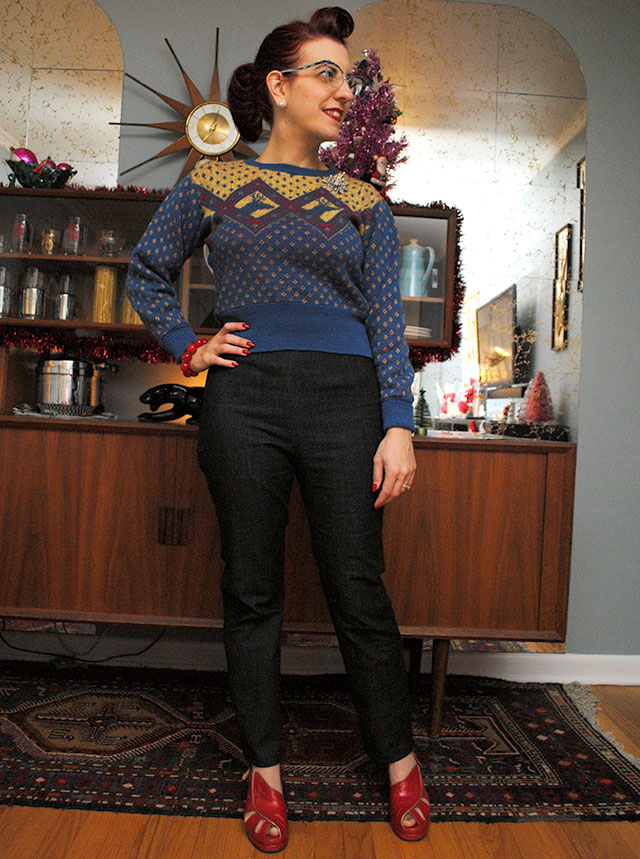 Although you may not see them again until I sew another Jenna cardigan in some super awesome fabric I got from Spoonflower after my initial inspiration to make a printed cardigan with denim cigarette pants. I’m halfway to that outfit. Stay tuned!