Many of you who regularly set your hair for vintage hairstyles have read about getting a permanent wave, or have even gotten one yourself. I think the first time I read about someone getting a perm in order to help vintage sets hold was Fleur de Guerre, a few years ago.

Those of you who aren’t familiar with vintage hair in conjunction with perms might be thinking it’s 1985 all over again but fear not. It’s more like 1942 all over again! 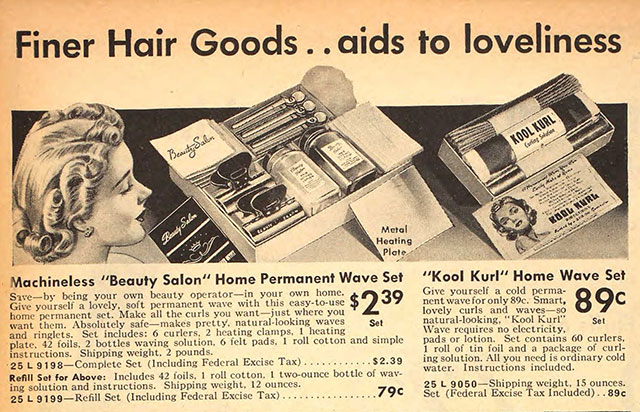 So I finally got around to getting a permanent wave! The amusing thing is that it must have seemed so obvious for me to get a perm that when my stylist, Angelica (who knows all about vintage hair) was putting in the perm rods, she actually thought she’d given me a perm before! Angelica is awesome, and is the owner of Tigerlilie Salon in Chicago. (She does great pomps too—Mel and I have both been going to her for years.)

I wanted to get a perm to see how it would help out my hair setting process. Well not the process itself, but the outcome. That’s the thing, a perm isn’t meant to replace the setting process, but to help your sets last. Now I wasn’t sure how that would actually work for my hair… and it’s not been long enough for me to fully report back either, but I’ve documented my first week with the perm.

You’ll now see a whole lot of unflattering photos of me! This is what happens when you take photos a bunch of different days but don’t actually bother to check any of them until it’s too late. Oops.

My hair is pretty fine but there’s a decent amount of it. It has a very faint natural wave but a really wimpy one that brushes out almost instantaneously, and I have pretty much no natural volume to speak of. When I went in on Friday I hadn’t washed my hair in two days and had not set it nor put any products in it. Here’s what I looked like going to the salon:

Here’s the perm rods in my hair at the salon. Great look, right? Maybe I should start going around like this every day… 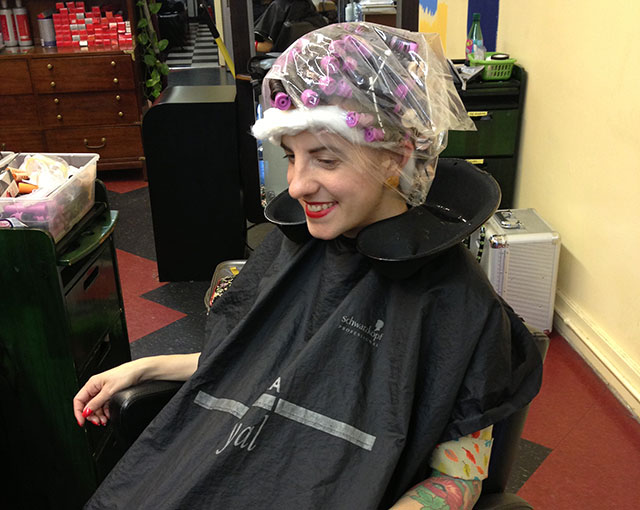 Keep in mind that my hair is color-treated. I used to dye it black using permanent dye, and it had been semi-permanent dyed since that point. I had pretty crazy roots (and grays) to begin with, and knew that the chemicals from the perm would strip out some of the color. It didn’t pull out any of the permanent black but pretty much all of the semi-permanent dye, so my hair is a bit more two-toned right now and will be for awhile as I grow out the dye. So in some of the following photos you may notice how much lighter the hair towards my scalp is. (My natural color is kind of a medium brown.)

So here’s the result later that night! A permanent wave, and a good bit more volume, especially on top. This was blown dry slightly by my stylist, then left to air dry. The photos were taken several hours after I left the salon.

But of course, remember wearing my hair “normal” wasn’t really the ultimate goal. You can’t wash or set your hair for a couple of days after, so this is what my hair looked like for the whole weekend. By Monday, I could wash my hair. Part of me felt like my hair was going to go completely back to normal after the shower but nope! Here’s my hair straight out of the shower.

I let it mostly dry as I normally do and then set it exactly the same way I normally do (see my everyday roller set post). I expected the results would look pretty much exactly the same as normal, and they did. These photos below were taken in the evening, and I’d taken out my rollers that morning. A pretty typical look for me, you’ll probably agree.

Those photos above were taken Tuesday evening. I didn’t set my hair back in rollers that night, and the following morning my hair looked pretty much the same but messier and with a few droopier curls. So of course I had to brush through it, which did destroy some of the curl. I was left thinking I’d probably still need to put rollers back in every night if I wanted optimal results. I was hoping to avoid that, but an interesting thing happened the following day.

To see what would happen after night two of sleeping on my hair as-is, I didn’t put in rollers Wednesday night, either. And here’s my hair Thursday afternoon. I brushed it Thursday morning again as normal, put in combs for several hours, but then later took the combs out and brushed it again before taking these photos.

So this is technically Day 3 on a roller set, without putting in rollers again.

In these last two photos you can really see the hair color difference between the dye that didn’t lift and my natural hair. Eventually it won’t look so jacked up, but give me some time. 😉

Yes, that may not be the most amazing looking hair, but I think it’s presentable for a casual vintage look considering it’s day 3 of rollers. It’s definitely not completely curl-free like my hair would normally be by this point if I’d slept 2 nights without putting rollers back in. (At this point my hair would only have retained some body or volume from a set, but probably no real wave to speak of.) You can even can still see remnants of the original style a bit, even though there’s some seriously wonky bits that developed a mind of their own. But not half bad, huh?

So that’s the first week of my first permanent wave. If you were contemplating getting a perm to help your vintage sets, I’d definitely say it’s something worth trying out! I’m really looking forward to experimenting more and finding out how my perm helps my hair perform in wind and humidity, two big factors where I live. Expect more on the perm front from me in the future!