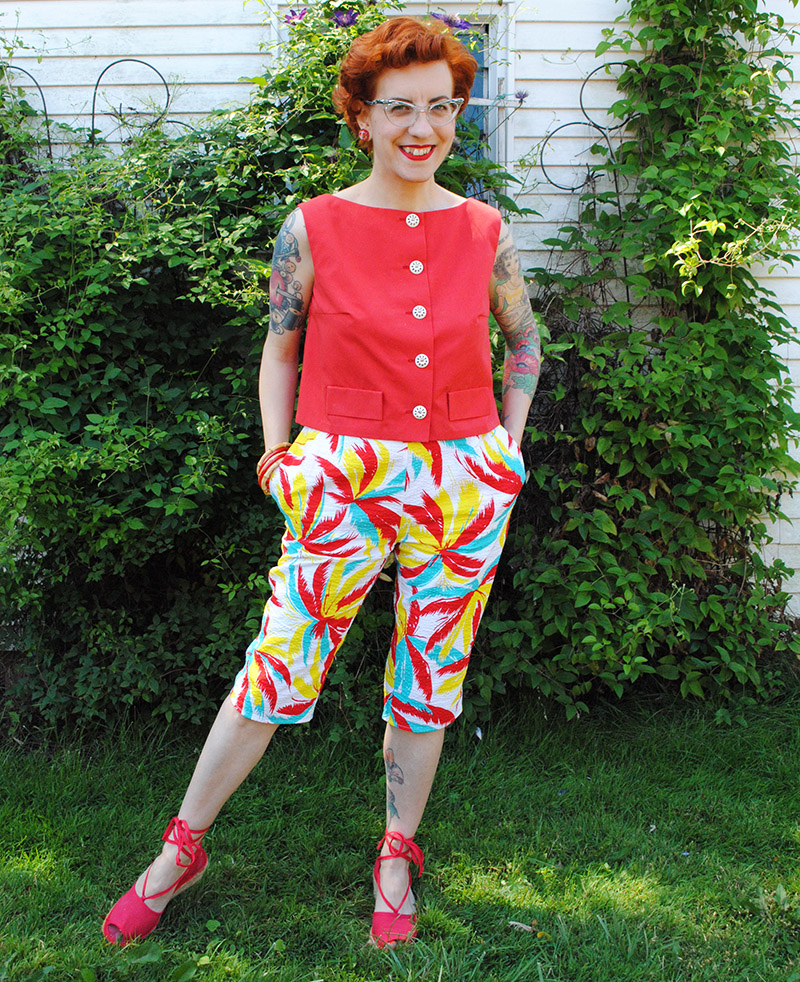 Frankly, I’m elated about these capris, even though they just appear to be a simple project at first glance. And technically they kind of are, but they signify a lot. Do you ever have sewing projects like that, where the project itself has a much more far-reaching impact than just the item you sewed?

In this case, what it means is that I’ve both worked out a sewing problem I’ve wanted to tackle for ages (well not a problem per se, as I’d never gotten around to trying it yet), and I now have a casual fit vintage trouser pattern that I can use as a launching point for capris, jeans, trousers and shorts. Both are things I’m really, really pumped about. So this one project means a lot for many future projects, hence the wider impact than a simple pair of capris might imply! 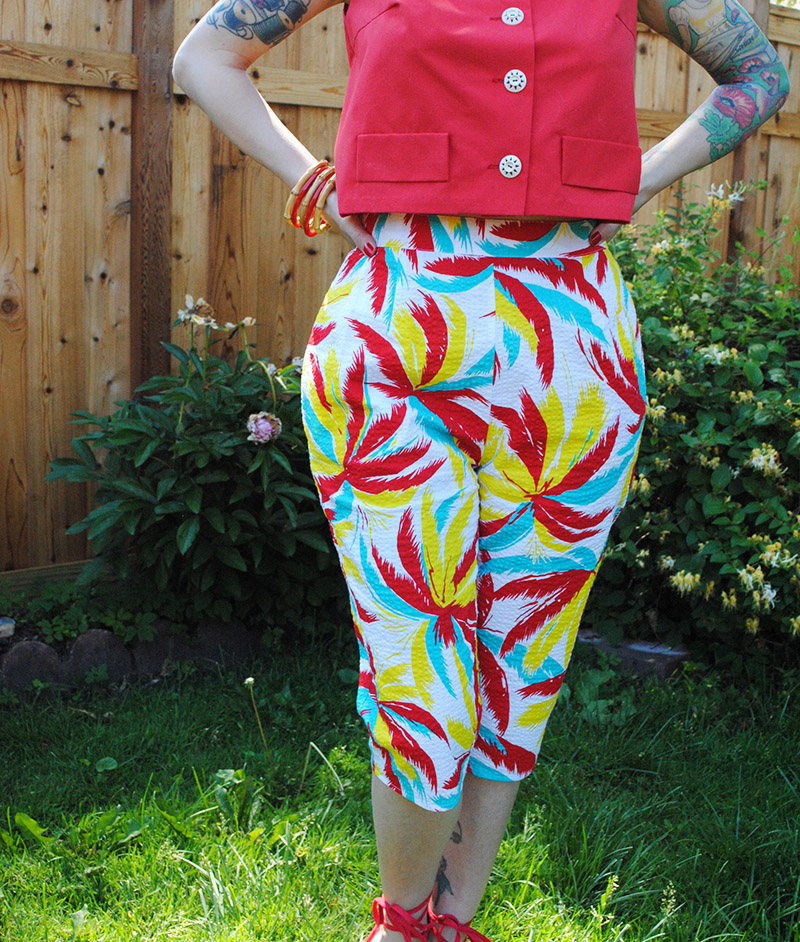 The hidden zipper in the pocket was actually a lot easier to work out than anticipated, and it only took one test pocket to make sure I was understanding things. I’m planning to do one or two tutorials on pocket zippers soon: one or two, because I haven’t decide if it’s worth rolling this as well as vintage-style slash pockets on jeans into one post, since they’re actually constructed in different ways. We’ll see. But stay tuned, as I need to mull all that over. I’m definitely too excited about this not to do a tutorial though!

Meanwhile, here’s a couple of inside looks. 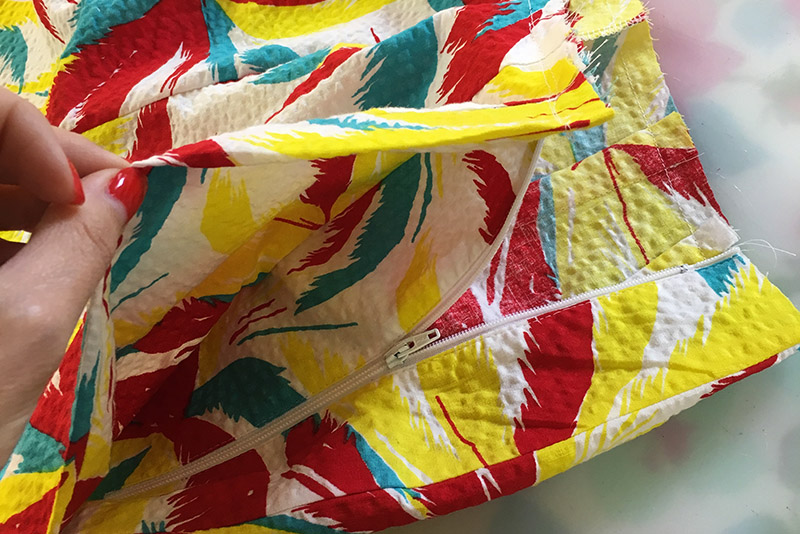 You can add a shield (it’s not a fly obviously so I wouldn’t call it a fly shield, but basically a shield between the zipper and your skin), but I literally had no spare fabric to add one as it requires lengthening the waistband. You’d definitely want one if using a metal zipper.

(Worth mentioning my pocket shape below is pretty silly… it’s because I was tracing it off jeans and not thinking about functionality so much, so obviously if I’d like anything other than my hand to stay in my pocket, it needs to be re-shaped at the bottom. Easy fix next time. 😉 ) 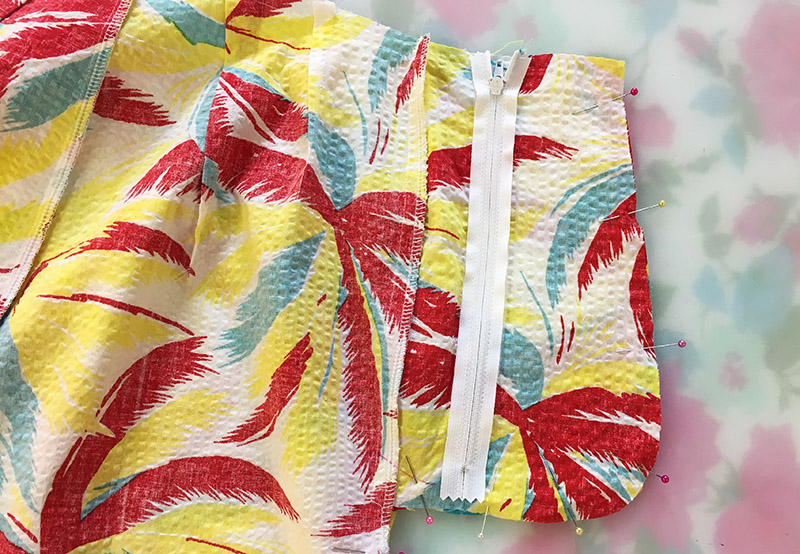 The short of the construction is that for plain inseam pockets like this, you insert an exposed zipper inside the inseam pocket piece that attaches to the back leg. And other than adding length to your waistband (and if it’s a shaped waistband, probably changing that slightly), that’s literally about it. I mean obviously, me being me, a future tutorial will come with a boatload more details, don’t worry. 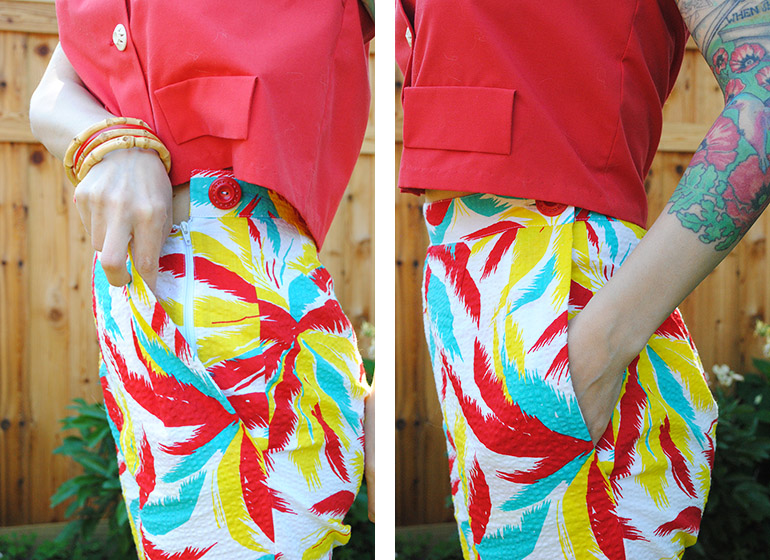 I was both shocked and delighted at the ease of this little trick. Why don’t more patterns have these?!! I mean, I know most modern patterns have invisible zippers so if you that’s your preference, there’s not really a need or desire to hide a zipper in a pocket. But vintage patterns, I guess that’s more surprising to me. It would allow a lot of patterns that have lapped side zippers and one or no pockets to have two inseam pockets.

You wouldn’t want to do these on tight-fitting cigarette pants or pencil skirts, as not only would the pockets splay out extra noticeably so you’d be looking deep into the pocket (think what RTW pants look like if they have inseam pockets and your hips are bigger than the pants are really meant for), but I suspect you might have a tough time squeezing into them. So you need some positive ease around the hips for sure.

And that’s probably the main reason I’d never tried this yet, as I didn’t have a pattern in my arsenal that fit the bill. Most (well, all) of the trousers or jeans I’ve sewn in the last few years have been pretty fitted, and I hadn’t been bothering to put pockets in my skirts lately. Now that I knew I wanted to give myself some breathing room (literally) for awhile in the pants department, it was the perfect time to try this. 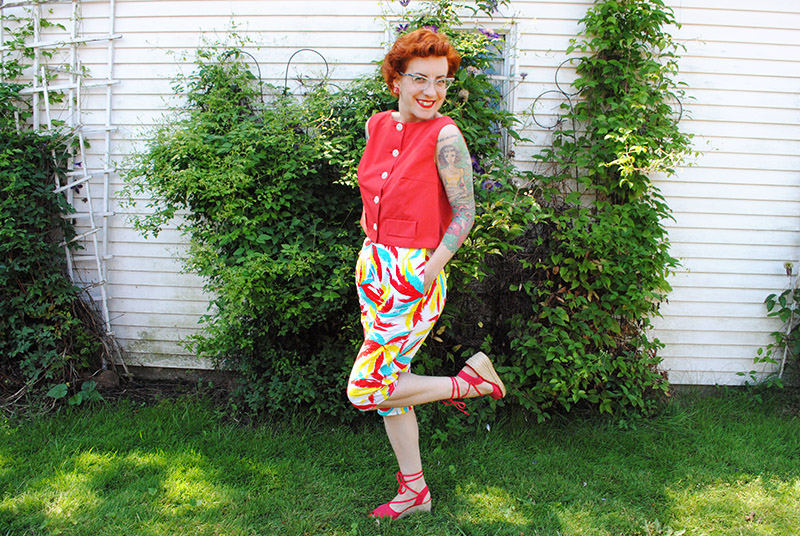 The pattern I used is Simplicity 4401, which I knew from a muslin I’d made over two years ago had a nice amount of ease (mentioned in my last post). It’s a 60s pattern but definitely a typical trouser style for the 50s, too. 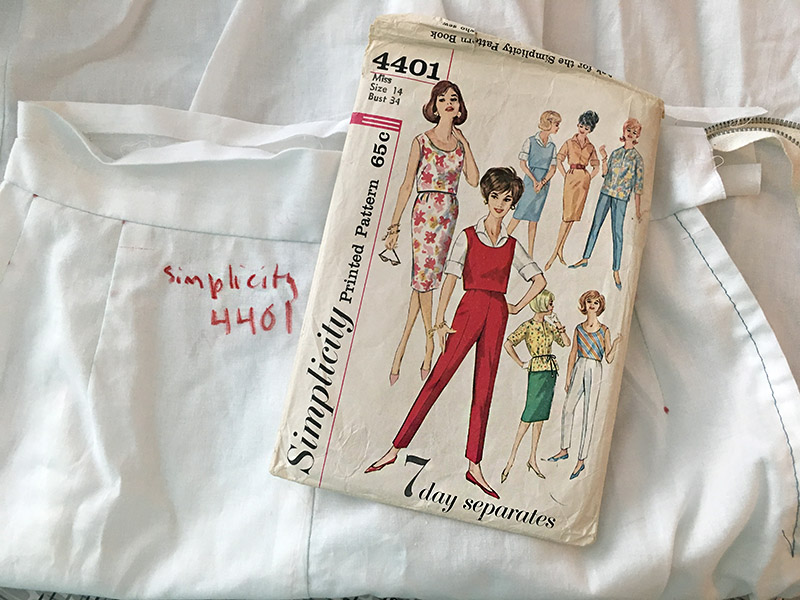 It was the perfect pattern to revisit now. I did a couple of new muslins, to try out the hidden pocket and because I wanted to both give the waist a smidge more room and fuss with the leg width and crotch curve. And I’m going to be honest with you: I did something that really only comes from having made dozens of pants, and adding in a bit of daring as well as sewing instinct, which is changing the rise kind of on the fly. I liked the fit of my original muslin, but the rise felt too long. I don’t mean it hit too high on my torso, I mean there was a lot of excess fabric between my body’s crotch and the crotch of the pants, if you get the picture. It didn’t look bad, but just seemed… unnecessarily long. Since I wanted to take in the thighs a bit, I just kind of guessed at where I wanted things to fall, took a significant hunk out of the inseam on both the front and back leg, and raised the rise about 3/4″-1″. 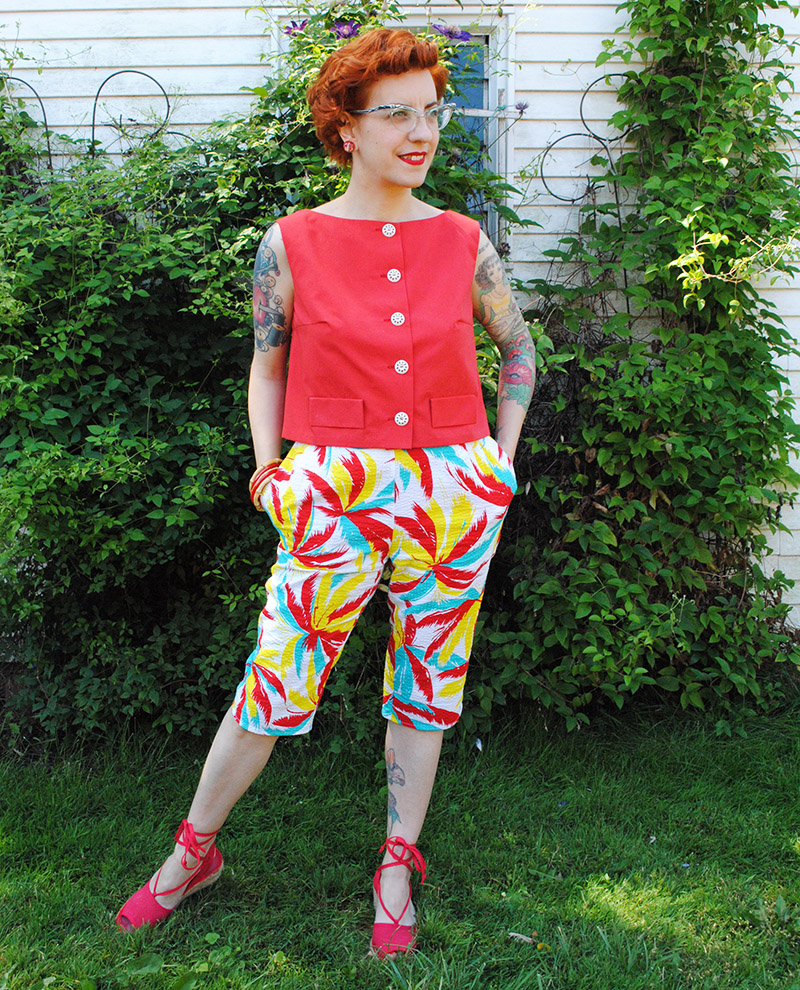 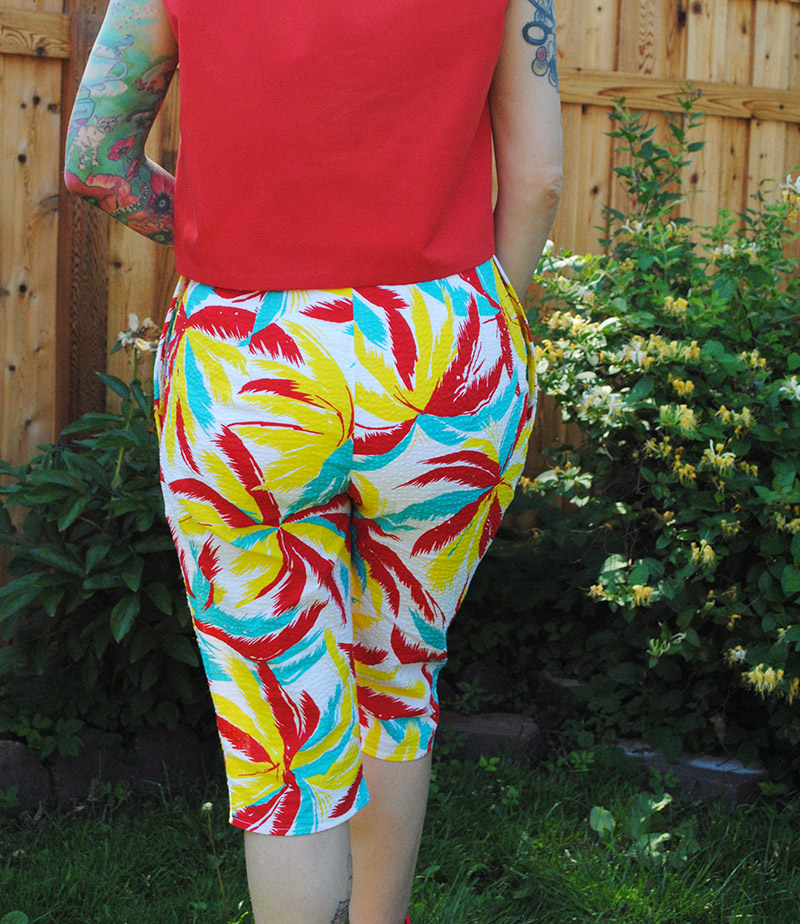 When all was said and done with the muslins, I was really happy with the fit, and the zipper in the pocket worked and looked good, too. And as a huge bonus, I thought I was going to have to use the pattern to make Bermuda shorts because I had only 1 1/2 yards of this vintage tropical seersucker fabric, but because I narrowed the leg enough, I could juuuust squeeze out some capris! I managed to fit everything including all the pocket pieces, and just had to seam the waistband at the right side. No biggie.

I should mention I’m wearing this with a 60s top I sewed several years ago when I was really just getting into vintage sewing. It’s a size too big now and the darts are way too high, but I still like it and wear it just the same. 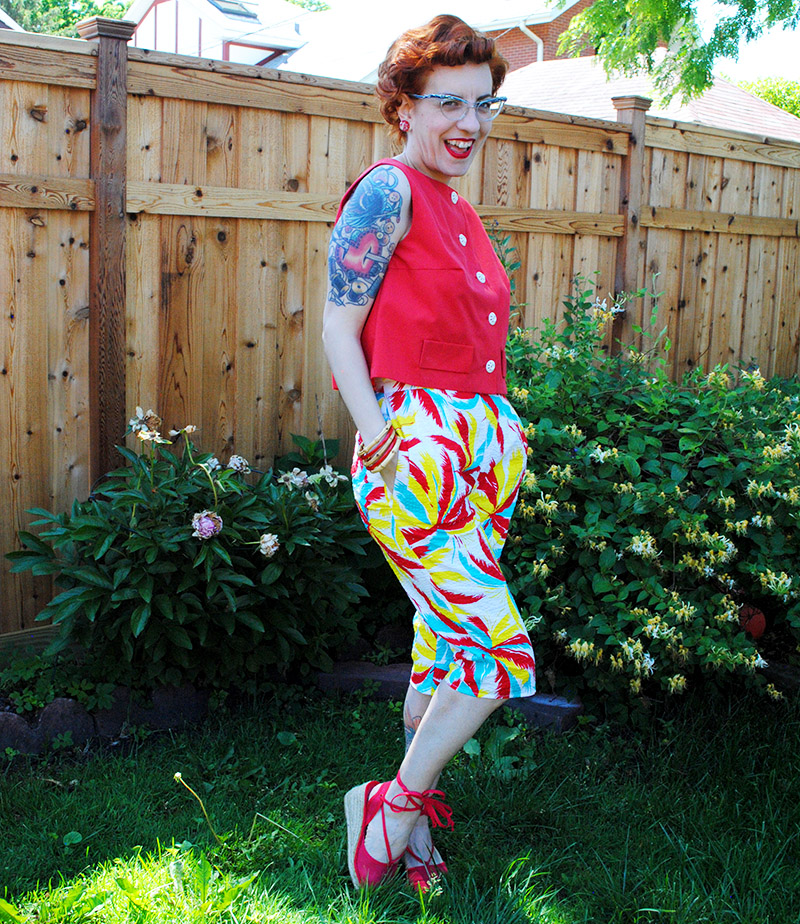 I have to say I really love the fabric I used for these capris. I’m not sure the era, but it’s a vintage piece of seersucker I got quite cheaply on Etsy. The colors are so vibrant and the print is great! It does bag out throughout the day but since the pattern isn’t meant to be super fitted to begin with, I’m okay with that. I never really gave seersucker much thought before as I’d always associated it with pastel colors and men’s suiting stripes. But it’s pretty lovely to wear these on a hot day, so I will definitely be on the lookout for more seersucker prints for summer. 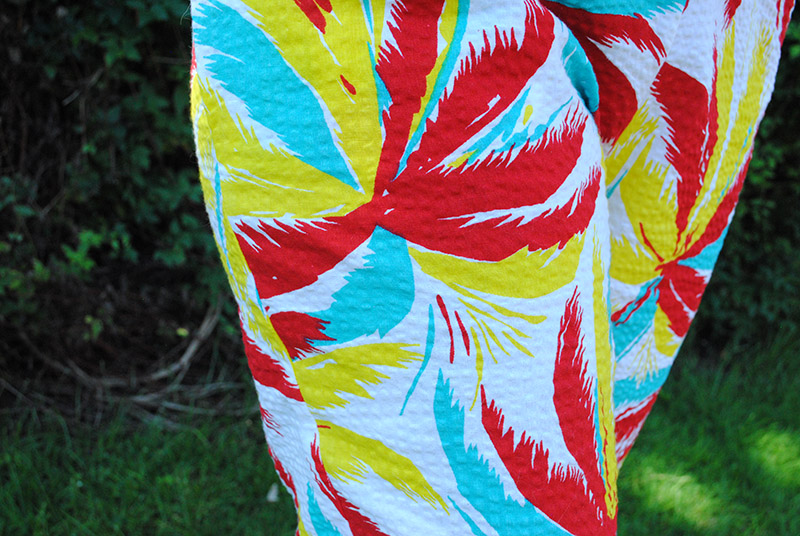 Obviously I’m pretty delighted with these capris! The only thing I might change in future versions is to narrow the leg a tad at the end, but I was worried if I narrowed them then they’d get hung up around my knee. They’re that awkward length that pulls up over your knee when you sit down, you know? I’d probably want future capris a bit longer anyway. But I literally couldn’t even have cut these 1/4″ longer, and did a teeny narrow hem as it is. So for versions with longer legs or for trousers, I’ll be narrowing it a bit for sure. 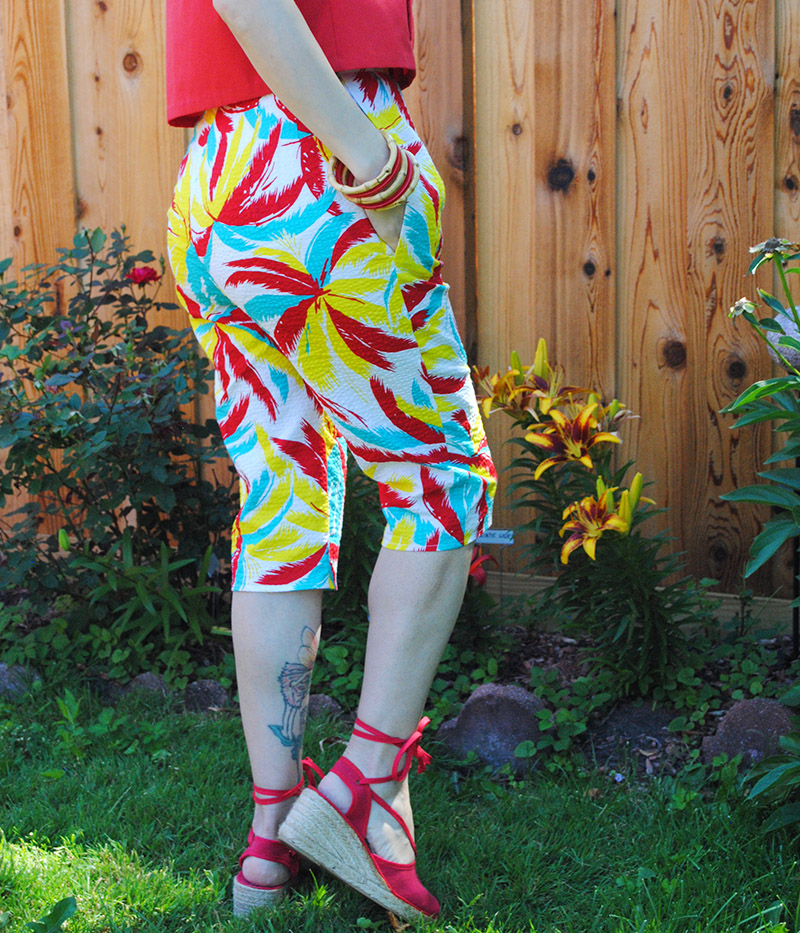 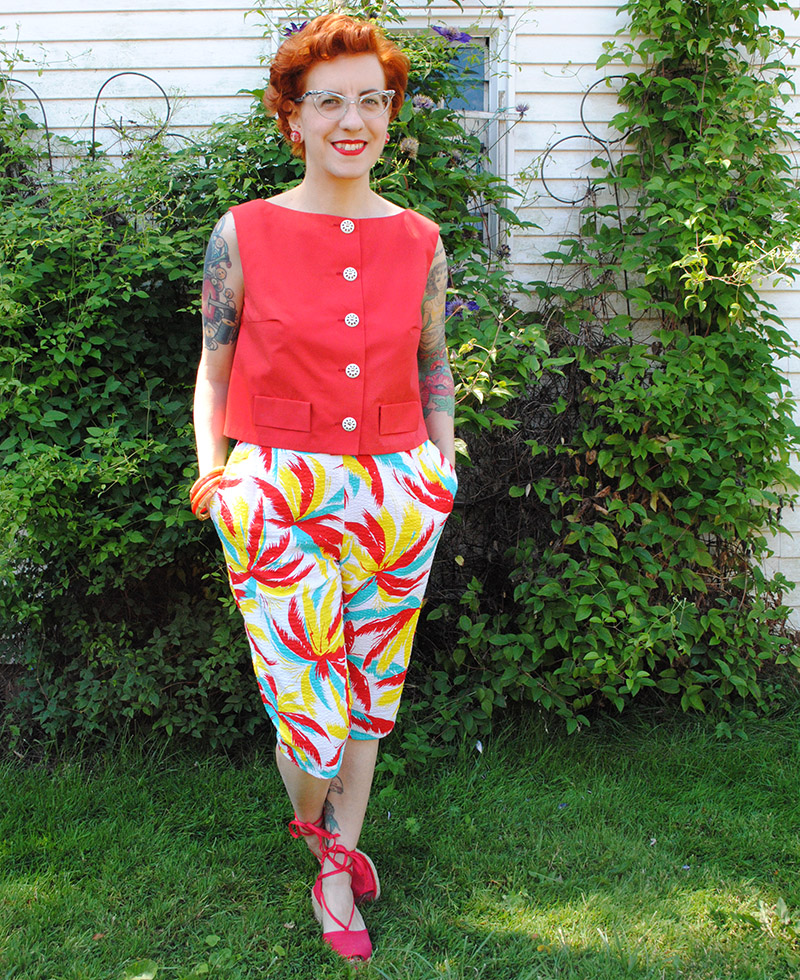 But possibly even better than these capris themselves is knowing I now have a pattern that with minor changes I can use to make more capris, or 1950s-inspired trousers that aren’t cigarette pants. I’m also in the process of making bigger changes to turn this pattern into one for a pair of vintage jeans. Easier said than done with the changes (like drafting out 8 damn darts!), but after four muslins I’m now onto the denim. Which means pretty soon three of my goals from my inspiration post will be a reality (50s jeans, hidden zipper in pocket, capris).

And hey, if I do nothing else on my list this summer (like I’m totally queue jumping to make a 70s-does-30s version of the new Closet Case caftan pattern Charlie in tropical rayon for a beach pajama vibe), I’ll still feel pretty accomplished! 😉