Hello, friends! No 2016 roundups or 2017 plans from me, although this is my first post of the new year. There’s so much crap going on in the world that it’s still sometimes difficult to focus on seemingly inconsequential things like sewing and knitting when you want to tear your hair out at the madness of it all. But when those things bring you great joy and pleasure and ease stress, to help balance out other things or provide a much-needed distraction, then I guess they aren’t really so inconsequential, are they? And now that’s the extent of the year end/beginning navel-gazing you’ll get from me. On to some maybe-not-so-inconsequential-after-all sewing.

Early in December, I did a muslin for the Clare coat I was planning to sew. I was so excited, but it was a big fail. Ugh! I’ve seen many lovely versions, and the muslin was promising except for a couple of major areas that I just didn’t/don’t currently have the patience to power through: while I sewed my size as indicated by the chart, the raglan sleeves should be roomy and weren’t at all, and the underarm was horribly constricting for anything but the lightest of clothing under just the cotton muslin. I knew there wasn’t a chance in hell I’d fit a sweater under, let alone Thinsulate interlining for the coat, and a pretty thick wool fashion fabric. I mean I should have probably thought to go up a size since I knew I was interlining it, but that being said, the fit would never have worked for me even with a thinner fabric and no interlining. Not in any way I’d consider comfortable, at least.

This was all somewhat perplexing too, as I have thin arms and narrow shoulders, so I wasn’t expecting it. And the torso fit well (well, darts were too high but this is typical for me). I guess I should have sized up, in fact maybe even 2 or more sizes (an FBA alone certainly wouldn’t have cut it as the constricting bits were mostly above the fullest part of my chest), yet I cut the pattern tissue to my size instead of tracing like I normally would (because it’s sooo tedious tracing the bajillion pieces for outerwear). Frankly, I just don’t feel like trying to figure that all out right now. I’m left with grading it up or tweaking the fit myself—and I’m not very familiar with fitting two-piece raglan sleeves—or else purchasing the pattern again and hoping a larger size it better. So, I’m bailing on Clare right now. I’ll try again in the future with some other fabric! I still have some mustard cashmere blend that’s gorgeous and more lightweight, so it might be better suited for it, though I will still have to tackle the weird fit issues. But it would be beautiful in that fabric.

Instead, right now, I still want to use my gorgeous black bouclé wool for another coat, but this time I’m going to use a vintage pattern! Which of course comes with its own set of issues and challenges, but that’s part of the puzzle and fun of this type of mega(ish) project! (By the way, this time last year I wanted to sew a vintage hooded swing coat… which got pre-empted by my Cascade duffle coat. Well I still have the fabric for that and definitely still intend on doing that project someday, too. But this one first!)

These three are basically the coats I’m selecting among. And it’s possible I may try to mix-and-match a bit! I’m definitely doing a somewhat shorter length, about at my knee or maybe a bit shorter, but I will decide once I do a muslin.

I really like the idea of raglan sleeves like Simplicity 1286, but I prefer the more dramatic collar of 3630. 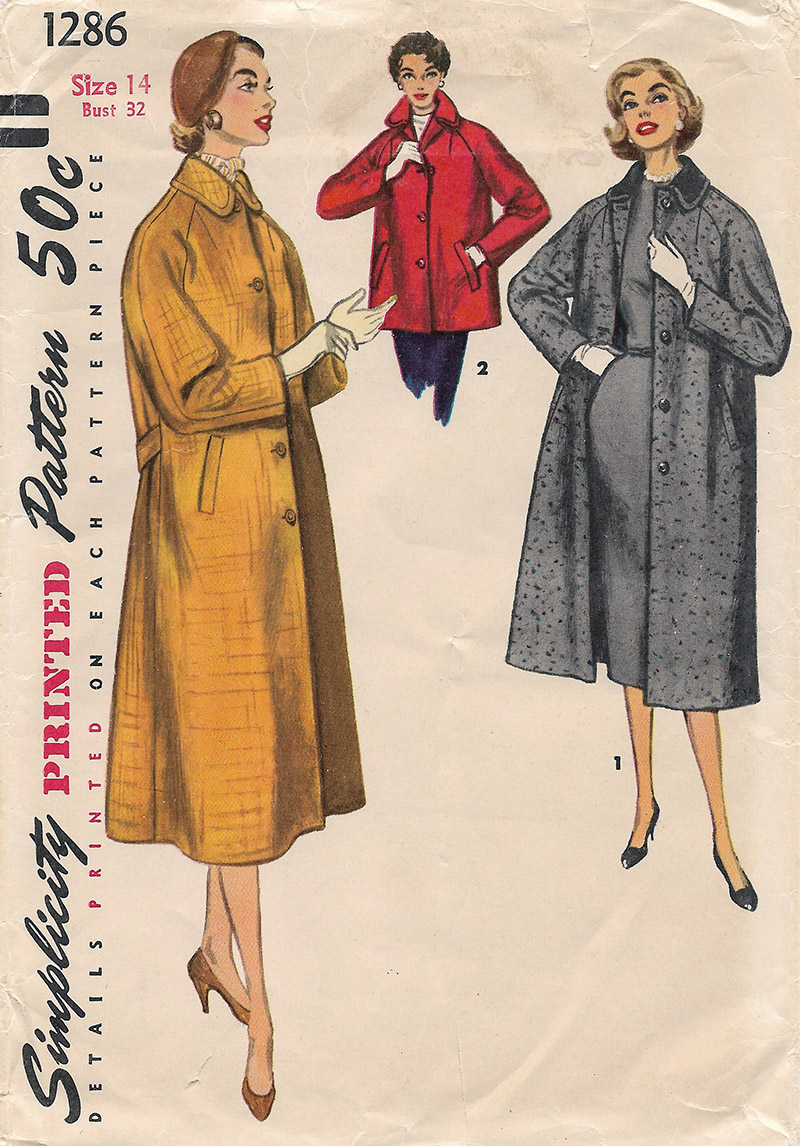 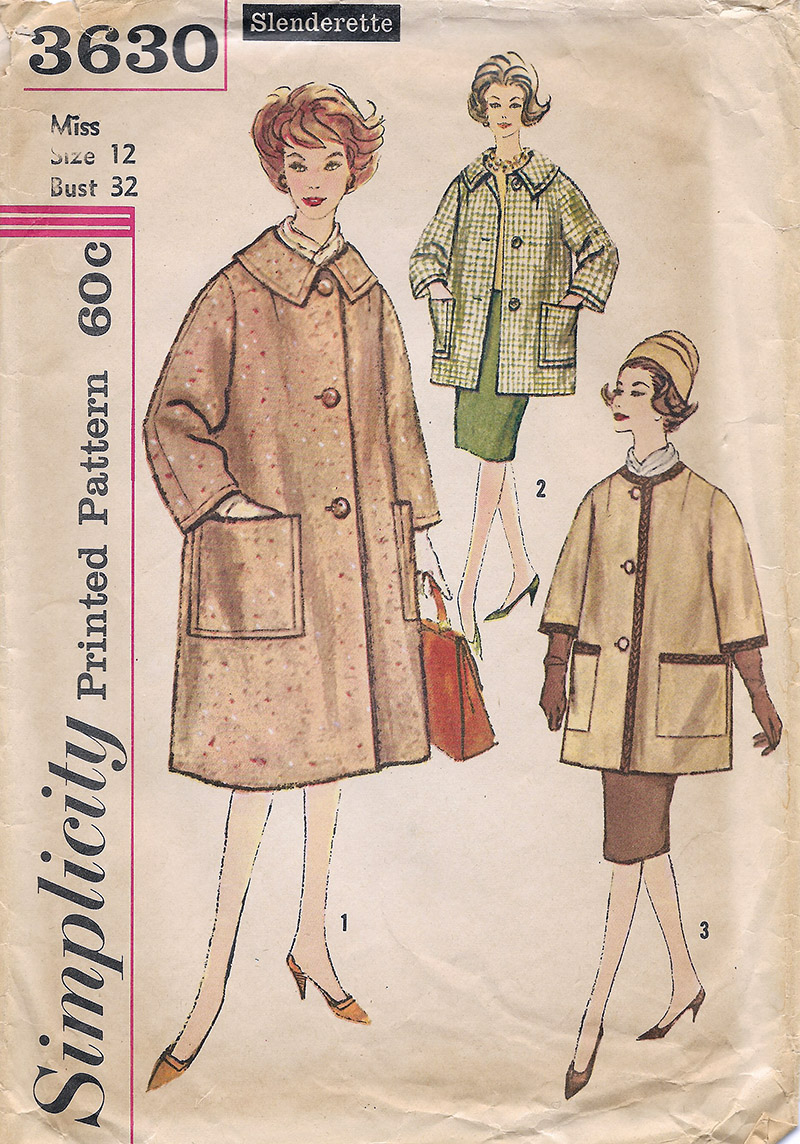 And the sleeves on 3630 are interesting because they’re two pieces like a raglan (so seam down the outside of the arm), but they’re actually set in. I think the sleeve width (going by artwork alone) for 3630 is what I’m after, and I’ll do a three quarter length, like my favorite vintage coats. (Don’t worry, I’ve already knit elbow length cabled gloves to keep my arms warm, though I haven’t blogged about them yet!)

I also like the collar on view 1 of 5103. That’s the red and leopard print versions at the bottom right of that pattern envelope—you can do up the collar with 2 hooks and eyes which is kind of neat. Though I would prefer to catch the closures in the seam allowance so they aren’t just sewn to the under collar after (like the pattern indicates), and I’m not quite sure the best way to go about that.  Maybe just sewing over them super slowly, using the fly wheel by hand to make sure the needle clears the metal bits of the hooks and eyes? I’m a bit concerned about this though, because if it doesn’t come out looking perfect and closing up exactly the way I want it, I will be mega angry. So that makes me lean back towards sewing 3630 instead. 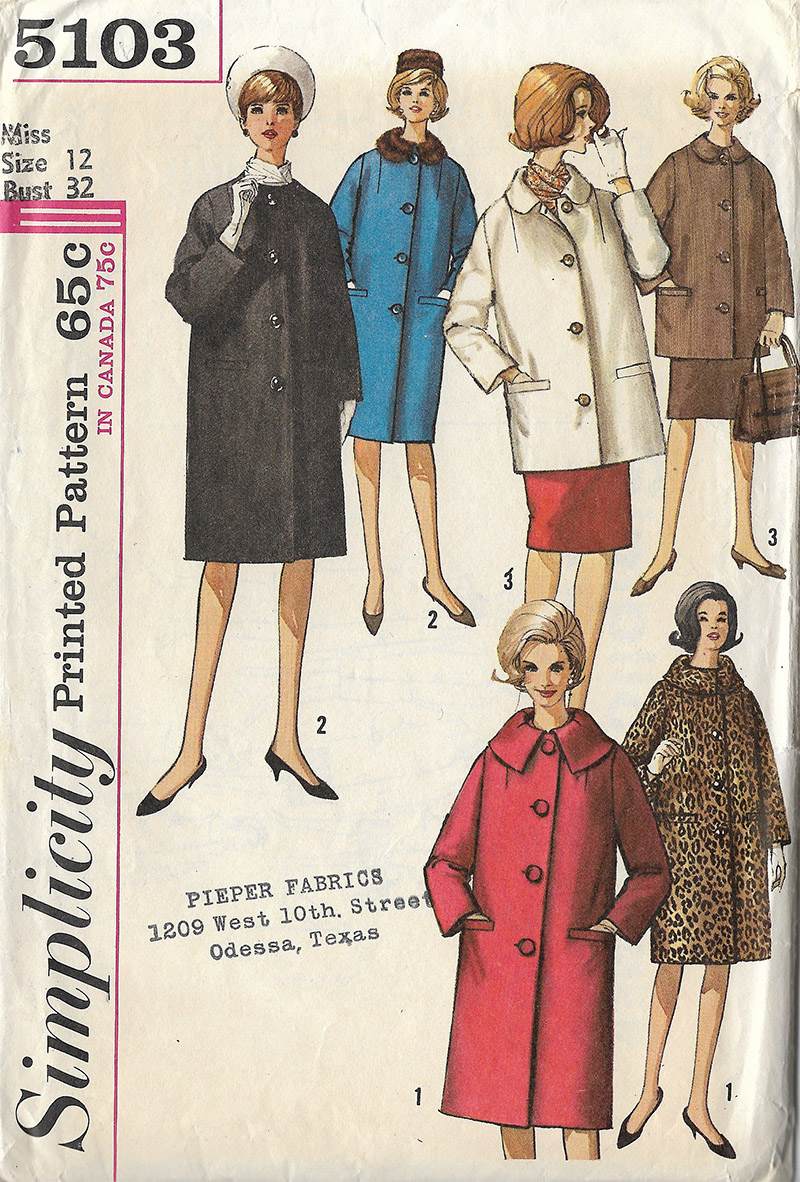 I did an extremely preliminary check of the patterns and it’s worth noting how pattern artwork can sometimes lie. Given the drawings, I would guess that 3630 has a wider and more boxy shape, but when I pulled both it and 1286 out and compared body pieces, they were nearly the same width! I haven’t checked 5103 yet but I’ll be curious if it’s similar, or narrower through the body.

I’ve also been going back and forth about pockets (a lot of people weighed in with a variety of opinions on Instagram). I think I’m mostly settled on doing angled single welt pockets like 1286. I’ll definitely be doing some practice runs though, for single welt pockets and bound buttonholes, as both are things I haven’t done before!

The nice thing is that because I adore vintage coats so much (um, a bit too much), I have some I can use as references. Thankfully I tend to favor longer coats with free hanging linings, which means I can peek up into the innards without taking anything apart! Because frankly, that’s well beyond my upper limit of “things I’m willing to do to study details for a project”.

So coming up soon, if I can take any photos worth looking at (which is possibly doubtful since I’m not taking them apart), I may do a post that summarizes a few inside details of my most-worn vintage coats. They’re a bit more simple than I expected! Stay tuned for more coat making… I better get started soon, so that I’m not finishing it when it’s too warm to wear it! (Hey, a girl can dream of spring, right? 😉 )