In the spirit of Make Do and Mend, I did something recently that I’ve done only once before that I can recall: refashioned my own knitting! 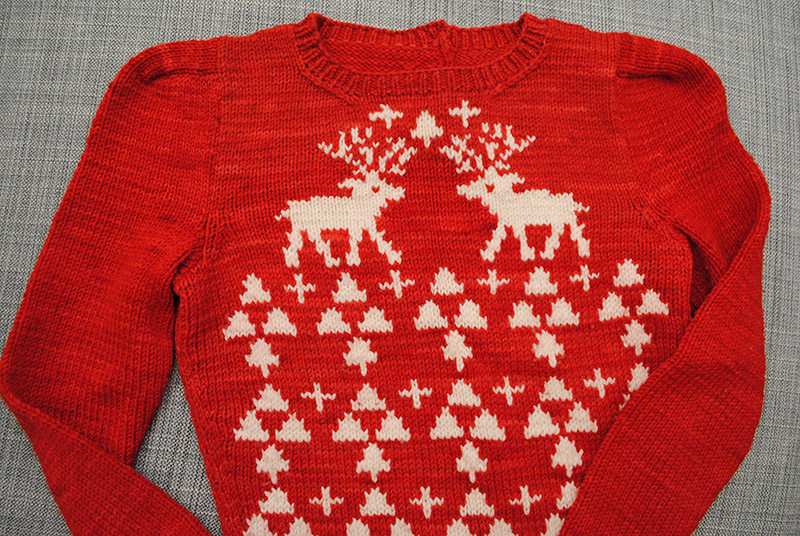 As an aside, if you’re familiar with the pattern, you can see one major difference: the design is a lot bigger because I knit it in worsted weight yarn instead of fingering weight, since I knew a sweater for this time of the year needs to be truly warm where I live. I can’t believe I knit this six years ago! (And uh, six years later, I’m still bitter that the red Dream in Color Classy bled on the white, leaving some of it very so slightly pink. I’ve never knit with that brand of yarn since, although it’s worn pretty well. Time does not soften all knitting wounds.)

Anyway, the problem with this pullover was that I figured out three or more years ago that I really hate box pleated sleeve caps on me.  So sadly, my Perfect Christmas Jumper has languished unworn for years, staying packed away during the holidays. Which is a real shame, as it’s a great sweater that I otherwise loved!

So during a completely random moment last weekend, I was suddenly struck with the urge to change this. Immediately! Literally, I thought about it, and then went downstairs to pull it out. And then I did something that I did on a cardigan a couple of years ago for the same exact reason: I took the set-in sleeves out of the cardigan, ripped out the box pleated sleeve caps, knit them as normal sleeve caps, and set them back into the sweater. The most annoying things in the entire process were actually unpicking the woven in ends, and then re-doing the math for the sleeve cap. (Though I have a very, very old and painfully, arduously long but still accurate tutorial on that sleeve cap math from 2011.)

Here’s what it looked like as I was removing one of the sleeves. 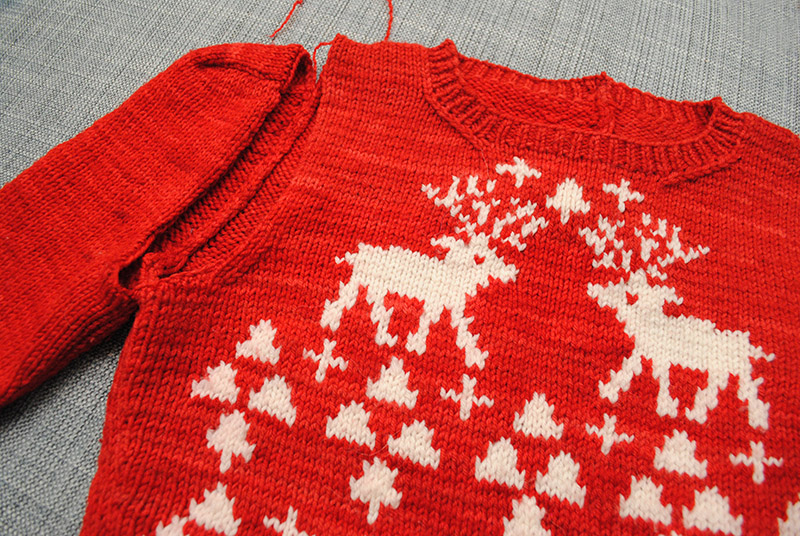 You don’t start to wonder if you’ve made a giant mistake and shouldn’t have done it until about the point when you’re unraveling a sleeve cap. I maintained the rest of the sleeve, which was knit flat and thus seamed shut, so I had to be really careful not to accidentally go further than the armhole bind off. To make it easier to get the stitches back on the needles though (thank goodness my old Ravelry notes told me which size I used), I unpicked a few inches of the sleeeve seaming.

Oh to make it slightly more annoying, I discovered I had alternated skeins of yarn, hence the two balls as I unwound! 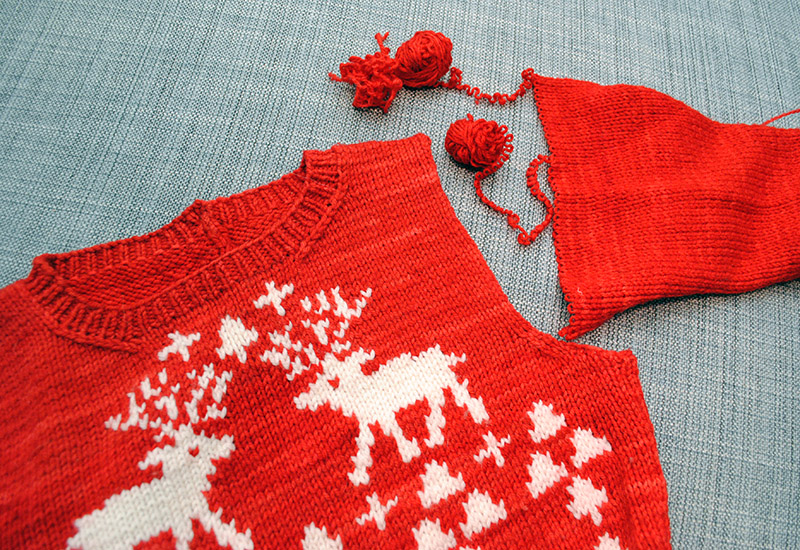 But re-knitting the sleeves caps was easy and fast, and pretty soon I was setting plain sleeves back into the sweater. That was after blocking just the caps, because I used the same yarn as I unwound, so it was all kinked up of course. 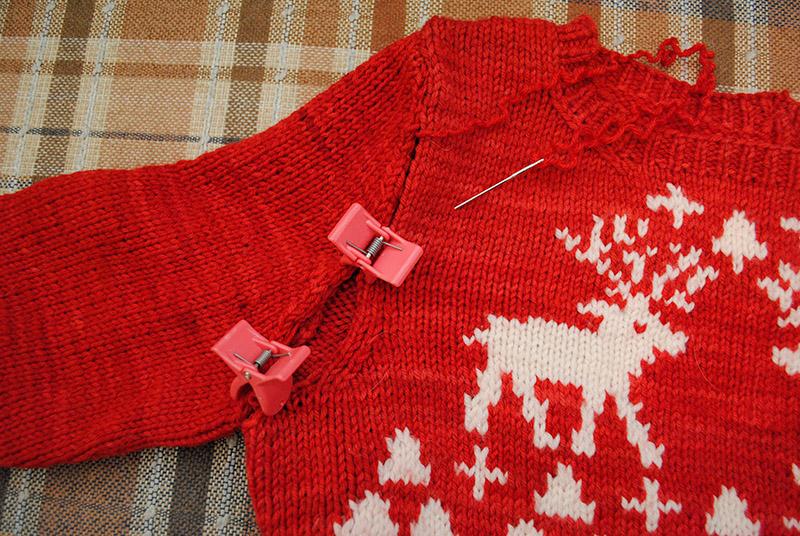 It was a relatively small and painless (albeit a bit annoying) change that was well worth the effort to basically give me back my Christmas pullover, just in time to wear it this holiday season! 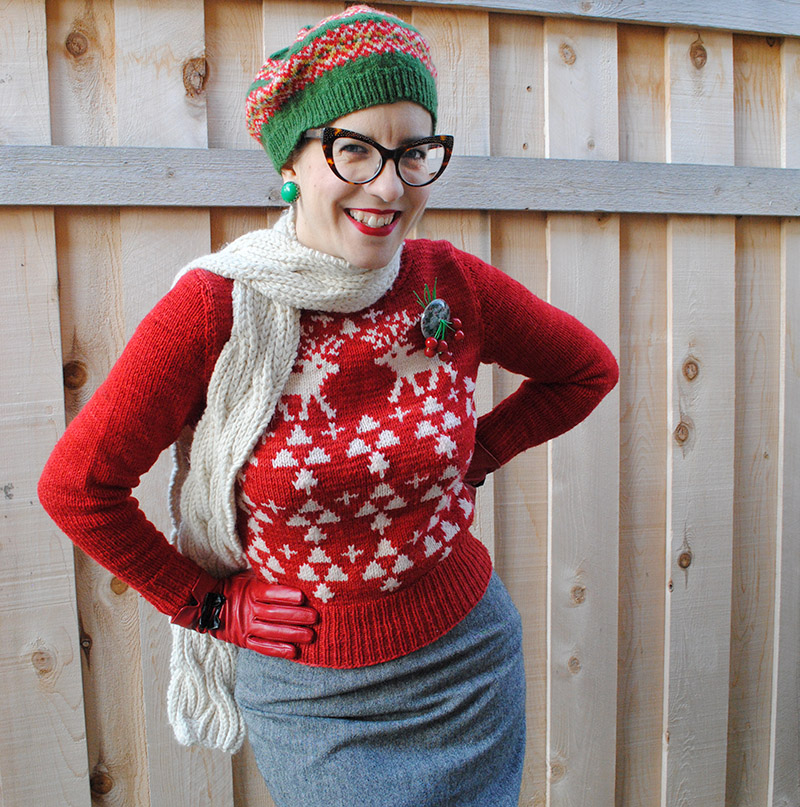 And not a moment too soon. Huzzah! 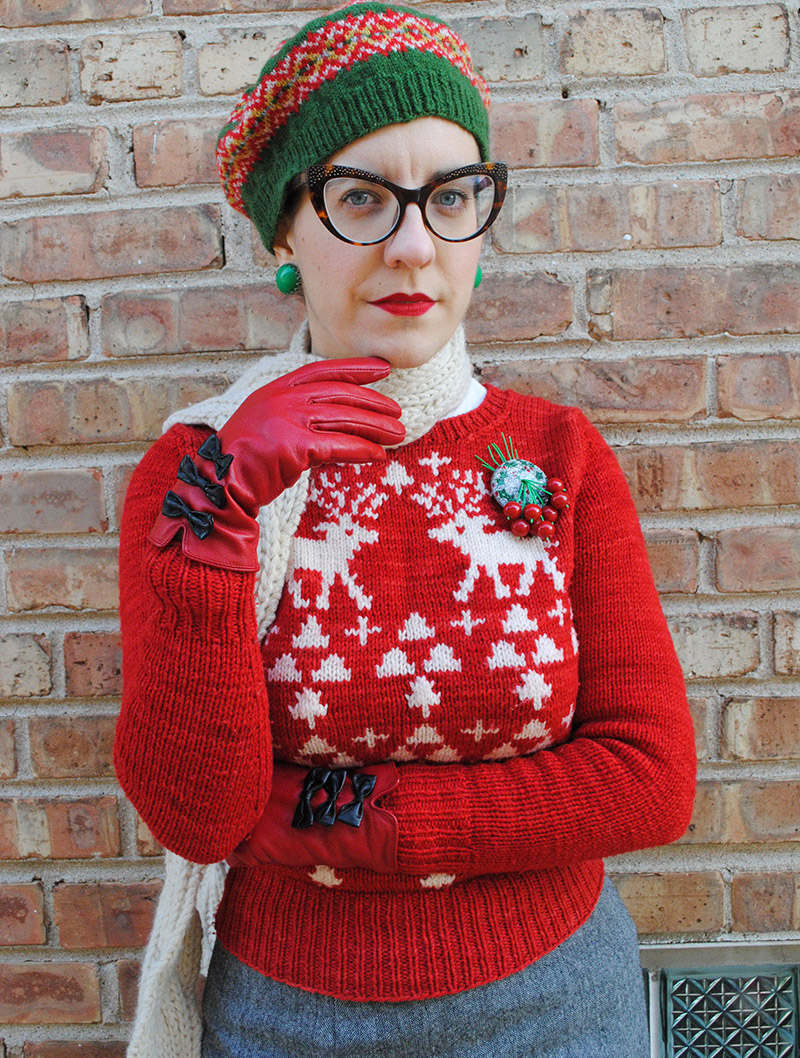 Have you ever considered refashioning your own knitting? I’m sooo glad I did!