Friends, sometimes you make something, and you’ve seen others make it too, and it’s an easy enough project, and you’re fairly confident it’ll look pretty cute once you’re done. 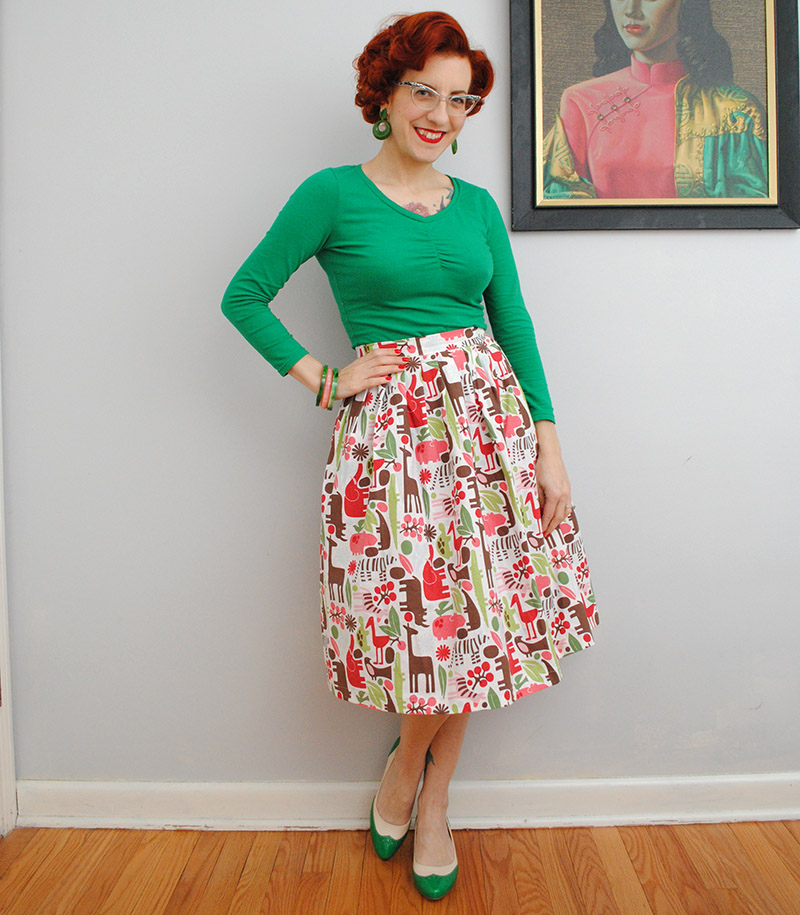 This was not one of those times.

Oh no, because I didn’t make the above. I mean yeah, I eventually did.

But what I actually made first was this. I think the faces sum it up. 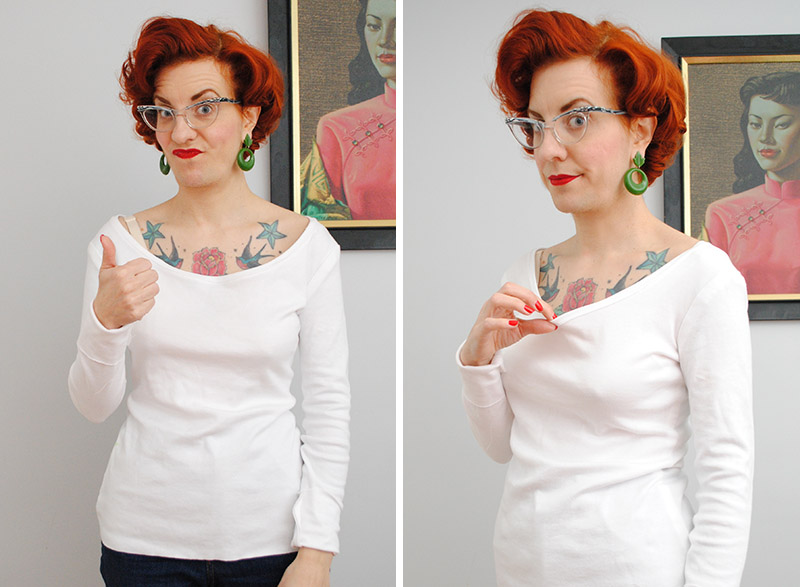 That white thing was my initial attempt at the Tilly and the Buttons Agnes top. And photos cannot possibly convey just how lousy this looked in person. (I say “looked” because this t-shirt is now past tense.)

The neckline was absolutely giant on me, and somehow baggy to boot. It could pretty much fall off both of my shoulders, while fitting another half of me inside above my chest. The neckline came so low, you were nearly looking into the center of my bra, so forget adding elastic to ruche it. The neck band seemed a bit too long and was therefore a tad wavy, but there was no point in trying to fix that since the rest was so terrible. I took a bunch of photos and they’re all basically the same… I don’t think it looks as bad in the pictures but it. was. BAD.

Everyone I’ve seen who’s sewn this up looked cute and sassy in their fitted tees with ruched necklines. Damnit, I wanted that too! Just a plain fitted t-shirt pattern that I could sometimes add a ruched neckline to. I have a RTW tee like that and it’s always one that I’ve thought “I could really do with 10 more of these!”… but of course it doesn’t come in all the colors I want, and the fit is a little over-sized for my taste.

So I really really wanted a pattern like that so that I could make a whole armload in different colors, not only with the ruched front but plain and probably other necklines once I got to tinkering. I realized that was a huge hole in my closet. I opted against Renfrew because I knew I’d never make the cowl neck and likely never the v-neck so it seemed a bit lost on me, and I wanted something a bit more fitted than most of the versions the Tonic tee (or long-sleeved, crew neck Tonic 2) I’d seen. I didn’t use the Grainline Lark tee because ummmm oops, it fell under my radar, although it’s possible with the quite fitted look I was after, I’d have been off the size chart. I tried to look for Big 4 or other non-indie patterns but is it just me, or is it really hard to specifically look for stretch knit patterns?? Ugh. I’ve been trying but I’m having a hard time. Maybe I need to be spending more time on Pattern Review? Anyway, I went with Agnes. It had the body fit I was going for and the ruched neckline, too.

But my first attempt had me seeing red, so I stuffed that bad boy in the corner for a couple of weeks.

When I wasn’t steaming, I tried it on again. The sleeve, albeit too long (easy fix), hung really nicely. Not only did they not twist, they actually fit my arms, which is more than I can say for every other knit pattern with set-in sleeves I’ve sewn to date, and most of my RTW tees, too. They usually have deeper armholes and wider sleeves. Agnes has a higher armhole, and I like the fit of the armhole and sleeve. So those were wins.

Below the bust fit exactly like I wanted, too, other than again, being too long (and another easy to fix). And I’d pre-emptively raised the waistline 3/4 for my short torso, which was a good call and put the waist in the right place on me. So those too, also wins.

But that upper body… man, that was just sooo bad. I am a petite person with narrow shoulders but by no means am I unusually narrow (sometimes I need a narrow shoulder adjustment but not always). I just felt like there was a lot of tinkering needed, and so instead of trying to raise the neckline and do a narrow shoulder adjustment and all that jazz, I decided to do a little marrying of patterns. I remembered that I liked the fit of the shoulders on my Lady Skater dress, so I tried that on again. Other than the sleeves being too wide, the shoulders fit great. And so I fussed. In the end, this is what I ended up with:

I wanted to retain the sleeve and as much of the armsyce shape from Agnes as I could, and the shoulders from Lady Skater as much as I could. It doesn’t look like a huge difference in the pieces above, but man, it was a dramatic difference on my body. (For reference, both of these fabrics are almost the same, about 10-11oz. cotton/lycra blends.) 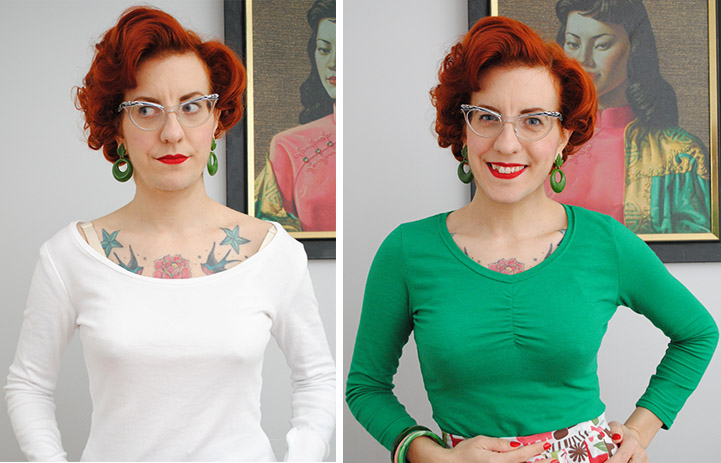 And the result I’m calling my Lady Agnes tee. Lady Agnes is basically exactly what I’m looking for: a truly fitted, basic t-shirt. The sleeve hangs great and doesn’t twist. The shoulders fit. The back isn’t gaping. The armhole is comfortable, doesn’t feel too high or too low. There’s a tiny bit of wrinkling under the armhole, but I’m not concerned. I’m still not entirely convinced it is an issue. Which Nicole from Manic Pop reminded me of on Instagram: sometimes we can get so caught up in thinking every little wrinkle or fold is wrong is a problem. Hell, this is a stretchy fabric. I’m not sweating it. 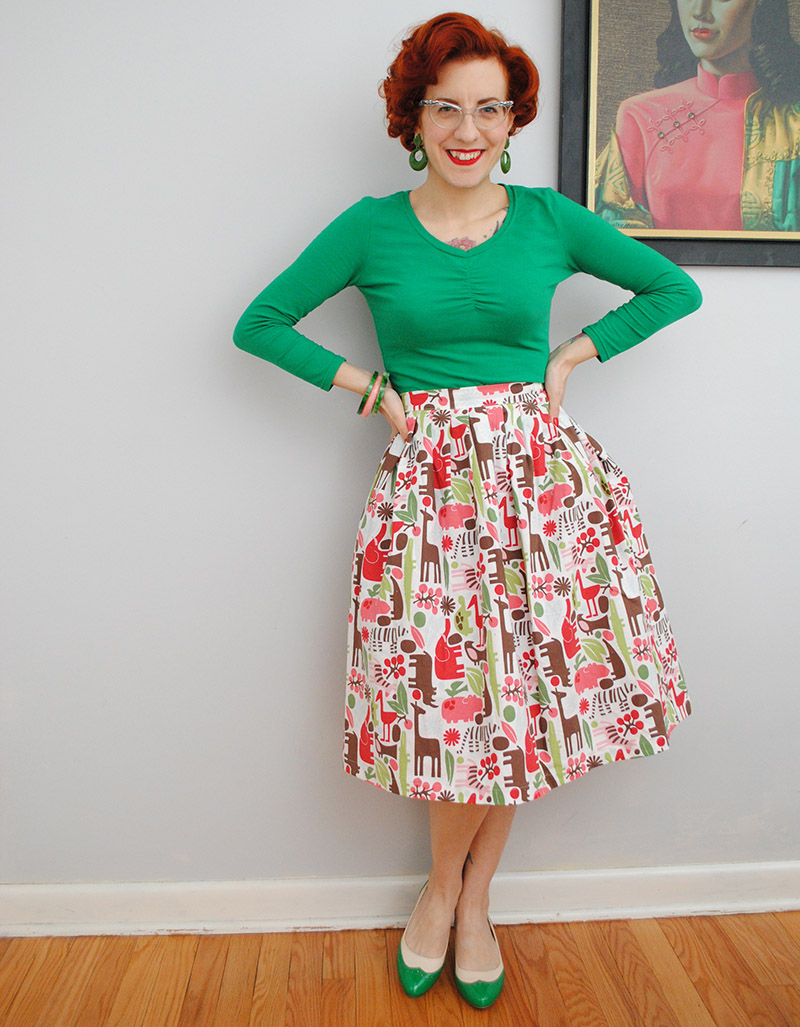 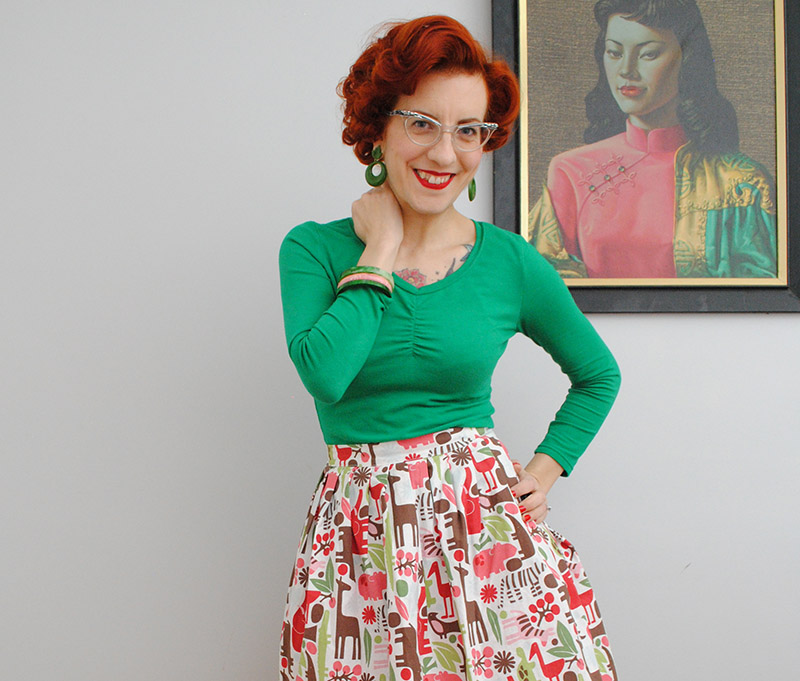 Right now, I’m just so damn freaking happy to have nailed down a basic, fitted, tee. It seems like a really weird thing to be excited about. But over the last several months I’ve realized I dislike the fit of the majority of the plain tees I own (which aren’t many, because hello, I can’t find ones that fit right). The sleeves are too big, or the torso too long, or the fabric rolls up because it’s too stretchy (and too long), or the necklines are too wide, or they’re baggy. Yet I always open up my drawers looking for tees that don’t exist, so it prevents me from wearing skirts more often which I really like doing, and it’s an annoying cycle. 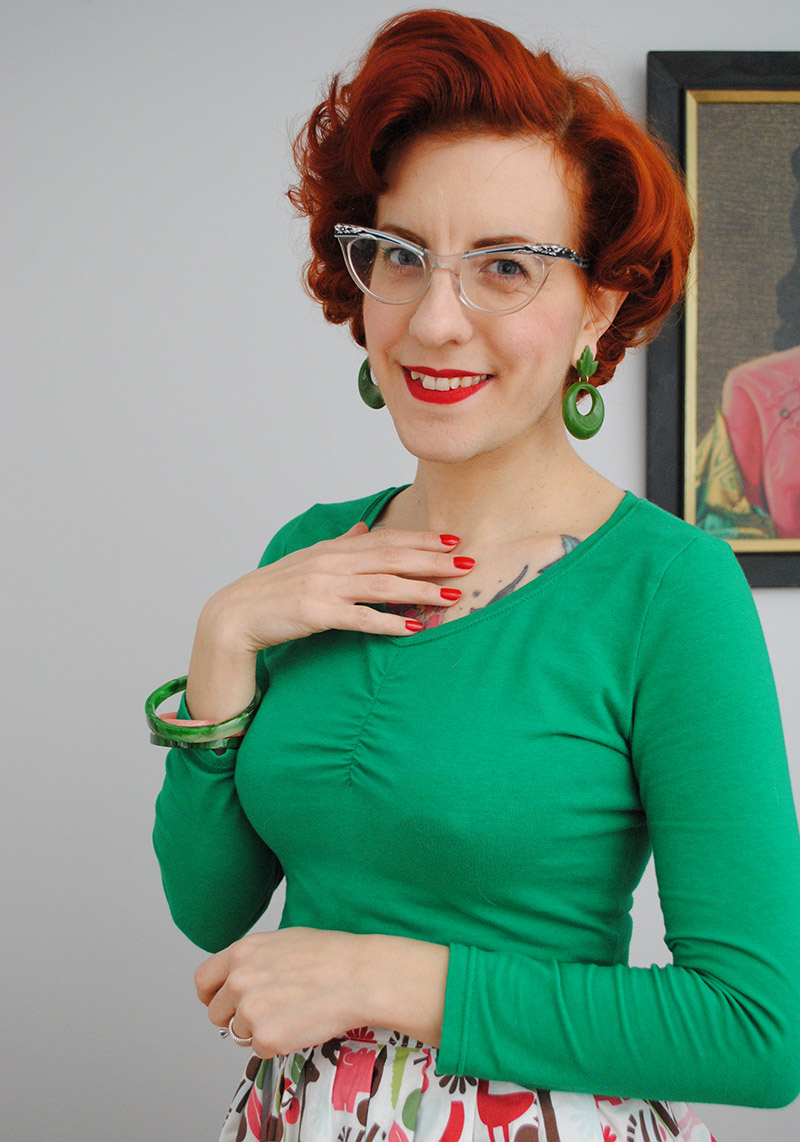 So, expect to see me in a lot of Lady Agnes tees. Like, a lot a lot. I’ve already sewn a second, and there will be many more. No apologies: I need fitted tees yesterday, and I fully intend to make up for lost time! 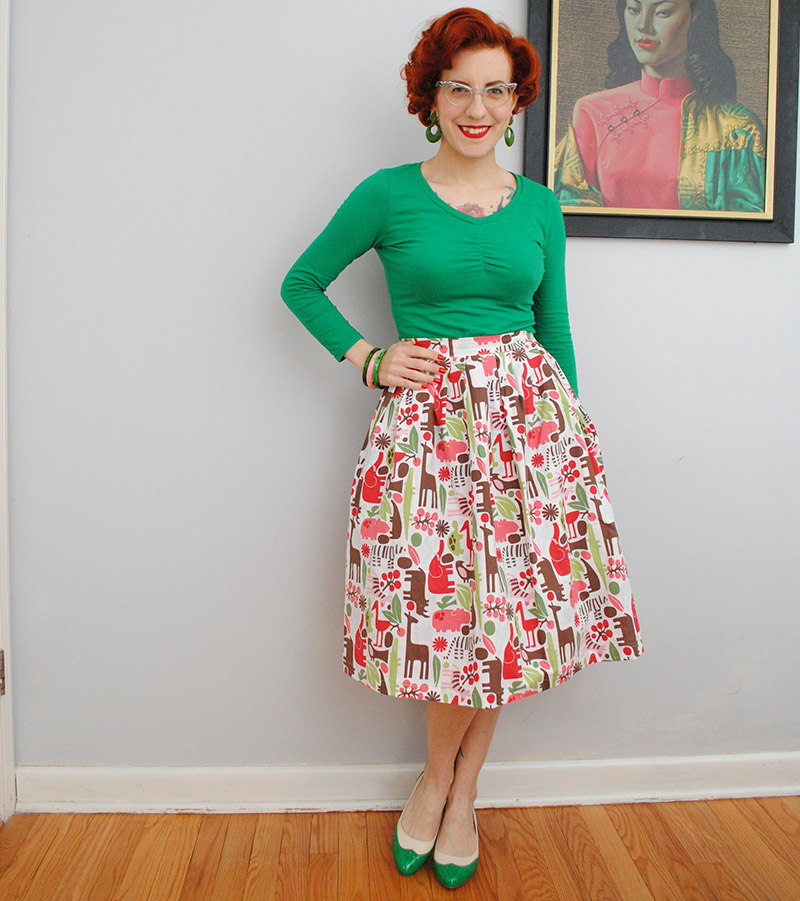 Lady Agnes tee – made by me
skirt – made by me (started like 5+ years ago and only finally hemmed it!!)
shoes – BAIT Footwear Idas
Bakelite bangles – Brighter Bakelite
resin earrings – made by me