In the battle between a formidable adversary of a pattern and me, who was the victor? That would be ME! 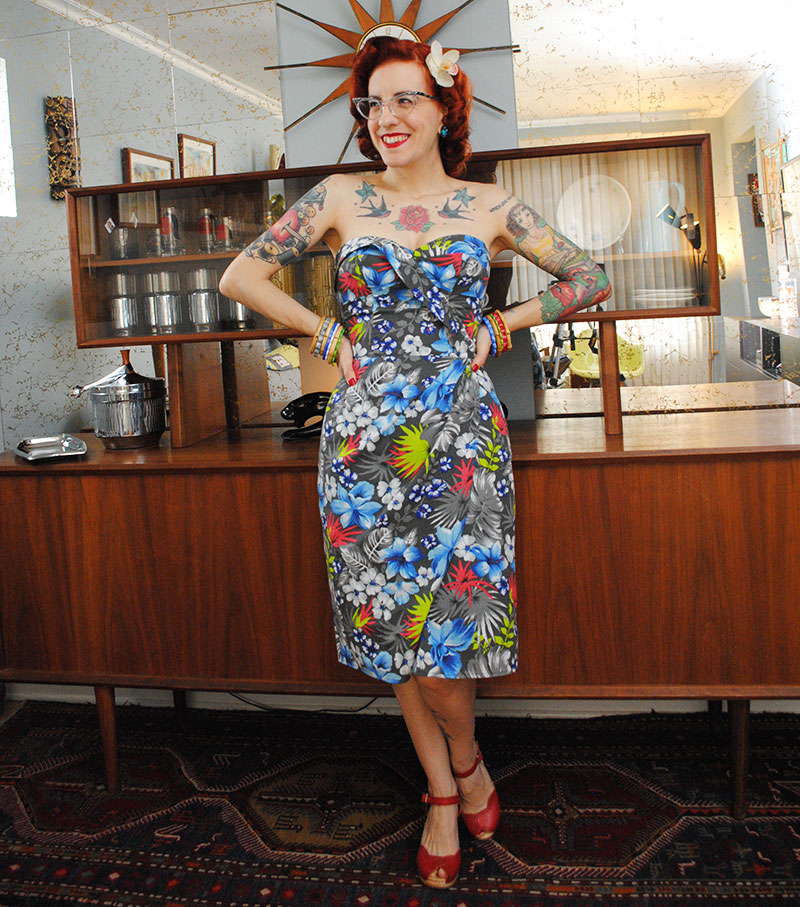 (Whoops! Sorry you’ll see the tripod in the mirror in some of these! The stars didn’t align to take photos outside)

But let’s backup a bit! Because I’m not quite here today to tell you all about this dress exactly. Don’t worry, you’ll get that soon though!

Here’s the story. I’ve been wanting to sew up the above pattern for awhile. It’s Butterick B6019, one of their Patterns by Gertie (Gretchen Hirsch). It’s a retro pattern inspired by vintage Alfred Shaheen dresses. I’ve been contemplating sewing it all summer, and then, I was contacted by a company called WAWAK Sewing Supplies.

Now you may or may not have heard of WAWAK, but they’re an online sewing supply store that’s been in the business over 100 years. I believe I first found them when searching for good prices on Maxi-Lock serger thread when I bought my serger 3 years ago. They’ve since become one of my go-to places to buy all sorts of sewing notions, especially when I discovered I could get 4 times the amount of Gutermann thread for the same price as the big box sewing stores like JoAnn’s charge for 1/4 of the amount of Coats & Clark thread. I mean seriously! And sure you can often get a 40% or 50% off coupon at the big stores, but even then it’s less thread and not as nice quality. So suffice it to say, WAWAK’s prices are awesome.

Anyway, they knew I was a customer already and contacted me to see if maybe we could collaborate on something. I don’t really do advertising on my blog per se… I’ve taken one or two ads over the years, but it’s not really my thing. I’d rather do something more personal if I’m going to work together with a company. So I cooked up an idea. What if WAWAK helped me out with providing the supplies for an upcoming sewing project, I’d introduce you all to them, and we all get a win-win! (Hint: there’s even a little coupon code at the end of this post!)

Honestly though, it was an easy decision to say yes to working with a company I already shopped with, and I got to learn a little more about them in the process. They’ve been around since 1907 and while they’ve had more of a professional focus over the years in the sewing and tailoring industries, they’re trying to reach out to us home sewists more now, too. In fact they’ve recently redesigned their web site and it made things a whole lot easier to find! Although I must say, I still really like receiving their paper catalog. It’s one of the few catalogs I actually want! (What, you don’t like pouring through sewing supplies? Well if you do, you can sign up to get their catalog, too. And no they didn’t ask me to promote their catalog, I just really like it. Ha ha!)

So when I was thinking over what would be a special project to bust out for this collaboration, my thoughts (crazy or not) turned to that Shaheen-inspired Butterick pattern! I know you want to see more of that dress now after all that chatter, right?? 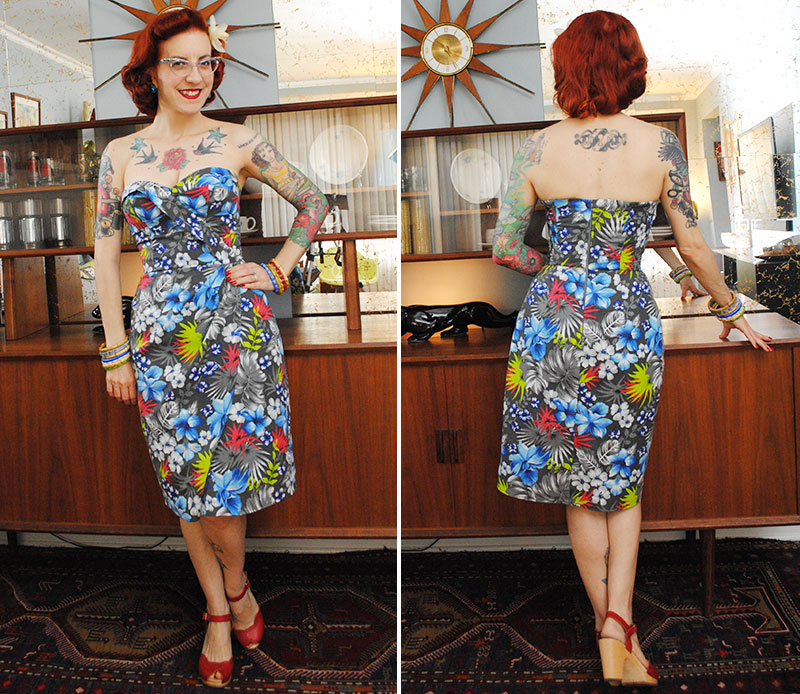 I actually have a ton to show and tell you about it, but I’m going to save that for my next post. Don’t worry, you’ll get waaaay more details and an inside look (literally) early next week.  😉

I’d already bought the fabric before chatting with the folks at WAWAK although I’d been hemming and hawing about it, which is one of the reasons I had the project on my mind. Once I committed to it, WAWAK kindly supplied me with Gutermann thread (by the way if you’ve used their site in the past, it’s now waaaay easier to find a thread color even if you don’t have a shade card!), a YKK zipper, and then all of the other things that should have maybe sent up a red flag that I was in for a bit of a doozy of a project.

Things like elastic thread, and elastic… and hooks and eyes… and covered boning… I mean, boning! I’ve never had to use boning in anything before. Oh and I needed batting for the bust, too. But since they only sold batting in really long rolls for quilters, I popped over to my friend Elisa’s house who kindly donated some batting for my dress. Because basically I just needed two boobs worth.

This dress felt like it had it all. Shirred side panels, boned and lined bodice (front and back), batting in the lining of the bust, elastic casing over the shirring… not exactly my everyday dress components, especially not all together like this! 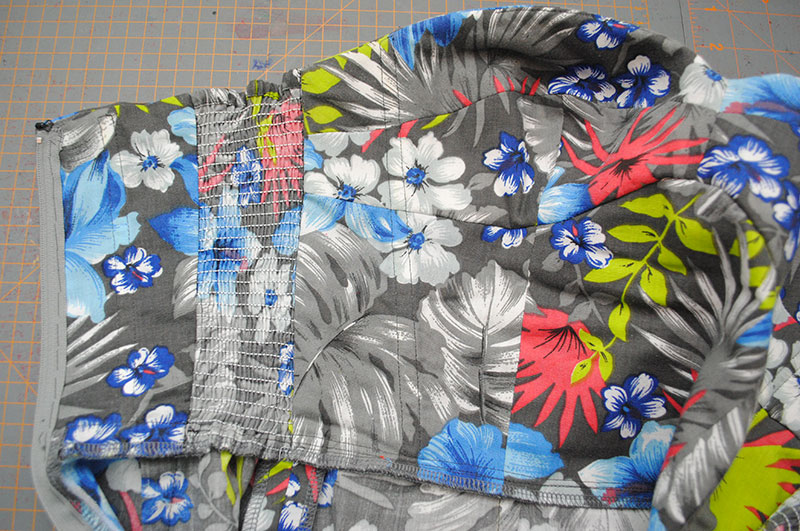 Some frustrations during the sewing process and a few minor fitting quibbles aside, it all came together pretty marvelously in the end. 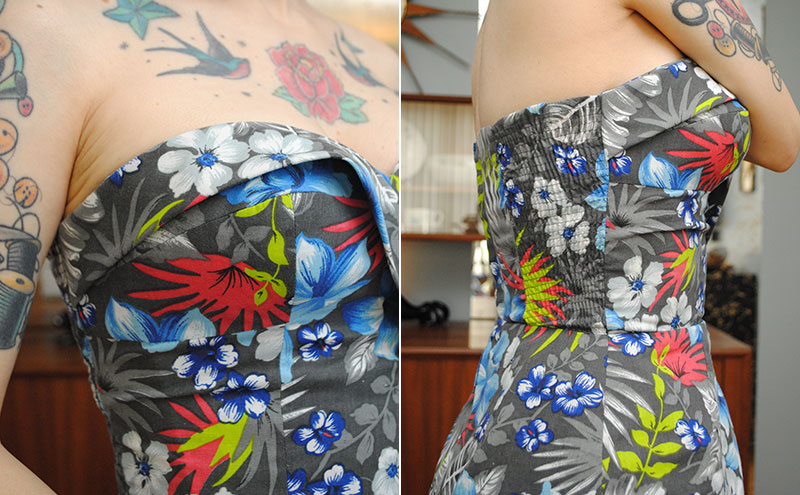 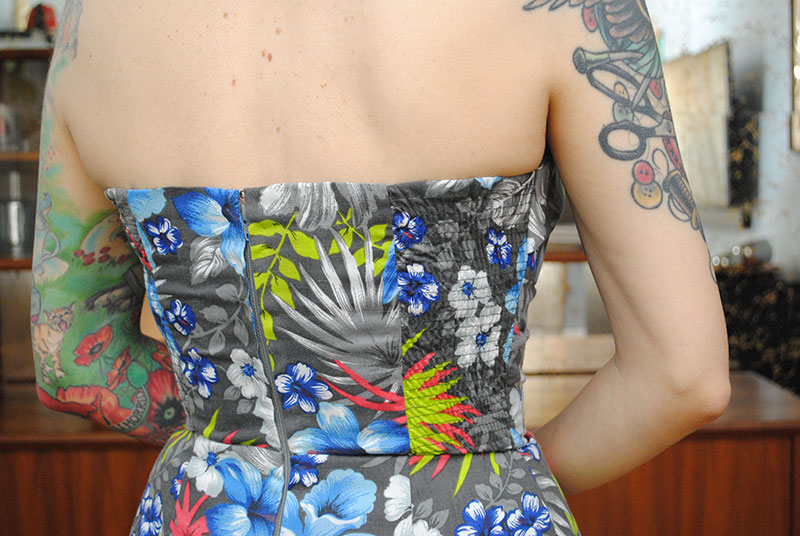 As you can see, I left the dress strapless, which wasn’t my initial intention. The pattern has you add buttoned-in halter straps at the end if you don’t leave it strapless, so they can be removed and converted to strapless. My plan was to add straps that buttoned at the back and front, with probably no intention of ever taking them out. In part because I can’t think of a single strapless in my closet. But once I had everything else finished I tried it on and… well, I kind of loved it strapless! 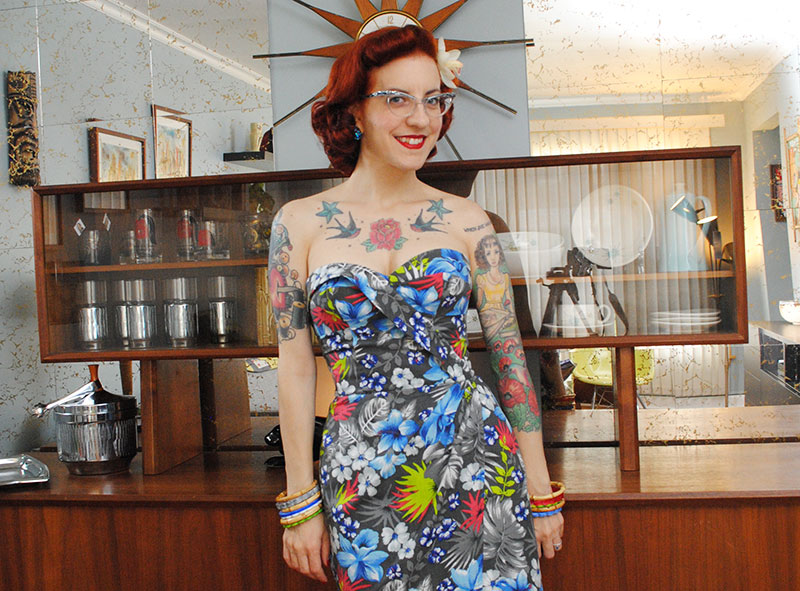 Surprisingly, it was fitted enough that the boning was able to keep everything mostly in place without being indecent (still a bit of pulling up on occasion as it or my bra slips down a bit). But I figured, let’s go for strapless for a change, because it looks pretty awesome like that! If I find myself never wearing it down the road, I can always add straps as I have plenty of fabric leftover.

And for a bit of extra modesty or just for fun, I sewed up a matching bolero from a vintage pattern. (Oooh, which makes it another Vintage Pledge item technically!) 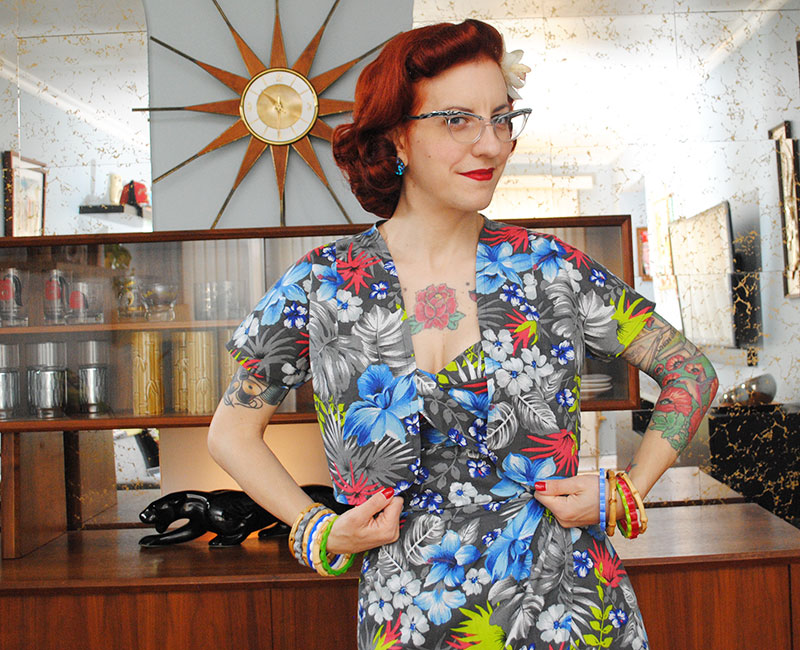 Can’t you just see me sipping a tiki drink in this ensemble? I think one of the vintage bamboo glasses behind my elbow would do just nicely for that. 😉 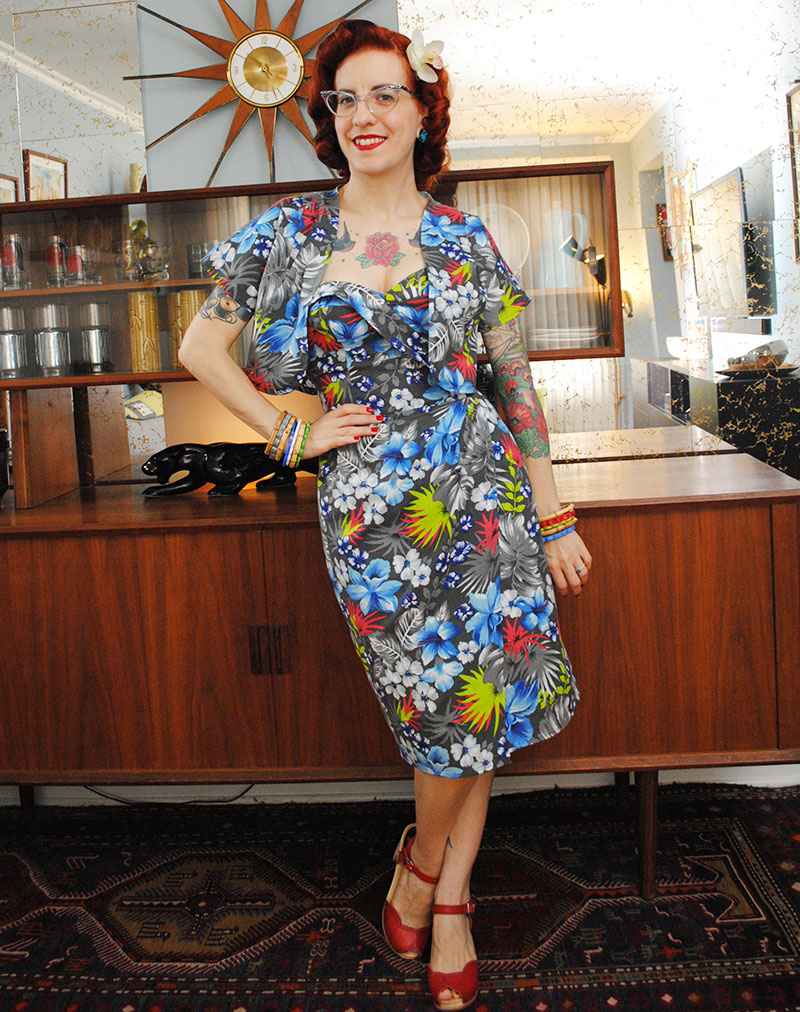 So that’s the first glance at my new favorite and very hard-fought dress! I’m so thankful the kind folks at WAWAK supplied most of the bones (including the boning, ha ha!) for this dress, and I’m so glad I picked this for our collaboration. It really motivated me to push my skills and my comfort zone. All the things that made my eyes cross while sewing were worth it… but fear not, soon I’ll regale you with those stories, too!

One last thing though: here’s a little coupon for you! For the next month (good through September 15th), you can get 10% off an order of $40 or more at WAWAK, just use the coupon code WR1015 at checkout. If you’re stocking up on thread for future projects or buying multiple cones of serger thread like I sometimes do, that’s an easy number to hit. 😛

So, new Alfred Shaheen-inspired sarong dress for me, and a little WAWAK introduction and love for you! 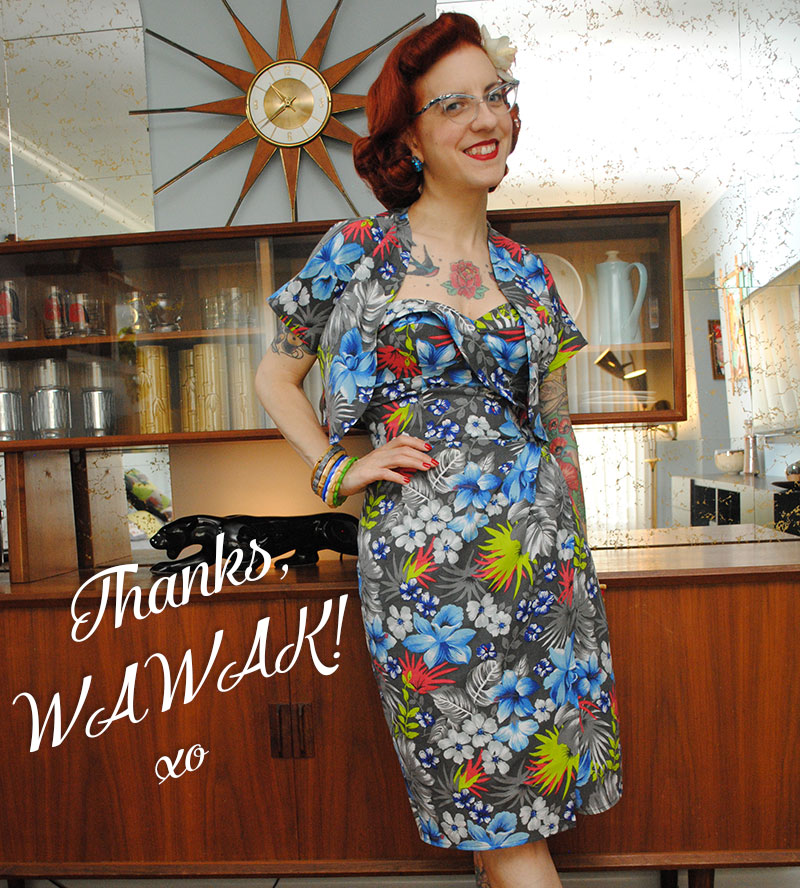 Full tales and more photos of this dress next week! 😉