I’ve been sewing slowly so far in 2015. Thinking about my two coat projects, taking my time, and just knitting more, I guess. But I finally finished up a skirt I’ve had mostly done except for the hem for nearly 2 weeks! This is my first pattern for Marie and Kerry’s Vintage Pledge. I pledged to sew from 5 vintage patterns this year, which should theoretically be easily do-able!

This is McCall’s 3853 from 1956, a nice full skirt with inverted box pleats front and back. 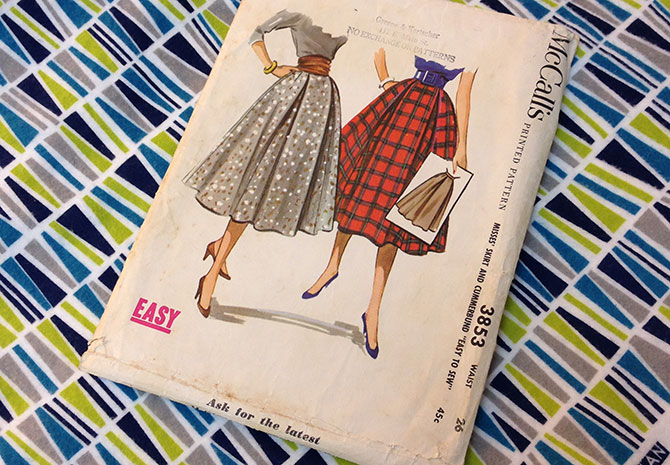 I made it up in a kind of 50s-looking Robert Kaufman cotton flannel. I thought the cozy flannel and picking a slightly longer length than I normally sew would be perfect for winter! Joan C. was the original owner of the pattern, so I’m calling it Joan C.’s flannel skirt. Or at least, Joan was a previous owner. She wrote her name on every single pattern piece. Maybe she took it to a sewing class? Fun to guess! 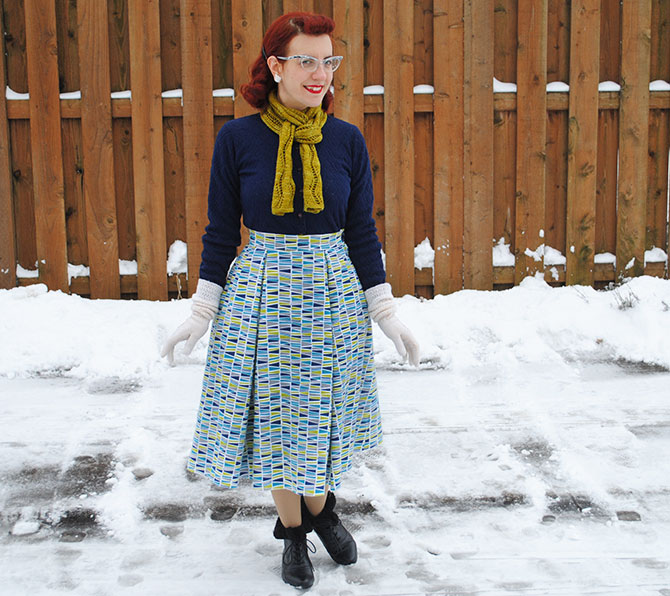 I must say though, Joan C. didn’t take very good care of her pattern. Many of the pieces had holes and huge rips, and the waistband piece was cut into 3 pieces with a couple of partial index cards thrown in. Huh? I don’t know, maybe she changed the size of the skirt by letting out the pleats and thus the waistband, although none of the waistband bits were attached together. It took some doing to iron and piece things together in order to trace the pieces, but worth the effort. 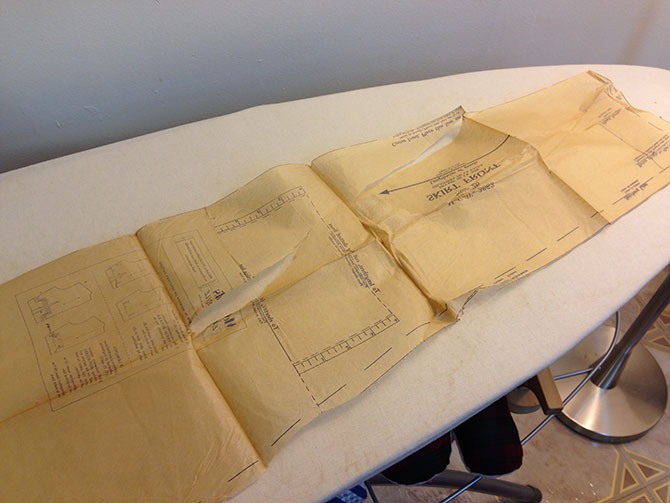 I went with a narrow machine-stitched hem like you might do on a circle skirt, since this was quite full—I used nearly all of the 3 yards it called for! I was kind of dreading the hem for a long time which is silly, since I ended up doing about the simplest one in the world. I closed it with a great navy blue vintage button.

There’s something funky going on at the side seams though, and if I sew this again, I want to try and address it. I’m not sure, but I think it relates to the darts which are on either side of the pleats, both front and back. Between them and each side seam, things just lay a little funny. And it’s not a matter of expected petticoats puffing things out… I’m wearing one in these photos but even a second doesn’t change that.

So basically, the pleated bits are lovely, it’s everything else that’s a little questionable. Maybe next time I’ll just incorporate the darts into the pleats, not sure. At any rate the fabric is so busy it’s not like you can really tell, anyway. 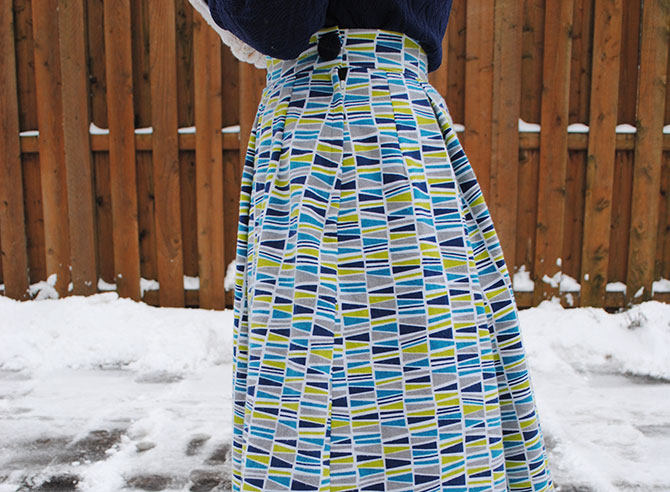 But those pleats, I’m loving them! I was a little unsure about halfway, through. When I first tried the skirt on before hemming, I noticed that the folds of fabric were catching on the rest of the fabric on the outside of the skirt, since flannel is kind of sticky. But I chopped a few inches off after letting the hem hang, and finger pressed and steamed the pleated until about 5″ down from the waistband (I didn’t want to crease them too hard). After wearing it around for a day and even outside in the wind, I can say it was totally fine!

Confirmed by the below photos, where the skirt got picked up by a big gust on the left, and came back down to earth properly on its own. (The expression on the left is my “Come on, not again!!” look because this just. kept. happening. 😛 ) 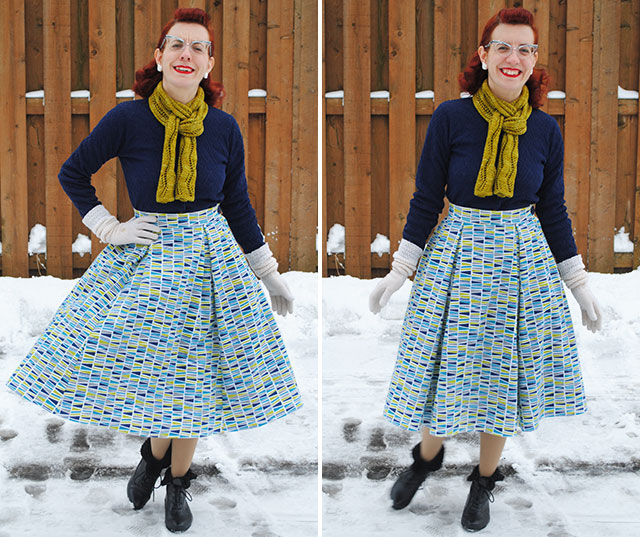 The outfit I wore ended up looking a bit like a skating ensemble. Since it was snowing and cold (I’m actually standing in the alley by our neighbor’s fence, ha ha), I opted for gloves rather than my hangs getting progressively colder and more red. These are a nice warm pair of vintage opera-length gloves that are great for some of my coats with bracelet-length or three-quarter-length sleeves. They were inexpensive when I bought them some time ago, I think mainly because they had several holes, but I darned them and have given them lots of life since. 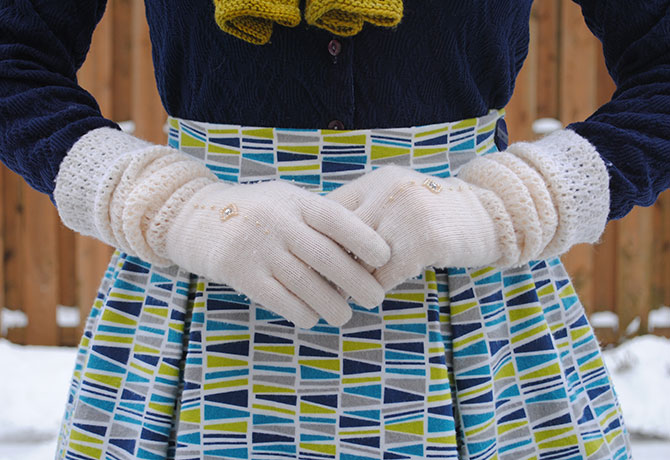 I topped it off with a scarf I knit several years ago, in a Blue Moon Fiber Arts sock yarn. I don’t wear it very much but I dug it out of the back of the closet and it was a great match for the chartreuse in the skirt! 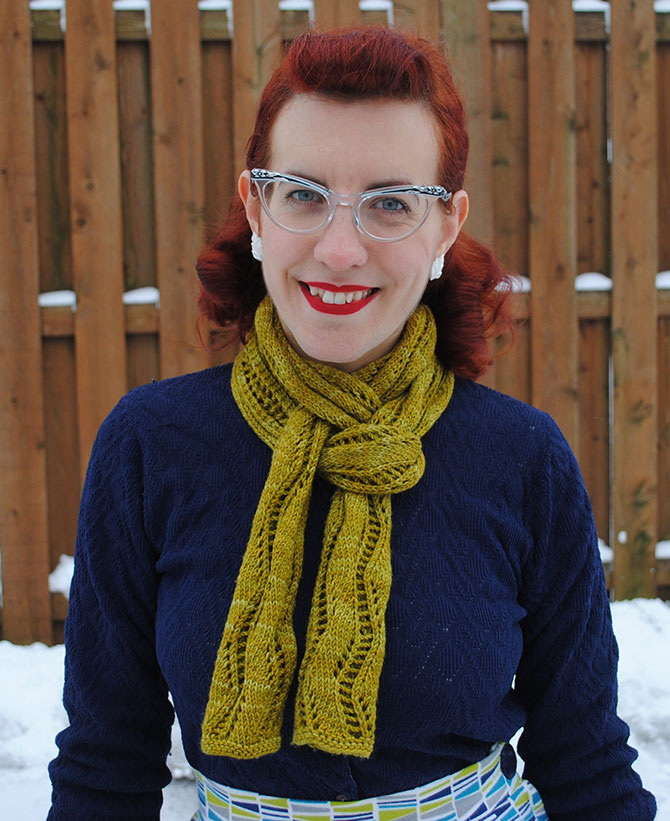 Overall I’m quite happy with the skirt and I imagine I’ll wear it a lot! I wish you could find more printed flannel that didn’t have kids or sports team themes, but hey, at least I was able to find one that has a nice vintage feel. Three cheers for trying to stay warm in style!

I wish I could have seen your version of this skirt. I hope I did well by your pattern! 😉 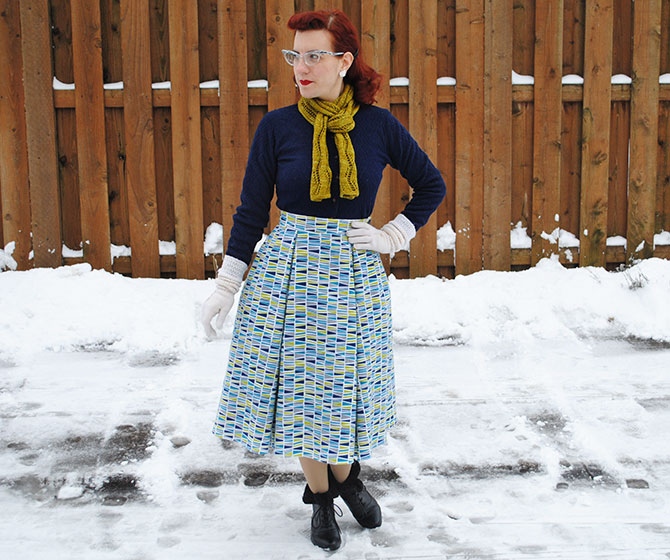