For years and years, I’ve wanted to have red hair.

Not that you’ve seen it since it was all pre-blog, but I’ve had loads of different hair colors over the years. From shades you might find springing from someone’s head naturally (like black, brown, and blonde) to completely unnatural colors (like pink, green and purple), with the only real exceptions being light brown and natural reds. I say ‘natural’ reds to distinguish from very unnatural reds like the more violet-based brown reds I often dyed my hair in college, or a true fire engine red, which I’ve also had (whole head for a short while, and large chunks for a few years). But I’ve never delved into the ginger zone, though I’ve coveted those orange-red copper shades longer than anything!

And Friday night, I finally became a redhead! Is there a club for redheads? Can I join now?? 😉 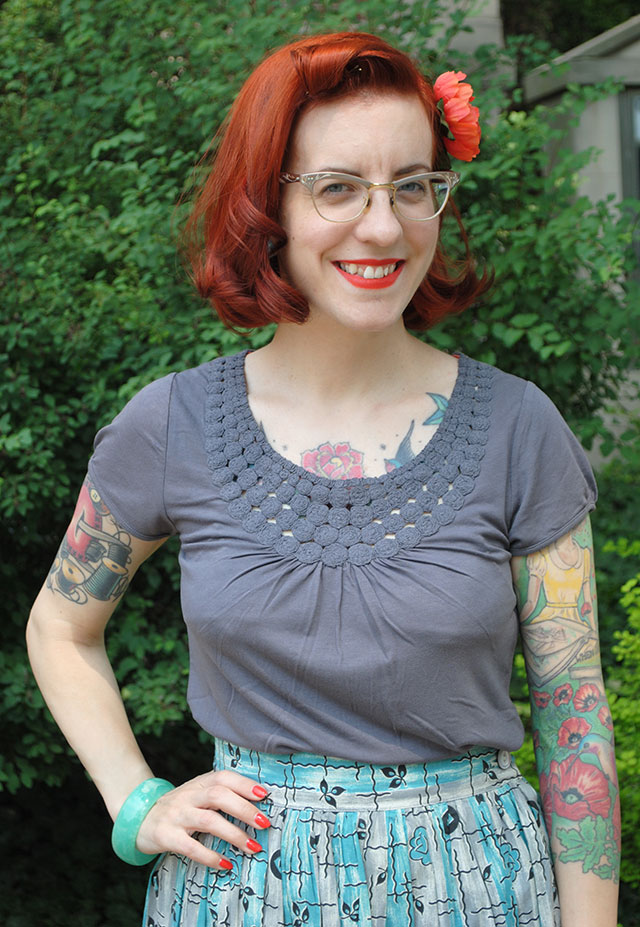 It was only a day ago and I’m still having trouble seeing that as my own head. Mel was kind enough to take a few photos in front of a random church in our neighborhood, and afterwards I had to ask, “Is that really my hair color??” Yes, yes it really is! 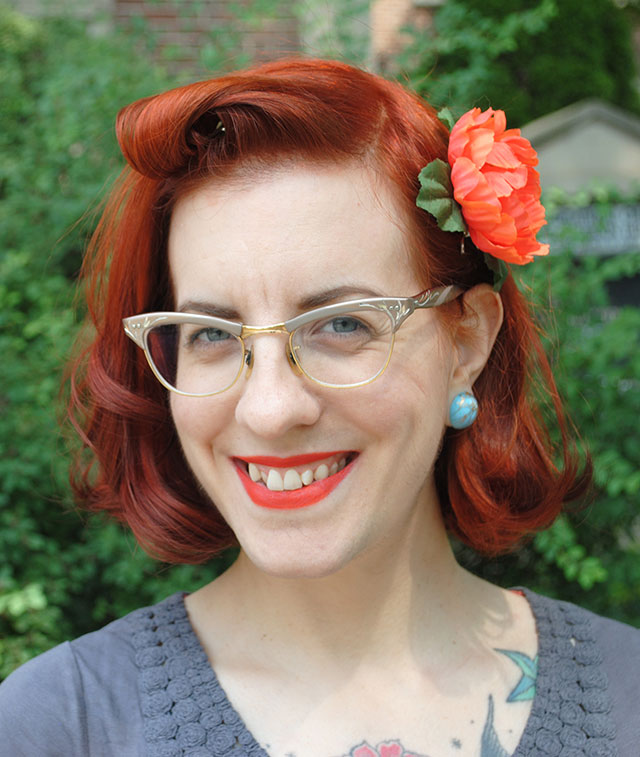 It was no small deal. My stylist Angelica, the owner of Tigerlie Salon, spent several hours getting my color just right yesterday afternoon into the evening. I had a lot more dye still deposited in my hair than it looked like, so while she lightened up the much darker ends from the get-go, and my several inches of roots went red easily, the middle section didn’t quite match after one round. But Angelica was extremely fastidious, and hot damn was it ever worth it. I really think she got my hair to one of the best shades of red I’ve seen on non-natural redheads. I couldn’t be more thrilled with it!

And obviously I haven’t washed it yet, hence the mostly straight ‘do. It’s amazing that with all that processing, my hair is actually still in great condition. But I do remember from all my years of two-process coloring and bleaching that my hair is pretty resilient. (Well, when I’m smart enough to have a professional do it. We don’t need to talk about my late teens/early 20s.) 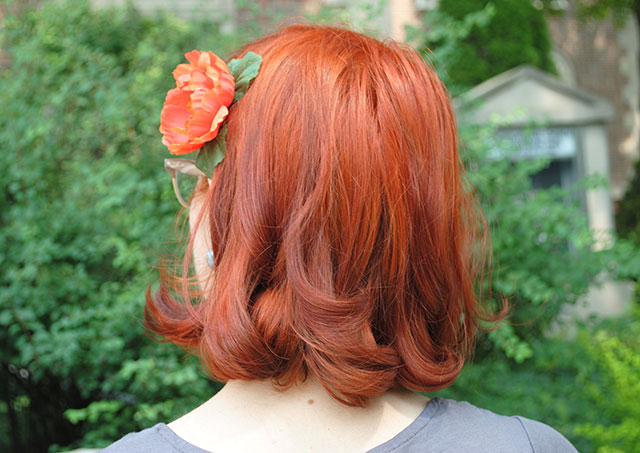 I’m not sure what’s stopped me in the past from going red, as colors that have to be touched up regularly hasn’t ever stopped me, so it couldn’t have been that. Frankly, I think it must be because I don’t have that typical peaches and cream complexion that natural redheads usually have, so I just never thought it would look very good on me. This might have you scratching your head a bit because I think my skin tends to photograph more neutral and a bit more fair than it is in real life. And while my skin is pretty fair, I definitely have a yellow undertone.

So that yellow undertone plus the gingery red hair colors I coveted… that always worried me. 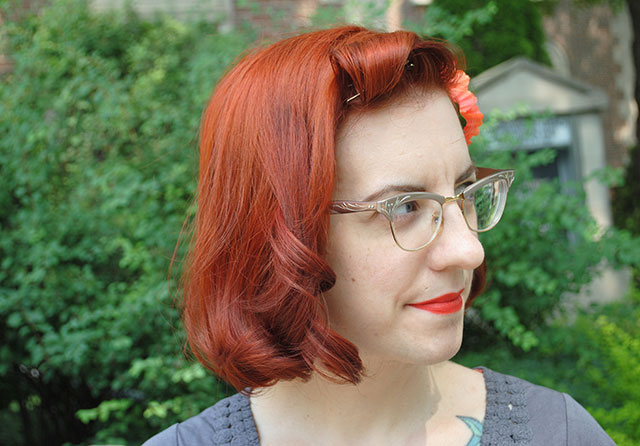 But I think it worked! I’m certainly not trying to fool anyone into thinking I’m a natural redhead, by any means. But I just didn’t want it to hideously clash with my skin, you know??

I did a lot of research before going red, so I’d have an idea of what I was getting into. I was prepared for the fact that I may need to make a few wardrobe and cosmetics changes to make it work better. I bought copper bobby pins today at Sally Beauty—omg, I have to get used to hiding them better, that was never an issue before, ha ha!

And the bright pink cardigan I was knitting? Nope. I held it up to my face today and it looks terrible. That’ll be frogged and started over in a new color. It’ll be fun learning what colors I like best on me now! 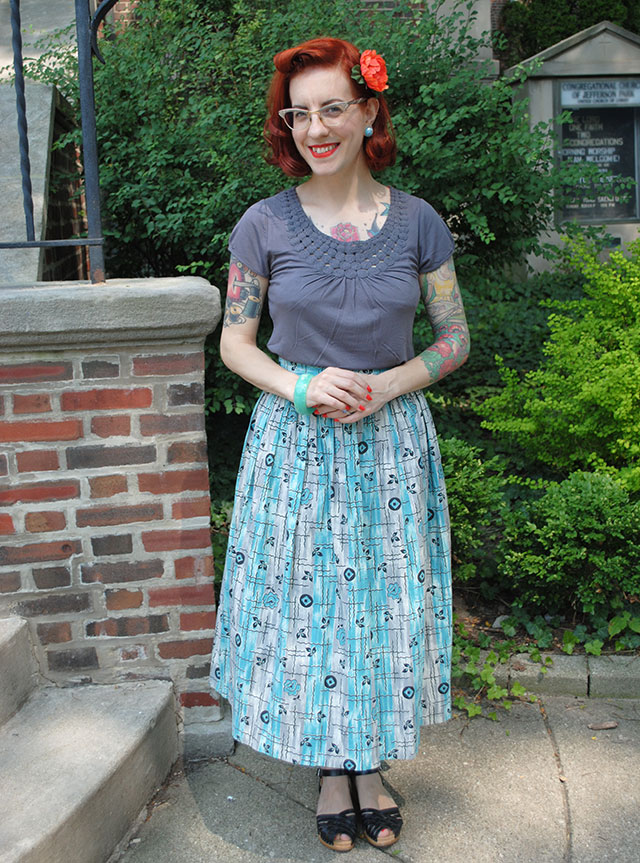 As for makeup, I only had to make a few changes. I already flip flopped between blue-based red and orange-red lipsticks as I felt like it, and I found that orange-red lips with my new hair color is a lot better than blue-reds. I also swapped my pink blush for a peach blush, which helped give me a bit more of the “peaches” part of that peaches and cream complexion that goes so well with red hair.

And last but not least, my eyebrows. I bought an auburn eyebrow pencil and a lighter brown brow wax at Sephora today, instead of using the medium brown powder and wax that was my previous routine (I don’t use much, just mainly to define a little and tidy things up).

I was honestly pretty worried about my eyebrows looking too dark, but I also didn’t want to lighten them, so I’m pleased to find a good middle ground. Not that you can really tell, but the touch of auburn helps a lot, I think. Though quite frankly it pretty much looks exactly the same as before unless I’m in broad daylight. But whatever, hey, it makes me feel better! 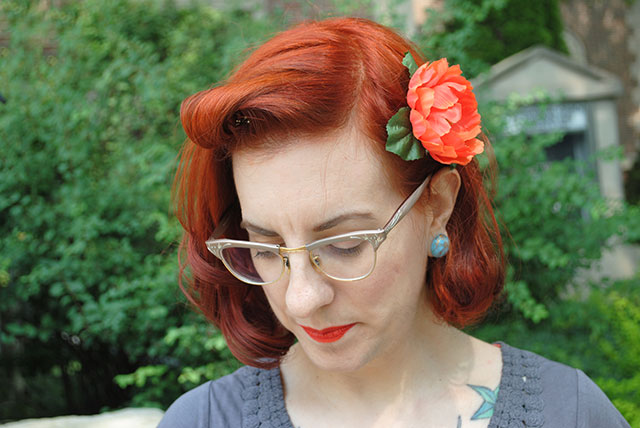 And just for fun, even though the photos weren’t taken in exactly the same lighting (try as I might, I couldn’t find a “before” in the same kind of lighting), here’s an idea of the minor makeup tweaks I made for my new red hair. 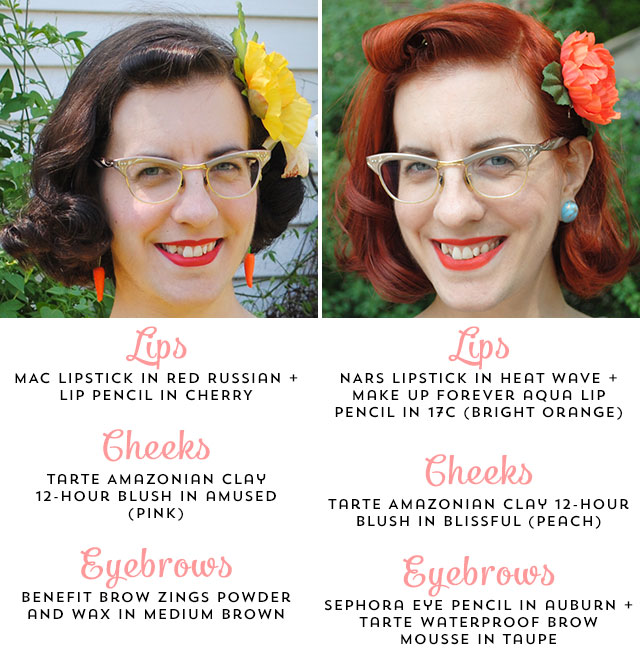 Thanks for all of the awesome comments on my sneak peek on Instagram last night! ♥ ♥ Now you can see what it really looks like!

It’s only been one day, but I definitely think red is here to stay for a good long while. Hey, I’m already getting used to not jumping every time I see my reflection in the mirror. Ha ha! And I’m pretty excited. See? I’m so exited I do cheesy things like this. 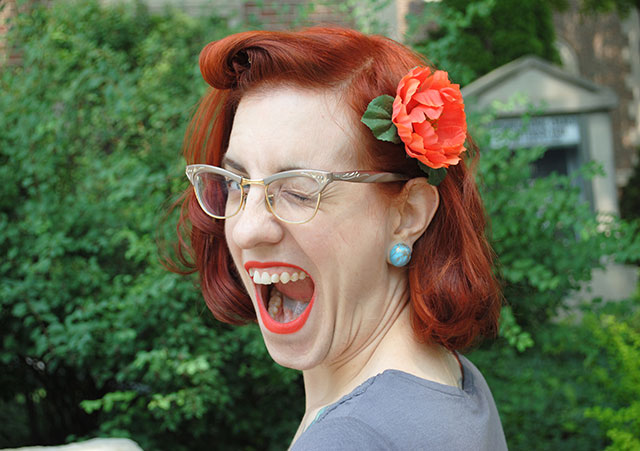 Safe to say I’m loving being a new (fake) redhead! 😀 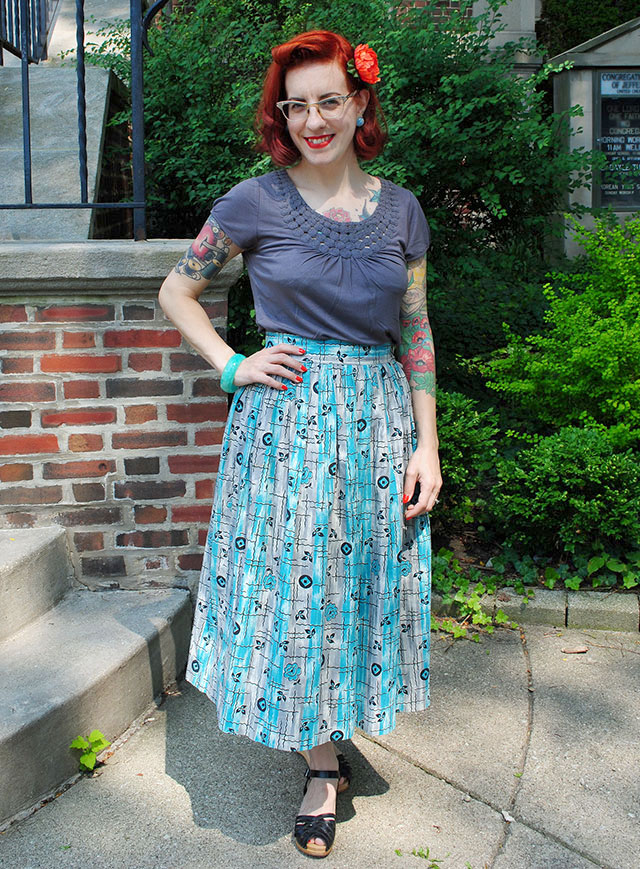