Hello everyone! By now we’re almost into our third month for the Knit for Victory knit-along. There’s already lots of works in progress and finished projects in our Flickr group and our Ravelry group, it’s wonderful seeing what everyone has been working on!

As you may recall, my personal knitting plans were to knit my own Victory beret (since I gave Rochelle, my gorgeous model, the sample, which I’ve seen her wearing tons! ♥), as well as to work on and hopefully finish my long-sleeved version of Susan Crawford’s Wartime Farm pullover. Unfortunately the shoulder problems I was experiencing earlier this fall that sidelined me from knitting colorwork for months has once again cropped up. (It’s something about knitting with a strand in each hand, and I only knit Continental style/picking when I do stranded knitting.) So I’ve had to put my own stranded projects on hold!

After finding a project I could work on without pain, I came up with a good plan and am moving right along with my alternate project, which I’ll talk about soon and share some inspirations! However what it means right now is that you may not get to see my own partially-complete Victory beret until after the knit-along, and the same goes for Wartime Farm (which is a pullover and of course needs a lot more knitting than a beret). I’m sad to say that, but I can’t work on something that’s causing problems for me of course. 🙂

On the bright side, this is really the last follow-along post you’ll need for those of you knitting my Victory beret, so even though you won’t get to see my finished version (I ended up swapping two yarns out for another brand to match something in another small future design), I can still walk you along here!

Let’s get down to business!

Working with the chart

If you’ve worked any lace or pattern stitch or colorwork, you’re familiar with using charts and you probably won’t need to read this post, so I’ll see you next time! However if it’s a bit new to you, you may glean a bit of help here.

After you get through the ribbing and the first increase row (sizing up to your larger needles if you opted to size down for the ribbing), the pattern tells you to start working on the Hat Chart.

Of course, Victory is knit in the round. That means you’re only working on right-side rows… there are no wrong-side rows. And the chart reflects this! You’re going to read it from right to left on every single round. Unlike knitting flat, when you can kind of keep track in your head that the even and odd rows are either RS or WS, you can’t do that with a chart for a project in the round, so it’s just something to keep in mind.

I’d highly recommend placing some kind of marker on your chart to keep your place! It’s downright imperative to me, personally.

If you print out the pattern, you can use removable highlighter tape (something like this), or a magnetic chart holder and strips, like this chart keeper from KnitPicks. Craft stores also usually sell a plain magnetic board and magnetic strips, too.

If you go digital, use an app like GoodReader that allows you to open and annotate PDFs. This is my preferred way of using charts these days. I can reposition a little bar above the row I’m working on, and just move it as I go along.

Where should I mark my row?

If you’re using a method that involves putting a marker (magnetic or digital) above or below the round you’re working on (obviously not necessary with highlighter tape), it’s personal preference whether you put your marker above or below. I choose above. Why?

By placing the marker above what I’m currently working on, I can see all the rows below it. When working a complicated chart (colorwork or otherwise), it’s extremely helpful for me to see what I’ve done below my current row. It’s extra insurance to make sure I know things are lined up. If I’m blocking the view of the previous rows with a magnet or a line in my app, then I’m blocking out some of the view of what I’ve done. I used to do it this way and found my knitting speed and accuracy increased when I was able to see the rows below. Of course, your mileage may vary.

In the Victory pattern, there are two charts, the Hat Chart and Crown Chart. And you’ll notice they don’t have the same number of stitches. When you first glance at the chart you may think that’s a mistake, but when you’re reading through the pattern you’ll see it’s because there’s a decrease round between the charts. This round doesn’t shape anything in the beret per se; it’s purely to get you to the right stitch count for the second chart. (I got this idea from Alice Starmore’s Book of Fair Isle Knitting.)

So simply finish up the Hat Chart, then follow the written pattern until it tells you to start the Crown Chart. (There’s just a couple of rounds between the charts.)

What happens when the Crown Chart starts getting all crazy shaped?

Now if you haven’t knit a lot of hats, the Crown Chart may look kind of… different. Why is there a line up the center, where did the rest of the squares go?

It’s not as crazy as it looks, I promise. All it means is that it’s time for the centered double decreases that shape the crown. Whoopee, things go much quicker from here on out as the beret starts getting smaller!

A centered double decrease is simply another method of decreasing, like a k2tog or a ssk, except that it turns 3 stitches into 1, instead of 2 stitches into 1. You can see the nice decrease lines radiating out from the center of the crown. 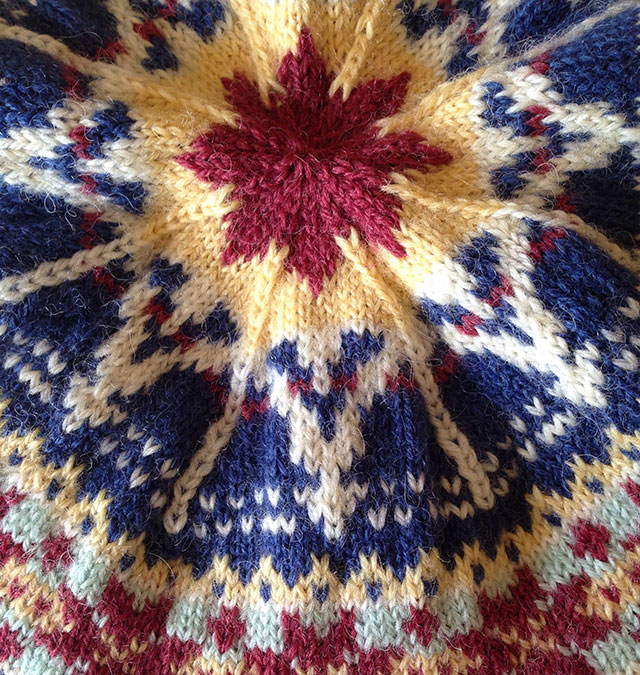 There are a couple of different ways to work centered double decreases, but in Victory I use s2kp. That’s worked as follows – slip next 2 sts together knitwise, as if working a k2tog; k next st, pass slipped sts over.

And just like it says in the Chart Key, you work it in the color indicated in the square for the s2kp on the chart. 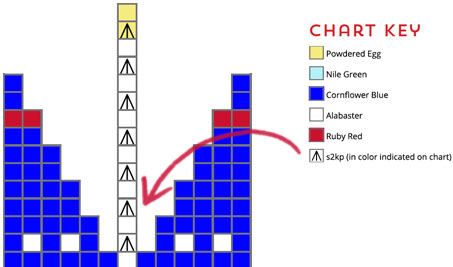 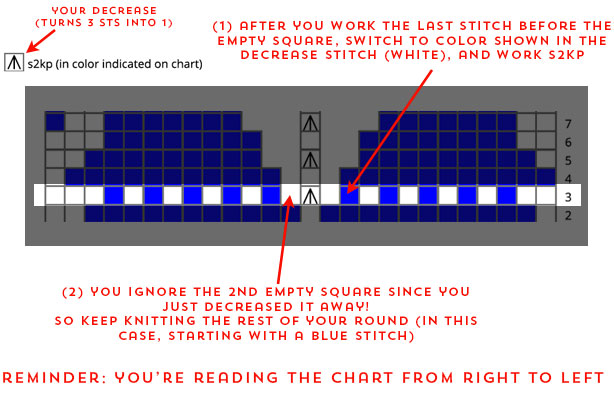 The idea of empty squares on charts is a little bit of a head-scratcher until you actually get to that round and do it yourself, at which point the lightbulb will go off. It makes much more sense when you’re actually knitting it!

You’ll find the crown goes quite fast as you’re decreasing away many stitches every other row. As it gets smaller, if you were knitting on a circular needle you’ll find at some point you have to switch to whatever way you prefer to knit a small diameter in the round… splitting the stitches between two circulars, Magic Loop, or DPNs.

Catch up with the Victory beret: