Yesterday was the Vintage Bazaar in Logan Square. It’s what they call a pop-up flea market and has been held in different locations. It’s an event that I somehow didn’t know about until May, and we were unable to attend the last one. So this was our first time.

It was held in and outside an old historic theater, the Congress Theater. Sadly I have no photos from the event except one! It was a drizzly, humid, dreary day and I didn’t feel like taking my nice camera. So when we were on the inside, it was really too dark to capture anything well with my point-and-shoot, and almost the entire time we were outside it was raining (and the brief time when it wasn’t raining we were talking to friends).

The venue was interesting. The Congress Theater is really a neat place, a good example of a slightly decrepit movie palace, built in 1926. Here’s the one photo I have of the old boxes. Pretty amazing. 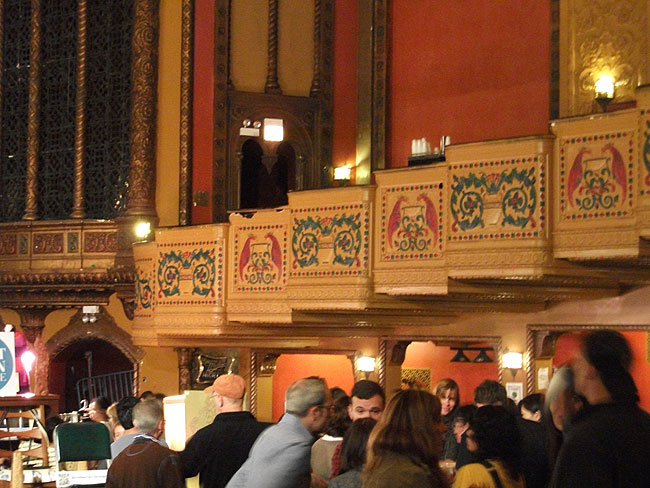 In its modern incarnation, it hosts a variety of events from concerts to roller derby to pop-up flea markets. It’s rather dark inside but apparently they worked on the lighting a lot compared to the last time they had it at this venue, and I certainly didn’t find that the lighting impeded my ability to shop. What was a bit overwhelming was that it was crowded. Really, really crowded. I love when I get an opportunity to shop for vintage things in person (as opposed to just online), but it can be a bit frustrating when you have to literally wait for half a dozen people to move so you can even enter a booth. But on the other side of the coin, I was thrilled there it was completely packed with people of all kinds wanting to buy vintage goodies!

Inside the theater itself, the vending space was packed very tight, even though I felt the setup didn’t quite make full use of the space. There was a large amount of aisle space on the outside of the main vending aisles, so I felt like each booth could have been given another foot or two of space and it would have made the experience much nicer and easier for the shoppers. I couldn’t even make it to some booths because they were so crowded, and some I didn’t want to enter because I was carrying a purse and a shopping bag at that point and I was worried I’d knock over delicate housewares! Outside was setup more like a traditional show or fair, with rows of tents and tables and a bit more breathing room.

In terms of actual items being sold, I was impressed with the variety, and thought prices on most things I looked at were reasonable. There was clothing, jewelry, furniture, housewares, a little bit of everything. The clothing seemed more geared towards 60s and 70s which is not my taste but I think it suited the majority of the crowd well. And we still managed to find some gems. Mel got a great Filson vest from our friend Niki of BombshellShocked, and a nice heavy Pendleton-style shirt. 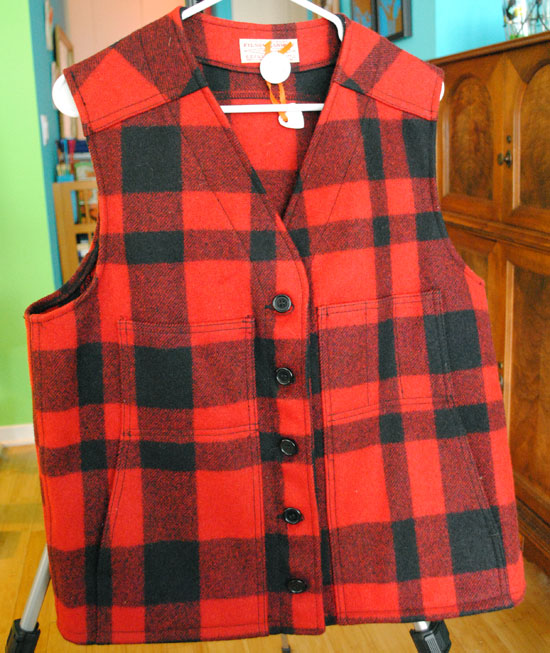 Remember my post on campus-inspired fall fashions? That was what I was really on the hunt for at the bazaar. Usually when I’m looking for something so specific I strike out, but not yesterday! I found two great plaid shirtwaist dresses from the 50s that will be perfect for fall. 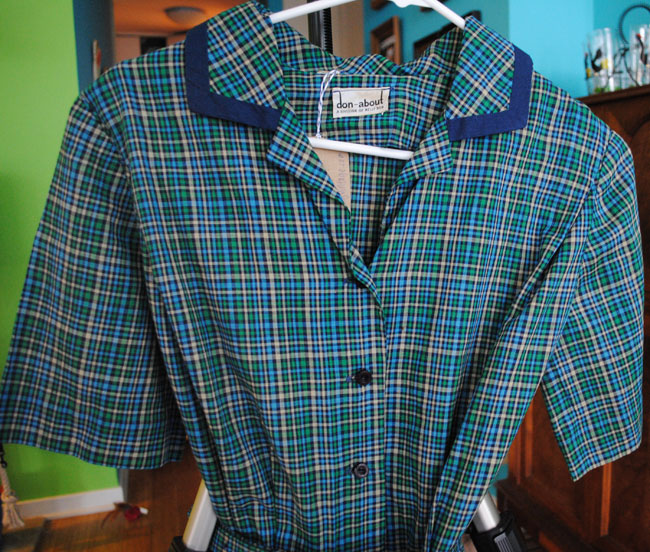 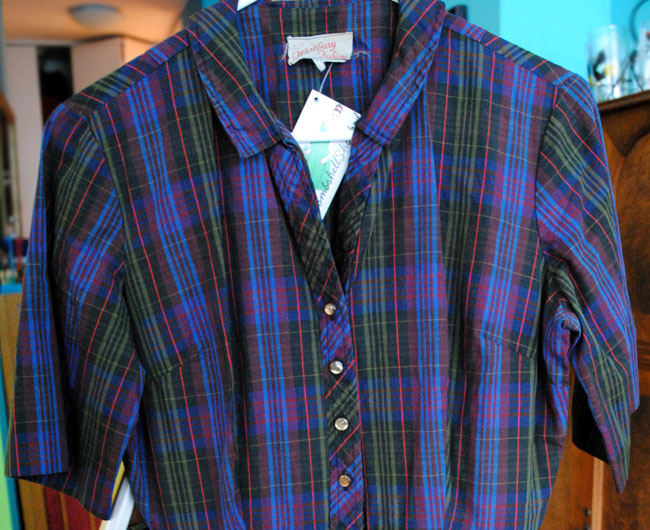 I also found a pair of navy and white saddle shoes from Sears (which coincidentally will actually work with both dresses). Not too dissimilar to the crepe rubber soled ones pictured in this Sears catalog page from 1949! 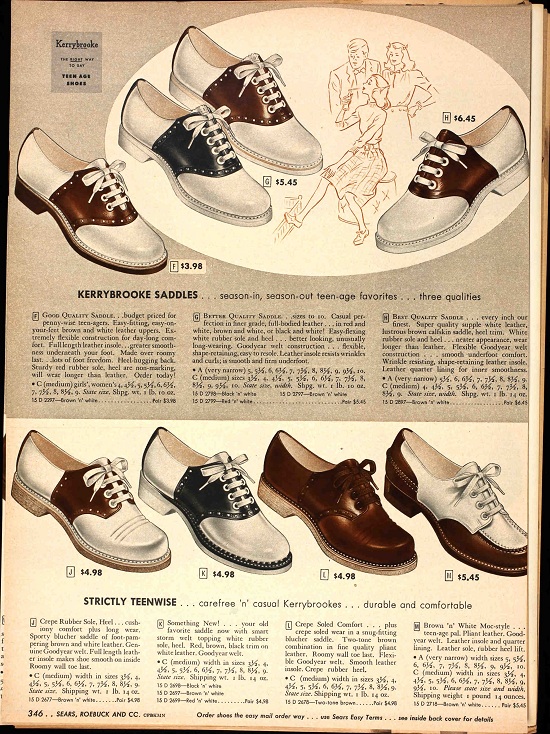 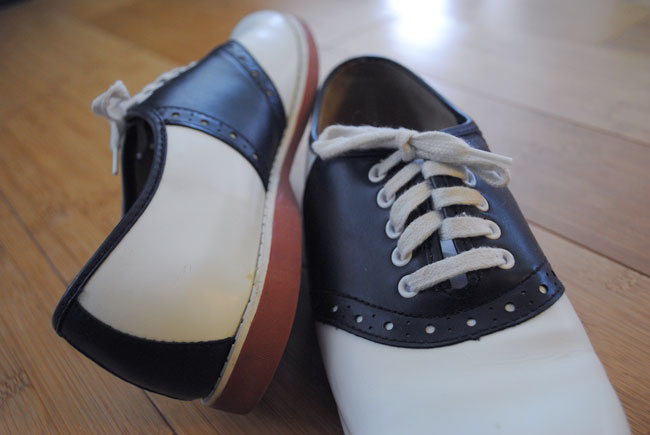 Considering the cost of those in the catalog was $4.98 in 1949, inflation would put the new price today at about $47, which is over twice what I paid. So I think I got a great deal! I had really been wanting a pair of navy and white saddle shoes, too, so I was thrilled.

Other than the shopping, the best part was seeing people. We ran into a few friends as well as meeting some other Chicago bloggers for the first time! I finally met Leilani of Thriftaholic, Maranda of Persnickety Vintage, and Lisa of Archives Vintage. Hopefully I didn’t come across too badly as the shy dork I really am, especially when I first meet people. Ha ha. I didn’t run into Liz of Zilredloh, however you should definitely check out her post on the Vintage Bazaar because she wasn’t camera shy and has a great round-up of photos from the event. The prize for the most flattering and funny interaction of the day went to a woman who literally poked out through a rack of clothing at the BombshellShocked tent to compliment me on my hair! I was able to let her in on a little secret (okay, not really a secret) that I’m currently writing up a hair tutorial that I’ll be posting in the next couple of days. 🙂 The whole thing was hilarious and I felt like I was in part of a skit on Rowan and Martin’s Laugh-In. It was awesome.

Now that being said, the rain and humidity did a hideous number on my locks as the day went on. Several hours later when we went out to meet friends, I realized along the way that I hadn’t gotten any photos of my outfit, so by that point my hair looked nothing like it did at the bazaar. So you’ll have to make do with this iPhone photo on the go of my outfit (and just trust that my coiffure was much nicer earlier in the day). If I look tired it’s because I had just woken up from a nap… hm, that probably didn’t help the hair much either. 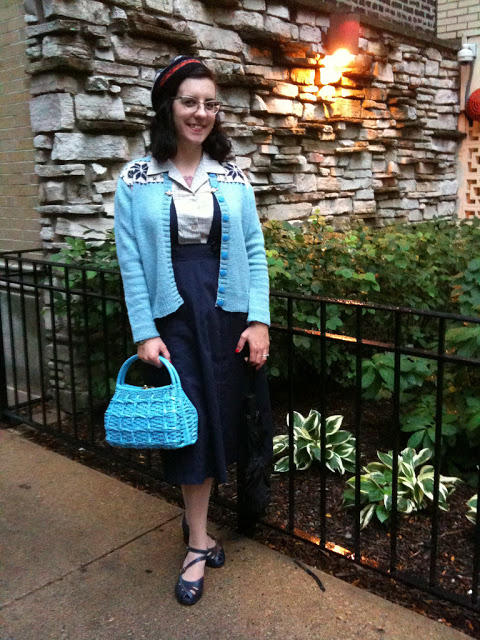 Outfit details include annoying-but-required umbrella, shoes by Rocket Originals, vintage plaid blouse, gold sweater clip and wicker basket purse, cardigan and beret knit by me (the beret is new and will be unveiled closer to Halloween, which is a hint on the theme, and the cardigan is knit from this free vintage pattern), and pinafore skirt sewn by Debora of TheBlackPinafore on Etsy.

All in all the Vintage Bazaar was a fun event and I’m looking forward to the next one!