I’ve been meaning to post this all week! Last Saturday, we went out to the ‘burbs for a huge annual vintage clothing, jewelry and textiles show. We missed last year (though I can’t recall why), so I was particularly excited about it this year. I was literally talking about it for days leading up to it. I took some photos of my finds, but mind you nothing has been ironed and I just threw them on, so forgive the lackluster appearance.

I got two dresses, one of which is a housedress with a hidden front zipper, so I will probably dare to actually wear it out into the world. It was so wrinkled that even the photo looked terrible, so I’ll give you a taste of the fabric. It’s a neat light beige checkerboard print with antique scrollwork type of designs all over. The buttons are really cute, too, and I love the attention to the lap over the zipper. 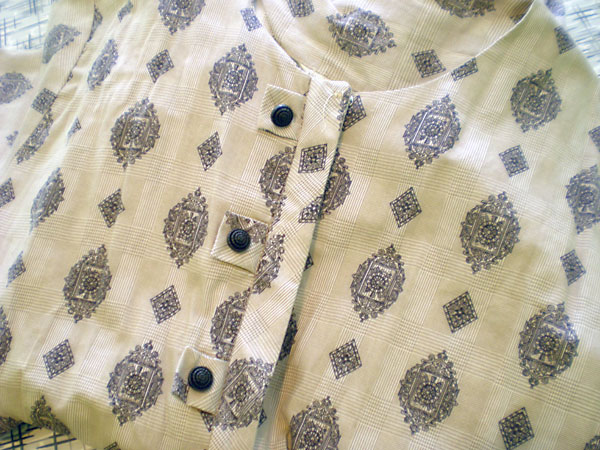 Next was a blue dress in an amazing almost deco print. I’m not sure what the fabric is, but it’s slightly stiff and sheer but very smooth, and rather unlike anything I’ve ever felt. Anyone hazard a guess? 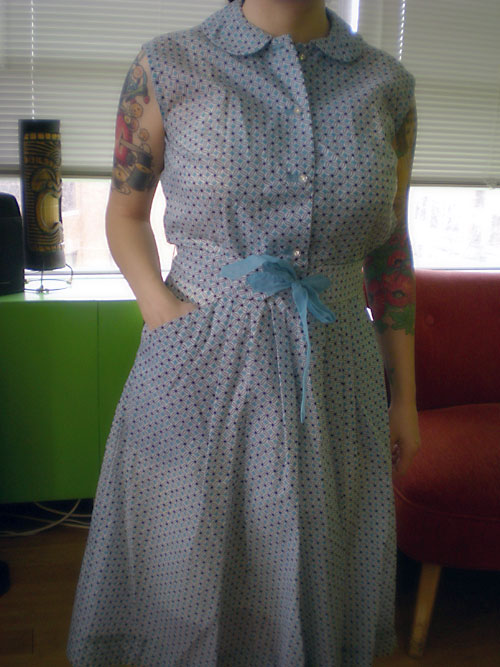 I love the rhinestone buttons. The self-face belt is tied off with sky blue organza (or something similar), which is also used around the buttonholes. That is some serious attention to detail!

I also found a great skirt, sold by the guys who run Knee Deep Vintage, a vintage clothing store across town that we’ve never been to. They were really friendly and are having an anniversary sale at their shop next Friday that we’re seriously considering going to. Randomly in conversation last night with a friend, we found out they’re apparently good friends with another friend of ours. Small world. They had a lot of killer dresses that were right up my alley but way too big, sadly. The skirt I got from them is pleated all the way around, giving it a nice full skirt feel without the need for a crinoline (because if you’re starting to get to know me, you might have guessed I’m not all that fussy of a gal…). It’s really, really making me want a pair of green shoes to go with it. Or espadrilles. I’m not sure how my wardrobe doesn’t have a pair of espadrilles. 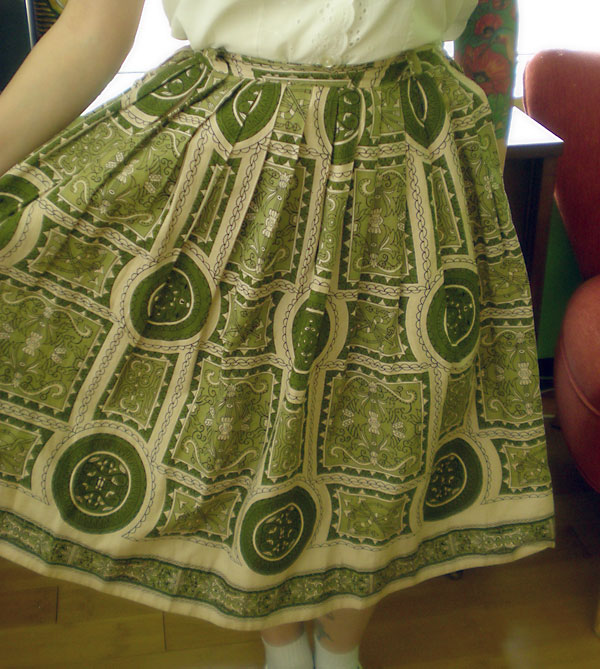 I then found a great cowboy shirt, which I am always on the lookout for and they are rather rare! I didn’t model it because, well, it’s a shirt. You get the idea. I love the texture of the fabric in this. 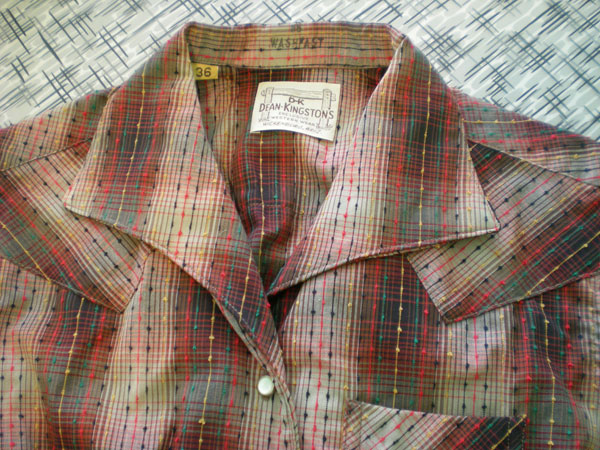 The buttons are really interesting. At first they look like pearl snaps, but are actually buttons with a front and back part, inserted through a second set of buttonholes. I’m not sure I’ve ever seen a closure quite like it. At first I thought perhaps it was a way for the band to be reversible, making it a unisex shirt, but the shirt is clearly for a woman, so I’m really not sure. 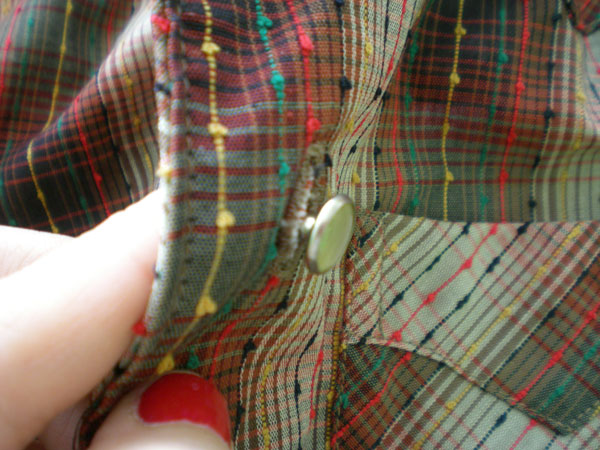 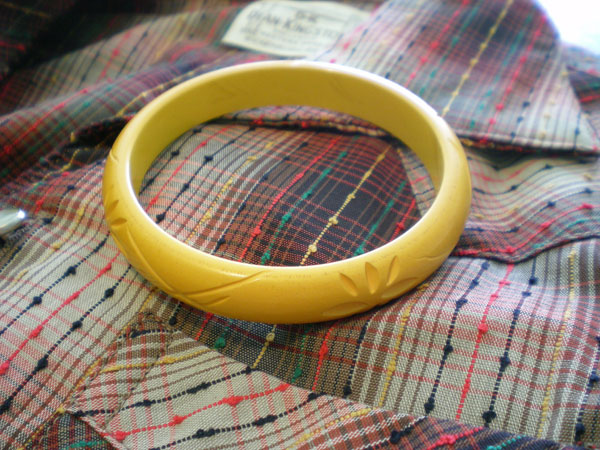 And then there’s the pièce de résistance. Towards the end of our tour through the event, we headed into a great booth, where I spied a Mexican circle skirt. Now, I love these as much as the next girl, but as you probably know, they can be ridiculously expensive. I have one that I was lucky enough to get from my mom, from probably a couple of decades ago when she thrifted several vintage pieces that are now highly collectible. It’s one of my most cherished pieces.

Anyway, I saw several Mexican skirts at the vintage show, all with the price tags I’m accustomed to seeing on eBay and Etsy. I seem to recall $95 was on the low end of the scale and $325 (I kid you not) on the high end. Then I spotted this one in the booth, and looked at the price tag. And it was cheap. And marked “as is”. I noted a few light stains, but nothing I couldn’t live with, especially at that price.  I am certainly not above wearing gently “whoops”-ed garments, especially if I can get a good deal. It adds a bit of history and intrigue for me, allowing me to play a bit of Sherlock Holmes (Jeremy Brett version, only) with my garments. What fun did the owner have in this skirt? What cocktail or kitschy appetizer did she spill on it? On the other hand, it makes me crazy when I see people selling items on eBay for high collector prices and then they proceed to show you a series of photos of rips, tears, holes and/or stains.

So behold, my new skirt. (Don’t mind the poorly tucked-in shirt, I was rushing.) 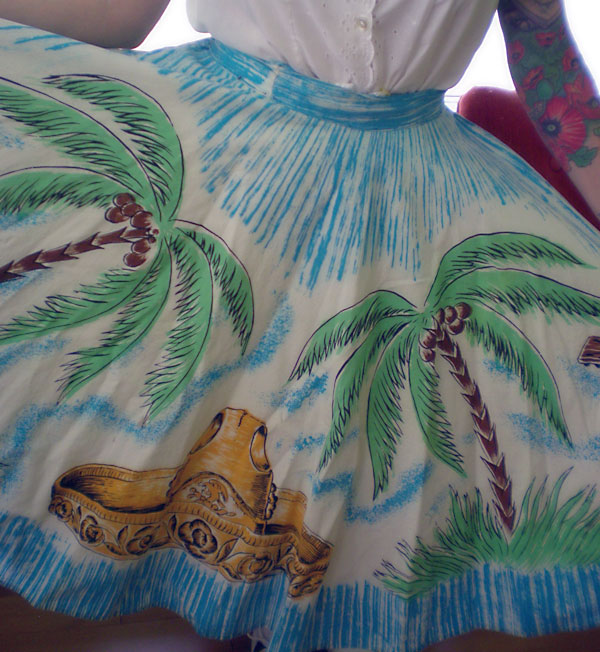 I talked to the woman who ran the booth for several minutes about it. She was super sweet and friendly (and obviously a very honest seller!), and runs an Etsy shop with several yummy items, Bombshell Shocked. My only regret was that I was too tired at that point to give the rest of her booth the attention it deserved, because I could tell she had some goodies in there!

When I was interested in the skirt, she said I looked like a woman who could wear a sombrero, referring of course to the skirt. Well, I was dressed in this jacket, so no wonder.

Pretty funny! (A woman asked to take my photo, so this is from her blog. The big white spot on the jacket is just a lens flare.) Even funnier, I saw two almost exactly just like it for sale there. I got sooo many compliments on this jacket at the event, I kept telling people there were other versions of it there if they wanted one too . 🙂

This weekend our plans aren’t nearly as glamorous. House cleaning, a few errands and I’m hoping to get in some sewing and knitting time. I have a skirt 99% complete and it’s just awaiting a closure. I’m thinking I may use a large vintage button, instead of hook and eyes on the inside. What do you think?

I’m really pleased with how the skirt came out, and will post about it soon (still have to photograph my Swing Dress anyway, lighting has been the pits in our home lately). My topstitching still needs some work, but overall I’m really happy with it, and the pleats make a spectacular shape with the somewhat heavier cotton I used. At first when I started it, I thought great, I’ve barely started my handmade vintage wardrobe challenge and I’m already violating my color palette. This is a cute cotton from my stash and it has a lovely novelty print, and I was itching to turn it into something. That’s all I was focused on. But then I realized hey…many of those castles and turrets are butterscotch yellow! 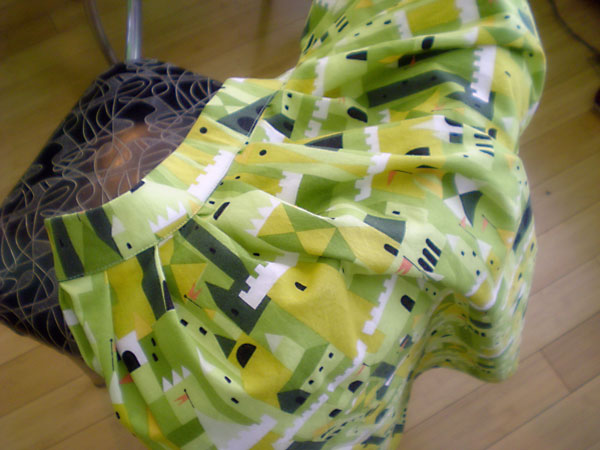 Have a great weekend, everyone!