I’ve been procrastinating on the blouse project I mentioned in my last post. I’m working on a slightly modified version of one of the tops in the vintage pattern Simplicity 3963. Just a simple little shell. I’m really trying to expand my sewing skills, so I decided I’d use this project to help conquer my fear of zippers. The last zipper I remember installing was in a pencil skirt I made about 7 years ago. Before that… might have been a dress I made in high school once summer when I was visiting my grandma. Clearly, I haven’t had a lot of practice with zippers.

I’ve been picking the brain of my friend Heidi all week about zippers. She is a class A (as well as classy) seamstress and always has a good answer for my elementary questions. I read up a lot online about invisible zippers, which is what I decided I wanted to install in this top. It seemed daunting but I was ready to go for it. Having basted both seams and pinned the first side of the zipper in place, and after psyching myself up for the task, I sat down at my sewing machine only to discover that what I thought was an invisible zipper foot was a buttonhole foot. (I have sewn buttonholes recently, so I have no idea what I was thinking.) Drat.

Heidi assured me that if I were careful, I could still use my regular zipper foot to sew in an invisible zipper. I initially thought that sounded scarier than I was willing to attempt, but two days later and I was getting antsy. Goodness knows I’m used to having a million projects going at any given moment, but this one has been taking up the entire dining room table and damnit, it’s hot here. I could use another sleeveless shirt.

So for about the fifth time I read through these instructions for inserting an invisible zipper and then used my Google fu for one more attempt to find a tutorial to help elucidate the process. Now, I’m not usually a big fan of video tutorials. In fact if you want the truth, I find it rather annoying that that days, half the time I want something written out I have to watch a video instead. But in this case, it ended up being this video that finally pulled everything together for me.

And I present you with my first invisible zipper. 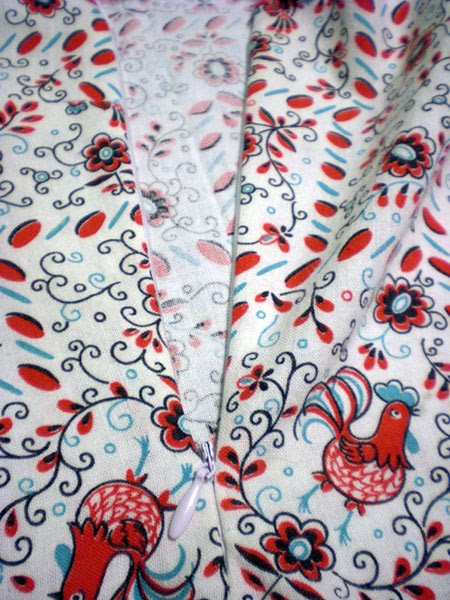 And I’m completely happy with it! I didn’t even end up with a bubble or gap at the bottom, either. I’m not fussy about the inside of my garments at all, so when I realized that on one of the sides my stitches were a little far away from the zipper coils for a couple of inches, I simply went over that area again, closer. No one will ever see the original stitches, anyway.

So perhaps this is a drop in the bucket for the more experienced sewers out there, but this was a big triumph for me. Now I don’t have to be scared of patterns with zippers! (And I grudgingly admit… for all my worry, that was a lot less annoying than sewing umpteen buttonholes.)

But I know, I know, screw the zipper, you’re really wondering about that chicken fabric, aren’t you? 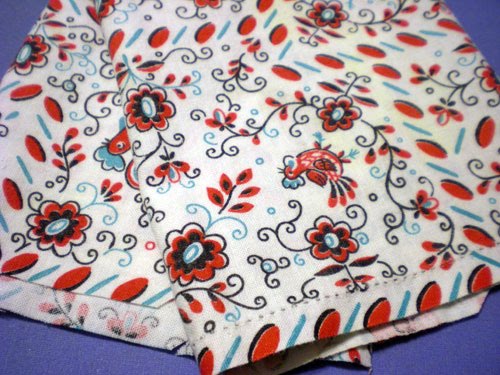 It’s a feedsack that I bought awhile back. Feedsacks are often very expensive for the (almost non-existent) yardage you get, and when they are inexpensive they’re often in poor condition. But I don’t mind minor flaws, so you can see the lightest bit of yellowing in a few spots on this one (and it actually shows up more in the photo than in person). I  just love the patterns on feedsacks so much that on a rare occasion it’s worth it to splurge a little for a great one. I definitely thought this qualified as a great one. Imagine a farmer’s wife in 1940 trying to get enough feedsacks in this fabric to make herself a dress!

I bought this one fully intact (i.e. it was still an actual sack) so I had to unzip the seams along the side. You can see the holes along the selvedge on the bottom right side. I opted to use bias tape around the neckline and armholes instead of facings (because I like the way it looks, and maybe more importantly because I hate facings, and not in a fear-of-the-unknown kind of a hate, more like a I-really-really-hate-facings kind of hate), so I have a little bit of this awesome fabric left. I need to come up with something really small for the leftovers. I might be able to cobble together enough for a contrasting collar or pockets on something.

Hopefully I’ll finish this over the weekend!