Maaaaany months ago, I made one of my most favorite things. And I’m just now finally sharing it! 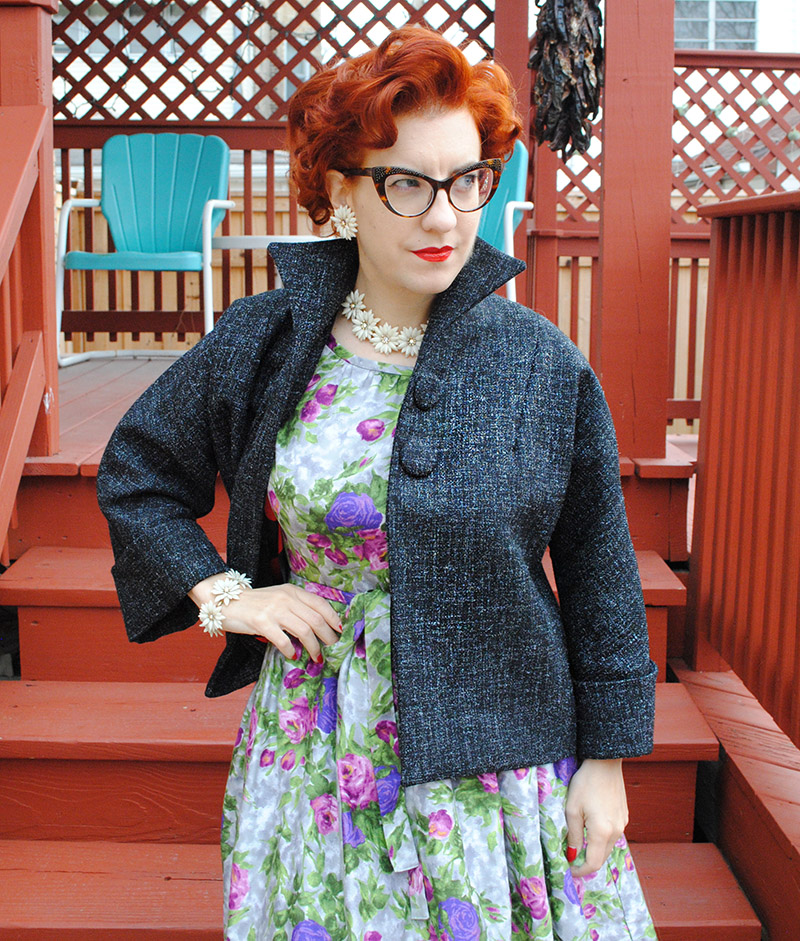 Technically, you got a glimpse of this before. When we went to the U.K. in April, I was wearing it in a few of the photos. It was the only jacket I took and it was perfect! (The dress went to the U.K. too and hopefully I’ll blog about it soon as well.)

Here’s one of my favorite photos wearing the jacket on our vacation, in the small town of Moreton-in-Marsh. 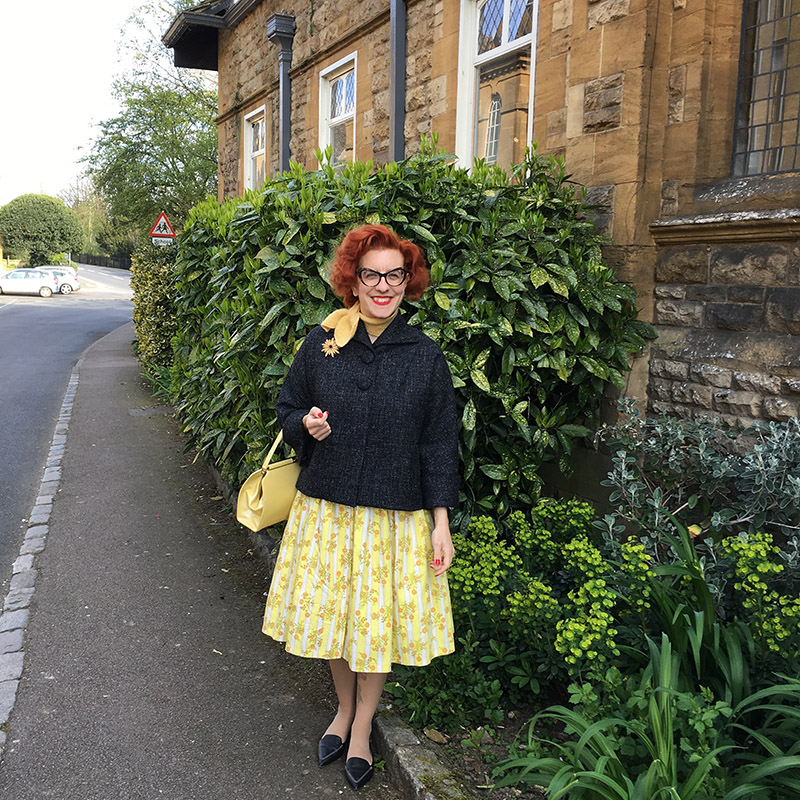 For my style, I really struggle with outwear that works for multiple types of bottoms. Pants and pencil skirts often work with the same type of jacket, but usually full skirts don’t. I didn’t have anything for fall and spring that functioned in that capacity, hitting all three. And that makes traveling really difficult for me, because I don’t want to have to stick to just one type of outfit. But I also don’t want to have to travel with more outwear than necessary!

Enter the short swing jacket, or swagger jacket as the pattern called it. It took me forever to hit on it, but I finally found a jacket I could wear with cigarette pants, a pencil skirt, or a full skirt. And I’ve worn it with each to confirm. Huzzah! 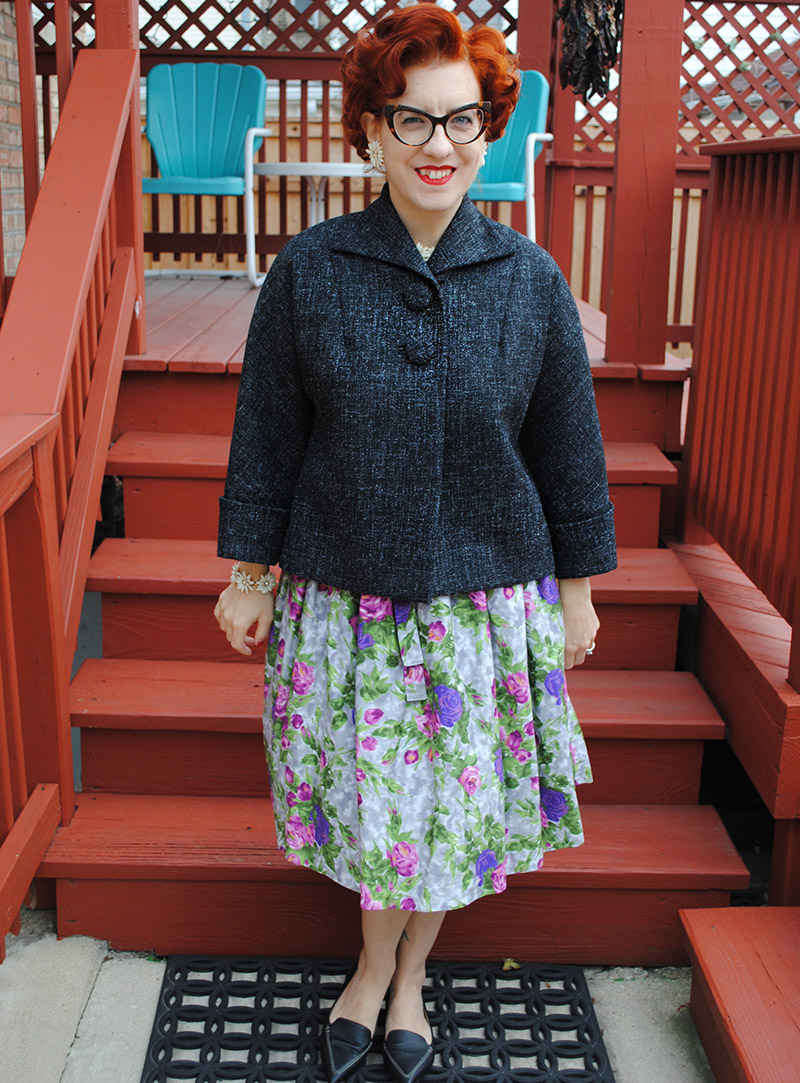 The pattern is Simplicity 3451 from 1950, and I did View 1, shown in yellow. I used a wiry tweed thin wool coating from Mood Fabrics (not available now since I bought it back in January, sorry) so it’s not quite solid black but still reads black enough to go with black accessories, if that makes sense. (Sometimes tweeds can confuse me like that.)

When I went back to review my notes I saw that I wrote I had enough leftover for a pencil skirt. Oooh! I should get on that! 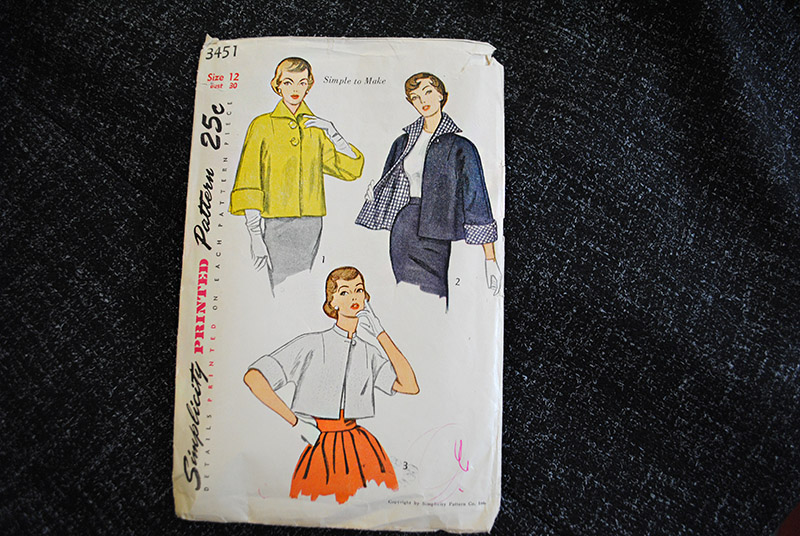 From the start of this project, I knew the dilemma would be the size, as I had to grade it up. Even doing so, when I tried on the muslin I realized I had some funky stuff going on in the collar area. Wish I’d taken photos to show you, it was weird. The shoulder were riding up on me, and the collar was sitting too far back on my neck. It was just… really odd fitting. I puzzled about it for awhile, until it hit me: I literally just sliced it down the center back and added width there. And all was resolved in that department! (Mostly… technically the shoulder seam could still be a little further forward but this bothers me not.)

I’m also glad I did a muslin because the top button placement was ridiculously high. There’s only two buttons, so you definitely want to get them right! And because this was actually my first time doing bound buttonholes, I did plenty of samples.

I used a little cover button kit to make matching fabric-covered buttons. I love the look but the button backs themselves are pretty chintzy, so I’m hoping they don’t come apart. So far, so good, and I’ve worn this loads.

There’s one funny thing about the collar that I realized, which is I thought it still sat slightly funky when it was all the way down and not popped up entirely or just with the sides down and back of the collar up, but recently I pulled out the envelope and realized that the collar isn’t meant to be folded down in the back at all. So I may go back at some time and re-shape the collar.

It’s such a great collar and it’s so much fun to pop it! 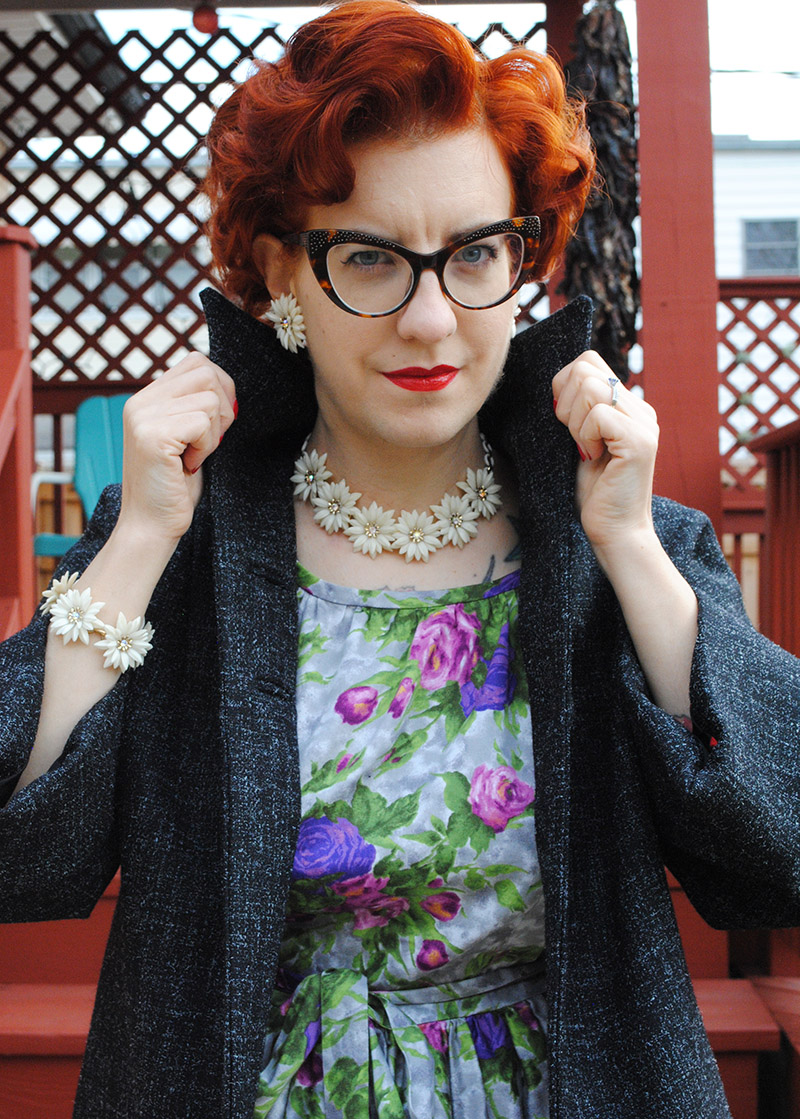 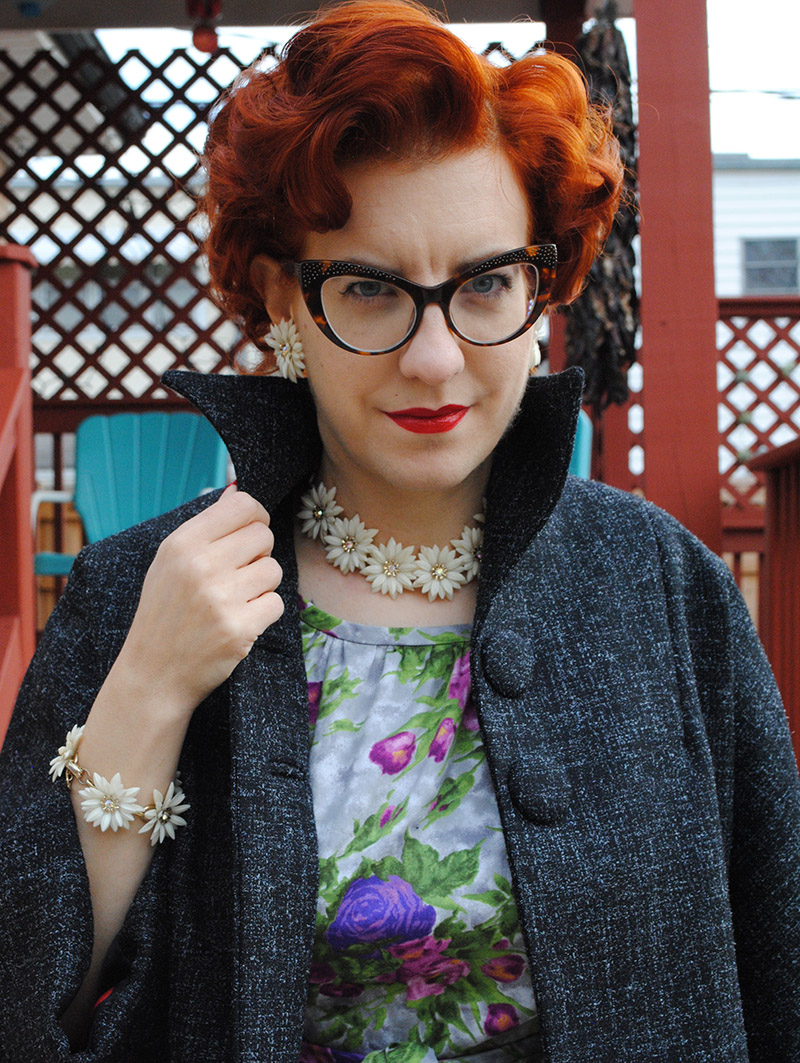 Let’s talk other fun features of this jacket—along with the lovely swingy shape, I adore the big folded cuffs (the photo below shows both splendidly). To keep them tidy I just invisibly tacked them down at the seams about halfway into the cuff, so you can’t see it. 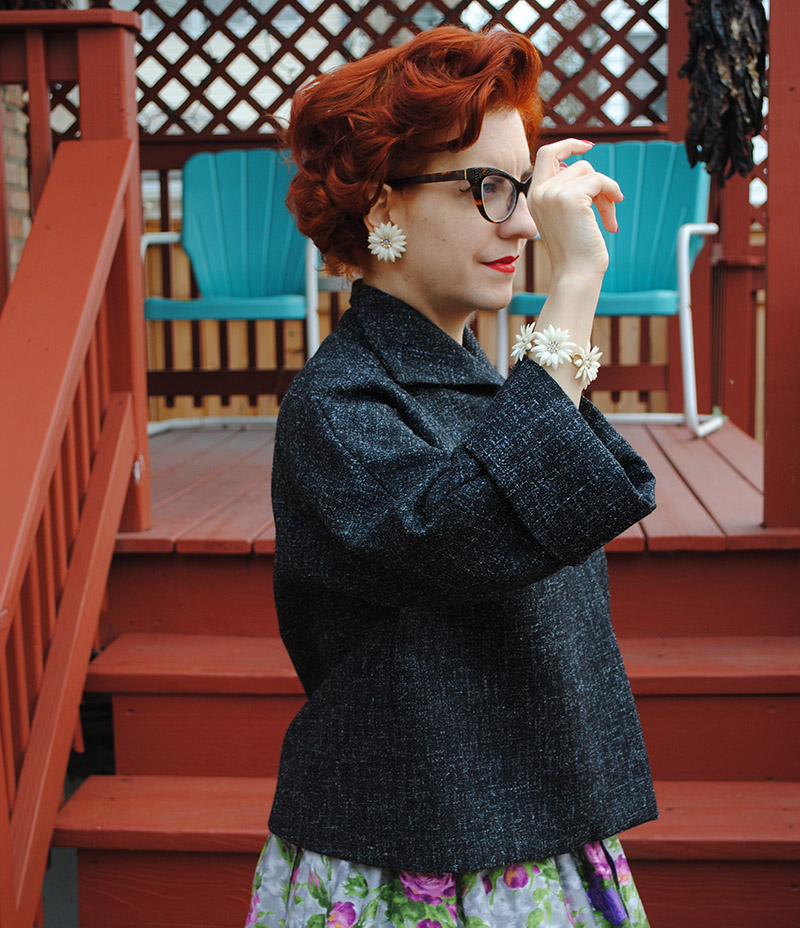 You can see the cut-on style sleeve below. So great on a 50s jacket! 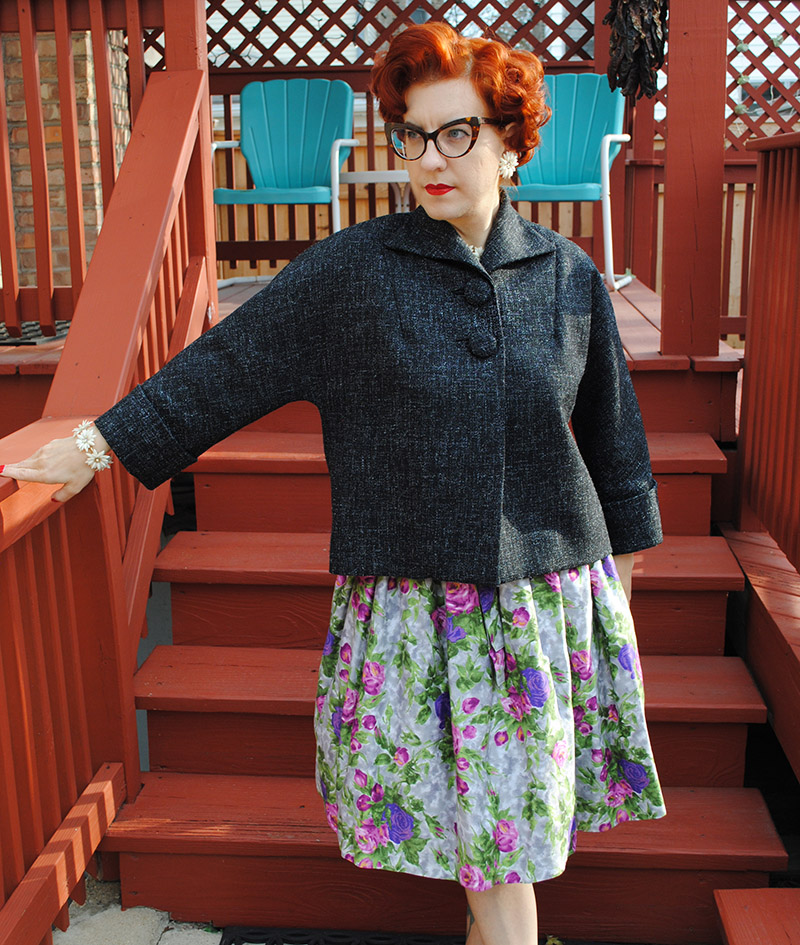 For some technical details, though I don’t have that many to share given that I literally made this 10 months ago… I  interfaced the entire jacket with fusible weft insertion interfacing (not that many pieces to this though: facing pieces and front/back pieces, since the sleeves are cut on). And I altered the front and front facing pieces so I could bag the lining. Speaking of the lining… 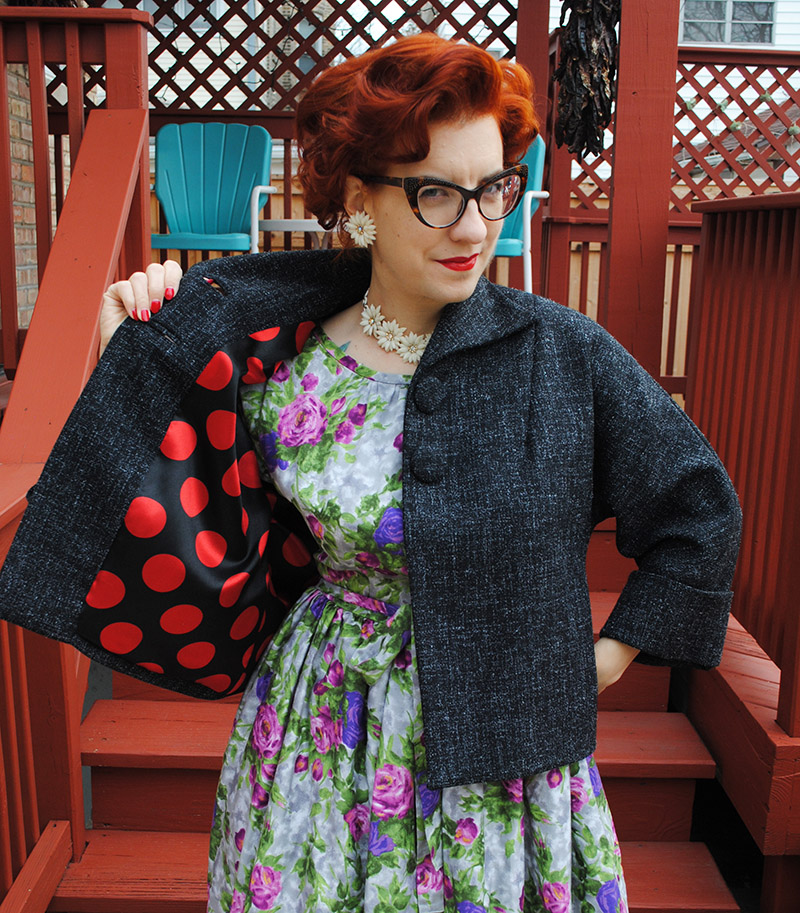 I’ve been wanting to do a polka dot lining foreeever and finally found some fabric! It’s just a poly lining, but I love the pop of those big dots! I can’t remember where I got it now. And because it’s a special touch I do whenever I’m making a jacket or coat, I embroidered in the back neck facing. 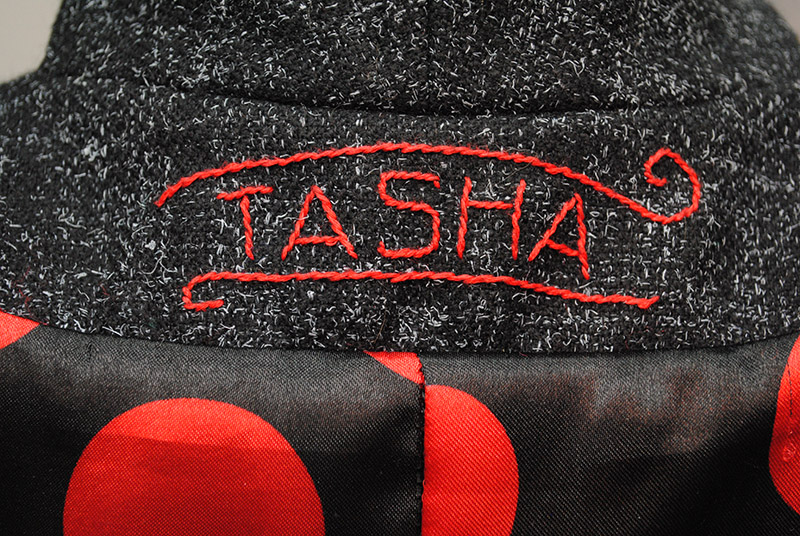 Doesn’t it all look fun from the inside? 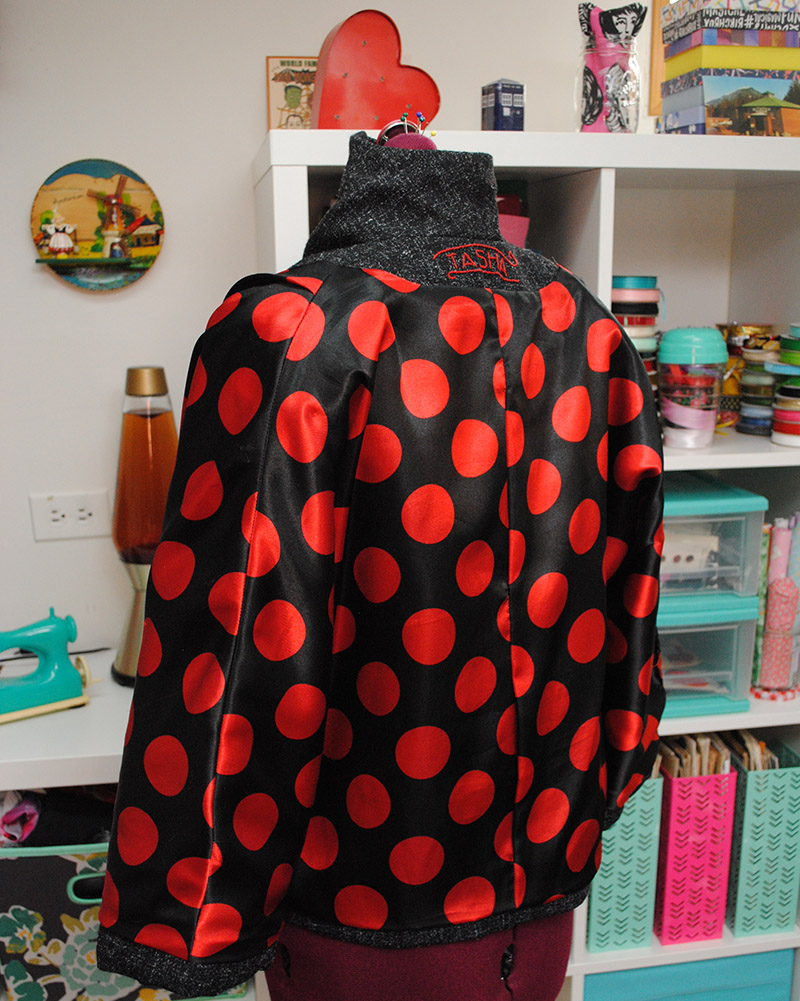 I’d say the only downside to this jacket is the fact that it doesn’t have pockets. And that’s because it’s so short. It’s not meant to. Inseam pockets would be too high up for my hands, and I contemplated adding single welt pockets towards the center front like you sometime see but decided they’d ruin the line. So that’s a small price to pay for a jacket I love so much and in a style I so desperately (even though I didn’t know it until I had it) needed.

And “love so much”… is really an understatement. This is probably one of the favorite things I’ve ever made. And I’ve already worn it a ton, so that makes it twice as perfect.

There will be more swing jackets (long and short) in my future I think. Oh yes, there will! 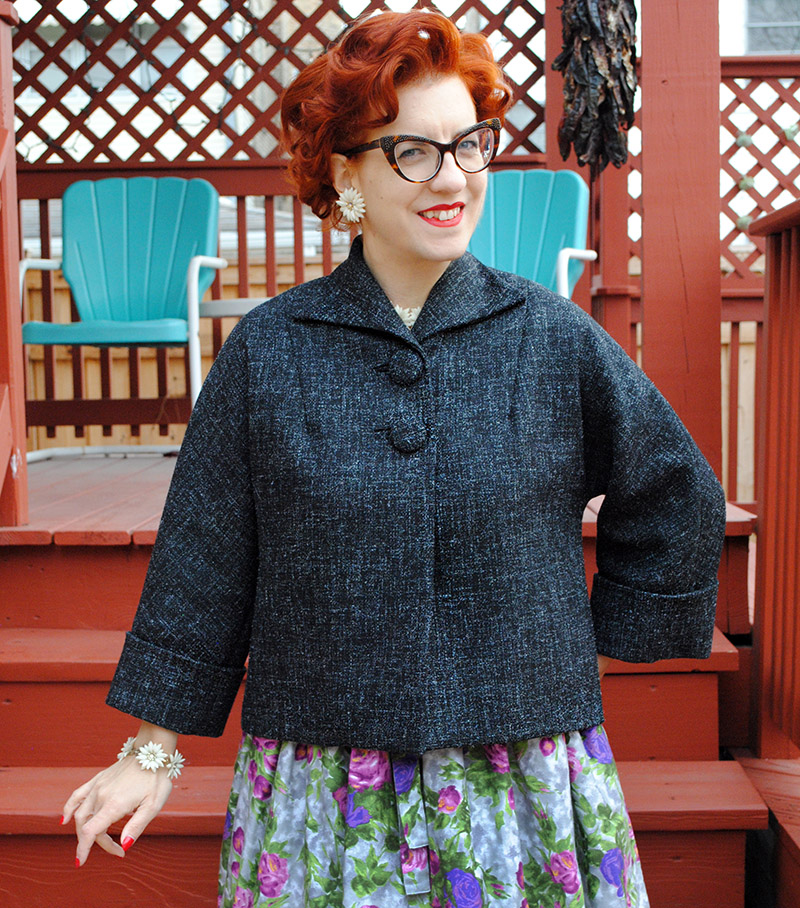 1950s swagger jacket – made by me
vintage wrap dress – made by me (not blogged yet but previewed in London, ha ha)
Coro jewelry set – Etsy
shoes – M. Gemi