Friends, ooh friends, am I ever behind. I’m behind but I have something small and fun to share nonetheless. 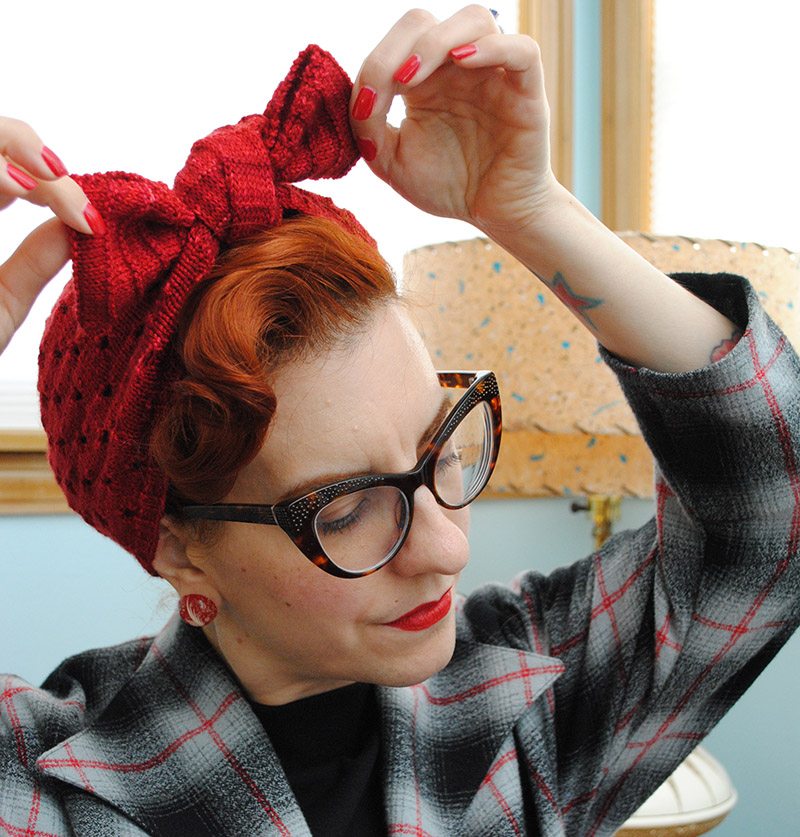 I’m so behind that I’m sharing a minor knitting project after not even yet sharing one of the most monumental pieces of knitting I’ve ever done, in time to wear at Rhinebeck (the New York Sheep and Wool Festival) last month. Following me on Instagram or Ravelry? Then you’ll know about that mystery project (pun intended). I promise, it’ll make it to the blog! Along with the 50s jacket I sewed last winter for London. And a couple of dresses I took photos of but never wrote up in fall. And probably some other stuff I’m forgetting. Ack! Now I’m making myself nervous.

But I’m here today because I finally managed to put together photos and words for a blog post, probably in part because it’s not very many photos. (Side note, that’s really been bogging me down mentally this year, sifting through 100 photos to find a few decent ones, but not being happy with the way I look if I have less to pick from, ha ha!)

We went on a mini road trip to visit family in St. Louis last weekend, and I needed a road trip project. I’d just frogged a bolero I’d started before Rhinebeck as I needed to completely re-work my math for the gauge I actually was knitting instead of the gauge I thought I was knitting.

At the same time I was frogging, it occurred to me that I could really use a cold-weather alternative to a head scarf, for days when I was feeling lazy about my hair or inclement weather wasn’t going to be friendly to a vintage set. What I needed was a turban. And I realized instead of casting back on the bolero immediately, why didn’t I just knit the thing I needed instead of the thing I wanted?

I had basically no time to make a decision before we walked out the door but I had yarn handy, a skein of beautiful red Sanguine Gryphon (yes before she changed to Verdant Gryphon) Skinny Bugga in Tomato Frog that had been in my stash for years. Because I had nearly no time to pattern hunt and I suspected the vintage turban I had queued would cover more of my head than I wanted, I decided to knit something I’d recently seen and I knew was for fingering weight, which was the Angel Face turban by Amy Appel. So that’s what I knit. 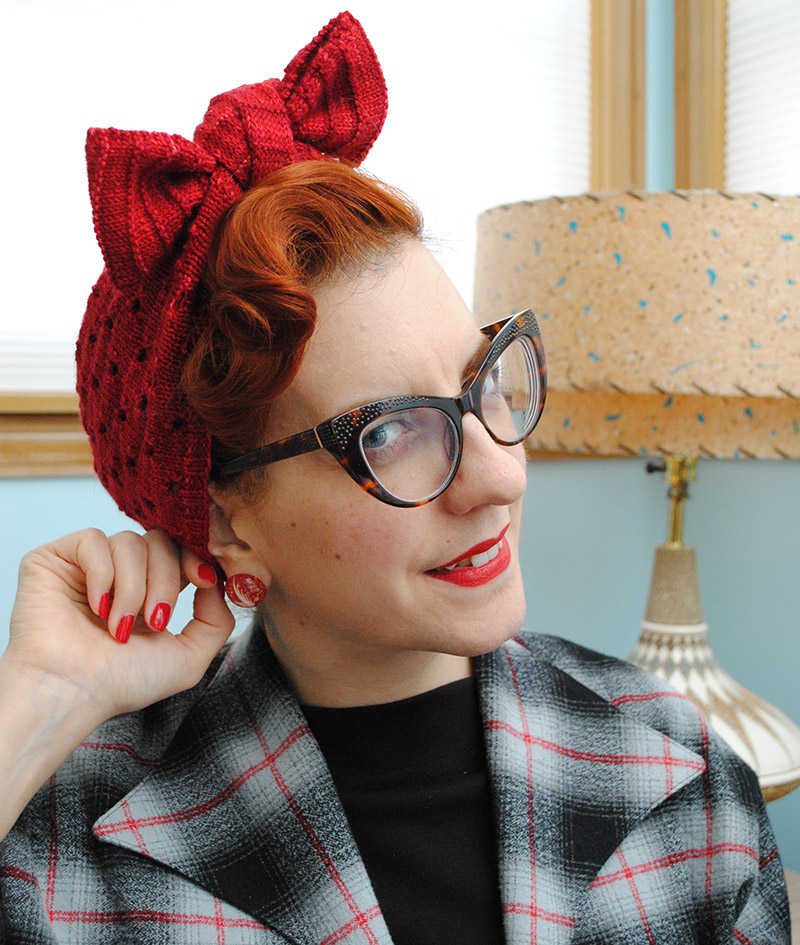 How cute is this?! It’s just what I needed. Once I tied the bow, I had a pull-on turban. For myself, I’m not a fan of turbans that cover all your hair (makes me think of Madeline Kahn in Young Frankenstein). They’re great on other people, but they don’t jive with my style. If I’m covering the rest of my hair, I want something in the front free. So this was just the ticket.

I don’t actually need bobby pins to keep it on my head but I think if I had longer hair I might, and I did use them when I wore this out the first time on Saturday just in case. But it’s into knitting, so you can hide them better than with a head scarf which is nice. 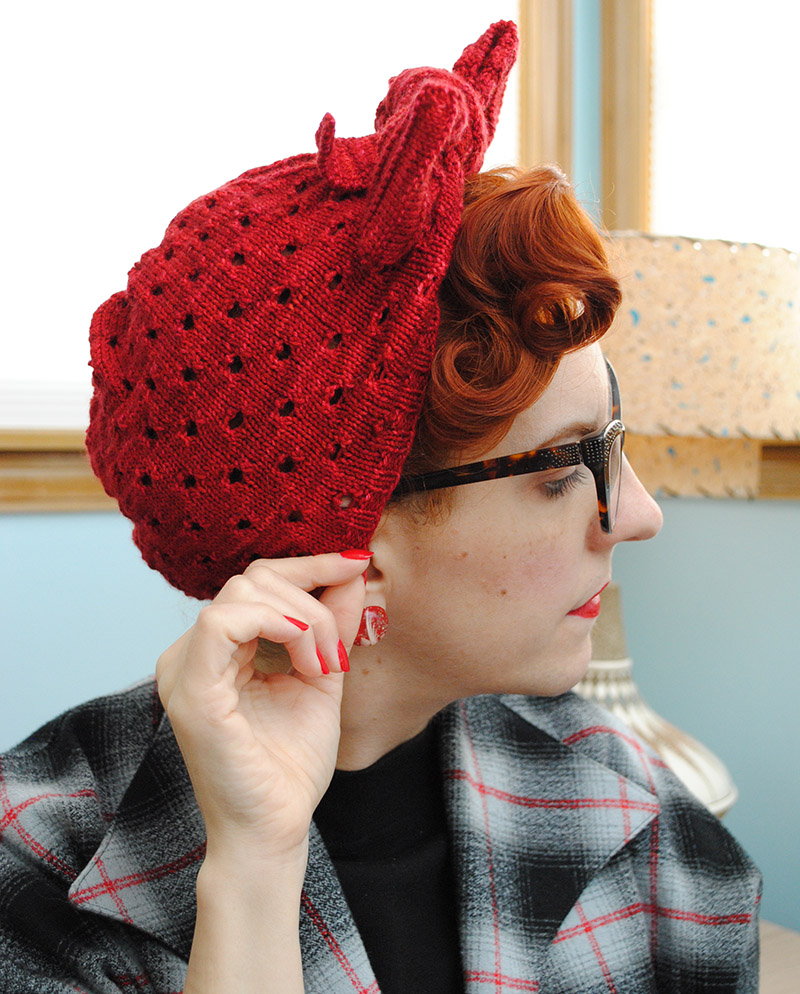 I like the placement of the purl stitch in the eyelet lace pattern as it almost makes them look like little hearts, especially in red! 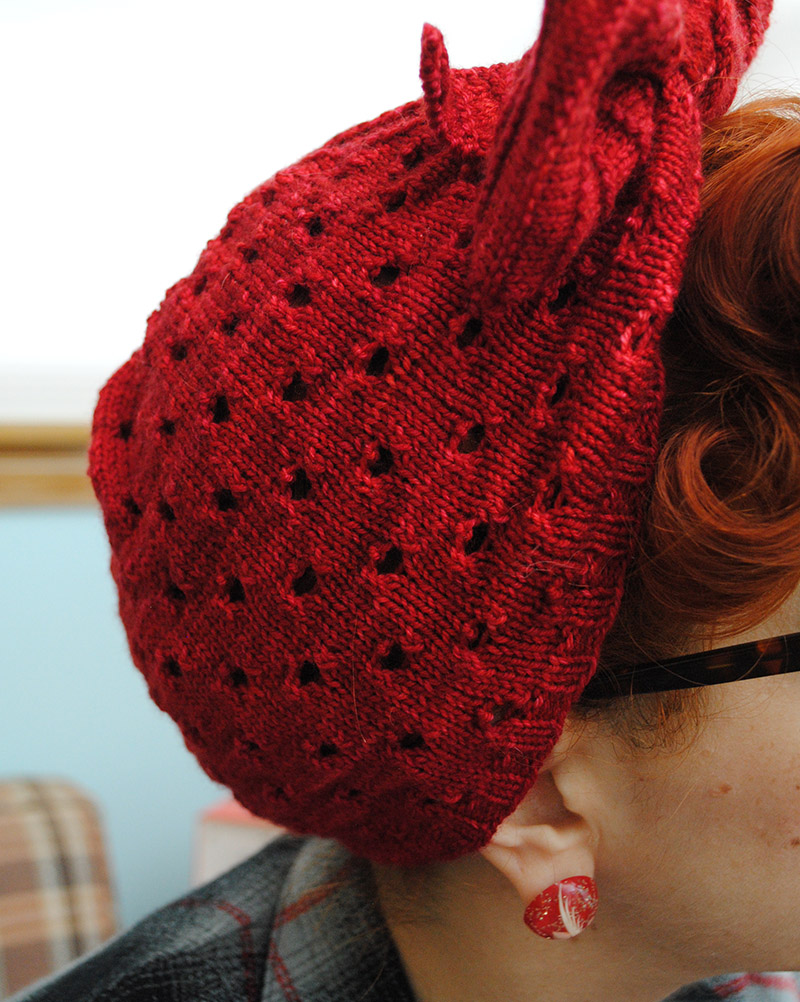 Here’s the top view, so you can kind of get a feel for how it’s put together. You knit from the part closest to your face back, then join in the round towards the crown, then pick up for the ties. It’s a clever construction, and I like the pleated ‘seam’ down the middle of the head. 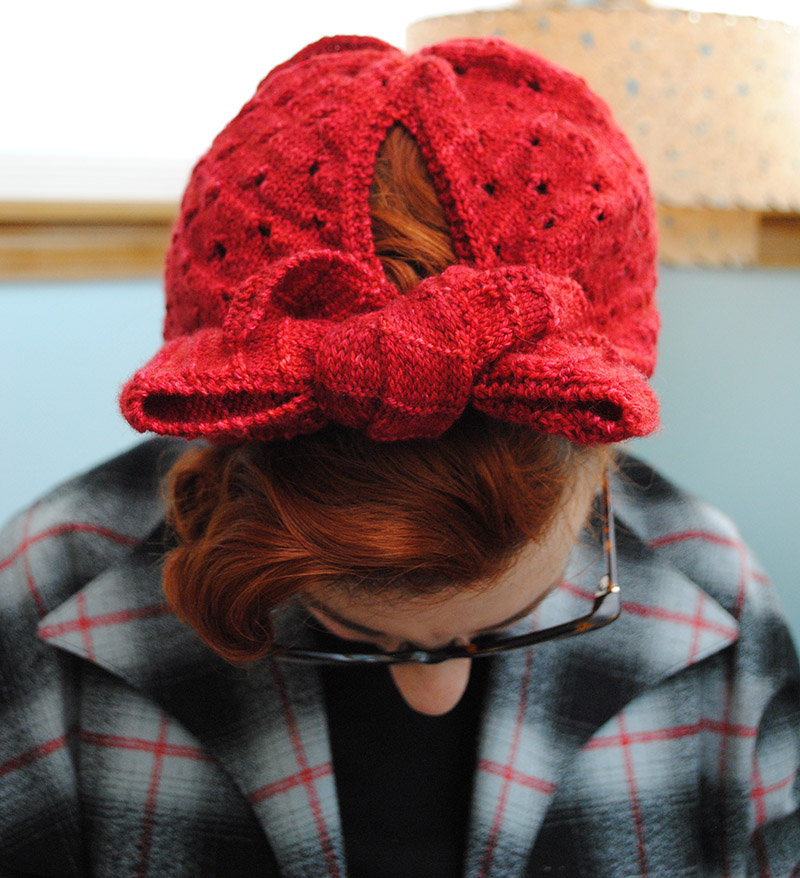 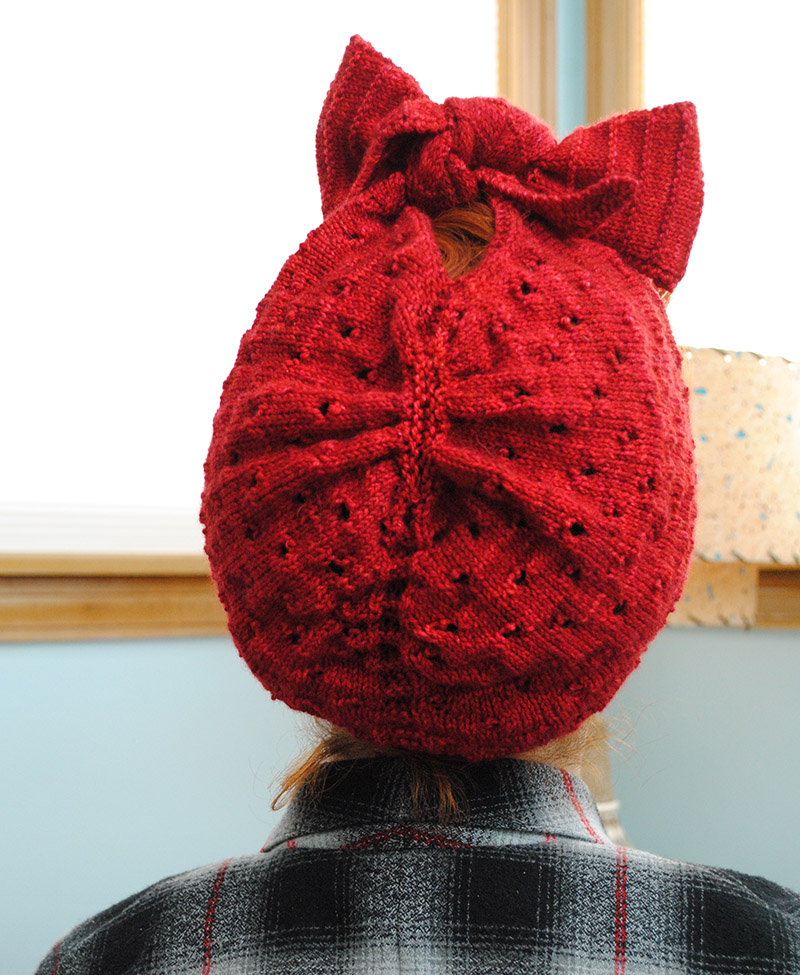 The only real tip I’d say for this pattern: watch your row gauge for the ties. I actually knit an entire tie before realizing my row gauge was too tight, which meant the tie came up short—about 10″ instead of 12″. I frogged it then spaced the increases out further (I worked the first 3 sets as written, then spaced them out every other repeat instead of every repeat). I ended up with 13″ ties which worked out great. 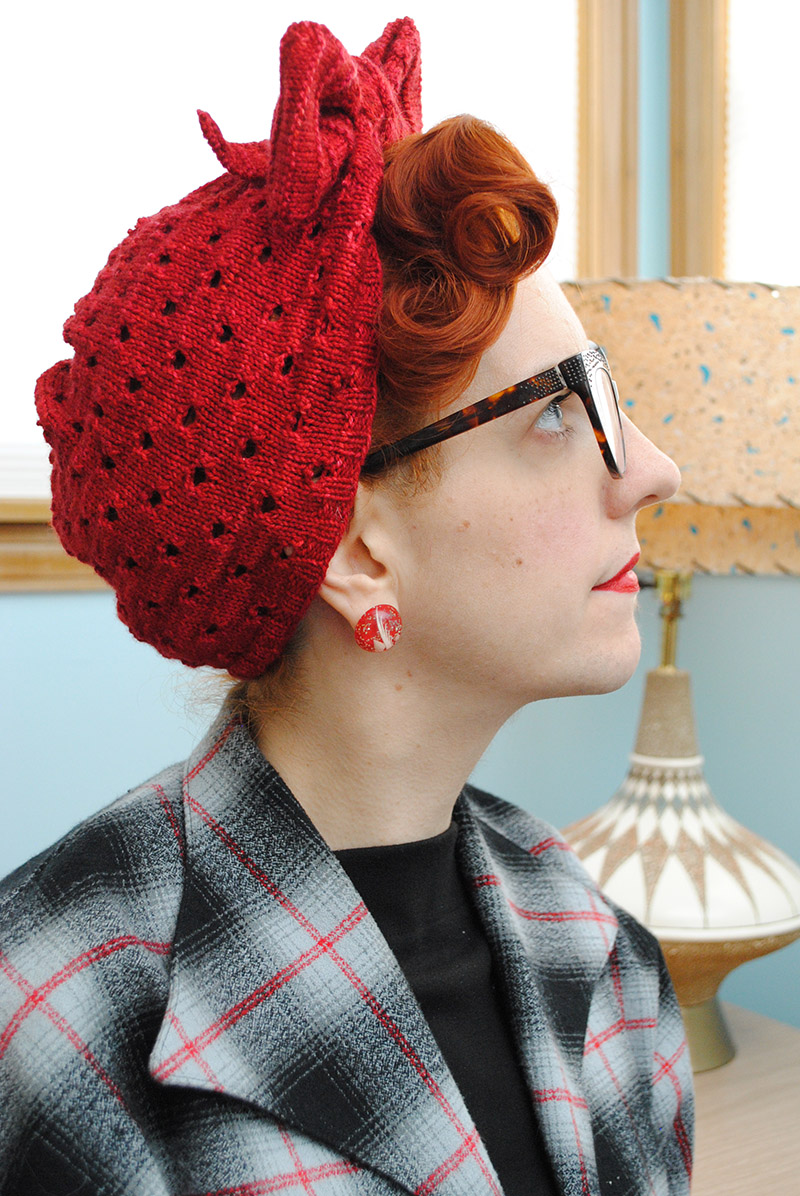 I really like that the stitch pattern changes for the ties, not only does it add visual interest but it makes a nice bow shape that holds its shape well, I think in part due to the purl ridges every several rows. Frankly that bow was a complete pain in the ass to tie. You just tie it like a shoelace but that’s easier said than done. But it’s well worth the fuss as it looks perfect now and will stay tied forever more, so it only had to be annoying once. 😉 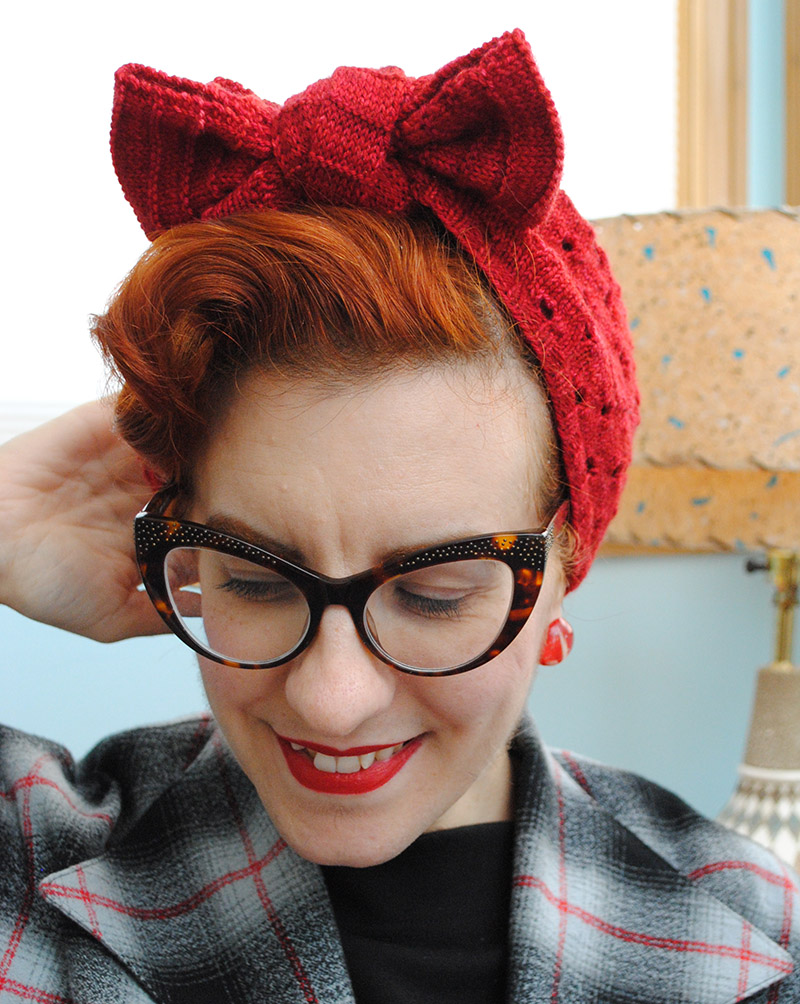 A short story for a small project that I’m very happy with. I suspect aqua, green and maybe a couple of other colors of turbans will eventually need to make an appearance in my winter wardrobe!