Before Mel and I went up to northern Wisconsin for a short vacation earlier this month, I had grand plans for vacation sewing (as you do), but only got a couple of items finished. The first I’m sharing is this flannel topper! 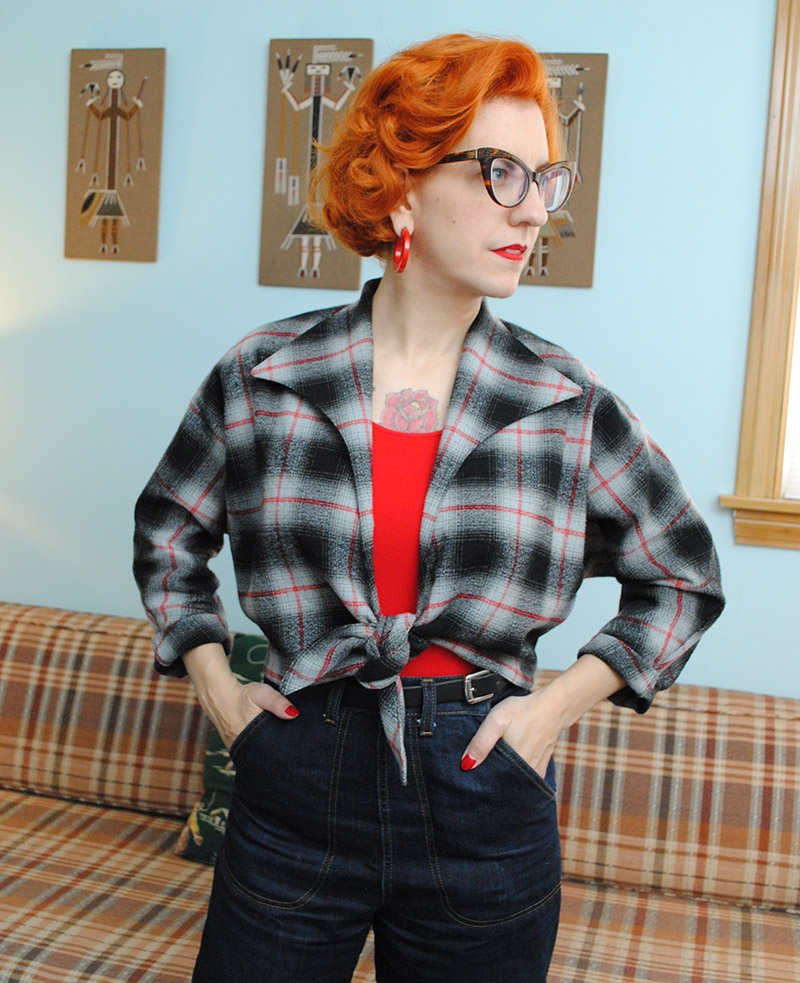 I found this great Simplicity pattern from 1949 at an antique mall for just a couple of dollars! I bought it purely for the tie-front topper. I thought it would be great sewn up in a cozy plaid flannel to wear over solid tees and turtlenecks. Teeechnically this doesn’t fit into my Vintage Pledge this year for sewing up 1950s patterns, but 1949 is pretty close and I’d say this is a very mid-century look, so I’m giving it a pass. 😉 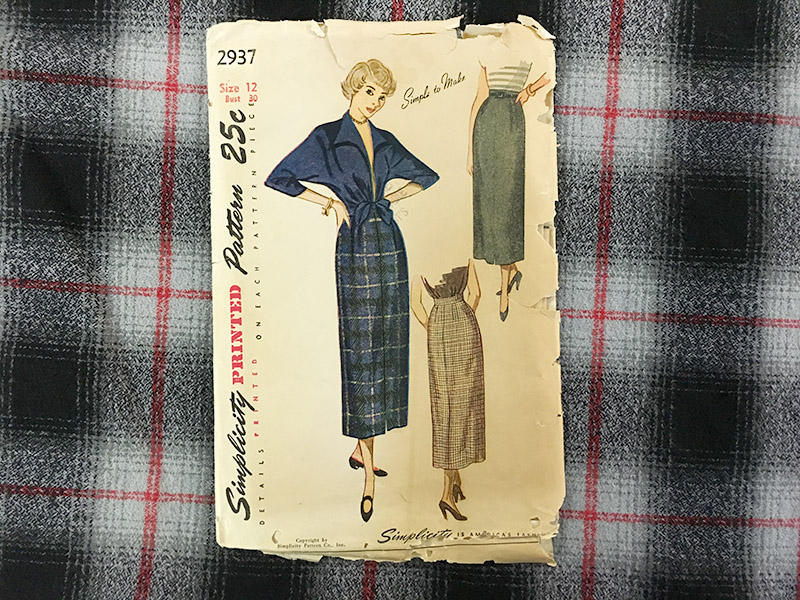 Plaid is one of my absolute all time favorite prints (why else would I have—and regularly wear—so many Pendleton jackets?!). But, I know it’s such a pain to sew, so up until this project… I hadn’t actually sewn with plaid. I know, I know. And the irony is not lost on me that I chose a pattern with a seam running straight down the arm for my first go at plaid matching and placement!

I took a lot of time placing the print on the bodice. It’s not like we’re talking a button-down shirt with a yoke and plackets and pockets and set-in sleeves, but I did still want to get it looking as good as possible! I know you can’t match everything with plaid, it’s just not possible since pieces curve and such, and things like fronts and backs aren’t always shaped the same, which was the case for me. I decided the most important things to do were:

The front is all one piece, so I just moved the piece around until I felt like the lines would fall in nice places on the bodice front: both the vertical and the horizontal lines, the collar, sleeve and the like.

Below, the collar area is at the bottom of the photo, and the part that ties at the waist is at the top. 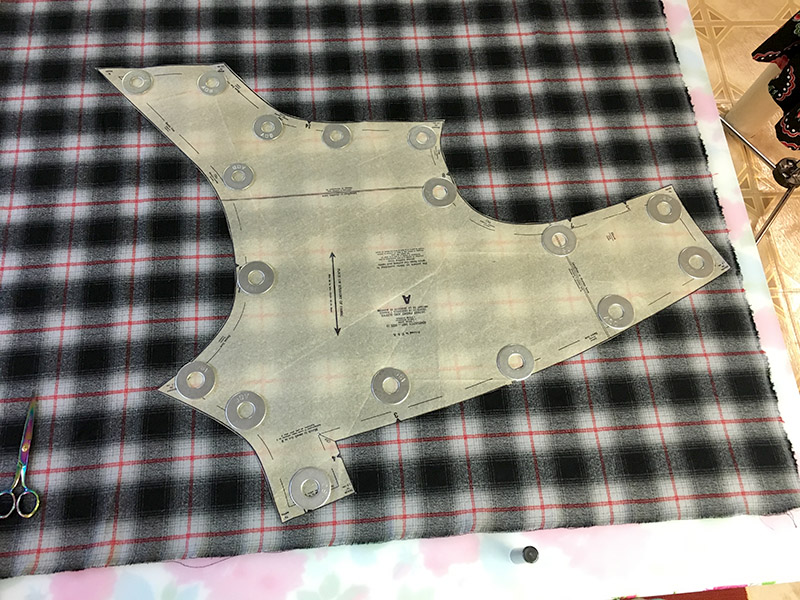 Then of course I had to do the exact same thing with the other front. Slow going and a fabric eater, but it paid off! 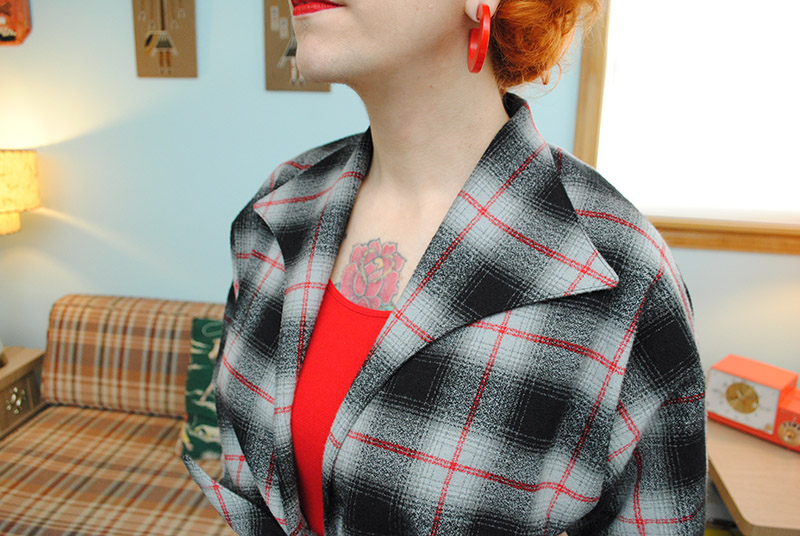 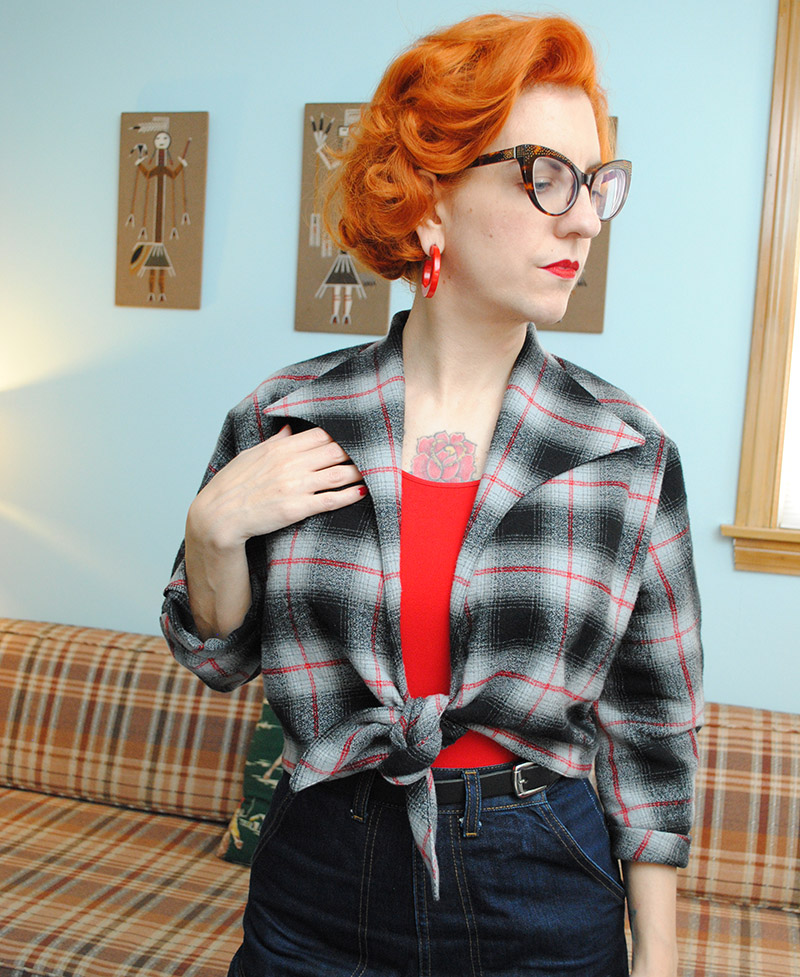 The back involved nice placement of the center back seam (which is actually slightly curved towards the bottom for some reason), as well as trying to get the sleeve/shoulder seam vertical red lines to match up mostly with the front. That was the most difficult part for sure. 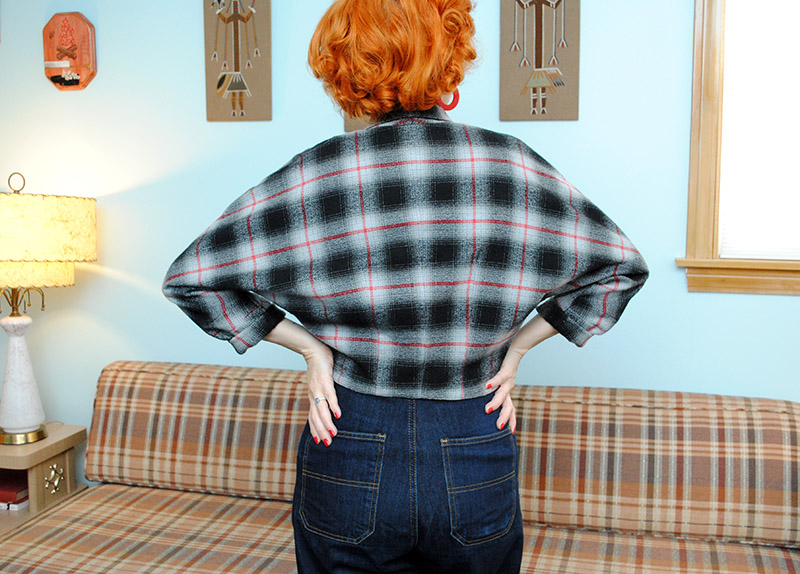 The side seams had to fall into the category of “don’t worry about it” because I couldn’t get the shoulder/arm seam looking good as well as the side seam, so that was the sacrifice. Since you can barely see the side seam because of the dolman sleeves and cropped length anyway, it just made the most sense.

But those sleeves, geez. Cut-on and batwing sleeves are really not meant for plaid! But I was stubborn. There was no way I could match the pattern exactly, but I at least got most of the red lines to intersect from the front and back. I’m definitely pleased with the results. It’s better up towards the shoulder before the seam curves more and less of the gray and black lines match, but I’m happy. 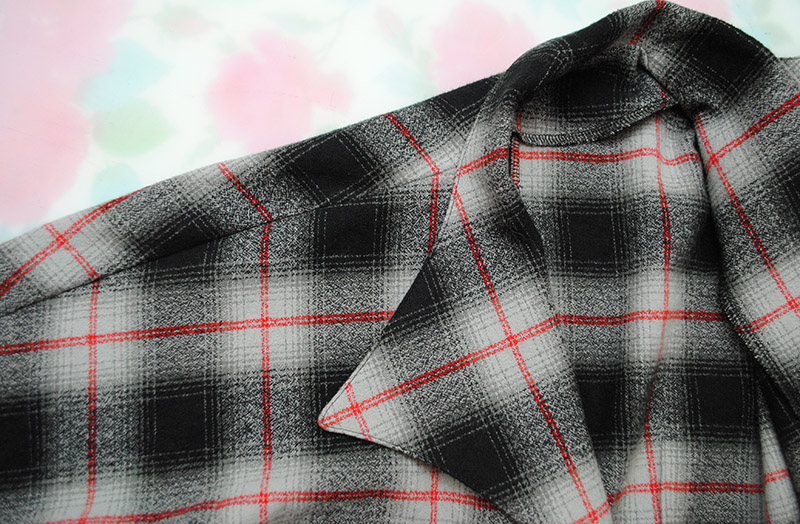 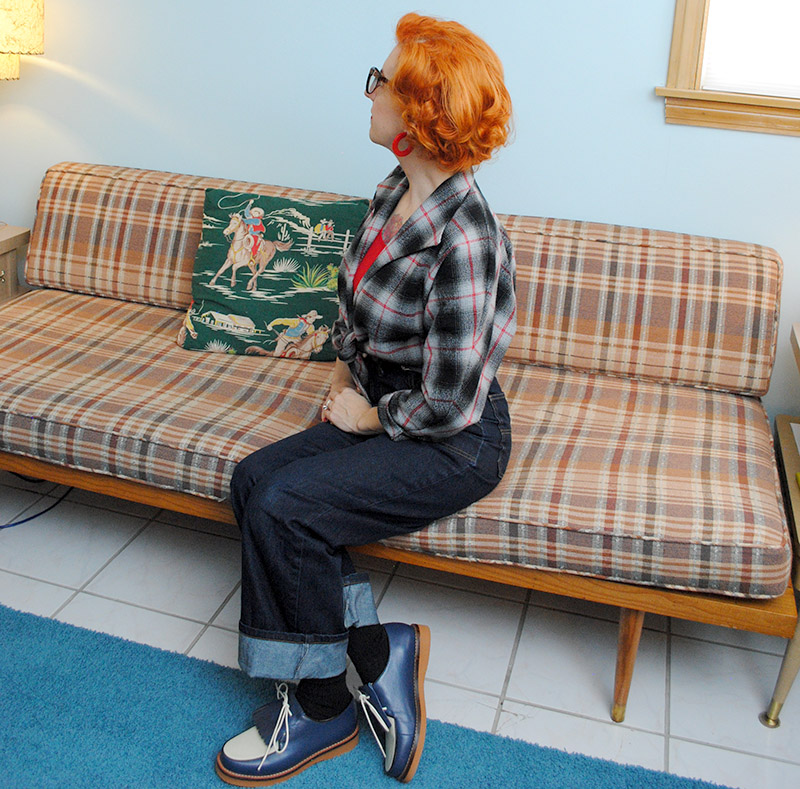 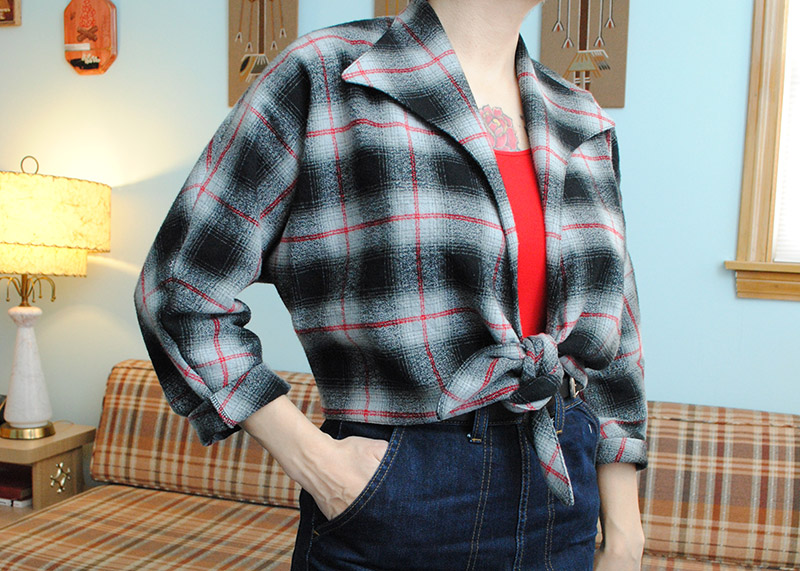 And for sewing geekery, here’s a shot of under the collar, where everything lines up at the center back of the collar and back bodice: 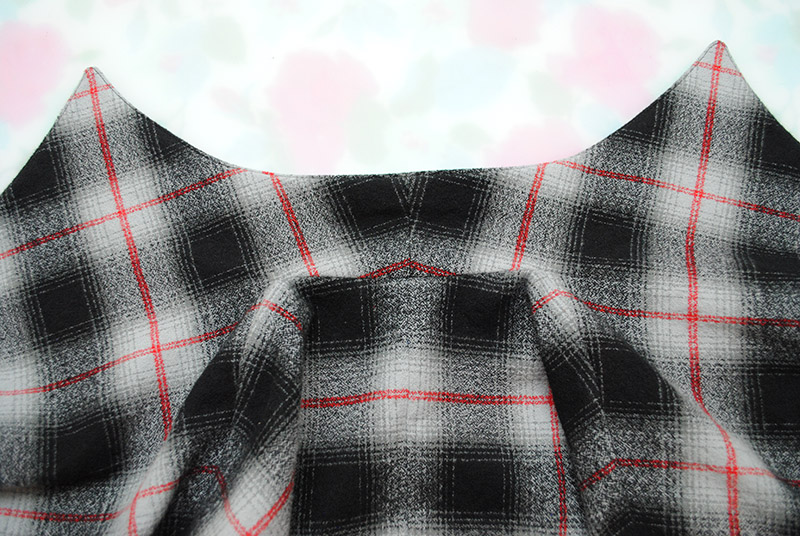 Because this is essentially an unlined jacket, I contemplated binding the seam allowances to look a bit nicer inside, but when I did it on a sample they were too bulky with the flannel (even with the thinnest of binding, using rayon seam tape), so I nixed that idea and serged them instead. This would be a nice lined jacket, but honestly if I need a lightweight jacket to be warm enough to be lined, it also needs to close up properly in the front. So it’s better to use a pattern like this as a ‘topper’ instead. I also opted to edge stitch around the entire topper, which makes all the edges a bit more crisp.

The fabric is one from Robert Kaufman’s mammoth flannel line, and looks a lot like a vintage shadow plaid you’d see on men’s Pendleton shirts. It’s really a cozy fabric, and I liked working with it a lot. Very moldable but seemed to hold its shape well, and soft and thick. I have some more in a different print for a shirt for Mel (yes, I’m going to sew a vintage shirt for Mel! at some point…). I love this line but be forewarned not every photo is accurate, as the one I ordered from Mel looks way less plaid in person as the vertical lines are not as distinct as it looks. (I kind of hate how many online fabric shops don’t take their own photos of fabric and rely on the ones supplied from the manufacturer, so if they’re inaccurate in one place they’re inaccurate in lots of places, but that’s another story.) 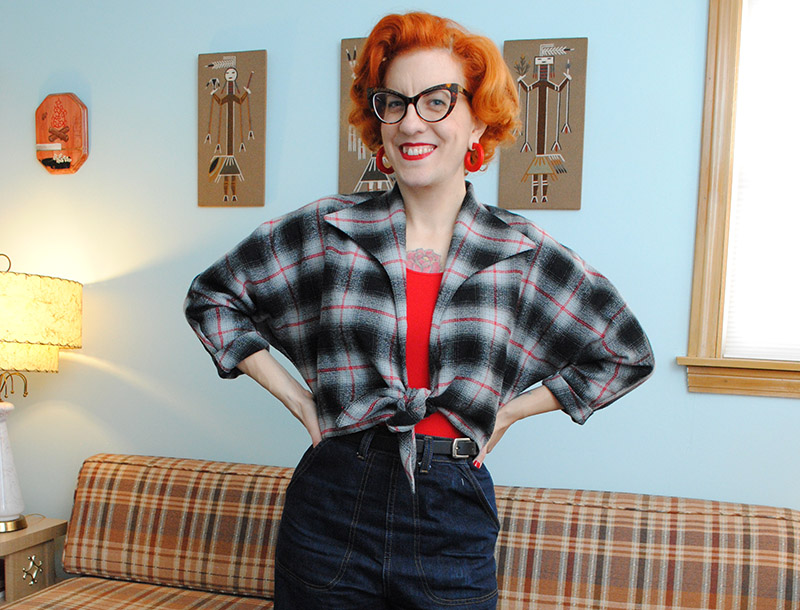 The jury is still out how often I will wear this. I’ve been bored with some of my same combinations of clothing lately, and thus I’m trying to add in new things for the cooler weather. I do blouse-and-cardigan all the time, but I wanted a few other silhouettes in my wardrobe. So this is one thing I’m going to try out, although I don’t envision wanting a slew of them or anything. Currently I don’t have many solid-colored tops (and less that match), so I don’t have much to wear this over yet. But as I work on that, I’ll hopefully get a lot of wear out of this. Because it sure is cute! 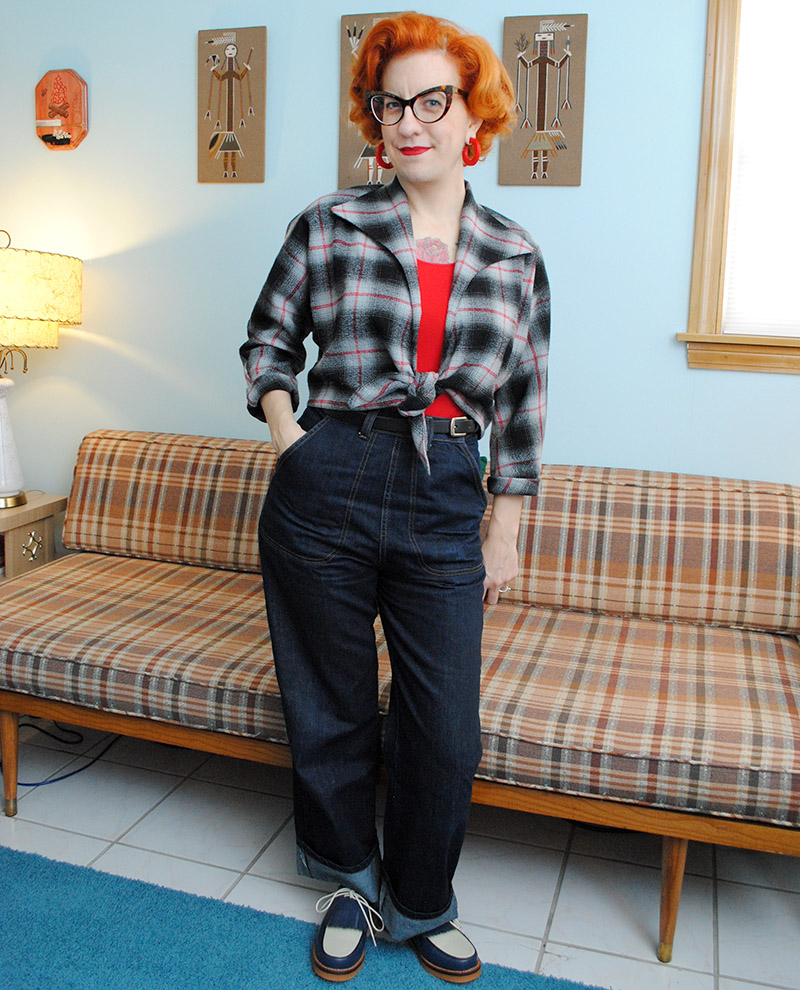