Truth: I blame a lot of my fashion dreaming this early start to the year on Vera Ellen’s wardrobe in White Christmas, from 1954. When watching it over the holidays (a yearly tradition), there were a few things that just spoke to me. I mean everyone’s wardrobe in that movie is amazing, but Vera Ellen’s wrap tops and her turtlenecks (and a turtleneck dress, even)… those fashion basics really grabbed me this time!

She sported at least a couple of turtlenecks in that movie. And since the end of December, I’ve really, really wanted to make one. But I wanted one with a 1950s twist.

And I’d say I nailed it! In black, it definitely would fit into the mid-century stereotype of a beatnik, wouldn’t you agree? (Black, the color also know as “Pet Hair Collector”, lint rollers be damned.)

This is a cut-on sleeve turtleneck that I basically concocted myself, pretty much starting from ground zero and cobbling a few things together along the way. I didn’t have a pattern and couldn’t really seem to find anything suitable, so I just kind of winged it. I mean in a stretch knit, how much could go wrong?? I mean, yeah the obvious answer is plenty, but spoiler: it didn’t. 😉

I know I go on and on about cut-on sleeves and how much I love them, so this is going to be nothing new if you’ve followed my blog for awhile. You see this cut-on style of sleeve all over mid-1950s fashion, and of course that extends to sewing patterns, where I draw a lot of inspiration from. Sometimes it’s called a batwing, sometimes dolman, I think both generally when they’re much deeper armholes leading into wider sleeves at the upper arm. There is just something so quintessentially vintage about that sleeve style, although of course you see it in modern fashion sometimes, too.

But in the 50s, you’d get more than just little ‘cap’ sleeves that were cut-on. Which modern patterns—that aren’t specifically retro designs, that is—are often are limited to. In the 50s you’d also see them in elbow-length, 3/4 length and even long sleeves. Frequently with a seam extending down from the shoulder to the end of the sleeve, in sewing patterns and in vintage ready-to-wear fashions. 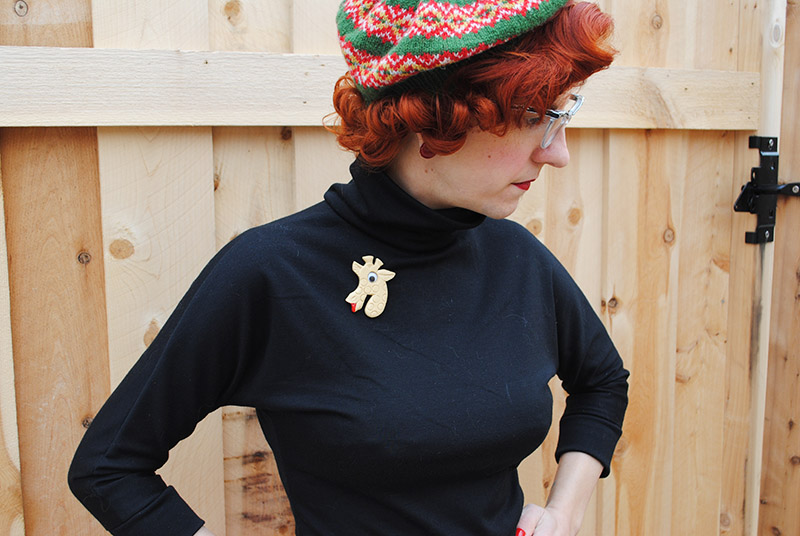 I adore the look and I enjoy the ease of wearing this style of sleeve, and let me tell you, it’s waaaay better in a comfy knit!! I can confirm that with all the wrap/surplice tops I showed you last week, and with this turtleneck, too.

Having seen Vera Ellen in at least two cut-on sleeve turtlenecks in White Christmas, and while I was in the middle of sewing several versions of Butterick B6285, I started thinking of ideas: a cut-on sleeve turtleneck with a wide band at the waist and bands for the sleeve cuffs. And with the turtleneck, that meant a knit project with no hems… I do kind of hate hemming knits, I admit. So for a project I wasn’t even sure would work well, I wanted relatively no-fuss. So bands, no hems.

Technically, I could have constructed it with no shoulder seam going down the shoulder to the cuff, and made the front/back all one piece, but I decided to add in a seam to make a much less annoying pattern piece. Besides, most 1950s patterns in my stash (or that I examined online) for wovens have a seam, and some of them list jersey as appropriate fabrics, and I’ve seen stretch knit cut-on sleeve tops with shoulder/arm seams… so that was all good enough for me!

Probably not a great idea unless your fabric presses well, though. Mine did fine. Although if you wanted to be fancy you could probably press the seam open and do a decorative stitch on top, kind of like the faux flatlock tutorial at Sewaholic. That’s for sportswear but I don’t see why you couldn’t try it for something else. Hey, it’s your sewing! 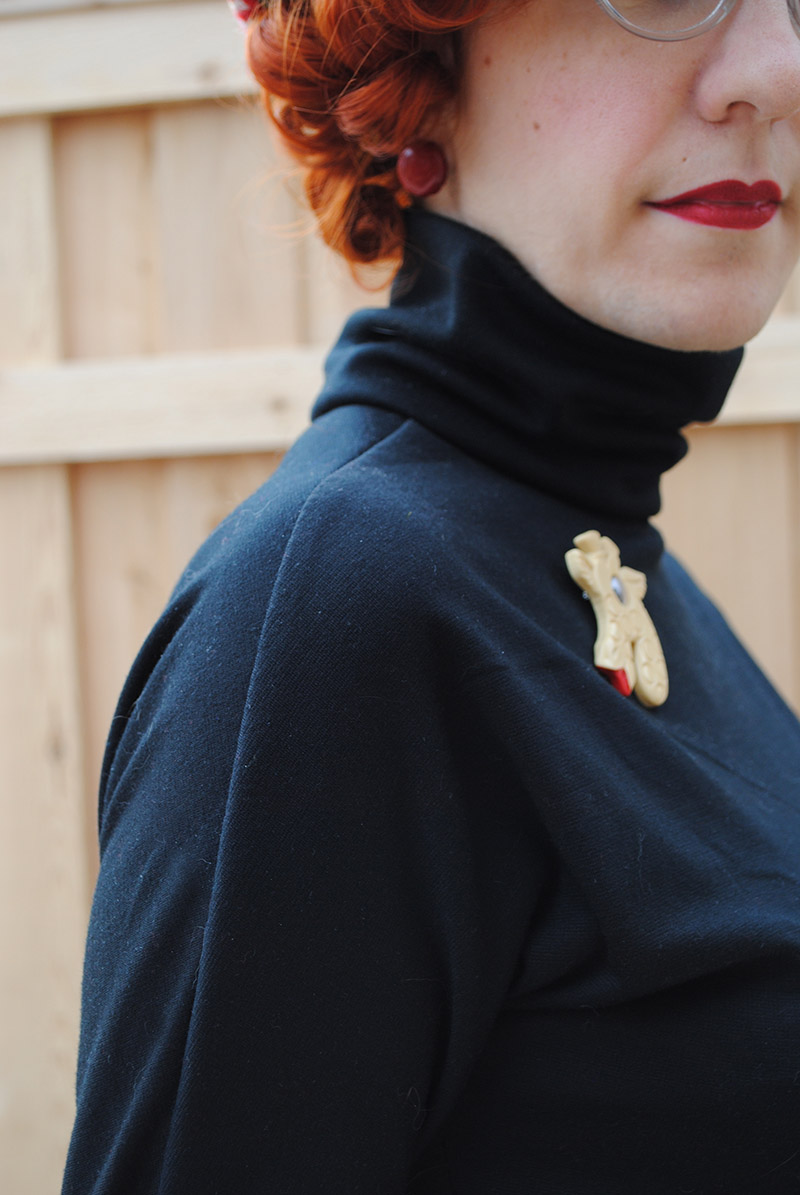 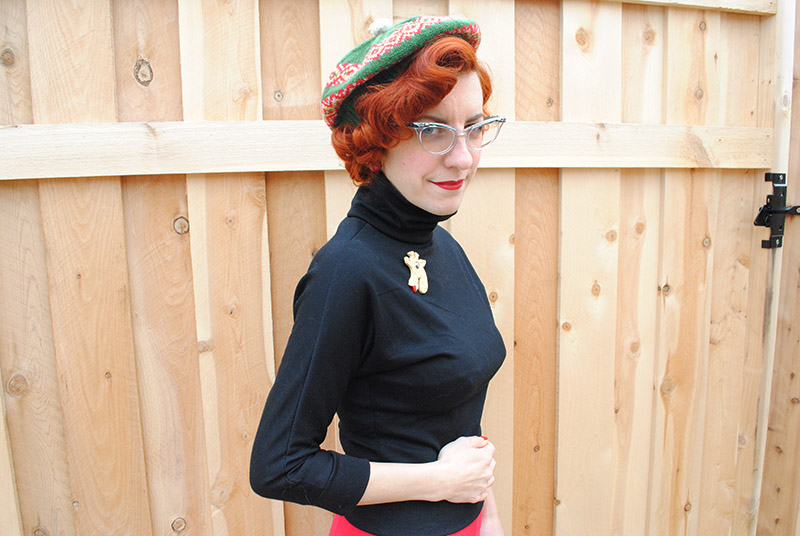 I didn’t bother making the front different from the back: the horror! So there was one bodice piece. The only thing that prevents this from being reversible is that I followed a RTW turtleneck of mine and put the seam of the turtleneck band at the center back neck. Yes, I could have worked out different neckline shaping or shoulder shaping for the front and back, but I didn’t have a turtleneck sewing pattern to work from. And you know what? It’s totally fine. Yay for knits! 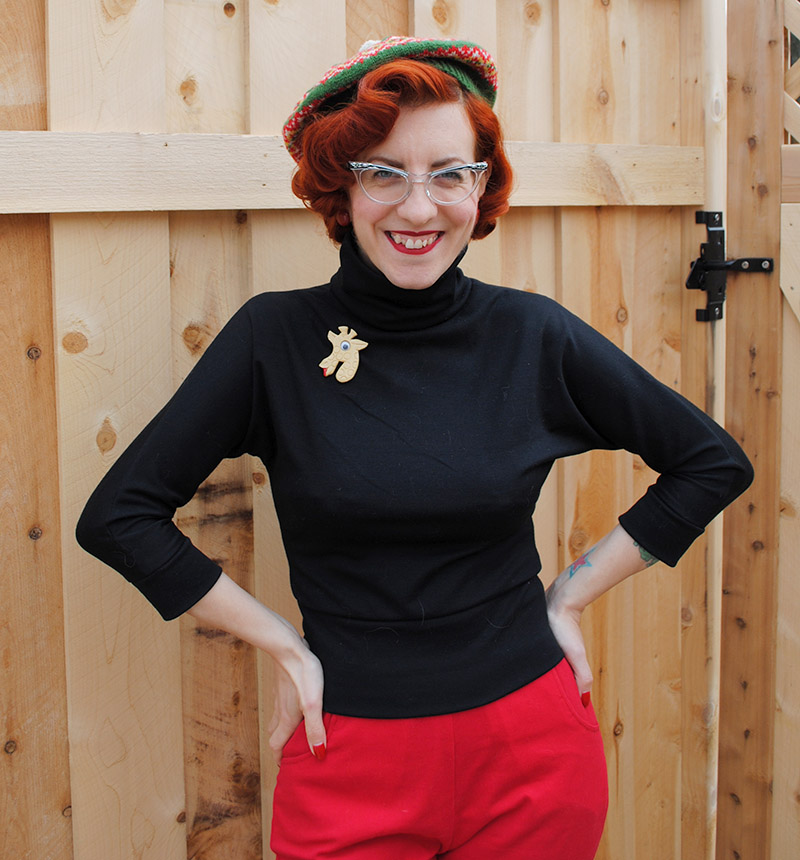 The top did end up quite fitted in the neck and waist bands, due to a poor fabric match up: this was a black knit that wasn’t described as ponte, but I think it is. So the stretch is kind of minimal. Which I knew, but still plodded on because I wanted black, and that’s the only black knit I had. (Listen to your fabric, people.) It fits fine on, but boy it’s a sight pulling my head through the turtleneck! Definitely a “do your hair and makeup after” top. But I love the turtleneck size when I’m wearing it, so I suspect it’ll be much more forgiving in a stretchier fabric. 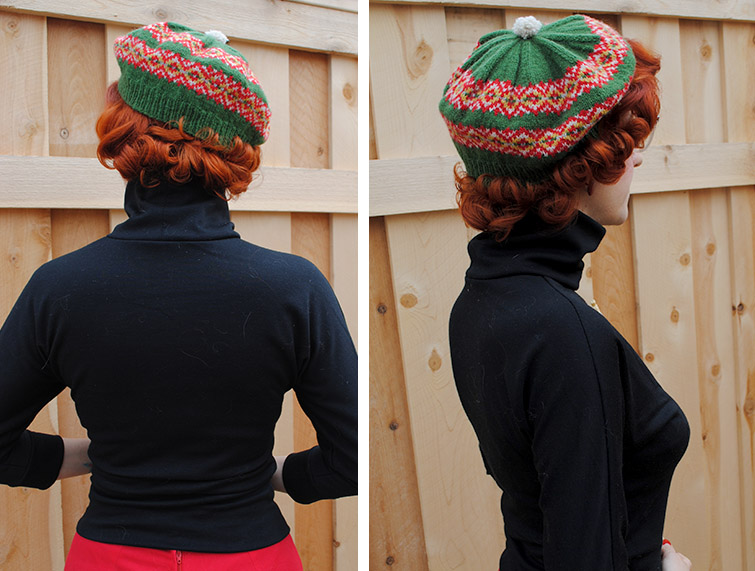 I like the waistband but if I’m honest, I’d find it more wearable without the band. I can tuck it in, and you don’t see too much of the band sticking out, thanks to it being black. But more often I’d probably omit a band and lengthen the body. But I’m glad I tried it at least once.

So how did I cobble this all together?

And that was it! I constructed it all using a zig zag stitch since I wanted the option to unpick if I didn’t like something, and because stretch knits don’t fray, all I did was trim down the seam allowances inside. Next time, I’d likely assemble on my serger.

I realized it came out a bit like a more fitted version of Freddies of Pinewood’s Beatnik top, don’t you think? I love that top, but olive isn’t my thing, so I’m kind of not-so-secretly thrilled that I accidentally made a similar one! 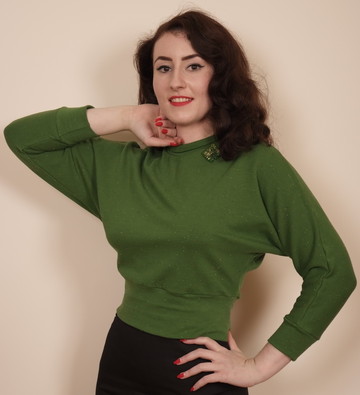 I think I have a fantastic starting point for not only more turtlenecks, but if I omit that turtleneck band and do a narrow one (or fold the hem in), cut-on sleeved tees like the above, too! I have a so-far-unshared personal goal of making this year be a year of getting knit tops in order in my wardrobe, and I think I’m off to a good start!

Anything you’re hoping to conquer this year, in the crafting department? I’m feeling pretty inspired lately, although having that kind of too inspired head jumble of ideas where I’m struggling to work through my plans, like Karen touched on recently. But I hope the inspiration part is going around! 🙂 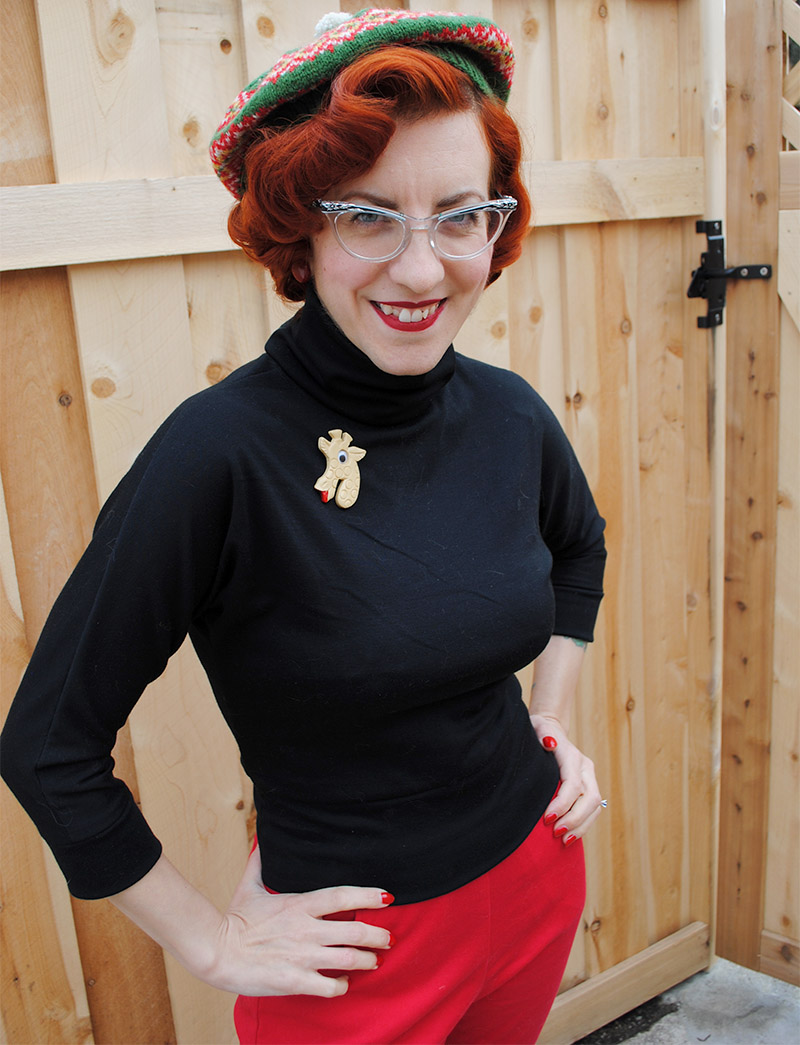