Happy New Year! No sharing of resolutions or reflections here, just marching on with a new year! I think sometimes I enjoy the process of organizing my thoughts in writing more than the commitment, so this year, none of that. I have plenty of ideas of course, but I think for now I’ll just continue to let them steep in my head. So I’ll just chat about them if and when they come up, how about that? 😉

Let’s start off with the second to last dress I sewed in 2015, and the first item I finished in 2016: a rose-print Emery dress and a Vianne cardigan. Cardigan first! 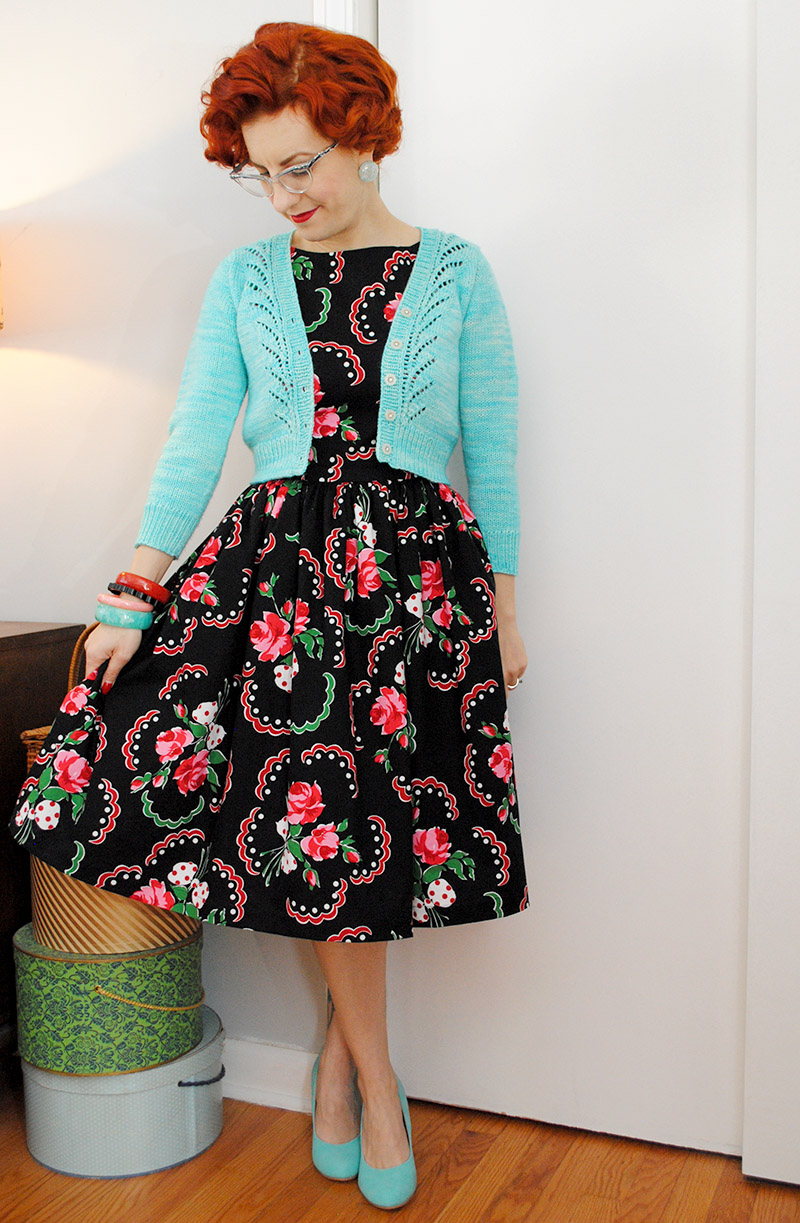 This is the Vianne cardigan by Andi Satterlund (and my Ravelry project page with lots of notes). Late in the fall I started a pullover in robin’s egg blue, but it quickly developed problems and needed to be frogged twice, so I put it in time out and instead knit a robin’s egg blue cardigan. Obviously I was in a color mood! Ironically the yarn was the same colorway (aptly named Robin’s Egg) by the same dyer (Madelinetosh), but a totally different base yarn. This is tosh dk, although I had it in my stash so long it was from when it was still classified tosh worsted. Which means 5+ years it sat around waiting to be used, by my calculations. I’m not sure why as this is one of my favorite colors! I have wanted to knit with less superwash merino lately but that’s a lot of my stash, so I’m still often knitting with it. 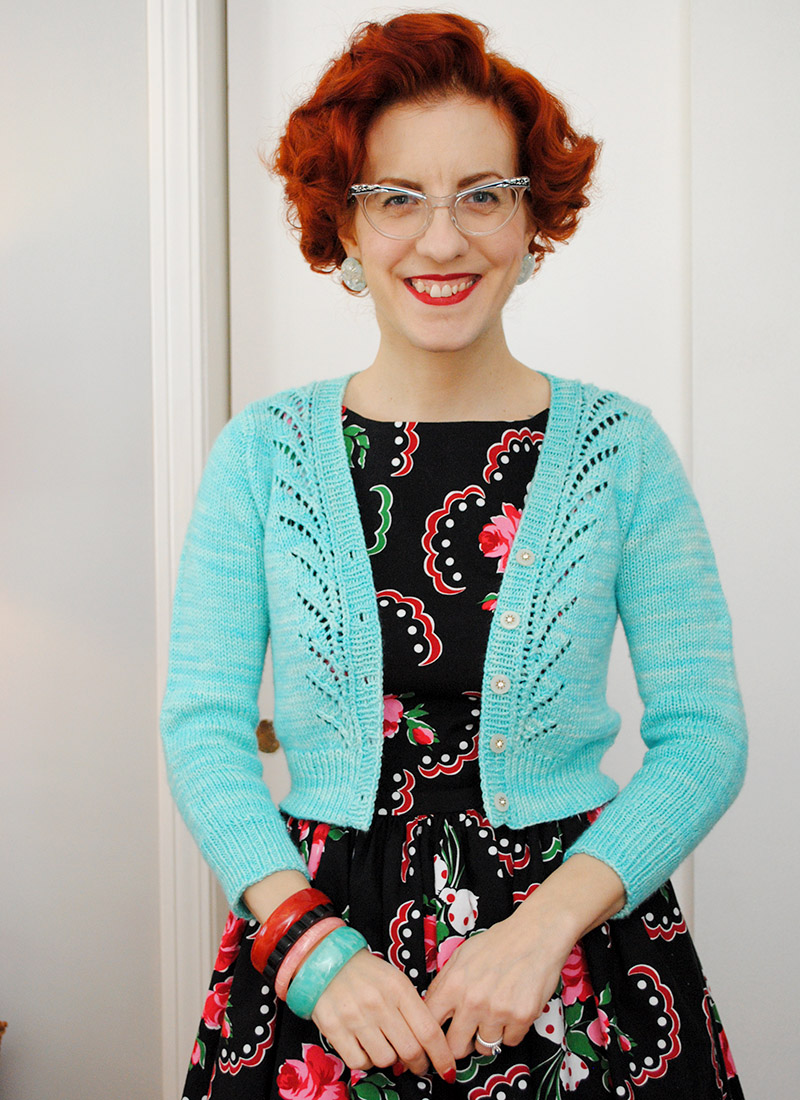 I mainly knit Vianne as written, but I made one major design change, opting to knit the back in plain stockinette instead of the open lace work. 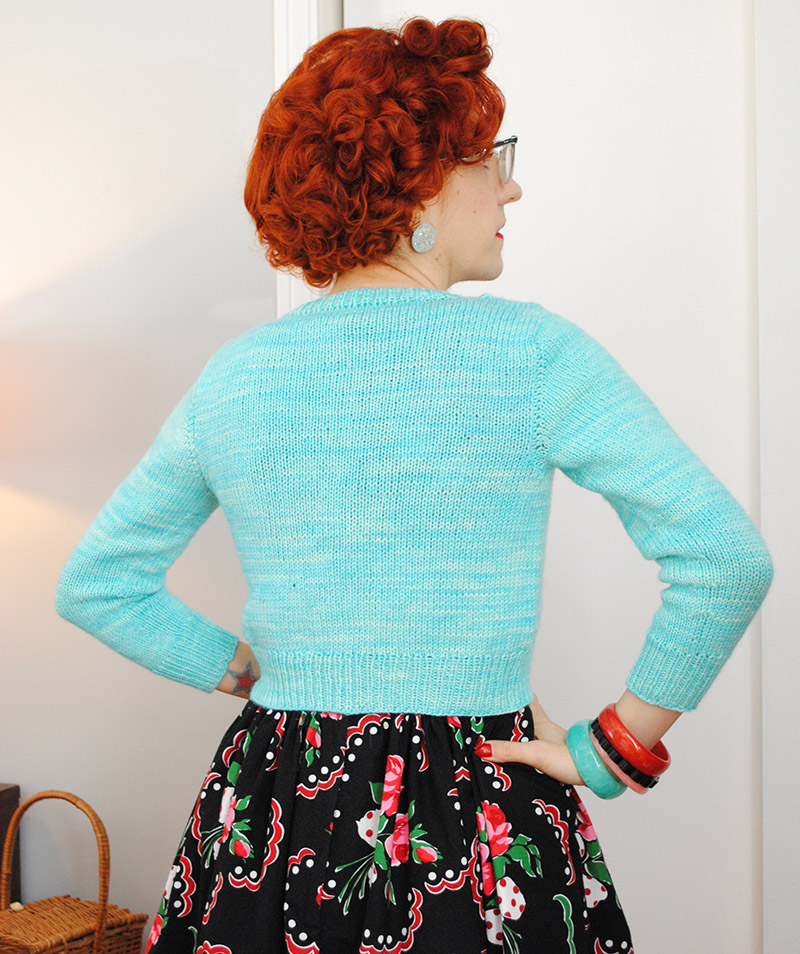 The lace in the design looks pretty but I knew if I ever wanted to wear this in winter when I hide layers under blouses and dresses, lace would not work with everything. To roughly account for the difference in gauge this would mean, I cast on the stitches for one size up for the back only. That all worked out just fine. Oh, I also omitted the waist shaping because I tend to wear cardigans open more than closed, and while I still go back and forth on this, I think on me they hang a little more strange when open when there’s shaping. I also made the sleeves a little longer, about 14″ total, which was just perfect. 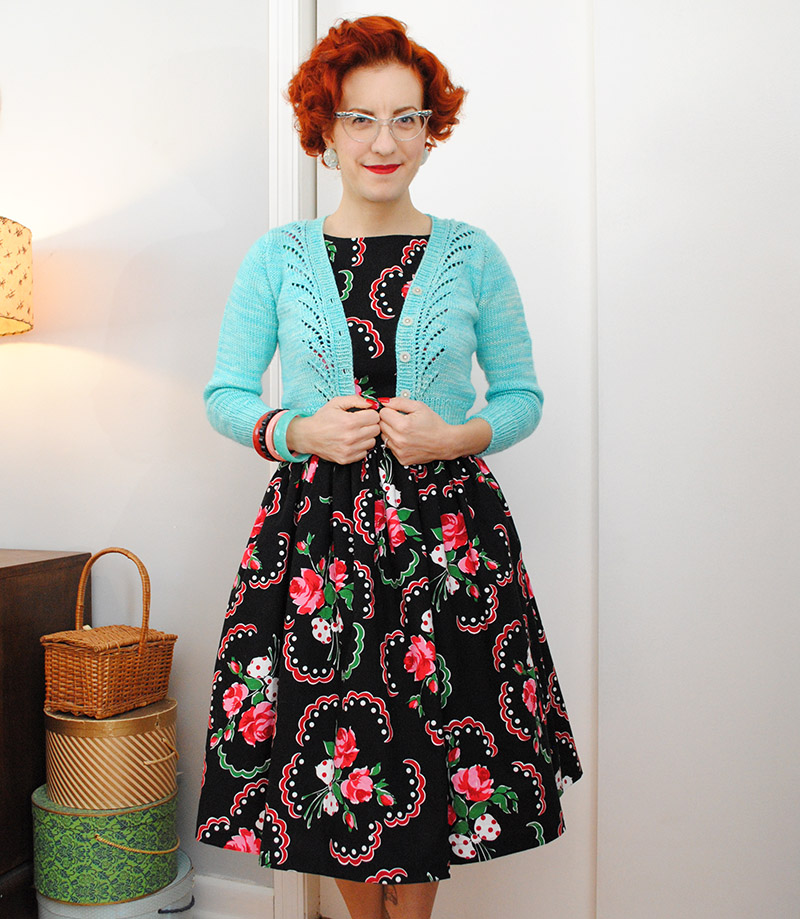 I used vintage buttons from my stash, and they look like little starbursts. I just love them! 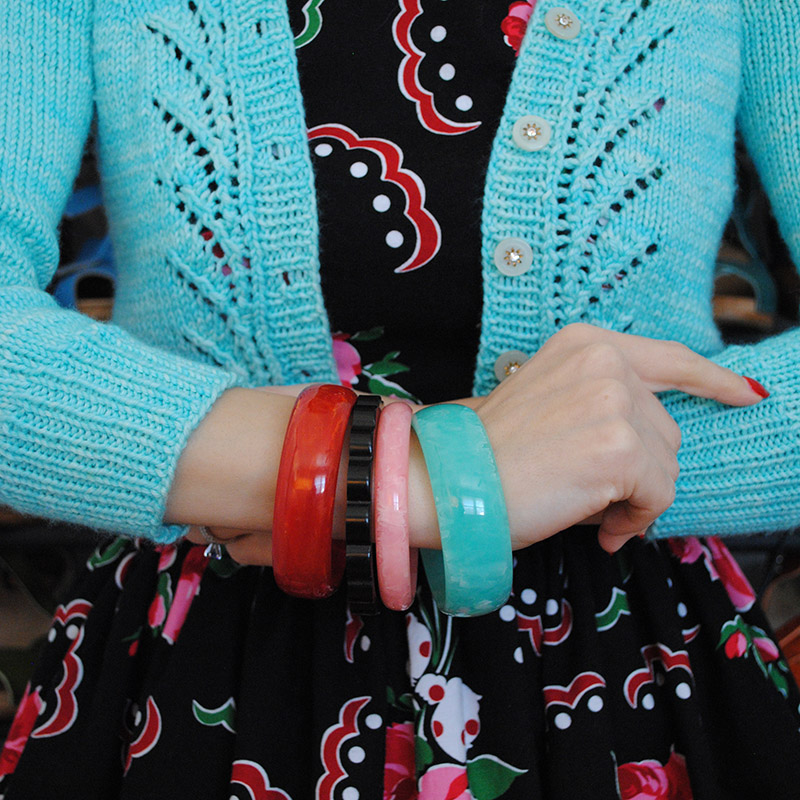 I’m happy with the length, which is 9″ from the bottom of the armhole to the cast off on the ribbing, but I’m a bit Goldilocks about sweater lengths, I’m afraid. This is about ideal for dresses (maybe even a smidge more), so I’d like more cardigans this length, but another 1 – 2″ is better for trousers, and I wear both. Plus, I seem to keep wanting to pull this one into position in the front, unlike another of the same length, so I don’t know. I can never seem to make my mind up about sweater length, and I actually think it’s one of the reasons I discovered at the end of last year I’d knit way, way less than I thought I did or could have. I spent far more time worrying about it!

As for the dress, this is a sleeveless Emery dress, with a full gathered skirt. The fabric is a Michael Miller print called Francie and I absolutely love it! There’s a slightly similar print called Lucy (bigger polka dots) and I’m tempted to sew a dress out of that one, I love this so much. Both also exist on a seafoam green background which I’d really like in warmer months, too! 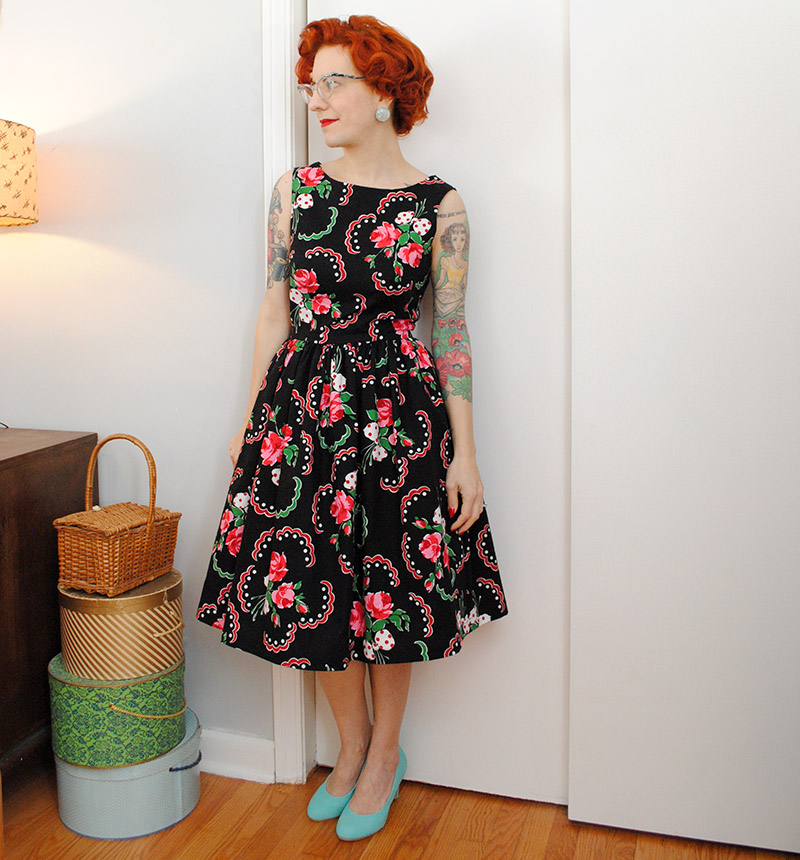 This dress was an interesting reminder that bodies change, but so do preferences, style, and probably a whole bunch of other things that go into making a dress feel like it’s “right”. It might work one time and not quite another. I went back to the basics with this bodice, going back to set-in armholes again so that I could make a sleeveless dress, but keeping some of the modifications I’d made to the bodice over time, including lowering bust darts and lengthening the bodice. In the process, I discovered that I no longer wanted the bodice nearly as long as I’d lengthened it in the past! Body? Personal preference? Who knows, but it’s true!

And the neckline was gaping a bit front and back, I think partially exacerbated by the too-long bodice which I suspect causes everything to ride northward a bit and makes me feel like the upper half of the bodice is too baggy. I also think partially because there aren’t sleeves to shift things into place, if that makes sense. Plus it’s not a bodice that’s meant to be sleeveless, so the armholes need some work, although other than raising them, I’m not quite sure. Baby steps though, it’s a great starting point nonetheless! And it still fits way better than many RTW dresses! 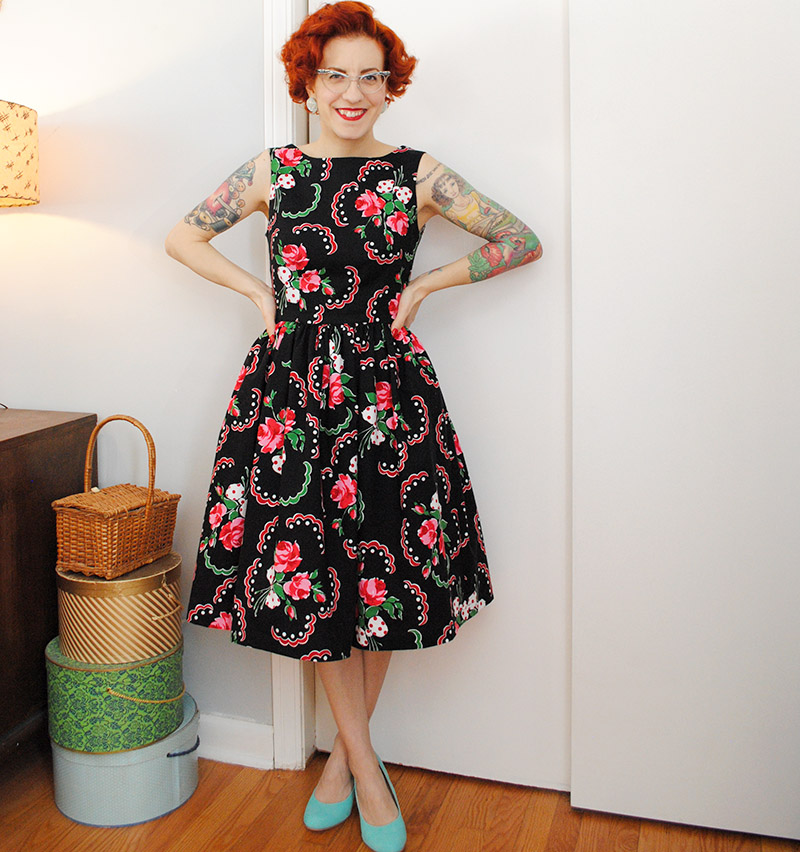 I may try a narrow shoulder adjustment on this for the future, but it’s almost like I just want to move everything in towards the center a bit. In my snow globes Christmas dress I built on the same bodice, and fixed the back gaping (just taking a bigger shoulder dart) and shortened the bodice a bit, and I liked that fit better (although hard to make a strict comparison due to drastically different armholes/sleeves).

As soon as I was finished with this dress, in spite of the few fitting issues that are a puzzlement, I loved it, and I plan to wear the hell out of it. I’m mad for the print, and I love that it’s on a dark background (although pet hair loves that, too). It hung outside my closet for a couple weeks as I usually do with dresses I finish but haven’t blogged about yet, and half the time I went into my closet during that time, I was looking for dark background dresses, which I realized I had very little of, and the couple I did have I was sick of. So, something to work towards in the future! 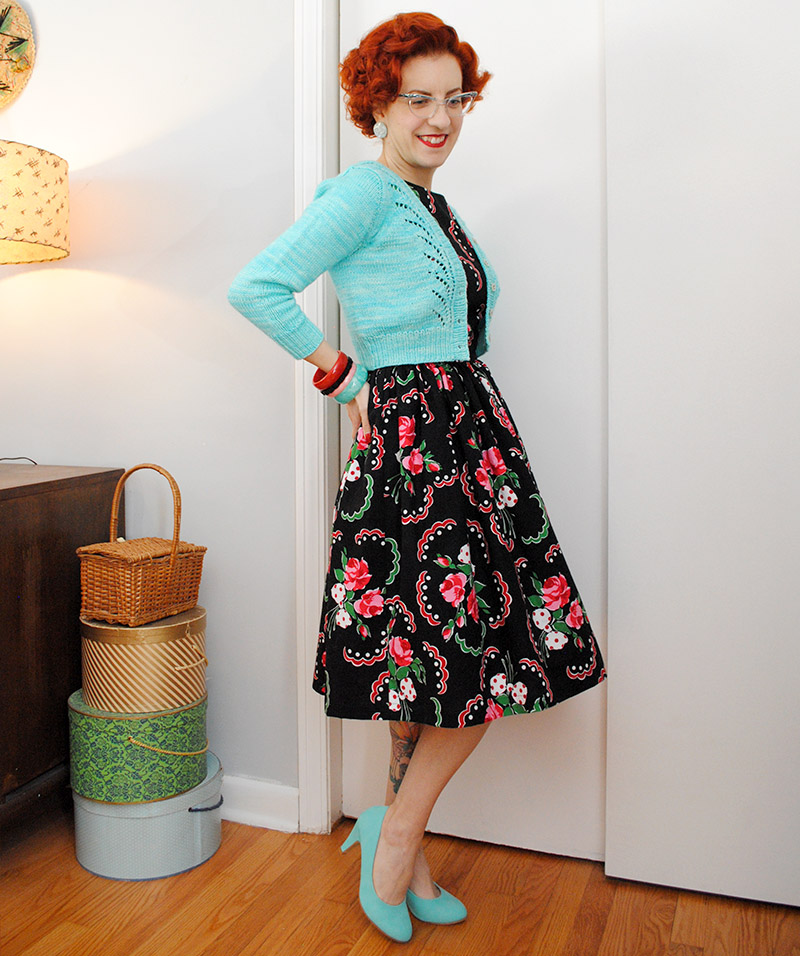 By the way, lest you be fooled by these photos, it’s January and I didn’t leave the house like this! Several hours later for a dinner sushi date with Mel, I added a white turtleneck underneath (I’d normally go for a hidden layer but I was really cold), black leggings, black boots and wool socks. And bracelets omitted so I could fit gloves on. 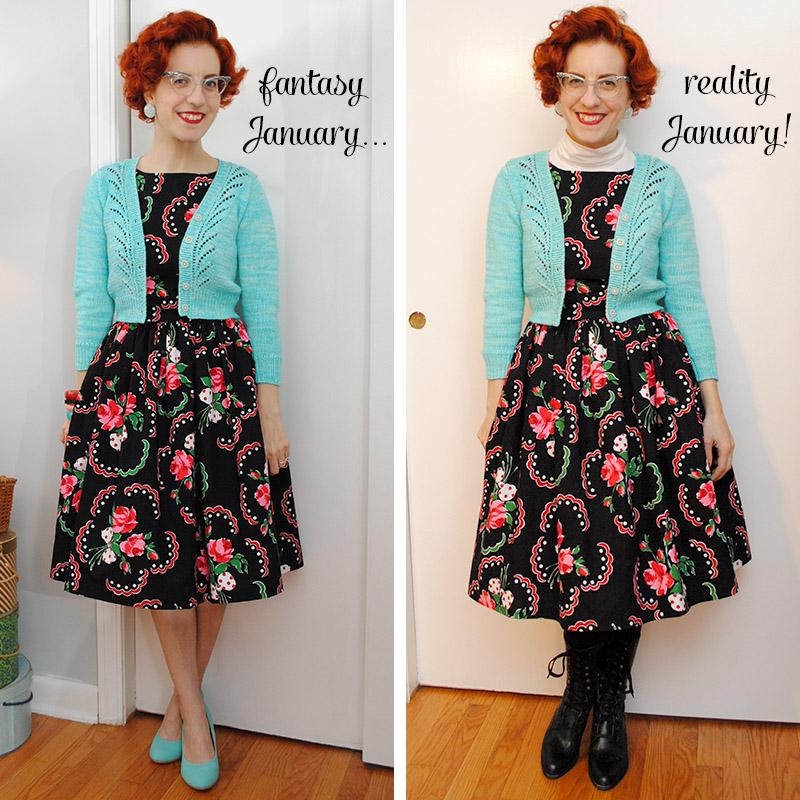 I know I promised myself to sew warmer clothes but eh, this is apparently what I’m in the mood for right now. Hey, it works and I’m happy, so it can’t be a bad way to start off a new year! 😉 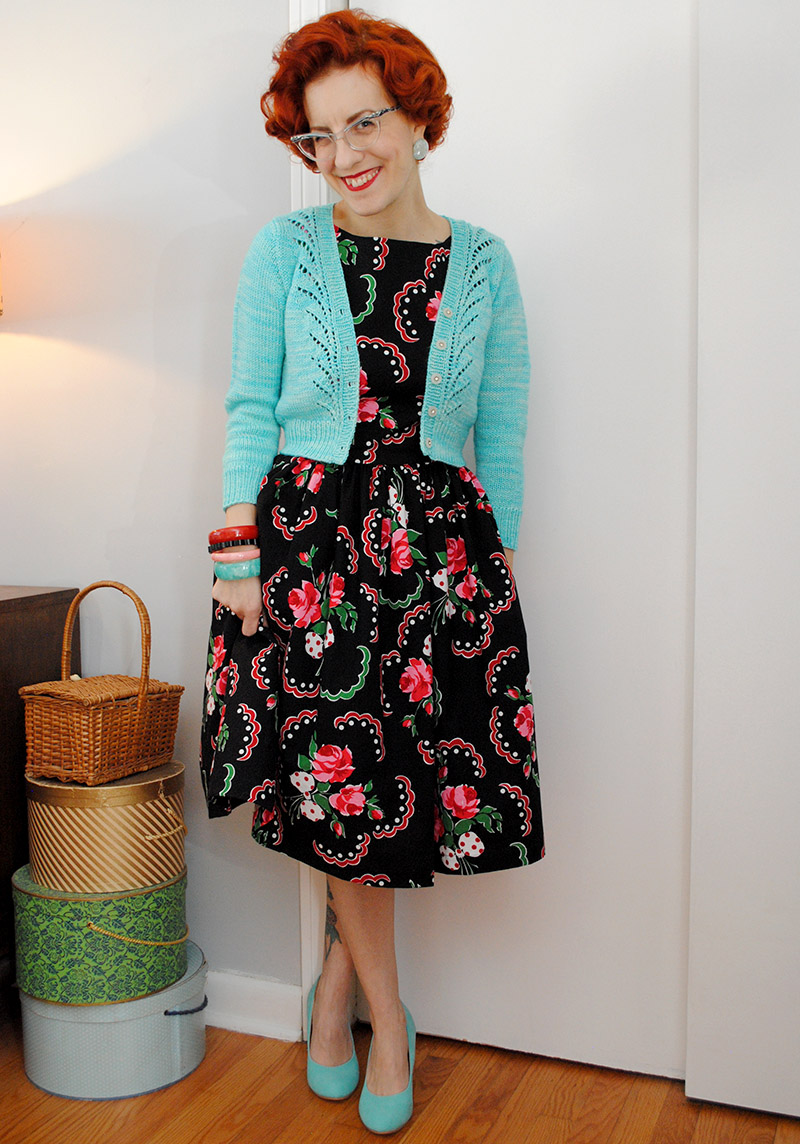