Actually, this post title should be Nancy Drew and the Clue in the Wrap Dress and Cardigan, but that’s a bit of a mouthful, don’t you think? 😉

This post is brought to you by a dress I finished 8 months ago and a cardigan I finished at least a month ago, to put together an outfit over a year in the making! 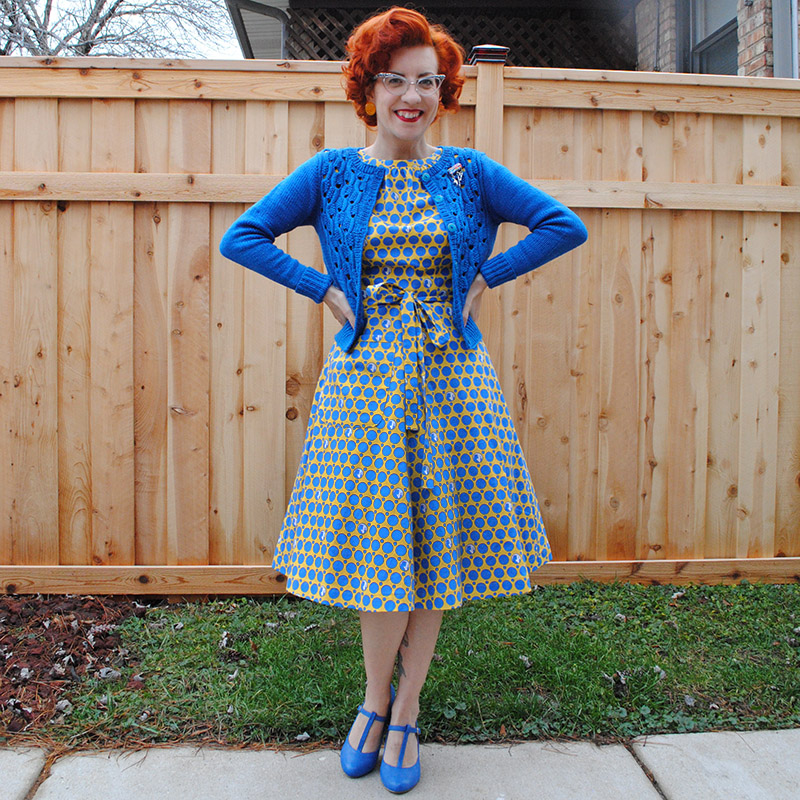 (By the way, I’m still super loving my new haircut! Lots of outfit photos with it have made it to Instagram even while I’ve been bad at blogging!)

I do love this dress but it’s far from perfect. I also have a thing where I sometimes won’t wear an item until I blog about it… and in this case I kept forgetting I’d even made this, because I was a little bit mad at it after finishing and then put it away in the closet, and basically forgot about it. So in the back of my head all autumn I knew I’d made another vintage pledge challenge item, but just couldn’t remember what.

The other day it dawned on me: my Nancy Drew-themed wrap dress. That was the missing item! How could I forget?!! I was so, so excited when I bought this fabric as I LOVE Nancy Drew! It’s from a collection that Moda did that sold out about two years ago. 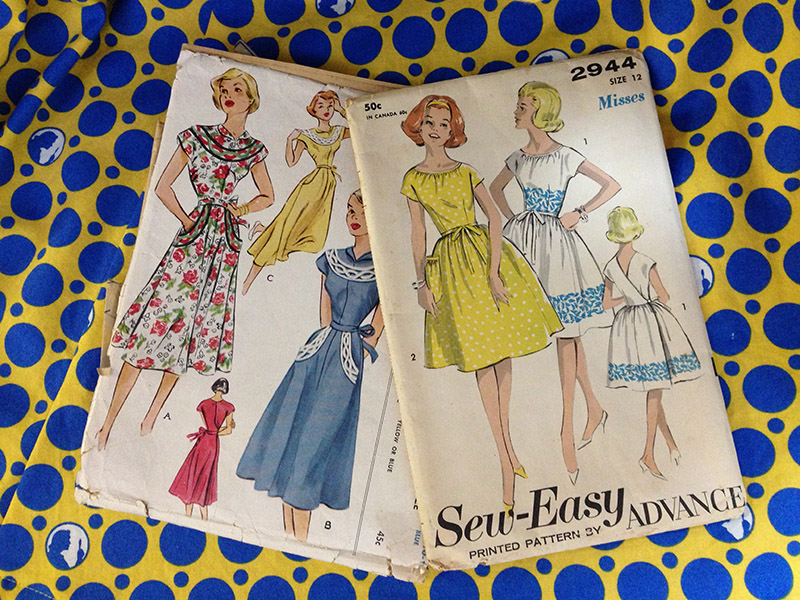 I used Advance 2944, a wrap dress pattern from 1963. For some reason that’s lost to the fact that I made this in May, I decided to use the sweeping gored skirt from McCall 1596, a wrap dress pattern from 1951. The whole thing took a massive 4 1/2 yards of fabric and it’s not even a circle skirt! Okay, I did have a misstep and accidentally cut one skirt piece upside down so I wasted a bit, but this project was definitely a yardage hog. And since lately I’m really loving big full skirts, I might need to get used to that. 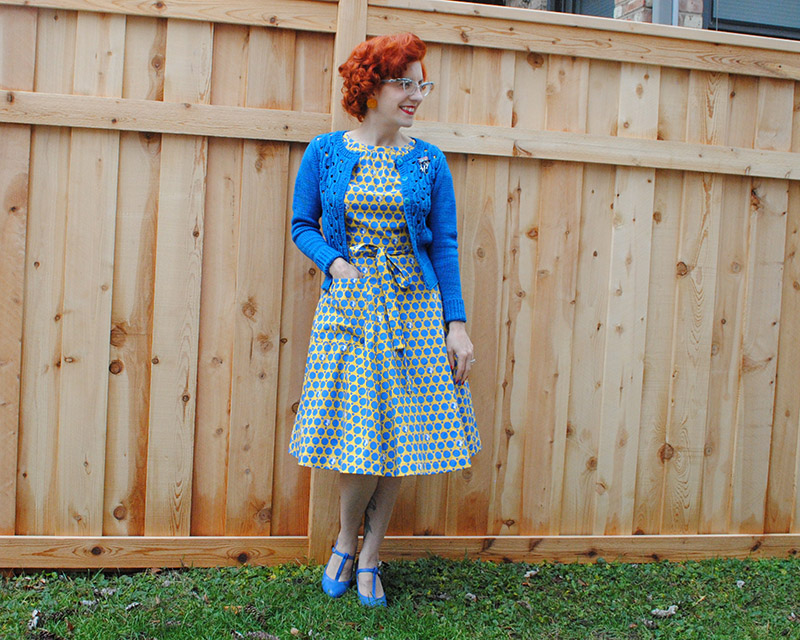 To get the bodice and the skirt to line up, I took an extra 1″ in the center front darts, but otherwise constructed the dress pretty much as written. The front neckline is a bit odd as you sew on a neck stay and then bias binding. The way it has you do it means you see the stitching on the neck stay on the inside, and it all felt a bit excessive for a simple cotton day dress, so I’d probably change that up next time.

I also did the cute patch pocket (gathered at the top) which gets kind of lost in the print and by the time I realized I didn’t get a close up, it was raining. (Raining, in December, and I’m standing outside and wasn’t entirely dying of frostbite or anything! Nuts.) 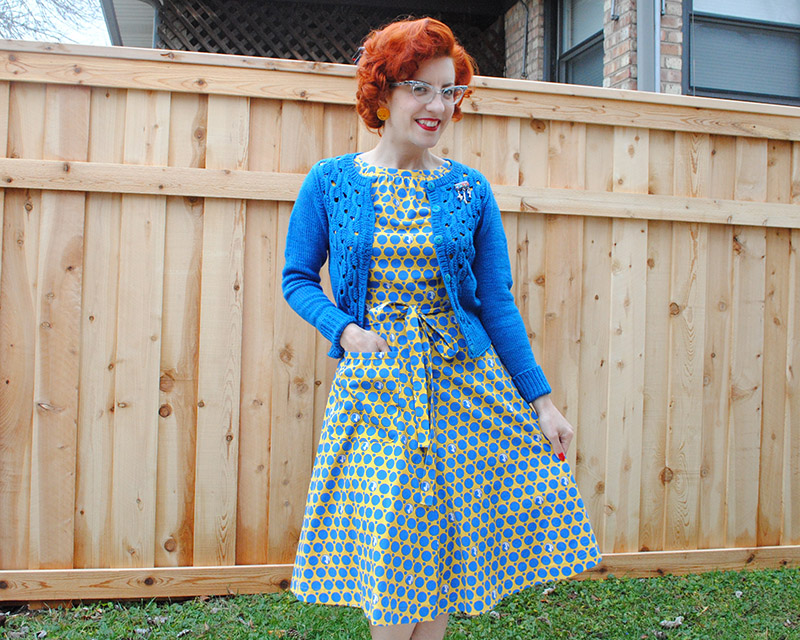 There’s some issues with this dress, some of which could have been worked out if I’d done a muslin but let’s face it, this project took nearly 4 1/2 yards of fabric and I just didn’t feel like doing a full (or even partial) muslin. For one, the bust darts come up a bit higher than the apex of my bust, which an easy fix next time. But hey, closeup of the amazing polka-dot-with-hidden-Nancy-Drews print!! 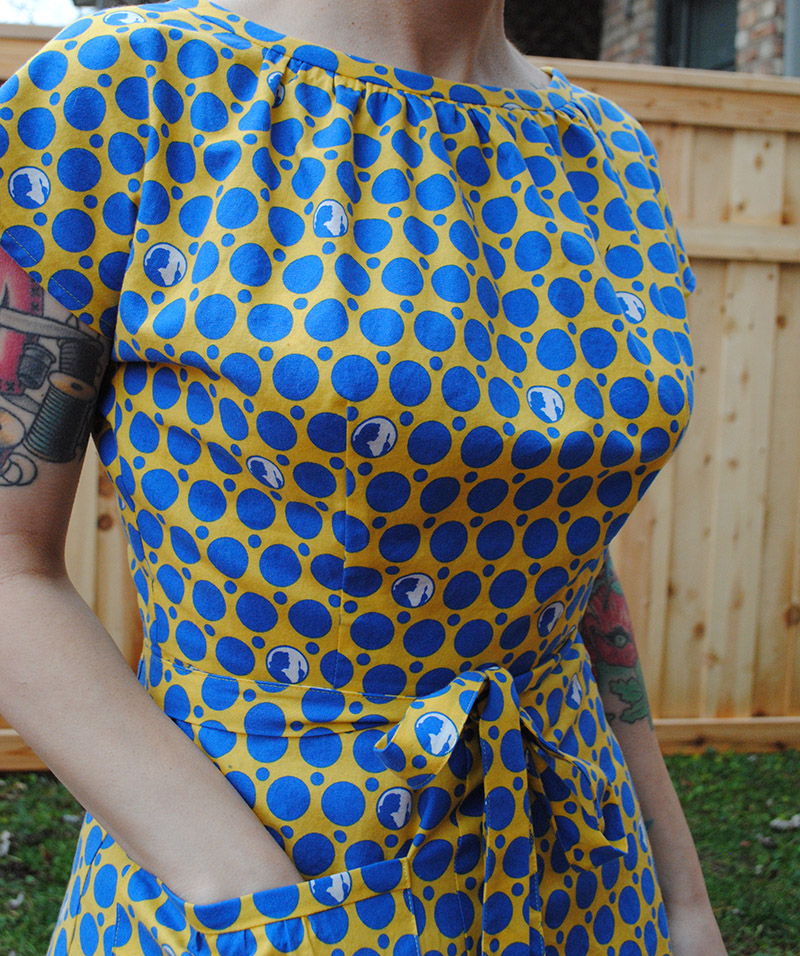 Not so easy fix is the back. Originally when I tried this on, the back gaping was bad. Bad bad. Like big ol’ folds of fabric. The fabric had to go somewhere, so I had Mel help me pinch out what I could (really hard when the other person doesn’t sew!), and the result was a 2 1/4″ wide diagonal dart across the upper back. And frustratingly that didn’t even resolve all of the back issues, as you can see, as there’s still a kind of horizontal-ish fold below the underarms. I think the neckline might be too wide in the front, causing it to slide down on my shoulders a bit in the back, but that’s not where anything ‘wants’ to sit on me and have it look right in the front too, if that makes sense. At least I do really like the v shape in the back. 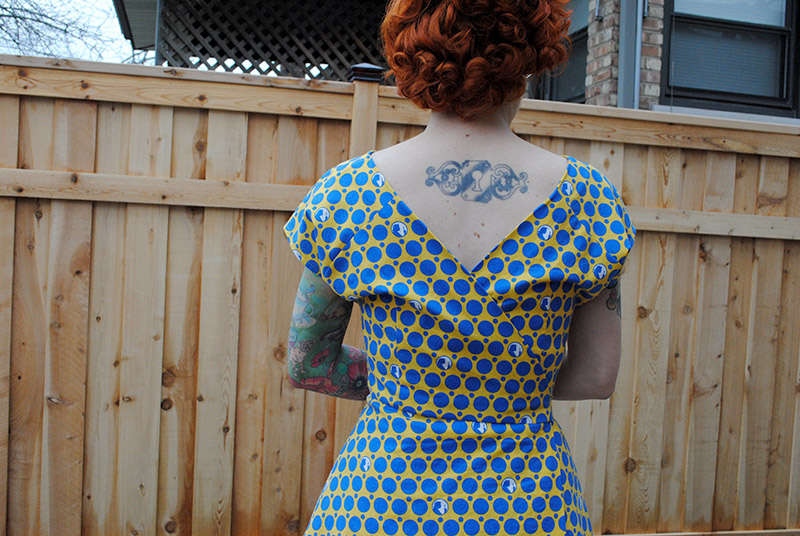 There’s some ways I can actually stand and have the back not look nearly as weird, as the evidence below shows, where you can also see the left side is higher up on my shoulder, which is why I think that might be related. 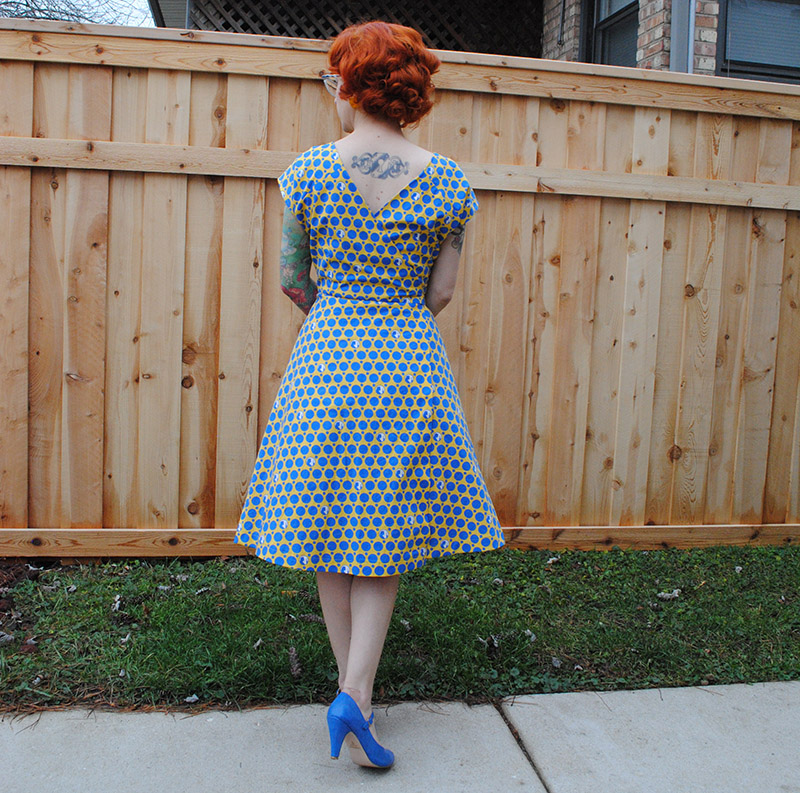 I know it can be part of the deal with wrap dresses… business in the front, WTF in the back. I recall being so pissed off about the back that I apparently needed 8 months to forget about it, because by the time I pulled this out to finally blog about it, I quite liked it again and figured what the hell, I can’t see the back, anyway. 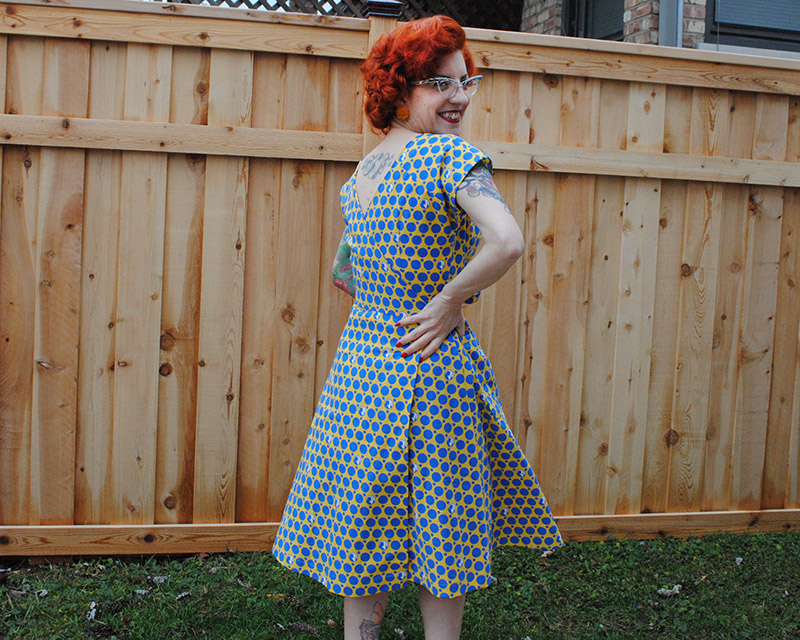 But honestly, I think the shape of this dress is great and I’d love to sometime work on the back issues. Since it’s a cut-on sleeve, I feel like maybe I could rotate out the dart I took in the fabric and also try to pin out the extra folds I’m getting around the armhole level and rotate that out, too. I’m not sure, the upper body shape perplexes me a bit. Maybe someday!

So moving right along to the cardigan! I loved the print of this fabric when I bought it way back in March 2013—intending all the time to make a wrap dress—that I think it subliminally influenced my decision to knit this perfectly matching blue cardigan 10 months later. If you follow the math, you’ll realize that means I started the cardigan in January 2014. I knit on it a bunch, then put it away for more than a year.

In the intervening time I changed my opinion on how long I wanted to knit it, then changed it back after it was too late, and the result is a cardigan that’s actually about 2-3″ longer than I really wish it were. But I’m really just glad to have it off the needles. It’s another sweater in Wollmeise dk from my stash, what can I say, I just love this yarn a lot (and have also been trying not to buy new yarn unless I’m specifically going to knit it right this second, which I’m currently doing with a pair of black gloves). 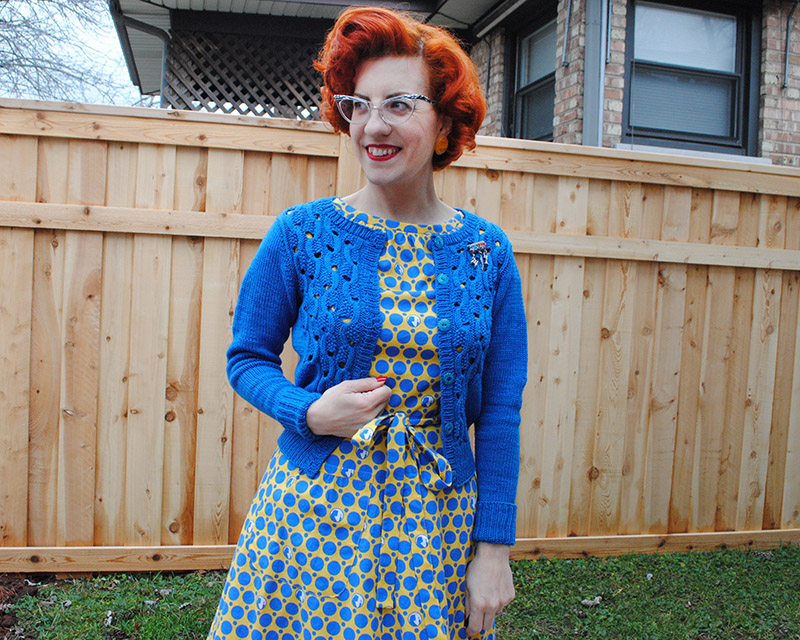 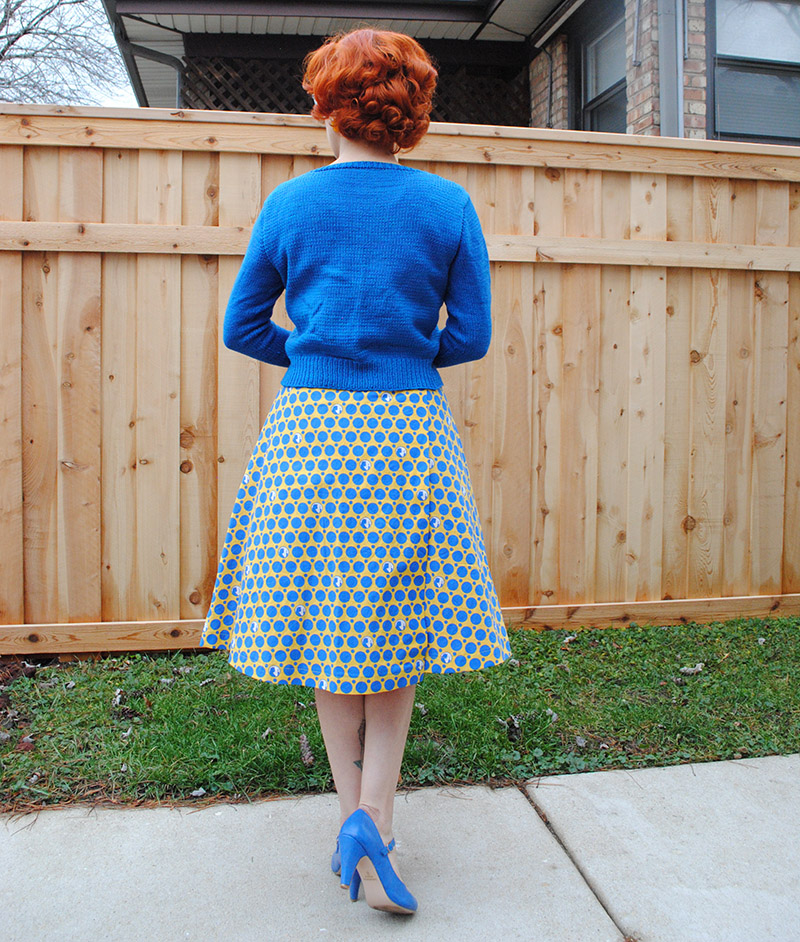 The pattern is Effevescence by Olga Buraya-Kefelian (Ravelry link). I made a bunch of changes, most of which I don’t even really recall, it’s been so long. I know I shortened it, added waist shaping (I’m hot/cold about waist shaping and after this I’m currently cold again), made the armhole depth a bit longer (6″ is too constricting on me, 7-7.5″ is best), made the neckline less wide, and figured out that I’d have enough stitches at the shoulder to fit one more pattern repeat.

I like the finished cardigan but I’m not in love with it, if I’m honest. Even though I loved the hole-y stitch pattern obviously enough to knit it, once I tried the finished cardigan on, I felt like I was wearing a cardigan made out of blue Swiss cheese. That combined with accidentally knitting the sleeves too long (not a big deal, I just folded up the cuffs), and the too long body, means it’s a very pretty cardigan but I’m just not gaga over it for some reason. That might be part to due with it being a project I started so long ago, and then by the time I finished it I just wanted to stop ever thinking about it or looking at it. Because really, there’s nothing wrong with it, obviously! 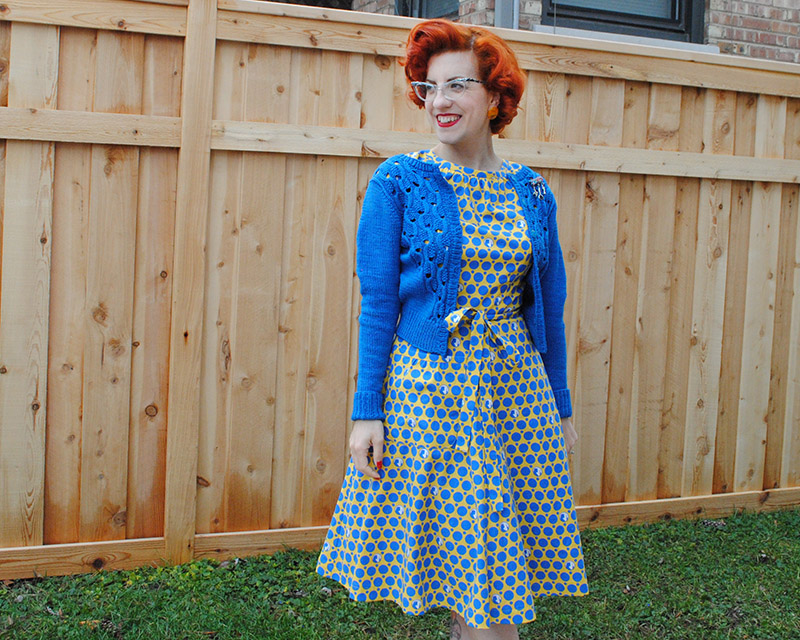 So, it’s a lovely cardigan and I’ll wear it, but it’s not one of my favorites. But hey, makes a smashing top to my Nancy Drew dress, and I do love that! I feel like Nancy (or maybe Bess) would approve of my matchy matchy outfit! And now that I’ve re-remembered this dress, I suspect I’ll be wearing it plenty, back issues or not. 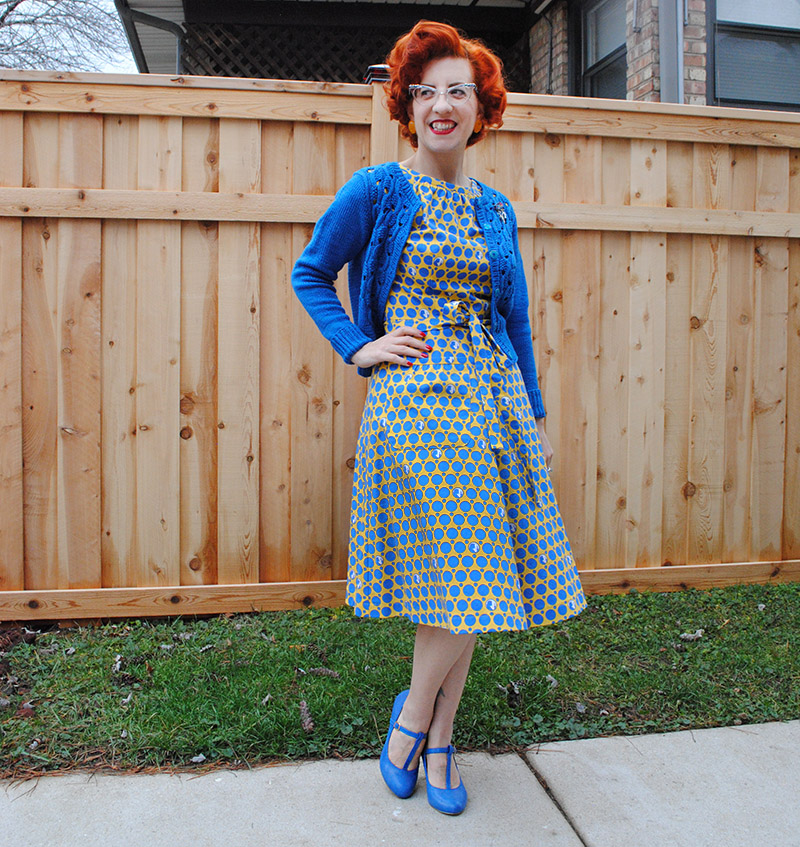 Last but not least, I also made my buttons for the sweater and matching Nancy Drew themed brooch way back in May, too! 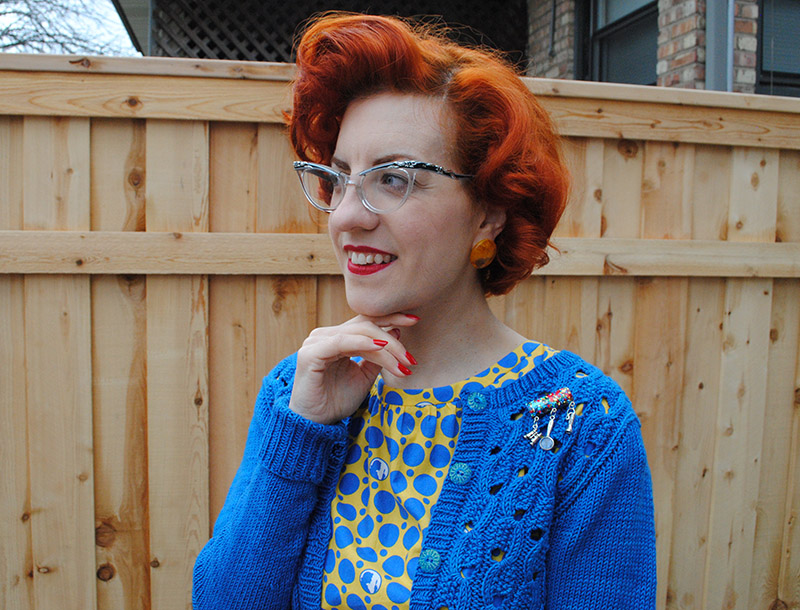 Sorry I don’t have better photos of those but this was the point when I had to run inside due to rain. So that’s all she wrote on this outfit! Overall I’m quite pleased with the whole outfit, even if the individual elements aren’t 100%. Sometimes that’s how it goes!

Oh yeah, one last thing… that fence I’m standing by that you’ve never seen before? That’s our new fence that my dad built last month! I’ll leave you with my “now I can take blog photos in my yard without anyone watching meeee”* happy face! 😉

*except possibly the people in the two-flats across the alley if they’re being peeping toms, ha ha 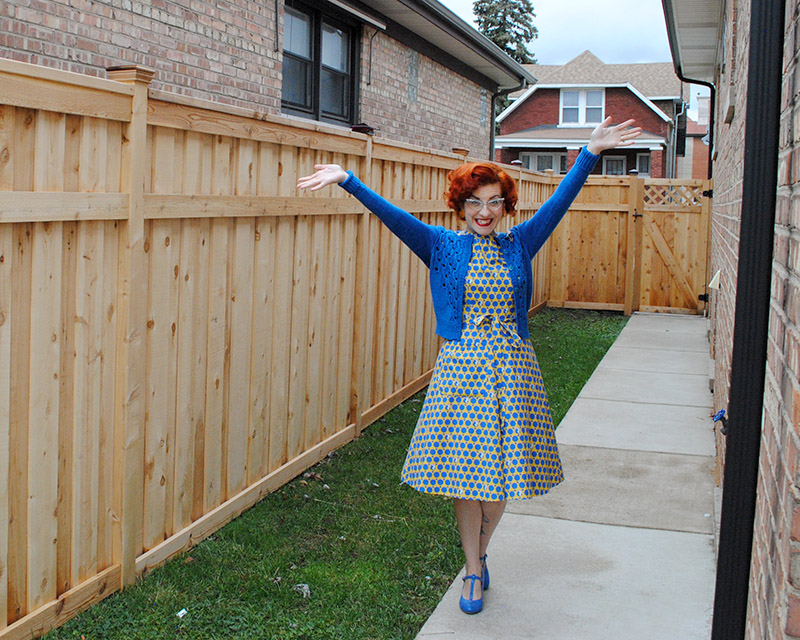