Hey guess what, I wear sweatshirts! 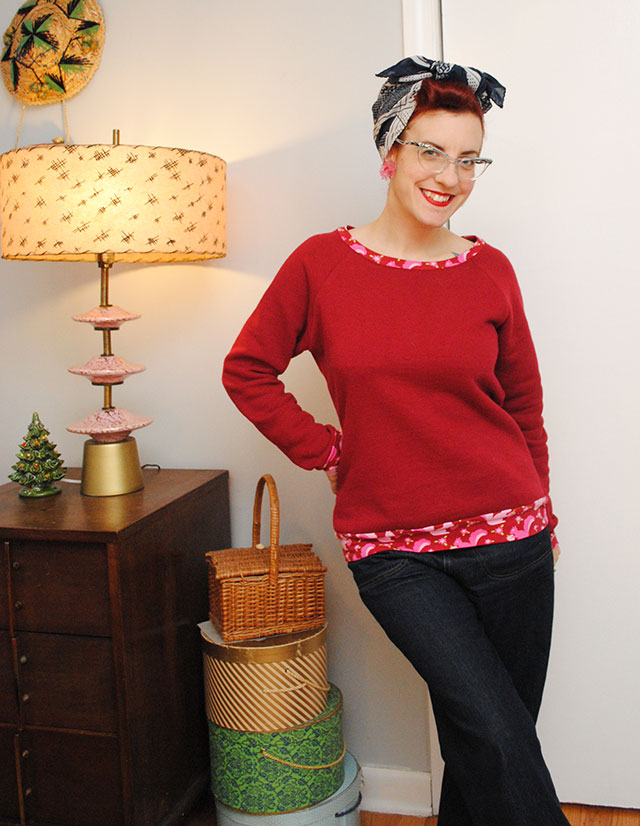 Well I mean, sometimes, obviously. I only have a couple, but they’re both oversized with raglan sleeves… pretty much the exact shape as the Grainline Studio Linden sweatshirt, but with a crew neck. So if any pattern was ever going to get me to sew a sweatshirt, it would be Linden.

And how I came to sew it was a bit roundabout. I was contacted by Organic Cotton Plus to see if I wanted to try out one of their fabrics. Some free organic fabric to try out? Yippee, thanks yes please! I settled on something I hadn’t sewn with, to make it more interesting: French terry. They didn’t have too many colors, but I picked a deep cranberry (the color on my monitor was very true to the actual fabric color). I planned to make a super comfy Moneta dress for lounging around.

Of course, I didn’t actually realize just how thick the fabric until it arrived, so when it did, thoughts of a dress became somewhat questionable. Definitely not impossible, but I thought maybe I should try for something else. It’s amazingly soft and lush, but a bit hefty. I mean it’s thick enough that in order to get two layers under my serger, I actually had to lift up on the front edge of the foot to get it underneath.

French terry is an interesting fabric, where the front side is smooth and the back is loopy, almost like a towel, which makes it nice and plush and comfy, but certainly a bit limiting in terms of what you’d actually want to make with it. 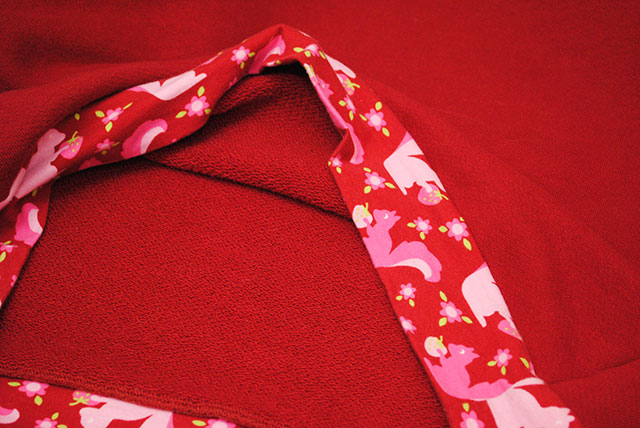 I ran through other things in my mind it would be good for, and then I realized a Grainline Studio Linden sweatshirt! Bingo. And because I couldn’t seem to turn up any matching rib fabric for the bands as called for in the pattern (and self fabric wouldn’t have worked well—too many thick seams), my thoughts turned to an organic cotton jersey I had in my stash from the German brand Lillestoff, because the background color was almost an exact match. But it wasn’t ribbing, and still being a bit of a newb with knits, I popped off an email to Jen to ask if my idea was okay. When I got the green light to try it out, I plowed ahead.

Well come on, it’s a sweatshirt. Might a well have a bit of fun with it, right?! 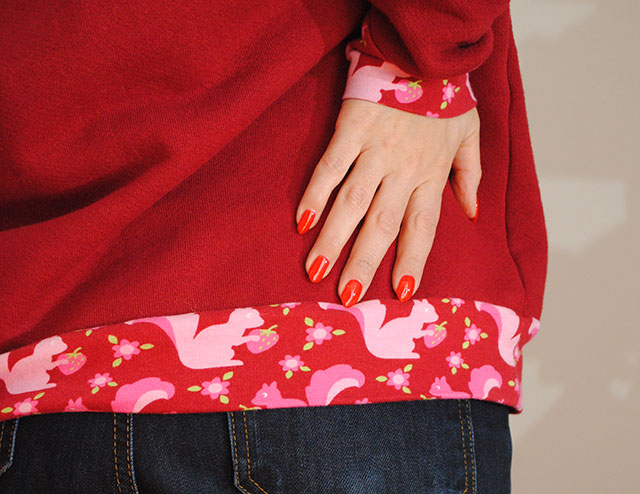 The construction was really straightforward. Other than the Organic Cotton Plus French terry being so thick, sewing with it was pretty much a breeze. I did change rotary cutter blades before since mine was getting a bit dull to cut through two layers of thick fabric, but then I had no problem. It didn’t even shed as much as I was expecting, so other than the thickness it really was not much different than sewing with any of the other knit fabrics I’ve tried so far.

I think at one point I actually said sewing French terry was like sewing with a hug. 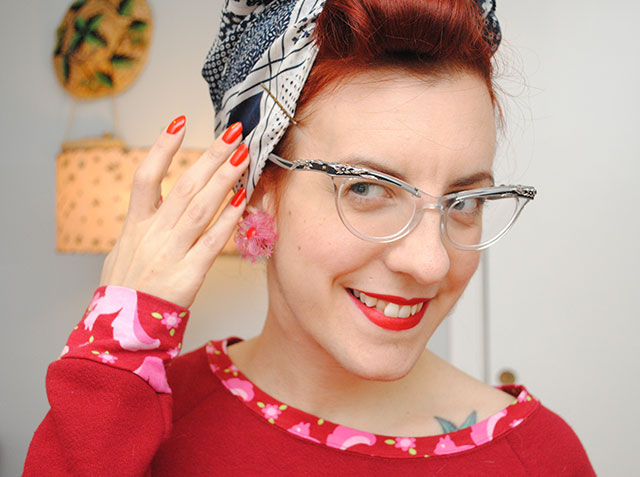 I did run into a bit of an issue with the neck band, but I think it was because my jersey fabric wasn’t as stretchy as ribbing. So even stretched, mine was way too short to ease in the neckline without it causing a rippled mess, so I cut a longer band. I went a bit too long so the neck band stands at attention somewhat, but I decided not to rip it out and re-do it since I actually think it gives it a bit of a cute funnel neck look. I’m calling it a design element. 😉 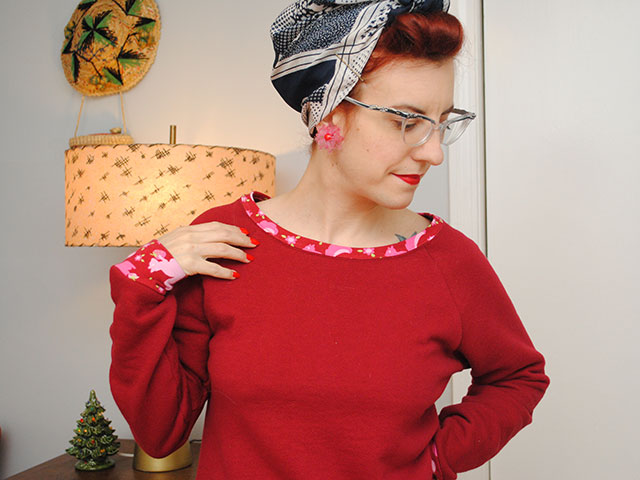 Besides, it’s a sweatshirt with squirrels on it. It’s likely only going to go camping, out in the yard, lounging around the house, and helping blow insulation into our attic (which is happening later today). I’m pretty sure no one in any of those places is going to be asking me about my neckline.

As utterly ludicrous as the pink squirrels are on this sweatshirt, I seriously love that I used them on this project. Sure, maybe this is a sweatshirt your 4-year-old would wear, but I bet it makes you smile! And it definitely makes me smile when I wear it. And since it’s so comfy and warm, I’ve actually been wearing it a lot since I finished it! 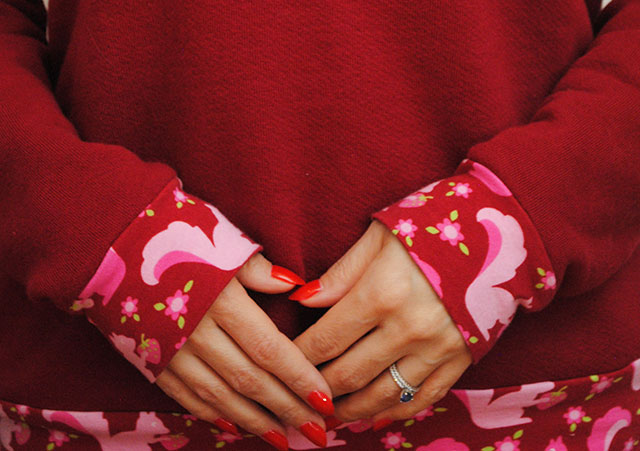 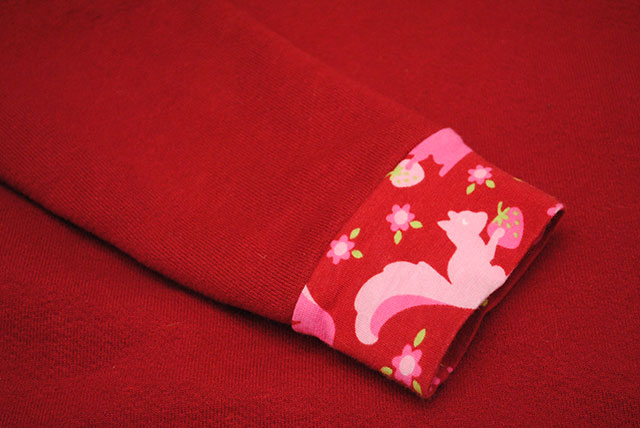 In terms of the fit of Linden, I sewed the size 2 and next time might go down to the 0, which would still leave me with plenty of wearing ease, but for my first one I didn’t want to cut it too close. I did cut 1.5″ off the length of the sleeves and in the future would probably cut another 1″ off, plus a couple of inches on the body since I’m short. But really, no complaints at all. Linden is easy to sew, and easy to wear! 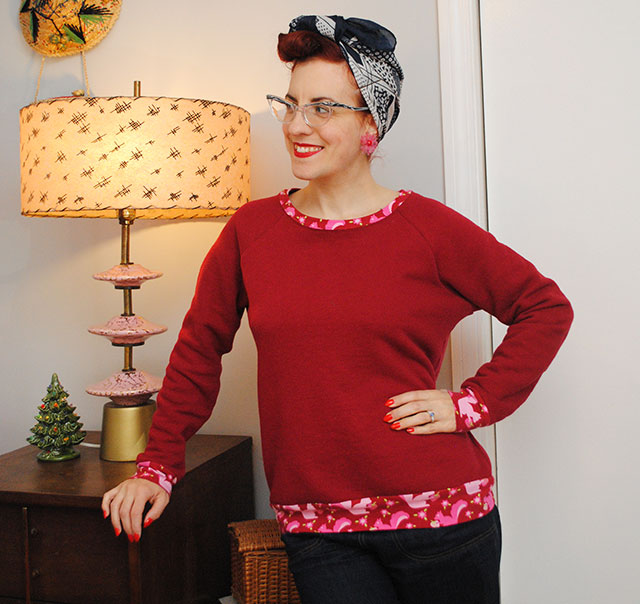 I have to say, I really love the feeling and quality of the Organic Cotton Plus French terry. If you’re looking for a high quality fabric like this, it definitely fits the bill. I’m so pleased that I decided to sew it up into a sweatshirt. Besides Linden, I bet it would be adorable with contrasting bands too for the more fitted and vintage-inspired Enid sweater that Jennifer Lauren just released, don’t you think??

Combined with my silly squirrels, this lovely cranberry terry makes for a perfectly kitschy and cozy Linden. And because the pattern doesn’t use a lot of yardage, I actually think I have enough leftover terry to make a matching pair of sweatpants if I can find a good pattern!

Because I can’t very well just lounge around drinking champagne in my sewing area in a sweatshirt alone, right? Right. 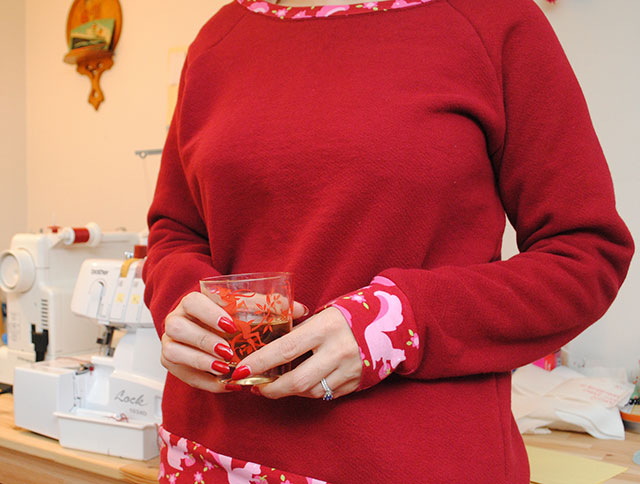 (While I received the French terry fabric free from Organic Cotton Plus, all thoughts and opinions expressed are my own as always!)