If there’s something I’ve wanted to knit for ages, it’s a ski sweater!

Especially when it starts to get really cold out, my thoughts always return to the idea of knitting a somewhat Scandinavian-inspired pullover, but I haven’t made it happen yet. This winter, I’m already wearing my oversized pullovers a lot, so I’ve been in the mood for knitting something in a similar vein. Something you’d typically sit around in drinking spiked cocoa at a fancy ski chalet in a big plush chair by a bearskin rug in front of a fireplace. (If only!) Of course, these pullover styles are also great with cigarette pants, and you know I’m on a kick with those, so it’s a style win-win for me!

I was initially planning a completely different project, but like it sometimes happens, I veered off in another direction and suddenly I absolutely had to knit this vintage pullover on the gal below rightnowthisminuteomg. 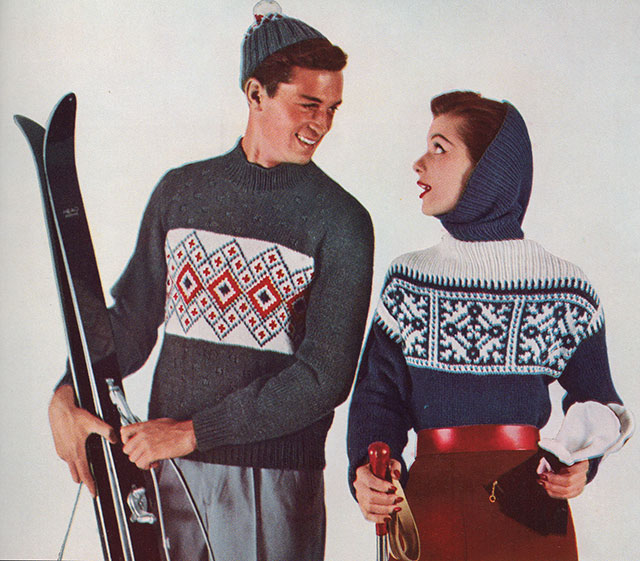 Pretty wonderful, right?? I don’t typically go for turtlenecks, but that’s just silly since my neck is often cold, so I know I should rightfully love them. And how could you not love that you can also style this slouchy turtleneck as a hood, too? Seems like a good way to get me to like them.

It’s a pattern in my 1956 copy of Bernat Handicrafter, issue number 53. Since Bernat is still a brand today I feel iffy about posting the pattern free on my blog, but if you’re interested in finding the pattern yourself, here it is on eBay for $9.50, and on Etsy for $8.00. This one seems to come around a lot, so you can always keep your eyes open if those sell!

One of the things that intrigued me about this pattern is the unusual way the upper body is constructed. You knit the front and back pieces flat, then a few inches above the armhole you join in the round and knit the ribbed yoke (with decreases) and turtleneck in the round to the end. So there’s no shoulder seams at all, like a round yoke where the sleeves are knit separately and joined for the yoke, except this has drop shoulder construction where the sleeves are knit out from the armhole. Isn’t that interesting? At my first read-through of the pattern, where you start the colorwork compared to where the armholes start seems a bit wacky, so hopefully it’ll work out, but if not, I can always just rip back. 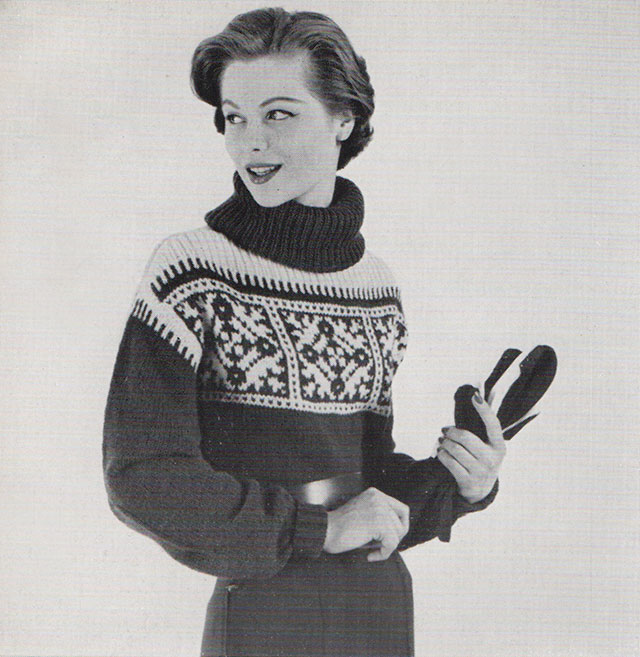 I actually intend to knit this basically straight from the pattern. The gauge is 5 stitches per inch, and I’ll use a grassy green Stonehedge Fiber Mill Shepherd’s Wool worsted that I initially bought for a different project, plus some white Misti Alpaca worsted (which is really natural-colored, not white) I ordered specifically for this, so that the white areas of the pullover will have a nice lovely halo. I got this idea from one of my vintage pullovers, where the white motifs are angora, which I think is such a nice little touch.

But even after I knit this one, I may not be done thinking about ski sweaters yet. I’d love to do another one at some point, too. While many colorwork sweaters that I adore have lots of colors, I’m really feeling the love for the ones with only two main colors. Here are a some pullovers that are inspiring me right now!

One of the styles I’ve always loved includes a contrasting yoke of some sort, especially when combined with a speckled body, which is attractive but also adds a lot of warmth since it makes the entire sweater stranded (except for the rows between ‘speckles’). I really love the plain one on the left below, but the pullovers with animals are always so much fun. Bears! 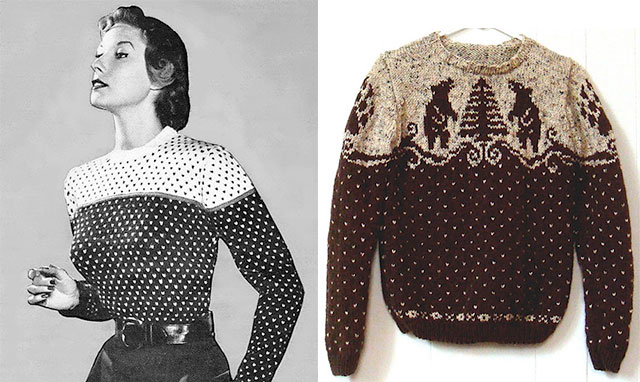 I love that the below pullover features diagonal stripes along with the contrast yoke. Perhaps a bit of a pain to knit, but what a fun take on the traditional! I also like the winter sportsmen on this. I recognize the speed skater on the right and skiier in the middle (although actually, being the astute Olympic fan that I am, I think he might be a ski jumper who’s just landed), but what’s the guy on the left doing? 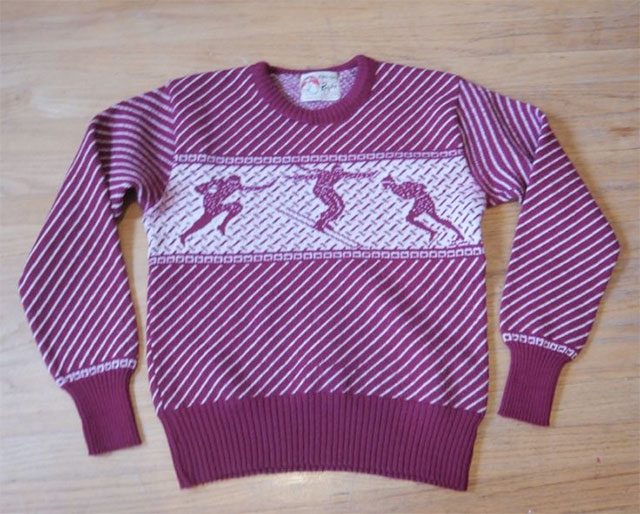 Below are two great examples from copies of Scandinavian-inspired knitting booklets in my collection. The left (a man’s pullover in navy blue and white) is from 1946 and the right (also a man’s pullover, with colors left up to the imagination) is from 1953.

And then I’m always inspired by real life examples of bright and colorful two-color pullovers. And right now, I’m fond of the ones that have large motifs that just pop right off at you, not unlike the type I’ve settled on knitting. The left one below is another featuring a typical animal motif with some particularly great changes in the background colorwork patterns. The right one is a lovely and bold geometric design and I like the bright turquoise, too. 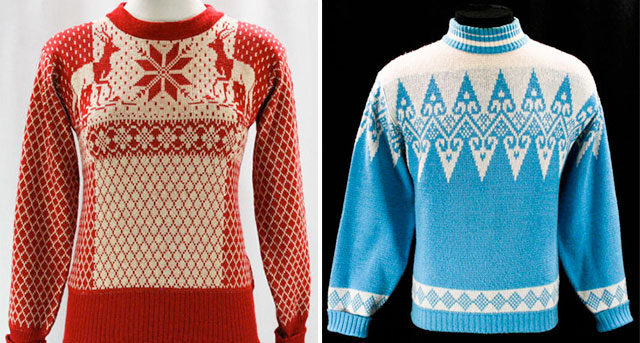 How about you? Are you planning a warm and cozy sweater sometime this winter? Perhaps a ski pullover? Do tell!