I am sorely behind in posting about things I’ve sewn this summer. So much so that I may not even blog about it all—you might just have to see it show up in outfits at some point! And right now, my sewing machine is having issues so I’m going to have to take it in to get repaired. No sewing for me for awhile.

So let’s backup to a month ago when I finished this dress! This is my first Elisalex dress from By Hand London. 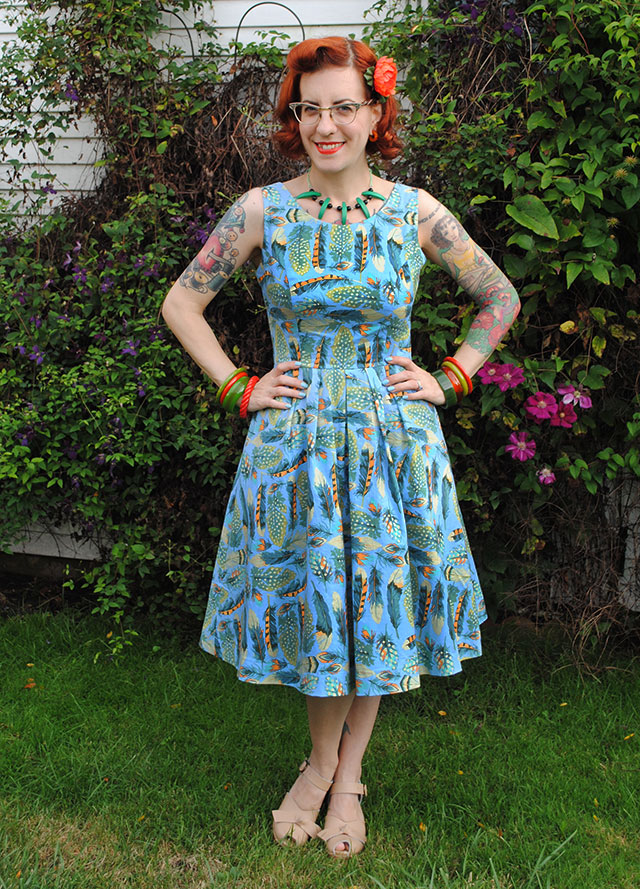 I bought this and the Anna pattern several months ago and can I just say, best thing evaaah to get a personalized note with your order from the By Hand London ladies. What, me gush?? 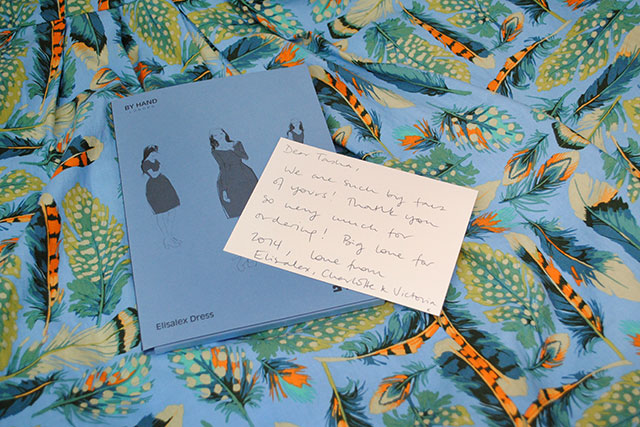 Now I wasn’t really sure what size to sew, since my bust was a US 6 and waist was a US 4. I opted to follow the sew-along advice of Elisalex herself, who sewed a US 4 and did a full-bust adjustment. That’s exactly what I did, and it worked great! The ease in the princess seams at the bust was a bit of a beast to deal with, but it worked. In the end I could probably take the side seams in just a touch or possibly go down an entire size, but it’s comfortable without feeling restrictive. 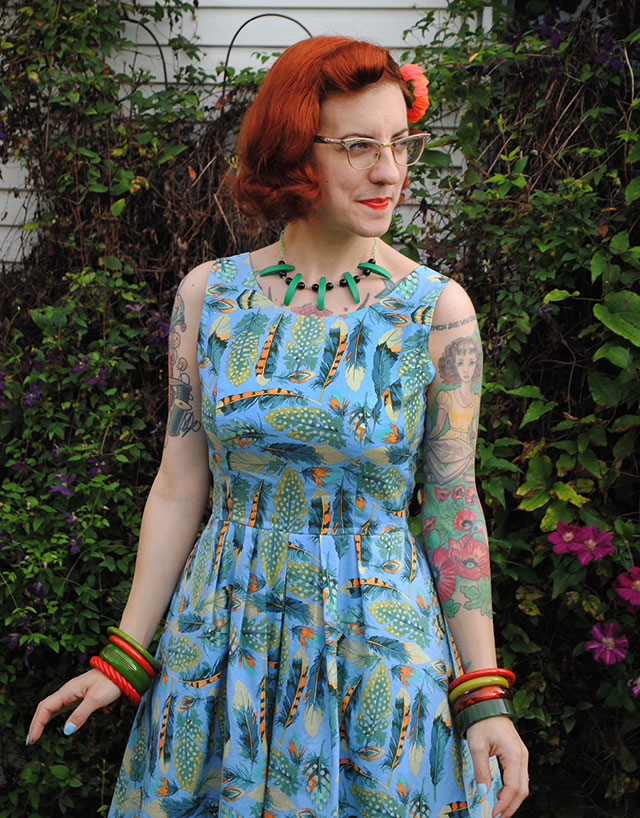 I did two muslins of the bodice. The first was with the FBA and a narrow shoulder adjustment (and trying out a v-neck in the front that I didn’t end up liking).

I knew from the wide neckline and lots of Elisalex photos online that the straps would probably fall off my shoulders, so a narrow shoulder adjustment was in store. But because the straps were so thin, I narrowed the pattern piece on the sleeve side, but then added back the width on the neckline side. I’m really pleased with how that solution worked. 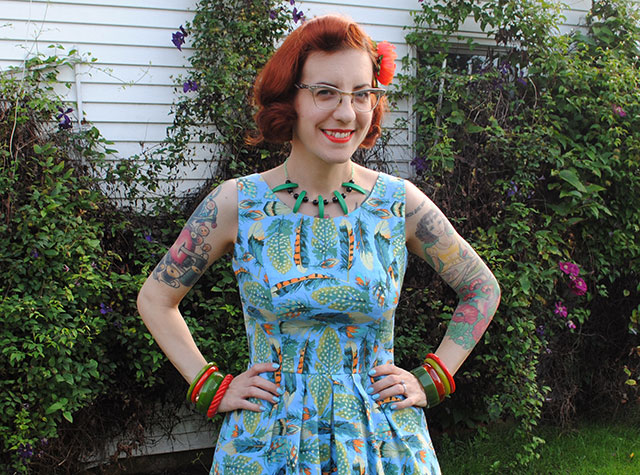 Plus, it meant the straps weren’t too skinny to pull the bodice lining through, which I think might have been a concern otherwise. I went with lime green voile for the lining. It really is whoa mama bright! I did intend to top stitch the neckline but thought about it too long and by that point my machine was out of commission. So eventually I’ll get to it. 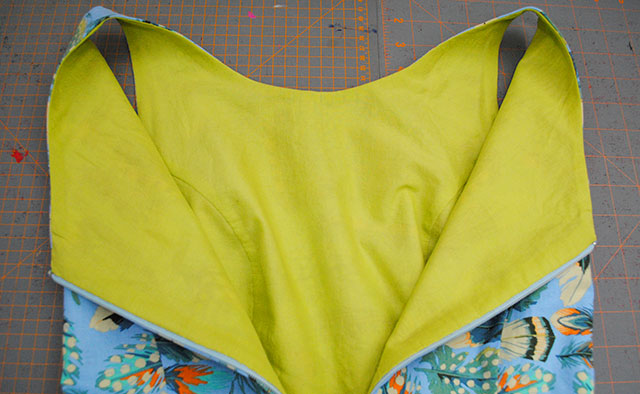 In the back, I wanted a little more coverage than the original deep v-neck, so using the Craftsy class for altering necklines, I raised it a bit. The back was gaping in the first muslin, so that’s why I did a second one. I sliced the back piece about halfway down the neck at an angle towards the lower part of the armhole, overlapped about an inch, and rotated it out at the armhole (which barely changed the armhole at all, probably not even 1/8″). I could probably still remove more as I feel it gaps a bit as I move. 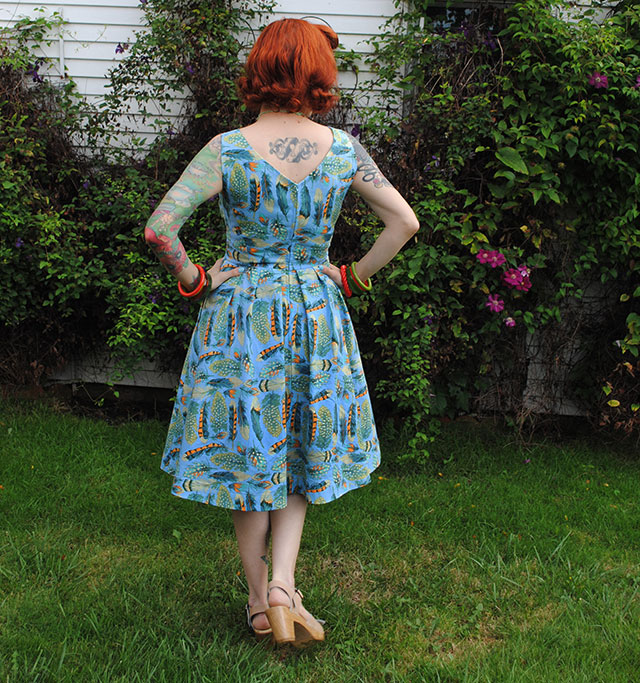 I did a centered back zipper and may I add, I’m so proud of how it looks at the top. Finally got it perfect! If only I could actually tuck the pull into the laps without assistance. Or decide if I like side lapped of center back zippers better. I’ll probably keep flip flopping back and forth. 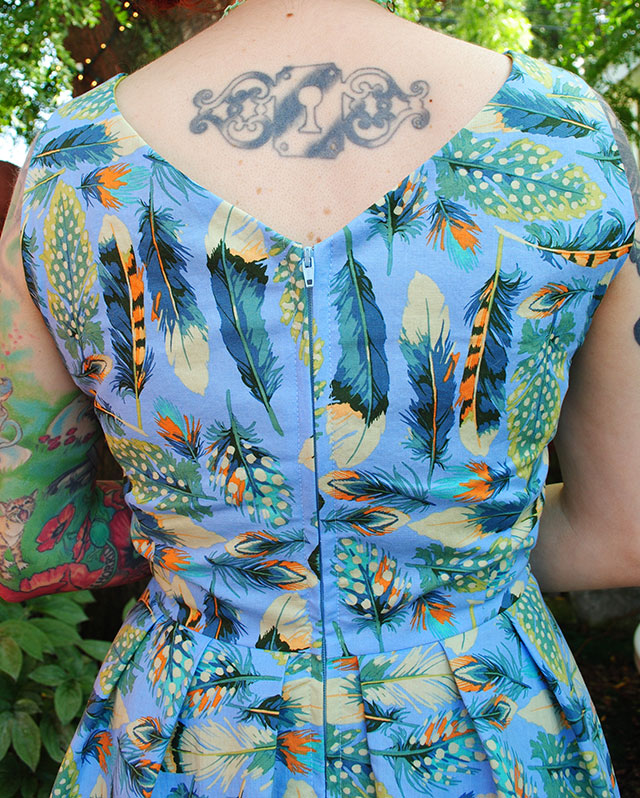 So let’s talk about that fabric for a second, you’re dying to know more, right? I randomly encountered some project online at one point that used a different color scheme of the same fabric, and I pined to Rochelle about it. She managed to track down what it was, Feathers by Martha Negley, and I found some at Pacific Fabrics. Huzzah!

The print feels very summery but I could easily transition this one to fall with the right accessories and layers. I’m thinking about that a lot right now, of course! 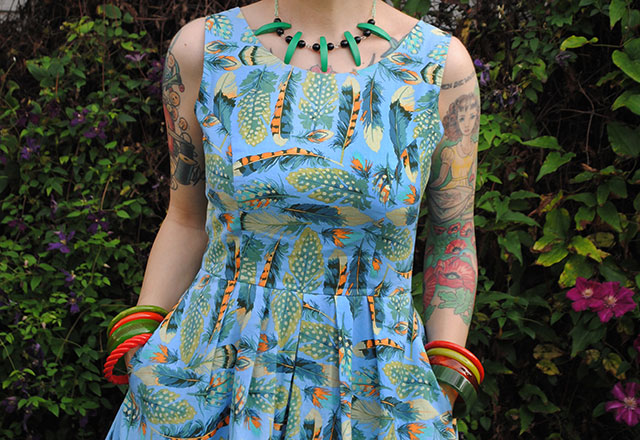 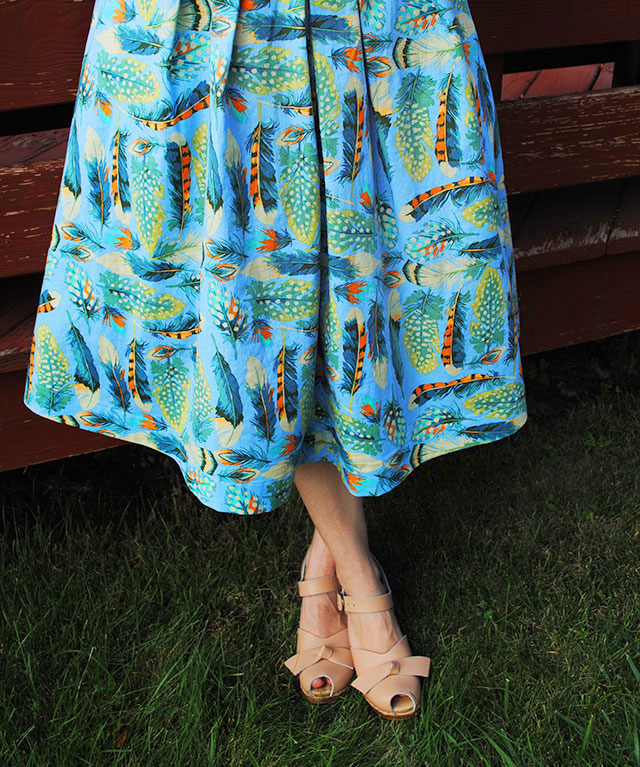 I nixed the tulip skirt from the pattern because let’s face it, can you see me wearing a tulip skirt? Nope. I was going to go with my preferred gathered skirt but took a page from Roisin‘s book and used the skirt from Simplicity 2444, which is pleated. It’s fine… in the end, I don’t love it but don’t hate it. I think pleats are kind of more trouble to me than they’re worth. (As was lining up the pleats with the princess seams in the front… too busy, so you totally can’t tell.) I would have tried a half circle but didn’t have enough fabric.

This skirt definitely called for a petticoat underneath, something I don’t frequently do! But it really makes the skirt look its best. 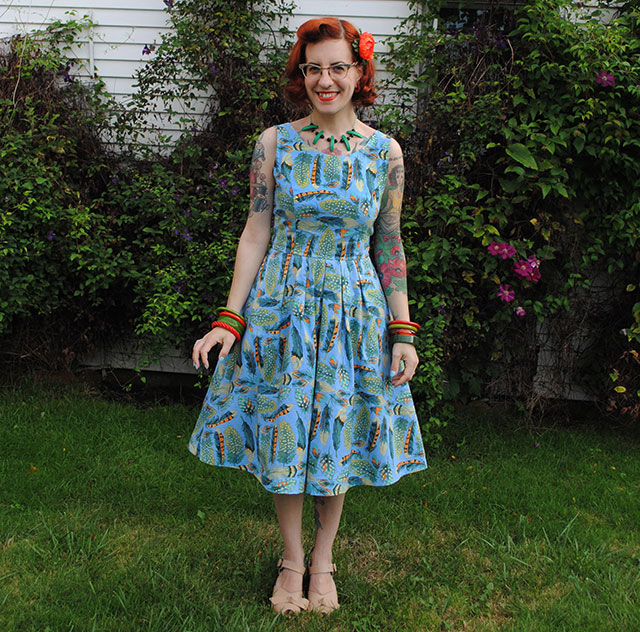 And hey, I had fun with it, while Mel took photos of me being a jackass. You’re welcome. 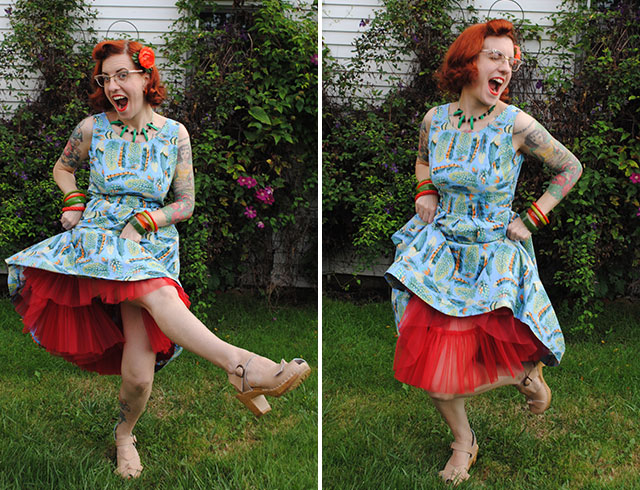 They probably wouldn’t have let me into the Moulin Rouge, huh?

Oh by the way, someone asked me in a previous post about my lipstick, and I forgot to answer! Lately I’ve been wearing Besame Cosmetics (a great vintage-inspired brand if you’re not already familiar) lipstick in Carmine nearly exclusively. It’s a very orangey red which appears a bit more red in most photos, but I think you can see the truer shade in this somewhat bitchyface photo below. I bought this color ages ago and I was meh about it until I dyed my hair red. Now I love it! 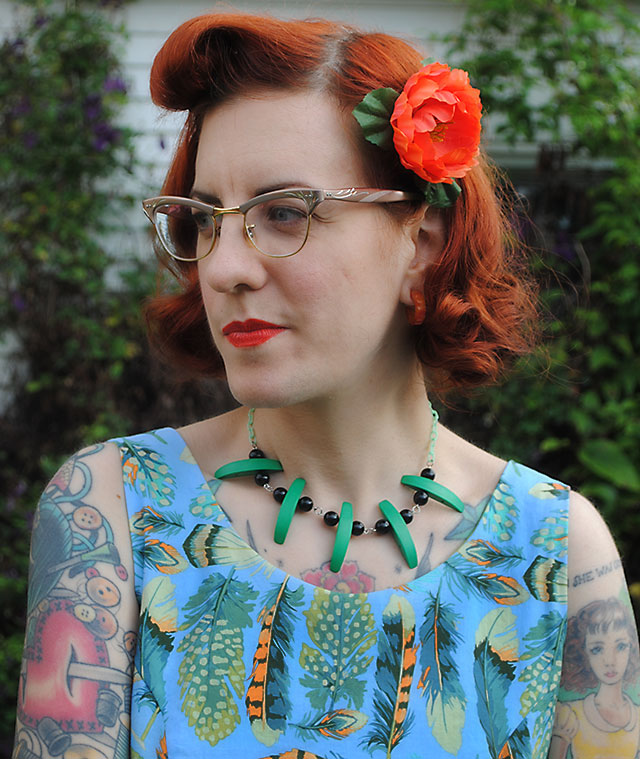 Anyway, I really like this dress, and was actually in the middle of a second Elisalex when my sewing machine started having issues. So expect another one at some point soon in a lovely organic cotton I picked up by Birch Fabrics. In the meantime, I’ll be knitting! (And laying in the grass, apparently.) 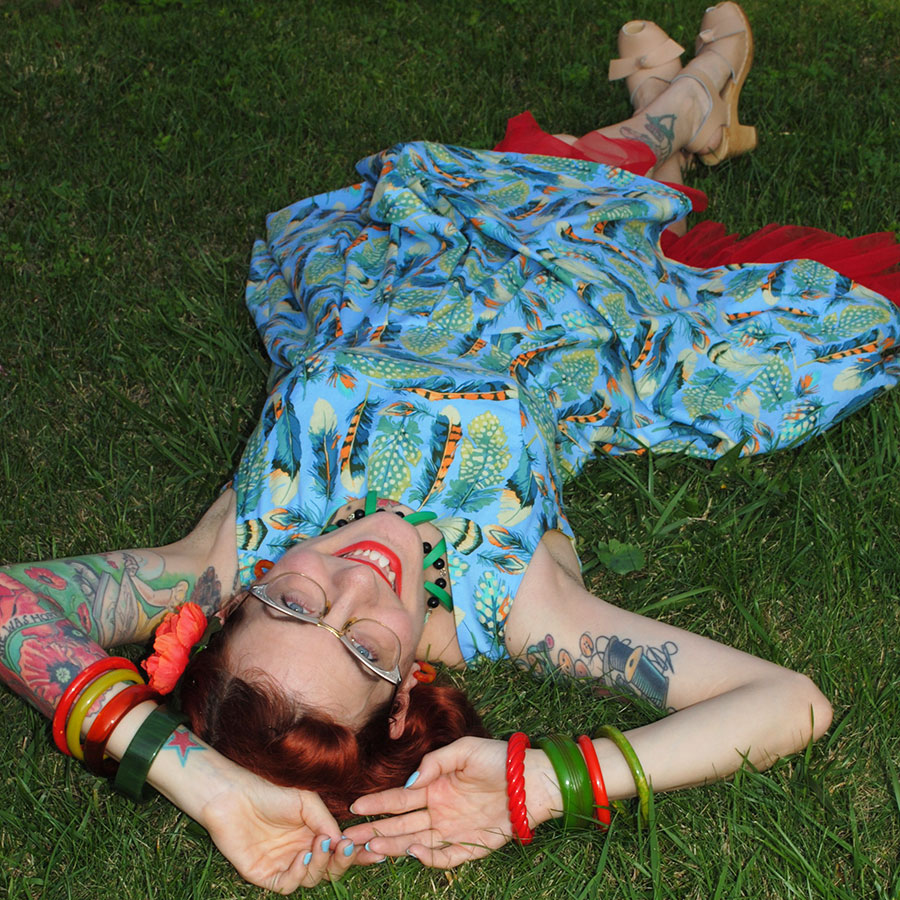