It’s hot and humid out, and I have a brand new fair isle cowl to show you. Just what you would expect in June, right?

What can I say, I knit for the wooly months all year around! 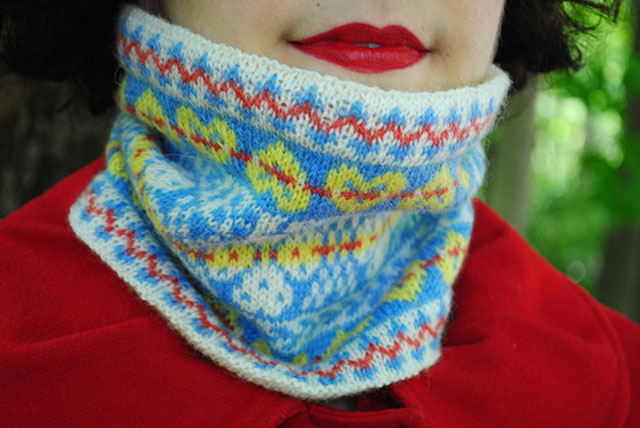 If you’re a knitter, you may have heard that vintage knitwear designer Susan Crawford has recently released a new yarn! It’s called Fenella, and it’s a 2-ply yarn that Susan designed to fill in a gap for vintage knitters. There are many patterns that call for 3-ply yarn, which can be rather difficult to try and recreate with modern yarns, and Fenella can now fit the bill!

Susan spent ages meticulously looking at vintage garments to try and recreate an authentic color palette for Fenella, and came up with 16 gorgeous colors. You can read all about the process on her blog; it’s fascinating! 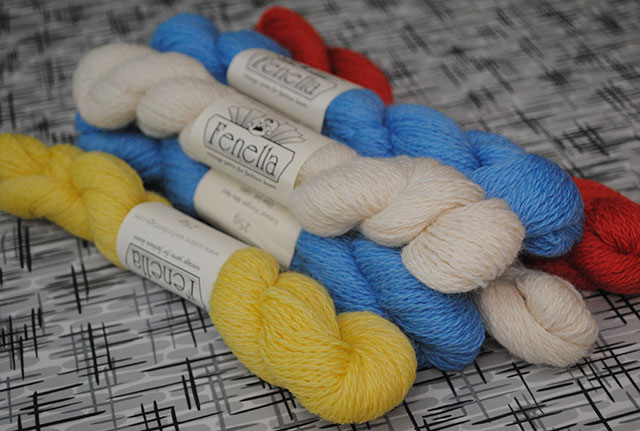 Fenella, like Susan’s Excelana 4-ply/fingering weight yarn (that I used in my Victory beret pattern), is a 70% Exmoor Blueface, 30% Blueface Leicester blend that’s 100% British in origin. It kind of looks like Excelana’s lighterweight, looser spun cousin, and just like Excelana, feels divine. 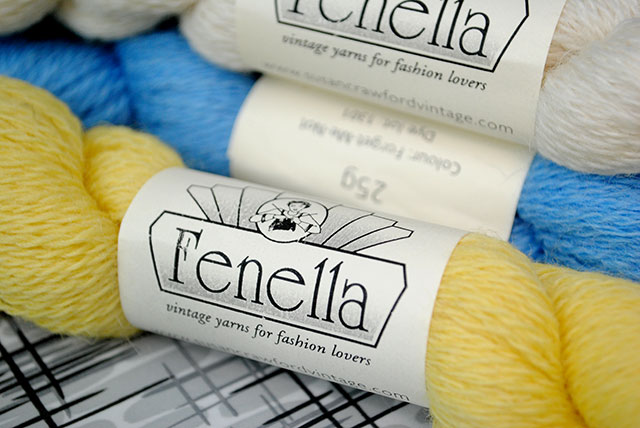 I thought it might be helpful to see a comparison of Fenella with a few other yarns. 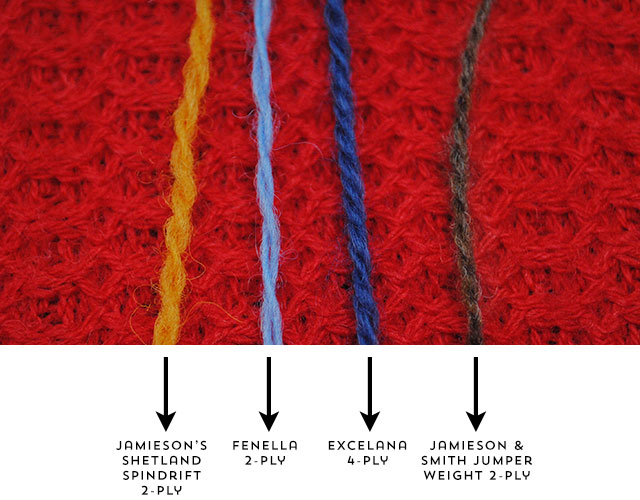 As you can see, Fenella is spun fairly similarly to the two Shetland yarns. It’s not tightly spun, but it’s also not fragile, and very easy to knit with. And similar to Excelana, is has a lovely little halo and is quite soft and comfortable against the skin. 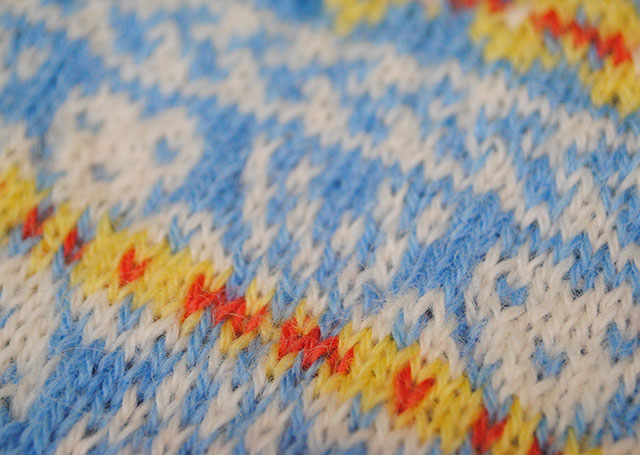 Is it any wonder, looking at the gorgeous palette of colors that Susan came up with, that my first thought would go straight to fair isle? 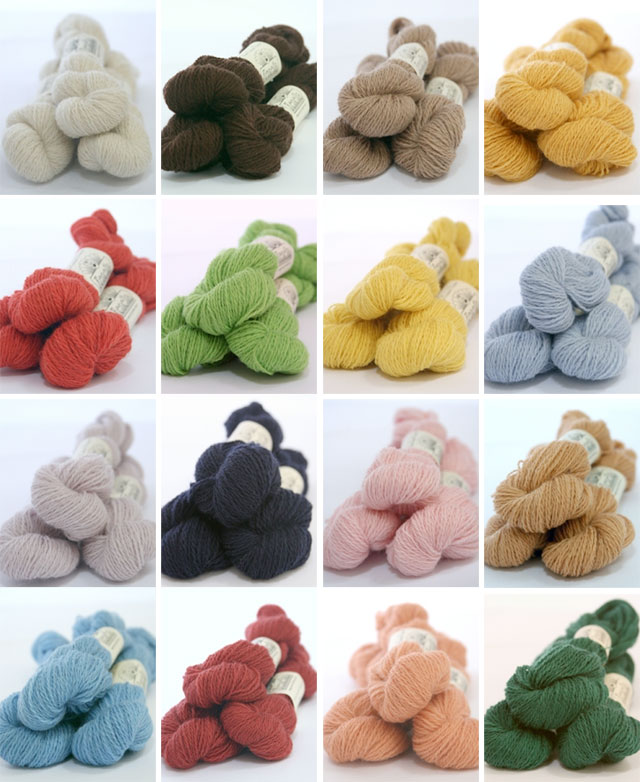 Susan kindly sent me several skeins of Fenella to try out for myself and to knit into a luxurious little something. So I whipped up a cozy neck cowl with tidy facings on the top and bottom edges. 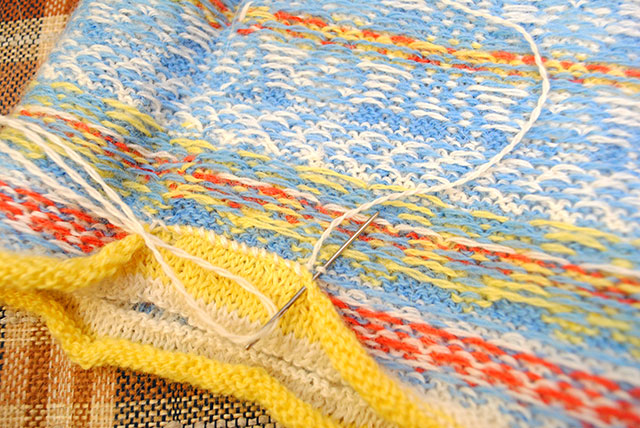 (I’m using white to sew it shut, as the row I’m sewing it to on the front side is white) 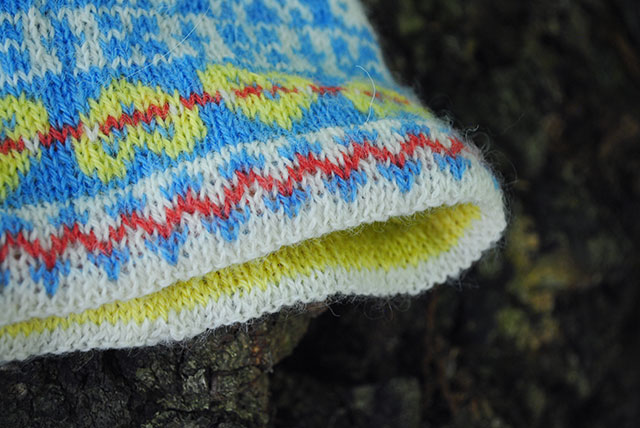 One of the beauties of this yarn is its versatility. You can knit it at a looser gauge (like in Susan’s new lace cowl that uses Fenella, Cresta Dell’Onda) or knit it at a tighter gauge, and in both cases the resulting knitted fabric is wonderful and lightweight. I swatched a few different gauges and liked them all.

The finished cowl is dreamy. Light as a feather but warm, and feels soft and cozy against my neck. 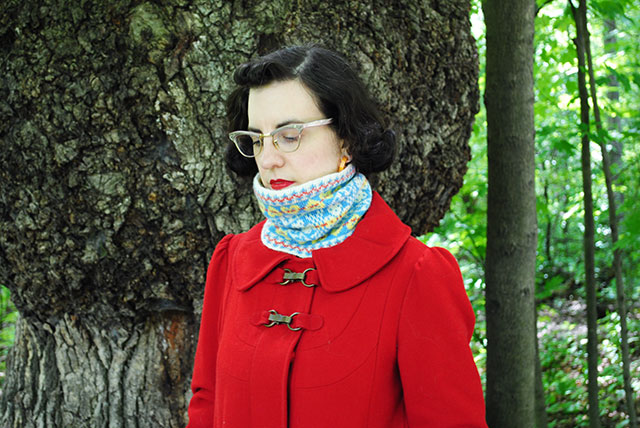 When I was talking with Susan about Fenella and trying to come up with what I wanted to knit it up into, I had a little spark of an idea to design a relatively low-contrast fair isle cowl with a few motifs that stuck to a loose theme. I knew I’d knit it up for myself, but wasn’t sure if I was going to actually want to turn it into a published pattern. But once all was said and done, I was very pleased with the results, so a pattern is in the works. You’ll be seeing more of this cowl later on in the year!

If you’d like to try out Fenella yourself, you can purchase it directly from Susan Crawford’s shop. I can’t recommend this yarn enough! I’m already brainstorming other projects for Fenella. I’ve been dreaming of a couple of two-color stranded cardigans in my wardrobe for ages now, but haven’t had the time to start one. Knitting a lightweight, warm and airy fair isle cardigan in Fenella? I’m definitely going to have to make that happen!