A few months ago Kate Heppell, editor of British knitting magazine Knit Now (you may recall I was in an issue last winter!), released an adorable Fair Isle hat pattern called Fox Isle. As soon as I saw it I knew I wanted to knit it up immediately, and that’s exactly what I did.

Except you’re only just seeing it now since I didn’t photograph it until the day before most of our snow melted last week. How’s that for a deadline! 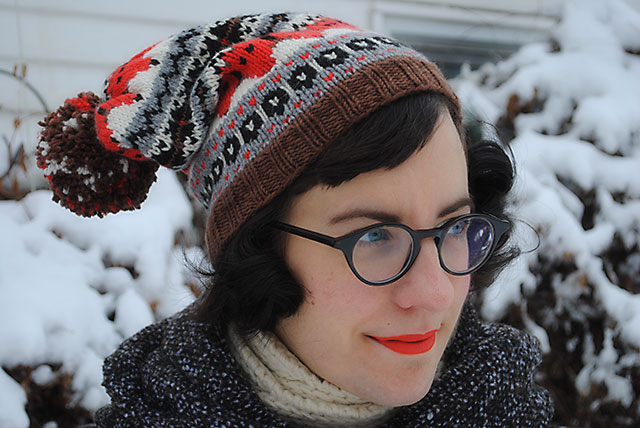 If you look at the pattern on Ravelry, you’ll see I made a few changes, but not much. At the time, I really needed a project where I could just start knitting and zone out. And how that works out to be a project with five colors, changing crown decreases to accommodate a longer hat, a gauge change, and impromptu extra pattern thrown in to add length… I don’t know. I’m crazy. What can I say, it made sense to me! 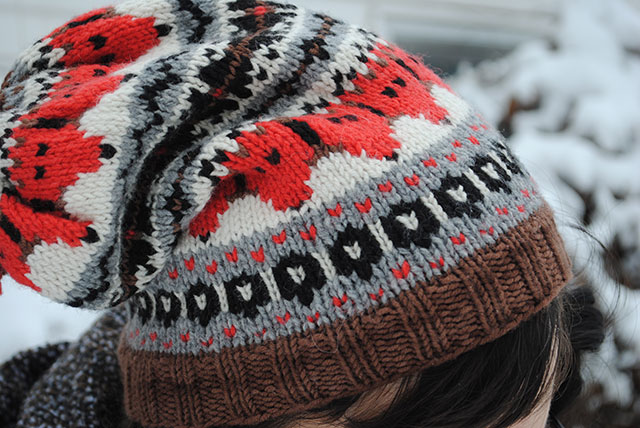 And before you ask, since I know some of you may… coral yarn in just the right shade seems hard to come by, and sadly I have to report this one is no longer produced. It’s St. Denis Yarns Boreale in Spicy Rose… sigh, I loved Boreale for color work. Fortunately if you’re looking for Spicy Rose, looks like kpixie.com still has some. 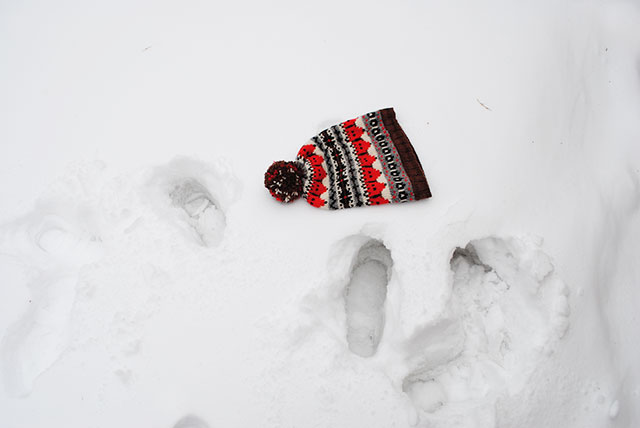 Ironically I chose coral for the adorable little fox motifs to match a winter coat… that I don’t have. I’d purchased it and was awaiting its arrival from the UK at the time, except I finished the hat before the coat arrived. But then when the coat did arrive I wasn’t in love with it, so I returned it. But hey, the foxes are still the perfect shade to match my coral Lime Crime Velvetine lipstick in Suedeberry. 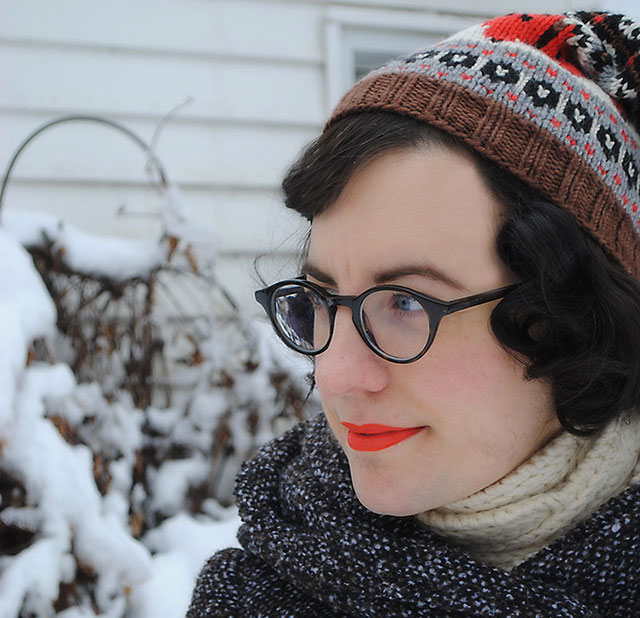 My version of this hat is almost comically long, but I love it. I don’t have anything like it, and I can stuff it way down on my head in the bitterest of weather and still have plenty of room for it to prance about on the back of my head. I knew it was knitting up quite long and I even needed to throw in another tiny peerie chart in there so I could replicate Kate’s background color changes even though I was adding in a second chart of foxes, so I just ran with it. 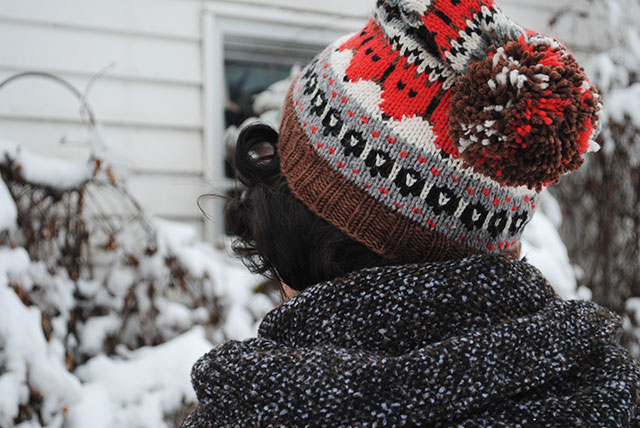 And of course it needed a big silly pom pom. Right? Right. I mainly used the brown but threw in a bit of the coral and natural, too. 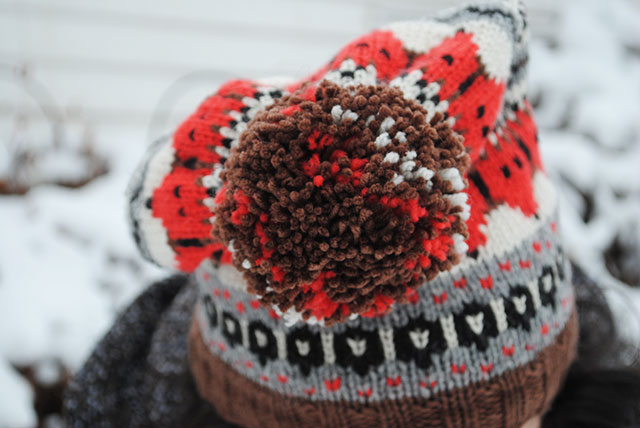 I’d highly recommend the pattern. It’s a perfect Fair Isle beanie / watchman’s cap pattern, without all my extra-silly mods thrown into the mix. The charts are repetitive enough to be easy to remember for less advanced stranded knitters, too! 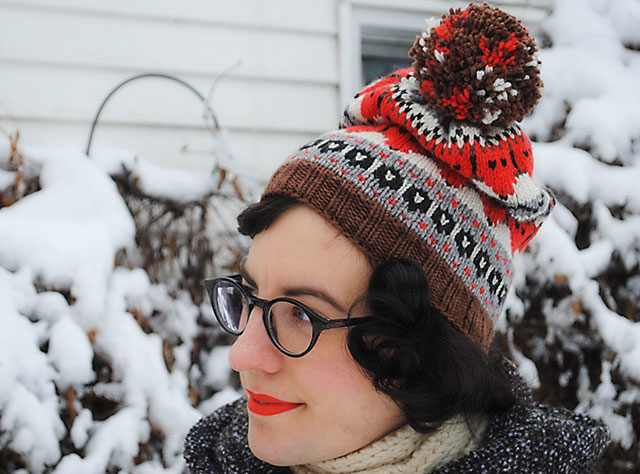 You may or may not know that I’ve been taking a break from fair isle since before we rang in the new year, which is quite some time at this point. I’ve been trying to give my shoulder a rest, which had a couple of bad flare-ups in the fall due to stranded knitting (I only carry yarn in my left hand when doing fair isle, and my left shoulder does not like that). I’m hoping in the next month or two to get back into it slowly. Seeing projects like this make me miss it so! 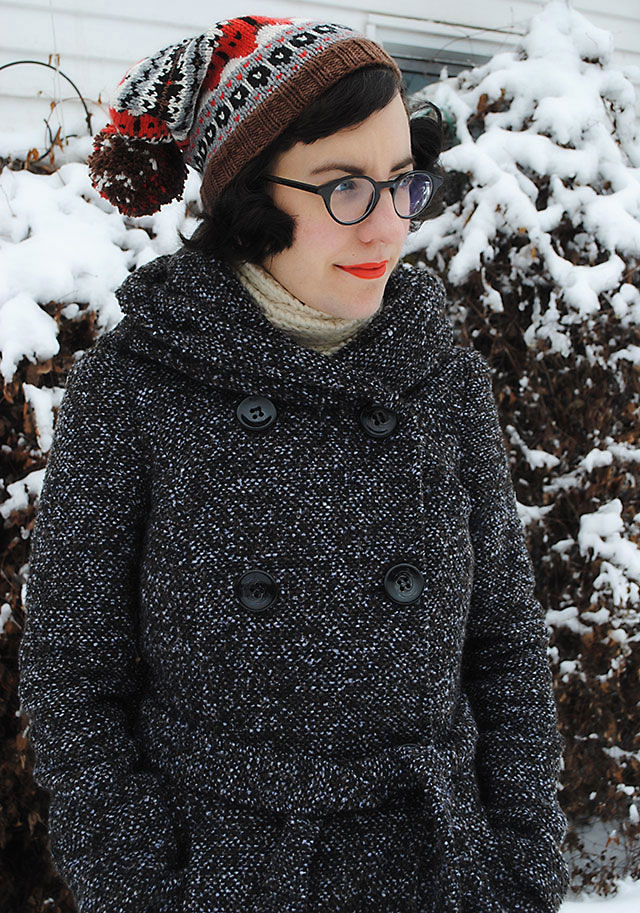 Anyway, as we’re (hopefully) (finally) finishing up the worst winter ever, I’m happy to report my Fox Isle hat will be happily tucked away until next winter. 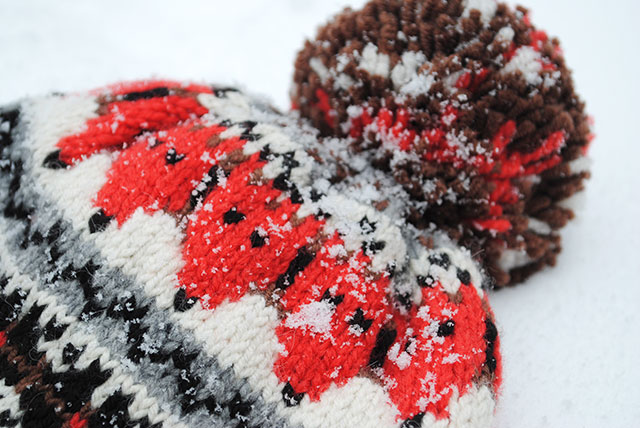 Good bye, little foxes! No offense, but I hope I don’t set eyes on you again for MANY more months!