Friends, it’s been awhile since I’ve completed a knitting project, and I have sewing to blame. While I’ve been busy filling out my wardrobe, my knitting has suffered, which is unusual for me and a side effect of sewing I don’t like! So I may cool down the sewing a slight bit so I can focus on my (new) current knitting project. After I wipe a couple of projects off my plate that involve tutorials, that is… stay tuned!

That aside, I knew I wanted to knit my friend Elisa something for her birthday. She’s an extremely generous person, a talented knitter and masterful quilter. And by masterful, we’re talking she once sewed a quilt of the London Tube system that is accurate. I know!

I knew I wanted it to be a hat, but it couldn’t be any old hat. 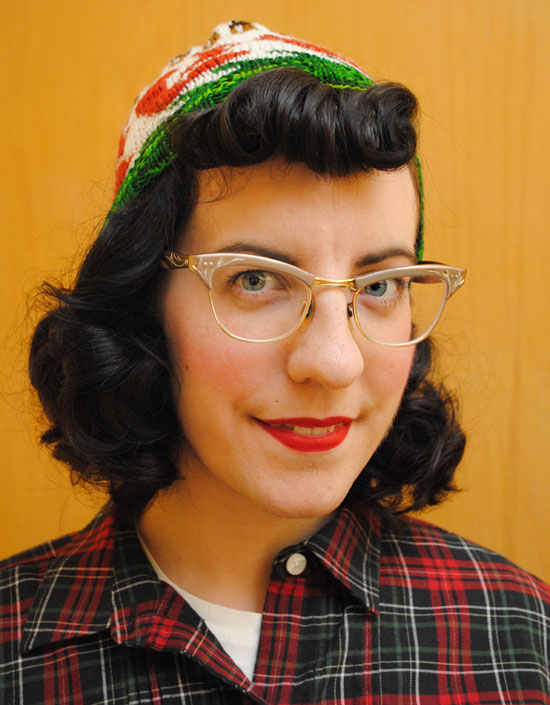 (Do I look like a lumberjill in this hat and the plaid shirt or what? Try taking photos for a winter hat when it’s summer and the outdoors are all lush and full. So we’ll pretend it’s actually too cold to take photos outside, deal? This one’s for my Australian readers who are dipping into winter!)

Now, I said this wasn’t any old hat, so here’s the story. Elisa isn’t a huge fan of squirrels. She and her husband live a neighborhood over from us, and their street is much more tree-lined than ours, so they have a lot more squirrels than us. When I saw the new Squirrels hat pattern on Knitty, I knew that’s what I was going to knit… with a twist. 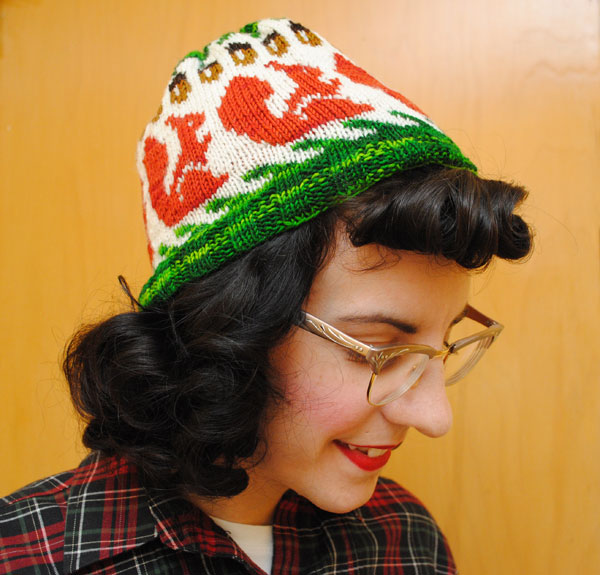 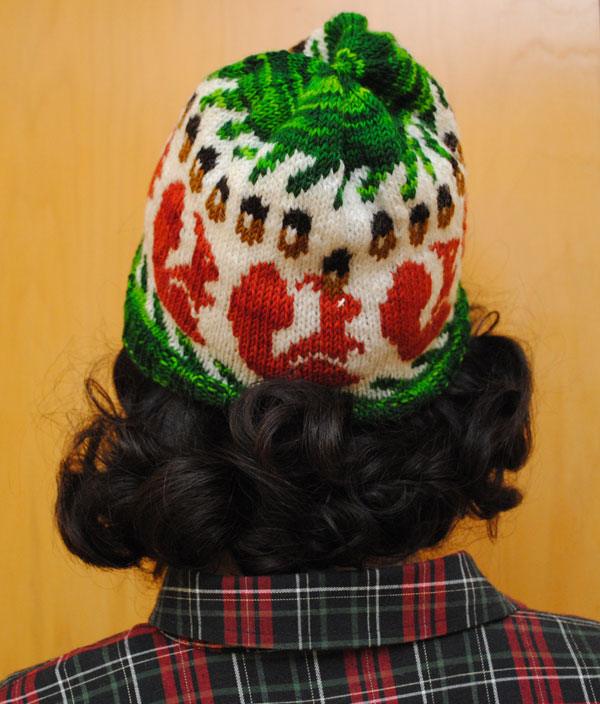 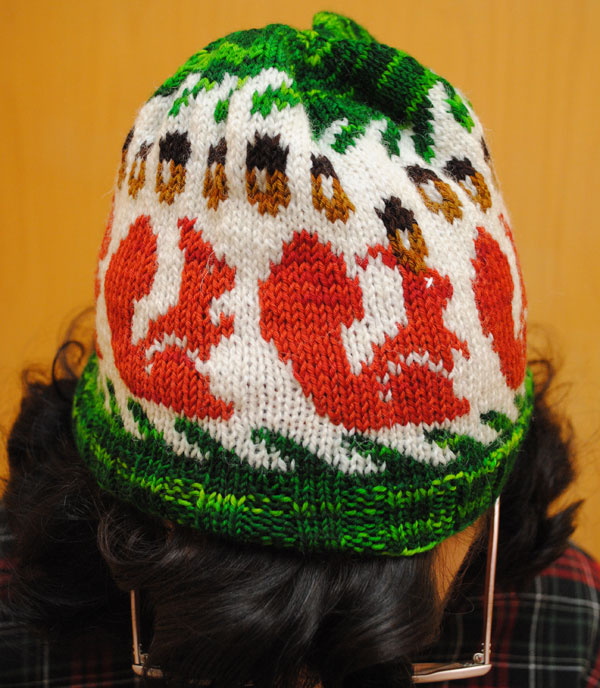 How did I do it? I transferred the chart into Excel, and made a few tweaks. I turned the hands down, the ears down, and lowered the acorn. I wanted the eyes of the ‘bonked’ squirrels to be Xs instead of one knit stitch, so I omitted their eyes and stitched them on later. The hat is knit in the round but because of the two lowered acorns, I did those in intarsia. They’re small, so I just twisted the yarn and carried it back to the beginning of the acorn in each successive row. That just took a little extra flattening when blocking. 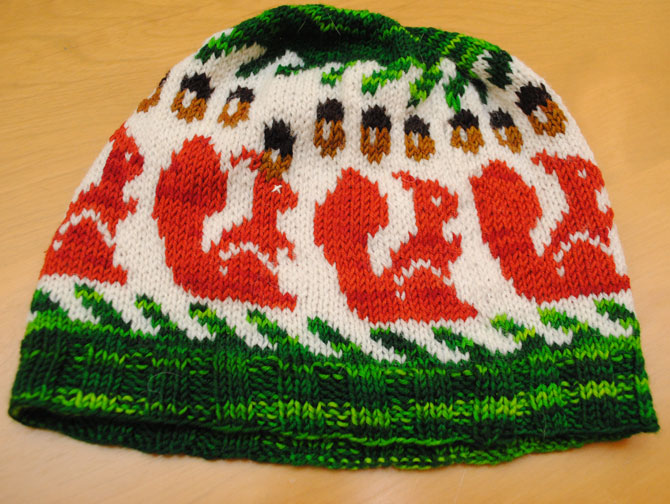 When knitting a hat in the round, many people use a 16″ circular needle. I hate small diameter circulars though, they make my hands cramp up. So I opt to split my stitches between two circular needles, as I’ve probably mentioned before. There are lots of tutorials online, but I think this is the one I used back in the day. It’s an easy technique—a bit fiddly for the first couple of rows, so if you find it all flopping around, try putting a pillow on your lap. 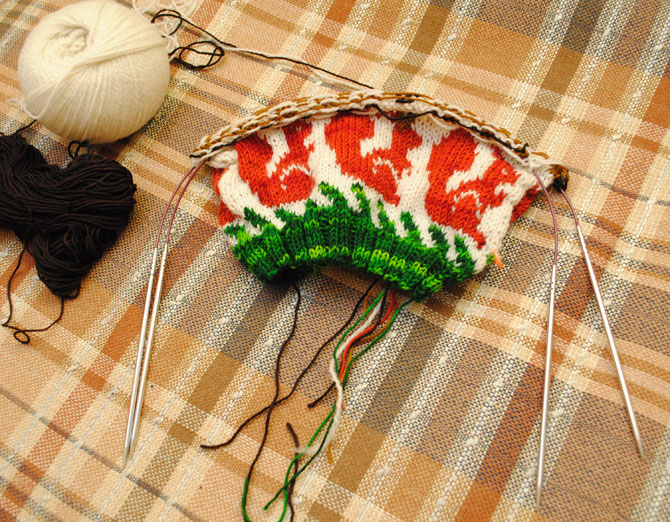 Now if you knit with two circulars at a looser gauge and with two colors, you may find the stitches between your two needles get loose and crazy looking. That’s okay, because you don’t want them super tight or you’ll end up with a tight float between the needles and that can’t be fixed. You can totally fix it if they’re too loose, though.

Take a look at the difference blocking made below!

Moral of the story: block your knitting. It really does make a difference.

Anyway, I’m wildly thrilled with this hat. Oh, how I love novelty patterns! 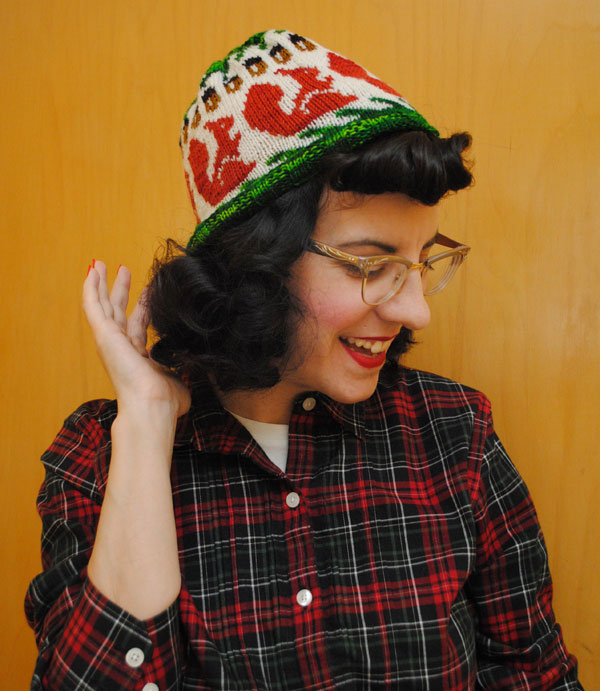 And I also discovered I’ve been missing out on something. I’ve avoided beanie or toque style hats as I almost always have some sort of curl or roll in my bangs. What never occurred to me until this photoshoot was I could wear this style behind my bangs like I sometimes do with berets, especially if the hat isn’t too tight as to crush my hair. This opens up a whole new world of hats for me in winter! There are plenty of cute vintage and modern winter ski cap patterns!

Worthy of an après-ski moment, no? 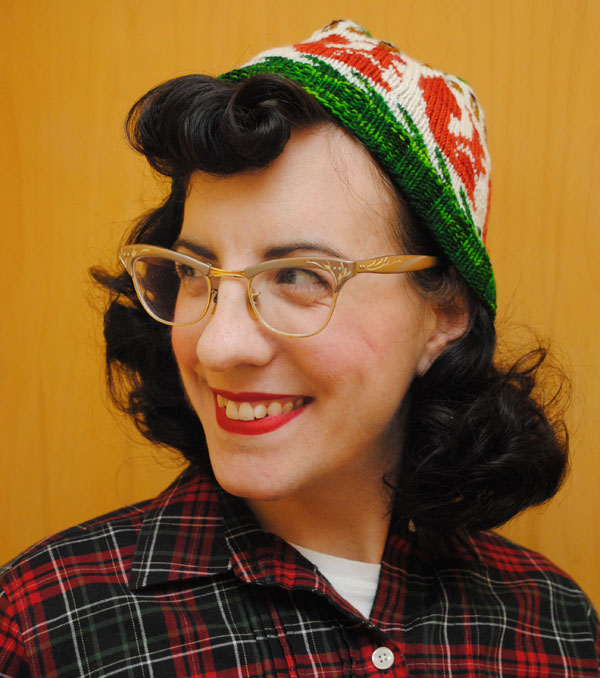 This hat has now gone on to live with its new owner, Elisa, but you better believe you’ll be seeing more novelty hats from me in the future!